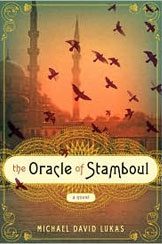 Booklist called this “a delightfully quirky magical mystery tour via an appealingly quirky heroine.” Exactly. It is the late 19th Century in a small town on the Black Sea. Eleanora Cohen, an extraordinary little girl, sneaks on board a ship taking her father to the great capital city of Stamboul. Once they arrive, mystery and intrigue swirl around them. Before long, Eleanora is not only presented at the court of the Sultan, but she becomes one of his most important advisers! This is the kind of book that transports you to a place you’ve never been, introducing you to people you’ve never met, telling you a story you’ve never heard. It does what a novel is supposed to do, and it’s a wonderful debut from an author to watch.