How Many Types of Monkeys Are There in the World?

We're not monkeying around: Find out all the fascinating facts about these incredible animals. 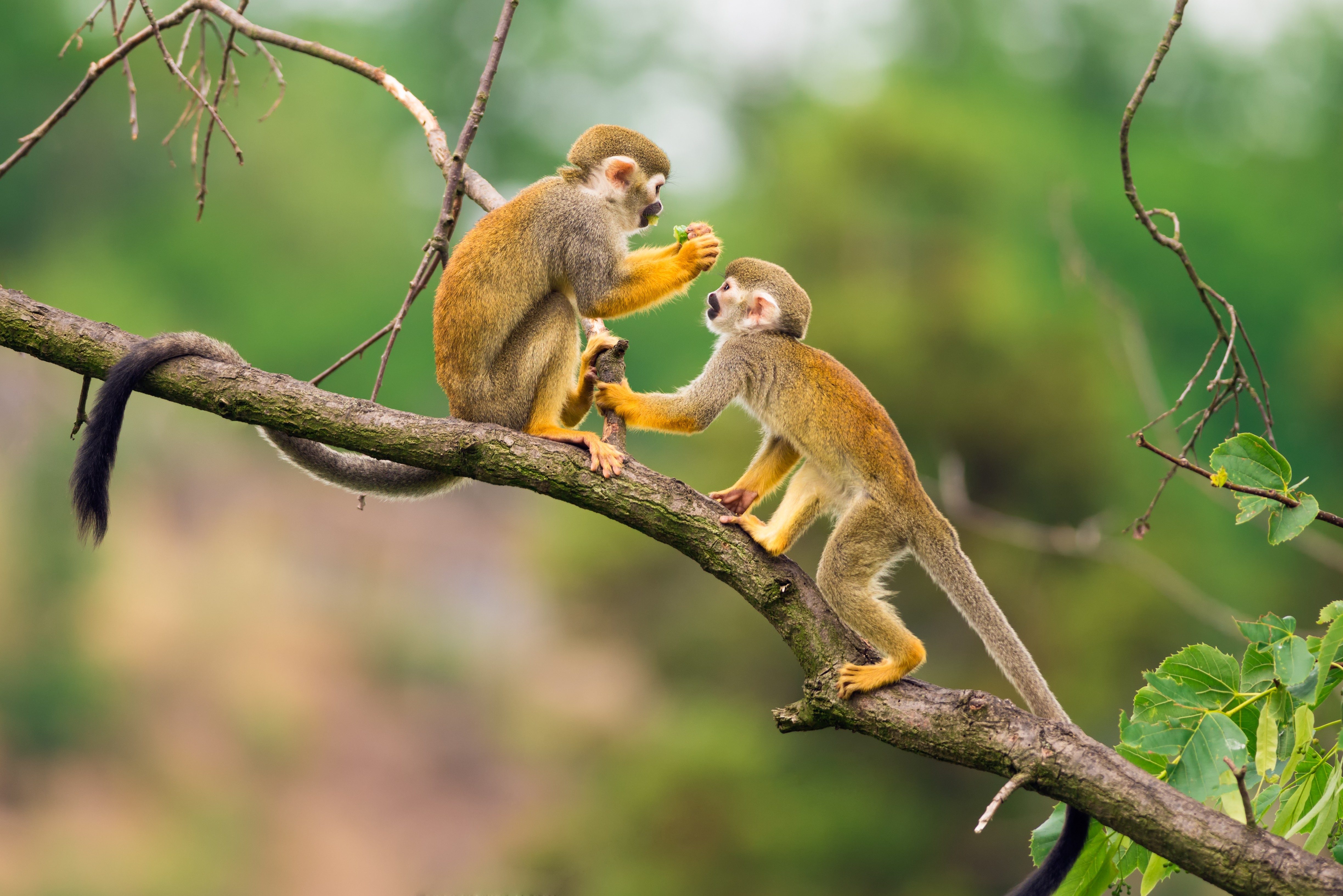 What is a monkey, exactly?

We think we know monkeys for their playful behavior, their swinging around the jungle, and oddly familiar expressions (we're related to them, after all). But how are all the types of monkeys different from other primates, which include great apes like gorillas, orangutans, and chimpanzees—and us? "I think one of the simplest ways to define a monkey when compared to other primates is to look to their tail—monkeys in a general sense encompass numerous tailed primate species," says Victor Alm, zoological manager, primate unit, Saint Louis Zoo. "Other primate groups such as lemurs [part of the "prosimian" group, which is considered more primitive than monkeys] do have tails, but apes do not." Monkeys also tend to have relatively flat and short faces, move with all four limbs, have hands and feet typically with a big toe or thumb, and live in social family groups, he says.

"Fun fact: Apes could properly use the monkey bars, but most monkeys can't because arm-to-arm swinging requires more shoulder mobility than monkeys have," says Michelle Rodrigues, PhD, a biological anthropologist at the Beckman Institute at the University of Illinois. Apes have more upright posture and fully mobile shoulder joints, she says. Monkeys also differ from nocturnal prosimians by having traits like fully enclosed bony eye sockets that help them see better during the day. Primates of all stripes make for some of the most amazing animal photos. 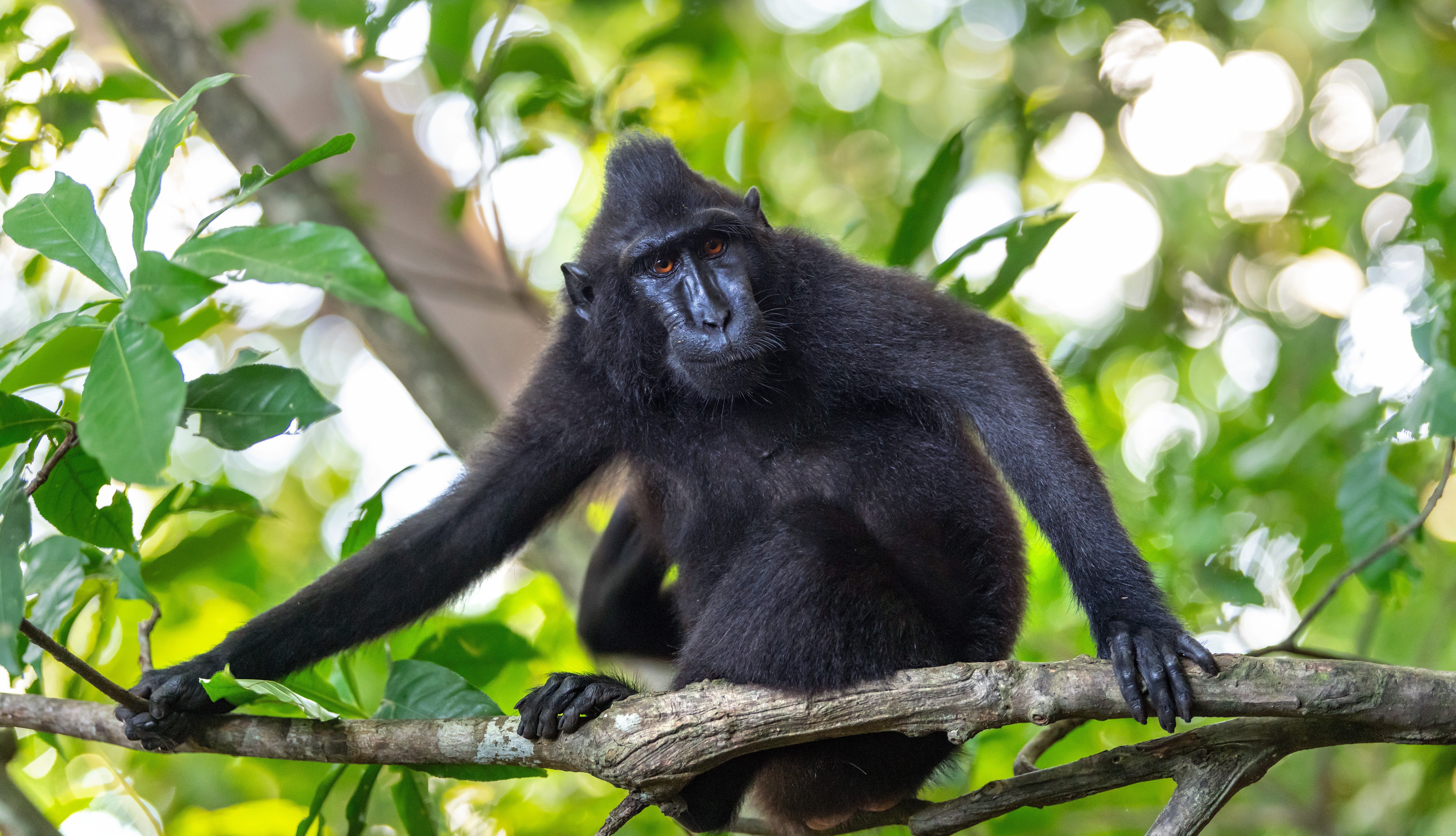 OK, so now that we know what a monkey is, exactly how many types of monkeys are there? "Monkeys are broadly divided into Old World species—160 species, and New World species—174 species," says Jessica A. Mayhew, PhD, assistant professor of anthropology and museum studies, and director of the Primate Behavior and Ecology Program at Central Washington University. So that's 334 species altogether! Alm says Old and New World monkeys have different kinds of noses, with Old World monkeys having narrow noses with downward-facing nostrils. Dr. Rodrigues says their teeth and vision differ, with Old World monkeys having fewer teeth and color vision.

As their name suggests, Old and New World monkeys live in different geographic regions, with Old World monkeys in Africa and Asia, and New World in Central and South America. Dr. Rodrigues points out that many monkey experts are replacing the terms "Old World" and "New World" with African/Asian and Central/South American to reflect a less Euro-centric and colonialist point of view; we'll use both interchangeably here. Find out how many orangutans are left in the world. 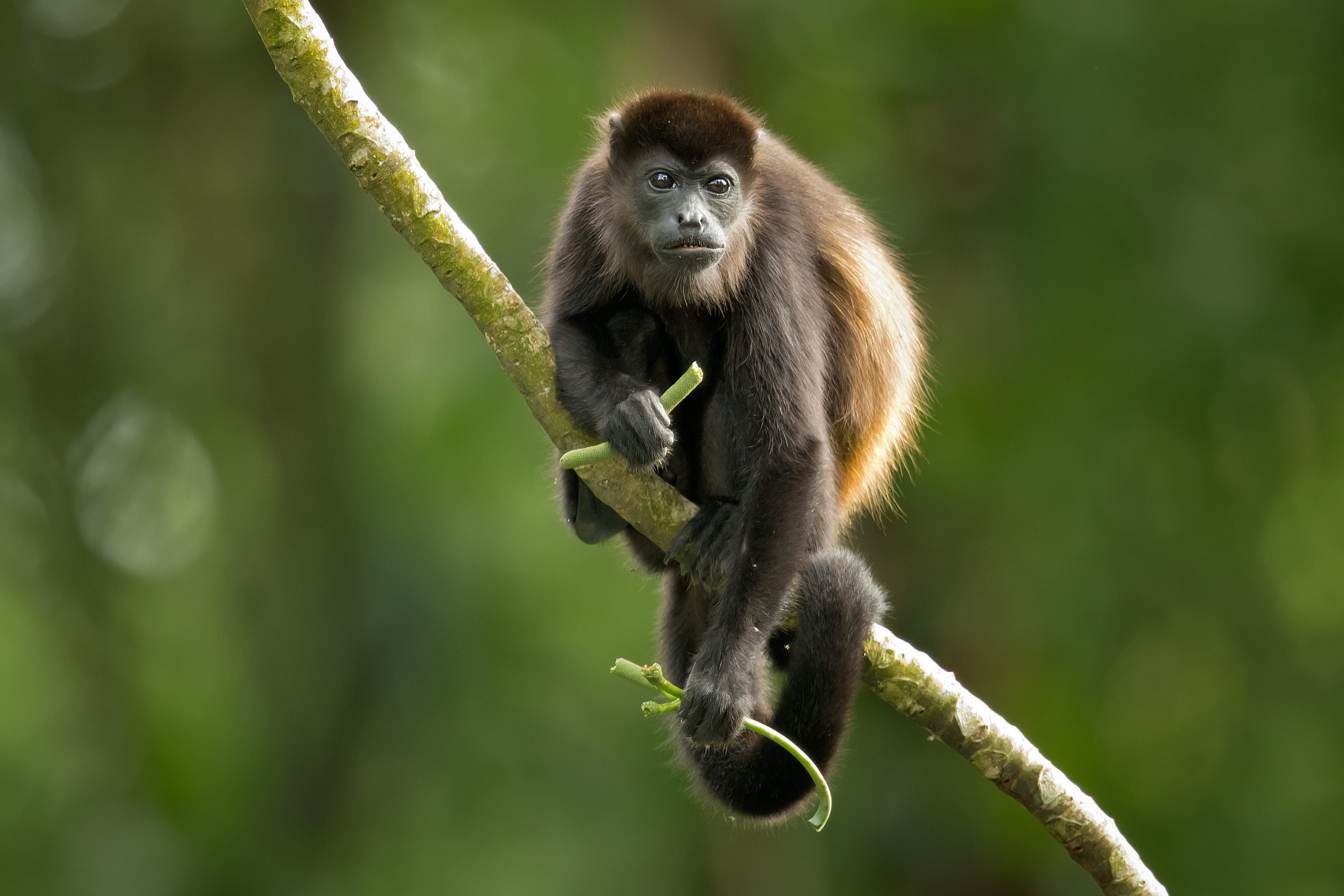 Another major difference with the Central/South American monkeys is that some species of these types of monkeys have "prehensile" tails, which means they can grasp objects. "This means they can fully support their own body weight by hanging from their tails," Dr. Rodrigues says. These monkeys also spend a lot more time in trees, whereas African/Asian monkeys prefer the ground. New World monkeys have broad noses with outward-facing nostrils, Alm says. In addition, "some Central/South American monkeys vary in whether they have full-color vision, limited color vision—the equivalent of color-blindness in humans—or a mix of the two, with all males color-blind, but female varying," Dr. Rodrigues says. New World monkeys can also be found in the Caribbean, including on this gorgeous Caribbean island you've never heard of. 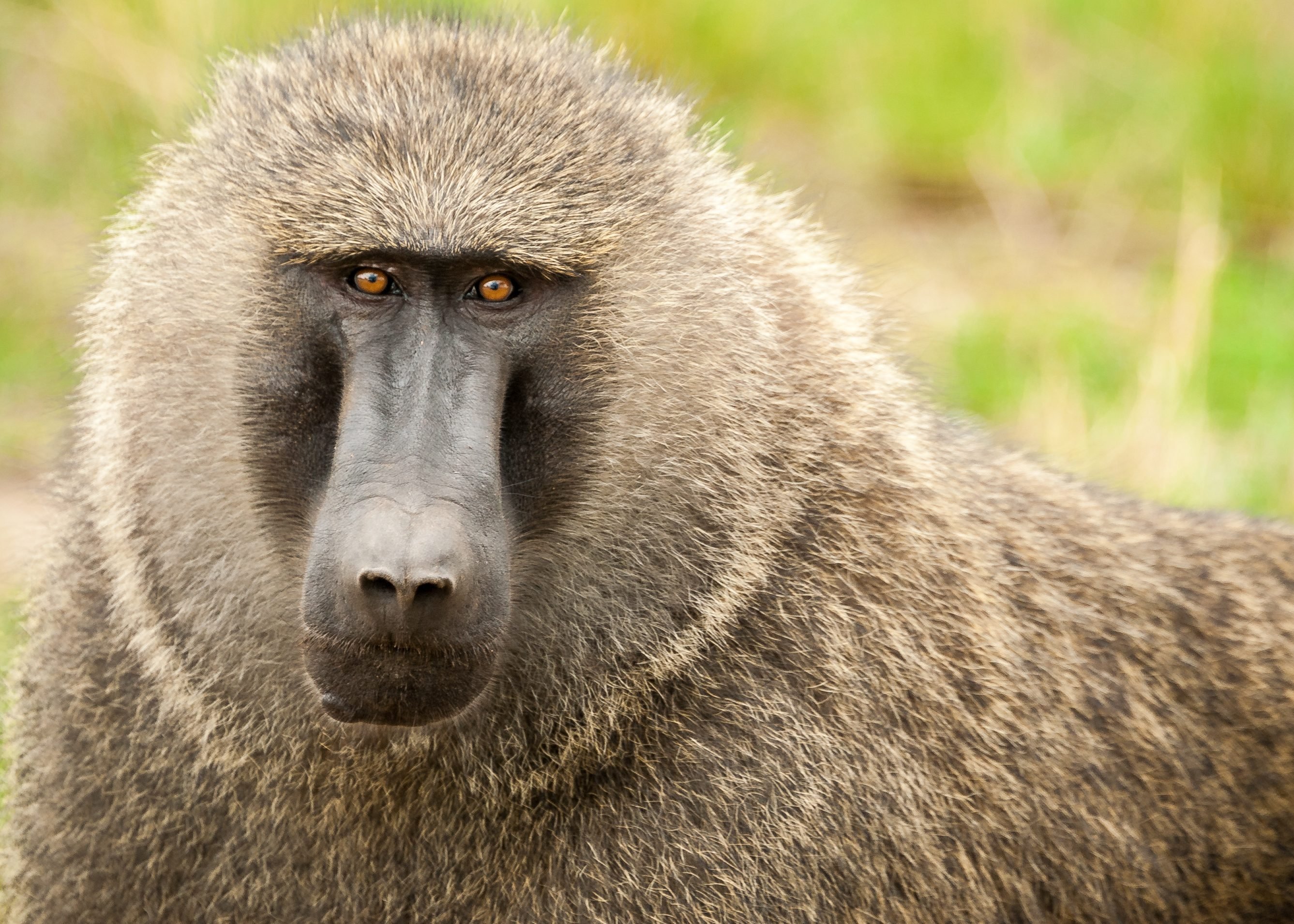 Within these broad geographic categories, there are narrower groups each called a "genus," which often have common names like "baboon." These can be further broken down into species. For example, there are five species of baboon: the olive baboon, the yellow baboon, the hamadryas or "sacred" baboon," the chacma baboon, and the Guinea baboon. Baboons, which live in Africa and Arabia, are some of the largest monkeys. They're recognized by their distinctive long muzzles and hairless bottoms, which cushion their tushes for sitting on the ground. Unfortunately, because they often come into contact with humans, they're sometimes seen as a pest. Their bad reputation isn't helped by this fact: "Baboons will use infants as shields," Dr. Mayhew says. Many animals in a variety of places are decreasing in number. Find out how many elephants are left in the world. 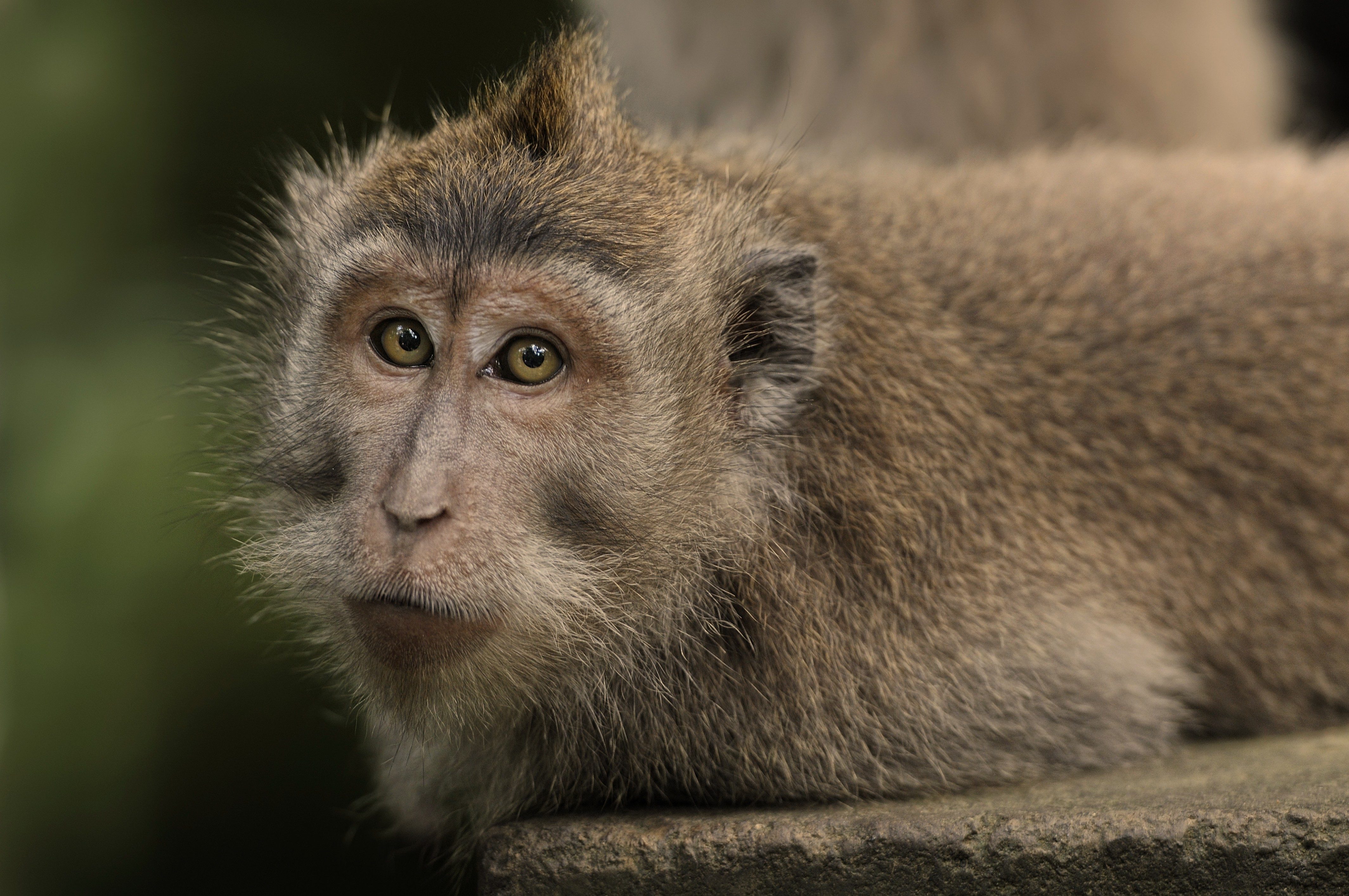 If you've ever seen monkeys chilling in natural hot springs in snow-covered Japan, those are the types of monkeys called macaques, which live in Asia and Africa. In a fun fact about animals you probably didn't know before, macaques have also been known to pick-pocket coins. "There are 23 species, and each brings something unique to the table," Mayhew says. "Tibetan macaques live exciting, noisy, and very social lives, and we're only beginning to scratch the surface of their complex social behaviors. Tibetan macaques and some other species engage in what we call 'bridging' behavior, where an infant is used as a social tool between two adults. One will scoop up an infant and bring it to another, where they will both hold it and chatter or lip-smack over its genitals. Why this happens exactly isn't completely understood, but it's fascinating nonetheless!"

Dr. Rodrigues loves Barbary macaques. "Barbary macaques are found in North Africa, and what's interesting about them is that males spend a lot of time carrying and playing with the infants," she says. Find out the animals you didn't know could talk. 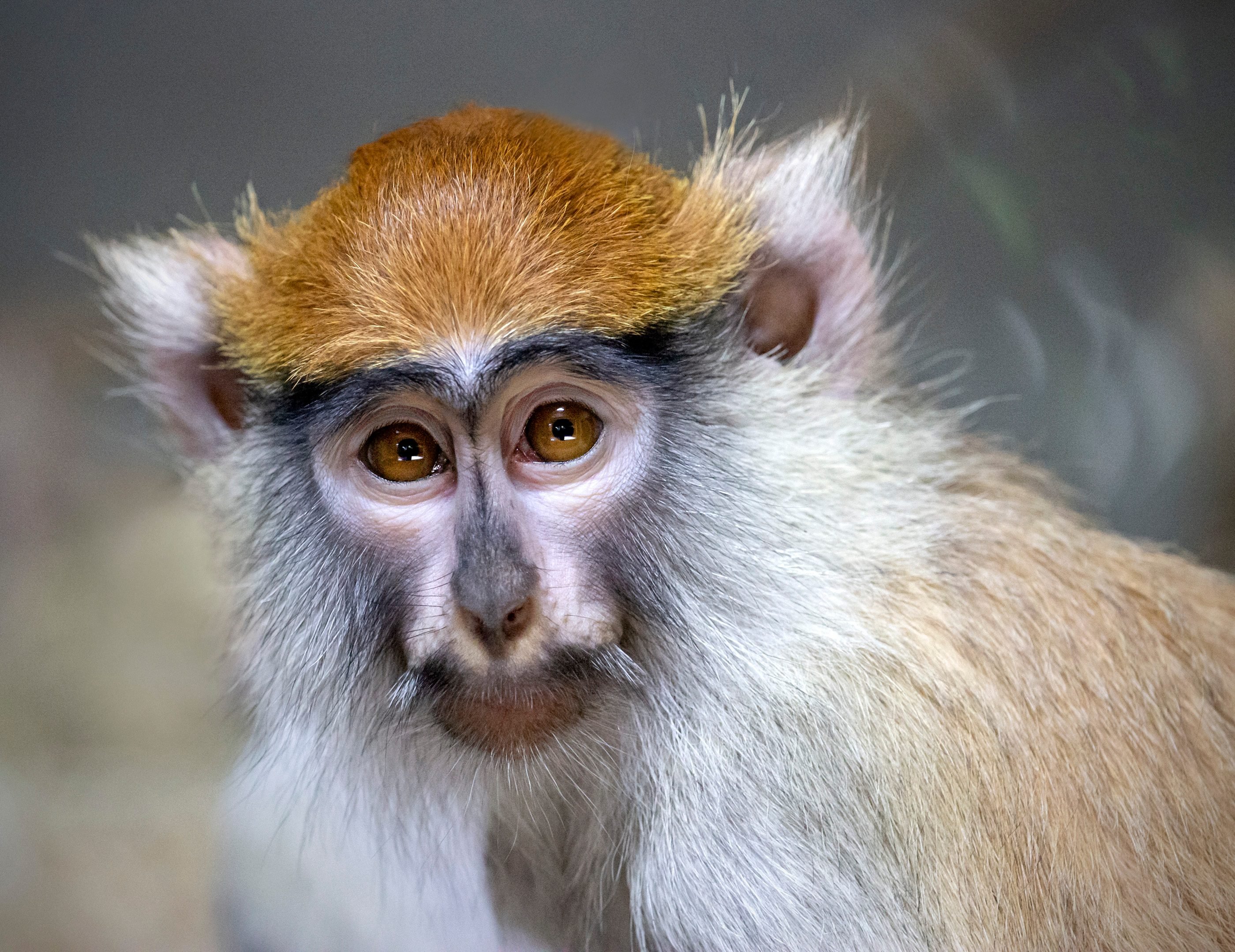 With 26 species, guenons are the largest and most diverse group of African primates, according to the Smithsonian National Zoo in Washington, D.C. They're known for their colorful fur patterns and for their gracefulness, thanks to a long tail that helps them balance. One monkey that's often grouped with guenons is one of Alm's favorites, Allen's swamp monkey. As its name implies, this monkey spends a lot of time near water. "An interesting feature about them can be found on their hands—Allen's swamp monkeys have a slight skin webbing that can be seen between their fingers and toes, which aids them while swimming to forage or escape predators," he says. 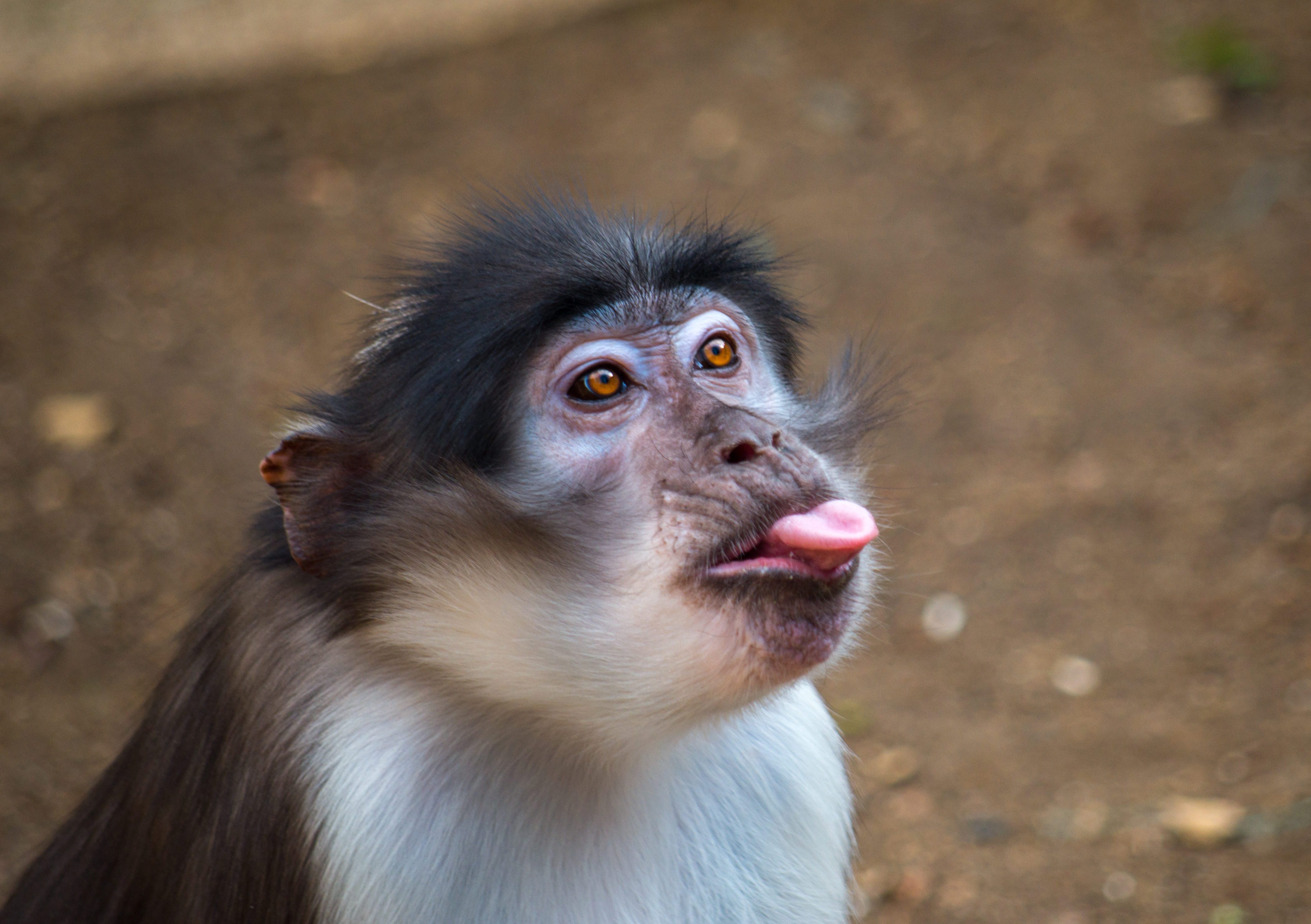 These African monkeys are known for their white eyelids, although not all of their 13 species have them. Rodrigues describes one of her favorites: "Red-capped mangabeys live in West Africa, and they have a characteristic dark mahogany 'cap' on their head," she says. "They have 'fission-fusion' social organization, which means instead of staying in one cohesive group, the larger community can split off into subgroups." Sadly, the red-capped mangabey is one of the wild animals that became endangered in 2019, moving up from "vulnerable" status on the International Union for Conservation of Nature's Red List. 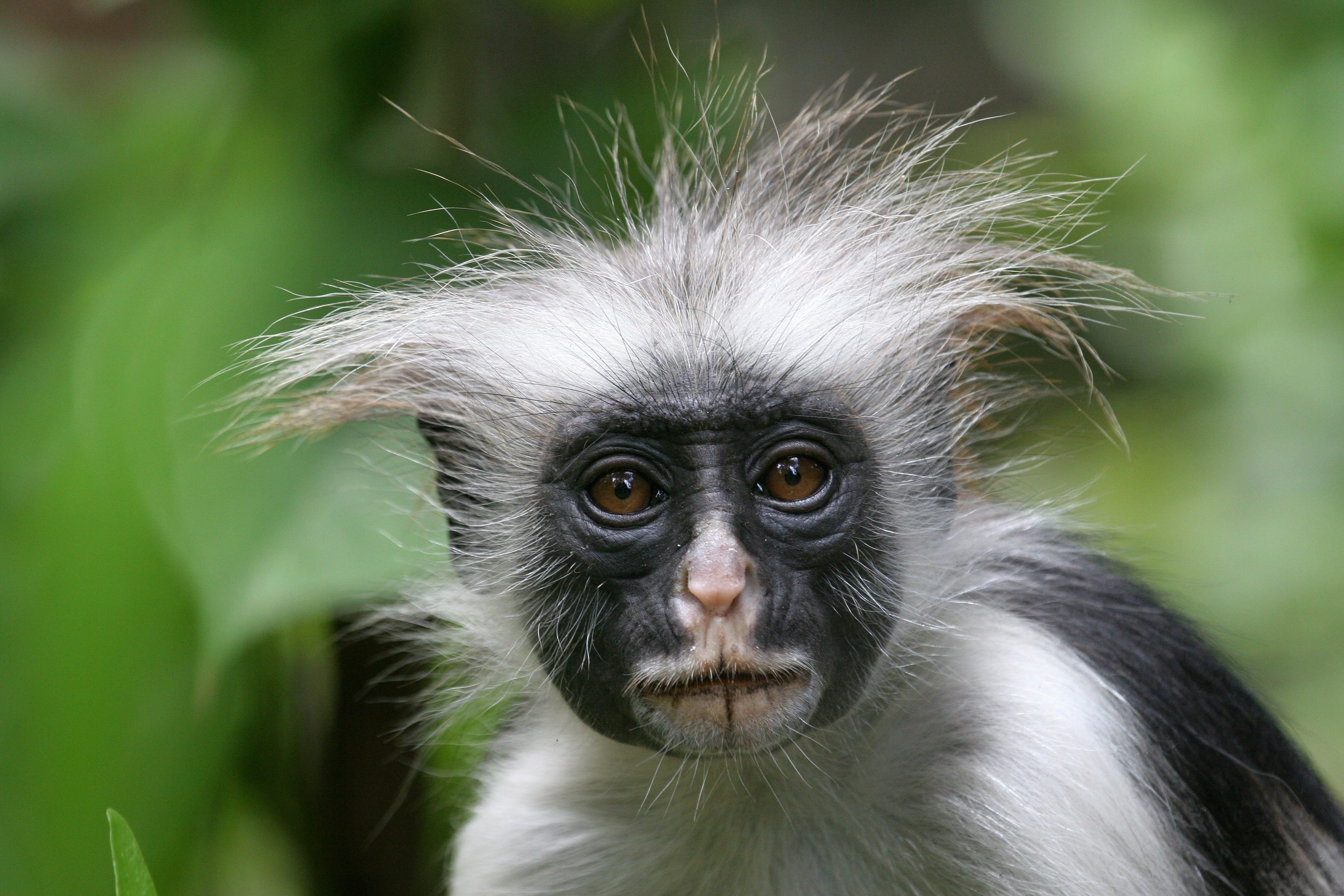 Colobus monkeys have a lot in common with Asian monkeys, with stomachs that have adapted to a diet of leaves. Yet they live in Africa, high up in trees."I love the Zanzibar red colobus, which lives on Zanzibar and has striking red, black, and white coats with adorable tufts of white hair around their face," Rodrigues says. Unfortunately, the Zanzibar red colobus is endangered. Alm likes the Guereza colobus monkey. "One unique and distinctive feature of this leaf-eating monkey species is that babies' colorations are all white when they're born," he says. "One thought behind this is that they are easy to see and find by the family group up in the densely vegetated treetops." Adults in this species have black and white fur around their face, white tails, and long, white hair around their back. 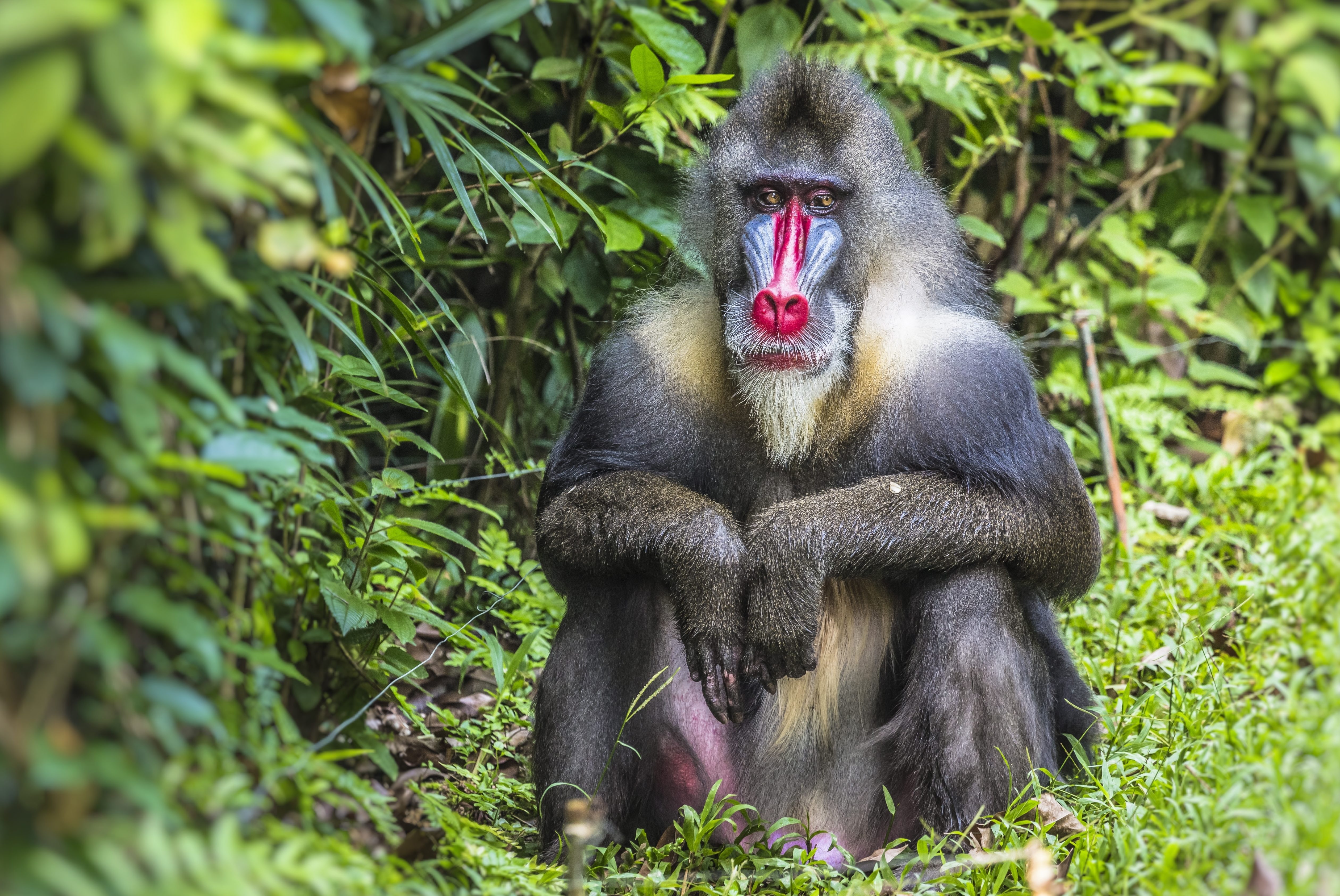 Related to baboons, drills and mandrills have distinctive physical characteristics and short tails. "Mandrills live in West Africa, and they are known for their beautiful red and blue faces and butts, and the intensity of that coloration varies with hormones," Rodrigues says. They may be some of the most colorful animals in the world. "Additionally, they have the biggest canines of any primate, and the reason they have long faces is because their canine root is so huge," she says. Drills, related African monkeys that also have colorful bottoms and long faces, have a red lower lip and are known to smile to keep the peace. Drills and mandrills are each their own species, so they're one of a kind—and sadly, drills are endangered. 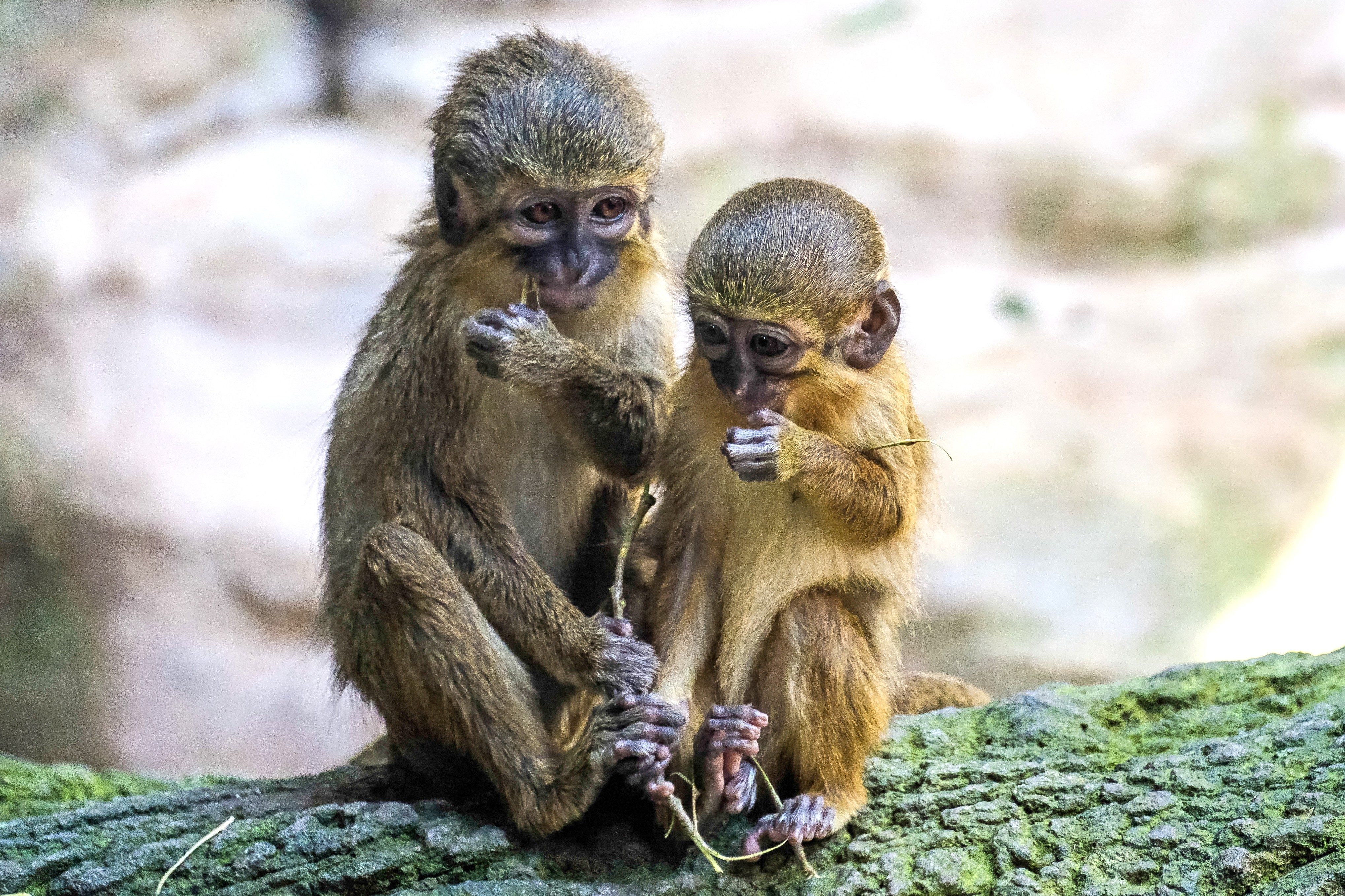 The continent of Africa has no shortage of additional types of monkeys: The vervet monkey, which live in sub-Saharan Africa, are often recognizable for their gorgeous brown, gray or greenish fur, black faces, long tails, and agility. Some lesser-known monkeys are talapoins, which are the smallest Old World monkeys in Africa; patas monkeys, which have distinctive reddish fur and serious-looking eyebrows; and geladas, which look similar to baboons with long fur but only live in the mountains of Ethiopia, where they (rather unusually among monkeys) like to munch on grass. Known for their distinctive "bleeding heart," a hairless red patch on their chest, geladas have provided some of the most strikingly beautiful animal photos you need to see.