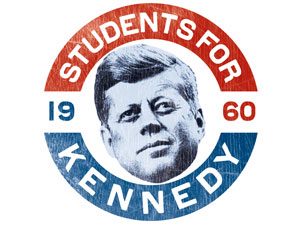 Whether you’re suffering from political burnout or don’t want to visually declare your candidate of choice, Retro Campaigns has a solution: vintage campaign t-shirts. Even the most devoted political wonks would be impressed with the expansive selection of iconic American campaign images and slogans, from William Henry Harrison’s famous “Tippecanoe and Tyler too” slogan right up through Bill Clinton’s “Bridge to the 21st Century” in ’92.

“We might sell more Kennedy and Reagan, but I get the most questions about Henry Clay, Walter Mondale, and Barry Goldwater,” said founder Christine Lusey. “People latch onto the semi-obscure political figures.”

Lusey has always been interested in politics, and started the company after a fruitless search for a Robert Kennedy campaign tee. She draws inspiration from campaign memorabilia (for example, the Students for Kennedy t-shirt was inspired by an old button) as well as original ideas.

So as the presidential election continues heating up to November, stay cool with the Bull Moose Party t-shirt: “A square deal all around.”

These vintage Christmas photos will fill you with holiday nostalgia.