For starters are they whales, or sharks? These gentle giants are both beautiful and fascinating and we bet you didn't know some of these incredible facts. 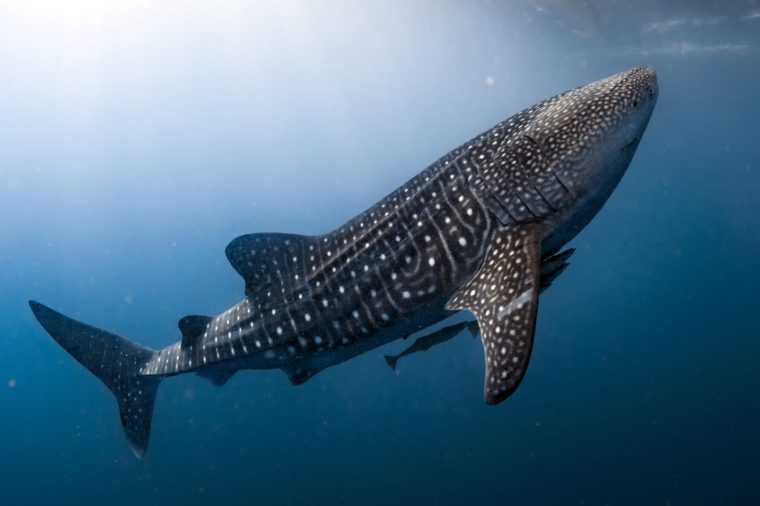 Whale sharks are the biggest fish in the world

Whale sharks are the largest fish on the planet; the average whale shark is between 18 and 40 feet long, though the Georgia Aquarium says the largest whale shark observed was 61.7 feet long. Most weigh between 15 and 20 tons. They're about twice as large as great white sharks—if you think of a city bus, that's about the size of a whale shark. Worried about sharks? You'll want to know the truth behind these ten shark myths you shouldn't believe. 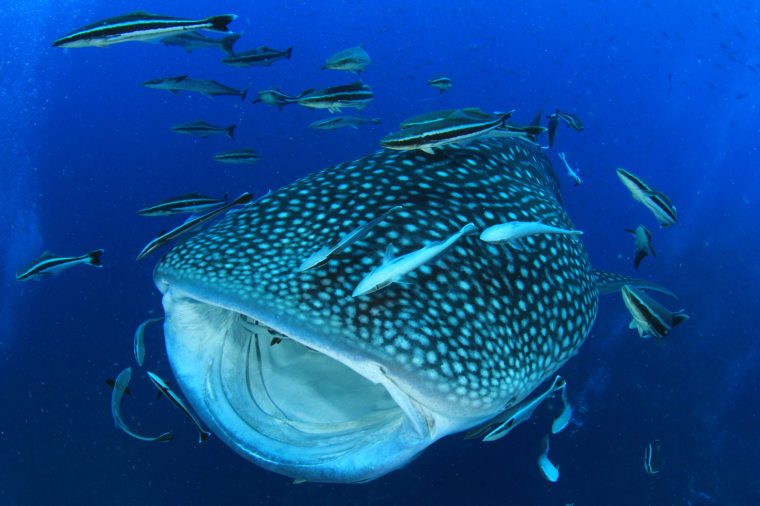 Whale sharks are sharks, not whales

Despite the confusing moniker, whale sharks are fish, rather than mammals like whales. They're called whale sharks for two reasons: They're as large as many whales and they don't feed like most sharks, but instead like humpback and other baleen whales. They filter out tiny animals like krill and plankton from the seawater, swallowing the food and expelling the water through their gills.

Like all sharks, whale sharks don't have bones, rather their skeleton is made of cartilage. Other shark characteristics include using their gills to extract oxygen from the water, rather than breathing air. Unusual for non-mammals, whale sharks give birth to their young live instead of laying eggs that hatch outside the body, which is one of the reasons the whale shark makes the list of nine of the weirdest, wildest sharks in the world. 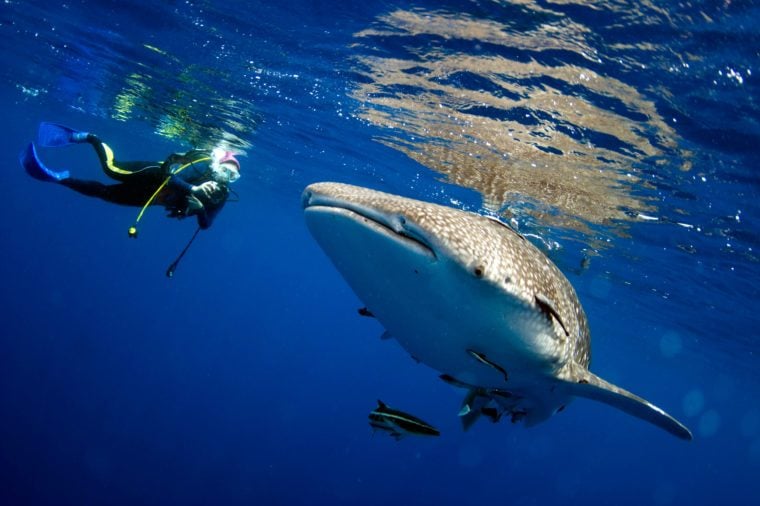 They're huge, but they're not dangerous. Whale sharks are gentle creatures that mostly ignore humans; in fact, they're one of the nine animals that aren't as dangerous as you think. The biggest risk they post to humans is accidentally swatting one with their tail if they swim too close. Even if you were somehow sucked into the whale shark's five-foot-wide mouth (don't worry, there are no reported incidents of this ever happening), you would not make it into the shark's belly. The Georgia Aquarium describes a whale shark's throat as the size of a quarter, though others say it can be as large as a human fist. 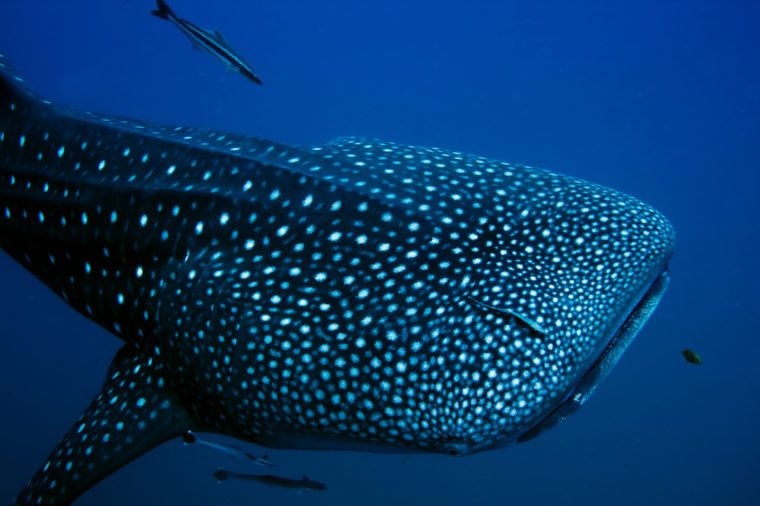 The whale shark's size is the first thing you notice, followed by the checkerboard pattern on their skin. Each whale shark's pale spots and stripes are unique, kind of like a fingerprint—the World Wildlife Fund and other researchers use photo databases to identify and count the animals. The checkerboard pattern is on their gray and brown backs, while their bellies are white. 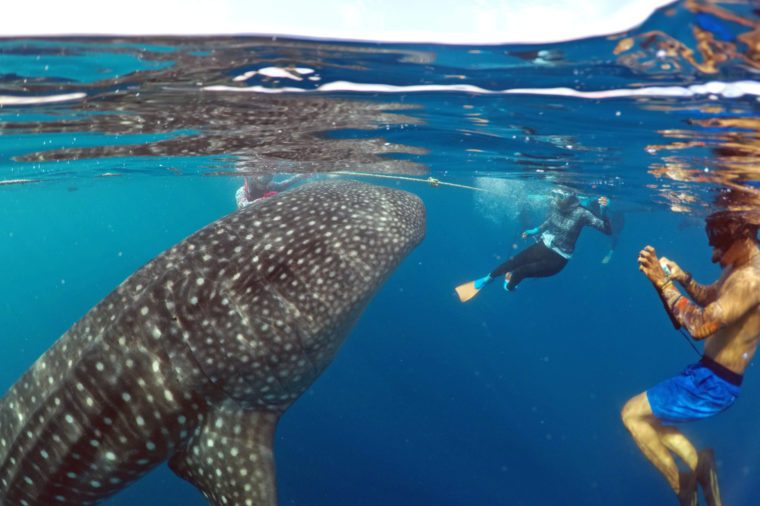 A whale shark has never eaten a person

Whale sharks rarely even notice humans, let alone eat us. They don't eat anything larger than small fish. While they do have 300 rows of teeth in their giant mouths, whale sharks don't use them for eating. Each of their 3,000 teeth is tiny—less than half the size of an aspirin—and marine biologists aren't even sure of their purpose.

Whale sharks are filter feeders, like baleen whales. They take a big gulp of seawater and then use their gill rakers to filter out the liquid. This allows all the tiny plankton and krill, as well as small jellyfish, squid, and fish to flow through their tiny throats to be digested in their bellies. Smithsonian Magazine reports that it's impossible for a whale shark to eat a person and that they spit out all food they're not used to, even rice. 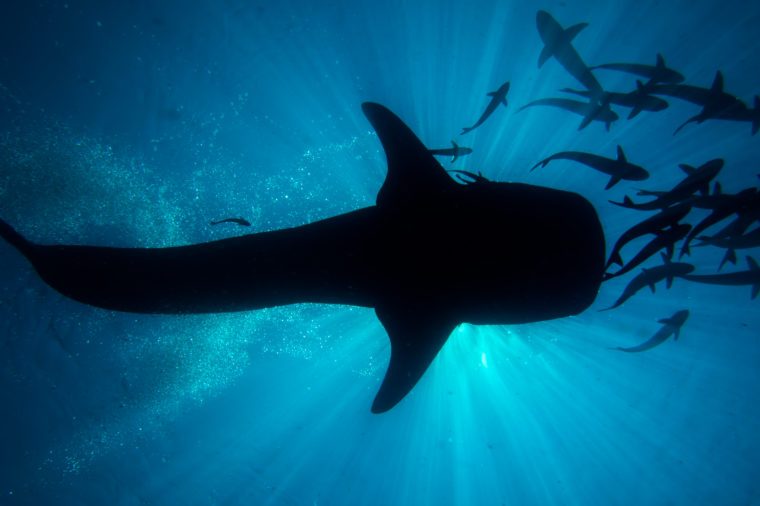 Scientists are still learning about whale sharks and debate how long they can live. Some say they can live up to 60 years in the wild, while others, like Live Science, say they can reach 100 or even 150 years old. While a few whale sharks have been kept in captivity, The New York Times reports that most survived for only a year or so. 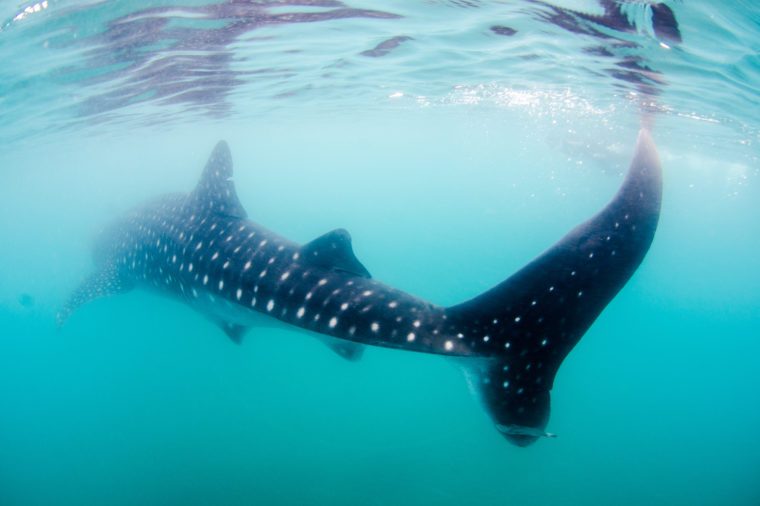 Whale sharks live all around the world

Whale sharks live in the wide band of oceans about 35 degrees north and south of the Equator. The majority (75 percent) live in the Pacific and Indian Oceans, with the remainder in the Atlantic. Whale sharks have been seen as far north as New York and as far south as South Africa and Australia. Whale sharks are migratory animals, arriving to an area when their favorite food, plankton, is in bloom and then moving on to other waters. 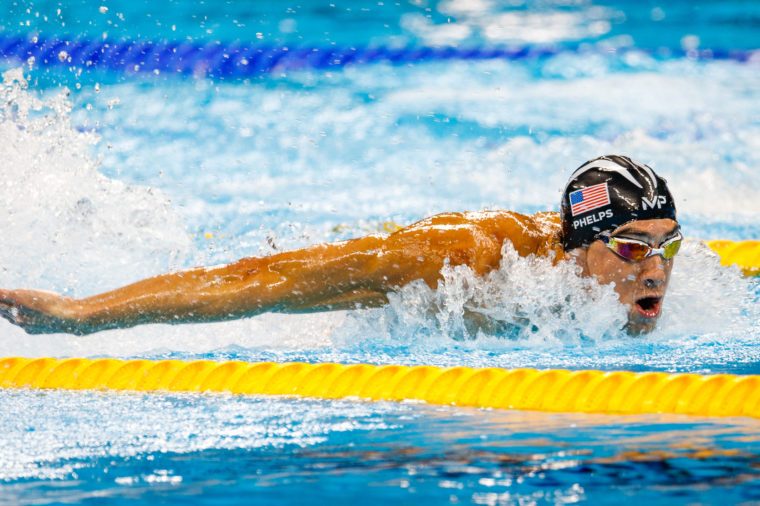 In the world of aquatic creatures, whale sharks are slow swimmers, cruising along at about three miles per hour. In comparison, Michael Phelps has reached speeds of six miles per hour, so he could easily best a whale shark in a sprint. However, most of us swim at a rate of only two miles per hour, which means a snorkeler could keep up alongside a whale shark for a short period to admire the animal's size and beauty. 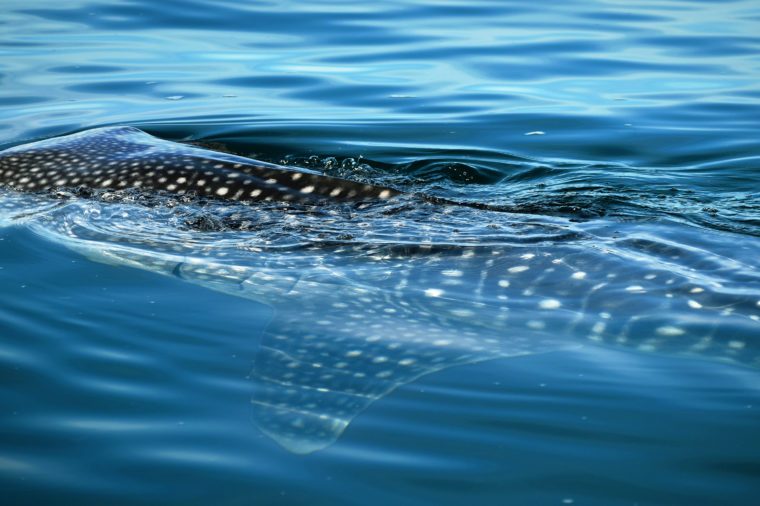 As of 2016, the International Union for Conservation of Nature (IUCN) classifies whale sharks as endangered, with a declining population. That's a change from 2000 and 2005 when they were classified only as vulnerable.

According to the IUCN, whale sharks that live in the Atlantic are less at-risk than their cousins in the Indo-Pacific region. The population of whale sharks has been declining largely because of climate change, strikes by boats, and fishing. While some countries have enforced restrictions and bans on whale shark fishing and trade, there is still a market for whale shark fins in China and for their skin, oil, and meat.

There is hope for whale sharks as more and more countries enact and enforce laws and regulations to protect them. Whale shark tourism has helped, as people realize that whale sharks are worth more alive and healthy than dead. Hopefully, they'll be able to join the list of animals that came back from the brink of extinction. 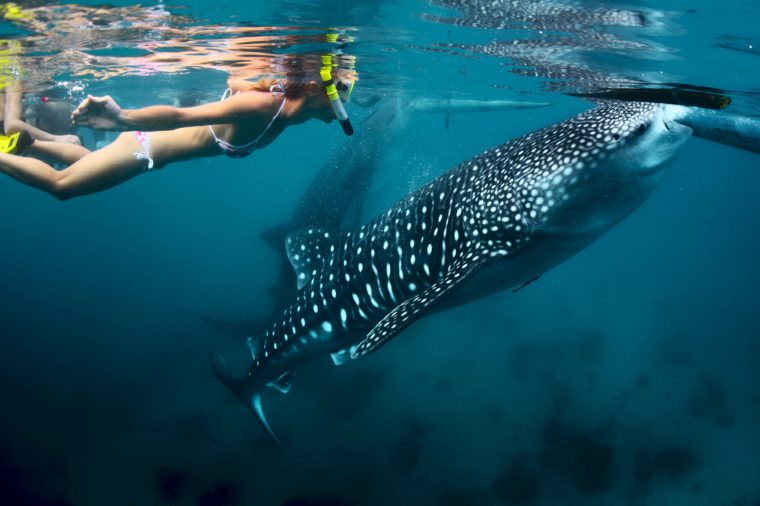 You can snorkel with whale sharks

Wildlife tourism helps us realize that protecting animals and their environments is important. However, it's critical that all wildlife encounters, including swimming with whale sharks, be done responsibly. Mexico is one of the few countries that has whale shark tourism laws. In La Paz, on the Baja peninsula, locals take whale sharks very seriously and ensure that rules are enforced to protect them. La Paz is also an easy place to view the gentle giants. From October to April, whale sharks are frequently found at a spot within sight of the city's statue-lined seawall. It takes just a couple minutes by boat to get there, and there's a system in place to make sure the sharks aren't crowded and that everyone follows the rules to protect them. It's an amazing experience that people talk about for years afterward.