National Mail Carrier Day is coming up so please don't mind us if we get "carried" away with these photos of what mail-carrying looked like a century ago. 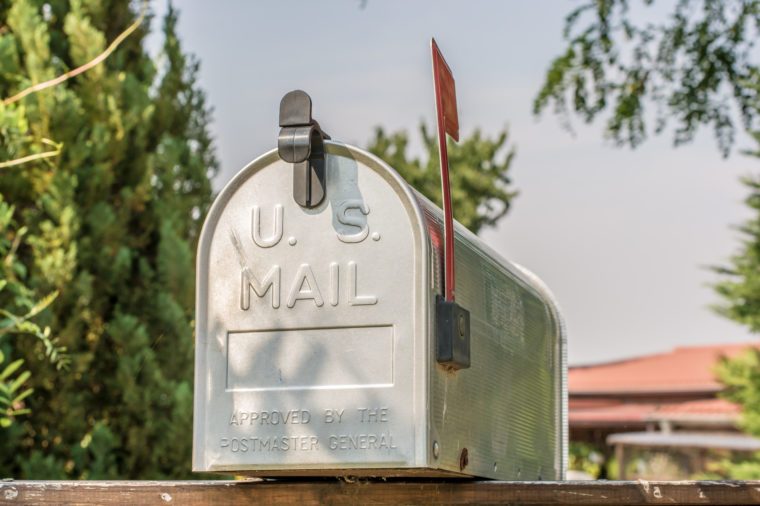 Mail through the ages

The U.S. Postal system was established on July 26, 1775, with founding father, Benjamin Franklin as the first Postmaster General. Of course, it wasn't the U.S. system back them, but rather the system in place for the colonies, but it set into motion much of what we think of today as mail delivery. And that system relies on, among other things, the tireless dedication of our legions of U.S. mail carriers. Find out 23 things your mail carrier doesn't have the heart to tell you. 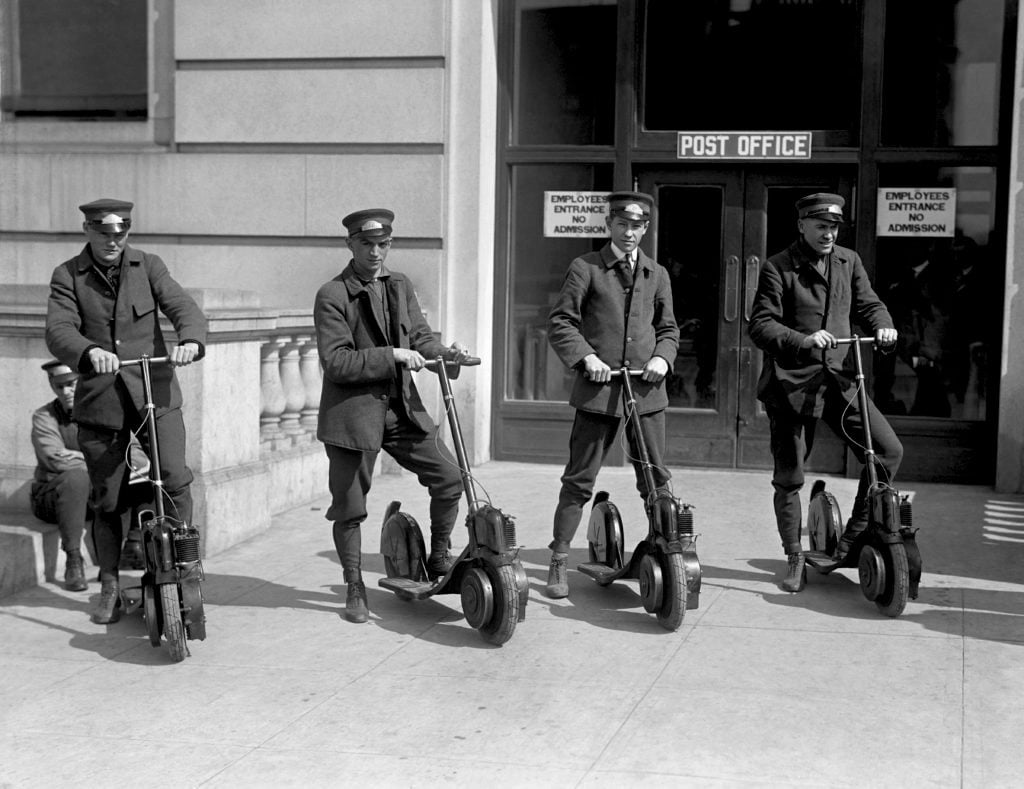 Sometimes they rode around on scooters

If you think postal delivery people riding around on scooters is a new thing, we're here to enlighten you: mailmen have been delivering mail via scooter for more than a century. Check out these postmen, poised astride mail scooters and ready for delivery duty circa 1910. Find out 13 things about being a mail carrier that will surprise you. 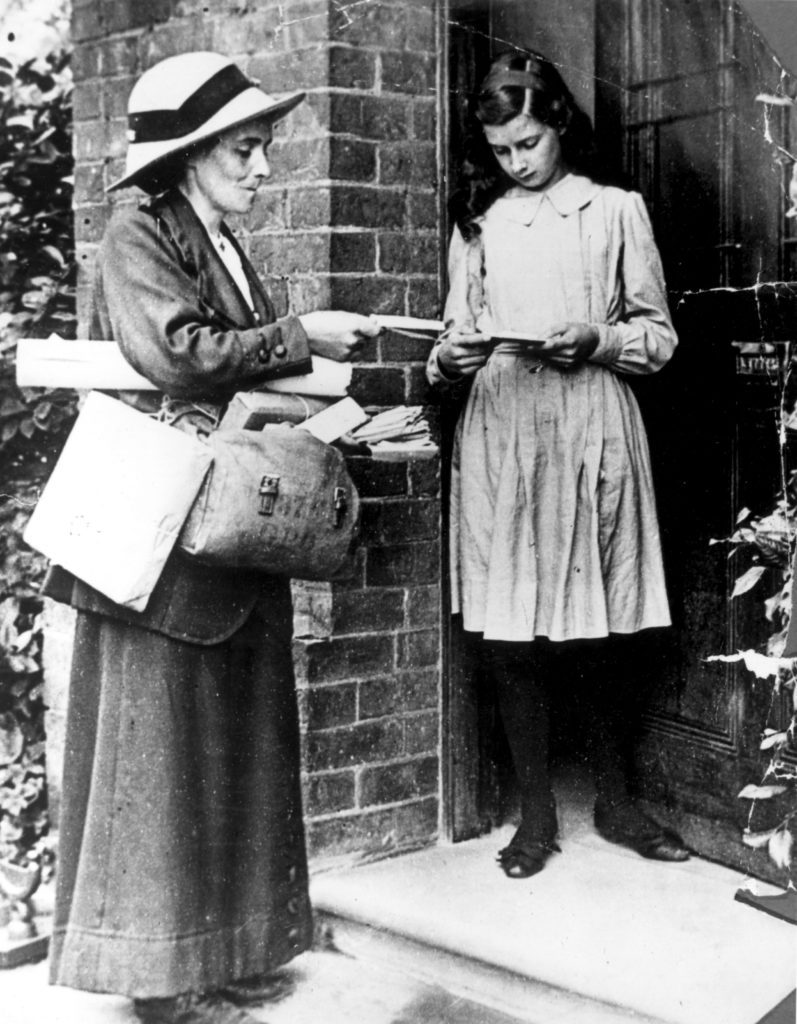 Did you know that women have been working as mail carriers since the turn of the 20th century? Women were initially employed only to service rural routes. However, by 1917, female mail carriers had begun taking city routes. That was the year this photo—of a female postal worker delivering mail to a young girl—was taken. Today, more than one-third of all letter carriers are women. Here's why you shouldn't tip your mail carrier in cash. 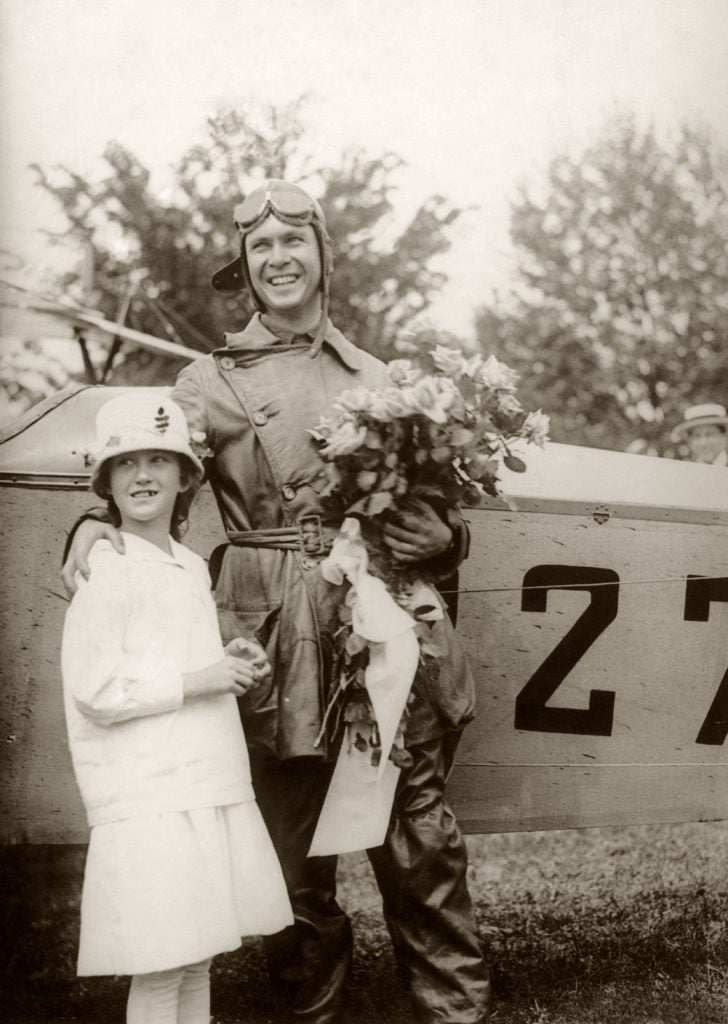 The birth of airmail

The first official airmail was delivered on May 15, 1918. The man in this photo, Lieutenant James Clark Edgerton, was the youngest of the six pilots who flew the mail that day. He got the job because of nepotism, according to the Smithsonian Postal Museum—his dad worked for the U.S. Post Office Department, which was a predecessor of the U.S. Postal Service. He's pictured with his younger sister, Elizabeth, following his arrival in Washington, D.C. Here's what you're legally allowed to gift your mail carrier.

A creative use for airmail

Not even a year after the dawn of airmail delivery, this photo was taken of a woman arriving via airmail in San Diego, California. The postal worker who met the plane is hand-canceling the postage that paid for her as cargo...so that it can't be used more than once. Nowadays, there are laws prohibiting the mailing of humans. Find out what school looked like 100 years ago. 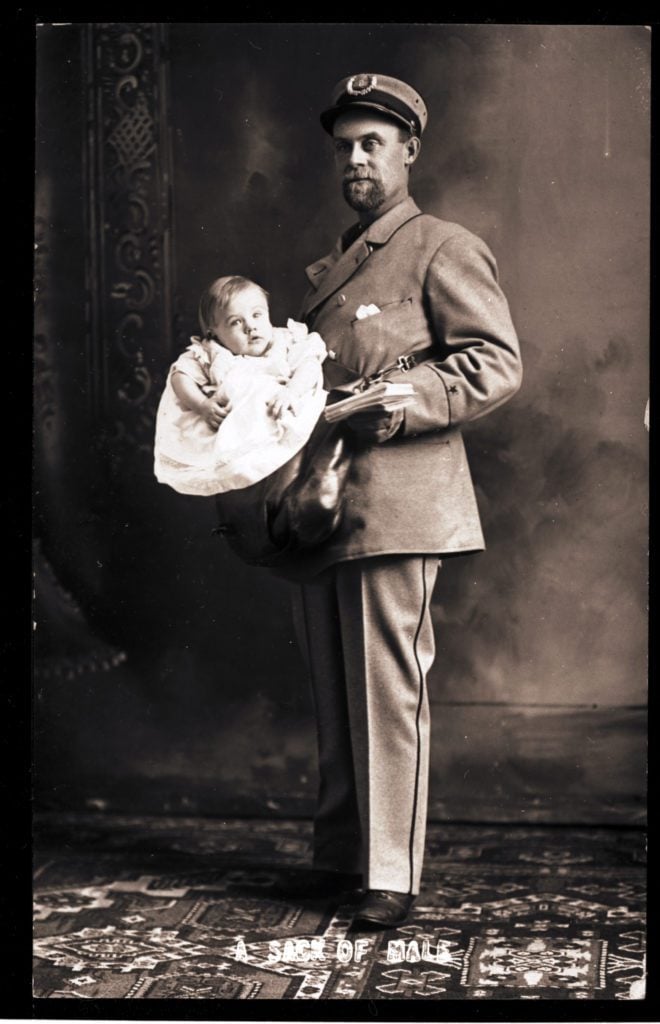 The practice of using the mail to deliver humans from one place to another had actually begun in 1913, coinciding with the advent of the U.S. Postal Service's Parcel Post service. Immediately after Parcel Post went into effect, an Ohio couple used the service to mail their infant son from their house to his grandmother's house a mile down the road. The practice was banned in 1920. Here are 50 more things you didn't realize were officially banned by law. 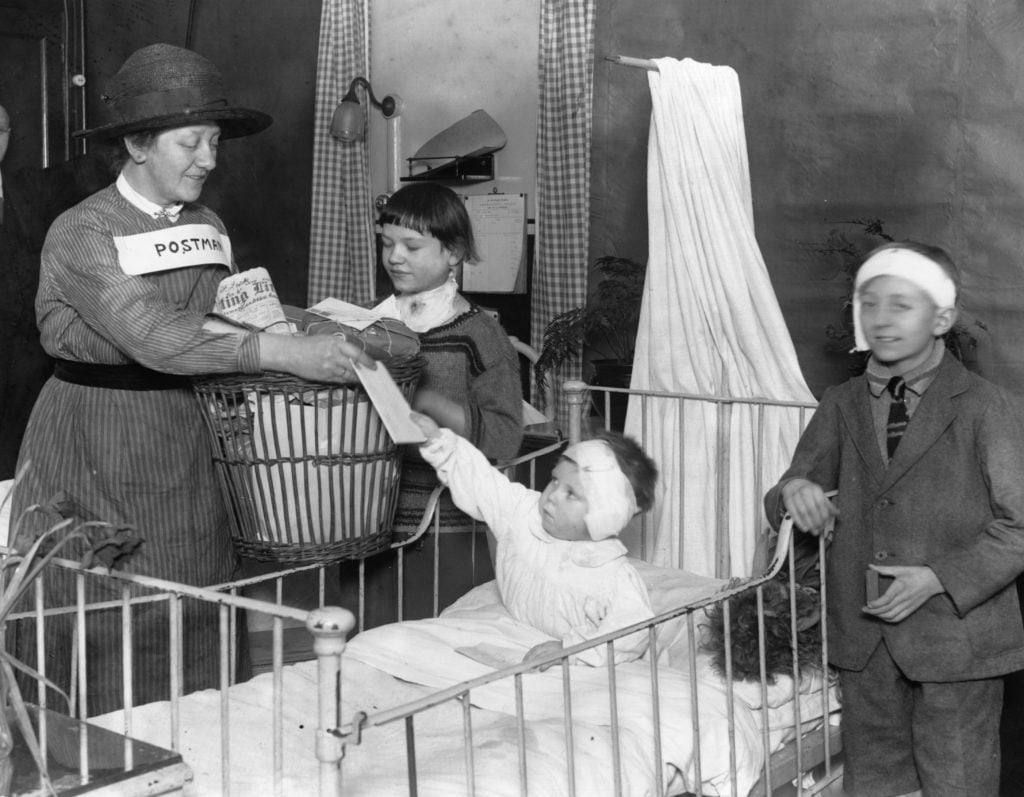 How mail can make a child's day

In this 1926 photo, children at a London hospital wait anxiously as a woman dressed as a "postman" announces "mail call" on the ward. Nowadays, more and more mail is nothing more than "junk," but guess what? We've got tricks to stop junk mail from finding its way to you for good. 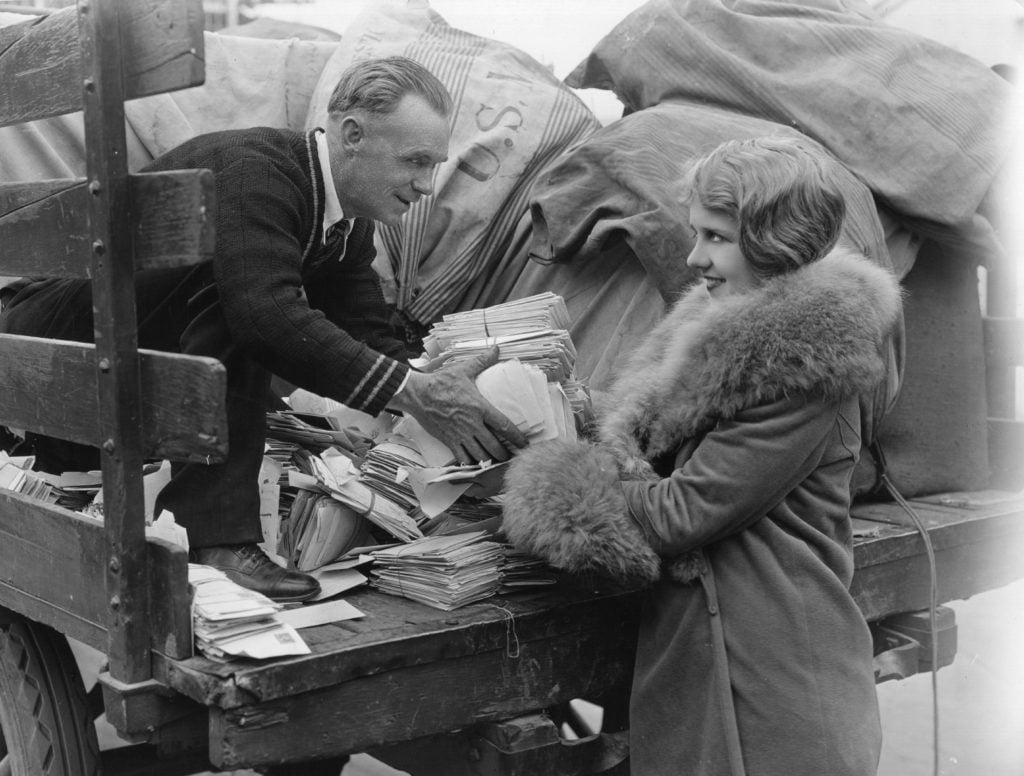 It's not just kids who light up at the sight of a letter. In this photo from 1925, a woman receives a pile of letters from a U.S. postal delivery person, and she looks positively delighted. While we can't say for sure that this photo wasn't staged for the benefit of boosting the Postal Service's profile, it's safe to say everyone understands the power of receiving something personal via post. Find out the 11 shocking secrets your mail carrier knows about you.

Most if not all the postal workers seen here sorting mail in 1920 are female. And most, if not all, had begun their careers as postal workers during World War I, which the BBC says was an important factor in the changing role of women back a century ago. Another factor? Women in the United Kingdom had been granted the right to vote in 1918. Check out these 13 moments that changed women's lives forever. 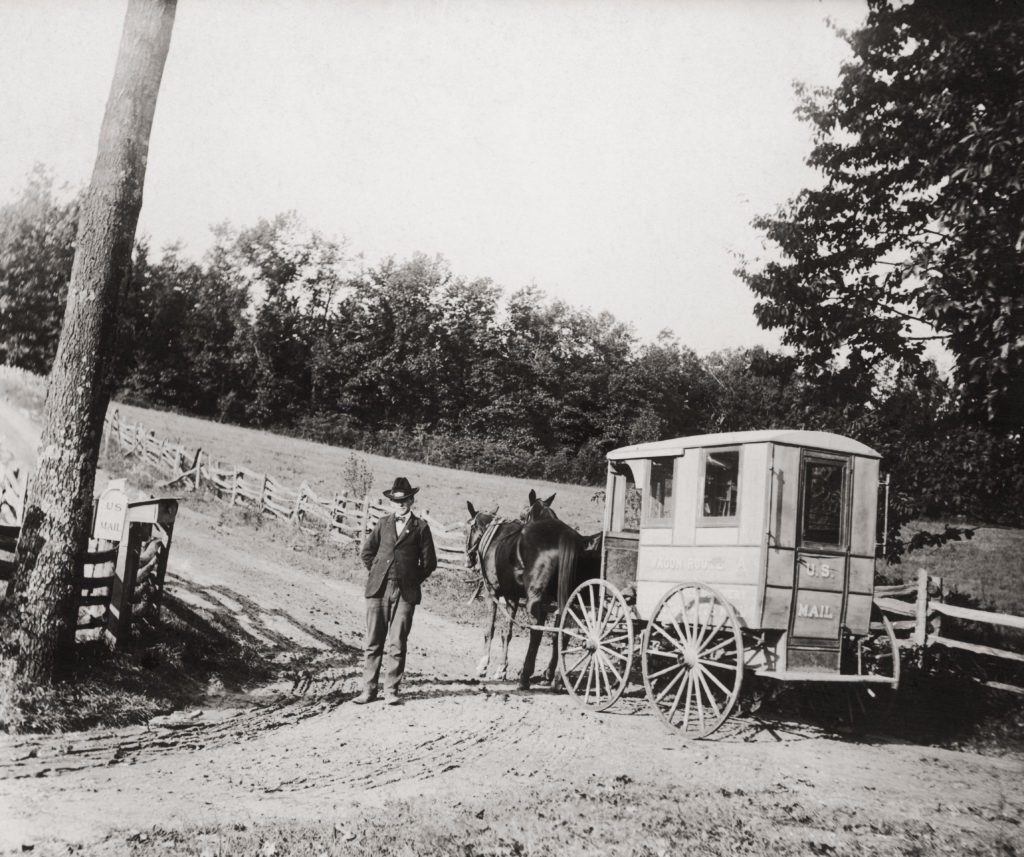 Horse-drawn wagons originally were used to transport mail in large cities, according to the U.S. Postal Service (USPS). Automobiles were first tested for mail delivery in 1899 and first put official use in 1906. By 1911, "motor wagons" were being used for mail delivery in only seven cities. This photo, taken around 1920, shows a horsedrawn mail carriage as it is about to climb up a steep hill. But as cars became more accessible, horsedrawn mail carriages began to disappear until 1933, when only 2 percent of postal vehicles in cities were horse-drawn. Find out 13 times mail carriers were everyday heroes. 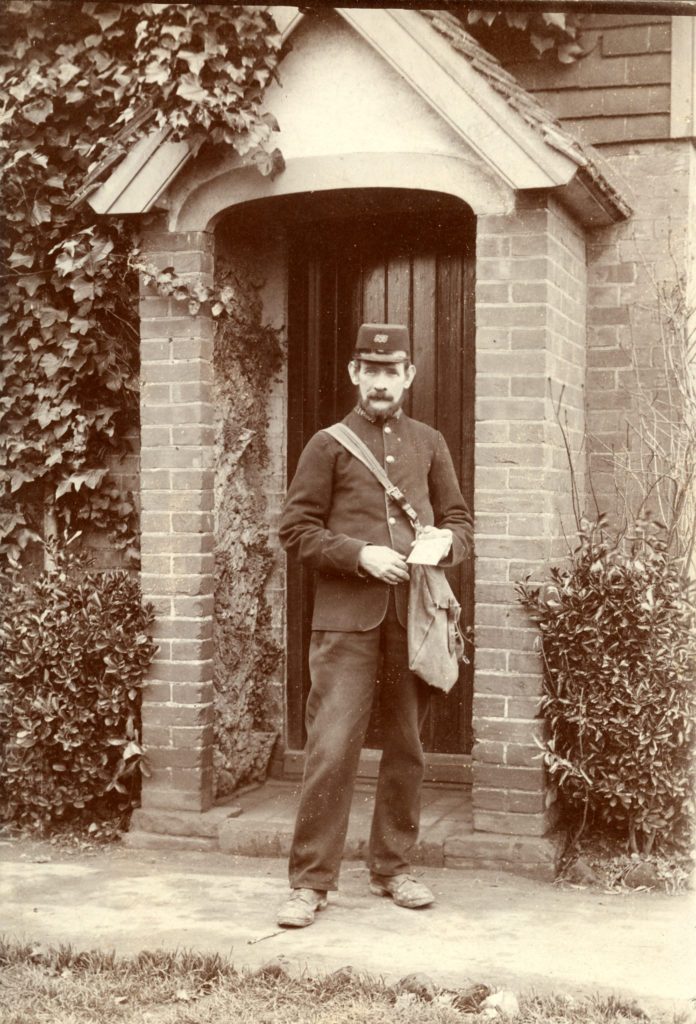 The uniform goes back a long way

"City letter carriers were first required to wear a uniform in 1868," states the USPS. Initially, the uniform was blue-gray with black trim and bore a resemblance to military garb. The uniform evolved over time to provide greater comfort, especially in the heat of summer. But try telling that to the postman pictured here in 1920, wearing a heavy, buttoned-up woolen uniform topped with a hat. Don't miss what a mail carrier of 20 years knows about you. 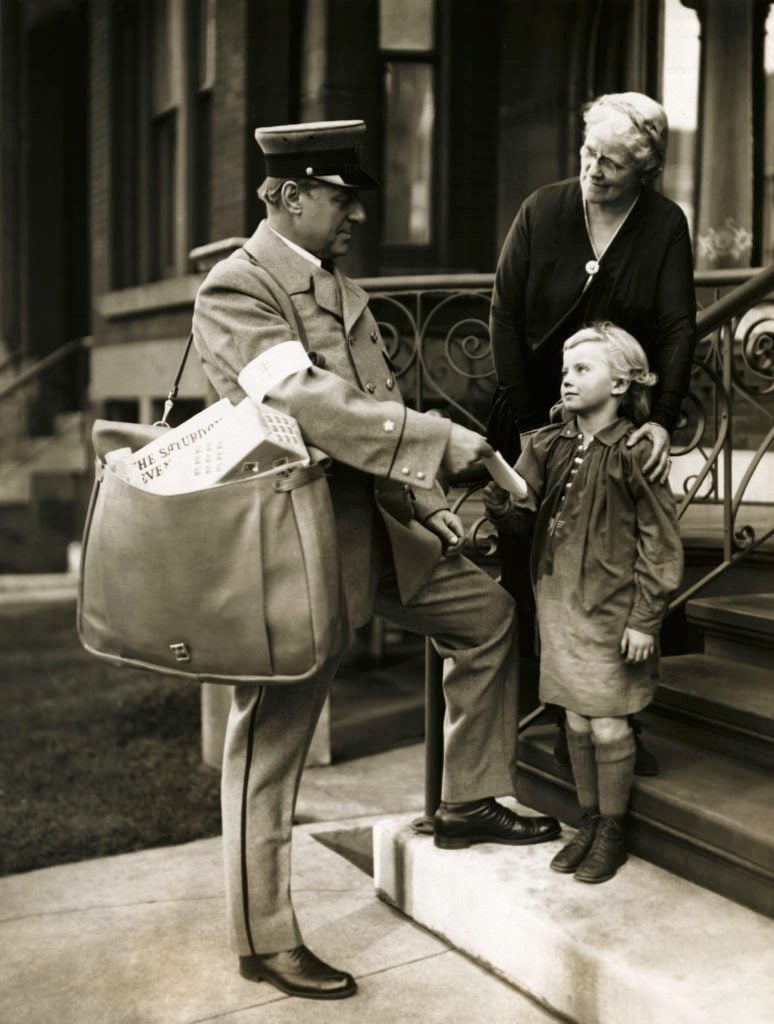 The Postmaster poses as a postal delivery man

In 1925, Postmaster Arthur C. Leuder donned the mail carrier uniform and even borrowed a mail pouch from an actual mail carrier as a way of kicking off that year's Christmas Seals campaign, which raised funds to fight tuberculosis (TB). Christmas Seals had first been issued in 1907 in an effort to raise funds to fight TB. Don't miss these 16 surprising facts about the U.S. Post Office.