Over the last 30 years, these rides have blended whimsy with philanthropy. Don't mind the flying monkeys. 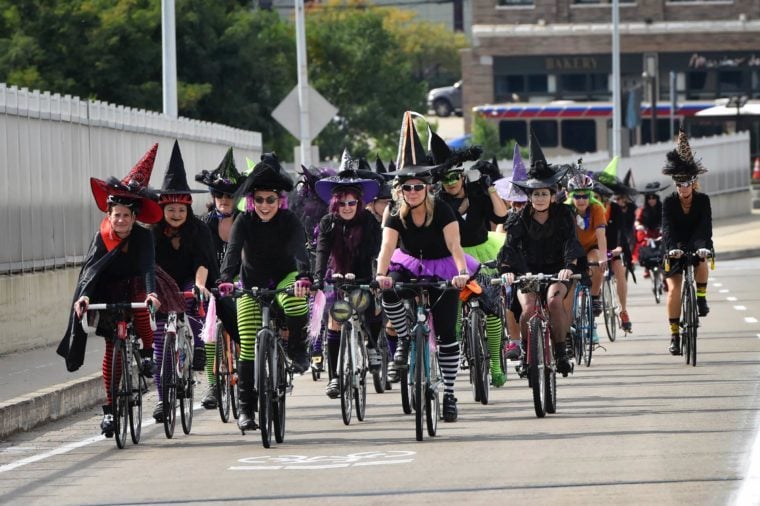 Courtesy Rebecca WaldenThey ride in on bikes, motorcycles, even Arabian horses, for reasons as noble as fundraising or as simple as cultivating community in October, the spookiest of seasons with its seriously creepy origins. They are part of a growing national trend of witches rides, taking place throughout the month and quite possibly, in a community near you. So what the heck is a witches ride anyway?

Its origin begins in the coastal Florida town of Seaside about 30 years ago, when resident Amanda Bacon and friends dressed up like witches and rode their bikes to nearby Grayton Beach for fun. One glimpse from the schoolyard was all it took to pique community curiosity, and for a leisurely bike ride between friends to turn into a fundraising powerhouse. 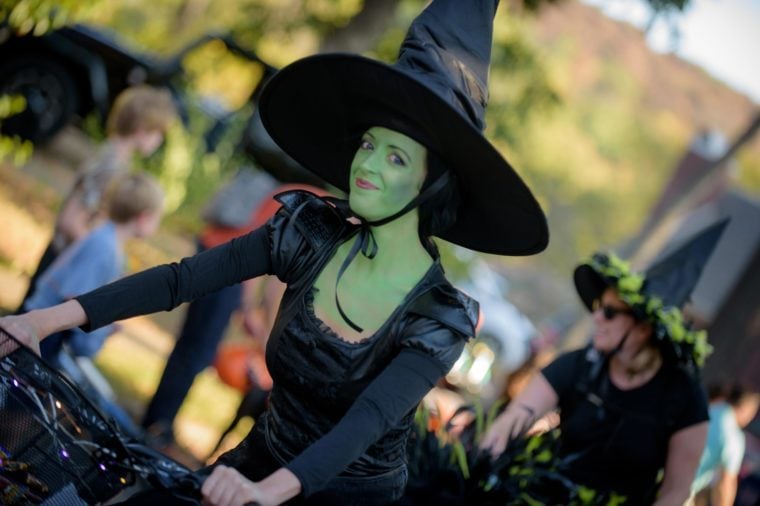 Courtesy Rebecca WaldenWhen Bacon moved to Fairhope, she shared the idea with her friend Jenny Beam Klein, an event planner with the Grand Hotel, and it exploded. Now in its third year, Fairhope’s ride is 600 strong, with considerable fundraising muscle. In 2016, the group presented a $12,000 check to Furrever Homes pet rescue, their chosen charity. A portion of those proceeds most recently supported Hurricane Harvey relief, providing vital supplies to Houston area animal shelters. “Our witches ride donations made this possible,” Bacon says. “We love that we can support their efforts, which have already resulted in an offshoot spay/neuter program.”

Elsewhere in the country, witches rides include 2,000-plus motorcycle riders cruising through New England streets.

“You will see two, three, and four-wheel motorcycle riders here, some from 3,500 miles away (Reading, Berkshire in England),” says Bill Patjane, executive director with the Massachusetts district office of the Muscular Dystrophy Association (MDA).

The ride, initiated by the area’s local Harley Davidson Owners Group, pulls in $1 million annually for MDA. It concludes with a parade in Salem, a town well known for its witch folklore.

Horse enthusiasts will be happy to learn there is even an equestrian Witches Ride brewing. Known as the Twisted Witches Ride, it’s a two-day endurance trek in Cincinnati, Ohio’s East Fork State Park.

“Proceeds support equestrian trail maintenance of the park,” Bruskotter says. “We will only release the flying monkeys in event of unsportsmanlike conduct, which of course we are not expecting.”

Northern Ohio has picked up on the fun as well, from the Folger Street Inn & Coffeehouse in Carrollton to a 50-member coven in Cleveland.

The Cle [Cleveland] Witches Ride, organized by Nancy Desmond, got its start from social media inspiration.

“A friend saw a picture online of a ‘witches ride’ in another state and suggested I start one, only half seriously,” she says. “I loved the idea, created a Facebook event page, and the ride attracted about 50 women.” 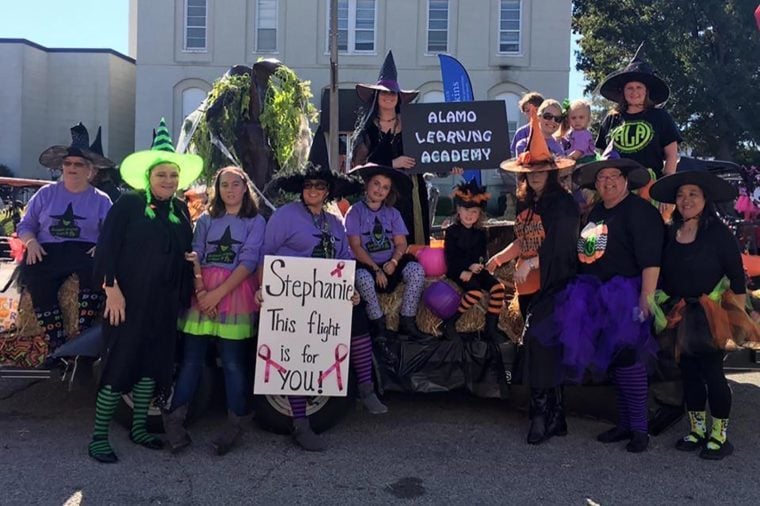 Courtesy Rebecca WaldenAfter cycling through downtown Cleveland, complete with a stop at a local bike shop offering a “witches discount,” the group continued their festivities at a nearby restaurant. (And Cleveland isn’t even the most bike-friendly city in Ohio!)

“I was struck by two things that year,” Desmond says. “There was something empowering about a 50-women ride, and also how people of every age and ethnicity broke into smiles, waving as we rolled by. It was so much fun to cause joy!”

By 2016, the group tripled in size and also raised $3,500, gifted to a local prominent cyclist for medical expenses following an accident. Perhaps most impressively, the funds come not from an event fee, but out of generosity from those who participate.

“There is no charge—it’s just an open invitation group ride,” Desmond says, adding that helmets are encouraged, as all responsible witches wear.

Races in Alabama, Louisiana, Mississippi, and Tennessee are popping up rapidly, many with ties to one that originated in Homewood, Alabama—a daughter’s tribute her mother, who passed away suddenly from bronchopulmonary adenocarcinoma, a non-smoking form of lung cancer.

“My mom always did this with her small group of friends,” says Homewood Witches Ride founder Janie Mayer. “They would dress up, ride, and hand out candy to the kids, then go enjoy a champagne brunch afterward.” In 2012, still reeling from the sudden passing of her mother that April, Mayer channeled her grief into action.

“That first year it was like two weeks before Halloween, but we gave it a try anyway, and it’s grown steadily ever since—We’re now up to 500 witches!”

Birmingham native Laura Feld participated in that race, and then replicated the idea when she moved to Franklin, Tennessee last year. 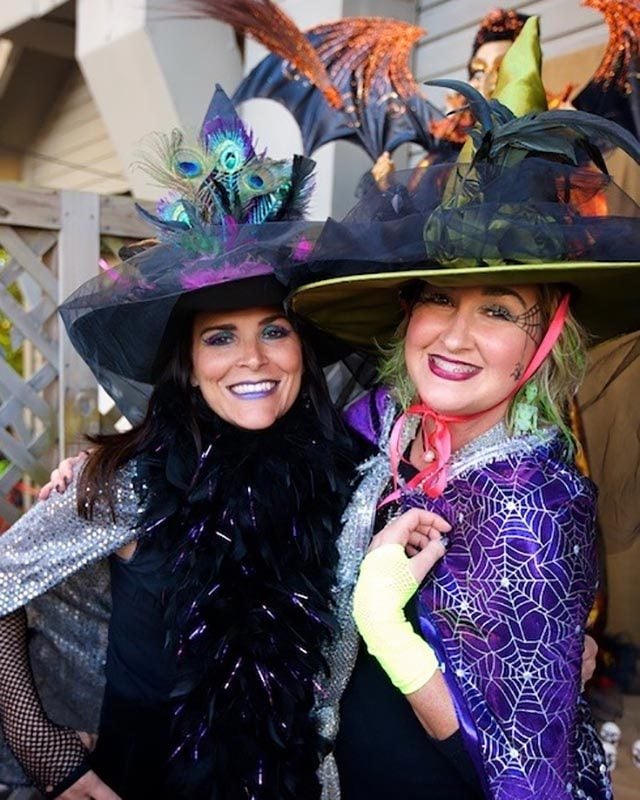 Courtesy Rebecca Walden“Witches dress in their most creative costumes and ride their decorated ‘broomcycles’ through the sidewalk trails of Westhaven,” Feld says, adding that all proceeds support the American Cancer Society. “We all know someone who has been affected by cancer and we fly in their honor.”

“Many of those who did not take part last year had some major ‘FOMO’ [fear of missing out] and plan to join us,” she says. “It’s a great way to have a little Halloween fun with friends and neighbors.”

For Lisa Lee, organizer of the North Hill Witches Ride in Pearl River, Mississippi, that includes assuaging concerns of those who hear the word “witch” in a less than lighthearted way. 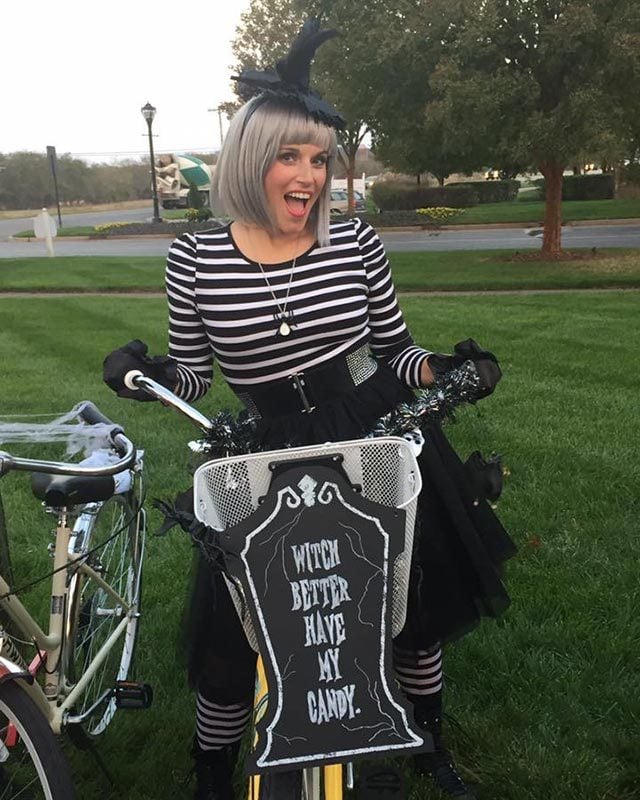 Courtesy Rebecca Walden“The biggest hurdle in small communities, especially where people have strong religious beliefs, is overcoming the associated negative connotations,” Lee says. “By no means is this event or others like it promoting anything unsavory; we are simply looking to have a great time, exercise a little, and most importantly, raise money for our chosen charities.”

Like the Franklin and Homewood rides, the North Hill event blends remembrance and revelry.

“My parents loved Halloween and for several years, they would host a haunted house in an old house on our property to raise money for St. Jude’s,” she says. “Halloween reminds me of those awesome memories of my parents and how they taught me to support charities I care about.”

As for the success of these groups, the secret sauce lies in a balance of philanthropy and frivolity.

Many are taking on a festival nature all their own, with live music, pre-event galas, ticketed VIP after parties, chili cook-offs, pet costume contests, and Kid Zones complete with DJ entertainment.

In Del Ray Beach, Florida, riders gear up one week prior with a Witches Brew Happy Hour and Silent Auction.

“I tell people all the time you have to have two outfits—a formal for the Brew and something sporty for the bike ride,” says race organizer Andie DeVoe.

And while the witches prepare to take flight, crossing A1A and Atlantic Avenue, locals flock to nearby restaurants so they can grab brunch (and the best tables) come the witching hour.

In its sixth year, the Del Ray ride draws about 150 participants, who last year contributed more than $6,000 to the Achievement Center for Children and Families.

“The city is so supportive, and the community has just fallen in love with this event,” she says.

Jenn Greene, organizer for the Mobile Witches Ride, says city involvement is mission critical for events like these.

“Even in a city like Mobile that wants you to bring events to them, there are required permits, the need for police escorts, permission from business neighbors to close streets, and so many other aspects to consider,” she says.

Greene uses EventBrite to manage all pre-race logistics, with what she’s dubbed “a small army of flying monkeys” the day of the event to handle ride packet pick up and also assist with beer, food truck, and merchandise vendors.

Police, some bewitchingly dressed themselves, serve as escorts along the route, conducting regular safety sweeps and aiding witches in bike distress (flat tire).

“By ride’s end, we’re enjoying a family-friendly block party,” Green says. “With hundreds of witches dancing in the street!”

Ready to start your own? 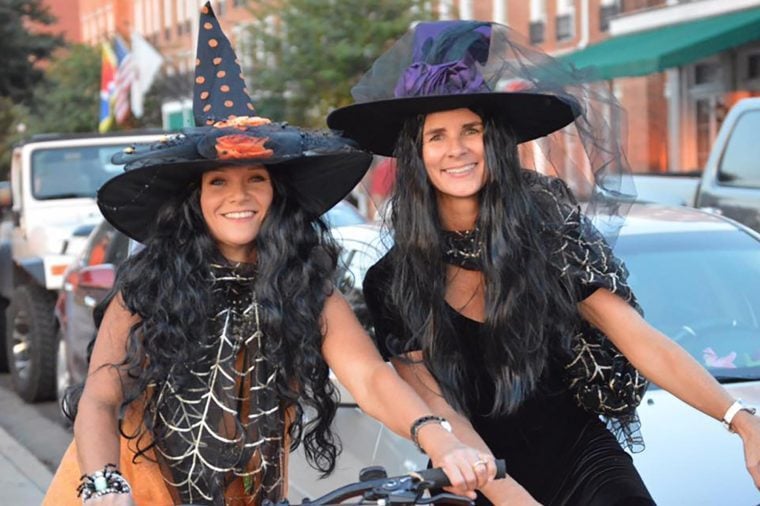 Courtesy Rebecca WaldenHow to start your own Witches Ride

You’d be surprised how easy this is—you can even do it this October!

Rebecca C. Walden
Rebecca C. Walden is a freelance writer with Deep South roots, an Alabama native now living in north Texas. Her writing has appeared in Reader's Digest, the Huffington Post, Southern Living, and many other regional publications, focusing on everything from health and wellness to parenting, family, and women's interests. Walden also writes for corporate clients in finance, government, healthcare, and higher education. Check out her latest work @rebeccacwalden.com. 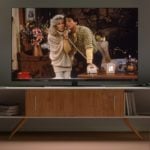