To make this ranking, social scientists, strategists, and storytellers at Harris Insights & Analytics look at public opinion, corporate reputation, brand strategy, and additional research. At their core, they want people to know the truth. And when it comes to grocery stores, the truth is pretty clear: Wegmans is number one. If you don’t have a Wegmans near you, try shopping at one of the other grocery stores that made the list—just make sure to avoid the grocery store with the worst reputation in America.

How is the survey ranked?

The Reputation Quotient (RQ) rankings are determined in two phases: the nominations phase and the ratings phase. The nominations phase comes from the general public. Survey respondents are asked for their opinions on companies they feel have the best and worst reputations overall. Although we are focusing on grocery stores, the survey is meant for companies of all sorts.

The ratings phase is conducted online, again for the general public. Respondents rate two of the companies that they are “very” or “somewhat” familiar with; for this particular survey, 25,800 people in the United States participated. The companies are then ranked based on “six dimensions of corporate reputation”: social responsibility, products and services, emotional appeal, workplace environment, financial performance, and vision and leadership. Finally, each company receives an RQ score out of 100: 80 and above is “excellent,” 75 to 79 is “very good,” 70 to 74 is “good,” 65 to 69 is “fair,” 55 and 64 is “poor,” 50 to 54 is “very poor,” and below 50 is “critical.”

Wegmans was rated the best grocery store, second on the entire list

In the 2019 survey, Wegmans’ RQ score is at 83, which beat out Amazon’s score of 82.3. It is the first grocery store to be listed within the list of 100 companies, and the second highest–rated company overall. Wegmans was also rated the top grocery store among all six corporate reputation dimensions, including the top company overall for workplace environment, second for social responsibility, and third for products and services. Between the Harris Poll and being rated America’s favorite grocery store by Market Force Information (which surveyed over 12,800 shoppers), Wegmans certainly has a special place in customers’ hearts. Now that you’re itching to shop there, here are 9 things you should always buy at Wegmans.

Wegmans wasn’t the only grocery store in the RQ rankings! Right behind Wegmans is Publix with a score of 80.3 and Kroger at 77.9.

Following closely behind is Aldi with 77.4. Wondering where Trader Joe’s fits into the mix? Since Harris Poll rates stores within the parent company, Trader Joe’s would also be ranked with Aldi at 77.4.

So that’s that! Wegmans is all-around a customer favorite store, according to multiple surveys. If you don’t shop there yet, these are the perks only Wegmans shoppers know about. 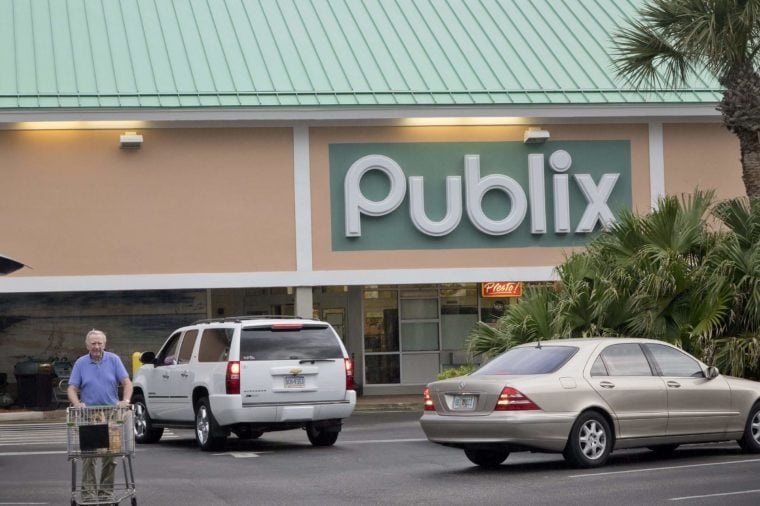 Cristobal Herrera/Epa/REX/Shutterstock Did you see a coupon from a competitor instead of Publix? Bring that coupon with you! Publix posts a list of competitors at each store, allowing you to bring in a coupon you saw elsewhere and get that same deal right at Publix. 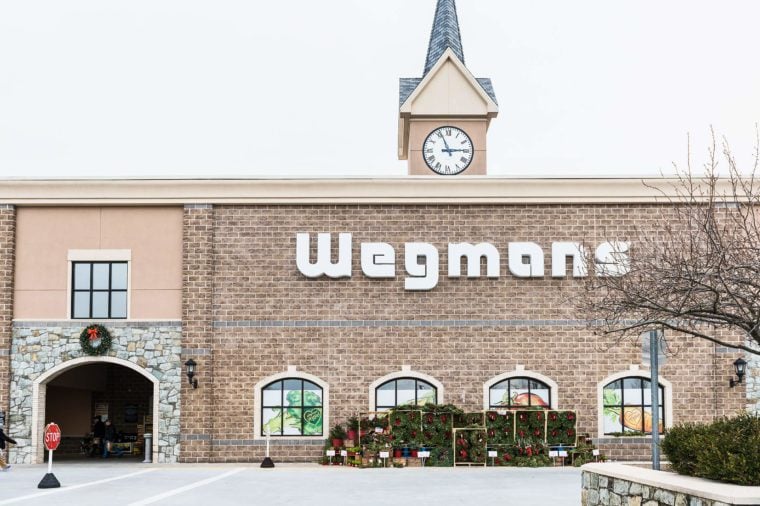 Andriy Blokhin/shutterstock Speaking of coupons, Wegmans offers a stellar deal with their double coupon policy. If you saw a coupon from a manufacturer that was less than $0.99 in value, Wegmans will not only give you that coupon but will also reward you with another $0.99 off. If the price is above $1, they will still give you the coupon’s face-value deal. Don't miss these 19 shopping tricks all frugal shoppers use. 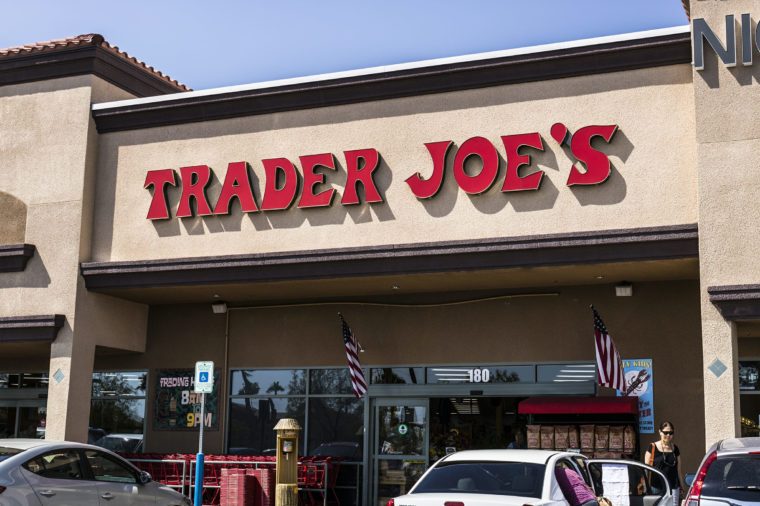 Jonathan Weiss/Shutterstock Hated the recent flavor of Joe Joes? Just return them! That’s right, even after trying something, you can actually return it if you found it unbearable. Trader Joe’s will happily take it back and give you a refund. These are the best grocery stores when it comes to free food samples. 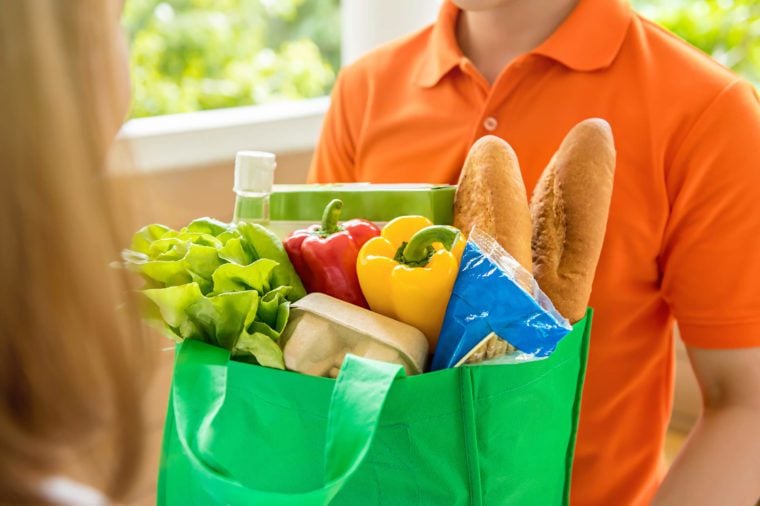 Atstock Productions/Shutterstock Do you get coupons for H-E-B? If not, well, you should. H-E-B offers a coupon deal called Combos Locos where, when buying two items together, you get discounted prices. For example, a deal could include a bag of salad with a free bottle of dressing! Keep an eye out for deals on their website. Here are more sneaky ways to find great deals online.

The Bargain Bins at Aldi 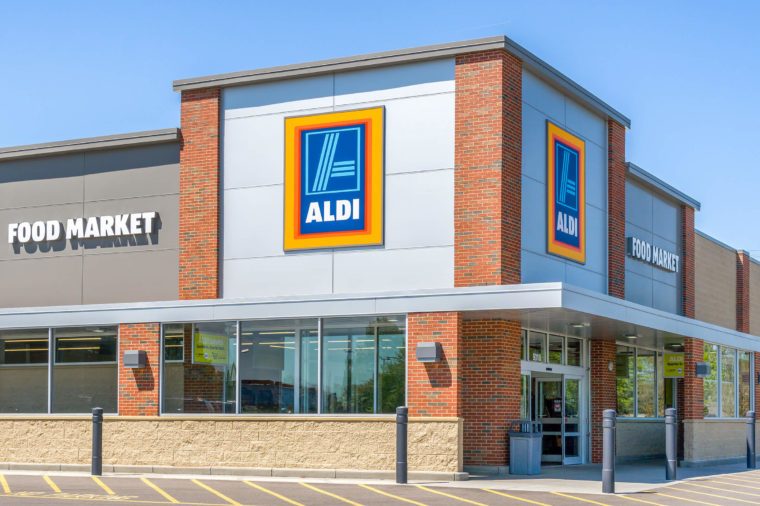 Ken Wolter/shutterstock Nope, these bargain bins actually aren’t a rip off (like some bargain bins turn out to be). You are going to want to take advantage of the incredible deals at Aldi’s bargain bin because the low prices will actually knock your socks off. 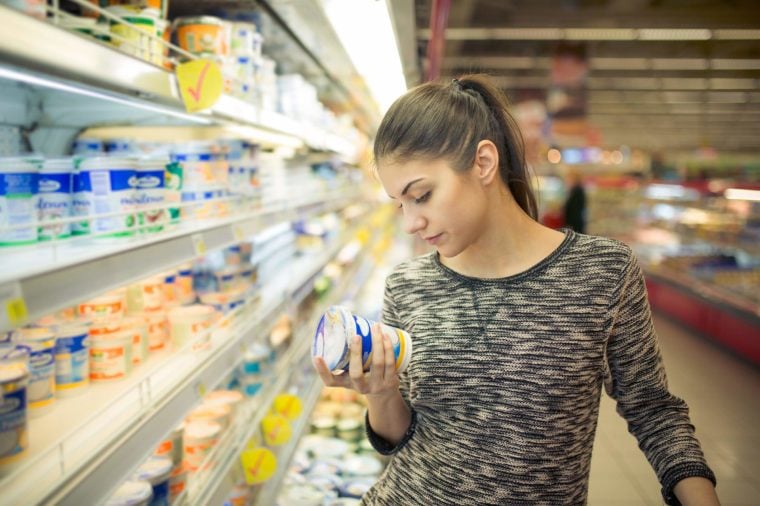 Eldar Nurkovic/Shutterstock Buy-one-get-one deals, or even buy-two-get-three deals, are always a draw for people trying to buy bulk at a grocery store, But what make’s Harris Teeter special is the secret behind those deals. Instead of offering one item full price and another completely free, the items just ring up as half off. So if you only need one pound of meat and don’t have room in your freezer for another, that meat will still ring up as 50 percent off! Don't forget these ten grocery store shopping tips you need to know. 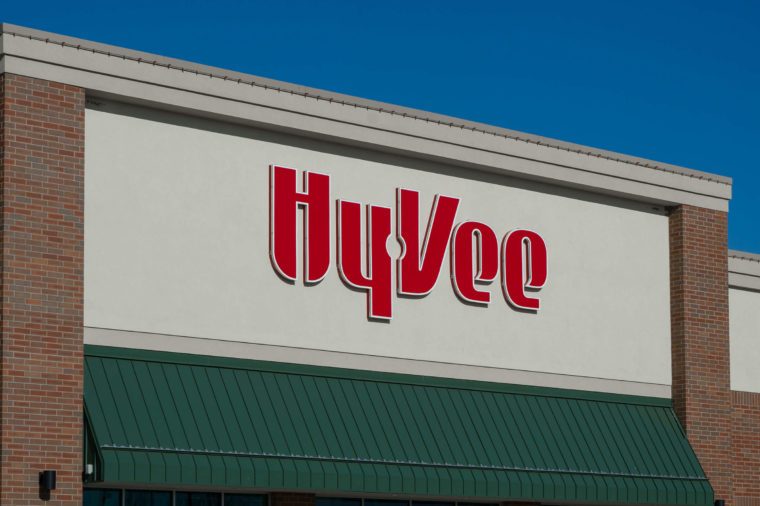 Ken Wolter/Shutterstock Loved the fuel saver program through Hy-Vee? Well, their new-and-improved program is going to have you jumping out of your seat. With this new membership, you can save big using digital deals and coupons target specifically for your shopping list, receive surprise savings, and even get the chance to win rewards! Some of those include kitchen makeovers, vacation packages and even a new car.

The back of the store at Costco 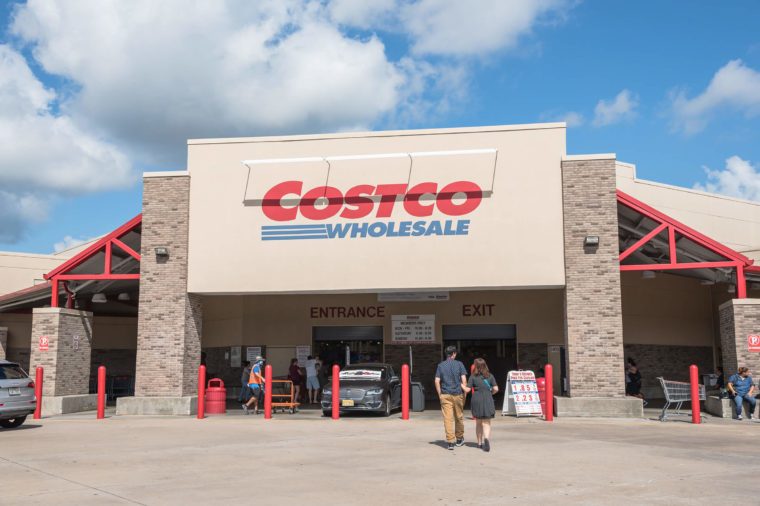 Trong Nguyen/shutterstock That’s right—the back of the store is where you’re going to find all of the deals. By working your way forward, you are finding the best bang for your buck. Make sure to walk through “center court” (the savings aisles in the center of the store) and to avoid the front at all costs. The front is known as “action alley” and will rarely give you the type of deals that you crave. Check out these money-saving things you can do at Costco without a membership.

The jobs at WinCo 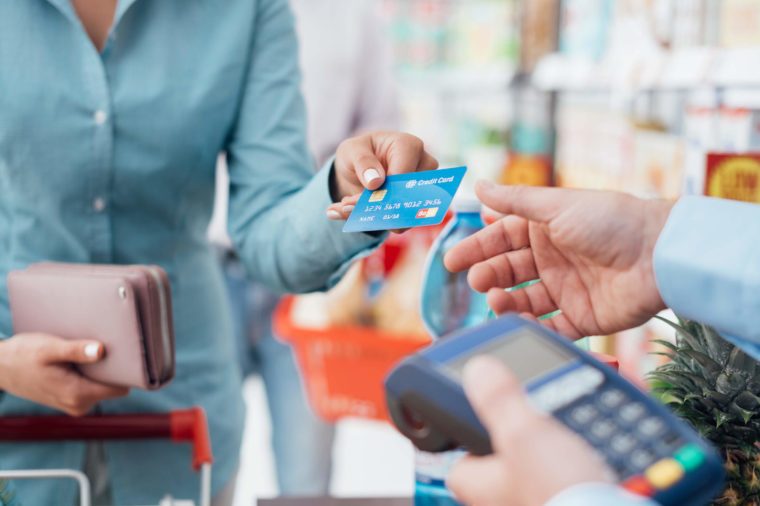 Stokkete/shutterstock Not only are WinCo deals even cheaper than Walmart most of the time, they also offer incredible employee benefits. Like being a part-owner of the store, for example. If you work at WinCo for over 500 hours in the first six months and 1,000 hours in a year, you are eligible for the Employee Stock Ownership program. They also offer incredible benefits including retirement savings and insurance.

The app from Whole Foods 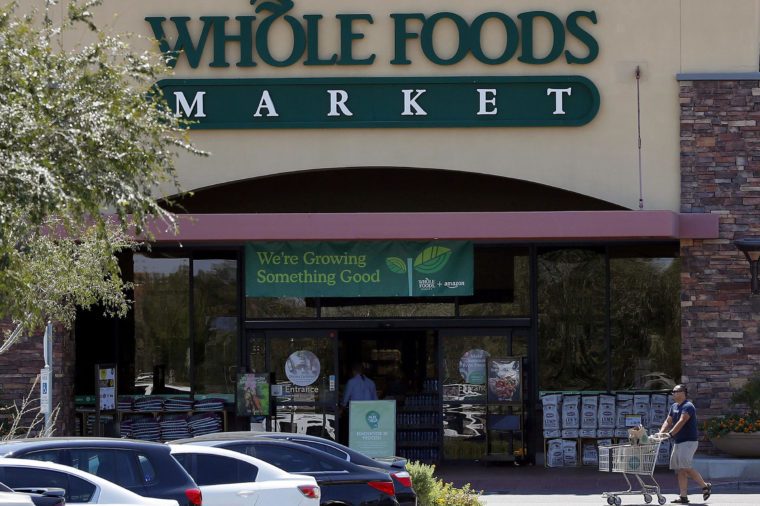 AP/REX/Shutterstock Whole Foods may sit more on the expensive side, but their app can actually help you save those dollar bills. It’s completely free and loaded with coupons and current deals, giving you a leg up on what to grab in the grocery store. 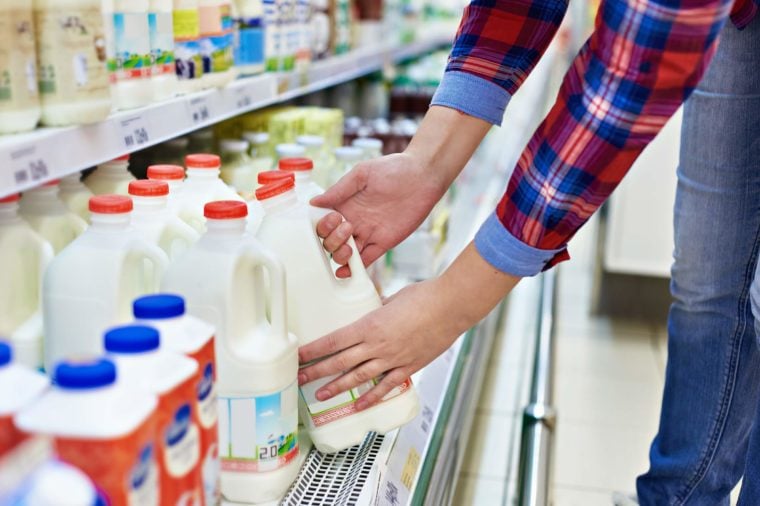 Sergey Ryzhov/shutterstock Because Fry’s is a Kroger brand, these two offer the same incredible deal every week—free item Fridays! Find out what you can get for free by downloading the coupon the day before heading to the grocery store. 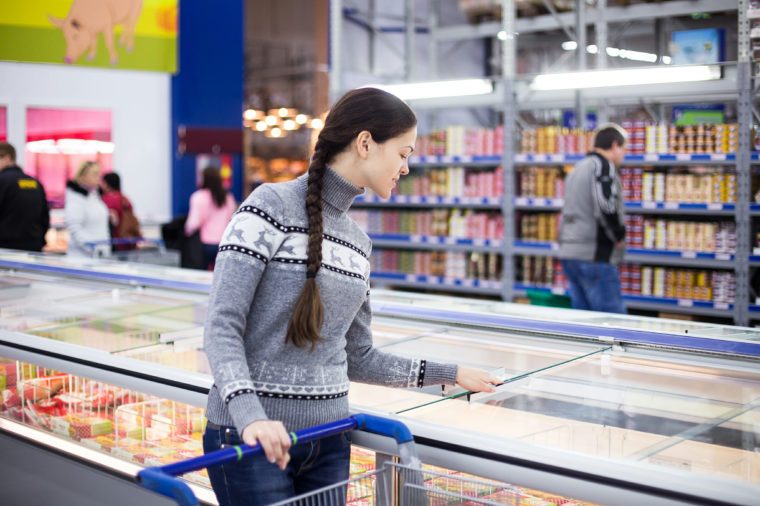 Goncharov Artem/shutterstock Every week Winn Dixie offers meal deals where they hand you not one, not two, but three items for free. The meal deal typically comes with a specifically chosen entree. Once you get the entree, you can get the chosen sides (typically a carbohydrate, a vegetable, and a dessert) for free. 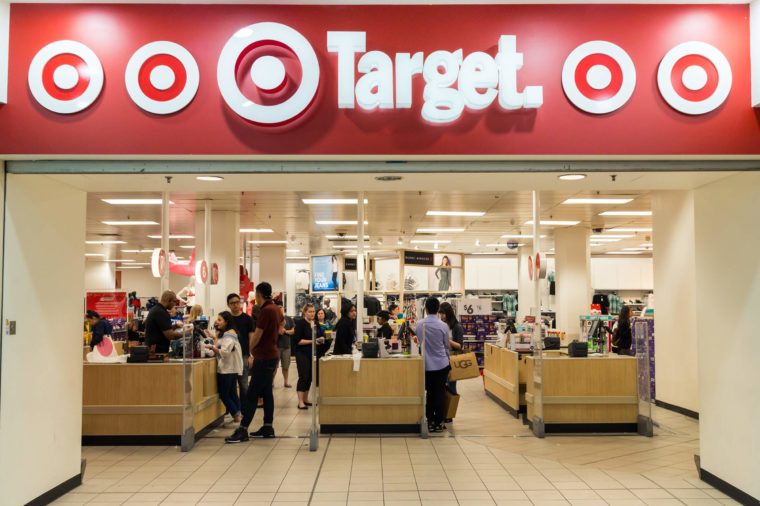 Nils Versemann/Shutterstock You may not realize it, but most department stores work off a markdown schedule in certain departments each day of the week. Although every store is different, shopping at Target’s Market (the grocery part of the store) is best for savings on Tuesday. However, there is no harm in asking a sales associate when your local Target’s specific markdown schedule is. Here are more sneaky ways to save money at Target. 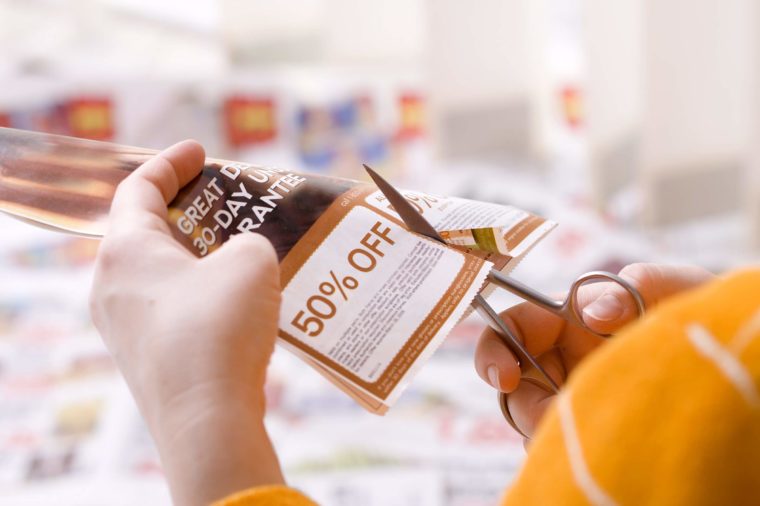 igor kisselev/shutterstock If you still love to get coupons mailed to your home, then you better be digging for those ShopRite super coupons. These coupons will offer you deals you probably couldn’t even dream about and will make your wallet sing songs of praise. You can also check out a lot of their other coupon deals online at their Digital Coupon Center.

The MVP kiosk at Food Lion 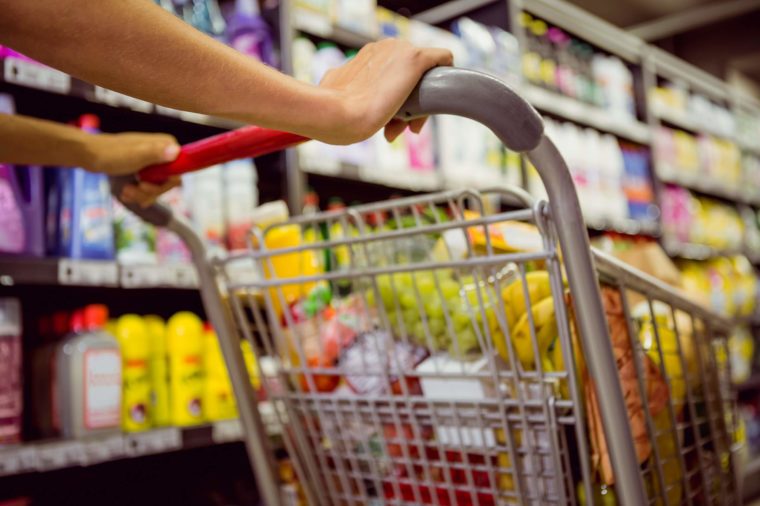 wavebreakmedia/Shutterstock After signing up for the MVP Program at Food Lion, you’ll want to take advantage of their kiosk ASAP. Simply scan your MVP card when you’re in the store to see what deals are going on for that day, and even a set of personalized coupons based on your recent purchases. But be on the lookout for these 32 retail scams that trick you into spending more. 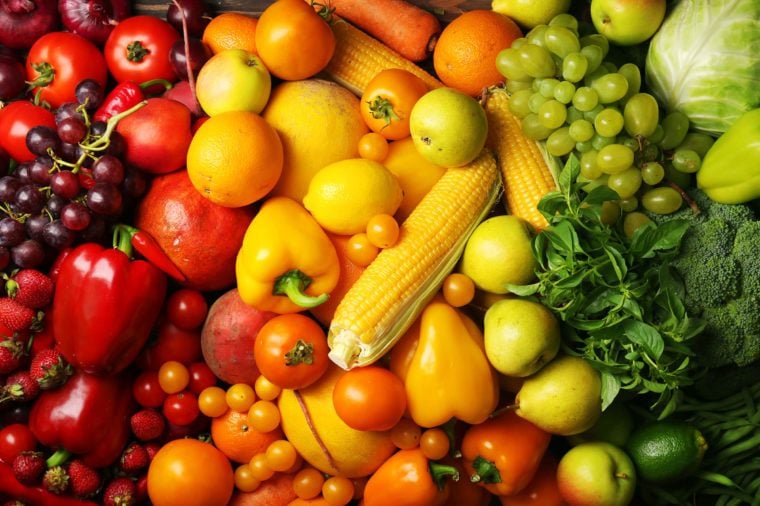 Africa Studio/Shutterstock Just like their Everyday Low Prices and Club Card Savings, Albertsons offers deals on their healthy products by using their SimpleNutrition tags. So instead of ignoring those healthier foods because of the prices, scout Albertsons for these tags to save big and eat healthily. 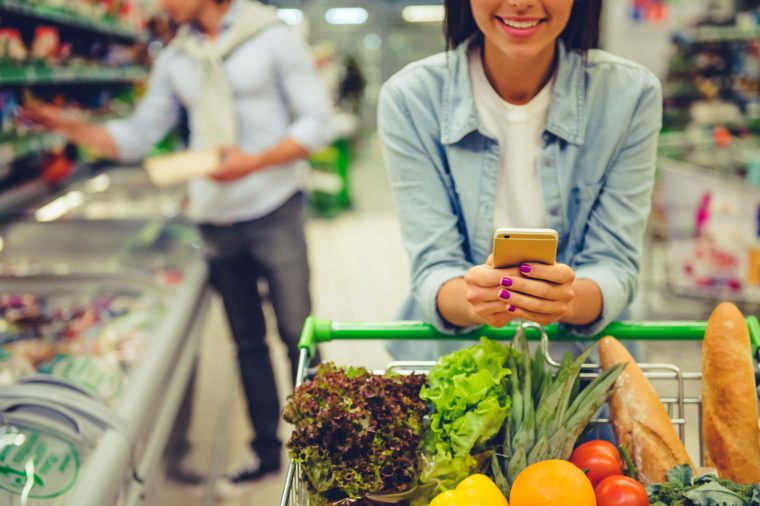 George Rudy/shutterstock Every now and then, Meijer will post codes on their Facebook and Twitter for mPerk members to get free items. They offer all sorts of items for free, and if you follow them on social media, you’ll always come across some incredible deals. Make sure you memorize the best times to buy cheap finds throughout the year.

Cash back at Sam’s Club 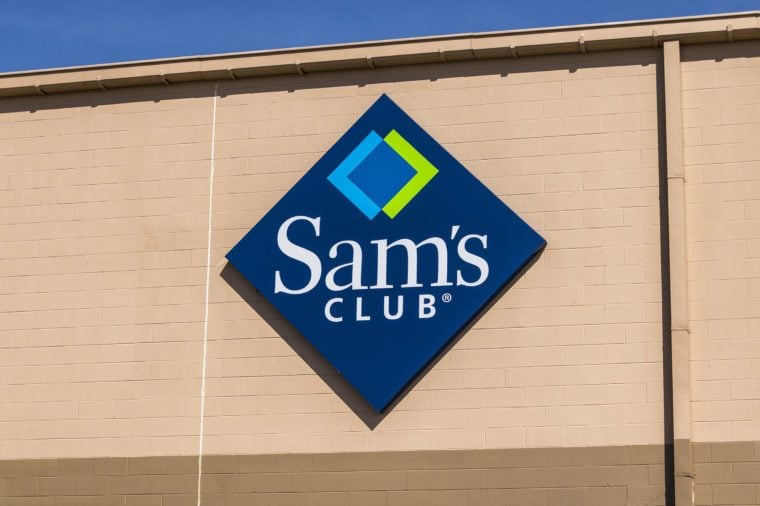 Jonathan Weiss/Shutterstock That’s right—they just hand it to you! For every $500 you spend, you get $10 back. That may not seem like a lot, but if you’re a faithful Sam’s Club shopper, that can seriously add up as the year progresses. Don't miss these other surprisingly simple ways to save big at the supermarket. 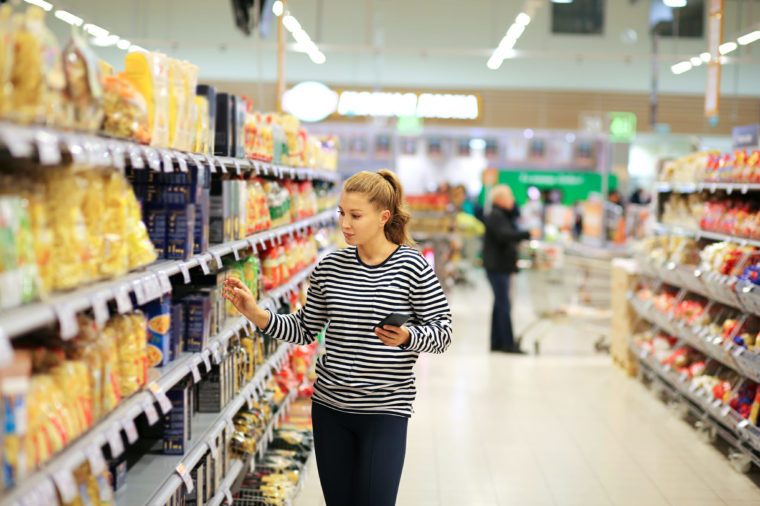 LADO/Shutterstock If you have a Stop & Shop card (or a Giant card, since they are owned by the same company) you can actually earn cash back when using some of the offers. Just click the offers you want to use on the app. 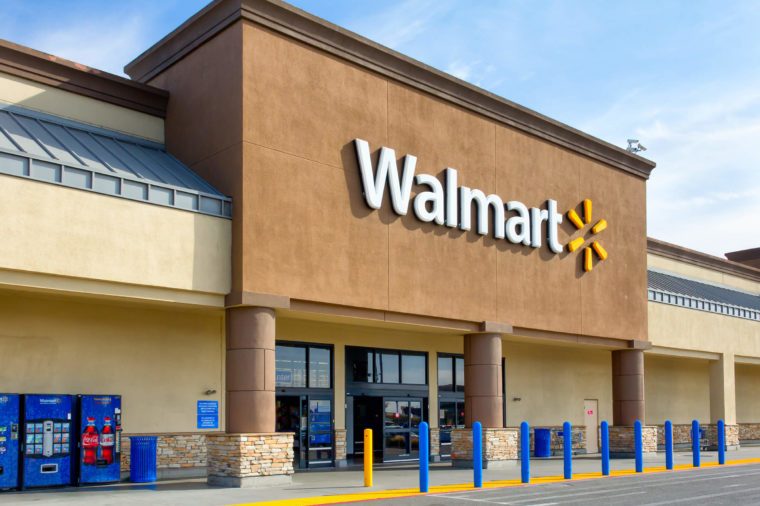 Ken Wolter/shutterstockSaw a cheaper price somewhere else? Bring those ads with you to Walmart! You can get the cheaper deal by showing the associate that pricing, who can then walk you through a process to get that same deal right at the store. Wherever you shop, just make sure you avoid these 50 supermarket tricks you still fall for.

If Pork Could Talk, Here’s What It Would Tell You

11 Things You Didn’t Know About Doritos