When my valentine cards ended up in a 40-feet-well, my brother tried to rescue them—until we had to rescue him. 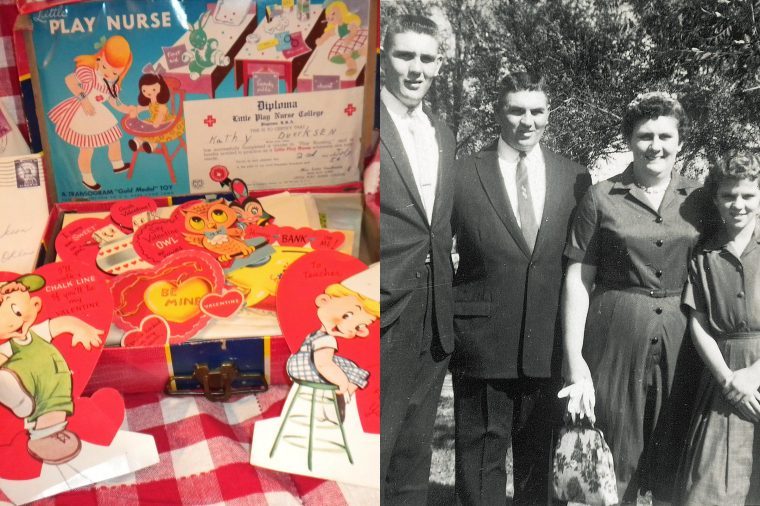 I screamed when I saw how empty the garage looked. Then I ran into our farmhouse, wailing, “Mom, where are my valentines?”

I was in the habit of storing Valentine’s Day wishes from my classmates in a red cardboard box that I kept in the garage. I figured they were safe there—until I came home that day in 1958. I quickly realized the awful truth: My box was among the many items my mother had discarded while clearing out space for a hired hand’s cot. (These greeting card stories are cute and memorable.)

There weren’t many valentines in the box, because our school in Corn, Oklahoma, was very small. And in terms of quality, they were the cheapest kind. But when I was 11 years old, they mattered a great deal to me—cherished reminders of great times and good friends. I was inconsolable about the loss.

Mom hadn’t known the old box held my precious valentines. But she did know where they were—sitting atop a mound of rotting trash at the bottom of a 40-foot-deep hole on our land, dug by a farmer in a futile search for water. We called it ‘the well’ and used the hole as a dump for trash we couldn’t burn.

As Dad aimed a flashlight down into the hole, my older brother, Ken, volunteered to retrieve the box. He was enjoying a rare day off thanks to rain the night before that made harvesting wheat impossible.

Dad got out one old rope and one new rope. He tied the ends of both ropes to our tractor, then wrapped the other two ends around Ken’s thighs and shoulders, leaving his hands free to grab the valentines.

At almost 6-foot-5 and more than 200 pounds, Ken was no ordinary 14-year-old. So it wasn’t easy for Dad and the hired hand to lower him into the hole, which was only about 6 feet across.

Ken went down feet first, rappelling off the sides. Things seemed to be going well until he was about halfway down, when the older rope around his left leg broke.

Mom and I screamed. Ken was swinging like a piece of meat, hanging upside down by his right leg. As he later described it, “I was freaking out, and being pretty vocal about it.”

He said later that he actually thought he would die in that well. To make matters worse, the trash really stank—and as he dangled there, he saw a frog and a lizard, which made him imagine snakes and rats and every kind of venomous creature.

Soon Ken slipped down even farther, until he was lying atop the trash—but not for long. He grabbed the box of valentines, leaped up, clung to the good rope and shouted up through the opening above him.

Through the growing panic he felt in his own heart, Dad kept talking Ken through the ordeal. He and Alvin, a neighbor who had come to watch the rescue, lowered some logging chains. Doing his best to stay calm, Dad told Ken to hook himself on firmly, because if he fell 30 feet or so, he would break his back or his neck and die in that hole.

Then Dad and the hired hand tried to pull him up, but he was too heavy. So the hired man started the tractor and slowly drove away from the well, while Dad and Alvin guided Ken out. At the top, each of them grabbed one of Ken’s arms, pulled him out and unhitched the chains.

“Are you OK?” Dad asked. “Yeah,” Ken replied. Then he fainted, dropping the box of valentines as he pitched headfirst into some mud. I tearfully thanked him as I picked up the valentines, which had popped out of the box and fluttered to the ground. And ever since that day, I’ve stored them in a safer spot—my closet.