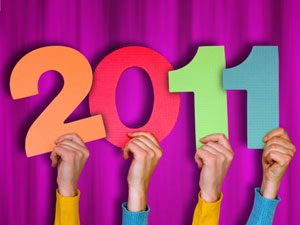 © Hemera/Thinkstock
What with all the office parties to attend and Christmas Story reruns to watch, it’s understandable that publications don’t have time to produce real news (by the way, that’s why we put out our double issue around then). So to fill empty space, magazines, newspapers, and websites spend their time leisurely looking back on the past year and compiling top 10 or top 15 lists if they didn’t have too much fun at the parties. We had so much fun at our office party we couldn’t even be bothered to compile our own lists, so we cribbed from our favorites — compiling an entrée or two from several sites that we found to be funny, fascinating, and sometimes touching. And in case you don’t believe we pulled the best, we added a link here and there to the list so you can see for yourself.

Seek and Ye Shall Find!
What were people searching for online in 2011? Depends on which search engine you ask:

Of Yahoo’s top 10 searched terms, number one was: iPhone.

Googlers were looking for something different. Google’s number one search was: Rebecca Black

Mad Hatters
What was the best hat topping a head that didn’t belong to Princess Beatrice? The Huffington Post had a veritable runway full of them.

Picture This
The year 2011 was chock-full of photo ops, some fun, others dripping with despair. Of the numerous ones picked by Yahoo’s editors to be part of their photo-of-the-year roundup, this is the one that kept us up nights.

Calling Dr. Frankenstein!
The past year offered MSNBC scads of candidates for its Weird Science Award. Here’s our favorite because it’s so … weird!

Glowing Dog Has an On-Off Switch
“In past years, our Weird Science Award winners have included glow-in-the-dark kitties and glow-in-the-dark puppies. How could scientists possibly top that? Would you believe a dog with a gene that turns the fluorescence under UV light on or off, depending on whether a particular drug is added to its food? That’s exactly the kind of dog that South Korean scientists produced in 2011. Why, you ask? Well, the ultimate aim of these glow-in-the-dark exercises is to splice in genes that can help treat diseases—and having an on-off switch would give physicians more control over the treatment. That feat would make other researchers turn green … with envy.”

Down the Tube
There were plenty of reasons to turn on the television last year and just as many to turn it off. USA Today offered its best and worst on TV list. Here are two winners and one loser:

Eat, Drink, Man, Woman
Delish.com served up some of 2011’s most mouthwatering food events. Here’s one we wish we had been invited to:

New Dating Site Matches Singles by Fridge Contents
Restdejtiing, a new dating site in Sweden, uses a unique formula to match prospective mates. Members enter up to five ingredients they have in their refrigerators, which are posted on Facebook, where other users can see them. If one user has leftover Chinese and another has a bottle of soy sauce, it could be a perfect dinner date match.

Nine Stories From a Year That Might Have Been
What could have been the top stories of 2011? The New Yorker imagines different scenarios from those stories that actually played out last year. Here’s one we found particularly worrisome:

The Fall of Tokyo: As the tsunami wave recedes, TEPCO makes all the wrong decisions; the government keeps one too many secrets; there is a crucial failure of communication at just the wrong moment, and reactors 1, 2, and 3 at Fukushima Daiichi not only suffer a meltdown but burn and explode uncontrollably. No one can get to the spent-fuel pool at reactor 4, or keep it and the others from being the source of further radiation releases. Radiation counters between there and the capital and beyond spin upward. One of the world’s great cities is abandoned, scarring Japan and shocking the world’s economy.

Music to Our Ears
If you work at Rolling Stone magazine, you’re going to hear a lot of music. And out of all the CDs released last year, the favorite album was: Adele 21, by Adele.

Best Single:
“Rolling in the Deep,” by Adele

“Room Service, I’d Like to Order Kristen Wiig”
What did travelers do this past year? They ordered loads of films in their hotel rooms. According to USA Today, of the top 10 Hollywood movies ordered in hotel rooms in 2011, these were the top three:

Why They Don’t Use Hands in Soccer
Sports Illustrated knows a thing or two about the thrill of victory and the agony of defeat. One of its choices for Least Monumental Moment in Sports pulled off the rare feat of combining both:

“Real Madrid waited 18 years to win back the Copa del Rey trophy and succeeded in April by beating Barcelona. Afterward, Madrid’s Sergio Ramos, standing atop a bus that drove through the city streets in celebration, allowed the silver cup to fall from his grasp, whereupon it was flattened under the bus’s wheel.”

What the Tech!
Wired.com is often the first to break the top tech news. Conversely, here is one entry from its Top 10 Tech Things Nobody Cared About in 2011:

Headline News
A lot of things happened over the past 365 days. But often, the real news was in the headlines. Acidcow.com compiled a list of Top 50 Funniest Newspaper Headlines From the Past Year. Here’s the article we were dying to read:

“Woman Missing Since She Got Lost” — Chicago Sun-Times

Calling the Fashion Police!
What did the stylish wear in 2011? You wont find it on Yahoo’s list of Fashion That Makes Us Sad (roadkill couture anyone?). Our favorite: DSquared2 Skate Moss shoes — stiletto heels attached to ice blades.

Do You Know Where Paris Is?
As the Daily Caller proved in its list of the Top 10 Dumbest Celeb Tweets, once you hit Send, there’s no pulling back the stupid. Paris Hilton should have known that when she tweeted, “No, no. I didn’t go to England. I went to London.”