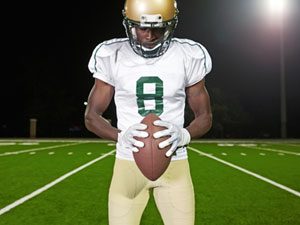 Getty Images
I was in town visiting a former NFL lineman. Call him Max. The hotel restaurant was closed, so we ate at the bar.

During his time in football, Max was hit in the head. A lot. He has since endured nine brain surgeries. He has serious trouble remembering things, as the main character in the movie Memento did. Max and I were both carrying notepads, but for different reasons.

There was a game on. Saints–Cardinals. The first contest of the NFL preseason. Max had his back to the television. Once upon a time, he was an avid hunter. He owned a successful business. Today, he’s unemployed. Pretty much broke. Lives in a trailer outside his brother’s house. He probably shouldn’t drive, probably shouldn’t own guns. He gets angry. Has a hard time sleeping. Misses his family. His estranged wife and children are afraid of him.

On the television behind the bar, a Cardinals receiver caught a pass. A Saints defender dutifully drilled him, slamming the receiver’s helmet into the turf. The guys at the bar cheered. I was drawn to the replay, slow-motion and high-definition, the whiplash bounce of the receiver’s skull. I wondered how much of the play the receiver would even remember. 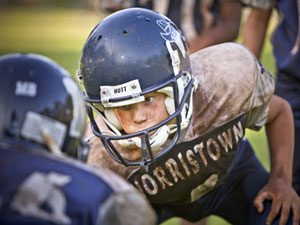 Richard Schultz/Corbis
This is going to sound strange coming from a sportswriter for a sports website. But this season, for the first time I can remember, I’m not watching football. Slowly, over time, I’ve found myself worrying more and enjoying football less. I’ve come to feel that seeing people ruin themselves for entertainment’s sake isn’t just sordid. It’s ghoulish.

Everyone knows that football physically destroys its participants from the outside in—breaking bones, smashing shoulders, shredding ligaments. It’s just that no one really cares. A football player goes down, writhing in pain. A trainer jogs in from the sideline. Cut to commercial. The end. The entire scene is routine and mundane.

Brain damage destroys lives from the inside out—not only what people can do but also who they are. For much of the past two years, I’ve been reporting and writing on football’s concussion crisis, which is less a crisis than an everyday state of affairs and hardly limited to concussions. (Big hits, little hits: They’re all unavoidable, and they all add up.) I’ve met parents mourning the death of their teenage son; former players who get lost driving around their own neighborhoods; scientists describing in microscopic detail how proud, intelligent men become hollow, half-mad husks. I’ve learned that the NFL can be callous, and fans even more so, and that for many people, ignorance is bliss, even when it involves the health of their own children.

I can’t watch football because of Linda Sánchez, a California congresswoman and member of the House Judiciary Committee. During a 2009 Capitol Hill hearing on concussions in football, with NFL commissioner Roger Goodell slouching meekly in his seat, she likened the league to the tobacco industry. (This is why we watch football on Thanksgiving. )

For decades, Big Tobacco said cigarettes were harmless, backing up that claim with junk science and bogus expertise, working very hard to discredit scientific evidence to the contrary. The league seems to have used the same playbook, Sánchez said. 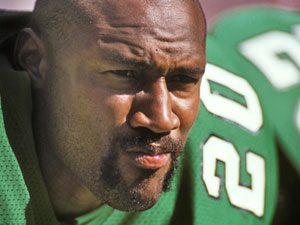 Mitchell Layton/Getty ImagesEagles safety Andrew Waters shot himself at 44.
In 2003, the head of the league’s brain-trauma committee, former New York Jets team doctor Elliot Pellman, a rheumatologist, dismissed a study linking multiple concussions with depression among former players. The committee published a paper claiming that concussions were not “serious injuries” and that there was “no evidence” that concussions produced “permanent or cumulative” damage. Independent scientists strongly disagreed, finding fault with the methodology and conclusions.

When forensic pathologist Bennet Omalu, MD, dissected Hall of Fame lineman Mike Webster’s brain and subsequently published a groundbreaking article in the academic journal Neurosurgery concluding that football-related head trauma causes chronic traumatic encephalopathy (CTE), a mind-ravaging disease associated with repetitive head trauma, Pellman and two other committee members wrote a letter to the journal to invalidate his research. In fact, it wasn’t until 2010 that the NFL started warning players about a link between concussions and long-term brain damage.

That was three years after former league concussion-committee cochair Ira Casson told Bernard Goldberg of HBO’s Real Sports that there was no evidence that multiple head injuries increased the risk of depression, dementia, or early-onset Alzheimer’s.

Currently, more than 3,500 former players and surviving family members are suing the NFL, essentially attempting to hold the league liable. I have no idea if the plaintiffs will win. I know they have a moral case. I also know that the various lawsuits—and anyone who cares about football should read a few—make it awfully hard for me to feel good about the sport. It’s also hard to feel good about all the rationalizations that go into being an informed, socially aware football fan:

• Those money-grubbing, ambulance-chasing ex-players knew what they were getting into. Now they’re complaining? Tough luck. Why can’t they just leave football alone?

• OK, fine. They didn’t know. Today’s players do. And they’re fine with the risk. Who am I to feel differently?

• Football is culturally irreplaceable. It teaches important values, like teamwork and self-sacrifice. It gives young men an outlet for aggression.

• You can suffer a concussion driving a car. Or riding a bike. Life is risky. Football is risky. Sure, we should minimize the risk. But doing so is enough to keep on enjoying the sport, right?

But here’s the thing about football, the thing that separates it from everything else, that makes the sport exciting, the thing that’s so hard for me to reconcile: The hits aren’t accidents. They’re pretty much the point. 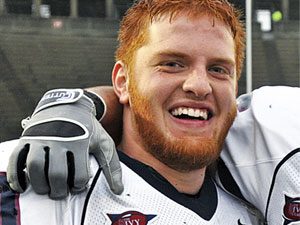 Courtesy University of Pennsylvania AthleticsPenn captain Owen Thomas hanged himself at 21.
I can’t watch football because of Ann McKee, MD, a neuropathologist and codirector of the Boston University Center for the Study of Traumatic Encephalopathy, who studies the brains of deceased football players. We met in the morgue. McKee held a white plastic bin that contained a human brain, immersed in preservative fluid, yellow-green and translucent. It looked pickled.

“This is from a 29-year-old individual,” she said. “There’s been a shrinkage of the brain.”

Another bin. Another former pro. “Very small temporal lobes. This looks like CTE. Wow. Pretty amazing. I think this will be a good case.”

McKee was speaking as a research scientist. As a football fan—as the kid sister of two brothers who played the sport—she knows the larger truth. There are no good cases. Football hits pull the brain like Silly Putty, stretching and shearing nerve cells. Some hits cause concussions. Some do not. The damage accumulates, regardless: Boston University researchers estimate that the average high school lineman takes 1,000 to 1,500 hits to the head each season, some at forces equivalent to or greater than a 25-mile-an-hour car crash.

“You look at these brains, and it’s like, ‘It wasn’t really him. It was the disease,’” says McKee.

The Boston University Center for the Study of Traumatic Encephalopathy has released test results for the brains of 20 deceased football players. Nineteen showed evidence of CTE. McKee has many more brains to examine, and hundreds more are pledged by athletes who are still alive.

These are the words McKee uses to describe the clinical symptoms of CTE: Impulsivity. Disinhibition. Volatility. Problems with depression and emotional control. And this is how Mike Webster, later diagnosed with the disease, spent his final months: living in his truck, squeezing Super Glue on his rotting teeth, shooting himself with a Taser gun to sleep, and sniffing ammonia to stay awake. 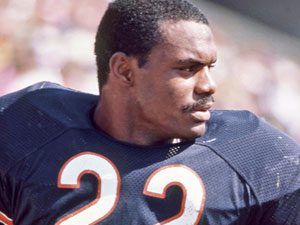 Michael J. Minardi/Getty ImagesDave Duerson, NFL safety, shot himself at 50.
I can’t watch football because of Gil and Michelle Trenum. Two years ago, their son Austin suffered a concussion during a high school game. An alert trainer pulled him off the field. ER doctors checked him out. He went home. He seemed OK. A day and a half later, he hanged himself.

There was no suicide note. Austin was a happy, healthy kid. A good student. Popular and well liked, the type of guy you hope your daughter dates.

The Boston center physicians examined his brain. They didn’t find CTE, but they did find a multifocal axonal injury, damage to fibers that connect nerve cells. Doctors strongly suspect the injury led to Austin’s sudden, inexplicable decision. Gil and Michelle have since become advocates for concussion safety. Grieving parents seek them out, anguished calls and e-mails from people they’ve never met. The Trenums are the bravest people I know. Still, they hurt. They live with a hole. It will never be filled.

“Even when we have a good day, we still know he’s gone,” Michelle says. “We can be happy. We can laugh with our friends. But we still know.”

Robert Cantu, MD, a leading sports concussion expert, says in a new book that children under 14 years of age shouldn’t play collision sports under current rules, an argument he suspects will “tick some people off.” However, I wonder if Cantu goes far enough. College football is a multibillion-dollar, taxpayer-subsidized business. That’s a lot of public investment in head trauma.

Football’s popularity seems to grow every year. How long will that last? My colleague Will Leitch recently asked in New York magazine if following football was morally wrong. “There are no big TV contracts or player salaries without fans tuning in. We’re all part of the problem,” he wrote.

Are we? Am I? I know only this: There’s definitely a problem, an ugly one, and I’ve seen too much of it to keep watching.