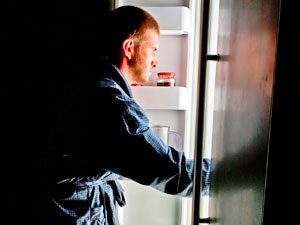 If a pressing work deadline has you staying up later than usual, don’t be surprised if you have to start squeezing into your skinny jeans.

After a week of getting just five hours of sleep each night, people gained an average of two pounds, according to an interesting new study from sleep researchers at the University of Colorado. Although links between lack of sleep and overweight are not news, this study is unique because of its tightly controlled experimental design and setting.

In the experiment, 16 people, divided into two groups, spent two weeks in a special room where researchers could closely track their sleeping and eating habits. They were allowed to eat whatever they wanted. During the first week, one group went to bed at midnight and woke up at 5 a.m. while the other group got nine hours of sleep a night. During the second week, they flipped sleep schedules.

Both groups gained weight during the restricted sleep phase of the experiment, and those who caught up on sleep during the second week actually started to lose some, but not all, of what they gained.

The cause of the weight gain was clear: The sleep skippers adopted different eating habits, reported the New York Times. They ate six percent more calories, much of which was from after-dinner snacks. They ate less at breakfast, and more carbs and fat overall. When they began getting more sleep, they ate fewer carbs and fats.

Study authors note that because the research was short term, they can’t say how sleep deprivation may affect weight in the long term. It’s possible, for example, that the body can adjust after awhile. And while merely snagging more sleep isn’t a silver bullet for weight loss, there are plenty of other good reasons to start hitting the hay earlier—lower type 2 diabetes risk, more brainpower, and better energy levels among them.

13 Tricks for Keeping Your New Year’s Resolutions, from People Who Actually Did