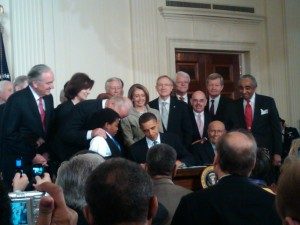 (On March 23, 2010, President Obama signed comprehensive health reform, the Patient Protection and Affordable Care Act (ACA) into law; see photo.)
In its most significant decision since Bush v. Gore in 2000, the Supreme Court upheld the Affordable Care Act (ACA), handing President Obama and the Democrats a major victory. The 5-4 ruling, with Chief Justice John G. Roberts, Jr. joining the majority and writing the landmark opinion, preserved the central achievement of the Obama presidency but only intensified the battle over “ObamaCare.”

Republicans declared themselves more determined than ever to repeal the ACA and presumed GOP presidential nominee Mitt Romney reaffirmed his intention to target the law on his “first day as president.” Watch his full speech, along with President Obama’s remarks, below.

For a tasty sampling of reactions to the decision, including the responses of House Speaker John Boehner (R-Ohio) and Minority Leader Nancy Pelosi (D- Calif), we pulled a few tweets from the roundup at Kaiser Health News.

Victory for the American people! Millions of American families and children will have certainty of health care benefits + affordable care.

Today’s ruling by the Supreme Court underscores the urgency of #fullrepeal of #ObamaCare j.mp/LFJTni #4jobs