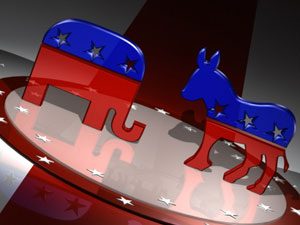 Regardless of where you stand on the political spectrum, the science of what makes people lean liberal or conservative is pretty darn interesting. Turns out that stances on taxes, Medicare, and reproductive rights are not the only things that separate the elephants from the donkeys—recent studies reveal key differences in brain structure and physiological and neurological reactions, according to this neat roundup from procon.org. Among the takeaways (perhaps worthy of their own political debate?):

1. Conservatives are more easily grossed out by disgusting images than liberals.

According to a 2011 study published in PLoS ONE, right-wingers were more likely to have stronger visceral reactions to gross images, like a man eating a mouthful of worms, than people who identified as liberals.

2. Liberals are more tolerant of uncertainty; conservatives are more sensitive to fear.

When researchers conducted structural MRIs of study participants’ brains and compared them to their self-reported political beliefs, they found that greater liberalism was linked to a larger anterior cingulate cortex, which helps monitor uncertainty and conflict. Greater conservatism was associated with a larger amygdala, which affects perception of fear.

3. Conservatives are less open to new experiences than liberals.

In a 2009 study from the Journal of Experimental Social Psychology, researchers had participants play a computer game that “required learning whether [novel] stimuli produced positive or negative outcomes.” Authors found that conservatives were likelier to explore fewer targets than liberals, and that they learned better from negative than from positive stimuli compared to liberals.

What Happens When You Eat Avocado Every Day