When Yale researchers studied 100 women in their late 40s and early 50s who had just entered menopause, they found that women with the most and deepest wrinkles also had the lowest bone density at major sites such as the hip and spine.

Bone and skin share common building blocks, a group of proteins known as collagens, which decrease with age, says study author Lubna Pal, MD, director of the Program for Polycystic Ovarian Syndrome at Yale University School of Medicine. Dr. Pal stumbled upon this research seven years ago, when she presented a study showing that women with low ovarian reserves (egg stores) also had lower bone density. “As many of my patients approached menopause, they complained about changes in their skin and thinning of their hair,” says Dr. Pal. “It made me wonder if similar things were going on inside—as they were losing collagen in their skin, were they also losing it in their bones?”

But don’t panic about the strength of your skeleton if your face is full of wrinkles (and Dr. Pal says we need more long-term studies to fully understand the relationship between wrinkles and fractures). Your complexion is heavily influenced by other factors such as sun exposure and genetics, cautions Felicia Cosman, MD, spokes­person for the National Osteoporosis Foundation, so you may not necessarily need a bone scan.

How You Can Use the News
If you’re going through menopause and have noticed a bevy of wrinkles, talk to your primary-care physician about whether you should have a baseline bone-density scan, especially if you have other risk factors such as a family history of osteoporosis, being overweight, smoking, or heavy drinking (more than two drinks a day).

More Controversial Health Topics:
Are gluten issues caused by C-sections? »
Is depression an inflammatory disorder? »
Is obesity caused by a virus? »
Does the herpes virus cause Alzheimer’s? »
Is electricity making us sick and fat?» 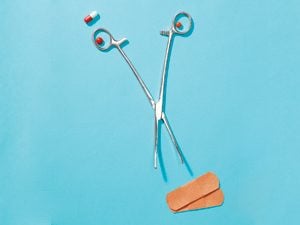