We are vastly, ridiculously, hopelessly, humblingly outnumbered: For every one human cell, there are an estimated ten single-cell microbes in us or on us, at least 100 trillion in all, nestled in our guts and in our urogenital tracts, lying on our skin and happily ensconced in our mouths and noses—entire civilizations of fungi, protozoa, and (mostly) bacteria that eat, breathe, evolve, reproduce, and die.

Before you reach in horror for the hand sanitizer or industrial-strength mouthwash, keep this in mind: A profusion of research in just the past five years is showing that our microbial hitchhikers, collectively called the human microbiota (and so small that they account for only 1 or 2 percent of our body weight), play a key role in maintaining our health. And we disrupt them at our peril.

“It’s not possible to understand human health and disease without exploring the massive community of microorganisms we carry around with us,” says George Weinstock, a professor at Washington University in St. Louis. Knowing which microbes live in healthy people “allows us to better investigate what goes awry in diseases that are thought to have a microbial link, like Crohn’s and obesity.”

The microbes in our body—especially some of the 10,000 or so species of bacteria—have indeed been implicated in disorders as diverse as obesity and Crohn’s and also in asthma, heart disease, sinusitis, and possibly even mood disorders. These bacteria may influence how big or small our appetite is and what foods we crave. They synthesize vitamins and affect how quickly we metabolize drugs such as acetaminophen (Tylenol). Given this robust job description, it’s hardly surprising that scientists are discovering that, when perturbed, the microbiota can tip us into poor health or outright illness.

Next: How our war on germs is wrong » 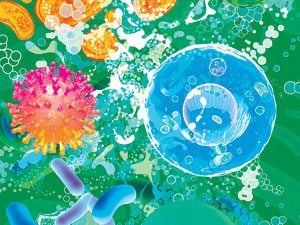 Sean McCabe for Reader's DigestSean McCabe for Reader's Digest
Don’t Destroy the Good Guys
Exactly how our bacterial companions affect our health is the subject of ongoing research, but one thing is clear: Our decades-long war on germs is looking seriously wrongheaded. In an effort to obliterate disease-causing microbes, we are carpet bombing our microbiota—with the antibiotics we down for a cold (even though the pills are useless against a virus) and the antibiotic-treated meat we eat and the hand-sanitizer dispensers that are everywhere you look. And that war on germs takes a huge toll on beneficial bugs too.

One example: The bacterium Helicobacter pylori causes ulcers and has been linked to stomach cancers. Although it was once in almost everyone’s gut, it is now in just 6 percent of U.S. children, Science magazine reported in 2011, probably due to widespread use of antibiotics and antimicrobials. That should mean fewer ulcers, but there’s a dark lining to that silver cloud: H. pylori may ward off asthma. Scientists led by Martin Blaser, MD, of New York University Langone Medical Center found that those without H. pylori are more likely to have had childhood asthma than those with it. Coincidence? In 2011, Swiss scientists infected half a colony of mice with the bacterium and left the rest germ-free. They showered all the mice with dust mites and other allergens. Mice with H. pylori were fine; those without it had airway inflammation, the hallmark of asthma.

Exactly how H. pylori might ward off asthma is still a mystery, but researchers have made progress in understanding the link between our microbiota and other diseases.

Next: Could certain germs cause obesity? »

Feed your svelte bacteria
A few years ago, scientists led by Jeffrey Gordon, MD, of Washington University in St. Louis noticed that fat mice and skinny mice have very different gut microbes. Could certain bugs cause obesity? To find out, Dr. Gordon transferred gut bacteria called Firmicutes from obese mice into thin ones. The thin mice ate no more than they used to, but they quickly started packing on the pounds (OK, ounces). Firmicutes, it turns out, are really good at liberating calories from food, much better than the common gut bugs called Bacteroidetes.

Having more Firmicutes in your gut may allow you to absorb more of, say, the 1,200 calories in half a Domino’s bacon cheeseburger pizza than if you had more Bacteroidetes. “Some microbes change how efficiently we metabolize food,” says biologist Rob Knight of the University of Colorado, who studies the genetics of the microbiota, called the microbiome. This may explain why your friend can scarf down calories and remain slim, while you have merely to walk past a bakery to gain weight. “Obesity depends not just on calories ingested but also on the microbiome,” says Yang-Xin Fu, MD, of the University of Chicago Medicine. Like mice, heavy people tend to have more Firmicutes and fewer Bacteroidetes than slim people.

At this point, everyone asks, How can I get my slim friend’s menagerie of gut microbes? Scientists don’t know yet. But they have some clues. Bacteroidetes—the microbes linked to slimness—proliferate in the presence of fructans, compounds in asparagus, artichokes, garlic, and onions, notes microbiologist Andrew Gewirtz of Georgia State University. On the other hand, stress can decrease the abundance of Bacteroidetes, suggesting one more way stress may cause obesity.

Scientists are just starting to explore how to boost the growth of slimming gut bacteria using probiotic supplements and foods that fuel healthy bugs while zapping the fattening ones with other drugs. These ideas are in their earliest stages, so don’t go looking on your drugstore shelves for such products just yet.

Next: Do antibiotics make us fat? »

Do Antibiotics make us fat?
Our penchant for antibiotics has a downside beyond the well-known problem of breeding antibiotic-resistant bugs. A study of 11,532 children found that, on average, those exposed to antibiotics for usual ills, such as ear infections, before five months weighed more for their height than other kids. By 38 months, they were 22 percent more likely to be overweight. (For ways to avoid unnecessary antibiotics, see box at right.)

“The rise of obesity around the world is coincident with widespread antibiotic use,” says Dr. Blaser. “Early exposure to antibiotics may prime children for obesity later in life.” That’s one reason farmers add antibiotics to animal feed: The drugs alter the gut bacteria in cattle, pigs, and other animals, substituting bacteria that are better at extracting maximum calories from feed, which makes the animals plump up.

Where Good Germs Begin
It’s worth taking a step back to cover the basics, which start with birth. The bacteria and other microbes you enter the world with come from your mom’s skin (if you were a Cesarean baby) or birth canal. “At first, the microbiota all over your body resemble your mother’s,” says Knight. “We don’t know how fast the microbiota of the skin, gut, or nose change, but within two or three years, they’re like an adult’s,” having picked up microbes from air, water, clothing, and diet.

This last part is vital: What we eat shapes what microbes our guts harbor. In 2010, a study found that Japanese people have bacteria that digest nori, the seaweed in sushi. Westerners don’t. Why? The Japanese consume lots of seaweed, which contains marine bacteria, which digest nori. “What you eat,” says microbiologist Justin Sonnenburg of Stanford University School of Medicine, is “one of the major determinants” of your gut microbiota.

Cultivate A Healthy Gut
Where this leaves someone who wants to encourage a healthy microbiota isn’t yet clear. One obstacle: “Nobody knows what an ideal human microbiome is,” says anthropologist Jeff Leach. Last year he launched American Gut, a crowdsourced research project that invites anyone to request a kit ($99), basically a superlong Q-tip that you use to swab used toilet paper and return for analysis. A questionnaire asks about habits and lifestyle: what pets you have, whether you have taken antibiotics recently, what you ate over the past few days, and other behaviors thought to affect the gut microbiota. In return, you get back the list of your gut microbes and how you compare with other people.

Until scientists can give the recipe for healthy microbiota, it pays to heed the advice of mainstream medical groups, which adviserestricting antibiotics to only must-have circumstances, not every cough and sniffle. Consider antibiotic-free meat. “The scorched-earth outcome of many broad-spectrum antibiotics is analogous to spraying poison all over your backyard and waiting to see what grows back,” says Leach.

In both cases, “invasive and maybe not-so-good species” can move in, with harmful results. Be wary of manufacturers making exaggerated claims about probiotics and prebiotics. While some are supported by clinical studies, others “greatly outstrip the scientific evidence,” says Knight. But just because commerce has galloped ahead of current research doesn’t mean there is no scientific basis for manipulating the microbiome to improve health. “We can’t change our first genome, the one we inherit from our parents,” says Knight. “But we can change the second, the microbiome. And that holds real promise.”

13 Tricks for Keeping Your New Year’s Resolutions, from People Who Actually Did