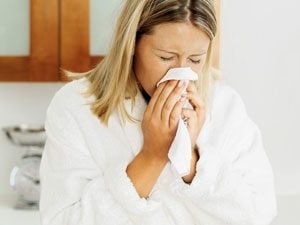 I heard that I can skip the flu shot this year if I got one last year. True?

It’s not a good idea. It’s true that this year’s flu strain is expected to be identical to last year’s (a rare occurrence), so the shot isn’t changing. But studies show that protection starts declining within a year after vaccination, says Ghinwa Dumyati, MD, a professor of infectious diseases at the University of Rochester — possibly sooner if you’re older or have immune problems. So antibody levels from last year’s shot may be too low to defend you. Why take the chance? If you hate needles (and are between the ages of two and 50), there’s always the nasal spray vaccine.

Some may make your colds shorter and milder. The ideal cold remedy would help your immune system work at full throttle to fight off the virus while sparing you the nasty side effects of an amped-up immune system (runny nose, headache, and so on). Some probiotics seem to have that golden touch, says Gary Huffnagle, PhD, immunology professor at the University of Michigan. In one recent study, a probiotic supplement taken daily reduced cold symptoms and shortened colds by an average of two days. The probiotic strains used in that research aren’t yet available in the United States, but keep an eye out for Lactobacillus plantarum HEAL9 and Lactobacillus paracasei 8700:2 from Probi. There’s also some evidence that the probiotics in DanActive may shorten colds.

If I get a cold, is zinc worth taking?

Maybe, but you have to act fast and be willing to put up with some side effects. People who took zinc within a day of the first hints of a cold developed milder symptoms and felt better faster than those who took a placebo, a recent review of studies found. Try a lozenge or syrup — the key is to get the zinc into direct contact with the cold virus in your throat, says Carol Haggans, RD, a nutritionist at the Office of Dietary Supplements at the National Institutes of Health. Studies suggest you need at least 75 mg daily to see an effect; that amount seems safe for short-term use. The downside for some volunteers: mild nausea and a bad taste in their mouth.