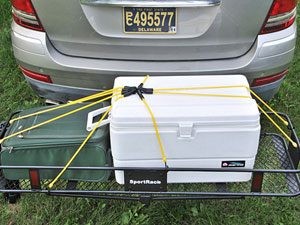 The Perfect Bungee's hooks and loops are crafted from molded nylon and polyurethane.
Portable light switches.
A company called Verve has created a remote-controlled light switch that you can stick anywhere and then move and reattach, reports AOL’s Walletpop. Lower it for a toddler. Keep a switch by the bed to control outdoor lights. Put a switch where the boneheaded electrician should have put one. Price depends on system.

Walls that heat and cool your home.
National Gypsum has built ThermalCORE wall panels with a wax core. When it’s above 73 degrees in a room, the paraffin absorbs the heat and cools the room, reports Fast Company. When it’s below 73, the panels release the heat they’ve absorbed and warm the room.

A cleaner, sleeker fire extinguisher.
Go ahead and unleash it on an electrical fire, suggests Wired. The chrome-plated steel HalGuard HG250C extinguisher contains an “EPA-approved nonconductive liquefied gas” that won’t fry the wires or leave a cloud of residue (like the one you remember from your freshman dorm). Yes, it’s $206, but think of the electrician’s bills you may avoid.

A better bungee cord.
When you have to tie something down — to the roof of the car, to a wall of the garage — you sometimes need a bungee cord without a rough metal hook at either end. Avoid the scraping and gouging with fasteners from the Perfect Bungee, which has an impressive array of cords with tough, gentle hooks and loops of molded nylon and polyurethane. From $3.22 to $7.52; justduckyproducts.com.

A dryer-lint alarm.
It’s no substitute for cleaning out the dryer duct, but LintAlert’s device helps you monitor the airflow (and lint buildup) during the big laundry season (beach towels, bathing suits, more towels, and more suits). Consumer Reports has tested the device; $39.50 plus shipping; find stores at lintalert.com.

14 Handy Hints for Anyone Stuck Inside

Where Does Your Property Line Start?