Get ready, wordies! That's the new word for word-lover, but not all the new terms added to the dictionary this year are quite as straightforward. 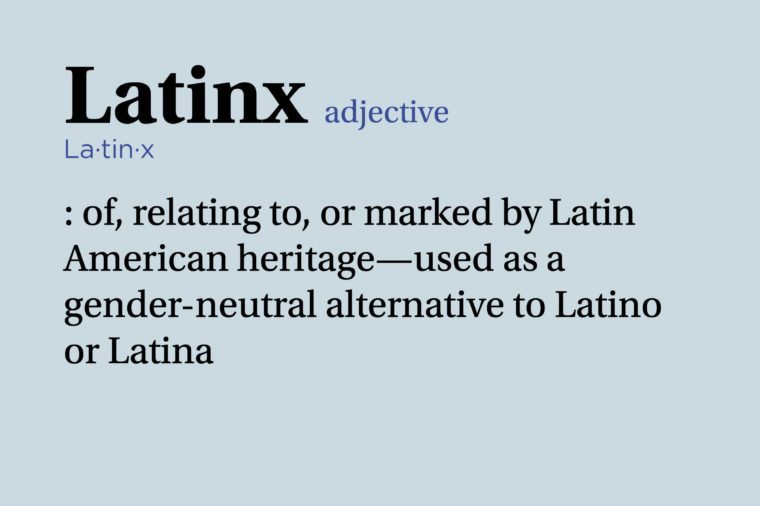 Looking for gender-neutral pronouns and designations? There’s a new cultural wave looking to help with gender inclusivity in language. The adjective relating to Latin American heritage was commonly Latina for female and Latino for male. The new term Latinx, first used in 2007, is the gender-neutral term you can use as an alternative. An example: “The candidate worked to earn the vote of the Latinx community.” Pronounce it with an emphasis on either the first or second syllable, with the third syllable “x,” pronounced as “ecks” at the end. 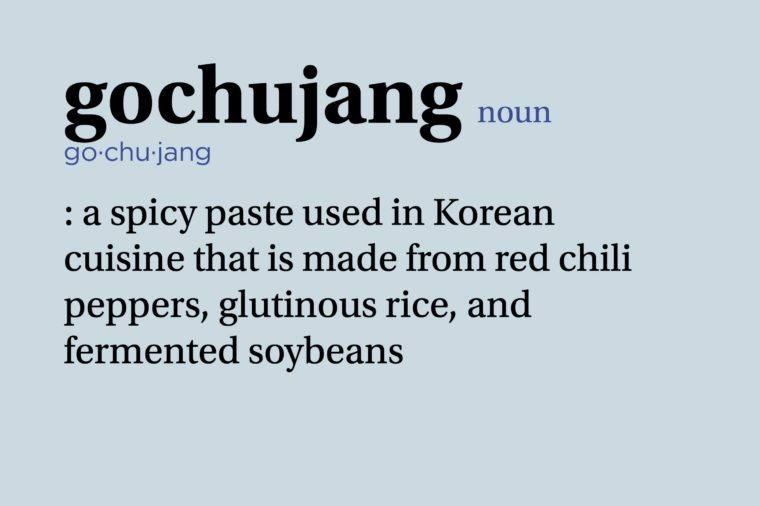 In the mood for some spicy Korean cuisine? If so, it might include the flavorful, thickening paste called gochujang. It’s easy to pronounce once you know where to stress the syllables: go-chu(chew)-jang (pronounce the “a” as “ah”). The spicy flavor in gochujang comes from red chili peppers. Use it like this: “You can find gochujang at most Korean supermarkets.”

This is how words get removed from the dictionary. 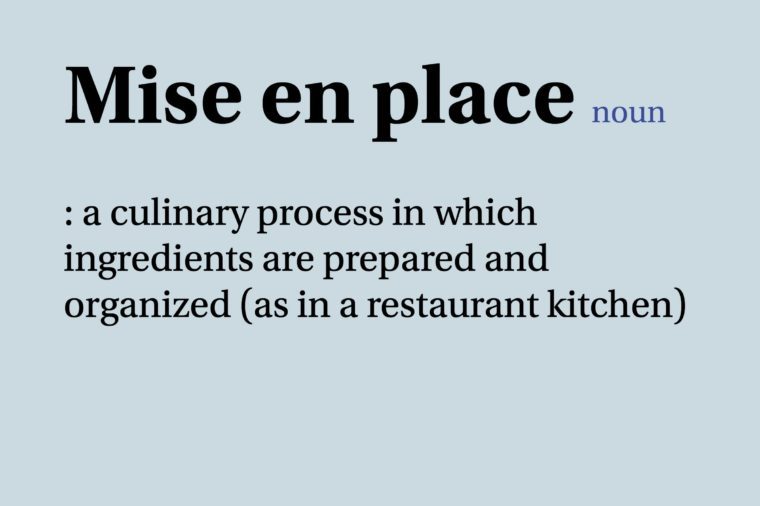 Ooh la la! Here is a French term related to preparing cuisine, and the best chefs recommend it to keep your cooking space efficient and organized. Mise en place refers to prepping and organizing all your cooking ingredients in advance. Use it this way: “The chef relied on mise en place to create perfect timing for each course.” Pronounce it like this: me-zahn-place (with an “ah” for the “a” sound in the last syllable.) Bon appetit! Here are 10 fancy words that will make you sound smarter. 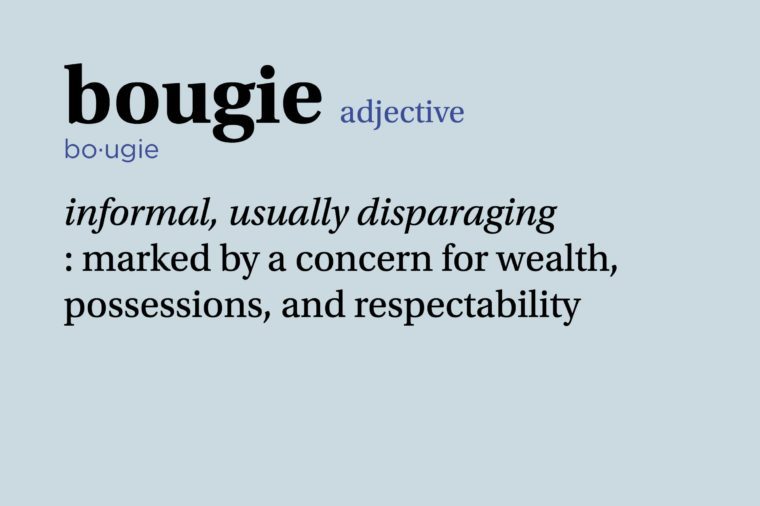 Both bourgeois or bourgeoisie have always been tough to spell (so many vowels!). The terms refer to middle class aspirations for material and social success—especially as it leads toward respectability—even if that status is totally mediocre. Bougie is a new term, usually used as pejorative, to designate shallow types who yearn for wealth and respect. As in: “The Joneses, and people who want to keep up with them, are so bougie.” 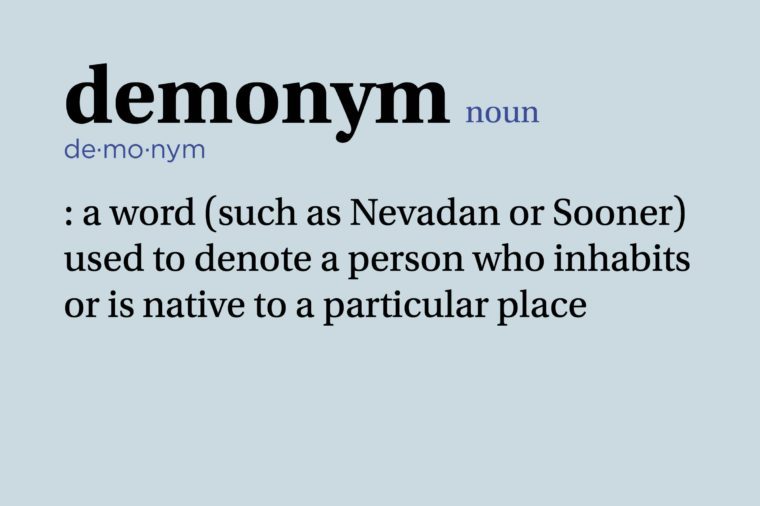 This term does not refer to your demon name! It’s the term used to indicate persons who are native to a certain place, like Hoosiers or Montanans or Californians. It’s useful when you’re conversing with neighbors about what to call yourselves. As in: “Those in the northwest Oregon city often debate if they are Portlandians or Portlanders.” Pronounce demonym like di-ma-nim. Here are 8 more funny words you’d think were made up. 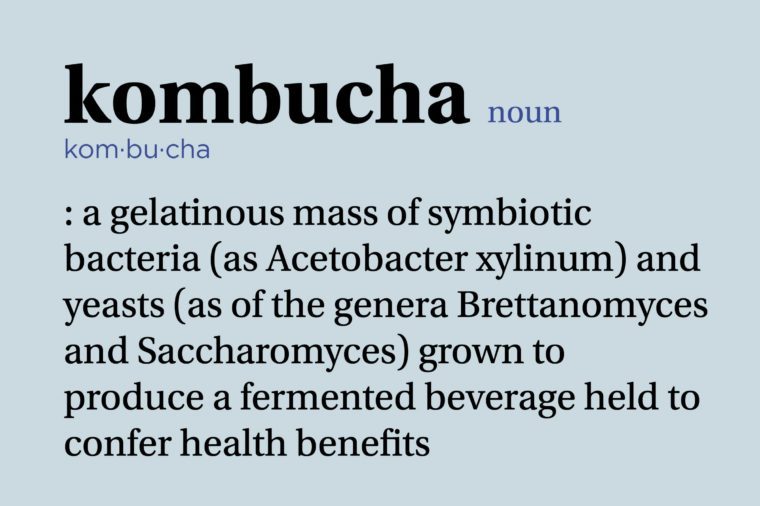 Pronounce the “cha” in this trendy beverage name just like you would the dance: cha-cha-cha. Kombucha contains “a gelatinous mass of symbiotic bacteria,” but don’t worry, it’s good for you. Invite your guests over with the promise of kombucha, said to have healing qualities stemming from probiotics that help the immune system. As in, “Have you noticed a digestive benefit after drinking kombucha?” 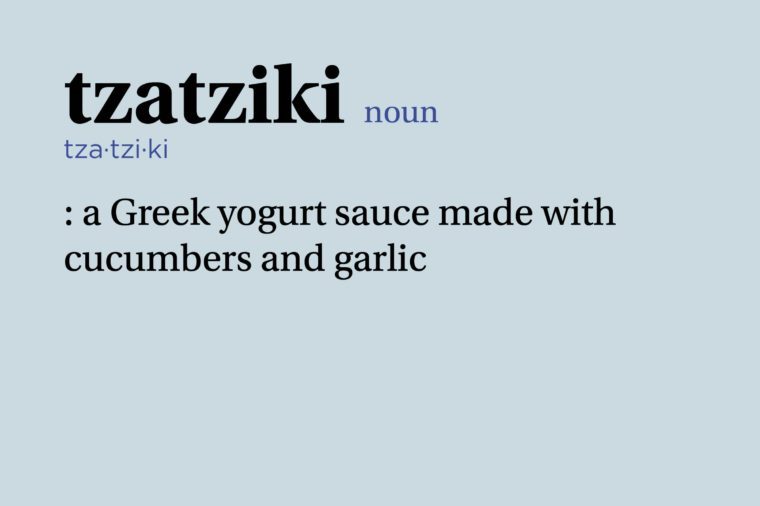 All you need to remember for this word is that you don’t pronounce the first “t”—it’s silent. And that it’s something delicious. Tzatziki is a yummy Greek yogurt sauce created with garlic and cucumbers. Talk about it this way: “Use tzatziki with lamb dishes to add flavor and zest.” Don’t miss the surprising meaning by these 8 really weird words. 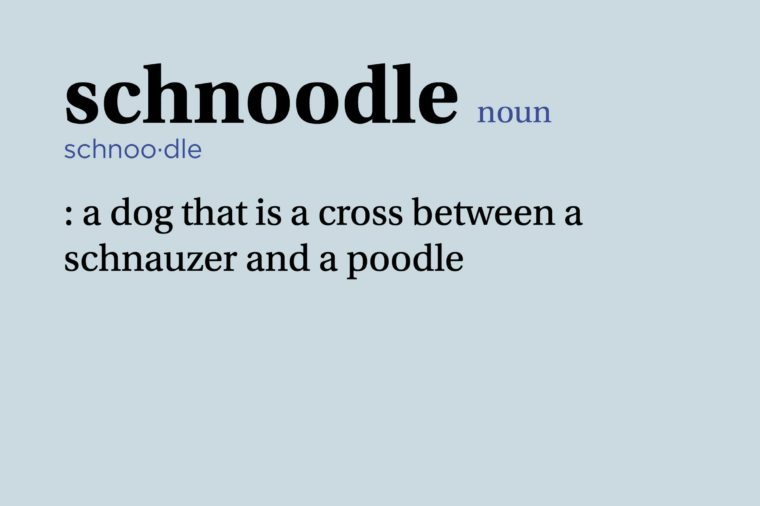 A schnoodle sounds like something that could be tasty. Sorry, you can’t eat this dog breed that’s a cross between a schnauzer and a poodle. You can also add chiweenie (chihuahua and dachshund) and yorkie-poo (Yorkshire terrier and poodle) to your canine vocabulary. As in: “Your schnoodle fur baby is totes adorbs!” Adorbs was also just added to the dictionary—it’s short for adorable. 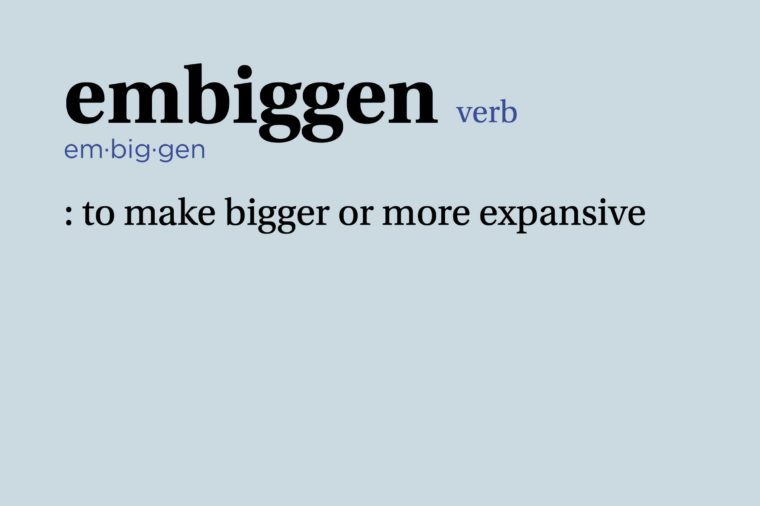 Make sure you spell this funny and informal term correctly so folks know you’re serious about using it. It means to enlarge things. The prefix “em” can mean to cause or provide, and you know what biggen is all about. Use it like this: “I hope this promotion embiggens my salary.” Check out these 7 common words that mean the exact opposite of what you think. 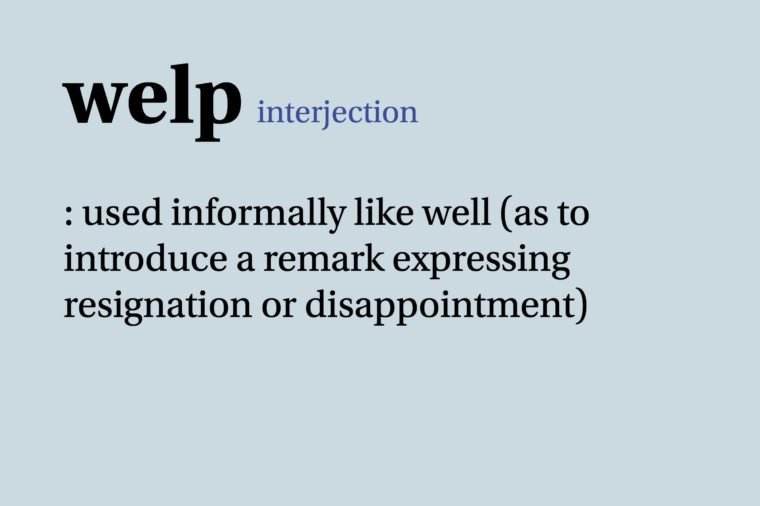 Welp is common slang that’s finally made it to the big time. It’s a slangier version of “well” used to show disappointment or resignation. Be sure to say it with a sigh and a shrug to add drama and an emphasis, as in, “Welp, I guess it’s come to this.” Here are more words that make you sound instantly funnier. 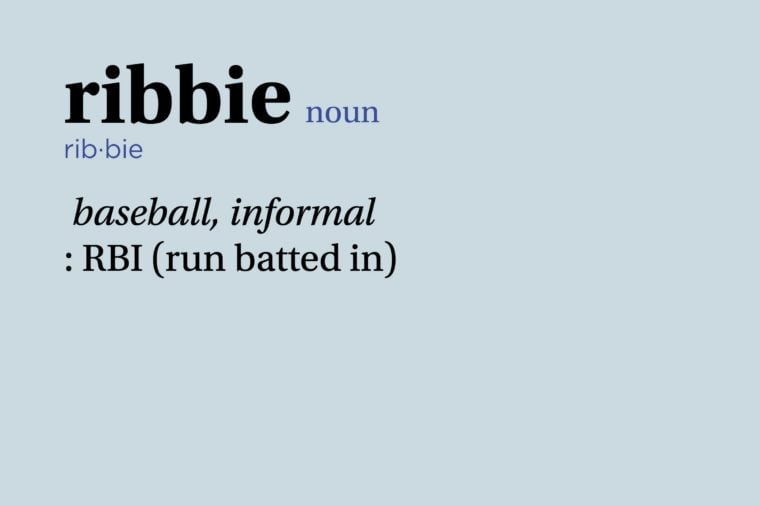 This seems like a good nickname for your rib cage, but it’s actually related to baseball. It comes from RBI, the abbreviation for “run batted in.” It’s informal, and you can guess where it got it’s spelling. Impress players by rattling off their ribbie stats: “You’ve got the ribbie lead with over 50 this season.” 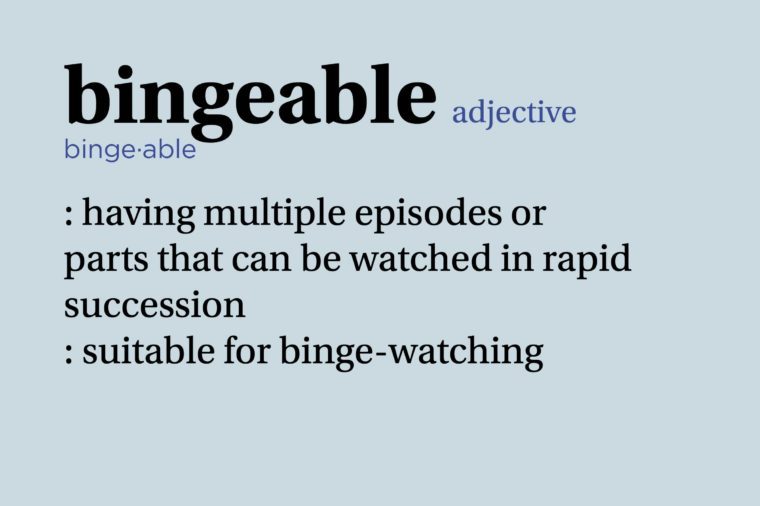 Have you ever stayed up way too late watching an entire season of your favorite show? This term refers to the practice of binge-watching. It’s tricky to spell and pronounce if you’re not familiar with it. Remember that e in the middle. Use it to describe everything you want to overdo. As in, “I stayed up all night watching the most bingeable new show.” Check out these 20 words even smart people mispronounce. 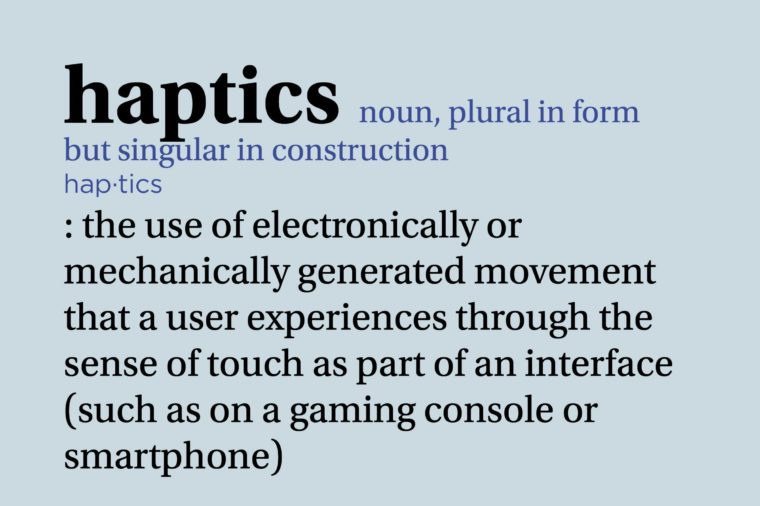 This term gets tricky because it’s a singular noun with an s on the end. Haptics derives from the science of touch, but it’s come to mean the sensations you may feel while playing certain video games. Merriam-Webster defines it as: “the use of electronically or mechanically generated movement that a user experiences through the sense of touch as part of an interface.” Haptics usually occurs through your smartphone or gaming console. Use it this way: “This game controller lets you experience haptics like jolts and buzzes.” Next, find out every word coined the year you were born.