14 Abandoned Castles Around the World

These castles may have been abandoned long ago, but they're still must-see spots. Enjoy a virtual tour of these spectacular ruins. 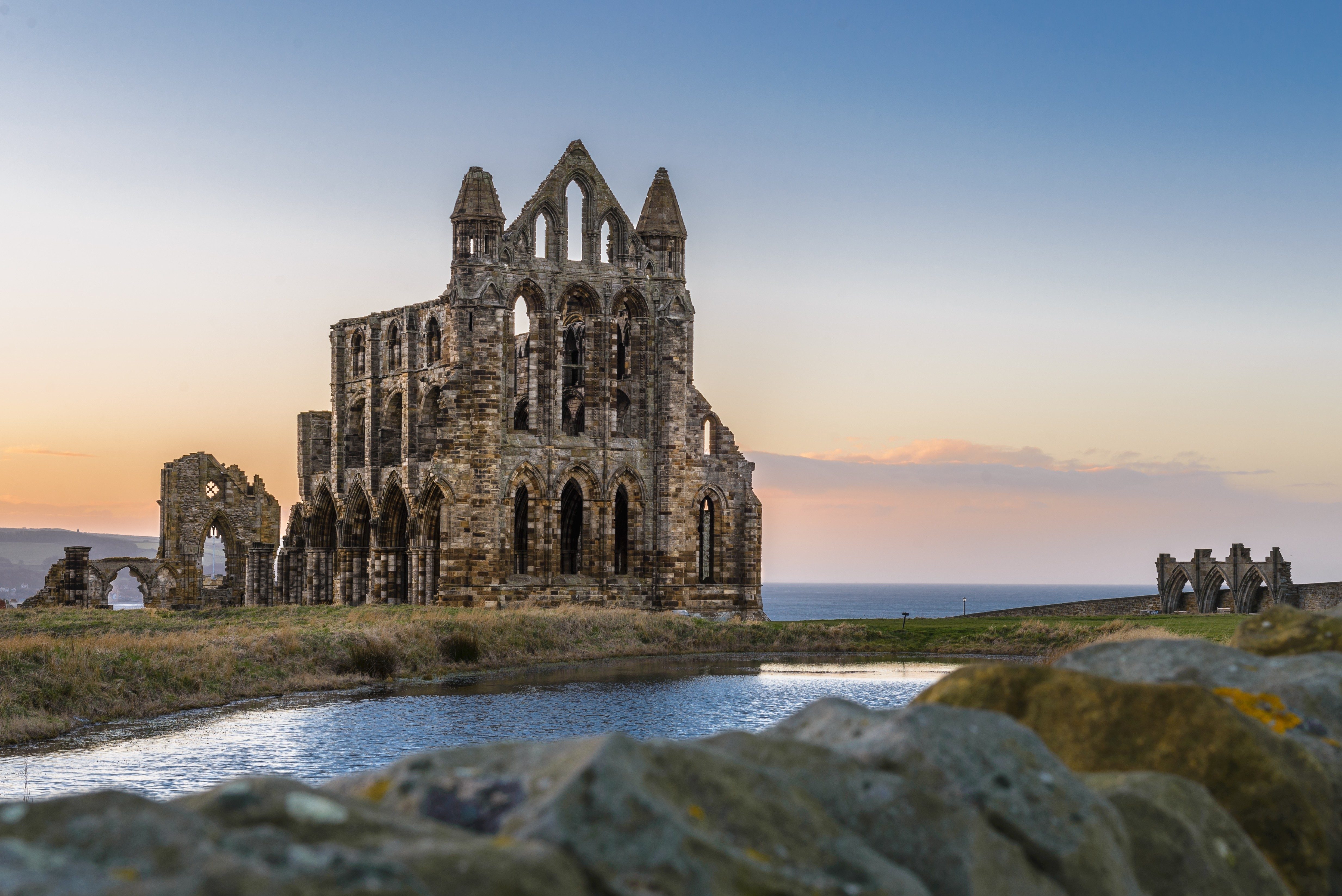 Crumbling castles and precarious palaces always seem to catch our attention. What is it about these royal ruins that captivate us? Perhaps it’s that they have a certain romantic, haunting charm, unlike these super eerie abandoned homes. Or perhaps it’s the allure of an untold story or the possibility of discovering a crown jewel among the rubble. We took a peek inside 14 amazing abandoned castles to find out. 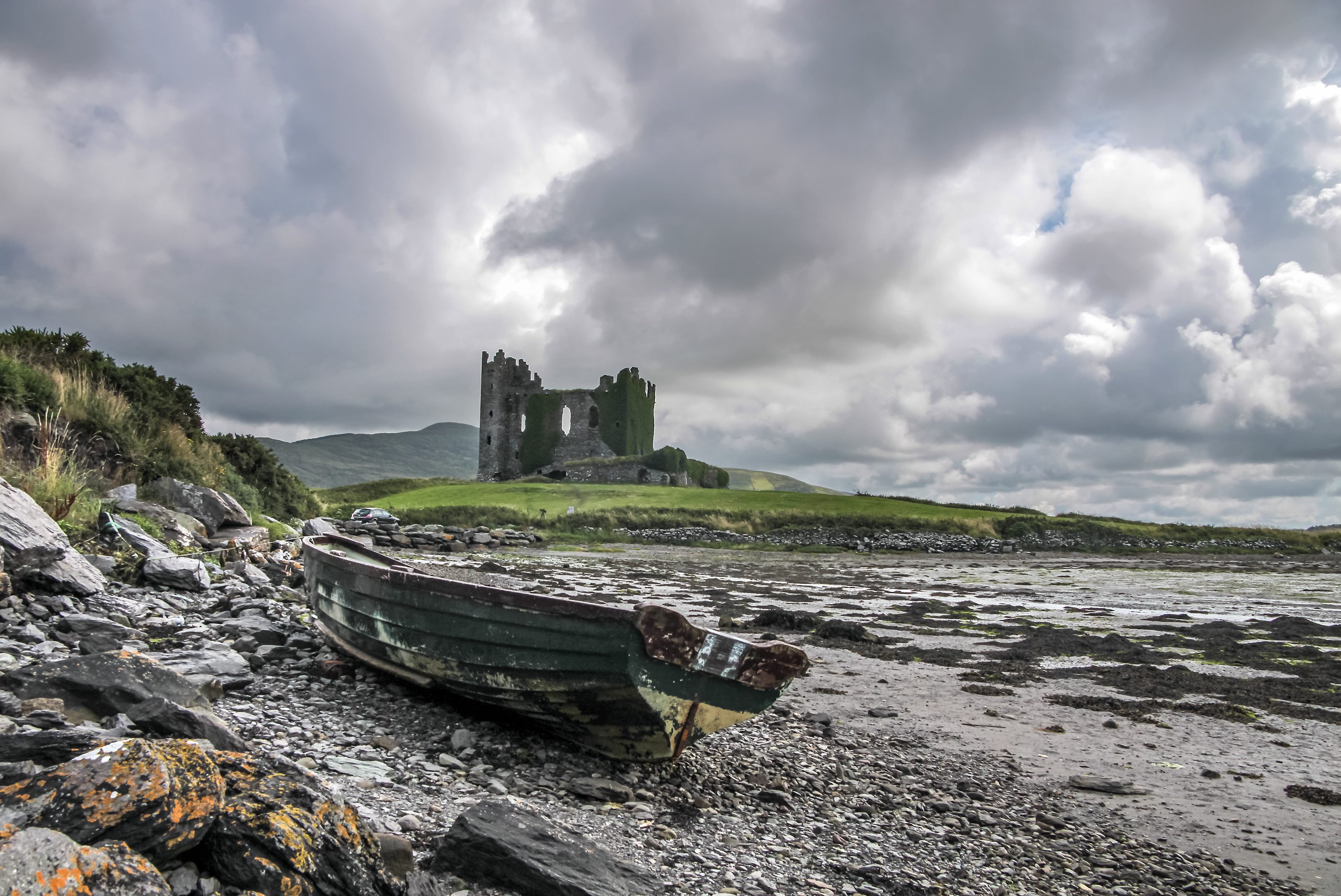 This ivy-clad castle near the water’s edge in County Kerry was built around the 16th century. The stone walls are the only things from it that have endured the sands of time. The edifice was severely damaged in the mid-1600s when Oliver Cromwell’s troops attacked it with cannon fire; local farmers subsequently took some stones for their own building projects. If you’ve always wanted to be treated like royalty, check out these 15 fairy-tale Irish castles you can actually stay in. 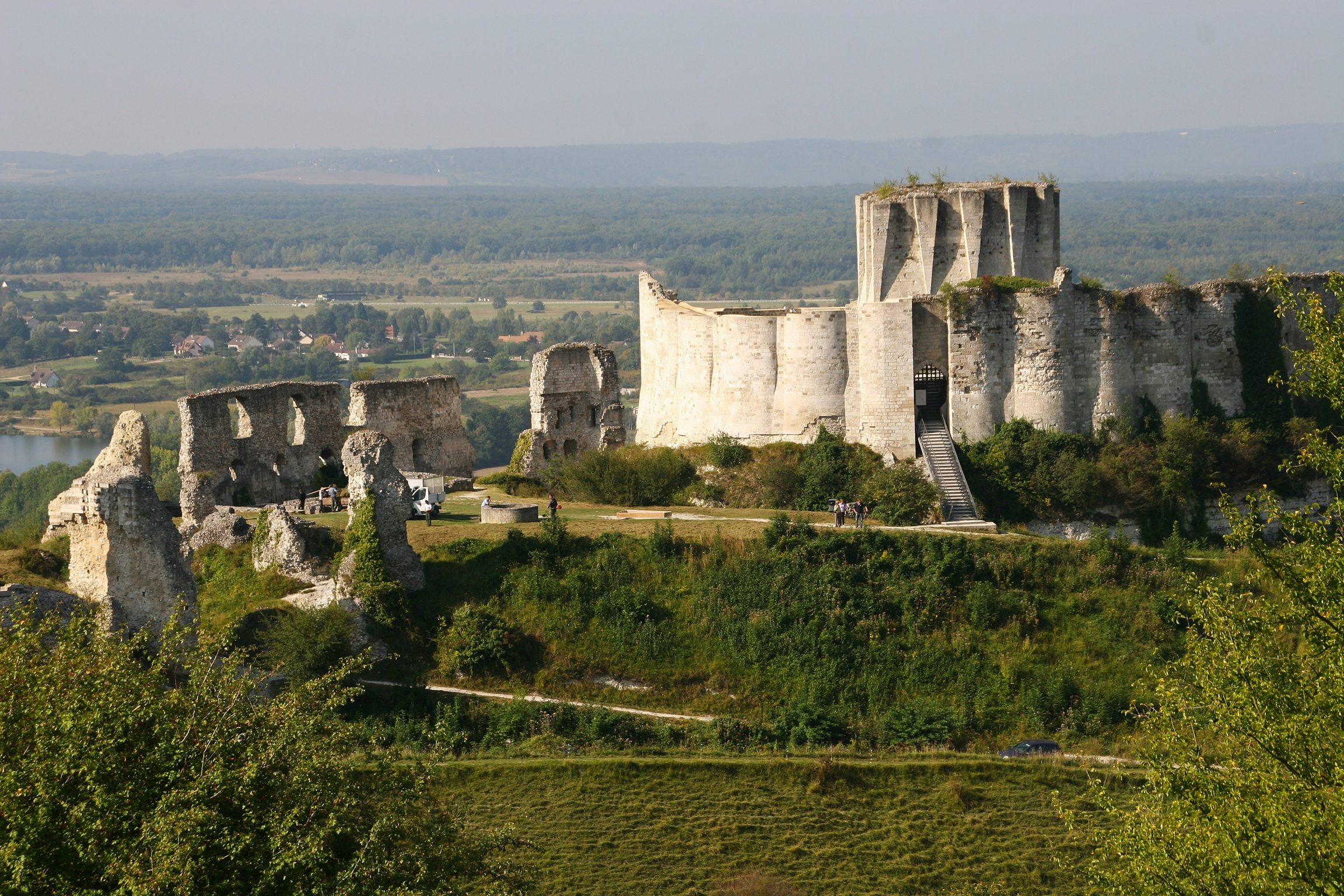 Gaillard Castle, or known in French as Château Gaillard, was a 12th-century castle on the Andelys cliff overlooking the Seine River in France. Built by Richard I of England, also known as Richard the Lionheart, the castle was eventually conquered by Philip II of France in 1204. Here are 50 jaw-dropping photos of the world’s most beautiful countries. 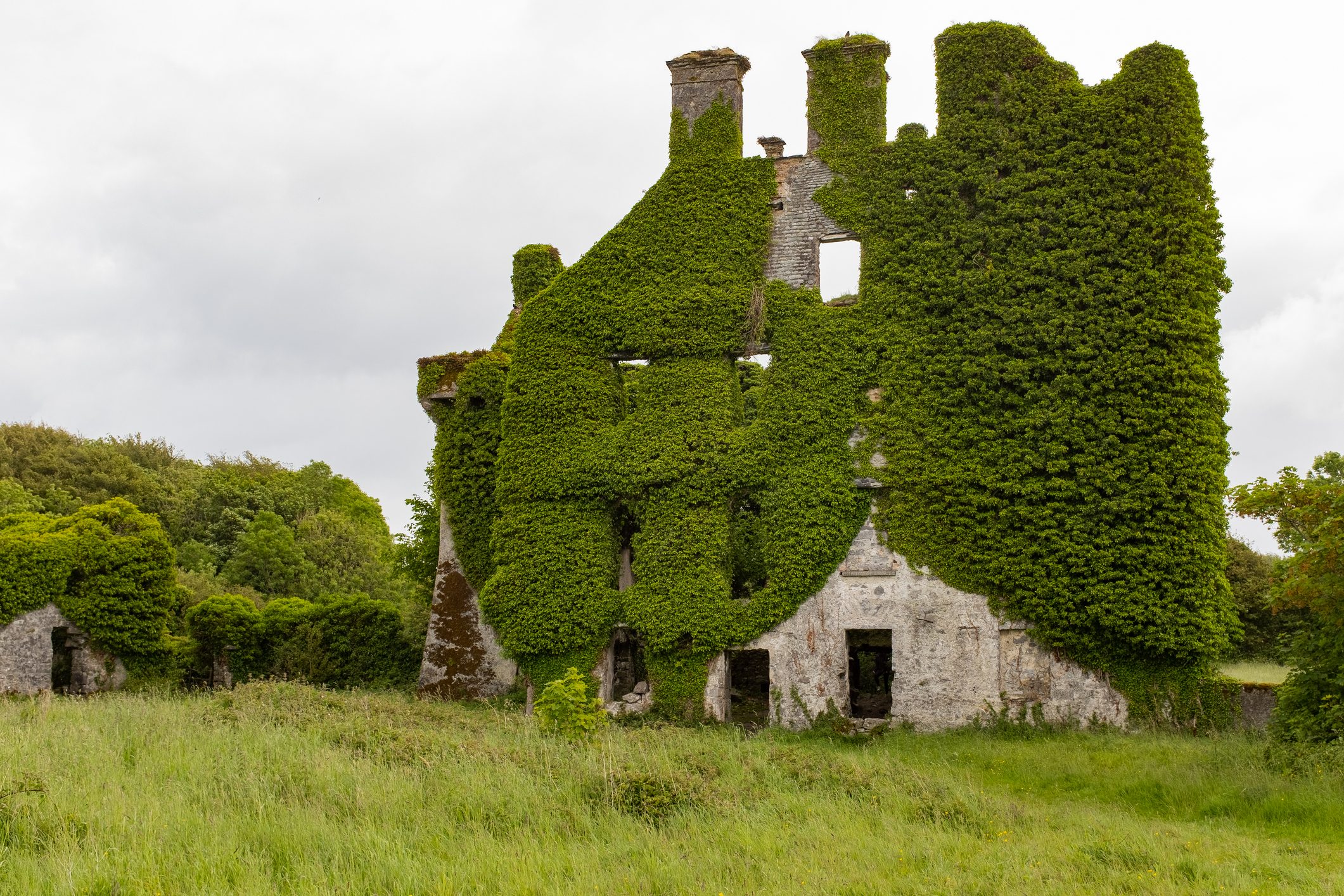 Located a short walk from Galway, Menlo Castle was built in the 16th century and home to English nobles from the Blake family. Unfortunately, a fire destroyed most of the castle in 1910 and the castle has been abandoned since then. The castle has transformed from a stone castle to a vibrant green, as it’s been covered by vines and is nearly indistinguishable from the greenery surrounding the castle. These are the 14 undiscovered gems of Ireland. 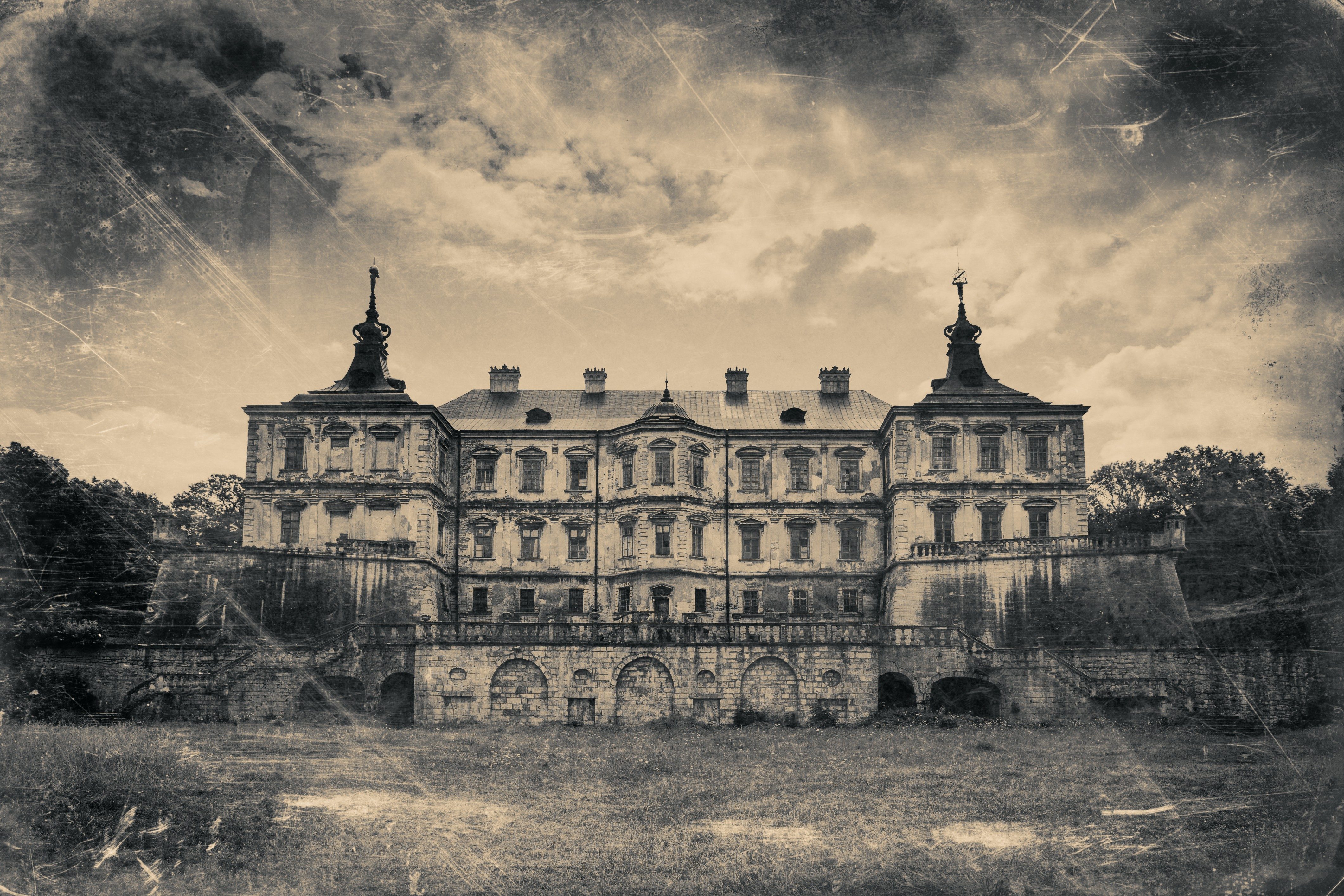 Once considered one of the finest castles in Europe, Pidhirsti Castle was built in the 17th century by the Polish-Lithuanian Commonwealth’s Crown Hetman Stanislaw Koniecpolski, according to Discover Ukraine. Part of the Golden Horseshoe tourist route, this impressive Renaissance-style stone castle located in western Ukraine was used in the filming of D’Artagnan and Three Musketeers in 1978. If you’re a cinema buff, you won’t want to miss these 65 movie and TV filming locations you can actually visit. 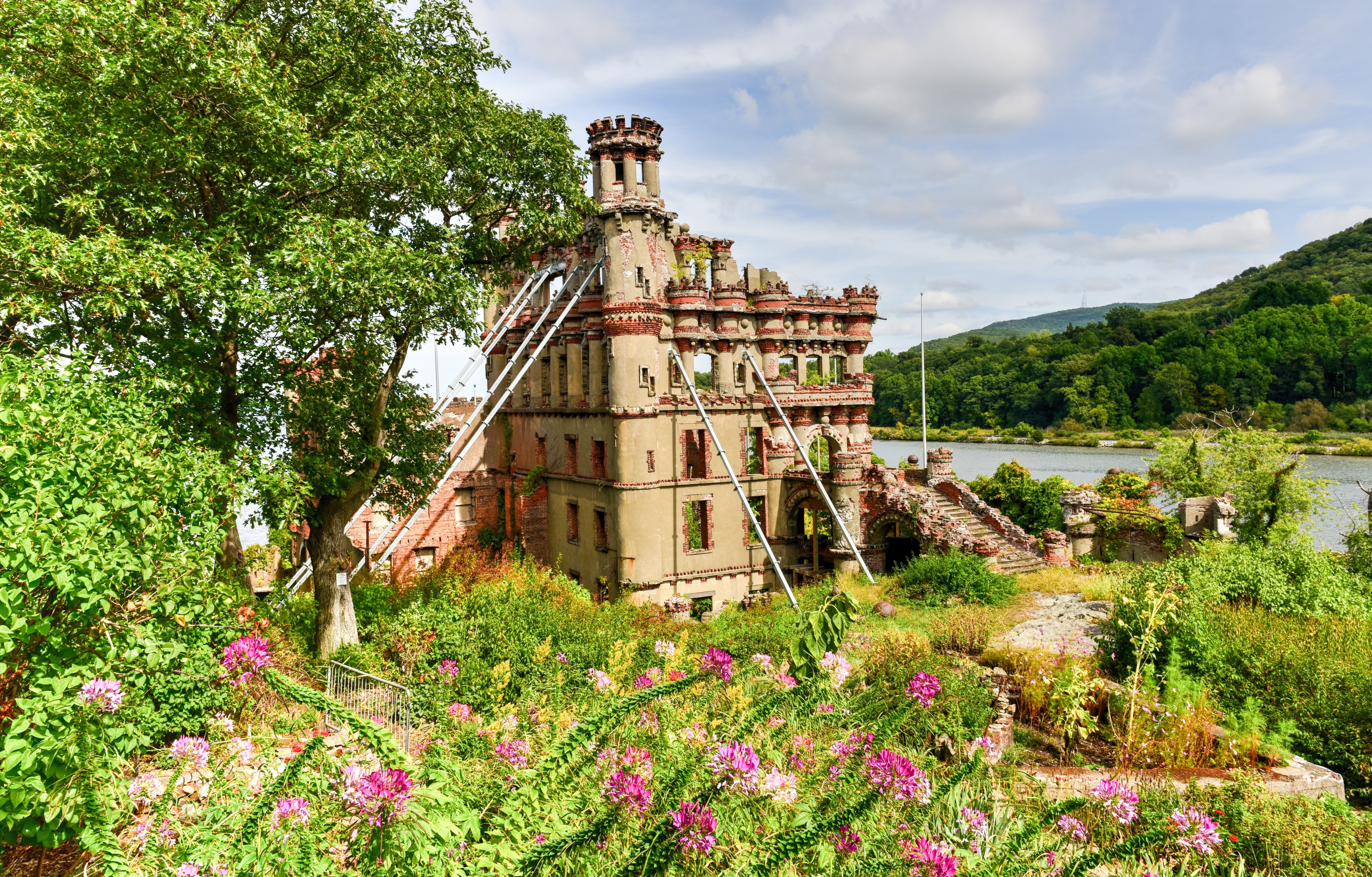 You don’t have to buy a plane ticket to Europe to find a Gothic-looking abandoned castle. To find one closer to home, head to New York. Just take a boat ride on the Hudson River, about 60 miles north of Manhattan, to visit Bannerman’s Castle on the island of the same name. The castle, a 19th-century artifact, was erected to house businessman Francis Bannerman’s military goods and was also used as his family’s summer residence. Thanks to the Bannerman Castle Trust, visitors can still visit the site and enjoy special events. While you’re in the Big Apple, check out these other abandoned places in New York City you can still visit. 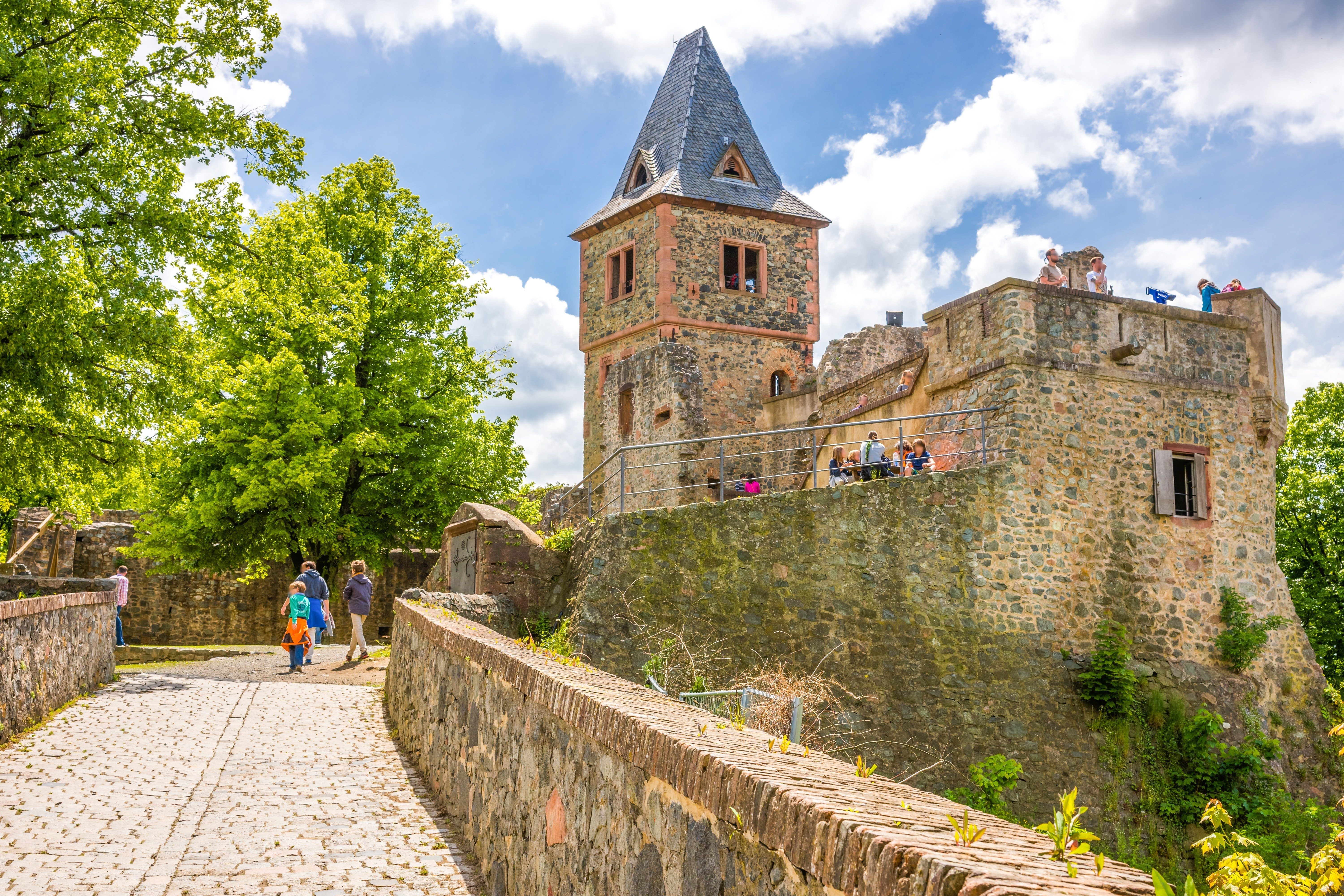 This 13th-century medieval castle was dubbed Frankenstein’s Castle long before Mary Shelley penned her Gothic tale. “Frank” actually refers to an ancient Germanic tribe and “Stein” means stone, and many edifices in Germany actually bear the name Frankenstein. That said, this particular castle is the one most associated with the famous book. In fact, since the 17th century, Frankenstein’s Castle in southern Hesse has been the inspiration of many legends, according to National Geographic. Be sure to brush up on the story of physician and alchemist Johann Konrad Dippel, who was born in the castle and invented an animal oil he claimed transferred souls between dead bodies. Like supernatural spots? Check out these 15 spookiest travel destinations around the world. 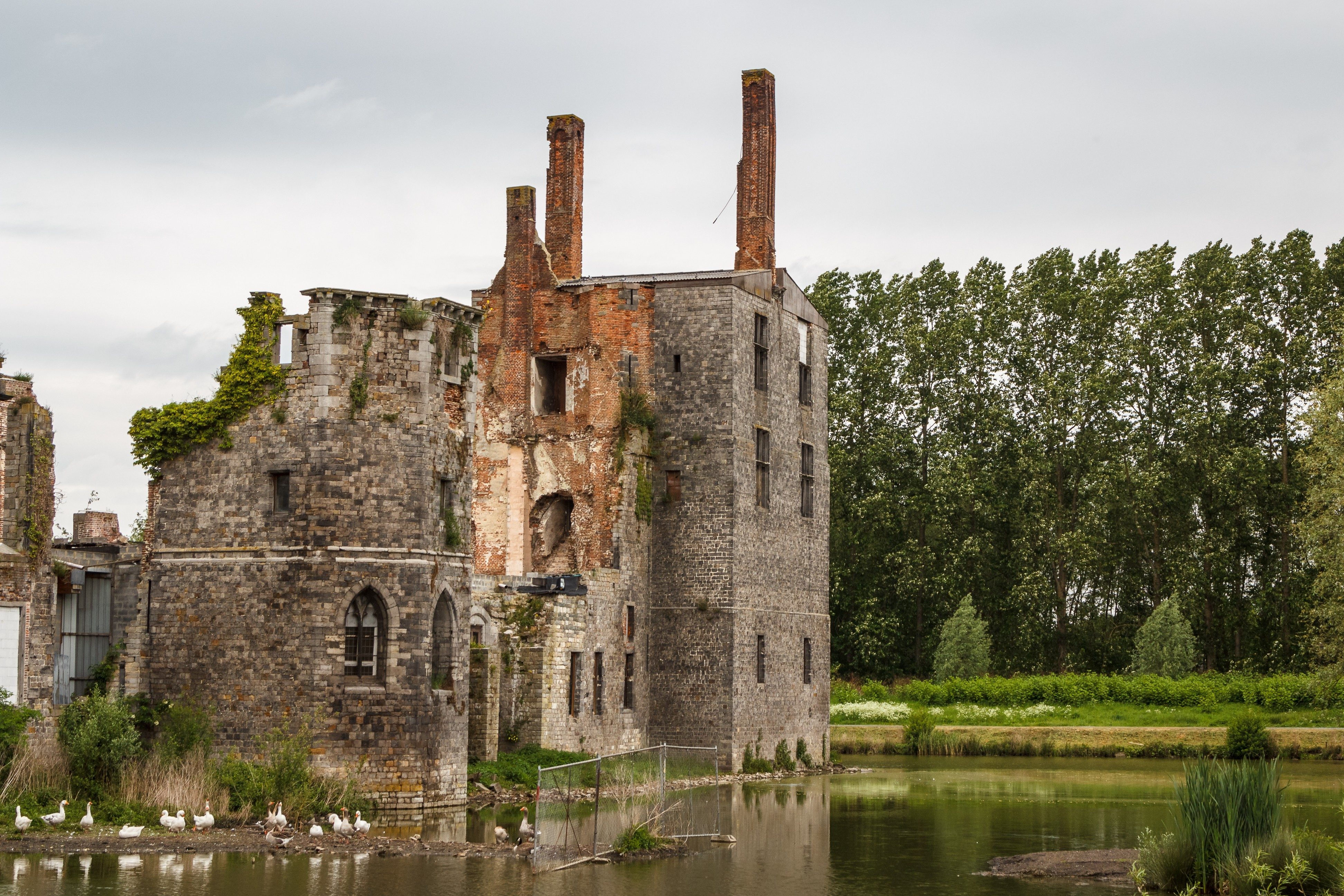 Havré Castle was constructed on the remains of a 12th-century feudal fortress. Throughout its storied history, it belonged to a number of esteemed families and welcomed a bevy of luminaries, including painter Peter Paul Rubens, Van Dyck, Marie of Hungary, Marie de Medici, Prince Eugène of Savoy, and the Duke of Marlborough. Over the years, the castle was sold, bought, and ultimately abandoned. In 1979, a group of concerned citizens formed a non-profit organization to restore the site. Not all abandoned sites are beautiful. In fact, these 13 attractions are so creepy, they’re off-limits to tourists. 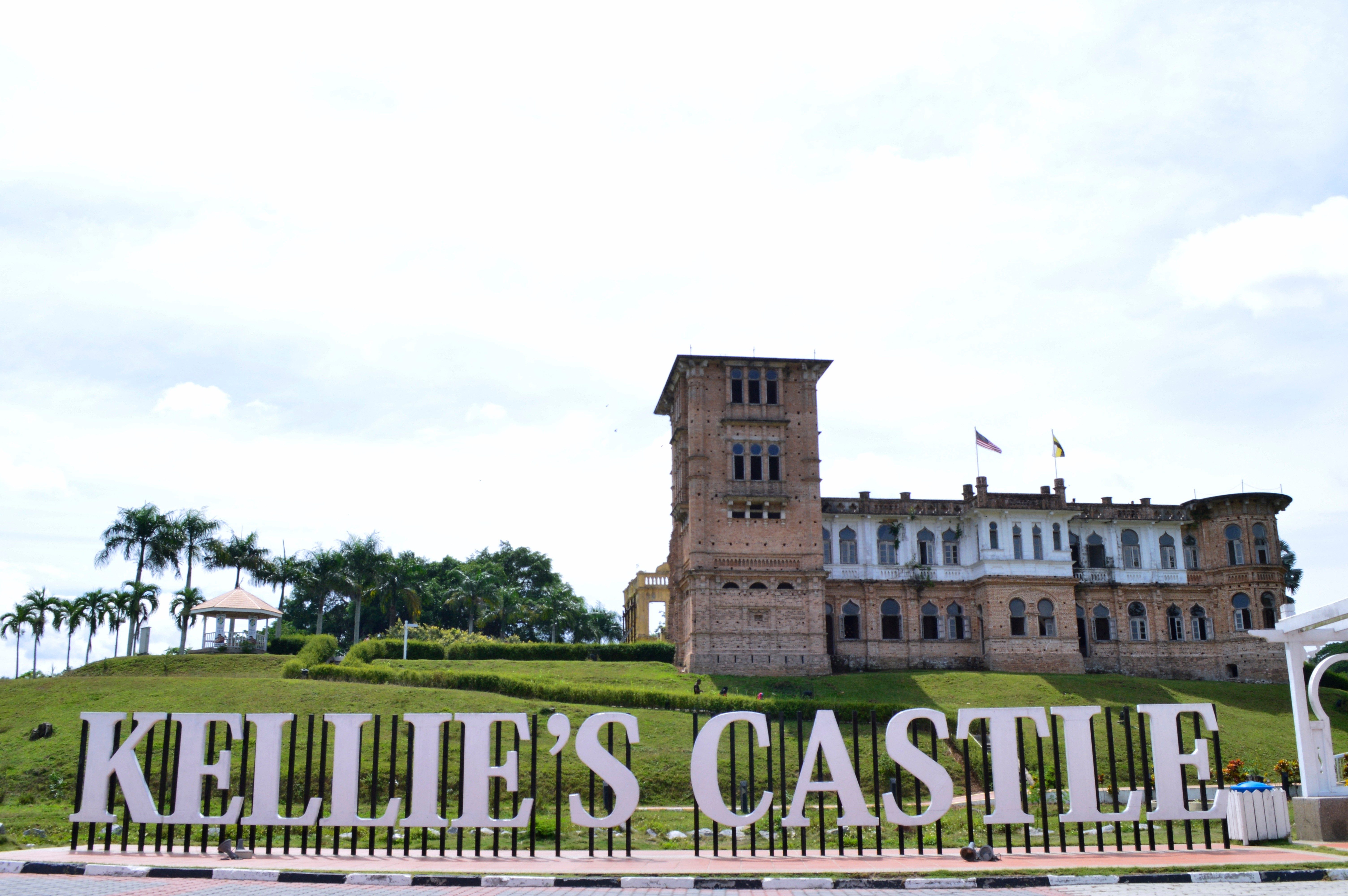 The unfinished castle of William Kellie Smith, a Scottish rubber plantation owner, is one of Malaysia’s most interesting structures. Smith had a grand vision for this castle, which he built for his family. The plans included a six-story tower, an indoor tennis court, a rooftop entertainment center, and a wine cellar. Ironically, it would have featured Malaysia’s first elevator, but en route to purchase the elevator, Smith died of pneumonia. His sudden death ultimately prompted his forlorn wife to sell the property, which was later abandoned. Places that have been abandoned often have fascinating histories, like these 13 abandoned amusement parks that will give you the creeps. 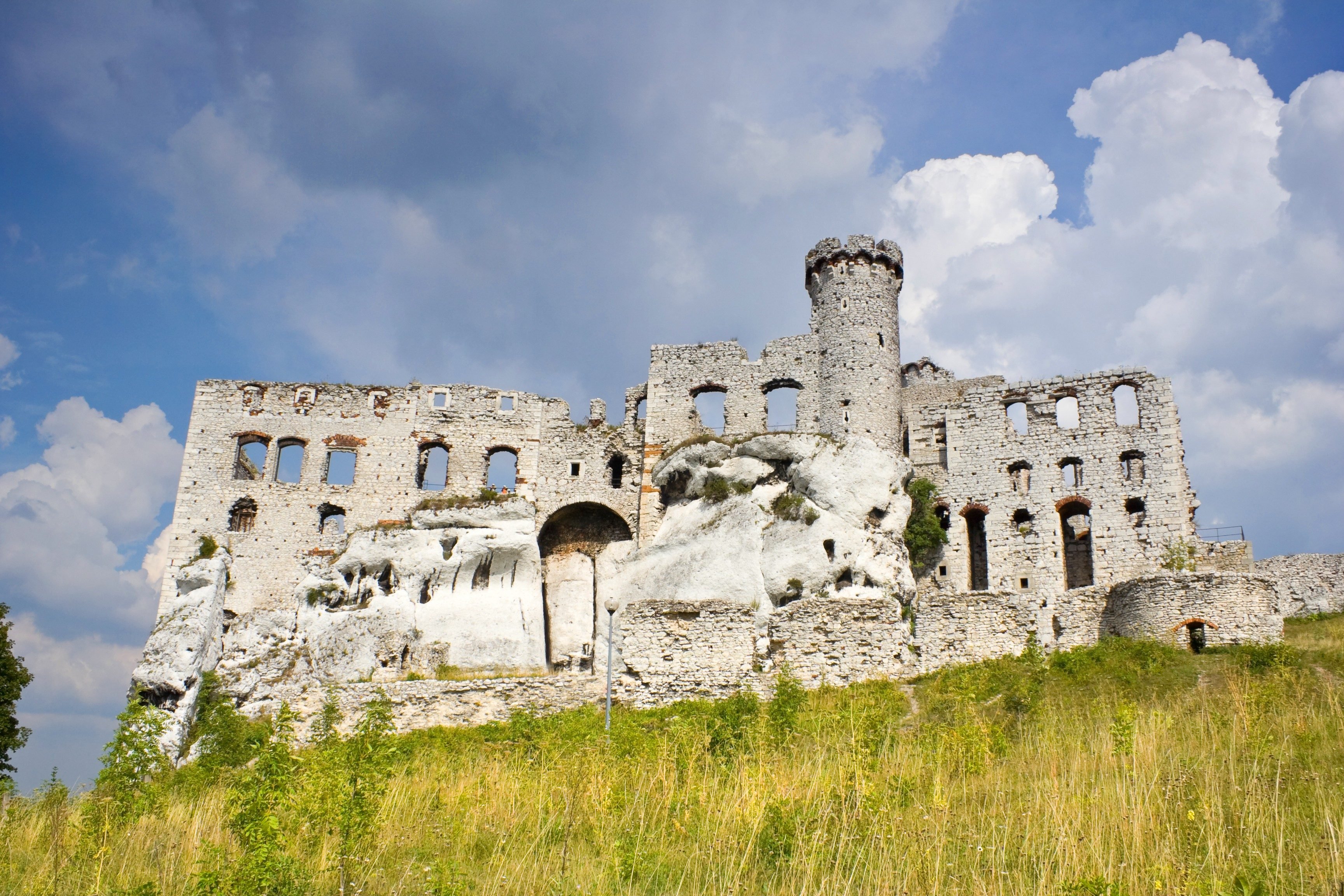 Since the 14th century, Ogrodzieniec Castle has been celebrated as an iconic medieval structure that defended the Polish Crown. During the Polish-Swedish war, the castle endured a devastating fire, and its residential section suffered irreparable damage. But it remains a beloved, enchanting site. The castle’s magical setting on a hill in Poland’s Jura Chain has inspired painters and filmmakers, and it has attracted a growing number of visitors, according to Poland’s tourism website. If it looks familiar, it may be because the castle has made cameos in a local Polish TV series, Roman Polanski’s The Revenge, and an Iron Maiden video. Here are 14 other historic places that are now abandoned. 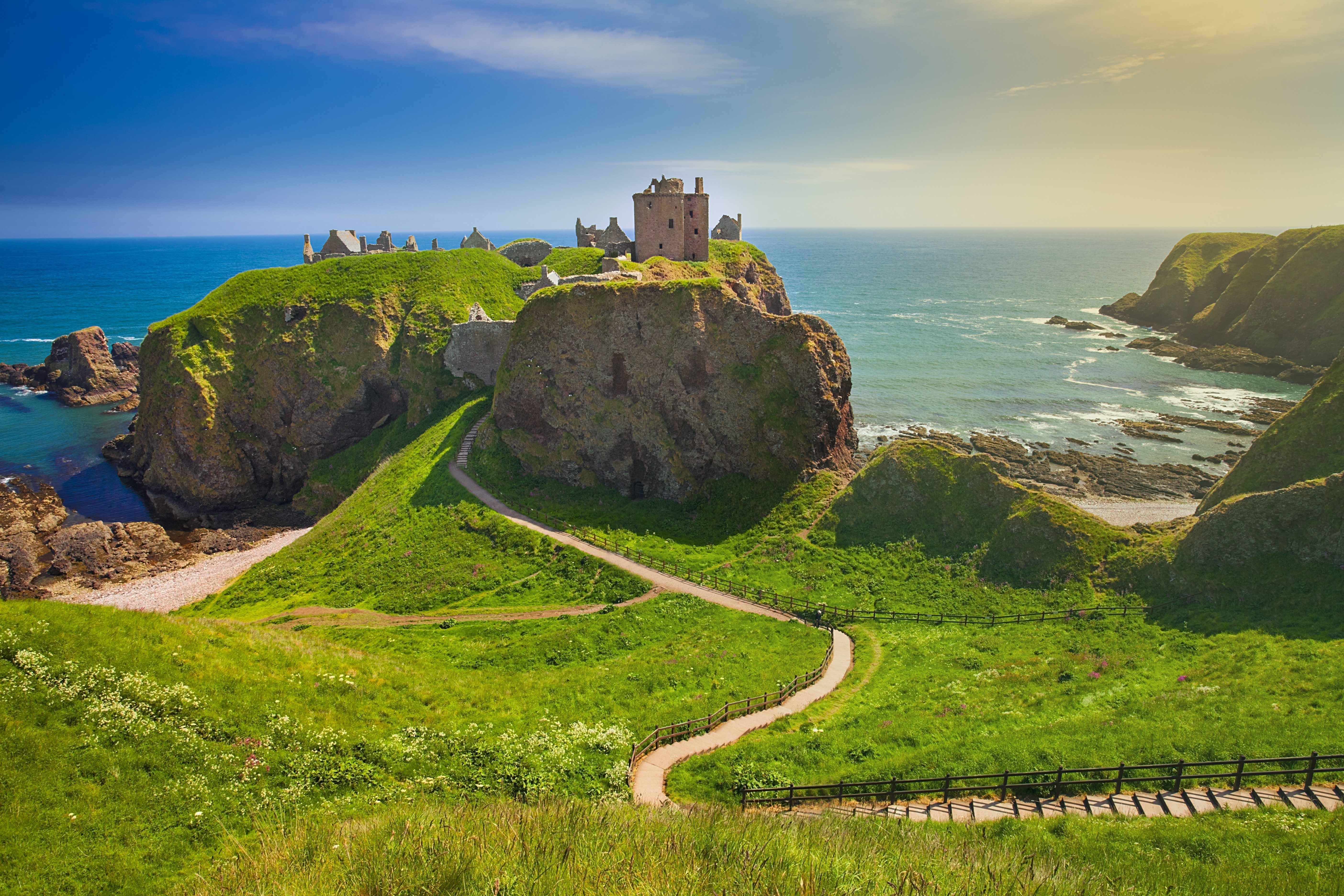 It is believed that this romantic cliff-top ruin in Scotland was built in Pictish times between 5000 BC and 700 AD. Of course, it had many residents over the years, including the 4th Earl Marischal in the 1500s, a guardian of Mary, Queen of Scots, who was thought to be the wealthiest man in Scotland at the time. After many dramatic centuries’ worth of battles and betrayals, the castle was confiscated by the government in the 18th century. It was abandoned and left in ruins until 1925 when an English viscountess undertook its restoration. While it is privately owned, it is now open to the public to enjoy. Here are 17 more jaw-dropping photos of Scotland. 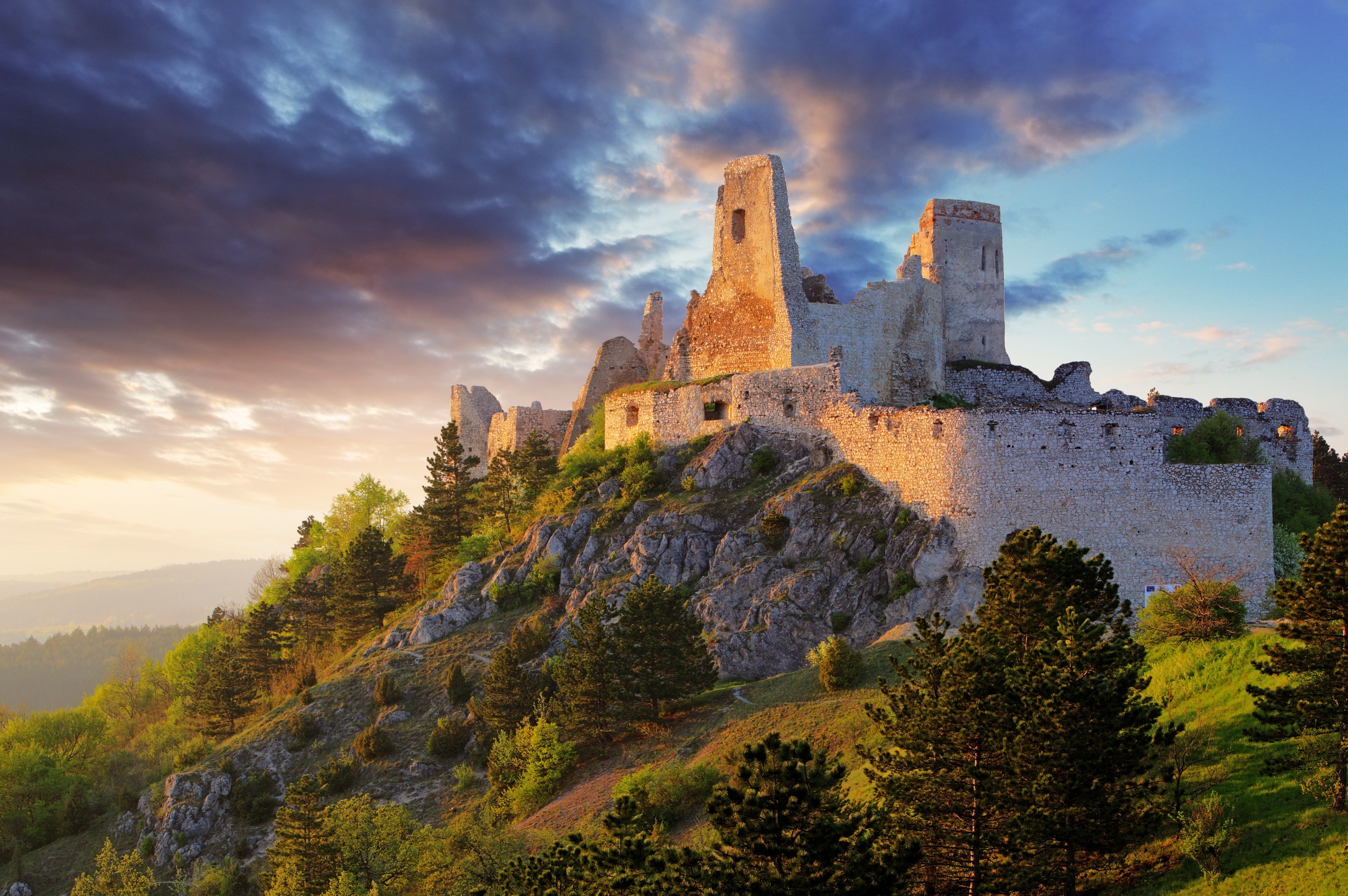 Castle of Čachtice, built in Slovakia in the 13th century, was the home of Elizabeth Báthory, who was dubbed the “bloody countess.” Accused of torturing and killing more than 600 young girls—and, according to legend, bathing in their blood in an effort to stay young and beautiful forever—Báthory was sentenced to life in prison. Today, despite its dark history, this site is a lot less macabre. While you obviously can’t stay in this castle, you can rent these 10 gorgeous castles on Airbnb. 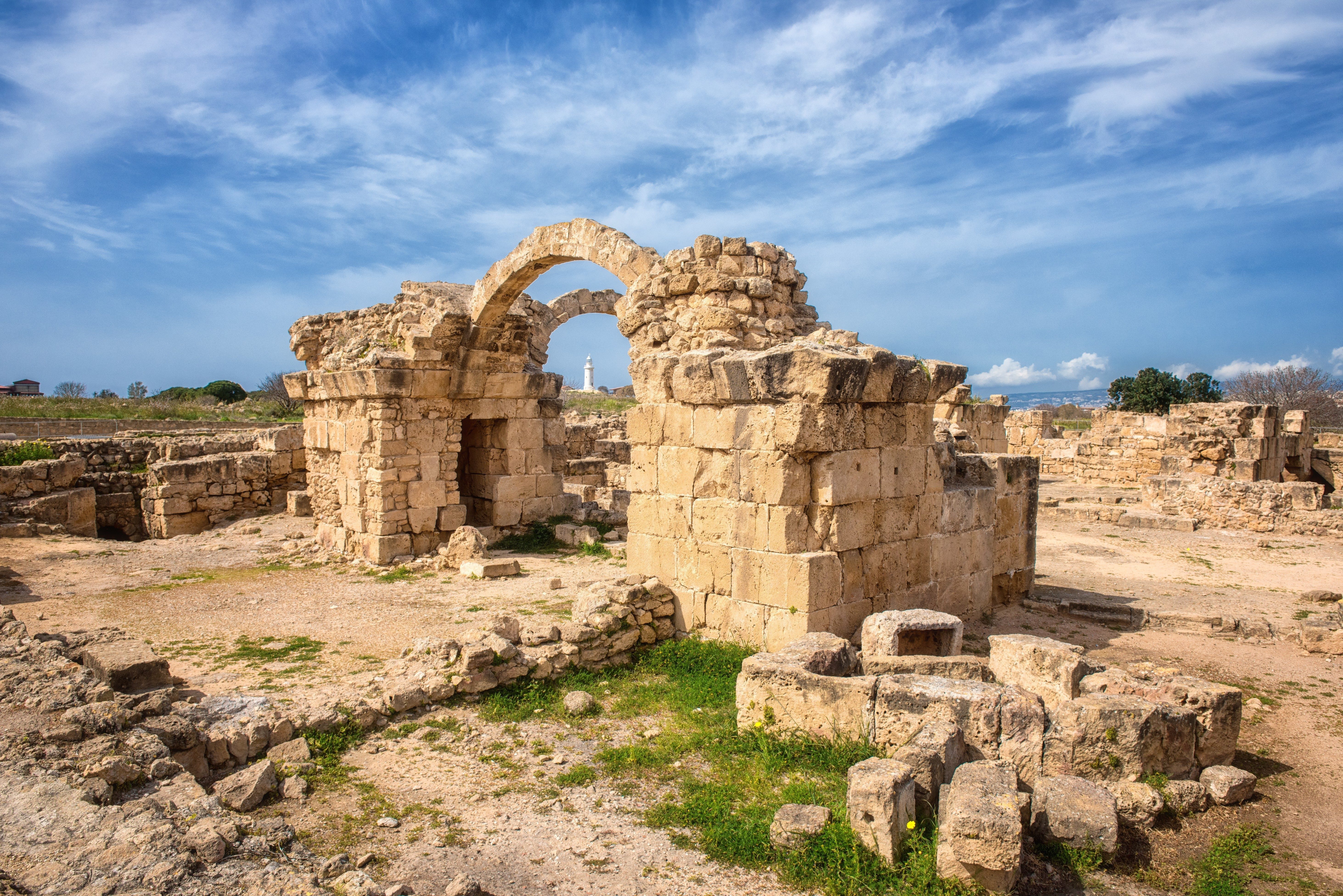 Saranta Kolones translated into English means 40 columns. The original Byzantine castle was built on 40 granite columns, according to the travel website of Cyprus, and it is thought to have been built in the 7th century. In 1223, it was destroyed by an earthquake and later abandoned. Cyprus is actually home to one of the world’s most amazing and underrated travel destinations. 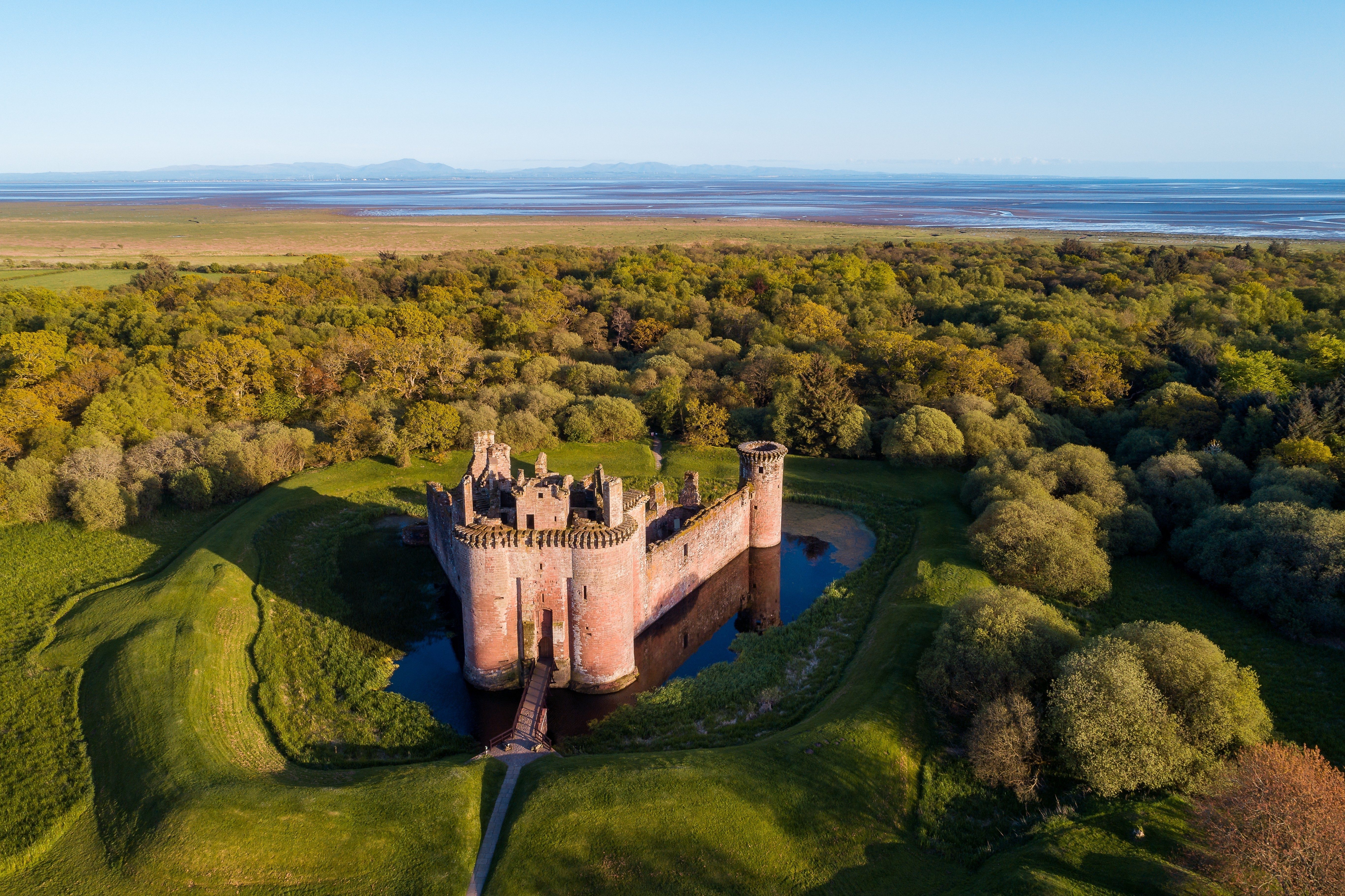 A visit to Caerlaverock Castle will reveal a medieval fortress complete with a moat, battlement, and twin-towered gatehouse. Visitors can enjoy an informative exhibition on siege warfare, and in the summer and on weekends in the winter, you can visit the castle’s tearoom for a treat. If you’re castle-obsessed, you won’t want to miss these 13 amazing castles from Game of Thrones. 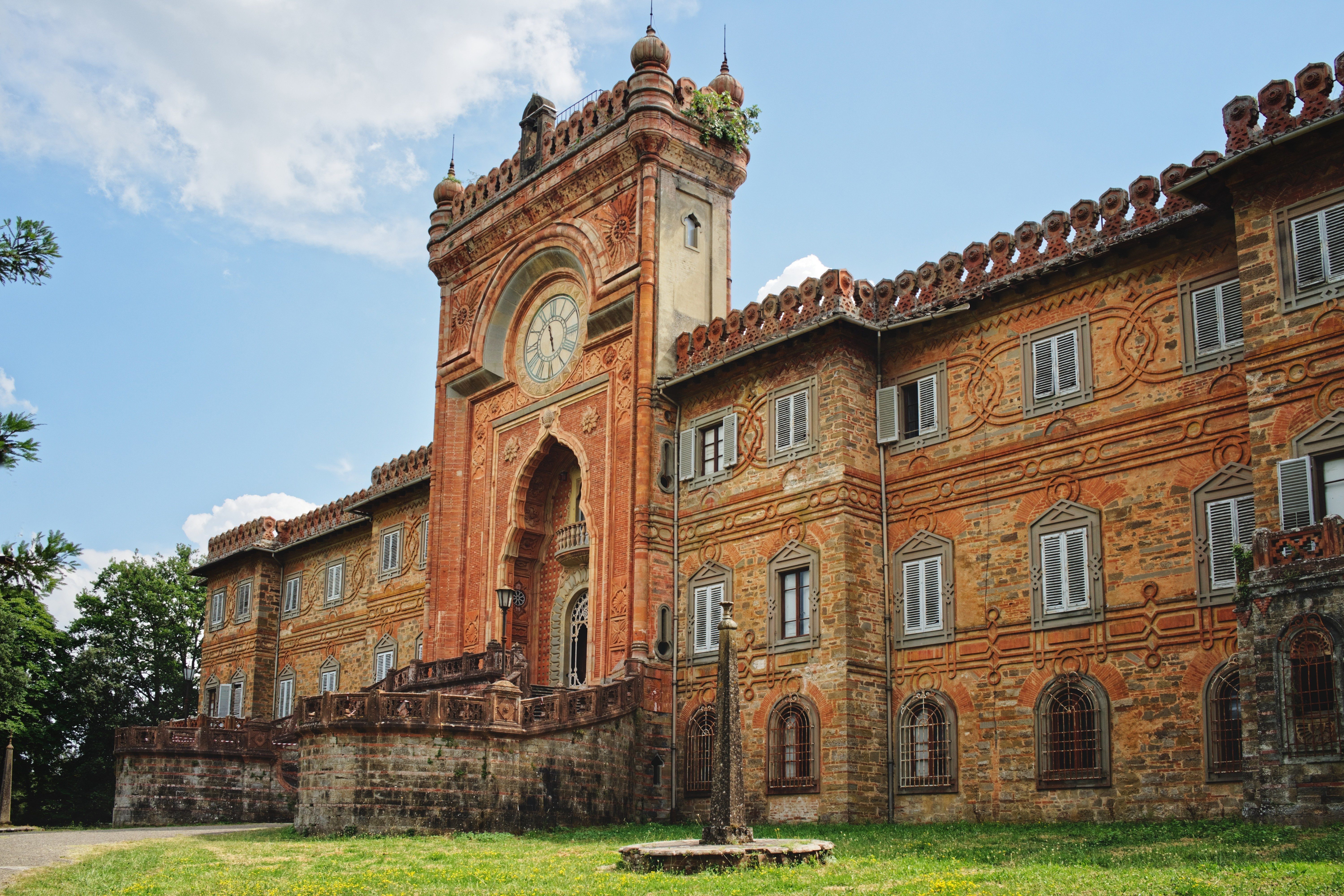 Built in 1605, the Sammezzano Castle is a Moorish-style structure that sits on top of a hill near Florence. To say that this castle is ornate and elaborate is an understatement. It has a whopping 365 unique rooms, one for each day of the calendar year. (Yes, you read that right.) They include the Peacock Room, which boasts a rainbow of colors and geometries, and a White Room, resplendent with Moroccan mosaic-tiled floors. After World War II, this castle was turned into a luxury hotel until it closed in the 1990s. While Sammezzano Castle is still spectacular, the same can’t be said for these 10 abandoned hotels that will give you the chills.