Trust us: You don't want to get on the TSA's bad side. 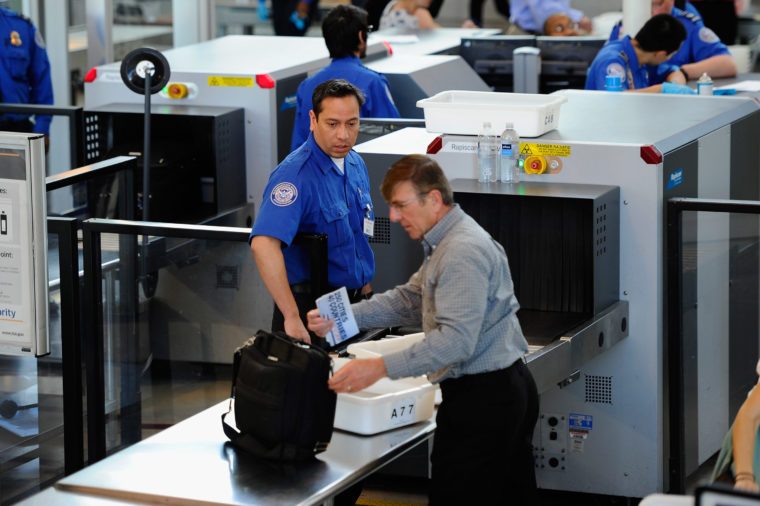 Oops, you did it again (and so did everyone else)

It’s tough to be a TSA agent. In fact, one out of every five TSA screeners quits within six months, according to a new report by the Homeland Security Department’s inspector general. In addition to the relatively low pay—the starting salary is $35,000—TSA agents have to tell people to remove their shoes about a million times a day, and the level of respect they receive appears to be awfully low. So, let’s try to make their lives a little easier, shall we? All you have to do is avoid these mistakes that annoy them. In the process, you’ll also likely have a much smoother and faster trip through security. 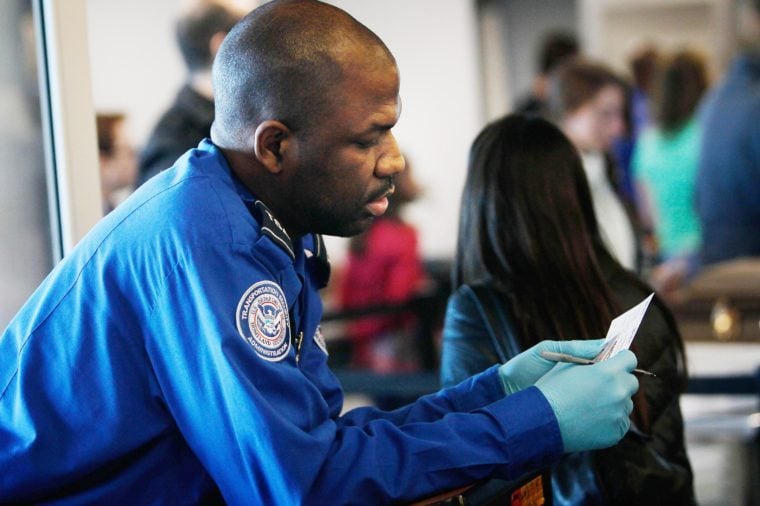 You’re running late, so you blame the TSA

OK, we may have done this once or twice ourselves. You have a flight to catch, and you’re running late. Then you hit the TSA line, and it’s a doozy, so perhaps you’re a little rude to the TSA officers. Can they go faster? Why is this line so loooooong? OMG, this is taking forever. “This is a main pet peeve,” says Devin Smith, a maintenance electrician at the Calgary airport who hears his TSA agent friends complain about it all the time. If you really think you’re going to miss your flight, you can politely ask to jump ahead of the line, but you’re not guaranteed anything, especially if you don’t arrive two hours before your domestic flight or four hours before your international flight. And if you’re really rude, chances are that the TSA agents will take their time with you. 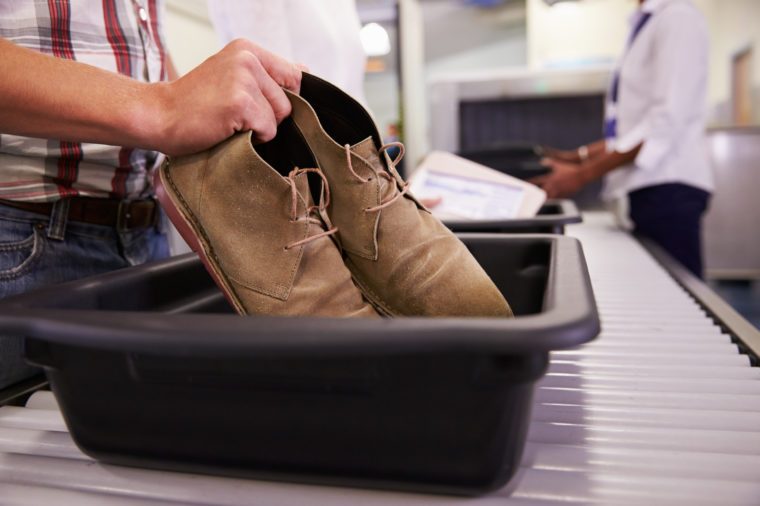 Making a fuss about taking off your shoes

No one likes to take off their shoes. It’s annoying, you don’t want your socks or bare feet to touch that gross airport floor, and it slows you down when you’re racing for your flight. But making a fuss out of it will just annoy TSA agents, Smith says. They didn’t create this rule: It was put into place after 9/11 because terrorists can put bombs into their shoes, so extra security is needed. The good news? We may not have to take off our shoes much longer. Here’s what airport security could look like in 10 years. 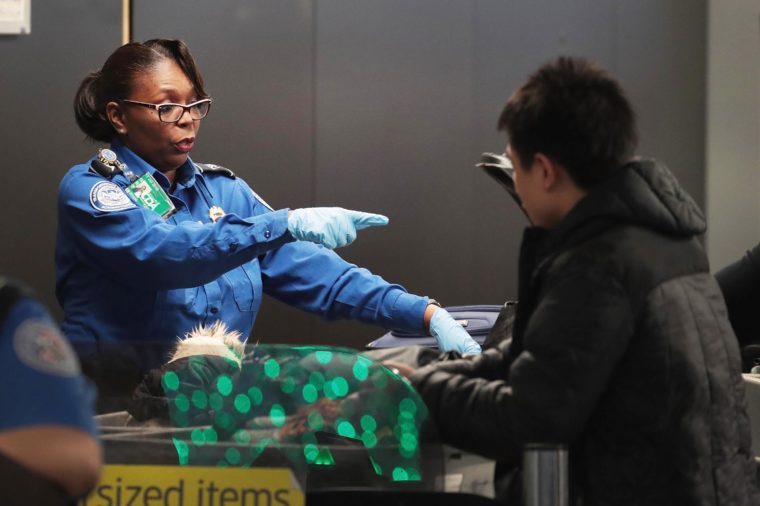 Going through the TSA line isn’t fun for anyone. Don’t take it out on the airport employees, who are simply trying to do their jobs, says Richard, a former TSA agent who asked that his last name not be revealed. He tells Reader’s Digest that he’s been yelled at, argued with, and harassed simply for following the rules and trying to get everyone safely through security. “It’s stressful for everyone, but yelling isn’t a good idea,” he adds.

Plus, let’s get real here: Arguing with TSA agents isn’t going to help anything—it’s only going to aggravate them and keep you on that line longer. “When we’re frustrated, we have the power to really take our time when moving that line along,” Richard says. In fact, it could move so slowly that you ultimately miss your flight. And you still wouldn’t have won your argument. Here are a few other things you should never do at the airport. 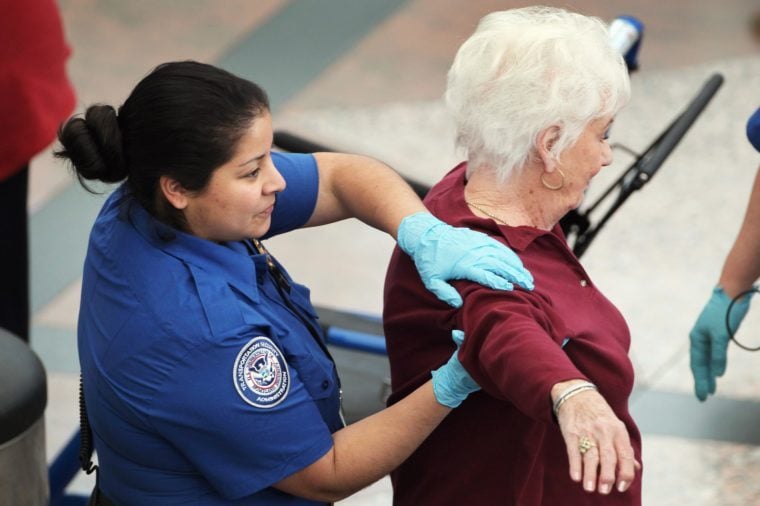 Joking about the pat-down

Getting a pat-down is uncomfortable for everyone involved. Most likely, you don’t want to be standing there, getting touched in odd places by a stranger during the stressful period before a flight. And guess what: The TSA agents don’t want to be touching you, either, but it’s their job. When you make a joke out of it, or say that you’re enjoying being patted down, this can be deemed as sexual harassment, according to Newsweek. The agents have all undergone formal training on how to do this proficiently, and they’re doing their best not to make this uncomfortable—for you or for them. So, they’d really like you to keep the jokes to yourself. You should also know what a TSA agent first notices about you. 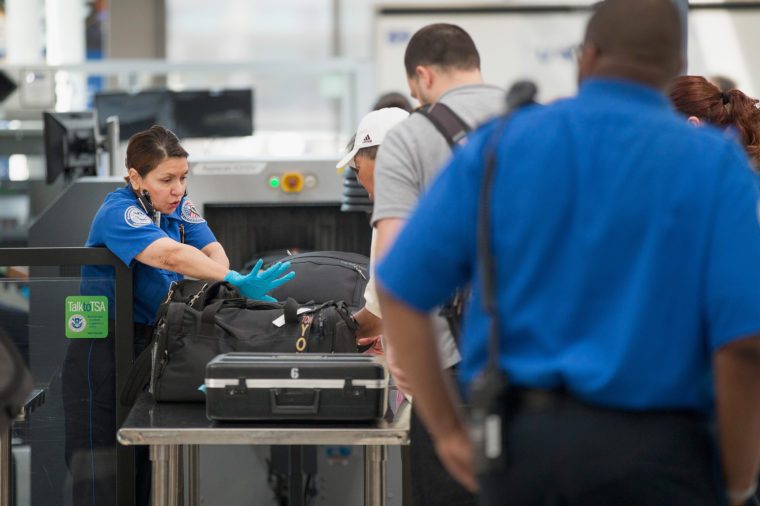 Not following the rules

The TSA repeats them over and over again. Not listening? There are signs throughout the security area. So clearly, it’s a little upsetting when people don’t remove their laptops or electronics from their carry-on bags when it’s mentioned and requested multiple times, Smith says. The end result is that your bags will have to go through the scanner additional times, which slows down the line, leading more people to yell at the TSA…and none of this makes those agents happy. While we’re on the subject, these are the new air travel rules you need to know about. 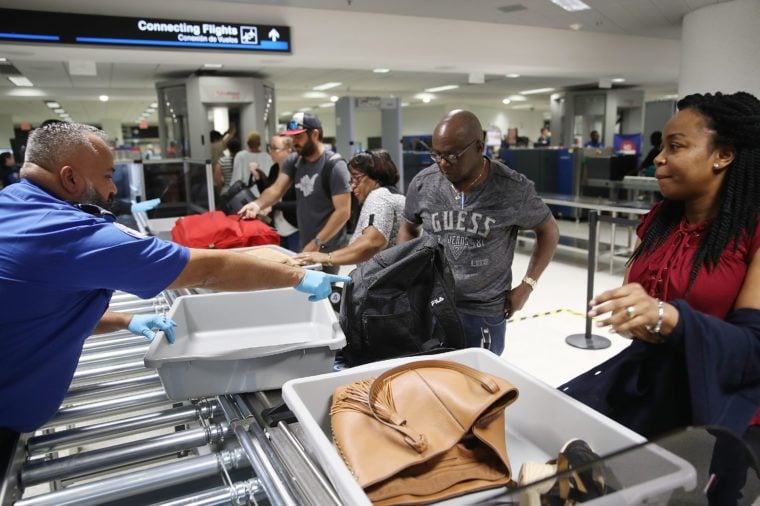 Waiting until the last minute to do what’s needed

On par with not removing these items at all? Taking your sweet time to do it. The TSA line is slow-moving. That means you have plenty of time to get those electronics out of your bag, take off your shoes, and remove your snacks (they have to go through security on their own, too). Why do some people wait until the very last moment to start unpacking and removing their shoes? Who knows—but cut it out. Not only does this slow down the process, but it’s more likely that you’ll forget to do one of the tasks and have to go through the scanner twice, according to Insider. By the way, these are 9 foods you can bring through security—and 4 you can’t. 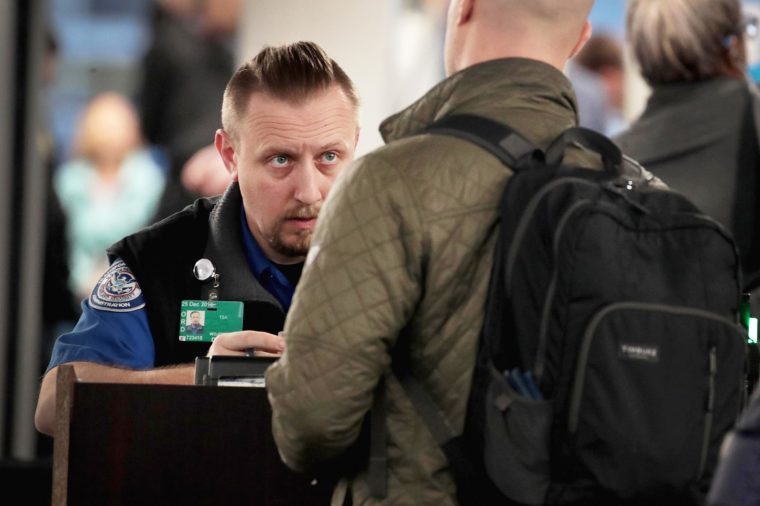 You may think it’s funny to joke about bombs or terrorism to the TSA agents or other passengers while you’re in line to go through security, but this is no joke, according to CheatSheet. They are required to take everything you say seriously. Translation: If you jokingly say, “I have a bomb in my bag,” you will be restrained and you will miss your flight. End of story. It will take time out of everyone’s day for no reason. 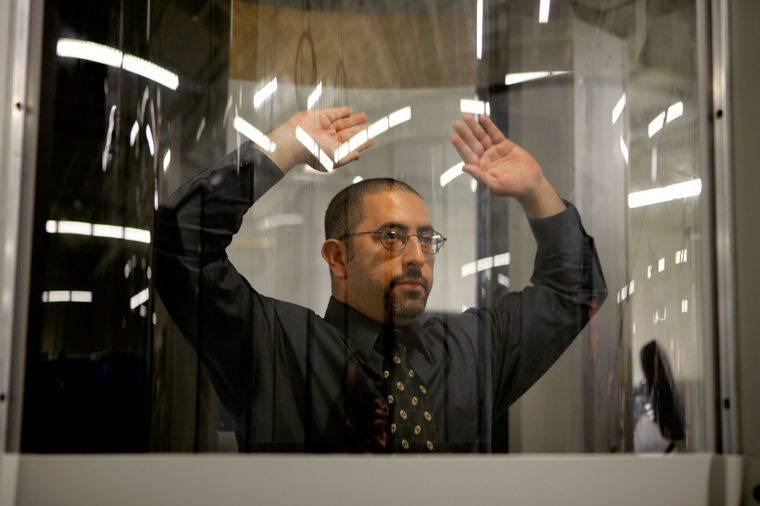 No, the scanner doesn’t cause cancer. Yes, they’re positive it won’t do any harm. Nope, not even the full-body millimeter-wave scanner, where you hold your hands above your head. So, please don’t ask the TSA if it’ll do any damage to you. If you’re really super nervous, you can opt for a manual pat-down, according to The Points Guy. Just remember not to joke about this manual pat-down. In case you were wondering, this is what airport body scanners really see. 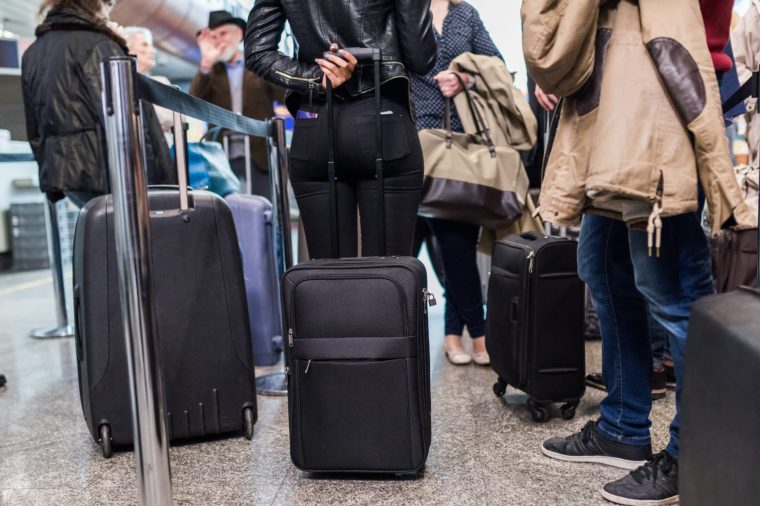 No one likes waiting in line, but it’s just something you’re going to have to do. And don’t even think about going into the Pre-Check line if you haven’t signed up for Pre-Check. It’s not nice to the people who paid for Pre-Check or signed up for the Pre-Check credit cards. Plus, the last thing that TSA agents want to be bothered with are the line skippers, according to Oyster. This isn’t part of their job description, and quite frankly, they have more important ways to spend their hours at the airport—you know, like finding bad things and catching bad guys. If you really want the line to go faster, apply for a TSA Pre-Check. 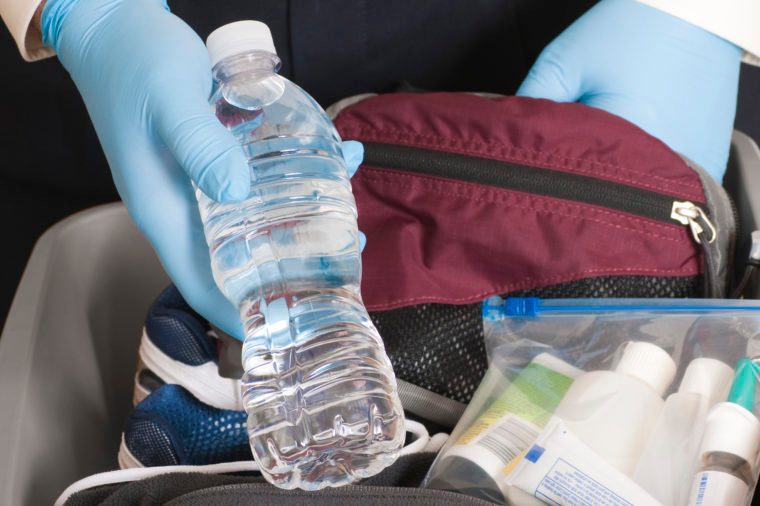 Being sneaky with your liquids

The rule is 3.4 ounces or 100 milliliters max per liquid. There are also rules about what constitutes a liquid. (I found out recently during a trip that slime is, indeed, a liquid in the TSA’s eyes, for example.) The agents didn’t make up these rules, but they must enforce them, and you must abide by them. If you try sneaking a larger liquid into your bag or if you “forget” to remove your water bottle, they will find it, confiscate it, and have to run your bag through the scanner again. We’re sure you can understand that doing this over and over again, thanks to passengers who want to make their own rules, can be very annoying. Aside from liquids, here are the things that are getting your luggage flagged by the TSA. 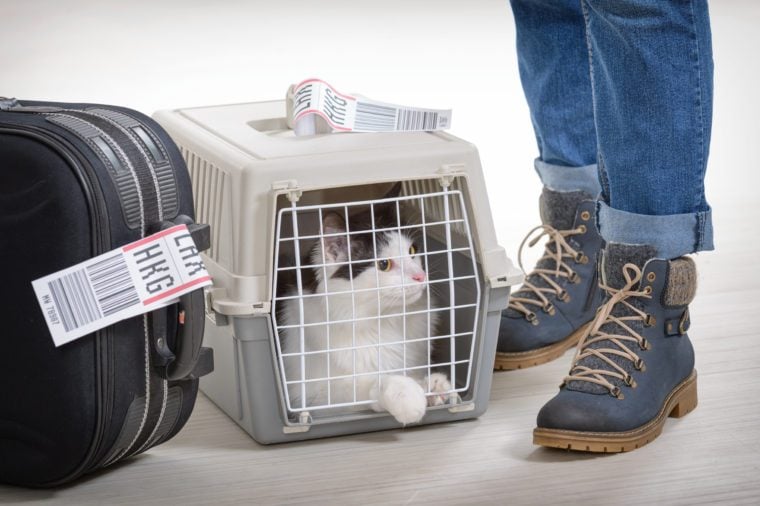 While your cat may be lovely and legally able to fly, it’s not fun for TSA agents to deal with cats, according to the Travel. They hiss, they scratch, they escape, and they are simply scary for strangers to have to deal with in security. Sure, they may be your calming emotional support animal, but they usually have the opposite effect on TSA workers. Here are other things most likely to get you noticed by the TSA—and not in a good way. 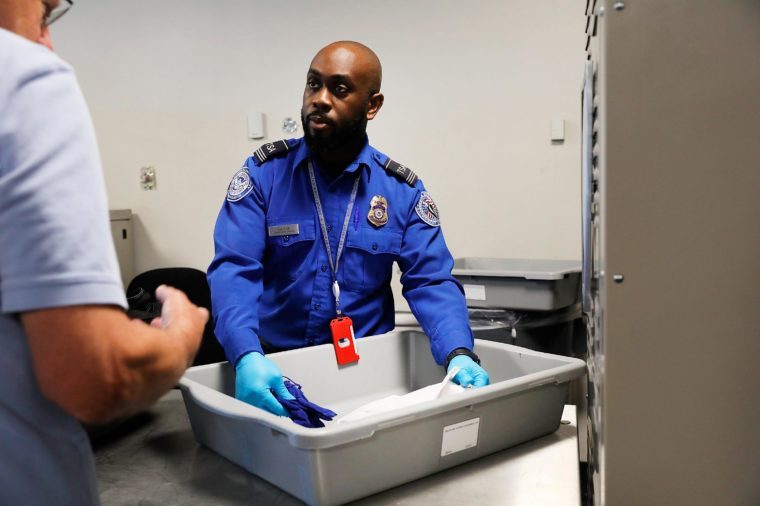 You may have noticed that the TSA agents wear gloves during the pat-downs. As a result, many passengers ask them to change their gloves before they’re subjected to this security task. While you may think it’s a reasonable request—especially if you’re a germaphobe—this is a huge pet peeve for TSA agents, who are sick and tired of changing their gloves all the time, according to the Travel. Maybe if they standardized their glove-changing times, we’d feel better? Like if they had a schedule where they had to change their gloves every seven minutes? But for all we know, the gloves are put on at the beginning of the day and removed at the end—and that’s just gross. That said, while you can certainly make this request, don’t expect your TSA agent to be happy about it. 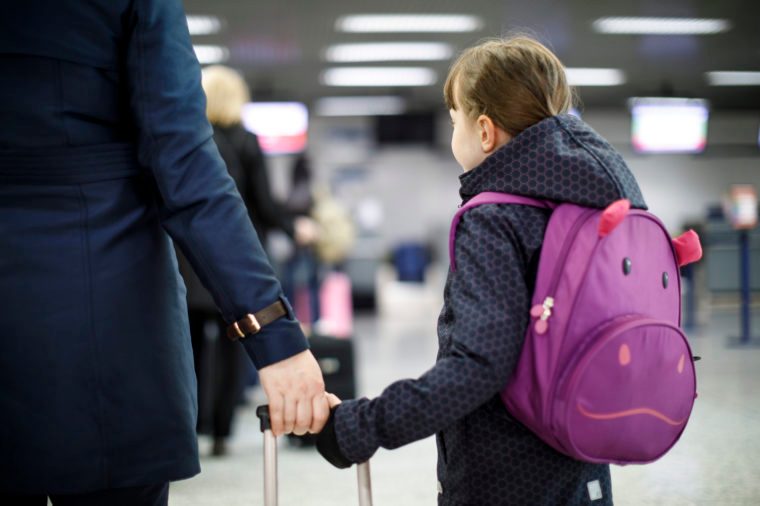 Racing ahead of your kids

Children have to go through the checkpoint scanner, and if you’re traveling with a child, of course you have to go through that scanner, too. But—and I’ve never been told this explicitly although I’ve traveled with my children hundreds of times—you’re apparently supposed to go through the scanner after your children, not before them. Oops. It’s annoying to the agents when you go before your kids, according to Insider, because if you go before them, the children are left in the hands of the TSA for that time. The TSA agents are not babysitters. Move the kids in front of you and keep your eyes on them at all times. Here are some more things to keep in mind—and ways to keep your sanity—when flying with children.