We asked readers to submit a photo they took of the American flag and to tell us what it makes them feel. Here, the Grand Prize winner of our photo contest, plus more powerful finalists.

Shortly after his deployment to Afghanistan, my younger brother was wounded in an enemy rocket attack. I decided to create a photo essay to honor him and all those who have served. I photograph people with the Stars and Stripes and ask them what the flag means to them. Pictured here is retired Marine Robert Frazier, running across his family’s cornfield in Harrisonburg, Virginia. He, and I, are very proud of this country. —Kate Magee, Richmond, Virginia.

Flag in a droplet

From my desk on the 22nd floor of my office in Philadelphia, I have an incredible view of the flag on the roof of the building across the street. I snapped this photo two years ago on a rainy day in April. When I went to edit it on my phone, I noticed that each raindrop was tinted with red, white, and blue. The complete American flag is reflected—reversed and upside down—in the center drop. —Ashleigh Rockey, Kirklyn, Pennsylvania. If you love these American flag pictures, check out these American flag facts you never knew.

After a windstorm last July, the flag in front of our home got flipped up and stuck on the flagpole. My boyfriend, an Air Force veteran, went outside to untangle it. About 15 minutes later, I realized he was still there, admiring the flag and watching the cars go by. I grabbed my camera and took this photo from our kitchen window. My boyfriend had no idea until he came inside, but now he thinks it’s just as idyllic as I do. —Michele Garrant, Mooers Forks, New York.

Long may it wave

When I arrived at the Washington Monument on a photography trip in September 2014, I had a certain idea: to shoot straight up the monument and toward the sky. But after seeing the circle of 50 flags that surrounds the bottom of the structure, I decided I wanted a shot from the base of a flagpole. I revisited the site about four times throughout the day to find an hour when the sun did not conflict with the photo. In the end, I took just one picture. This was it. —Patrick Trepp, Cedar Rapids, Iowa. Don’t miss these facts about Washington D.C. you didn’t know.

On a cloudy morning walk along the Wisconsin shore of Lake Superior last July, my husband, my father, and I spotted this configuration of colorful rocks in the sand. I felt moved that someone had created such a distinct display of patriotism. And because my son had just completed four years of service in the U.S. Army, it meant that much more. The beach was empty on this day, but we left the arrangement undisturbed for others to enjoy as well. —Julie Bishop, Weatherford, Texas.

This flag flies over the honor roll memorial marker on the west side of my town’s historic courthouse in Hamilton County, Indiana. I took this photo just before Memorial Day a few years ago, and loved the curved angle that the bottom edge of the flag made as it folded in on itself after a gust of wind. The flag quietly honors our heroes—the men and women who earned the freedom that I enjoy. —Andrew Schmidt, Noblesville, Indiana

Nothing reflects our country’s history better than Old Glory and old barns. On a bitterly cold winter’s day, I decided to hang this 8-foot-wide flag on our decades-old barn in Cool Ridge, West Virginia. The sun came out briefly during a break in the storm and lit the barn up from behind. This image was the result. —Lynn Carr, Cool Ridge, West Virginia. Check out more American flag pictures in the most surprising places.

I took this photo on the Matanuska ferry between Haines and Skagway, Alaska. The photograph displays the American flag in one of the most remote parts of the country; the mountains in the background are part of the Chilkat Range. Contrasted with this young man’s back, the flag becomes a symbol more important than any one person’s identity; it eclipses race and gender to become an image of something greater than each of us as individuals. —Bredt Bredthauer, Temple, Texas

My daughter lives in Hermitage, Pennsylvania, and the Avenue of 444 Flags is right nearby. We always walk through it whenever I visit her and her family. The memorial is both a visual and auditory experience. The sight of so many American flags is striking, but the whipping sound they make in the wind is unreal. Sometimes it’s difficult to hold a conversation around them. —Sandra Miller, Buckhannon, West Virginia. According to this essay, we’ve forgotten to teach our kids patriotism. Here’s how to bring it back.

Back at the base

With my husband deployed to the Middle East with the Air National Guard, I live in the largely military town of Mountain Home, Idaho, near Mountain Home Air Force Base. This photo symbolizes the support of military families for our country. It also shows the love these two have for one another. —Riza Medina, Mountain Home, Idaho

I took this photo of an American flag beach towel at a breezy park where driftwood is born. The flag looks so beautiful against the tree and the ocean. —Mary McCarey, Tamarac, Florida

I took this photograph in November of 1994 on St. Mark’s Place in Manhattan, New York. I was staying in the East Village while taking a month-long photograph tutorial with a master student of Richard Avedon. The blue of the building was bright and beautiful. The flag looked very weary and sad. It was a hard time in my life. In the flag I saw empathy and felt comfort. I lifted my camera and took the photograph. —Carol Stroll, Pittsfield, Massachusetts

I was on a location scout for a movie in Montana and we stopped by a small general store in a tiny town. There was a tall makeshift flagpole with an old, worn but still vibrant American flag on it flying proudly in the wind. — Phill Matarrese, Alameda, California. If you like these American flag pictures, you’ll want to check out this state flag quiz, too.

Stripes at every angle

I chose this image because I believe it symbolizes freedom for all and represents the many aspects of freedom we have in this country that we should always remember. —Ruthann Greene, Meridian, Idaho

The land in Idaho where we live is pristine with a large number of animals. Forest fires are common in the late summer months. The Wesley Fire that occurred in 2012 threatened the entire valley. Using our pond water to fight the fire, we felt compelled to show support for the resources used to protect us. I saddled my horse Moonshadow and rode parallel with the helicopter, proudly flying the American flag. The crew of the Sky Crane responded with their siren, and at that moment I had the clear understanding of the pride in being an American. —Susan Schaffer, New Meadows, Idaho

I took this photo in the Atlantic Ocean on top of the sail of the USS Norfolk, a U.S. nuclear-powered fast attack submarine on its final mission prior to inactivation in 2015. I am a U.S. Navy submariner who truly enjoys the opportunity to defend this great nation. —Michael Dlabaj, Kittery, Maine. Don’t miss these 10 American flag etiquette mistakes you might be making. 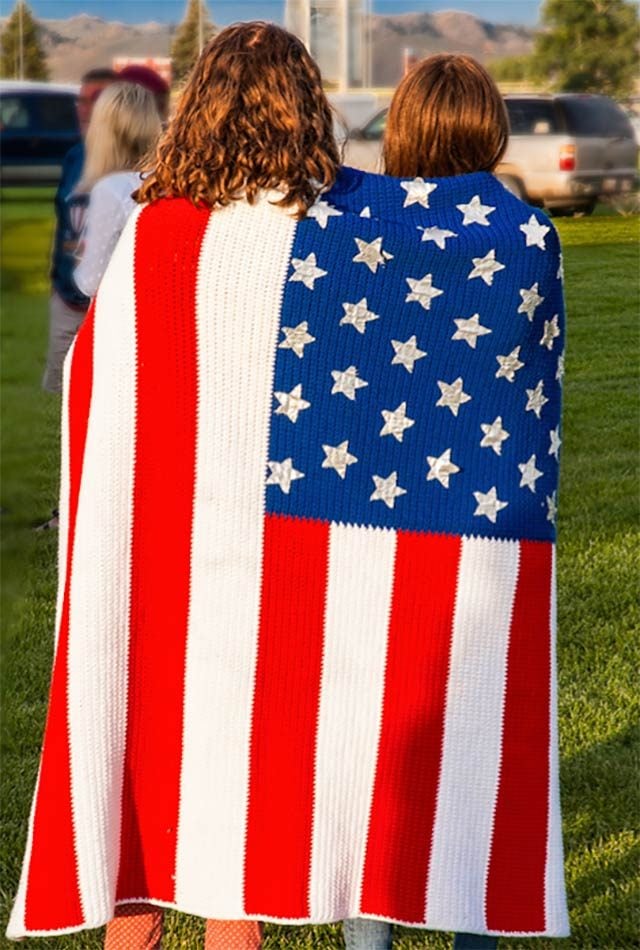 On the morning of July 4, 2015, many of us gathered for the Gunnison hot air balloon ascent. While awaiting liftoff, some students from Western State College arrived. These young ladies positioned themselves in front of me. Wrapped in the “flag blanket” reminded me of the many virtues symbolized by our flag. —Mark Greenberg, Leawood, Kansas 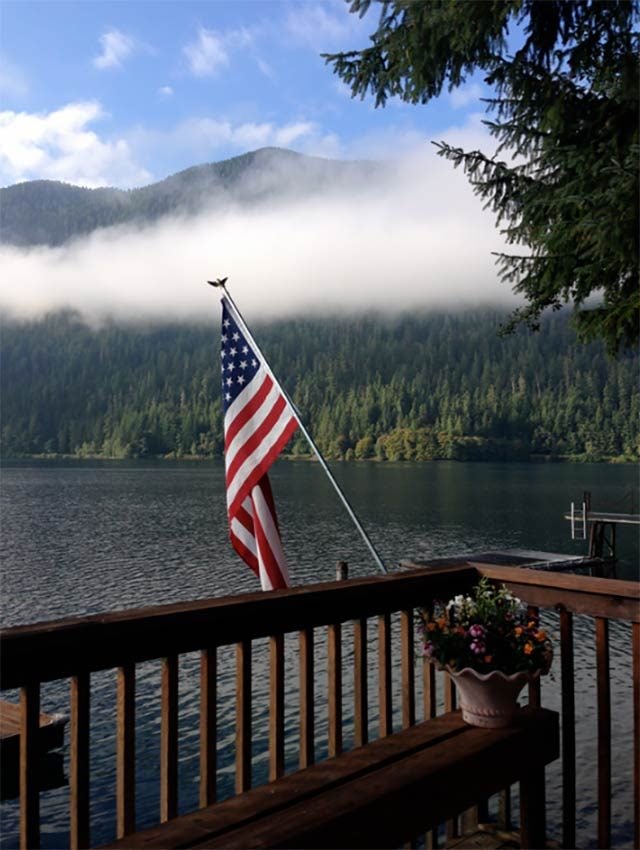 My husband is a Vietnam veteran. This American flag is one of four flags that are proudly displayed over Lake Crescent with the Olympic Mountains in the background. We are part of a unique but small group of private property owners living in the Olympic National Park. We display the American flags as a symbol of our love, loyalty and respect for America. —Karen Jensen, Port Angeles, Washington. If you’re enjoying these American Flag pictures, you’ll enjoy these facts about America you never learned. 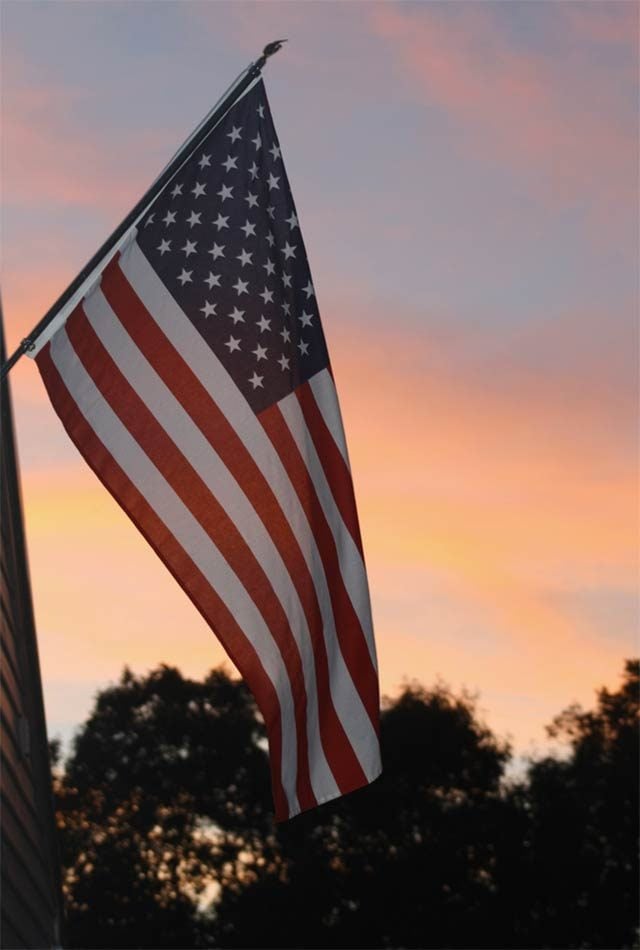 I snapped this photo of the flag that flies at my home. The splendor of our American flag, gently unfurling as the sun set behind it, created a serene ending to the day. —Kelli Druckemiller, McClure, Pennsylvania

We all looked to the skies with pride, respect, and admiration as a member of the U.S. Air Force Academy Wings of Blue precision parachute team floats through the clear blue skies above Davis-Monthan Air Force Base in Tuscan, Arizona. —Beth Holt, Box Elder, South Dakota

Photo was taken at the Bolivar ferry landing during the month of November, 2015 after the Paris terrorist attack. The Texas D.O.T. ferries which operate between Galveston and the Bolivar Peninsula flew their flags at half mast in honor of the victims of that attack. As you can see, the sun shining behind the flag created the image of a cross. —Patrick Jackson, Crystal Beach, Texas. 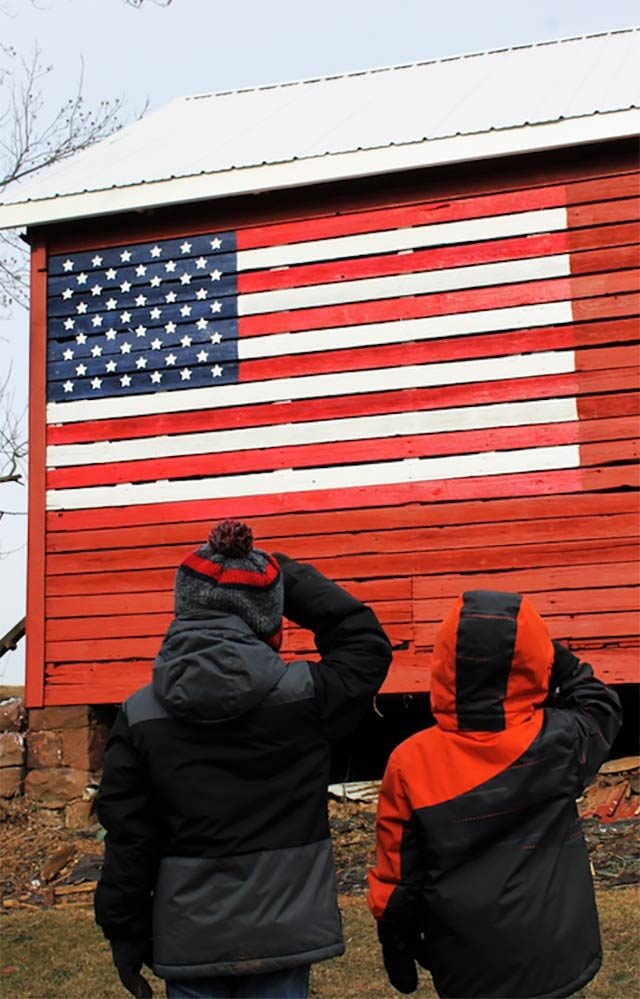 My nephew, who recently retired from a 24-year Army Reserve career, moved back on the farm where he was raised. He decided to restore an old shed. Over several days, he primed and then began transforming the faded boards into a traditional barn red. With just the upper left hand portion of the shed remaining to be painted, a thought struck him: “I wonder if I could create a flag on that remaining section?” Here is the final project with his grandsons Aiden and Jaxson. —Margaret Yost, Etters, Pennsylvania

This photo was taken after a wonderful day with family and friends. Staring up at our beautiful flag never fails to fill me with pride. I love how the fireworks illuminate the flag, gracefully waving in the breeze. —Merry Carter, Feasterville Trevose, Pennsylvania. Here are America’s most spectacular 4th of July fireworks.

The American flags represented thousands of Louisiana soldiers who had given their lives for our magnificent country. My 2 ½ year old grandson was in awe of so many flags. He reached to straighten a leaning flag. That was the moment I captured and could internalize those Louisiana soldiers gave their lives so that my little grandson could walk freely as an American citizen. —Charlanne Cress, Zachary, Louisiana

While respectfully facing the nearest flag, as the start of the work day Colors played, I thought I spotted a bald eagle sharing this honorable tribute with me. After the daily tradition concluded, I grabbed my camera. When I could zoom in on the image, I realized (with goosebumps) that I was witnessing two of the country’s most enduring symbols in one single frame. —Michael Nyikes, Suffolk, Virginia. Now that you’ve seen this amazing American flag pictures, find out the U.S. trivia you never learned.