These nationally recognized landmarks underscore both the rich legacy and the often-troubling reality of Black Americans throughout our nation’s history. 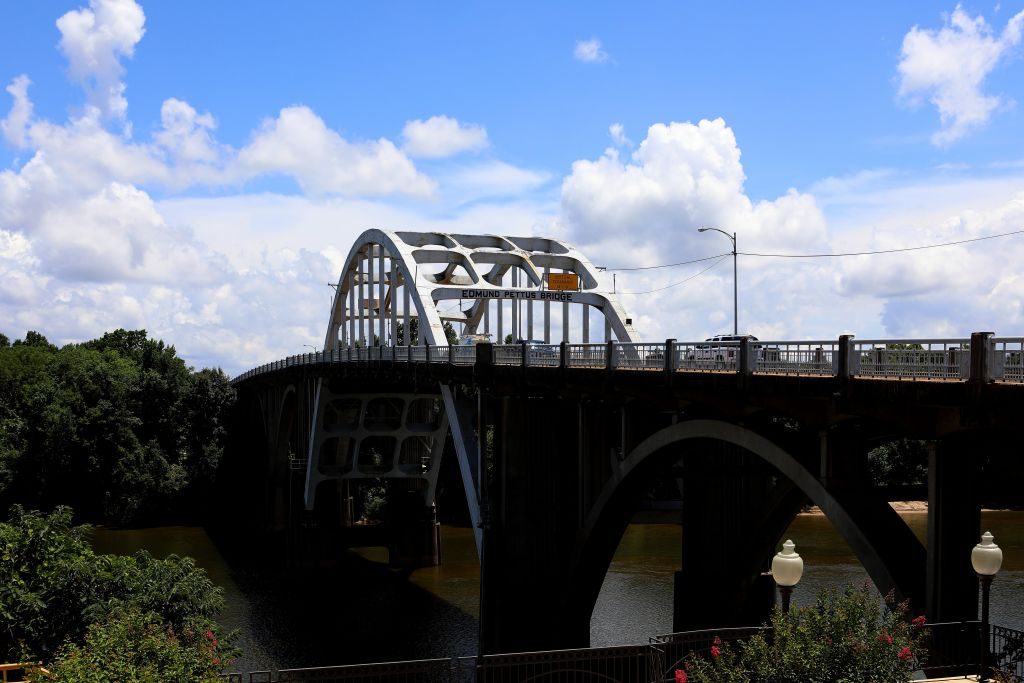 A more complete version of history

It is undeniable that Black people in America have shaped the cultural and historical landscape of this country in many ways. From fighting in wars for civil liberties to contributing to the legacy of the Harlem Renaissance and beyond, the investments of Black people on American soil runs deep. But their very real contributions and sacrifices aren’t always acknowledged or honored. That’s why these landmarks are so significant. They are physical testaments to the spoken and unspoken realities of Black people that occurred in those spaces, and their existence represents a mark in American history that can never be erased. Check them out in person or online, and while you’re at it, learn about these other incredible Black Americans who have been left out of history books. 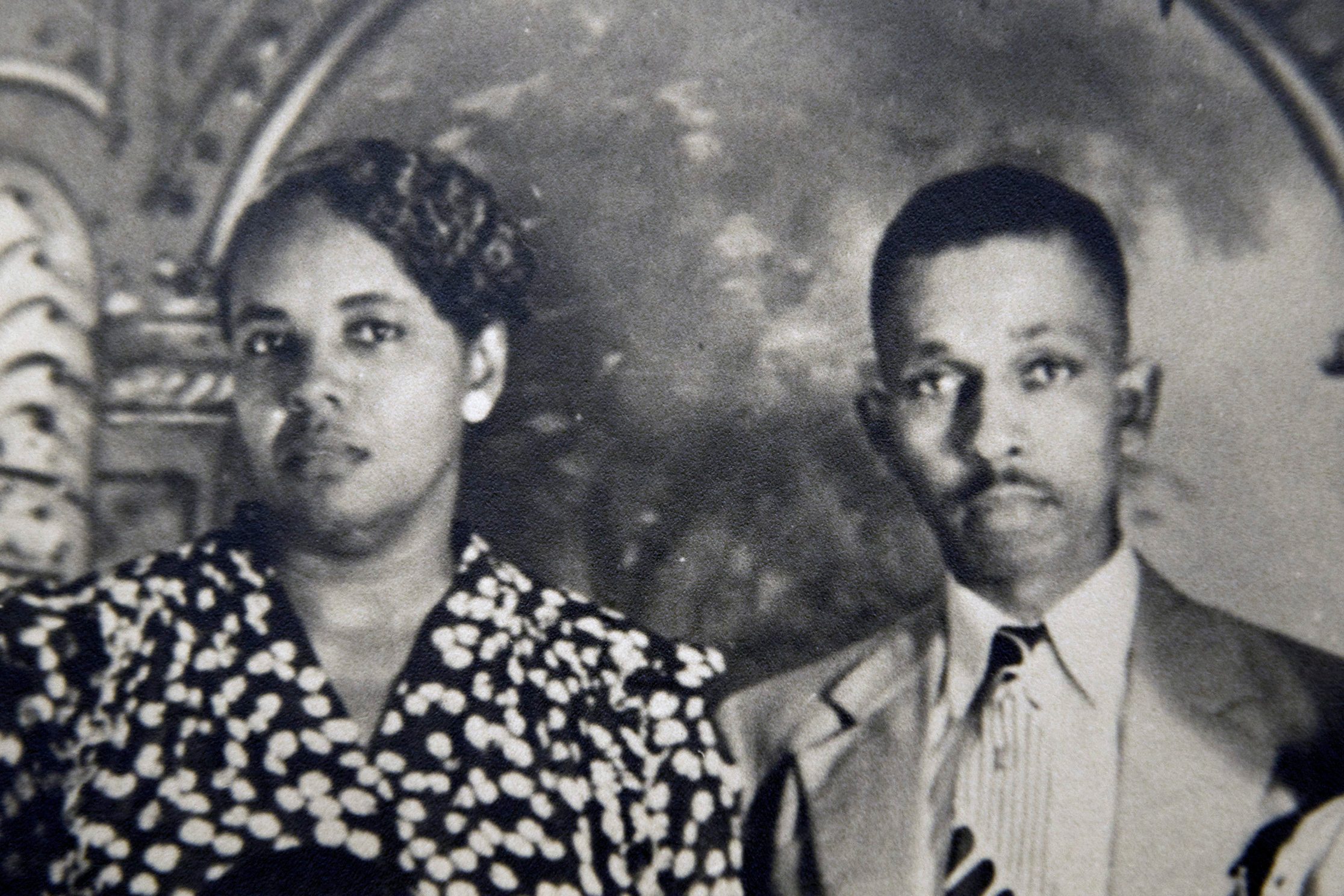 Harry Moore and his wife, Harriette, were the first members of the NAACP to be assassinated. Before they numbered among “the first martyrs in the civil rights movement,” they were educators, and they founded Florida’s Brevard County chapter of the NAACP in 1934. During the course of their activism, they fought for equal pay for Black teachers, equal voting rights for Black Americans, and desegregation in Florida schools. Late one Christmas night in 1951, a bomb went off beneath the couple’s home in Mims, Florida. Their assassination triggered protests across the country.

Now a historic Florida landmark, a replica of their home stands where their original home once did. The site also houses a cultural complex in their honor called the Harry T. & Harriette V. Moore Memorial Park, which includes a museum that examines the Moores’ legacy. In case you were wondering, this is why desegregation didn’t put an end to racism in America. 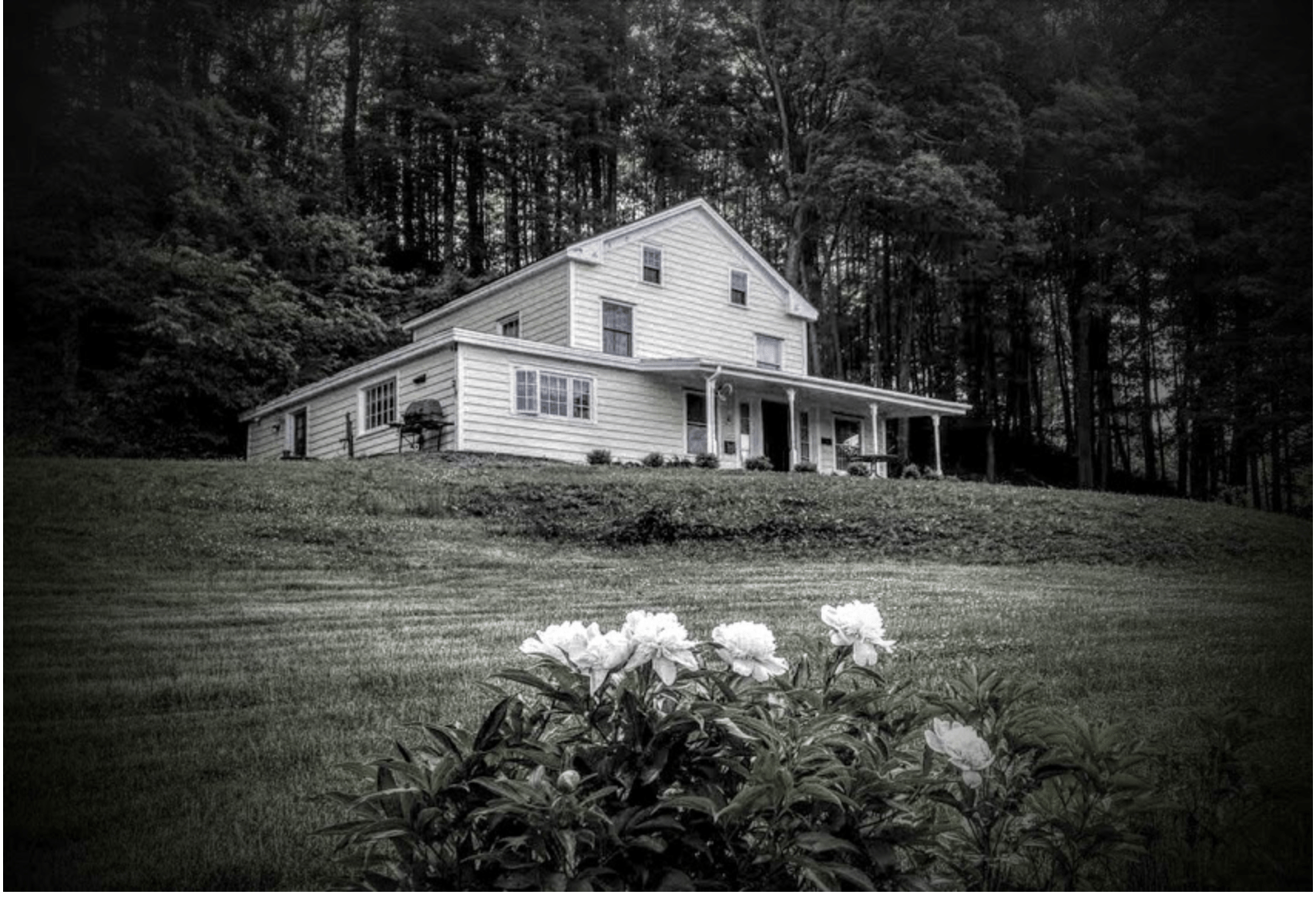 The Augusta Savage House and Studio

Augusta Christine Savage was a prominent visual artist, sculptor, educator, and social activist during the Harlem Renaissance. As the first Black woman to open her own art gallery in America and the director of the Federal Art Project, she used her influence to fight for equal rights for Black Americans in the arts. According to the New York Times, Savage led an adventurous life: “She ran art schools, befriended Harlem Renaissance intellectuals and produced realistic portraits in stone, wood, clay, plaster, and bronze. She won grants to travel in Europe, and her works were displayed at prominent exhibitions, including the 1939 World’s Fair.”

While she was born and raised in Florida, Savage also lived abroad, in New York City, and in upstate New York. Until she became ill, she spent 20 years living in her home and art studio in Saugerties, New York. (She died in 1962.) Now called the Augusta Savage House and Studio, it was listed on the National Register of Historic Places in 2000. Recently restored, the site currently exhibits her work. 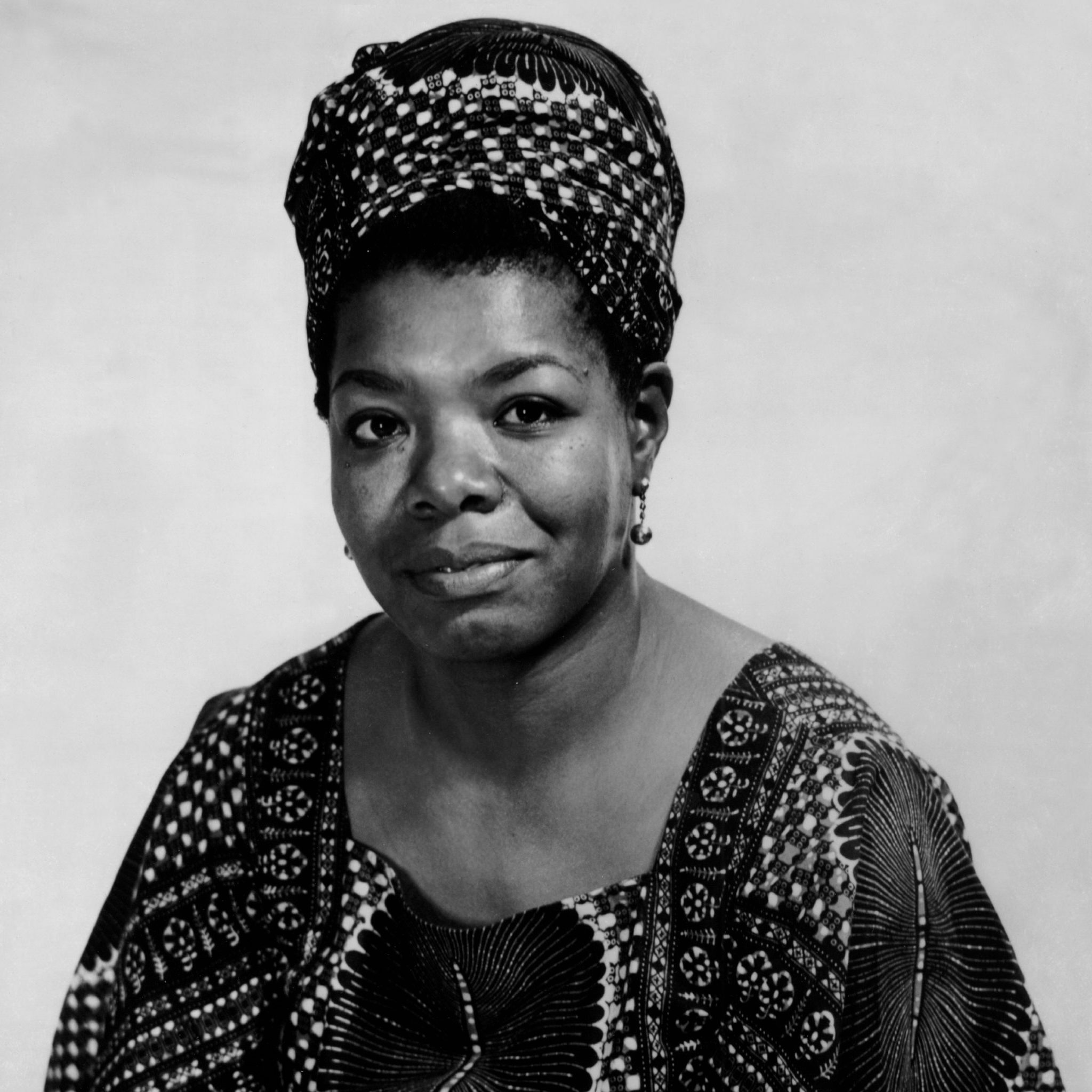 Maya Angelou’s legacy as an influential poetess, writer, and civil rights activist runs deep. The author of many memorable works, including I Know Why the Caged Bird Sings, she shifted global paradigms around racism, identity, and family over the course of her long career, and her work made a lasting imprint on American culture and the literary world. On December 12, 2015, her first childhood home in St. Louis, Missouri, was solidified in history as a landmark location. The landmark designation legislation states, “This modest house in a once-segregated St. Louis neighborhood helps to convey the journey Ms. Angelou made to become a renowned author, poet, performer and outspoken civil rights activist, and although Ms. Angelou’s life was spent in many places in the United States and abroad, the property comprises an important part of the history of one of the most prominent and respected women of her generation.”

These 8 quotable quotes show Maya Angelou at her best. 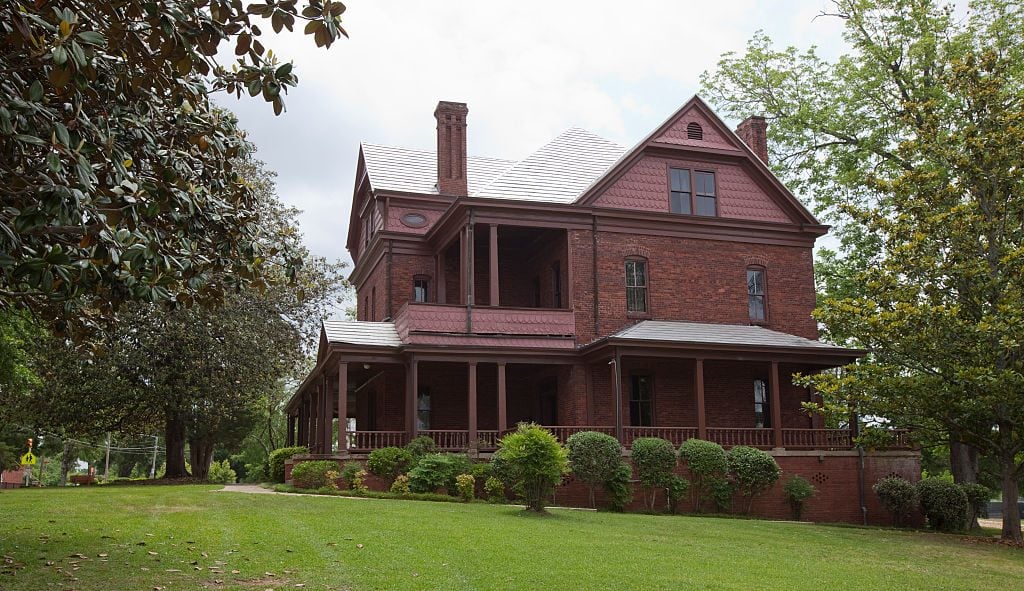 Founded by Booker T. Washington and Lewis Adams, two former slaves who became prominent Black leaders, Tuskegee University has a legacy of Black educational excellence. Soon after it was established in 1881, this Alabama institution quickly earned a reputation for having the nation’s top Black scholars. Washington recruited some of the brightest minds to teach at Tuskegee, including George Washington Carver, who has been credited with creating 300 different uses for the peanut. Plus, according to Forbes, “Tuskegee has produced more African-American generals than any other institution in the U.S., is the No. 1 producer of African-American aerospace science engineers in the nation, and the largest producer of African-Americans with baccalaureate degrees in math, science, and engineering in Alabama.”

In 1974, the National Park Service designated the entire campus as the Tuskegee Institute National Historic Site. Today, visitors can take a guided tour through the home of Booker T. Washington, visit the George Washington Carver Museum, and more. 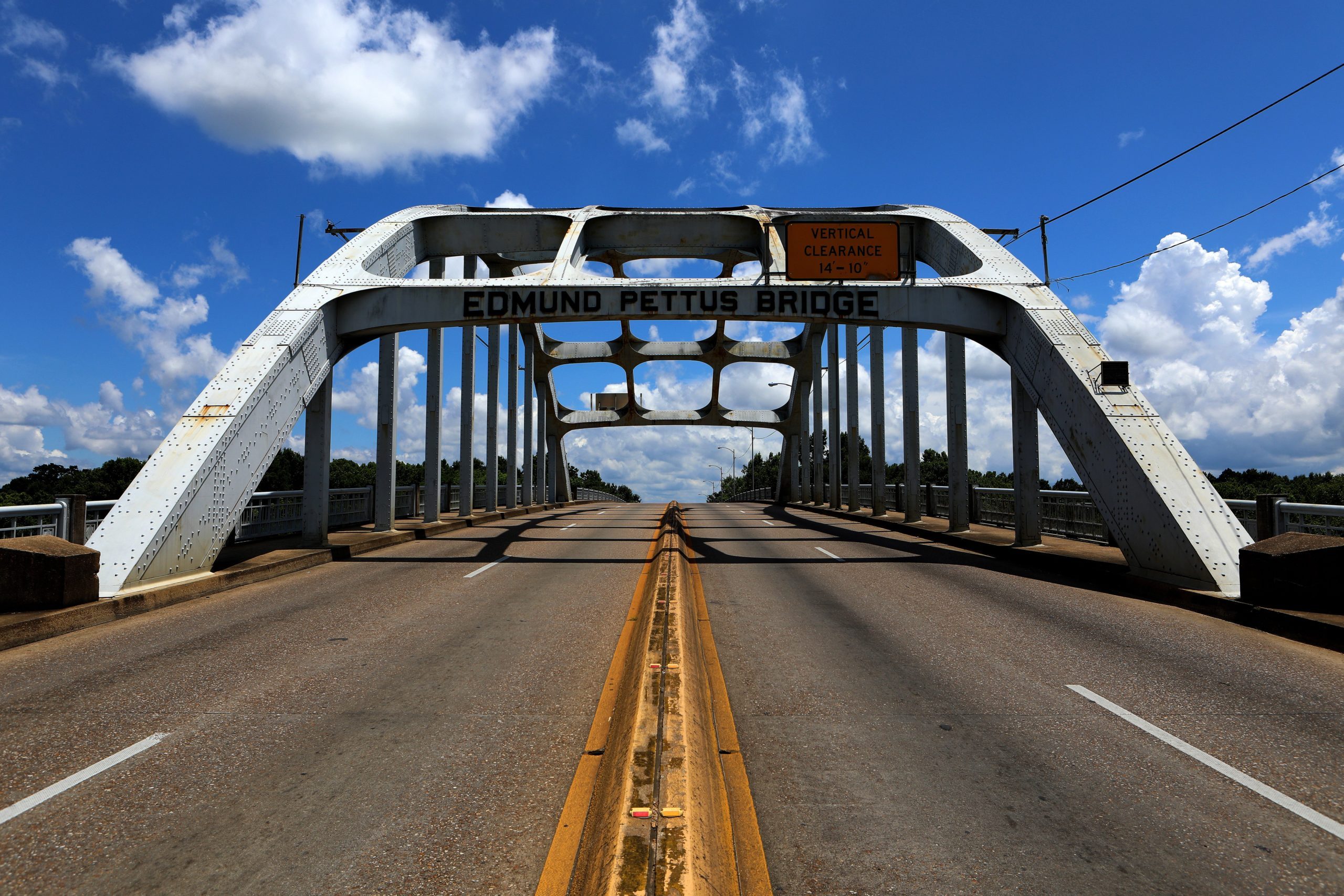 Though named after a U.S. Senator who was a Confederate general and Grand Dragon of the Ku Klux Klan, this historic bridge in Montgomery, Alabama, became the site of a major catalyst for change in the fight for racial and social equality. It was the site of 1965’s horrific Bloody Sunday attacks, in which unarmed marchers and protesters were beaten by armed police officers as they marched for voting rights and equality. Because the events were widely televised, support was garnered for the Selma voting rights movement. The three Selma to Montgomery marches have been depicted in American culture and history in films such as Selma and Selma, Lord, Selma.

The Edmund Pettus Bridge, which is also a part of the United States Civil Rights Trail, was designated a National Historic Landmark on February 27, 2013. In recent news, activists are currently petitioning to rename it after civil rights leader John Lewis. To delve into American history even more, check out this list of the most iconic landmarks in every state. 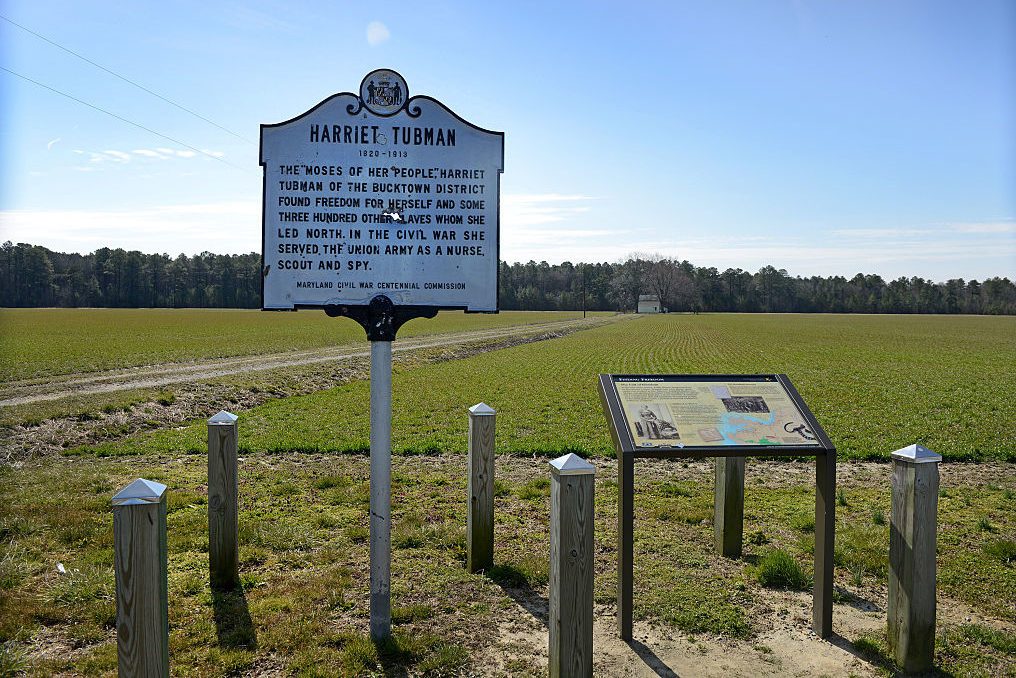 You probably know the story of Harriet Tubman: She is considered a national hero who led more than 70 enslaved people to freedom on the Underground Railroad after escaping slavery herself. At this historic park, which was designated as a landmark by President Barack Obama in 2013, you can see the marshlands and natural terrain that she once navigated. According to the Conservation Fund, the park “commemorates Tubman’s life work on the Underground Railroad in the landscape of marshes, woodlands, and fields that are reminiscent of the backdrop for her early life on the Eastern Shore.” When visiting, you can explore exhibits, watch films, engage in other audio-visual programming, take guided tours, and more. 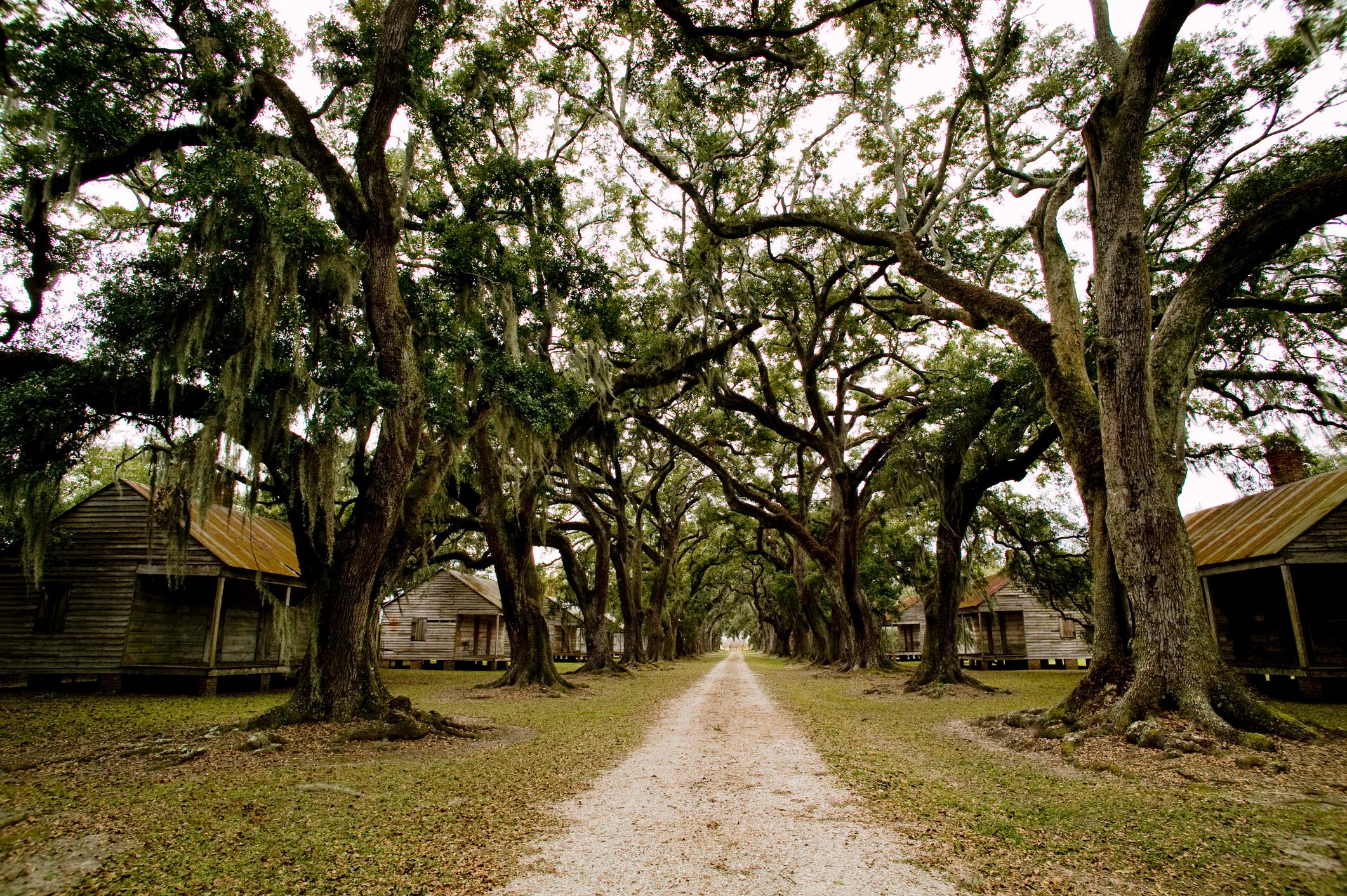 Visiting the Evergreen Plantation in Wallace, Louisiana, is like stepping into an archived moment in time. According to its website, this plantation is the most “intact complex in the South with 37 buildings on the National Register of Historic Places, including 22 slave cabins. Evergreen has its country’s highest historic designation and joins Gettysburg and Mount Vernon in being granted landmark status for its agricultural acreage.”

The plantation has a slavery database of more than 400 people who were enslaved there, and the Ancestor Project is committed to archiving the real-life experiences of those who once lived on the land. Today, the Evergreen Plantation is privately owned and still functions as a sugar-cane plantation. Though currently closed to the public because of coronavirus, it also normally offers guided tours that showcase an authentic glimpse into the past; for now, you can explore photos and the history of the plantation online. Here are more virtual tours you can take of American landmarks right now. 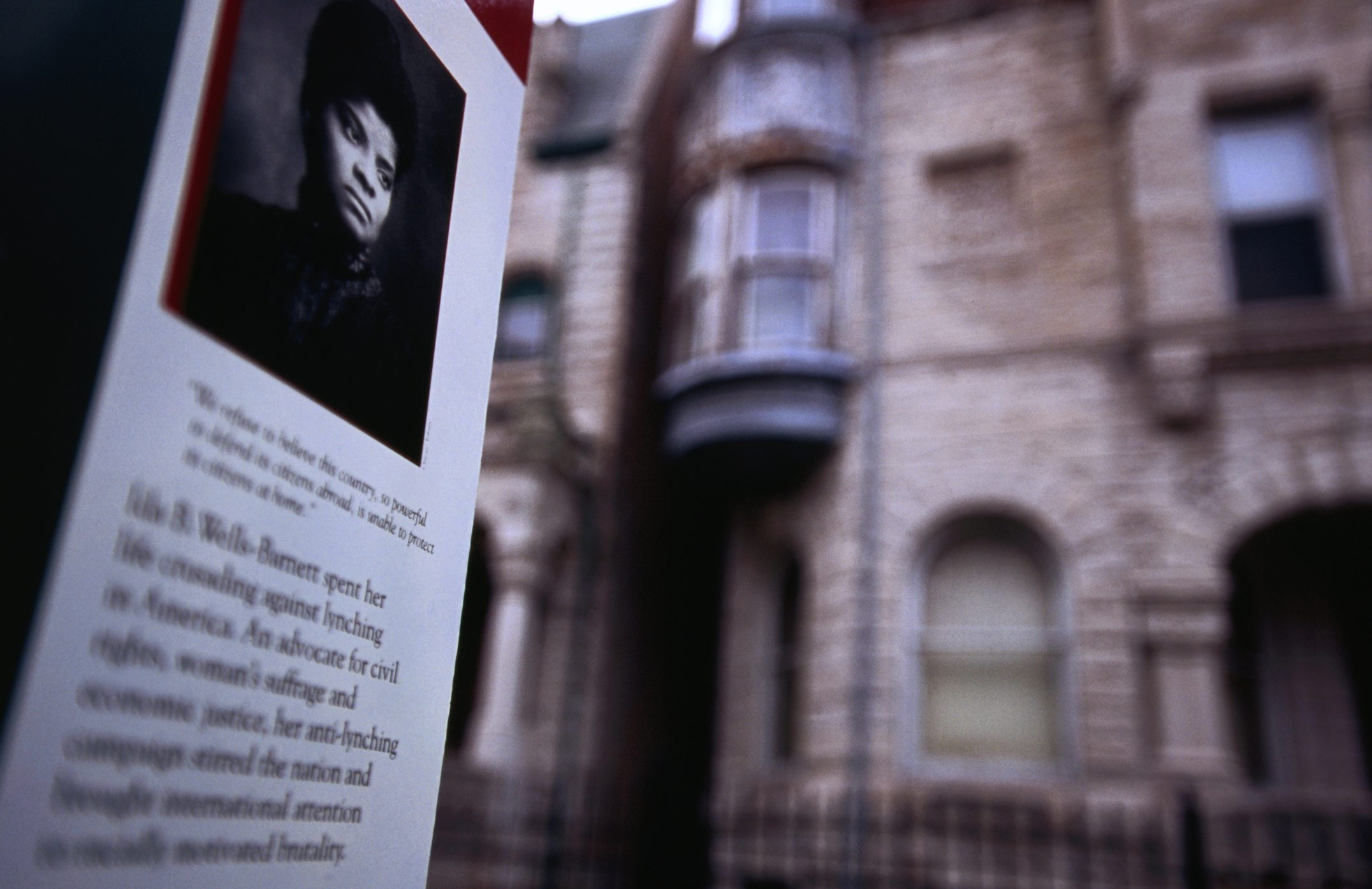 The Ida B. Wells-Barnett House

Ida Bell Wells was born into slavery, but she later became an educator, investigative journalist, civil rights advocate, and a founding member of the NAACP. She often wrote about lynchings and brought attention to these injustices and important issues. In one particularly powerful editorial, Wells, who co-owned a newspaper, wrote about the lynching of her close friend and his business partners; that editorial resulted in a riot, and she was subsequently threatened with lynching herself, according to History.com. Wells also founded Chicago’s first Black women’s club, first Black kindergarten, and first Black suffrage organization. After women in Illinois won state voting rights in 1913, her suffrage organization helped elect Oscar De Priest as the first Black alderman on the Chicago City Council.

Wells and her husband, Chicago attorney Ferdinand Lee Barnett, lived in a three-story Romanesque Revival home on Chicago’s South Side. On May 30, 1974, the home was listed as a National Historic Landmark. Learn why you should stop saying “I don’t see color.” 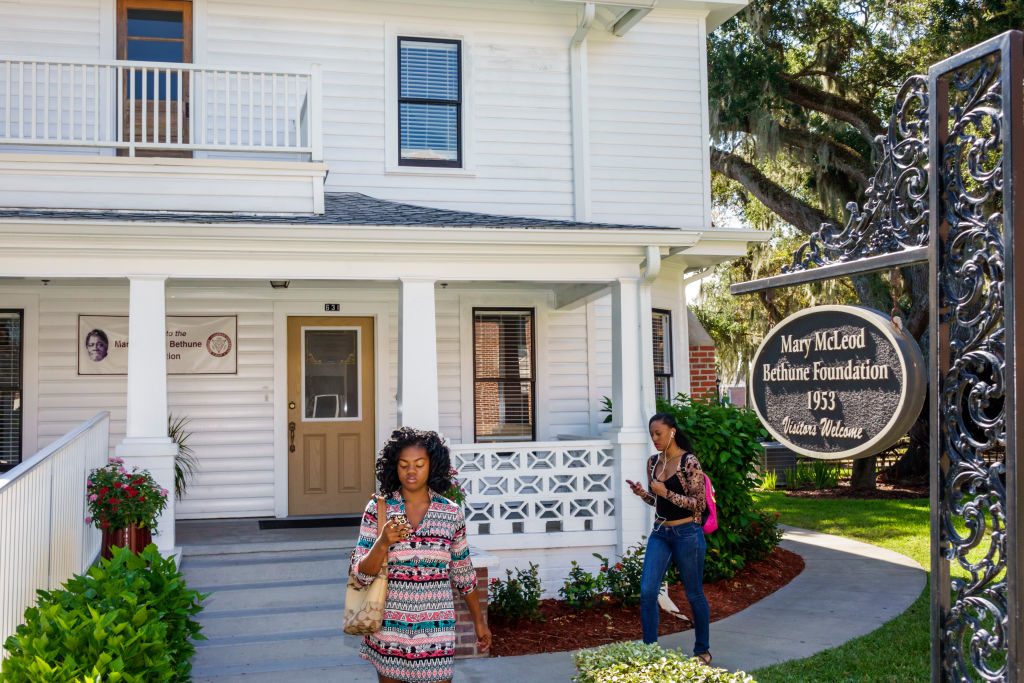 The home of educator and stateswoman Mary McLeod Bethune is located in Daytona Beach, Florida, on the property of the school that she established, Bethune-Cookman University. Born to formerly enslaved parents, she was a trailblazer in education for African Americans, founded the National Council of Negro Women in New York, and acted as an adviser to President Franklin D. Roosevelt in the 1930s; she was also a close friend of Eleanor Roosevelt. According to American Experience, “Franklin Roosevelt appointed her as Director of the Division of Negro Affairs of the National Youth Administration, a position she occupied from 1936 to 1943. He frequently consulted with her on minority affairs and interracial relations.” Check out the stories of these other incredible women you didn’t learn about in history class. 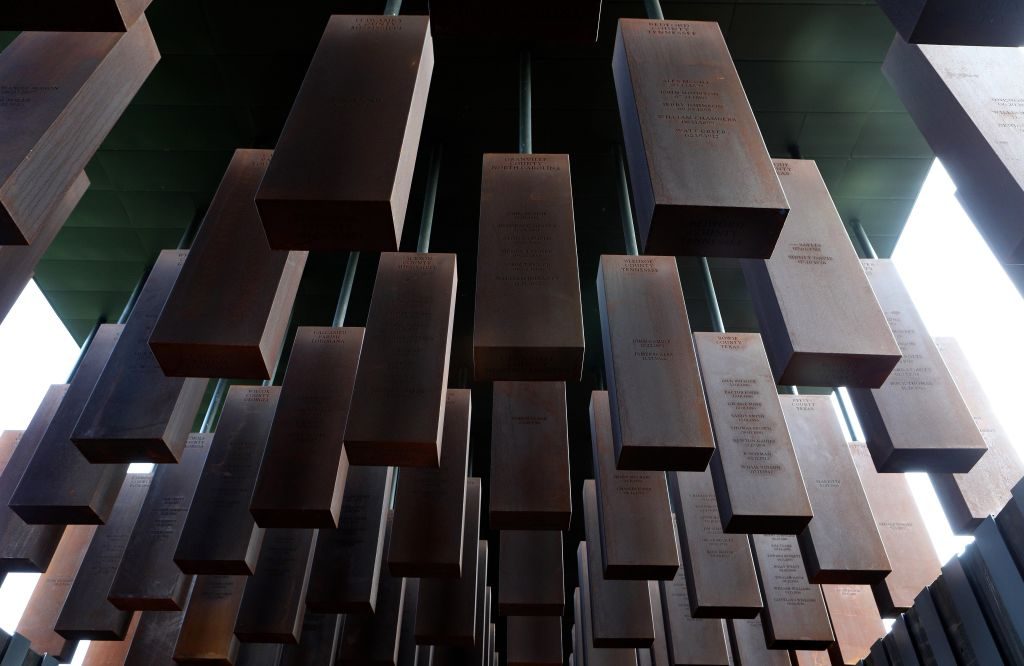 The National Memorial for Peace and Justice

The first national memorial that commemorates the “terror of lynching” in America, the National Memorial for Peace and Justice opened on April 26, 2018, in Montgomery, Alabama. For the memorial, researchers studied the records in counties throughout America and documented more than 4,400 lynchings. What makes this memorial so striking is its design, which includes 800 six-foot monuments—one for each county in the United States where lynching has taken place—onto which the names of the lynching victims have been engraved. According to the memorial’s website, “visitors walk a path through our history of racial injustice.” To get a better understanding of why this memorial was created and what you’ll see there, watch this video. 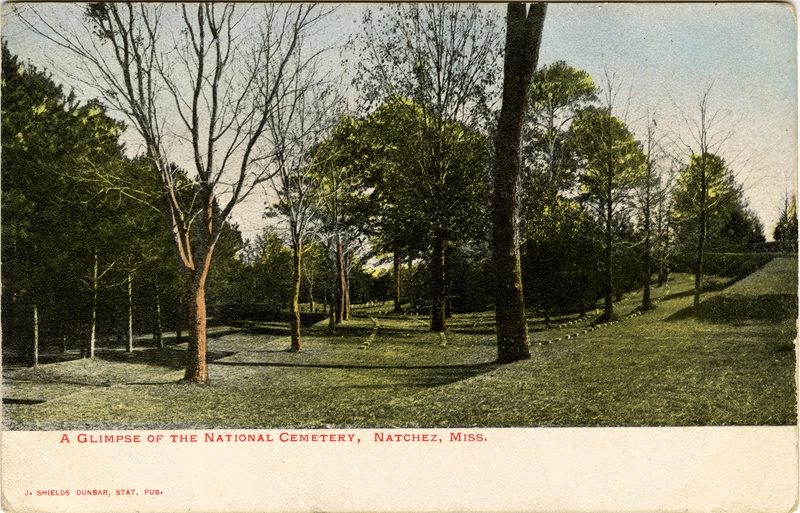 Courtesy Mississippi Department of Archives and History via wikimedia.org

This historic cemetery, located in Natchez, Mississippi, dates back to 1866. It is the final resting place of Black soldiers from both the African American 24th U.S. Infantry regiments and the 58th U.S. Colored Infantry. According to the Democrat, records indicate that General Ulysses S. Grant visited Natchez in August 1863 “to organize some African American regiments…[and] recruit as many able-bodied ex-slaves as possible from the surrounding plantations. Those not chosen were advised to stay on the plantations and help bring in the crops.” 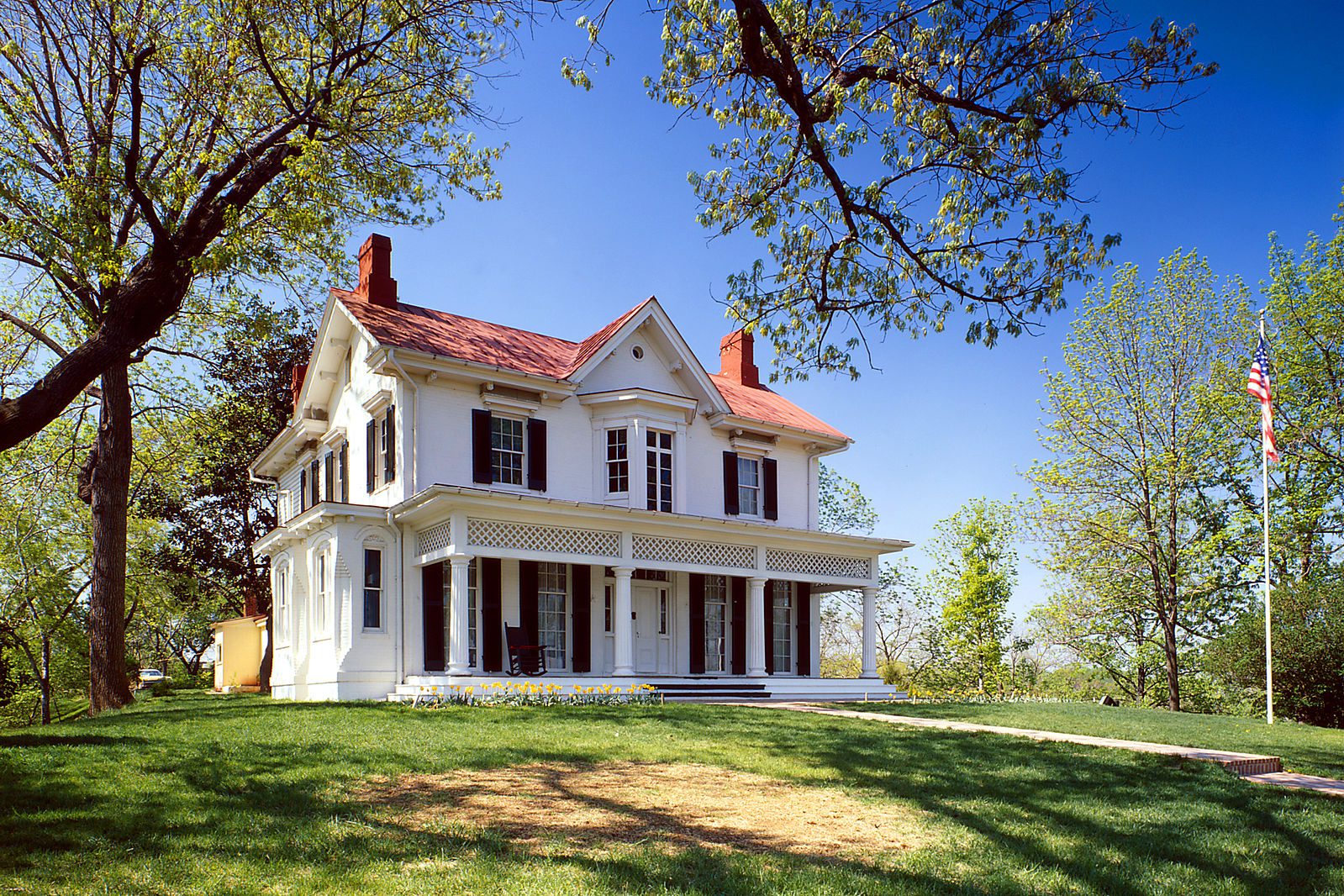 Walter Smalling for the Historic American Buildings Survey via wikimedia.org

A prominent leader in the abolitionist movement, Frederick Douglass helped to change the course of history for Black people in America. As you probably learned in school, he wrote a powerful testimony about his own life as a slave, and he was even nominated as a Vice Presidential candidate on the Equal Rights Party Ticket in 1872. He went on to write autobiographies and support the women’s suffrage movement, and he became one of the greatest speakers of his time.

His historic home, located in Washington, D.C., “preserves and interprets Cedar Hill, where Frederick Douglass lived from 1877 until his death in 1895. The centerpiece of the site is the historic house, which sits on top of a 50-foot hill and eight acres of the original estate. Restored to its 1895 appearance, the house is furnished with original objects that belonged to Frederick Douglass and other household members.” While temporarily closed because of the pandemic, you can take a virtual tour of the estate and site.

Next, take a look at these powerful quotes that speak volumes in the fight against racism.