It's all fun and games until someone gets hurt...or the powers-that-be make a terrible decision. 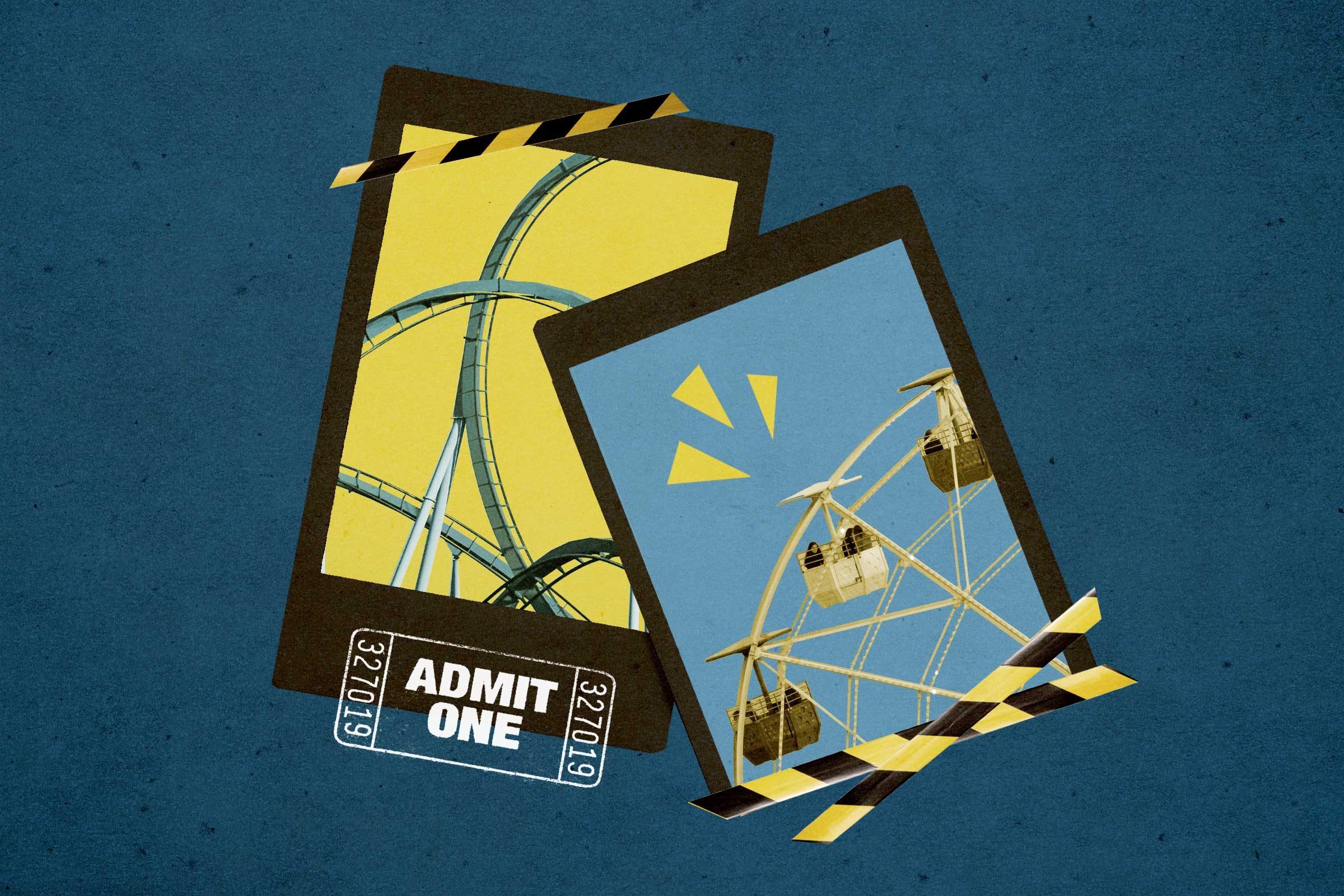 During a typical year (which means 2020 is excluded), amusement parks across the globe greet anywhere from hundreds of thousands to millions of visitors annually. They’re steeped in nostalgia, with grown-ups recreating memories of days spent frolicking among roller coasters and indulging in decadent treats, or introducing these same traditions to their children. But not every park goes off without a hitch—and some are plagued by controversy and tragedy. Even Disney World has found itself in the hot seat over the course of its illustrious existence. Let’s take a look at the ostensibly darker side of amusement parks, and, hey, if that doesn’t scare you off, check out our picks for the best amusement park in every state. 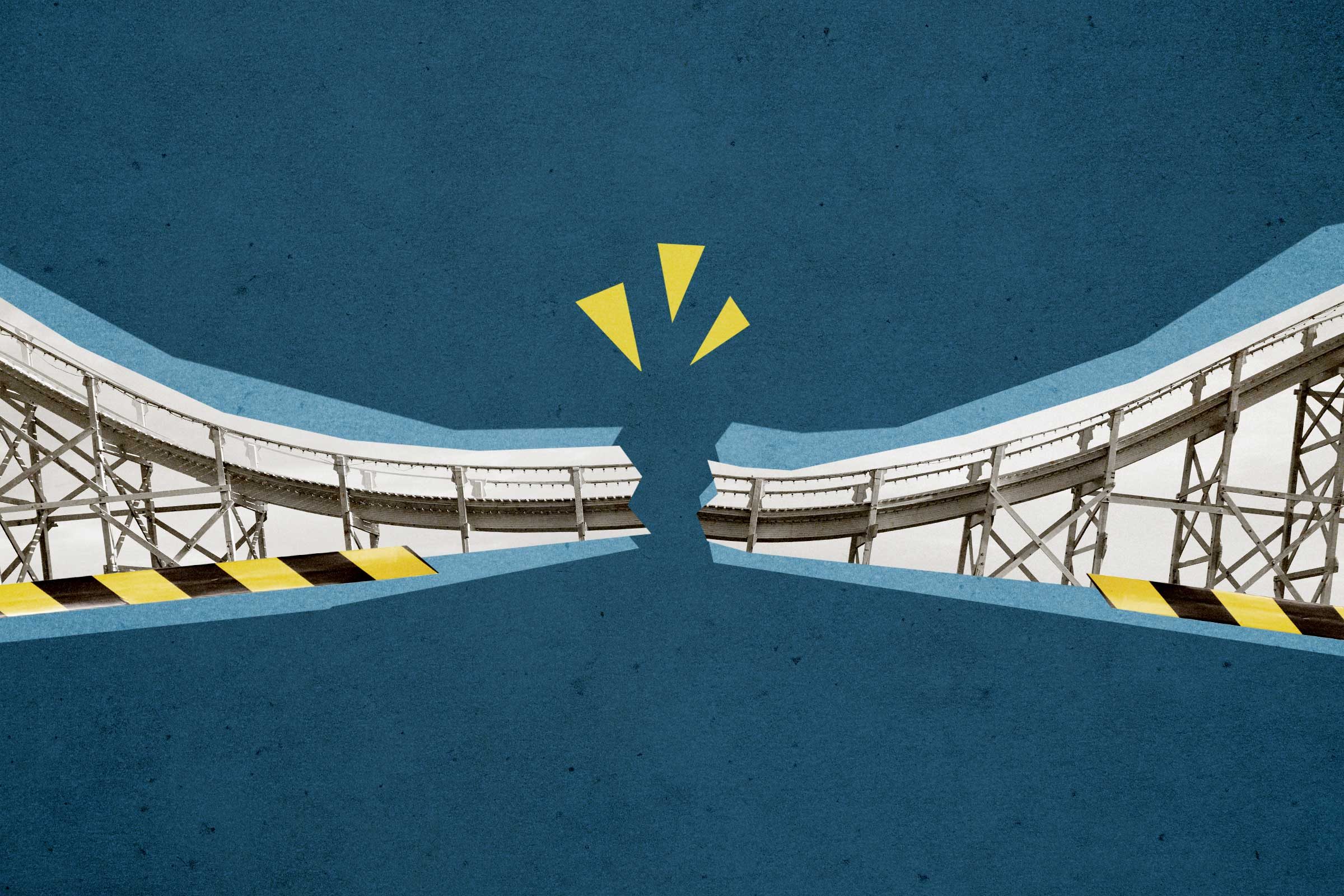 If you’re an amusement-park buff, it’s pretty interesting to see what happens when you pull back the curtain to reveal the hidden workings of these behemoth fun zones. In the case of New Jersey’s Action Park, everything you needed to know was pretty much right in front of you. Open from 1978 to 1996 (and to those who frequented the place, it’s shocking it didn’t close sooner), poorly constructed and maintained attractions like the Alpine Slide and Wave Pool resulted in the deaths of five people during the park’s tenure, according to the documentary Class Action Park, now streaming on HBO Max. Here are more of the most dangerous amusement park rides ever opened. 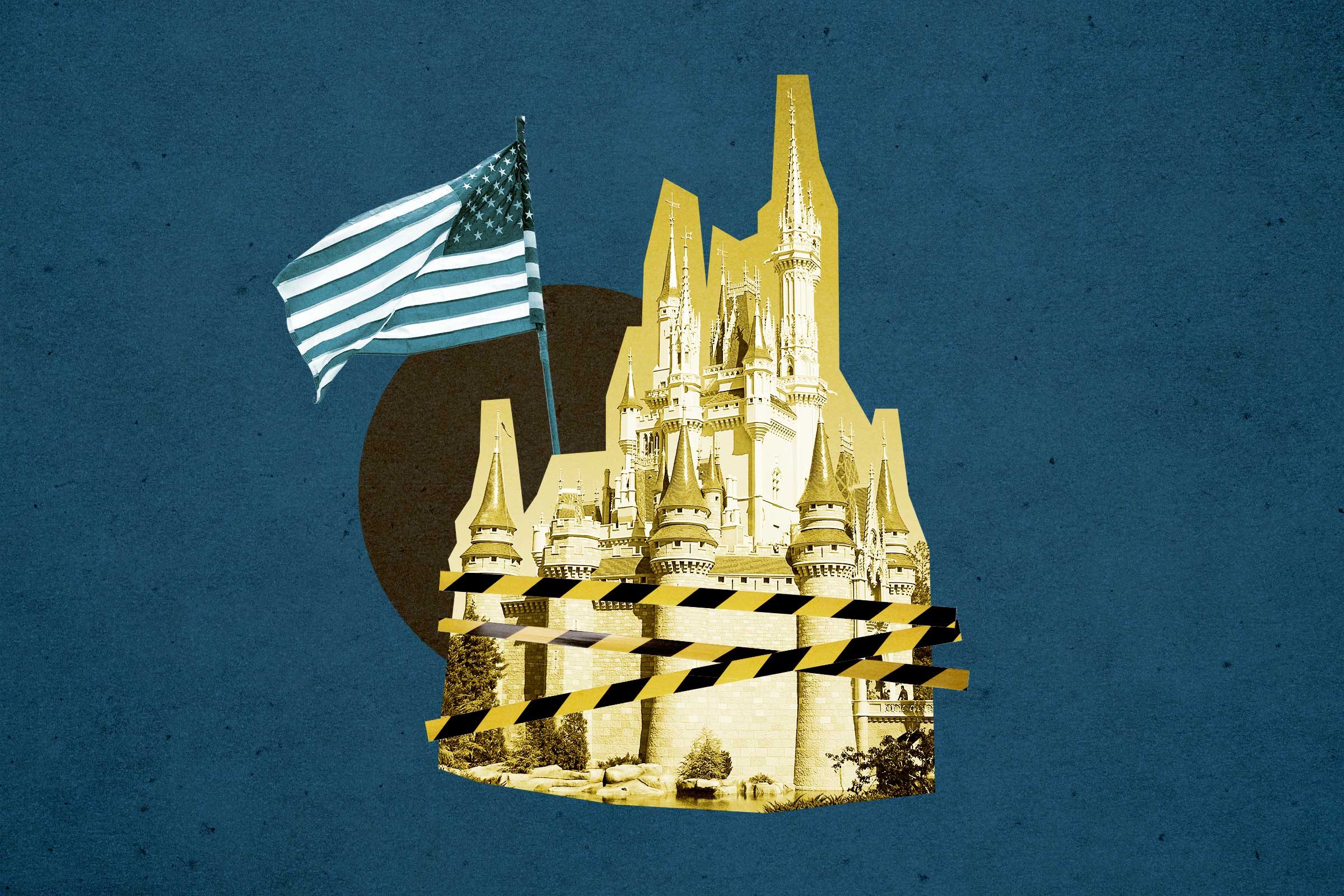 Apparently hosting the Hall of Presidents wasn’t enough for the Walt Disney Company, which, in the early 1990s, began snapping up land 30 minutes outside of Washington, D.C., to lay the groundwork for Disney’s America. According to Collider, it was supposed to be a history-themed park that was both educational and, of course, fun in nature. The planning even went so far as to illustrate different areas of Disney’s America, including Crossroads USA, Presidents Square, and We the People. However, both the wealthy neighbors of Disney’s ambitious new property and preservationists strongly opposed the project and allegedly mounted a quick attack.

The main issues? Aside from the residents’ worries about increased congestion and pollution in the area, some planned attractions had the potential to be handled insensitively, including one themed around the Underground Railroad. At a press conference, Disney’s Bob Weis told a roomful of reporters, residents, and politicians: “We want to make you a Civil War soldier. We want to make you feel what it was like to be a slave or what it was like to escape through the underground railroad.” Beyond that massive misstep, the property was also due to be built too close for comfort to the Manassas National Battlefield Park, which is where two major Civil War battles took place. Of course, we’ll always have Liberty Square in Disney World and Disneyland—even though it may look different for the foreseeable future. Check out these photos that show the “new normal” of Disney parks. 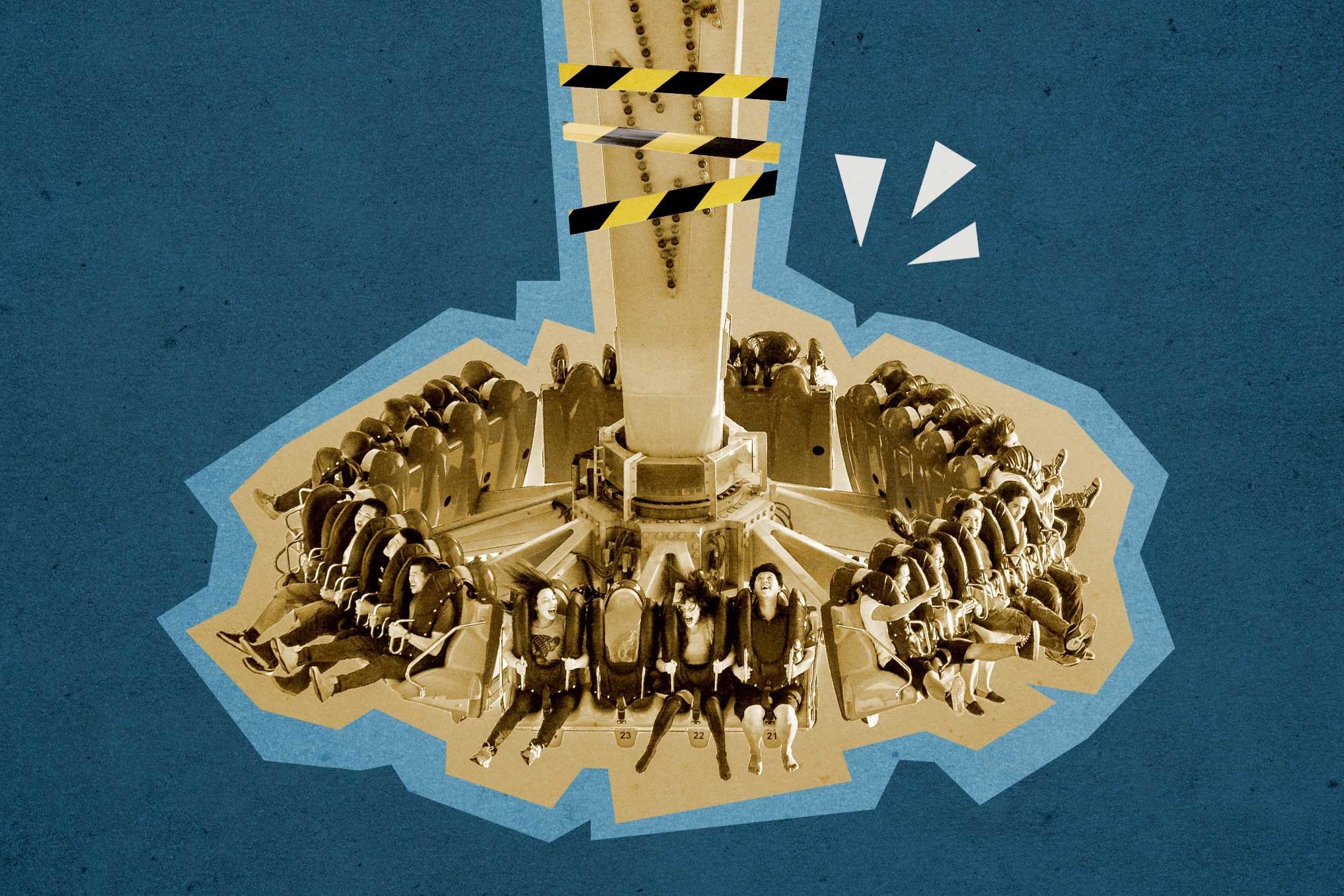 The unthinkable happened at India’s Kankaria Amusement Park, located in the city of Ahmedabad, when an attraction snapped in 2019. The accident resulted in two deaths and 29 injuries (the pendulum-style ride itself holds a total of 32 people). Time reported that the main shaft’s pipe had broken, causing it to splinter to the ground. At the time, there was no known cause for the break, but a local paper told CBS News that forensic-science specialists would investigate the damage to search for a cause that would hopefully prevent future accidents. Kankaria is still operational. A much safer bet? Taking over 20 of the best Disney World rides virtually. 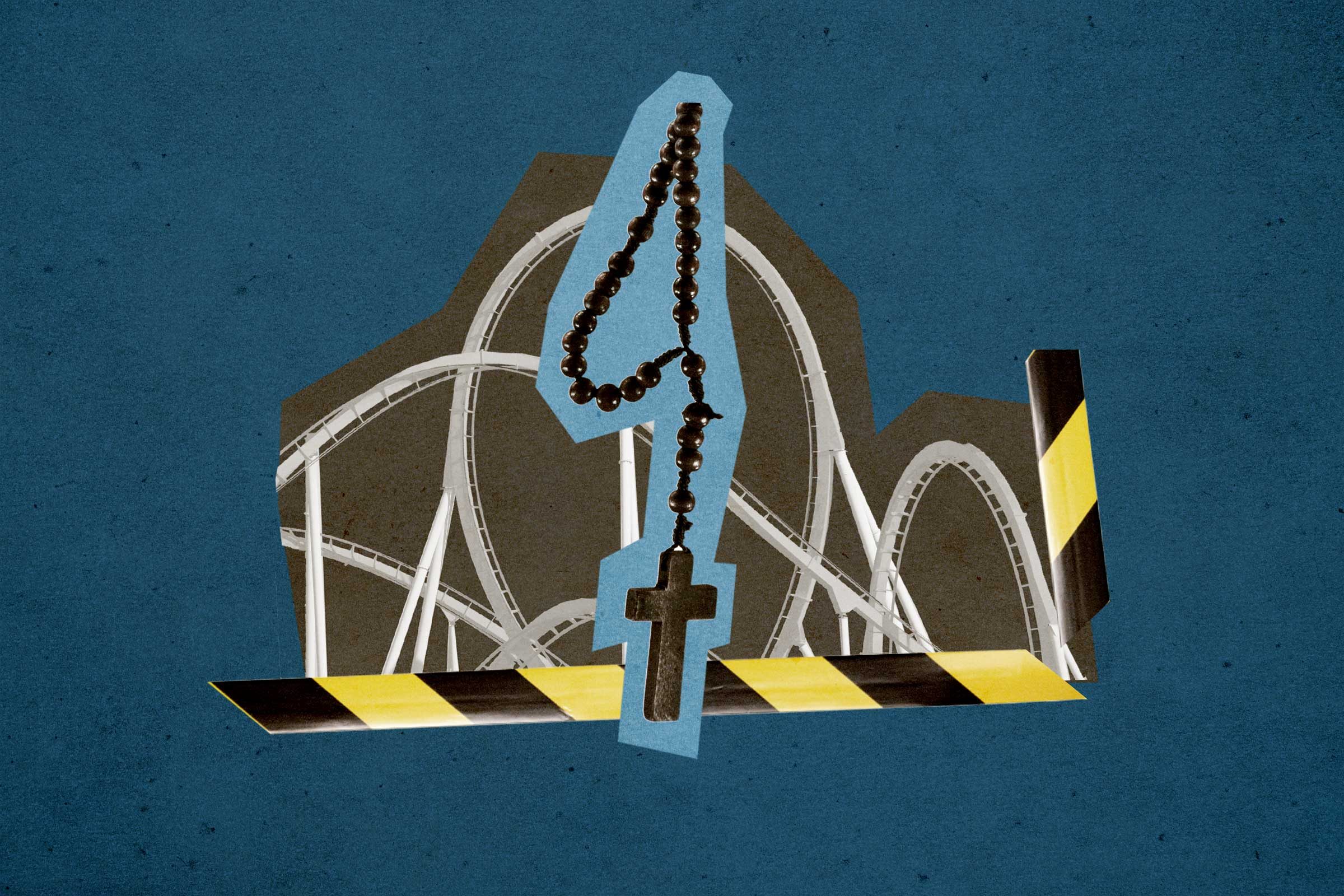 Televangelists Jim and Tammy Faye Bakker were household names in the 1980s, before the couple’s fall from grace. With a legion of fans who tuned in regularly to their show, The Praise the Lord Club, the Bakkers decided to open a theme-park resort with a Christian angle. Built in Fort Mill, South Carolina, Heritage USA enjoyed an 11-year run before Jim Bakker resigned from the empire he had built after his multiple scandals were exposed. The park was actually undergoing a massive expansion when it met its untimely demise, and its relics remain, old and decrepit, in the Southern city, according to the Charlotte Observer. Check out these other abandoned amusement parks that will give you the creeps. 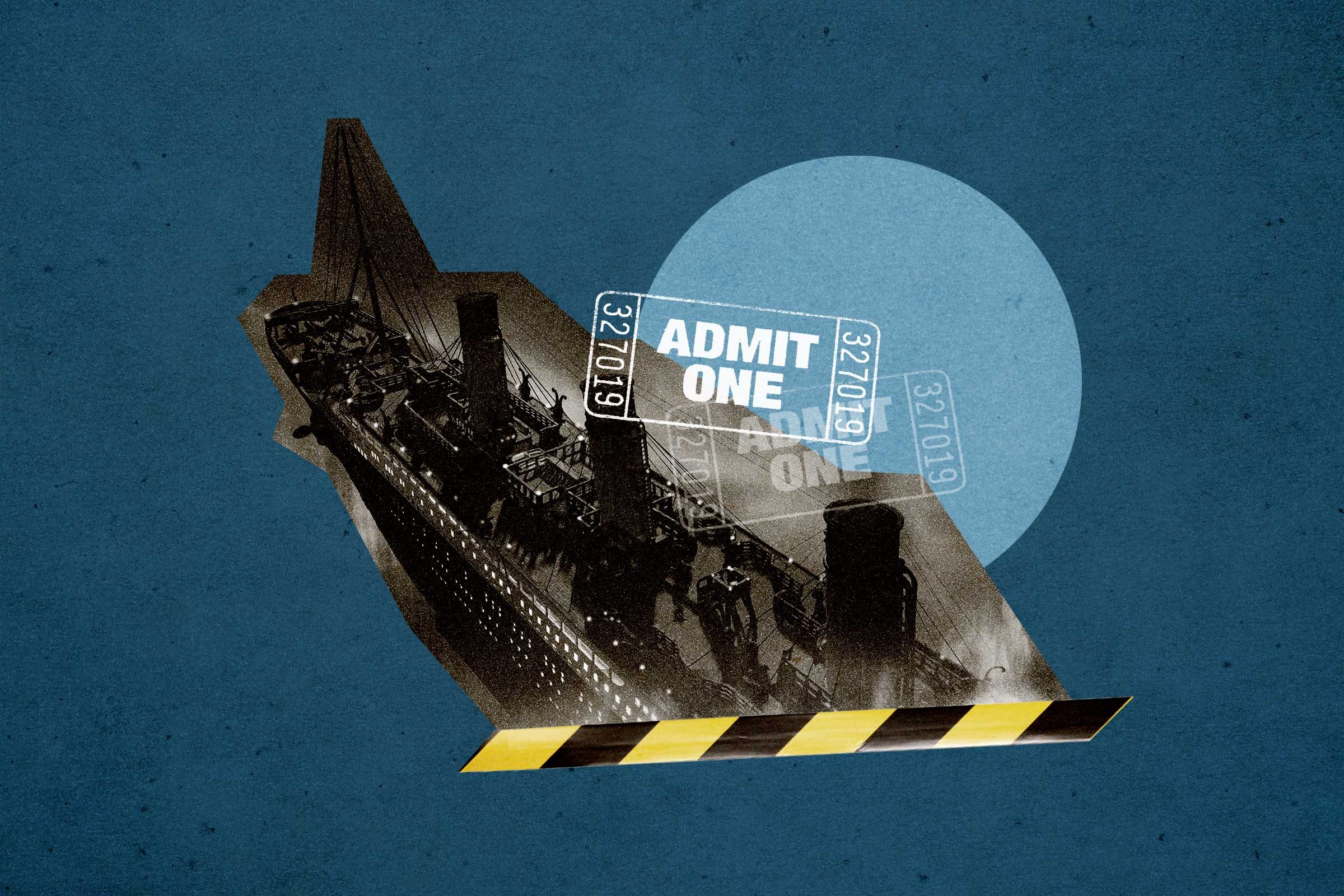 The folks behind the Romandisea Resort, an amusement park in China, are betting big on history buffs’ interest in the Titanic. They’re betting on it so big, in fact, that they’re building a replica of the infamous ship that sunk to the bottom of the Atlantic Ocean during its maiden voyage in 1912. Sure, we’ve seen Titanic exhibits before, but this one initially intended to simulate the iceberg crash experienced by the ocean liner for the theme park’s guests. As you can imagine, there was an uproar, and the British Titanic Society and family members of both survivors and those who perished in the horrendous event spoke out loudly against the plans. After much debate, and a promise on the part of Romandisea that the replica would be respectful and tasteful, plans for the simulation experience were finally shelved. These 13 Titanic mysteries may never be solved. 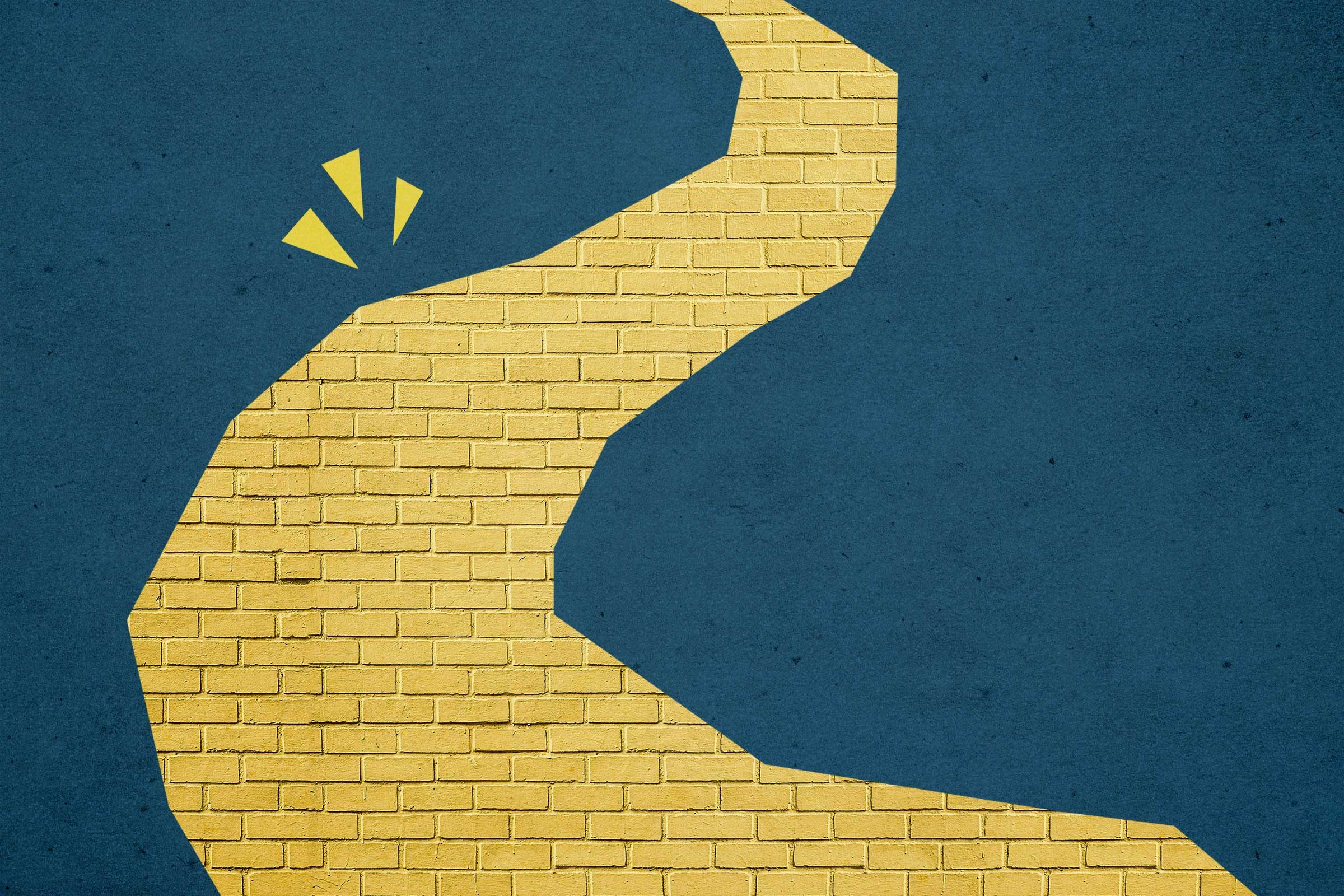 This one is less scandalous and more creepy. North Carolina’s Land of Oz was well-intentioned as a theme park devoted entirely to the wonderful Wizard of Oz. The park, which opened in 1970, spent 10 years in business and actually garnered more attention when, after decades of neglect and disarray, images surfaced in 2015 of the land it occupied. A photographer captured pictures of an ominous-looking, abandoned yellow-brick road and haunting trees with “faces.” According to WRAL.com, the park was reopened in 2017 after revitalization efforts, to offer revelers a chance to see what it was like in its prime. Attractions included a replica of Auntie Em’s house, a witch’s castle, and, of course, a yellow-brick road. Today, the property is available only for private tours and events. Whether you visit or not, check out these 50 incredible facts about The Wizard of Oz. 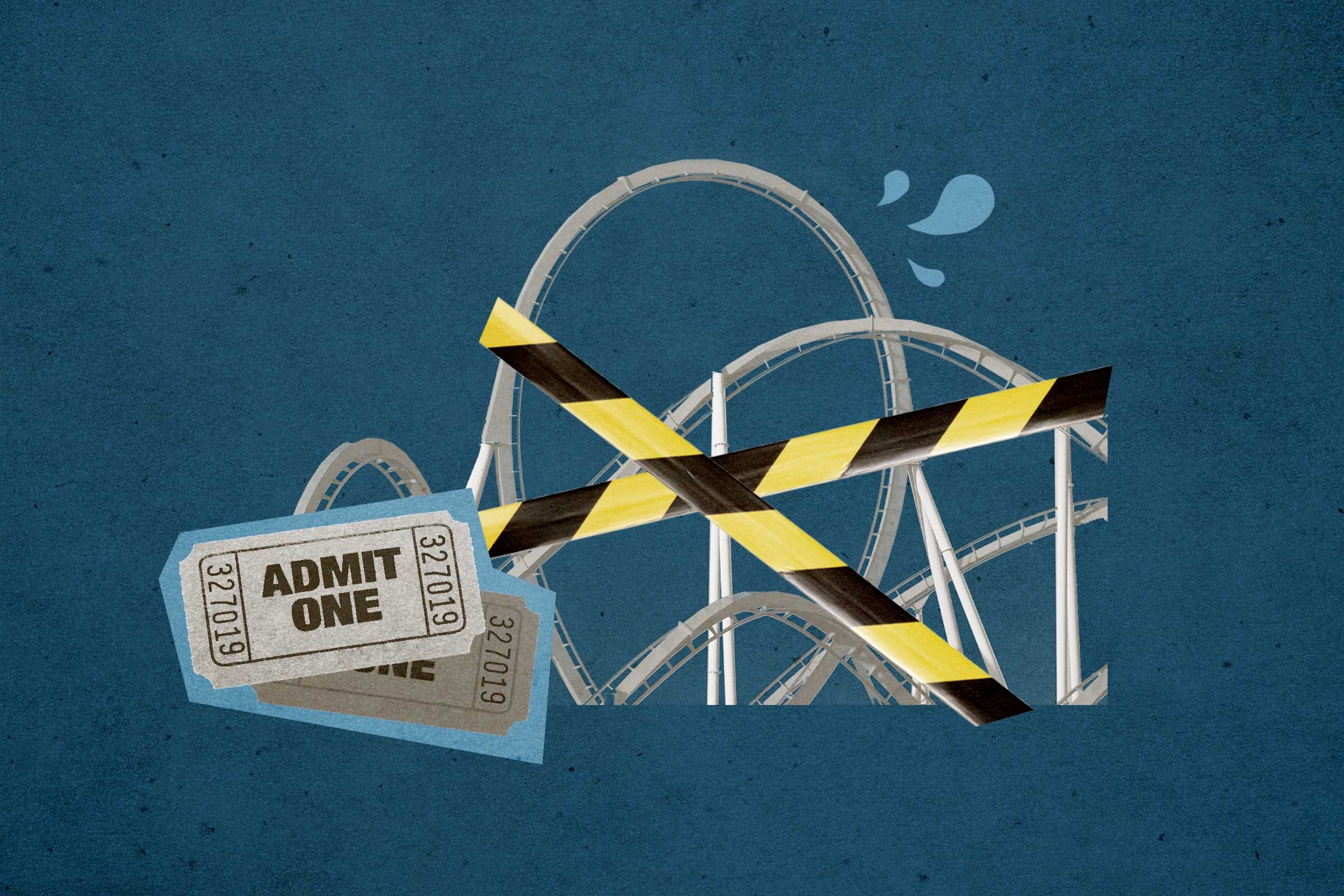 A day of fun turned deadly when a malfunctioning water attraction in Australia’s Dreamworld amusement park killed four people in 2016. The ride, Thunder River Rapids, was white-water-rafting simulator, according to the BBC. When two rafts collided due to the malfunction, one flipped over and its passengers were crushed instantly. After the accident, Dreamworld not only closed the attraction but also completely tore down the structure. The park, located on Queensland’s Gold Coast, was closed for six weeks before reopening to visitors. It’s currently home to thrill rides, animal attractions, and a DreamWorks area featuring children’s favorites like Kung Fu Panda and Madagascar. Though for a very different reason, here are 9 things you won’t see in amusement parks anymore. 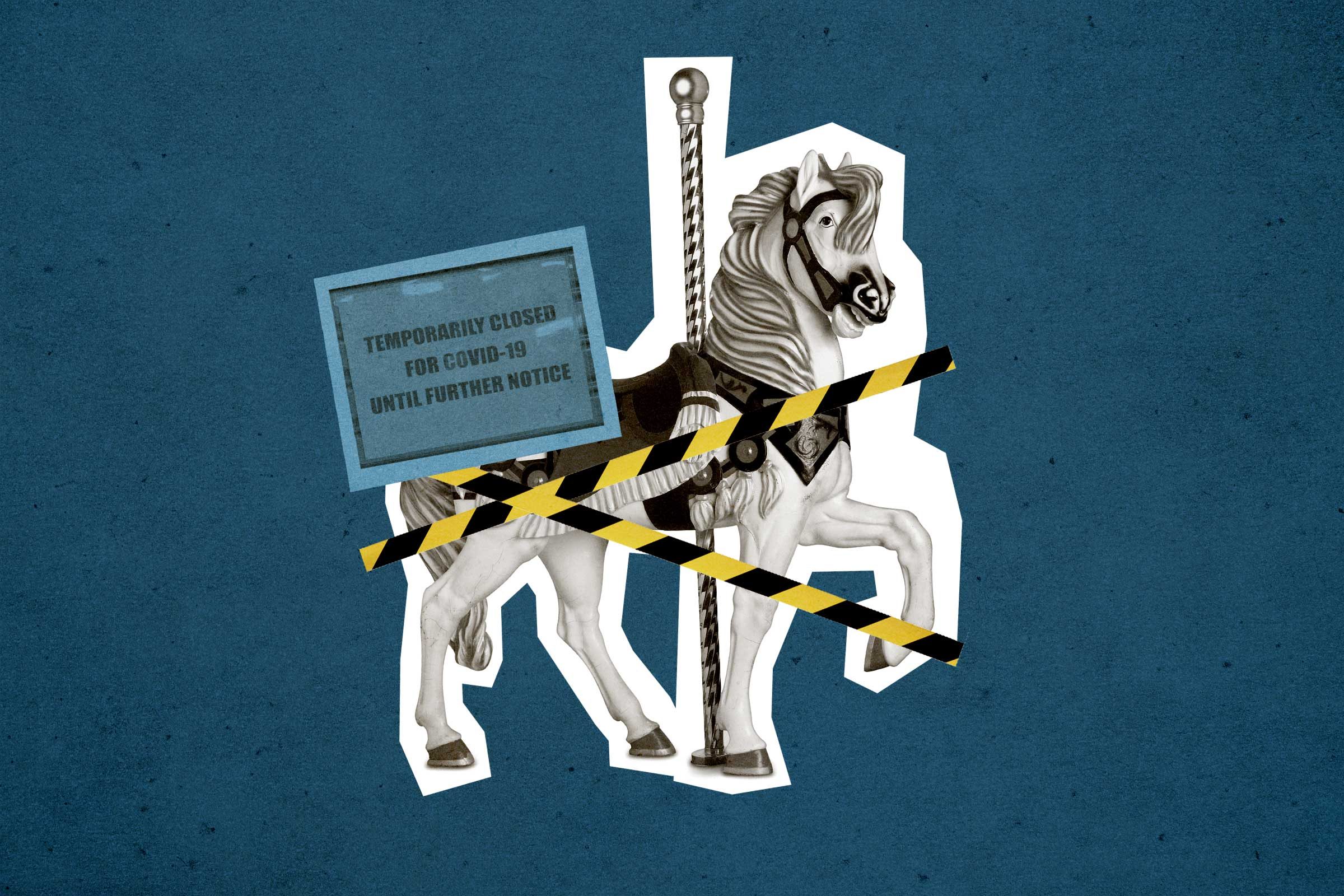 If there’s enough land to play with, successful theme parks are always planning for expansions and updates. Universal Studios Florida was heavily into its plans for a new theme park to join its ranks, Epic Universe, with the ground well-broken before the COVID-19 pandemic hit in 2020. Cinema Blend reports the new attraction was scheduled to open in 2023, boasting the highly anticipated Super Nintendo World, as well as new forays into the Harry Potter universe. However, with companies tightening their financial bootstraps and no one quite sure what the future holds, construction was halted at the property, and no definitive date has been given for it to resume.

Theme park insiders have been speculating whether this disruption will affect Universal’s licensing deals with Nintendo, as well as whether the Harry Potter portions of Epic Universe will be moved to one of the existing parks instead. According to Spectrum News, Universal’s theme-park revenue fell a whopping 94 percent in the second quarter of 2020, due to park closures during the pandemic. Here’s more on how much coronavirus is costing the world (so far). 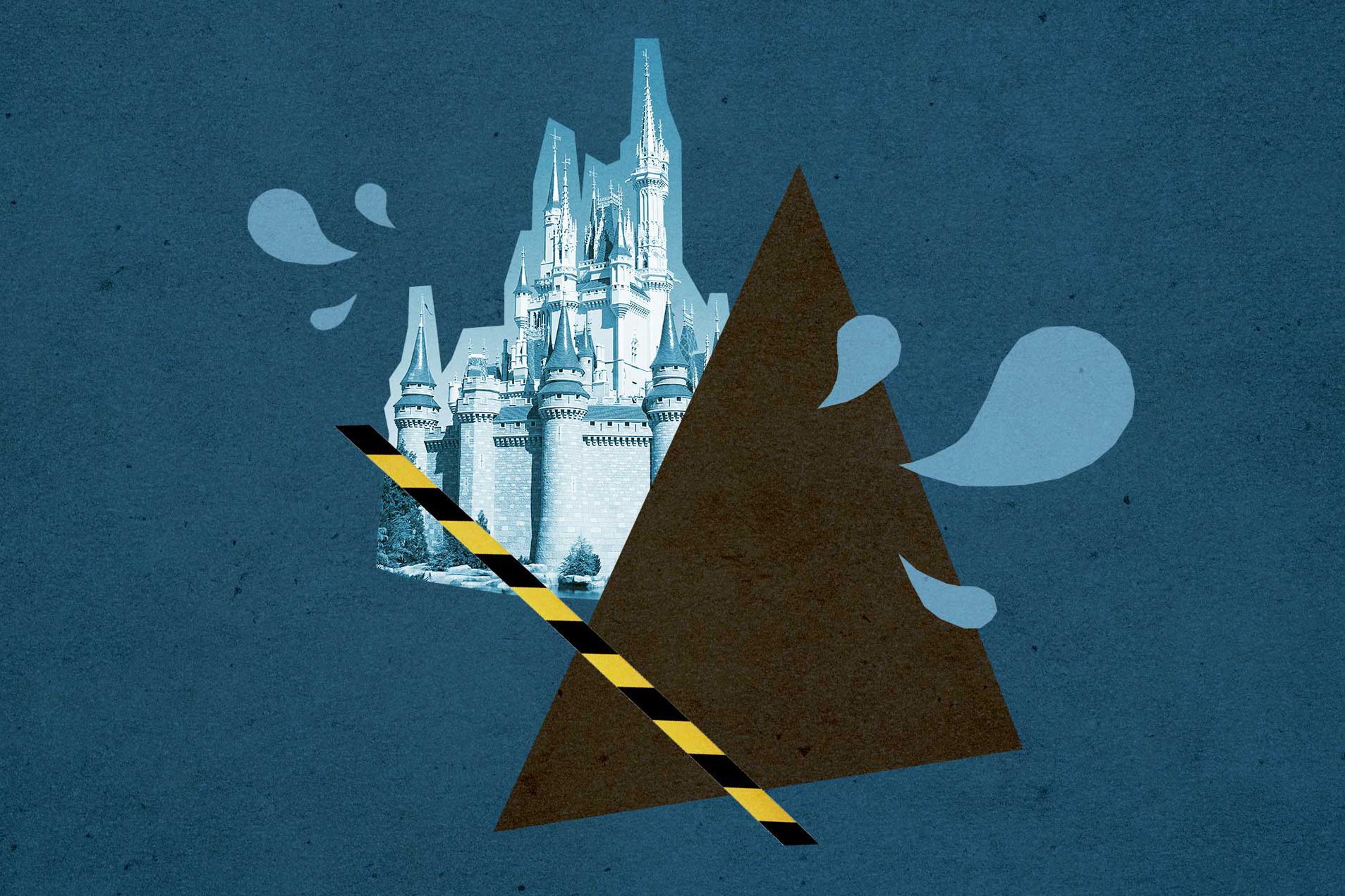 Splash Mountain, a beloved log flume ride in both Disney World and Disneyland, has been the subject of scrutiny for years because it showcases characters from 1941’s controversial animated film Song of the South. The movie has long been criticized for its candy-coating of America’s post–Civil War era and for amplifying racial stereotypes. But 2020 is a year of change, and Splash Mountain is finally getting a long-overdue makeover. While Disney has insisted that these plans have been in the works for a while, it’s impossible to ignore the timing of the June announcement in the midst of the country’s social-justice protests. When the new ride opens, visitors will no longer find Song of the South‘s offensive and antiquated storytelling; instead, they will be in the company of Disney’s first Black princess, Tiana, in this Princess and the Frog–themed attraction.