13 Animal Adoptions That Will Melt Your Heart

Get the hankies ready and the sound the cute alarms: These touching tales of animal friends will hit you right in the "aww" spot. 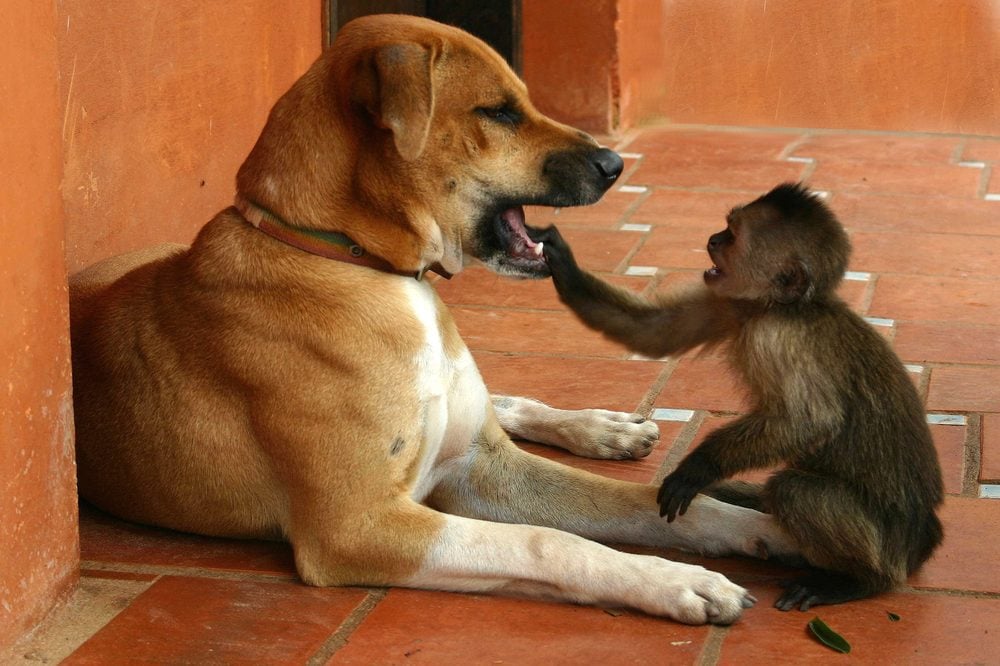 The pooch that’s a bodyguard

When a baby orphaned monkey was severely bullied by other monkeys at a zoo in China, a kindhearted dog named Sai Hu came to his rescue. Whenever the little monkey senses he is in danger, he jumps up onto Sai Hu’s back for protection. Sai Hu chases away anyone who comes against the little monkey; he’s the best bodyguard any creature could ask for. Here’s what you need to know before adopting a rescue dog. 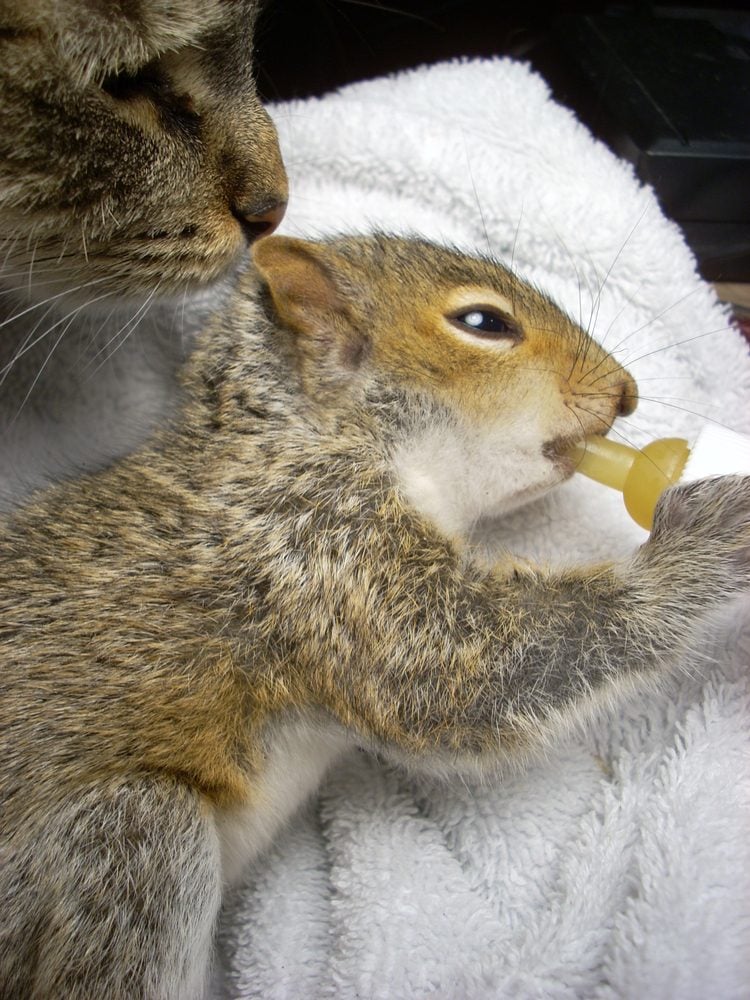 Jim Watkins and his wife Karen devote their lives to saving animals; they helped organize a shelter called T.A.I.L.S. (Taking Animals Into Loving Shelters). Around the time Emmy, a cat they were caring for, gave birth to kittens, they found a squirrel who had fallen out of a tree and was in desperate need of care. According to Jim, when Karen “put the squirrel in the box with the kittens, [Emmy] just immediately accepted it, adopted it, started feeding it; has raised it just like hers.” This tiny squirrel has even started to purr like a kitten! 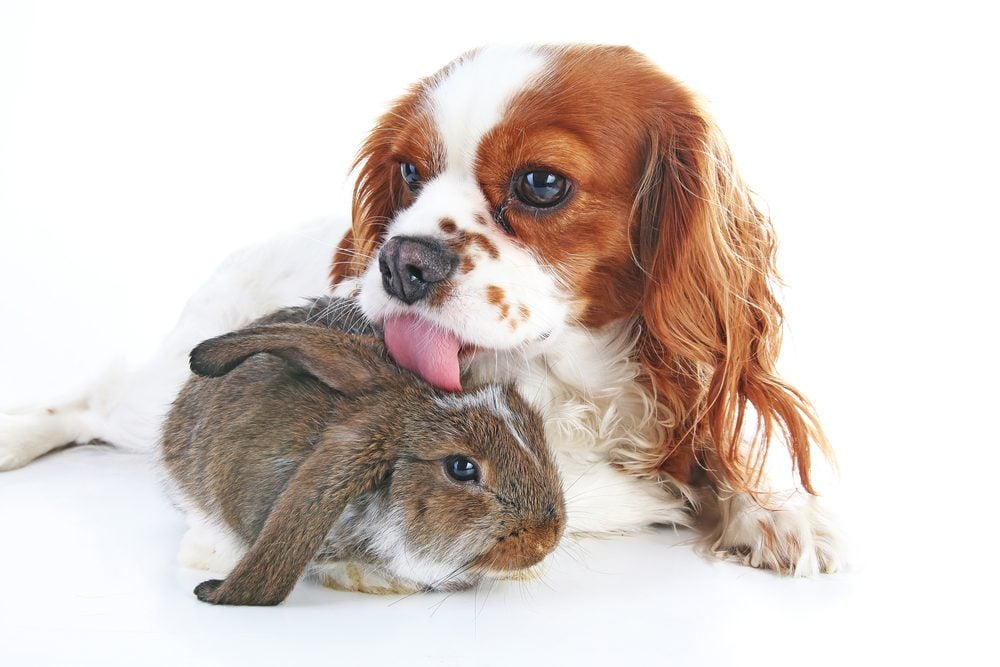 It is highly unusual that a Cavalier King Charles Spaniel, originally bred for hunting small animals, would become a caretaker to orphaned bunnies, but that’s exactly what happened in this instance. Ellie the Cavalier King Charles Spaniel’s maternal instincts kicked in the moment she saw a nest filled with baby bunnies who had just lost their mother; she cuddles, plays, and sleeps with them, keeping them under a watchful eye as though they are her own. 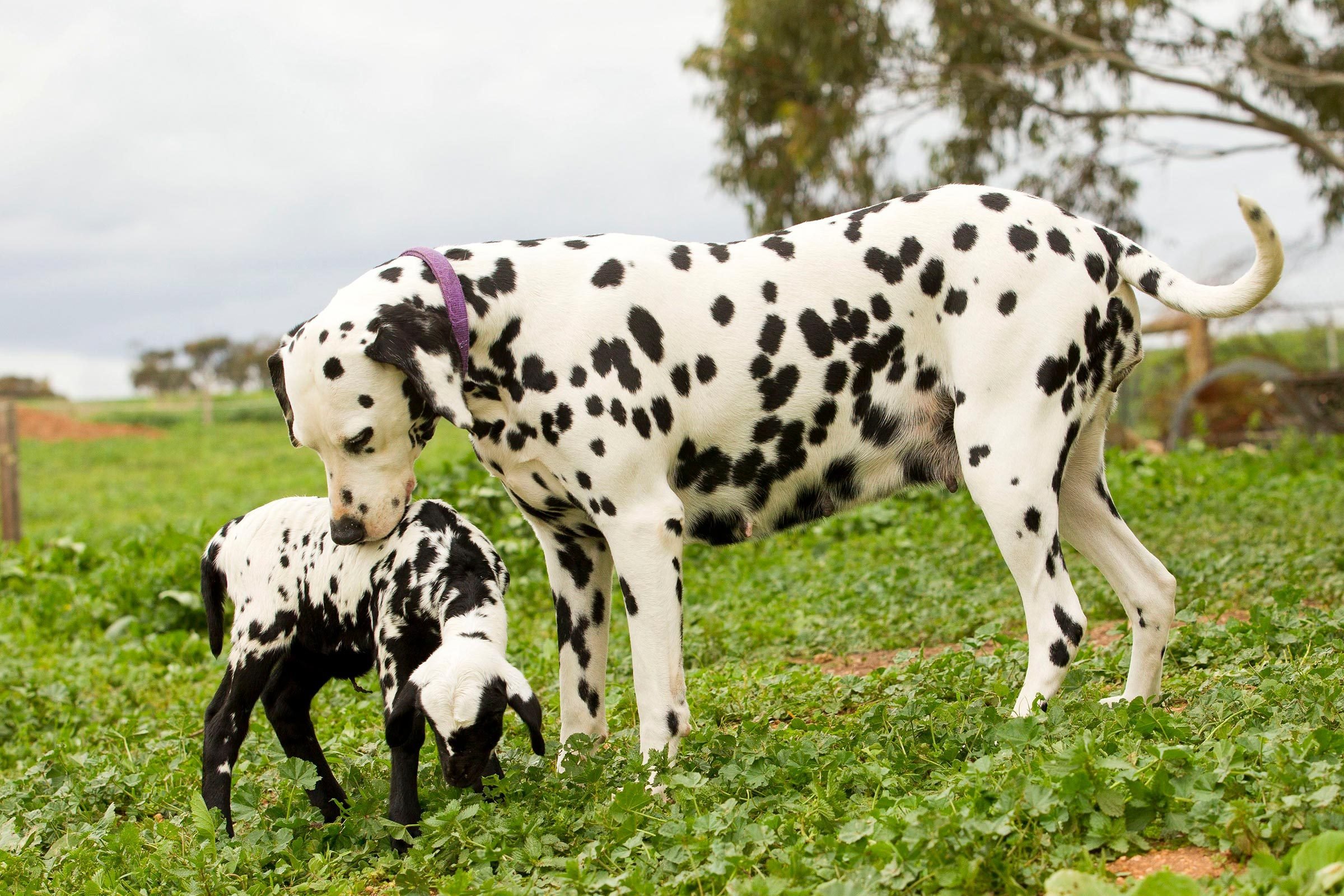 A spotted lamb who was abandoned by his own mother has found comfort and solace in an affectionate, maternal Dalmatian known as Zoe. The young Dorper sheep’s black and white coat is identical to the Dalmatian’s spots, and the pair has been inseparable since their first meeting. Zoe can be seen lovingly licking, nuzzling, and looking out for her adopted baby sheep. John Bolton, a breeder who lives on the farm in Australia that houses Zoe and the sheep, explains, “We’re not quite sure what we should call it, whether to call it a ‘sheep-matian’ or a ‘Dal-dorper!’ These 19 before-and-after dog adoption photos will make your day. 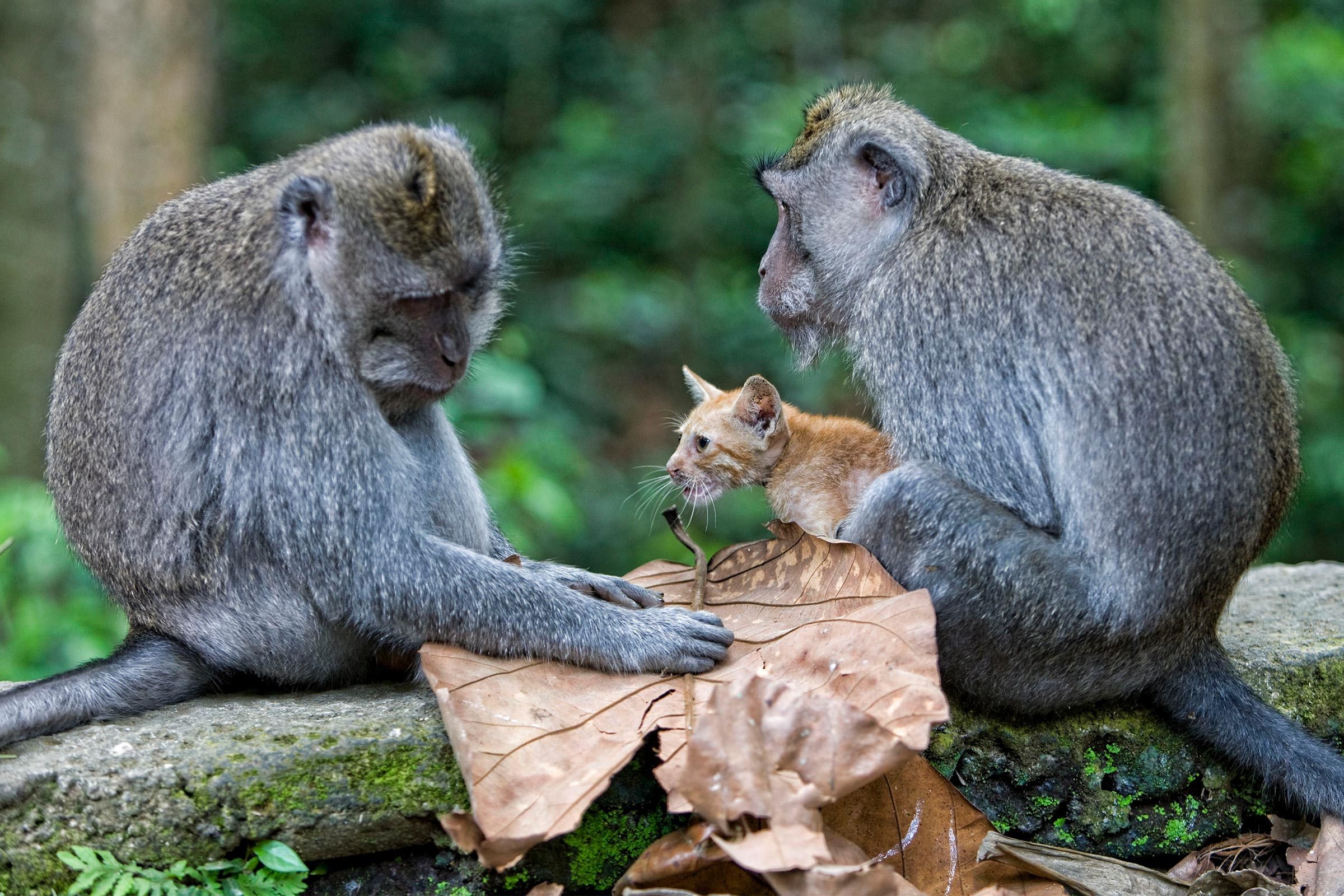 Amateur wildlife photographer Anne Young traveled to Bali, Indonesia to take pictures of the swinging inhabitants of Monkey Forest Park. She did not expect to see the astounding sight of a large monkey carefully cradling a tiny orange stray kitten in his arms while navigating through lush shrubbery. Other monkeys circled around the kitten, known as baby Ginger, as well, happily welcoming him into their primate family. Anne captured photos of the kitten looking delighted to receive so much attention from his new unusual family. 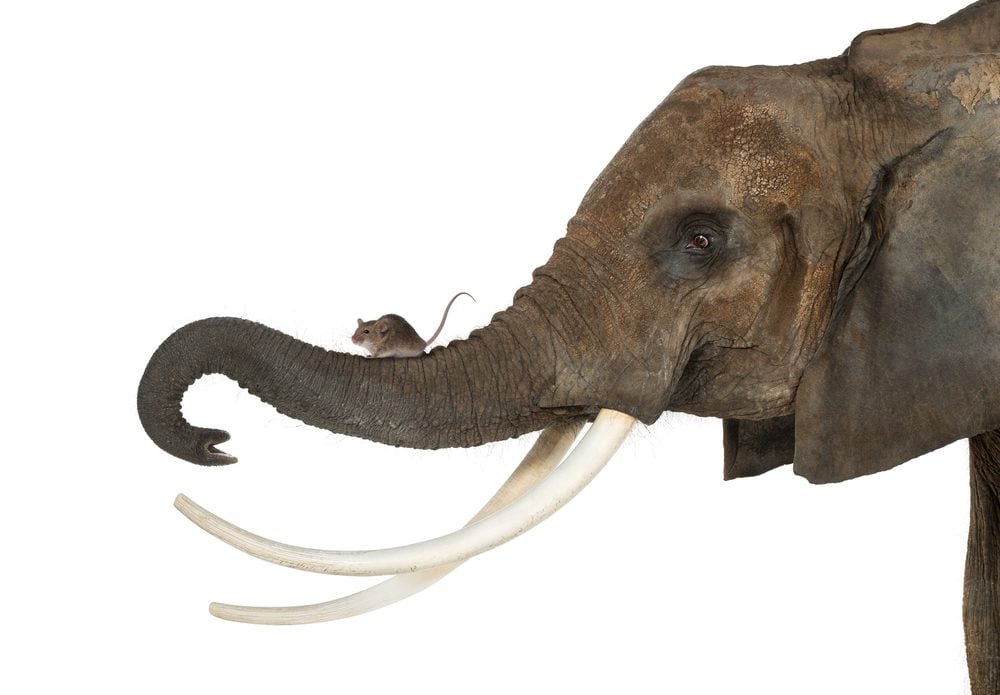 The mouse and the elephant

Thanks to Dumbo, everyone believes that elephants are afraid of mice. (The truth is a little more complicated.) The Elephant Conservation Trust in Nairobi, Kenya rescued a small elephant named Kutania who was abandoned by her herd when she fell into a well. Kutania was so afraid of rejection afterward that she would run away if another elephant didn’t immediately want to engage. One day, the staff tried to shoo a mouse outside and Kutania picked him up, let him rest on her head, and adopted him. According to One Green Planet, “experts at ETC believe the mouse was also orphaned…Perhaps this shared pain is what brought this odd pair together.” Check out these adorable, touching photos of animal friendships. 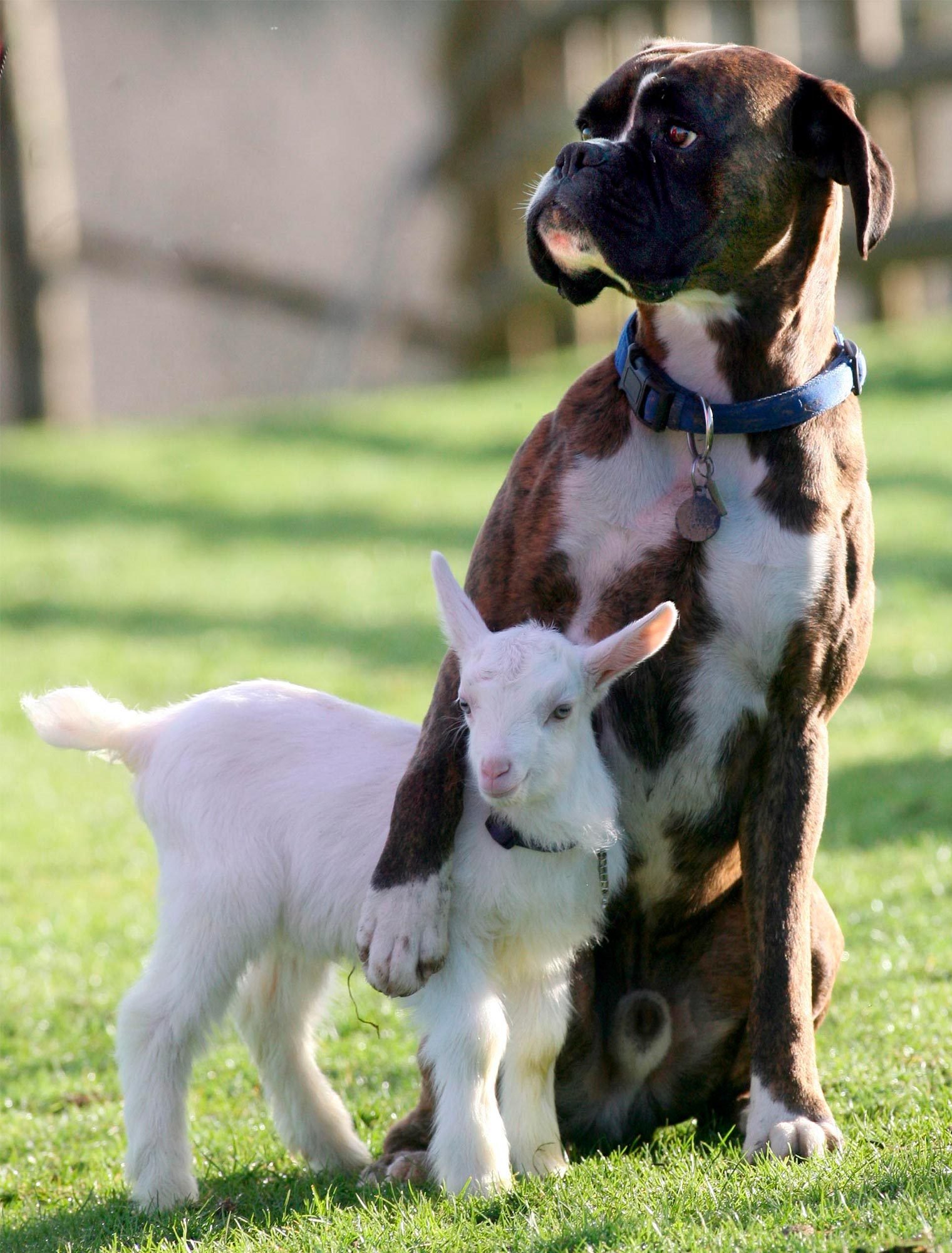 A male boxer dog named Billy has taken on the role of surrogate mother to a baby goat abandoned by her mother right after she was born. Lilly, the baby goat, was too small and delicate for her mother to take care of when she already had two other kids. Billy cleans the baby goat with kisses and never leaves her side. Billy’s owner, Elizabeth Tozer, describes their endearing relationship: “Lilly follows Billy around, which is really quite amusing to watch, and Billy sleeps with the goat and cleans her mouth after she feeds.” This is the power of adoption.

When Ronan and Emma Lally’s duck eggs hatched on their farm in Ireland, the couple spotted their cat, Della, with a baby duckling in her mouth. Afraid that the little duckling would be their cat’s next meal, they were relieved to see that the cat—who had just given birth to her own litter—had adopted the ducklings. The cat even put her paw over them protectively. Discover the 17 things you never knew about your own cat. 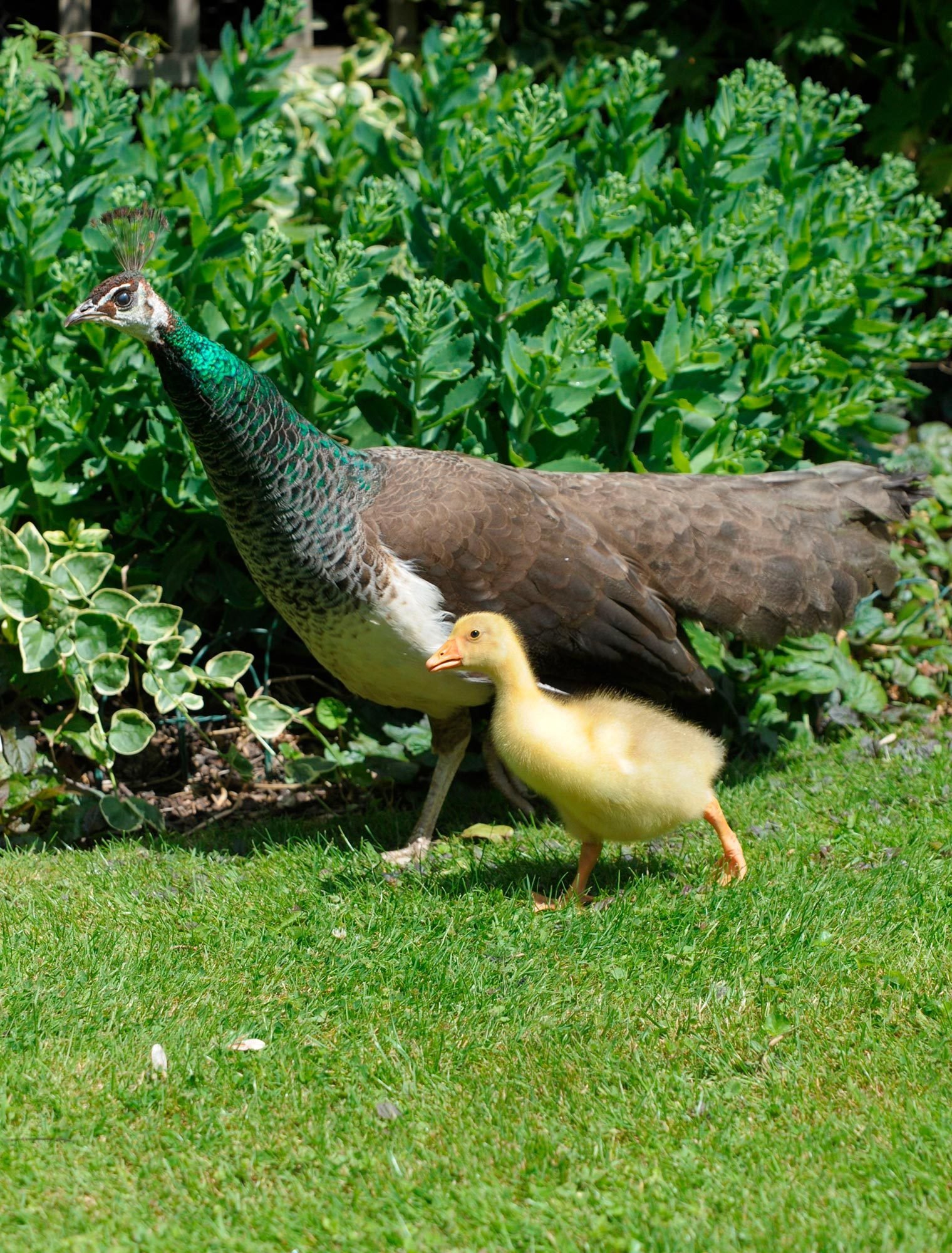 The peacock and the goose

Bed and breakfast owner Caroline Halse received two large goose eggs from friends, according to this story from the book One Big Happy Family by Lisa Rogak. Halse wasn’t sure if the eggs were fertilized, and decided to see if her peacock, Valentine, would sit on them. Sure enough, she did! Thirty-one days later a tiny yellow gosling magically appeared. (The other egg was unfertilized.) Valentine snuggles with her adopted little baby gosling and shows her how to search for bugs and worms in the garden; she even tucks her in at night. 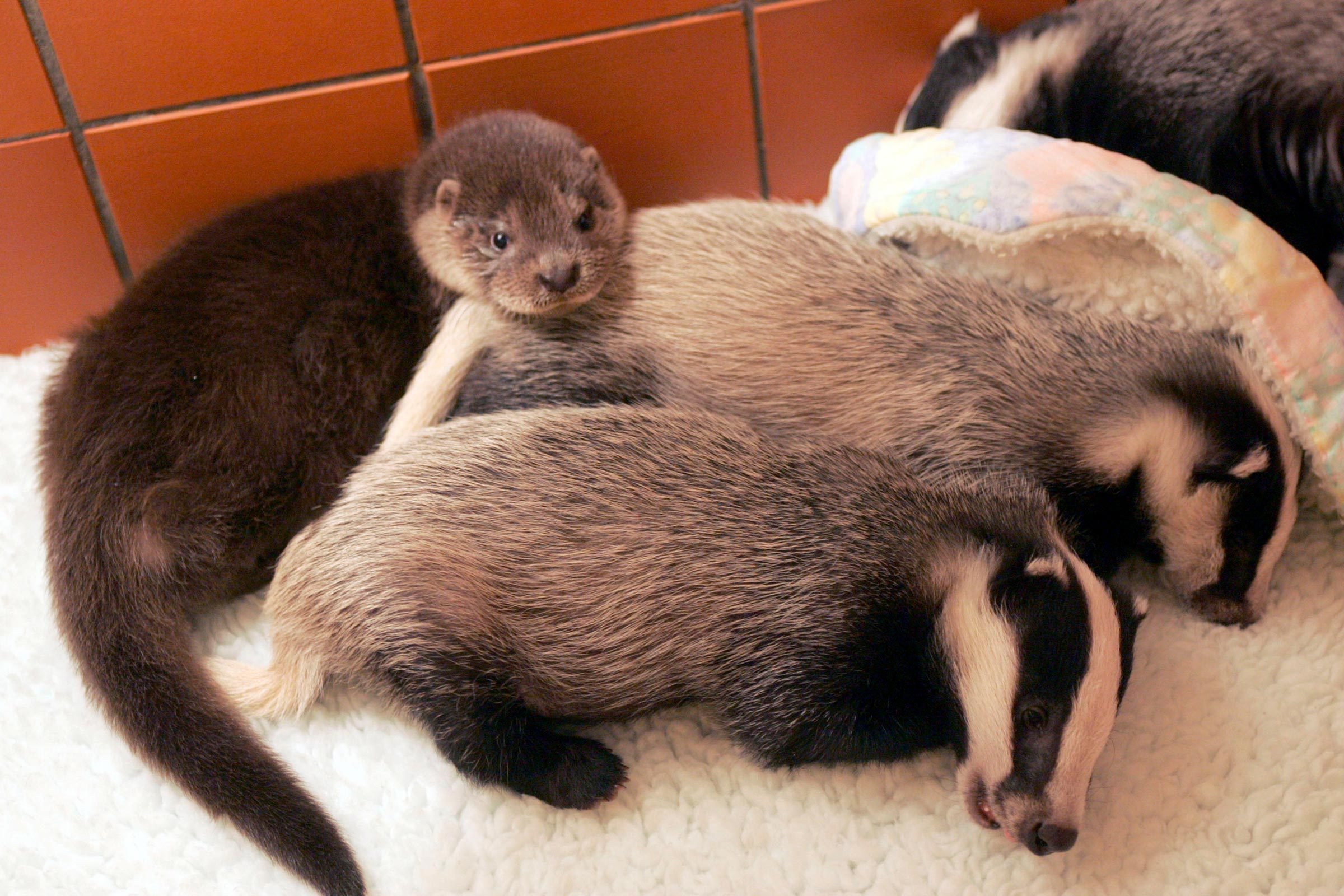 Pauline Kidner, the founder of Secret World Wildlife Rescue in England, took in an otter named Torrent who was found wet and cold lying near his dead sibling. She put him together with three badger cubs who were also saved from perilous circumstances; two of them had almost been killed on a road, and one was completely isolated and left freezing in a field. Torrent and the cubs bonded instantly. He became an honorary cub family member—snuggling, play biting, and sleeping with the badgers. Even though they are different, Pauline explains, “they all seem to understand each other.” Check out these 21 cat adoption photos that will melt your heart. 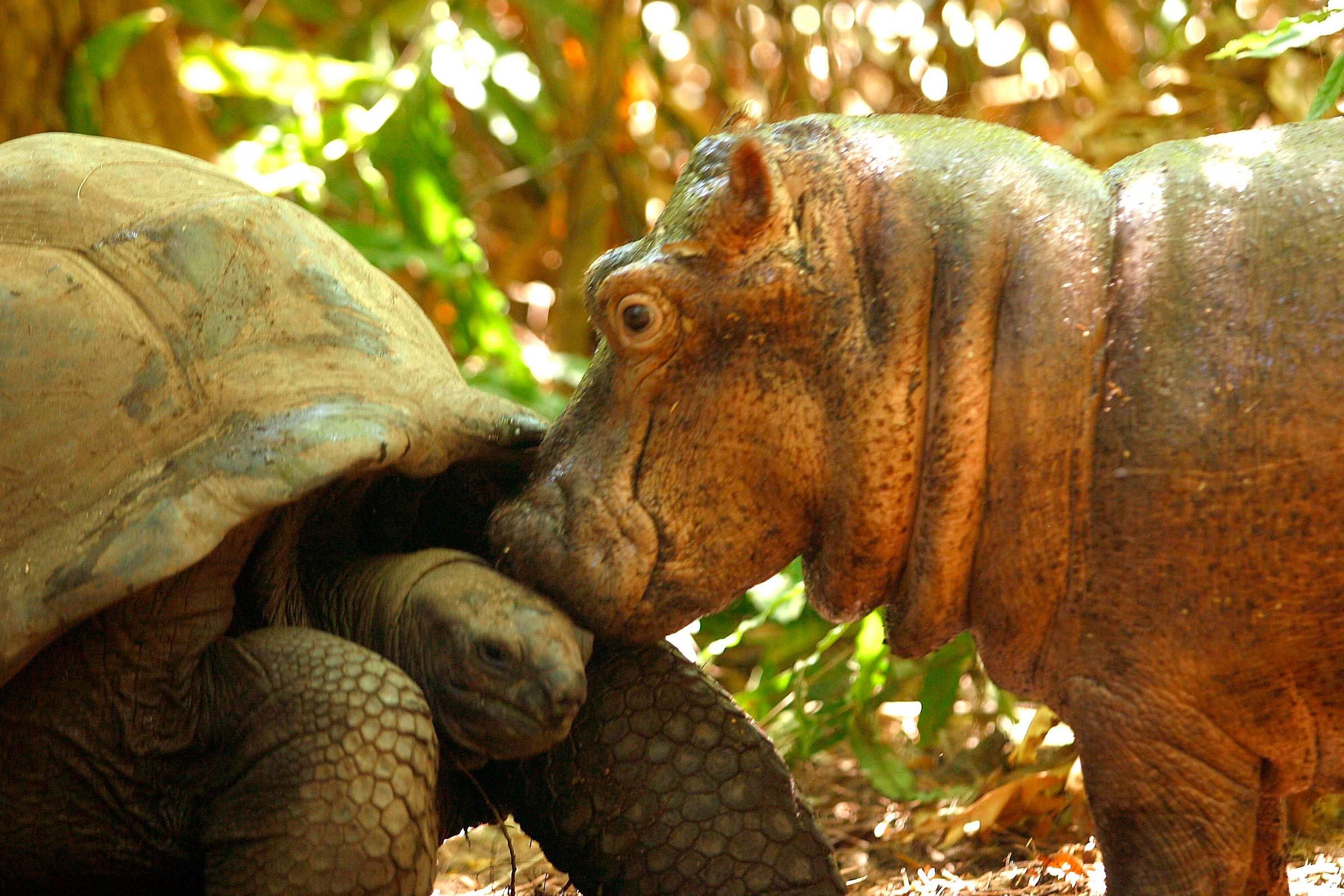 A hippo named Owen was left parentless after the Indian Ocean Tsunami. He was found frightened, stranded, and alone on a reef in the water. His rescuers took him to a nature park in Kenya, where Owen met Mzee, an enormous 130-year-old male Aldabra tortoise; Mzee became his adopted father. Owen clung to Mzee right away, and in return, Mzee cared for him like a son. Learn about 14 of the sweetest pet adoption stories of 2018. 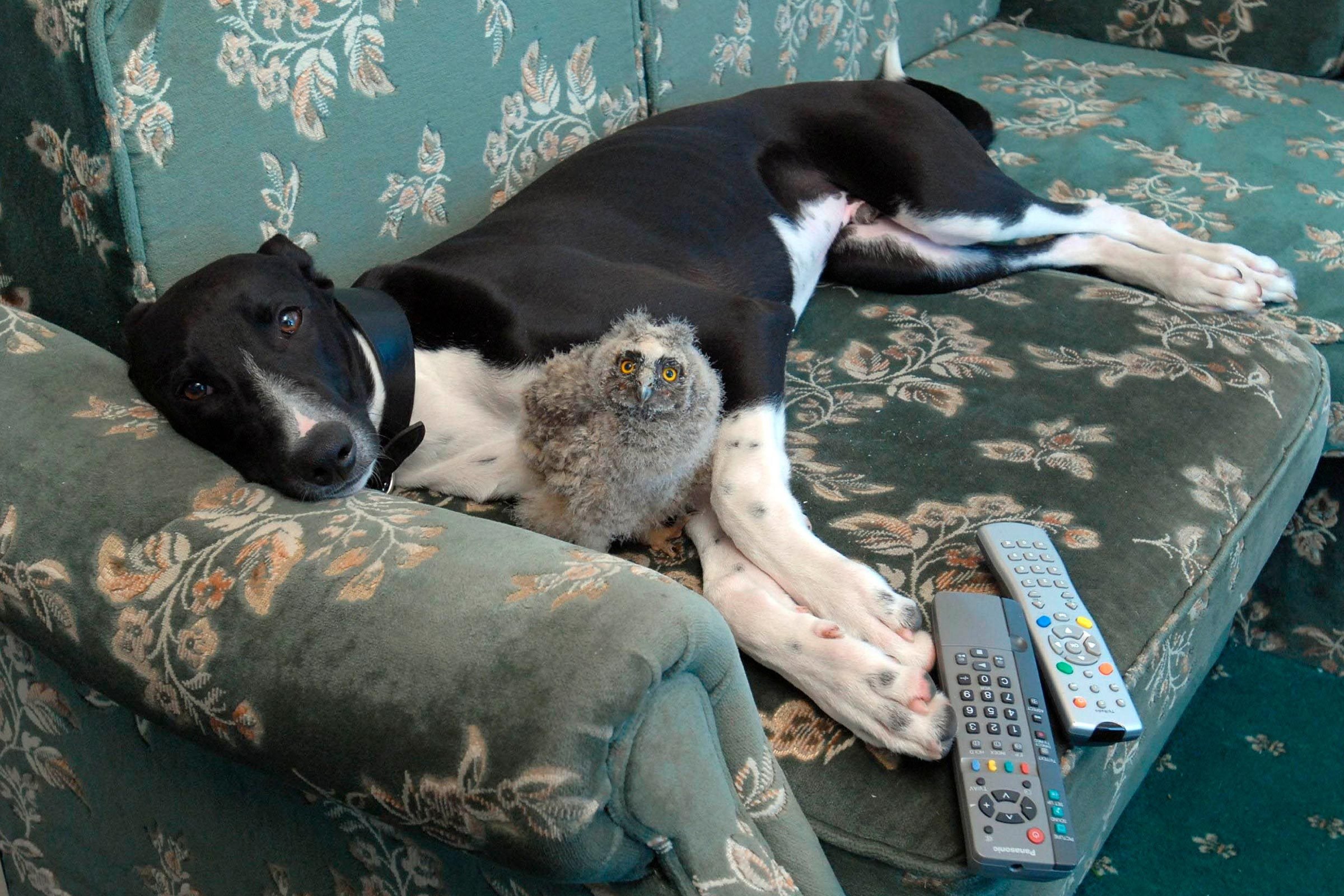 Shrek is a baby owl who was taken from his mother by keepers concerned that she might harm him. Falconer John Picton introduced Shrek to Torque, a six-month-old greyhound, at the Ringwood Raptor and Reptile Center in New Hampshire. They ate together and sniffed each other, and quickly hit it off. Within days, Torque became Shrek’s surrogate father. This unique duo loves playing together and snuggling up on the couch as they watch TV. 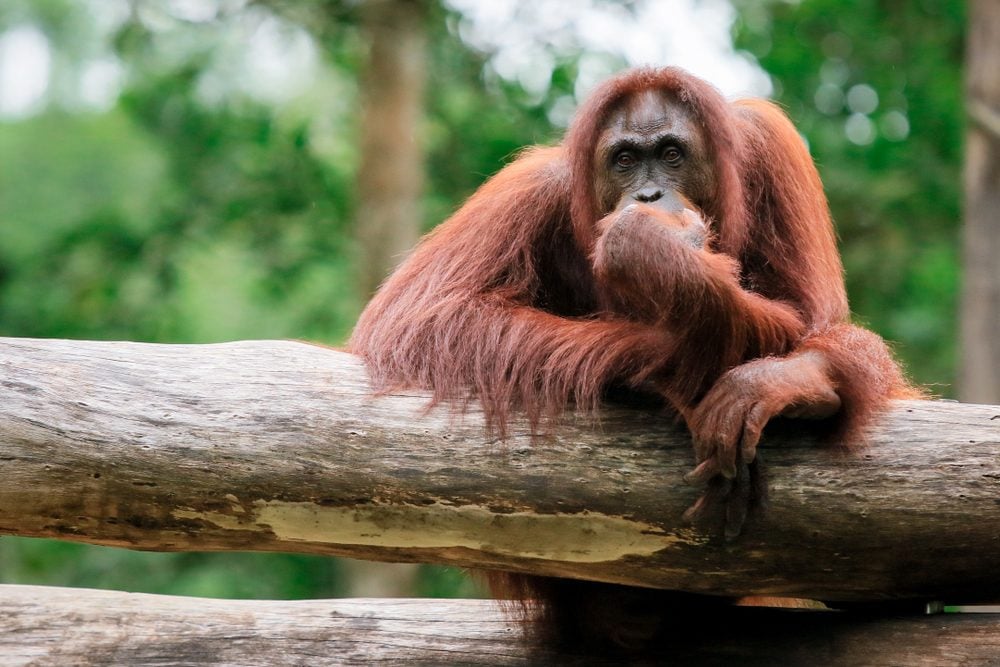 A sweet, extremely loving orangutan at the Myrtle Beach Safari watched human caretakers tend to three tiger cubs, and then became a parent to them himself. He can bottle-feed and watch after these adorable cubs as well as any person can. The heartwarming, affectionate interactions between this orangutan and the baby tigers show how very “human” animals really are. Next, check out these 11 tear-jerking stories of dogs that were rescued. 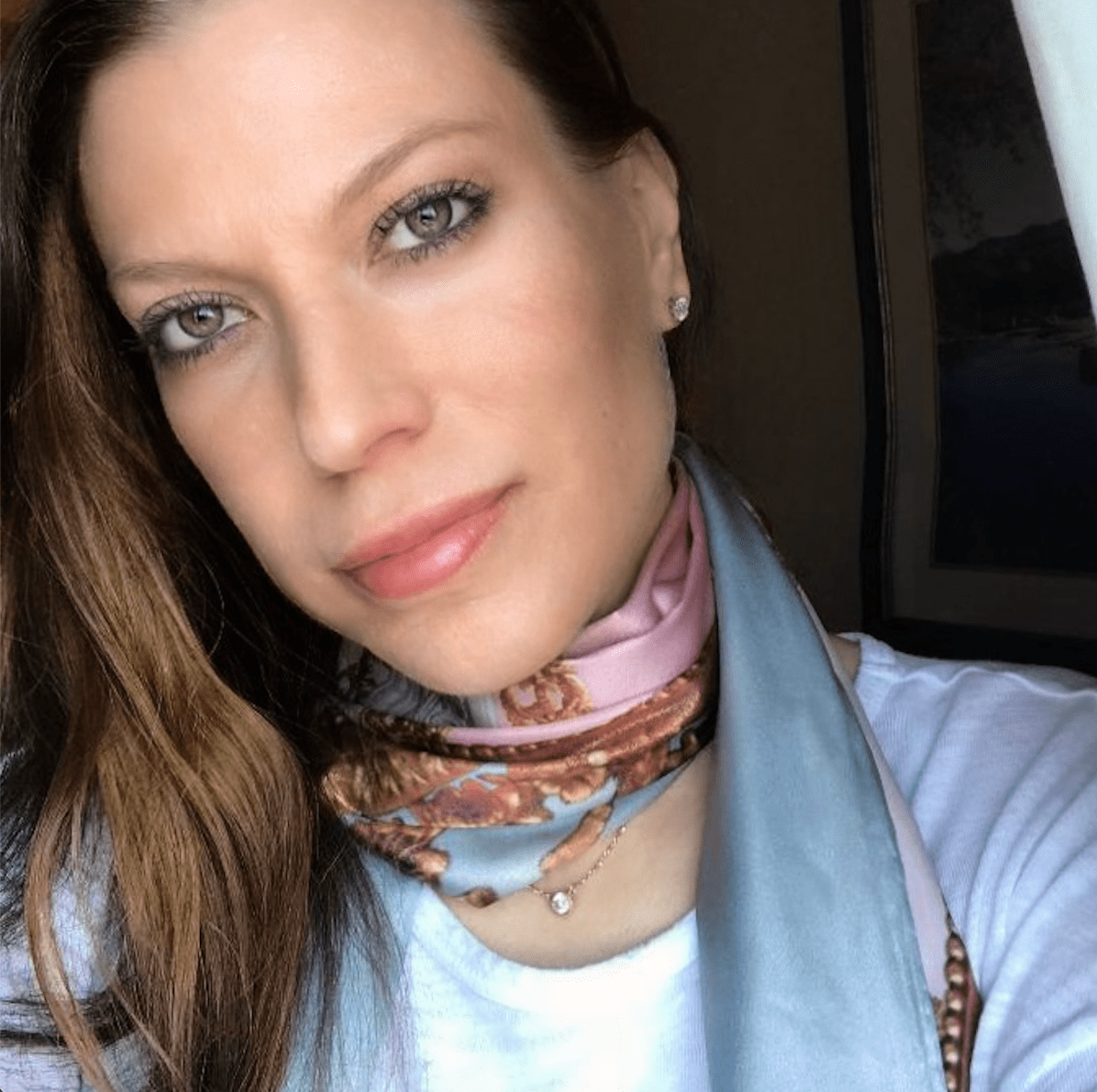 Eve Glover
Eve Glover is an arts and culture/lifestyle writer who has covered psychology, alternative medicine and animals for Reader’s Digest. Her work has also been published in The Jerusalem Post, Israel National News, The Jewish Press, JW Marriott’s in-room travel magazine, JWM Magazine, Hawaiian Airlines’ in-flight magazine, Hana Hou!, Aspen Peak, Boston Common, Beverly Hills Magazine and Luxury Lifestyle Magazine, among other publications. A great passion of hers is music, and as a lyricist, she has collaborated on songs with Grammy, Emmy and hit music producers. Eve earned her BA in psychology from Boston University.