Some of these exceptional creatures are cuddly, some are courageous, but all share an extraordinary spirit. 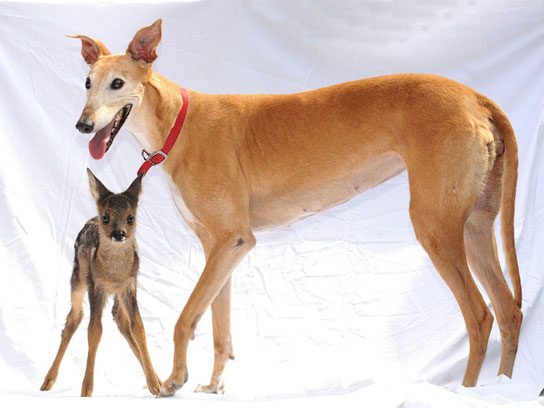 Jasmine had a rocky beginning. At about three years old, she was found abandoned in a shed in Warwickshire, England. Flea-ridden, lethargic, and in poor health, she was brought to a local wildfire sanctuary, where she cowered whenever owner Geoff Grewcock approached her. But then a miracle happened. Within a few months, Jasmine blossomed into the sanctuary’s ambassador. As Grewcock says in the book Unlikely Heroes, “First thing in the morning, she’d go around to each cage and make sure everyone was all right.” Jasmine instinctively knew how to be with animals of all species and in all conditions, letting spring chicks sit on her nose and back or strolling around with the foxes. With the injured and frightened, Jasmine would sit next to them and nuzzle—even rousing from a coma a baby deer named Bramble (shown). 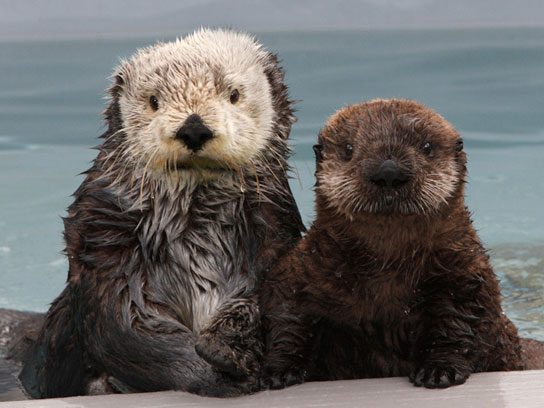 California’s Monterey Bay Aquarium scientists have worked to rehabilitate orphaned sea otters for decades, raising the young pups and teaching them to dive and catch seafood with mixed success. One day, out of desperation, they placed a two-week old otter with Joy, a female who had been abandoned herself as a pup, and who’d recently had a stillborn birth. To their delight, she readily accepted him and reared him until he was ready to be released. Joy turned out to be natural mom, and helped raised more than 20 orphaned pups, with 12 of them making smooth transitions to the wild (and of those, four have raised their own babies). 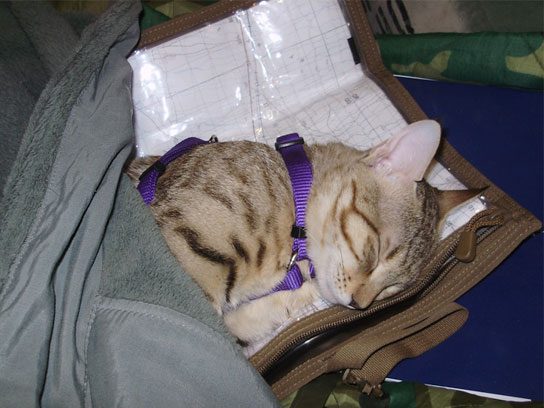 In 2010, Jesse Knott was stationed near a town called Maywan in Afghanistan. There were numerous stray cats around, and he developed a friendship with a green-eyed tiger kitten that he called Koshka, which means kitty in Russian. In December of that year, Knott suffered a devastating loss when two of his friends were killed by a suicide bomber, and he decided he would end his life, too. That day, Koshka was determined not to leave Knott alone. He kept head-bonking the soldier, and he curled up in the man’s lap, purring and patting his friend’s face with his paw. “He saved my life that night,” Knott says in Unlikely Heroes. “I have no doubt about that. And after that, it became my mission to get him out of that country no matter what.” Knott was able to find an Afghan animal-rescue group that transported the kitten to his parents in Oregon, where Koshka enjoys visits from Knott. 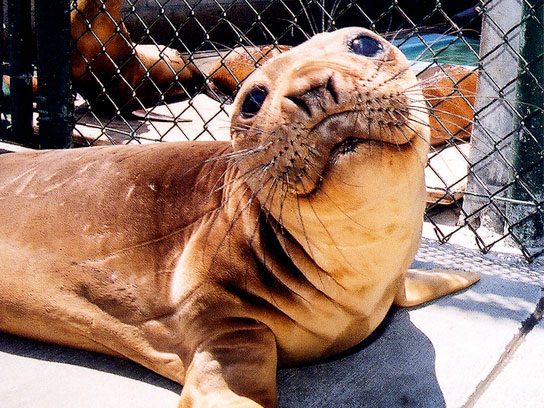 In 1994, a elephant seal named Gimpy was brought to the Marine Mammal Care Center in San Pedro, California, a nonprofit sanctuary (shown here, not long after she arrived). She’d suffered head trauma that had left her partially blind, and one side was paralyzed. Hugh Ryno, a volunteer, would show up to feed Gimpy and clean her pen. Because she was uncoordinated at first, he’d help her get in and out of her pool. Ryno was struck by her unusually gentle nature; even though they are sweet-faced, full-grown elephant seals can weigh up to 4,000 pounds and possess dagger-sharp teeth, which they use when competing with other seals, or defending their territories or young. “She’d … lie there blowing bubbles and I’d have one-way conversations with her,” he says about Gimpy in the book Unlikely Heroes. Soon, she would re-pay him for his kindness: When Ryno was feeding her and the other young seals, he slipped on a sardine and fell. Three angry young male seals began hurrying towards him; the board which he carried for protection had fallen out of reach. Suddenly, much to his surprise, Gimpy jumped in between them, and Ryno was able to get away from the attackers. Still, the males persisted, so she gave them the elephant seal “no go” sign: an open-mouthed display of her teeth, accompanied by her head bobbing up and down. They backed off, in large part because she weighed 300 pounds to their 100 pounds each. Ryno marvels at her behavior in a crisis, because he knew that her fierce expression, he says, was “all a facade. She’s a gentle giant!” 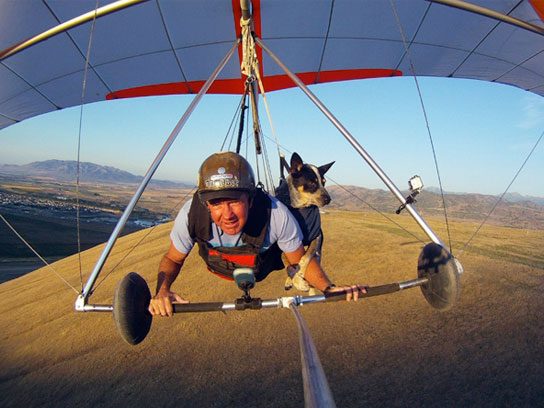 Dan McManus suffered anxiety, ADD, night terrors, and panic attacks for years, and was eventually diagnosed with bipolar disorder. However, McManus found that two things kept him calm: hang-gliding, and his therapy dog, Shadow, whom he met in 2003. Shadow, an Australian cattle dog, uncannily knows when McManus is about to have intense terrors or an anxiety attack—and the animal will jump close to his human and comfort him. After Shadow came into McManus’s life, the two went everywhere together, except when McManus would go hang-gliding. However, Shadow seemed very interested in going air-borne. The pooch, McManus says in Unlikely Heroes, would “be there as I was launching, chasing me and nipping at my heels.” So the Utah man built Shadow a heavy-duty harness, and the first time McManus took his dog up, Shadow—who rides with his front legs around his human—was “like a kid in a carnival,” he says. Today McManus owns a hang-gliding business, and Shadow remains his most loyal customer. 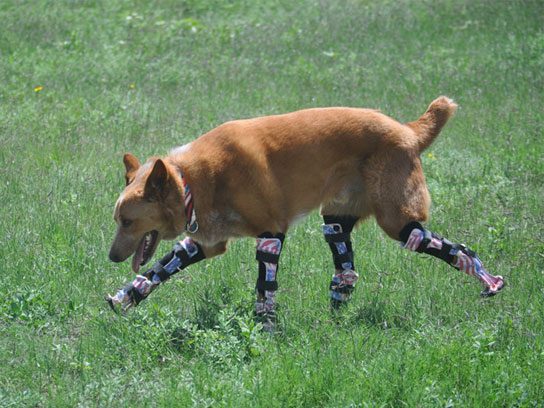 In 2010, rescuers entered an abandoned, foreclosed home in Nebraska and discovered a mother dog and her babies in the frigid basement. The mother had passed away, but her puppies were alive, although one of them had severe frostbite from having four paws encased in a frozen puddle of water. His four feet had to be amputated—and he lose the end of his tail, and part of his nose and ear—but to his rescuers’ surprise, this pup was able to bound around on his stumps, licking and loving everyone he met. Veterinary technician Christie Pace read about him on a rescue website, and she adopted the personable pup, naming him Naki’o, which means puddle in Hawaiian. As Naki’o grew to weigh 50 pounds, however, he became impaired by his injuries. Pace had to carry him up and down steps and in and out of her car; he could walk only on grass. She came across OrthoPets, a company that manufactured prosthetics for animals, and she was able to raise $1,000 to pay for one prosthetic to be used on the worst of Naki’o’s legs. OrthoPets generously donated the other three legs, and Naki’o mastered wearing them in no time. The sweet hound has inspired Pace to start Naki’o’s Underdog Rescue, an organization that finds caring homes for disabled dogs and cats. 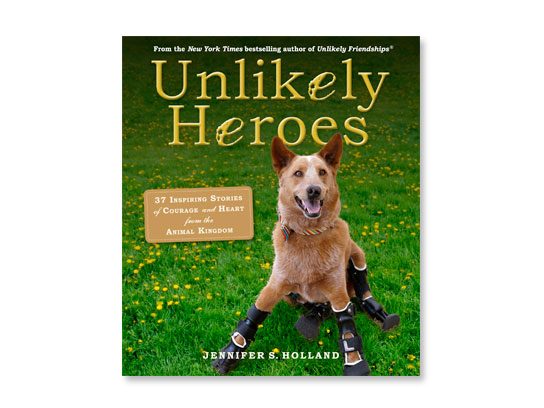 To learn more about these stories and to read about 31 other remarkable animals, check out the book Unlikely Heroes: 37 Inspiring Stories of Courage and Heart from the Animal Kingdom. It contains tales of a Noah’s Ark worth of characters, including a parrot, dolphins, a hippo, two gorillas, an elk, a cow, a camel, a goat, and even some rats.