Reader's Digest completed its mission to show you what to expect when riding Disney's newest Star Wars'-themed attraction, The Rise of the Resistance. Consider this your warning for spoilers.

“Welcome to the cause”

Disney has pulled off the greatest Jedi mind trick ever with the groundbreaking Rise of the Resistance, which recently opened in Star Wars: Galaxy’s Edge at Walt Disney World Resort in Orlando, Florida and at Disneyland in Anaheim, California. The intergalactic ride has been in development for the past four years and is being touted as Disney’s most ambitious and technologically advanced attraction ever. It’s an immersive theater that pushes the limits. “There were lots of hurdles to overcome,” Disney Imagineer John Larena explains to Reader’s Digest. “One of the biggest challenges was getting the pacing right and moving people and technology and music seamlessly without any interruptions.” These are all the best Disney attractions for Star Wars fans.

This ride is fulfilling the dreams of Star Wars fans across the galaxy. The plot takes place on Galaxy’s Edge, where riders are recruited and thrust directly into the middle of a laser shootout between the Resistance and the First Order, led by the hot-tempered lightsaber-wielding Kylo Ren. The typical Disney attraction starts with telling a good story, but what’s different about Rise of the Resistance is that it also makes the rider a part of the tale. The rider becomes a character in a Star Wars movie, charged with a mission. These Star Wars quotes are pearls of movie history every fan should know.

Disney literally threw out the rule book when making this attraction. Think: advanced ride mechanics, holograms, cutting-edge technology, and storytelling. New multiple ride systems were created specifically for this experience, including one that gives the sensation of falling deep from space before crash landing to safety. The Imagineers also used a trackless ride that can go in any direction at any given time. Thousands of special effects were created just for this ride including whizzing blaster bolts, exploding walls, and massive star fields. Find out the 12 best vacations for Star Wars fans.

You’ll see something new each time you ride

Keep an eye out for the many storylines happening throughout the 360-degree experience, Larena says, as you might catch details on your second or third ride that you missed on your first, especially the way the ships move. “There’s a very specific way X Wings move through space versus I-TS’s and keeping that authentic is important,” Larena says. Disney felt the pressure to get all of the details perfect right down to the different sounds of the ships. “Lifelong Star Wars fans can sniff it out right away, so it’s very important to get it all right,” he says. 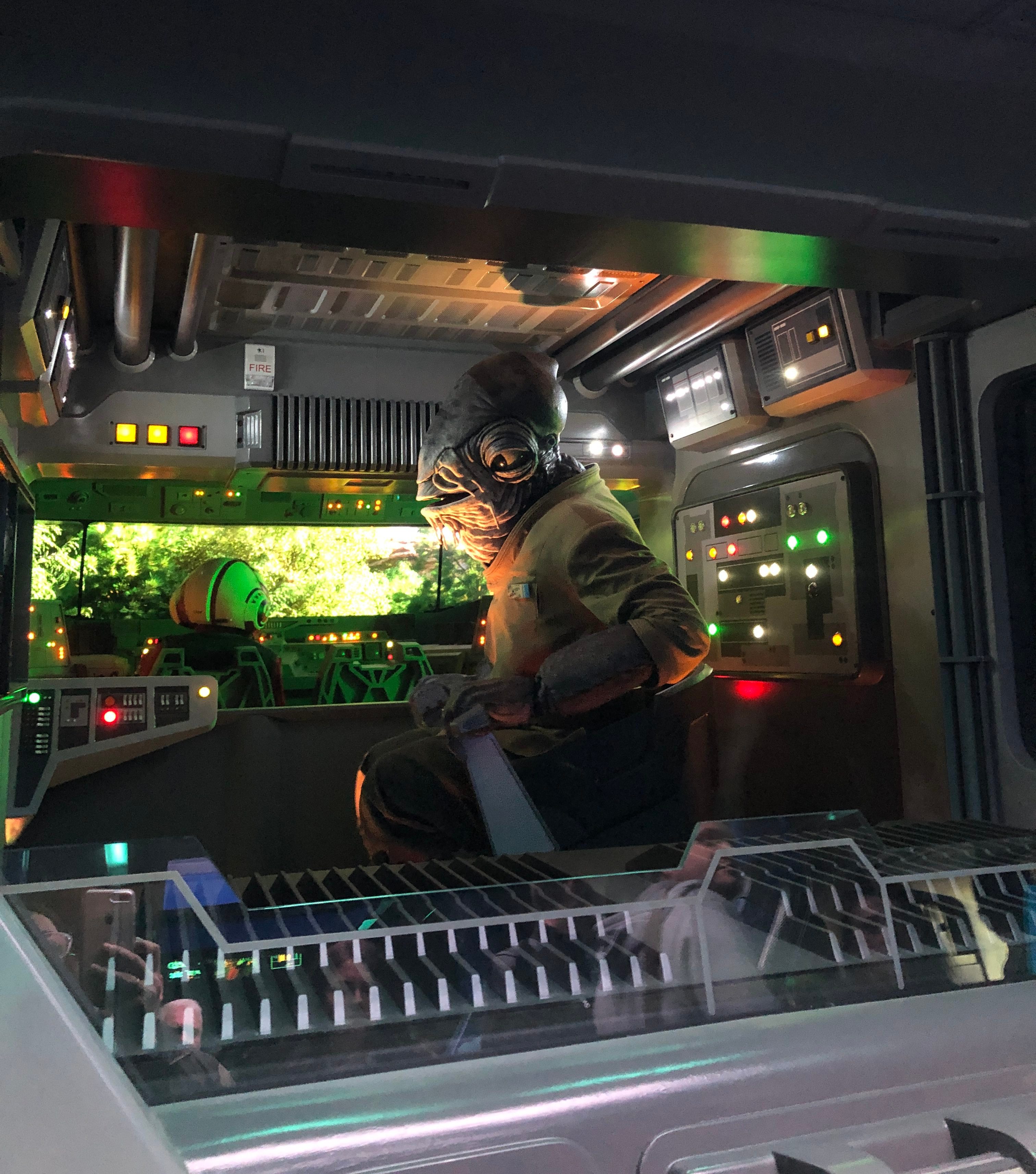 You will see actors from the film throughout the attraction

Imagineers worked alongside the writers at Lucas films making sure the characters and the storylines were on point in the attraction’s scripts. The adorable BB-8 makes an appearance as well as other actors from the Star Wars trilogy, including Daisy Ridley as Rey, Adam Driver as Kylo Ren, and John Boyega as Finn. The actors shot scenes and recorded audio for the attraction while filming The Last Jedi and The Rise of the Skywalker. A new character is also introduced just for the attraction: Lieutenant Bek, a part squid/part human creature, who helps guide the recruits to safety. Don’t miss these 25 behind the scenes mind-blowing Star Wars facts. 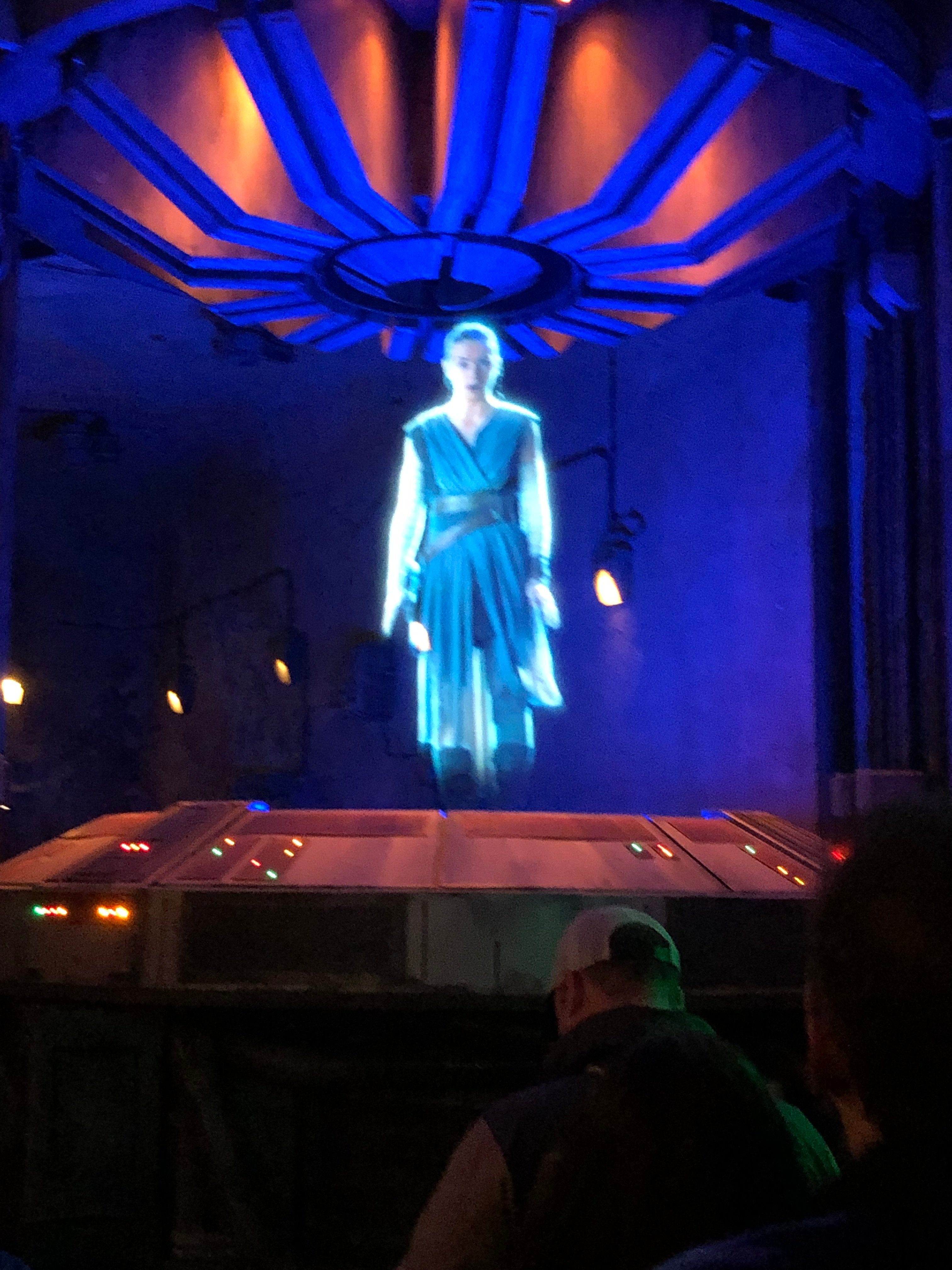 Much like a play, there are four acts to the ride, which lasts about 19 minutes in total. Typical of other Disney attractions, the journey (pre-show) begins while you’re waiting in the line in a forested area, before heading inside to see the crumbling stone walls of Batuu where you’ll walk past lighted flight maps and tactical displays.

The first act is where you learn your mission given to you by a hologram of Rey thanking you, “the new recruits,” aka riders, for joining the cause. She shares that the outpost in Batuu is no longer safe and that everyone must be transported to a secret base.

The second, third, and fourth act

In the second act, riders take a full-size transport shuttle on their way from Batuu to the secret base. But, before the shuttle is about to jump to light speed it’s caught in a tractor beam of a Star Destroyer and pulled into a hangar bay by members of the First Order, who firmly instruct riders to get going (“Move along, Resistance scum,” they command).

In the third part, riders are taken aboard the Star Destroyer and led into an interrogation pod. At last in the fourth part, the riders escape onto a drone-operated trackless transporter dodging blaster bolts and cannons, fighting the forces of evil in a thrilling finale. Don’t miss these 14 insider secrets from a Disney World super-fan.

There are lots of pinch-me experiences throughout the ride, but there’s one wow moment that keeps park-goers buzzing, even after they disembark. After being interrogated by the Resistance, the doors hiss and split open to reveal a massive hangar bay with a life-size docked Tie Fighter and 50 life-sized menacing Stormtroopers standing at attention. Behind them is a window of twinkling stars giving the impression of the vastness of outer space. Immediately, you are made aware of just how large the Star Destroyer actually is.

Margaret Kerrison, a Disney story editor, expects that guests will react in a big way, “I think grown men are going to cry and people are going to fall to their knees and start kissing the ground. There’s just so much anticipation and excitement for this.” Find out secret spots you never knew existed in Disney World. 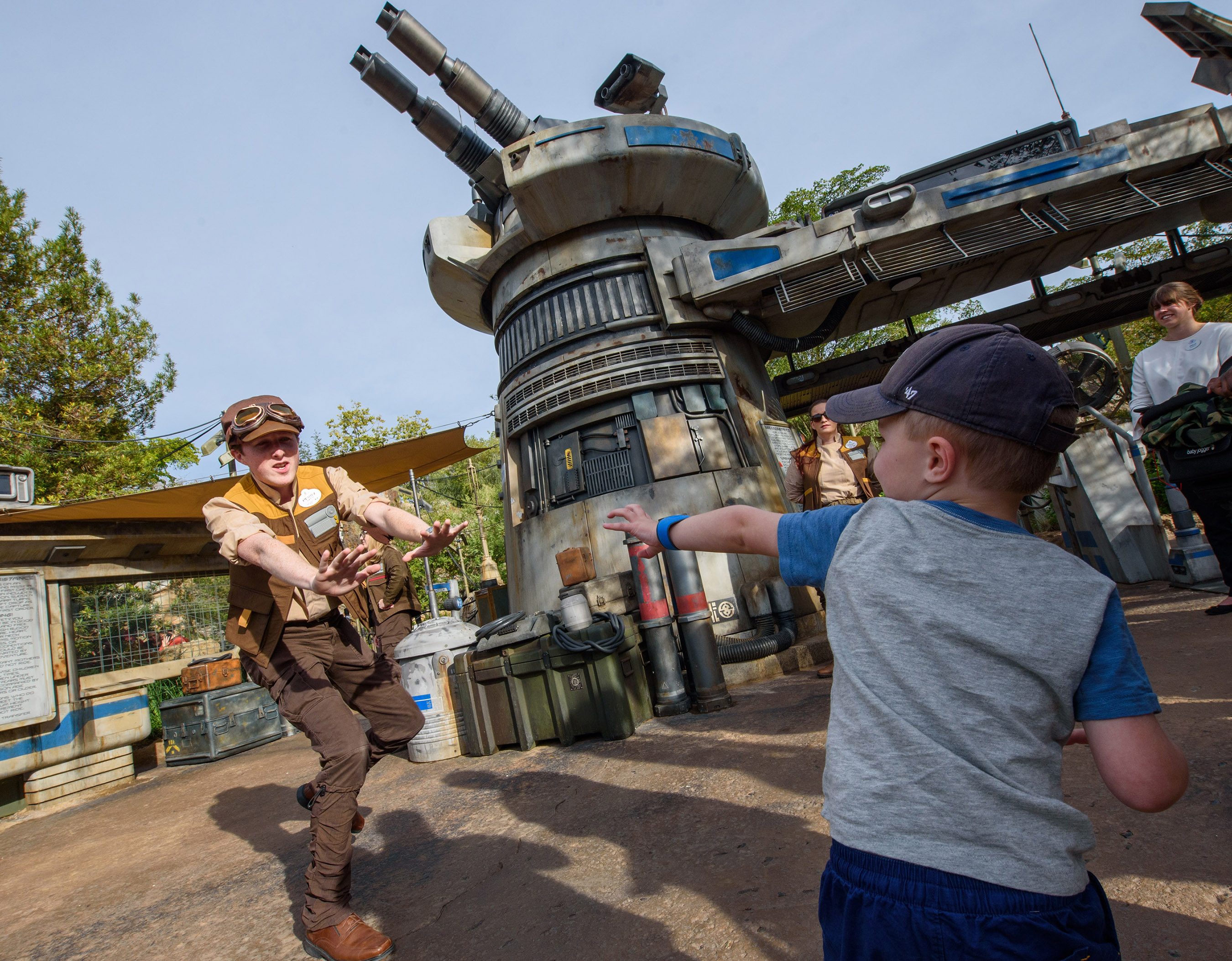 At this time, Disney’s Fast Pass+ is not available for Rise of the Resistance and it is not included in the VIP tours, but keep an eye out for any updates on the Disney Parks blog. Instead, to help reduce the long lines, Disney is offering a virtual queue available on My Disney Experience, the Disney Park app.

An insider piece of advice: Head to the outside gate a few hours before the park opens to get your place in line. Once you enter and your wristband is scanned you are then allowed to reserve your “boarding group” on the app, basically your place in line for the ride. To cut the wait time on other Disney attractions, you can use this trick to skip the lines.

Carey Reilly
Carey Reilly is a writer for Today.com and a contributing editor for Family Traveller magazine. She is a regular on-air product expert for Fox and Friends, Wpix11 and Cheddar News. She was named in 2017 as a Top 50 Influencer and Brand Ambassador for O, The Oprah Winfrey Magazine. She hosted over 80 episodes of the daily talk show, The Daily Glow on Littlethings. She's a stand up comedian and has been seen on Today Show, CNN, The Joy Behar Show, Food Network, Cooking Channel. HLN and The Wendy Williams Show.