The department store's parade has become a classic holiday tradition. 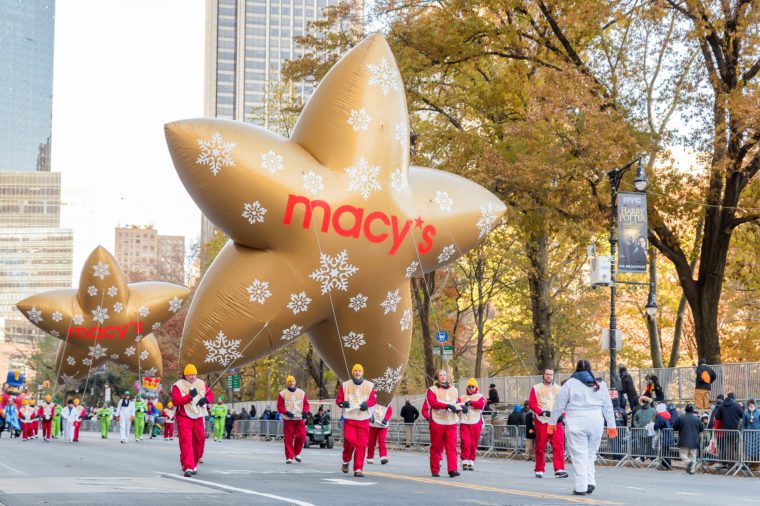 Thanksgiving is rich with traditions—family, food, and football. But since 1946 there has been another custom that brings people together and that’s in the form of the televised Macy’s Thanksgiving Day Parade (the event was first held in 1924 prior to the advent of TV). We wake up to the elaborate parade in the morning while enjoying a day off from school, cooking up a storm in the kitchen, or simply lounging in our pajamas sipping coffee. The parade has become as much a part of Thanksgiving as the big meal itself. These are some of the spectacle’s greatest hits. Don’t get so caught up in the parade (or reading this story) that you forget about your Thanksgiving dinner timeline. 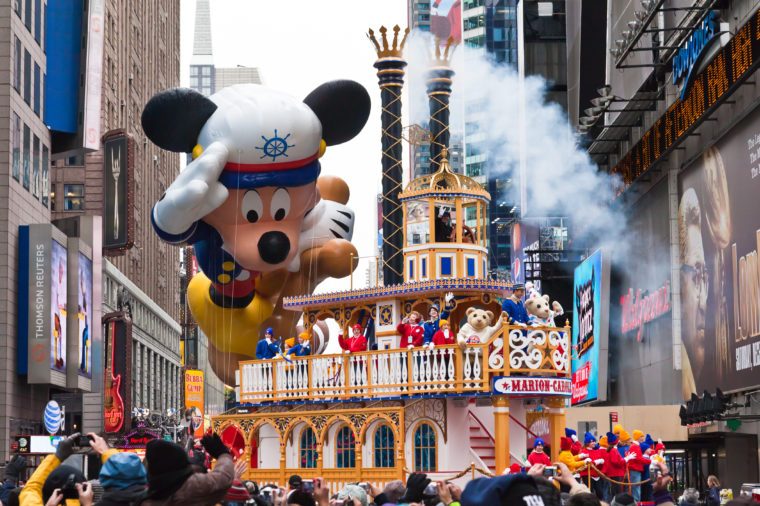 Make way for Mickey Mouse and his elaborate steamboat float. The Disney icon appeared to help shepherd the float through New York’s Herald Square back in 2010. The float itself was loaded with holiday revelers and lively characters, boasting a steam feature to make it look as though the boat was truly floating on water. Check out these 18 vintage Mickey Mouse images that will take you way back. 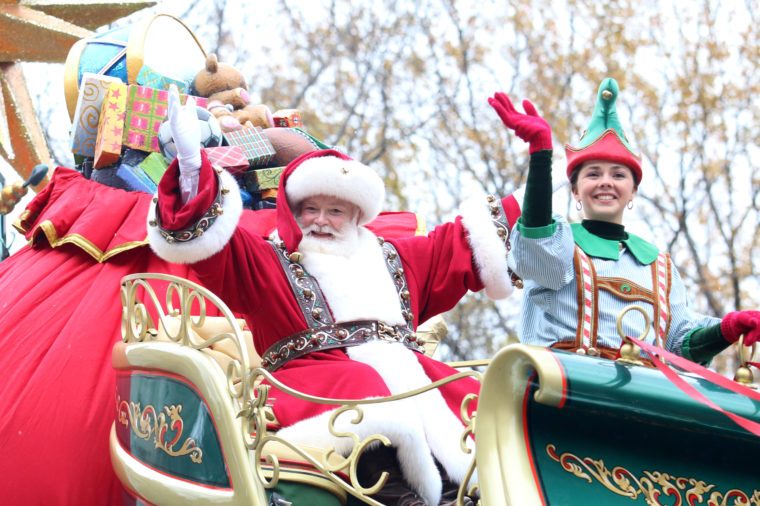 No matter how many years they send him down the parade route, Santa always rides in style. The arrival of the big guy typically marks the end of the parade and the official start of the countdown to Christmas. In 2014, Santa was surrounded by gifts and his hardworking elves in a deluxe sleigh. Read up on the funny ways people learned the truth about Santa. 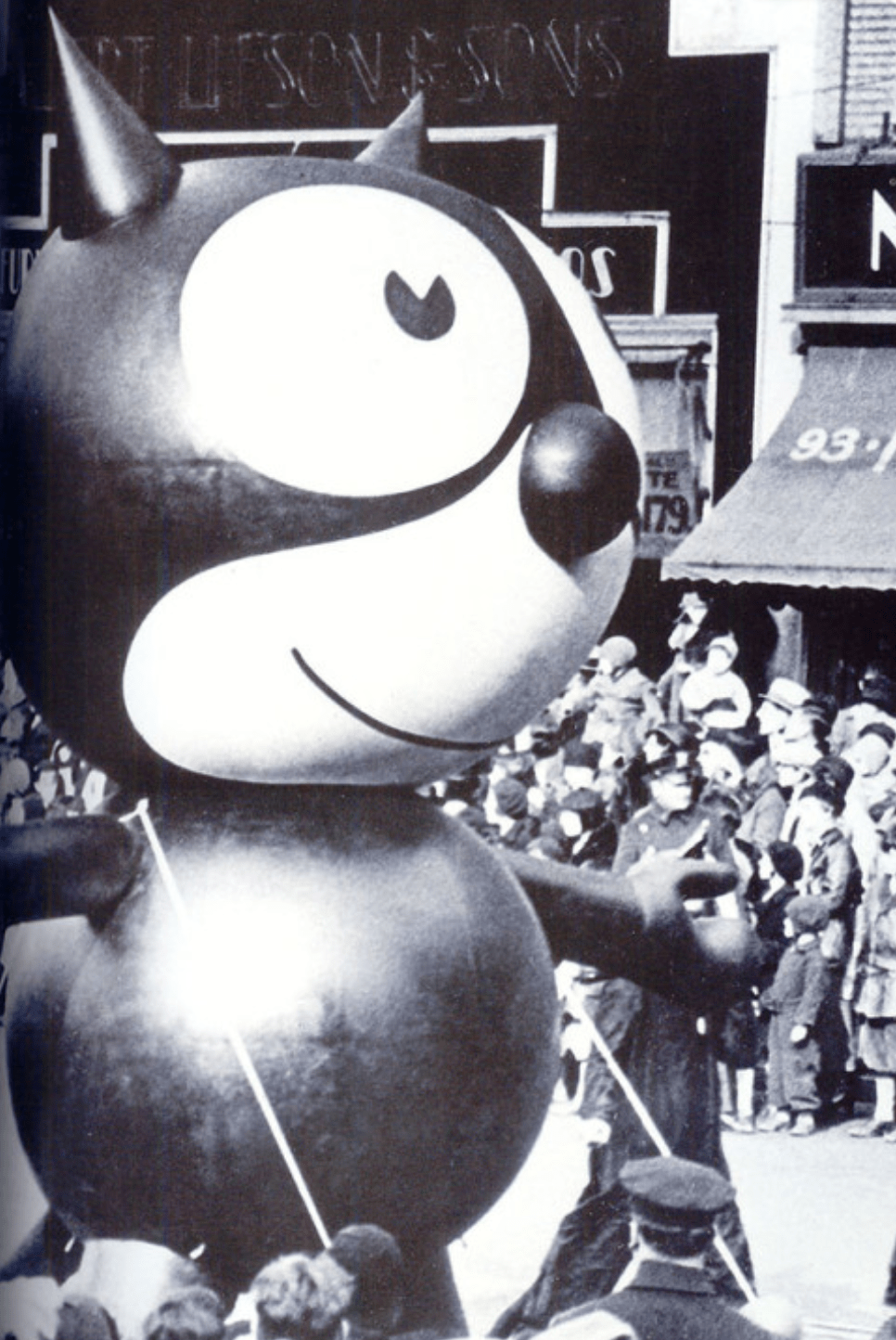 When talking about the parade’s greatest hits, we must pay homage to where it all started. Macy’s first-ever balloon float drifted down the parade route in the form of Felix the Cat. Everyone in its path marveled at the famous black-and-white feline navigating the parade with the help of a team of handlers. Cranberry sauce too bitter? Here’s how to fix it and 9 other turkey day mistakes. 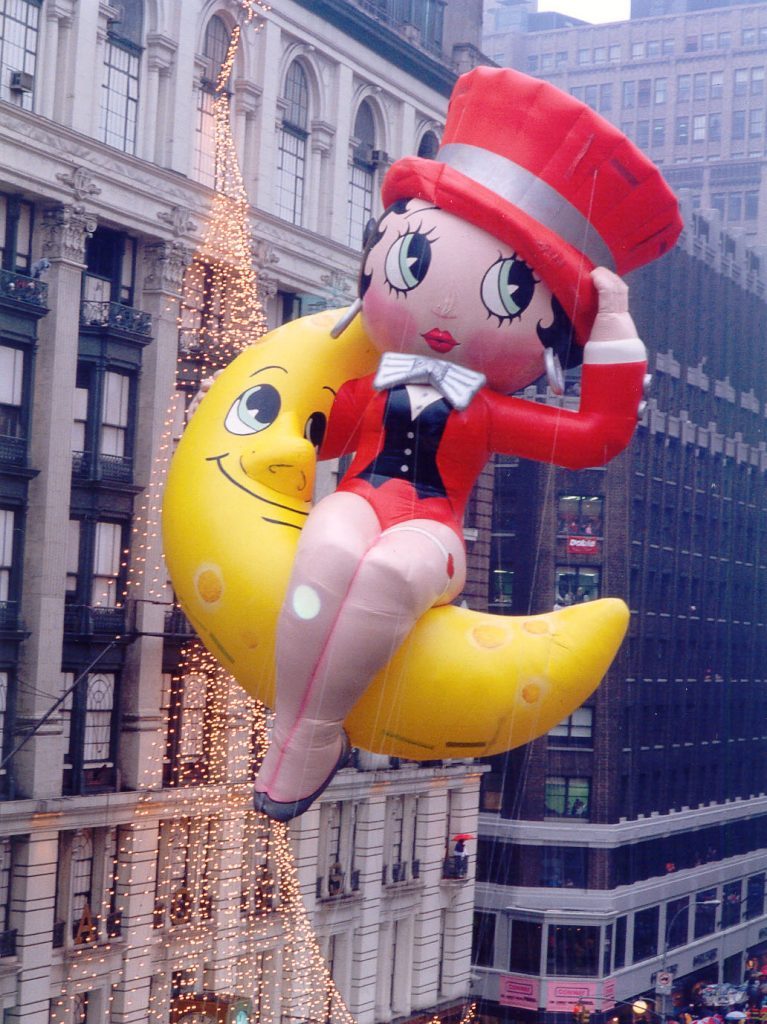 The characters who join the Macy’s Thanksgiving Parade from year to year are very indicative of what’s popular in pop culture at that moment. In 1985, Betty Boop floated through the streets of Manhattan on an adoring crescent moon. The look was so very ’80s and a nod to Broadway with Betty’s top hat and bowtie. If you’ve ever wondered who inspired the Betty Boop cartoon, we have the lowdown on these classic cartoons and their real-life counterparts. 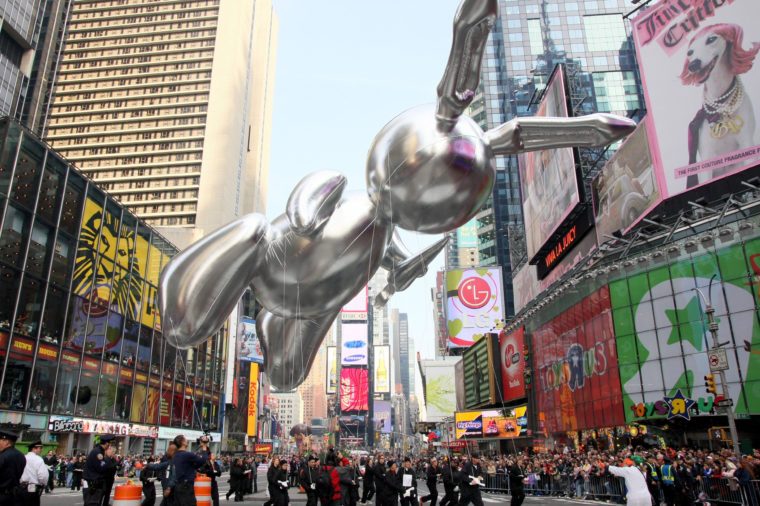 In 2005, the Blue Sky Gallery Balloon Series was introduced at the parade. In 2006, artist Jeff Koons designed the second balloon in the series—this sleek silver rabbit. The whole point of the series is to give celebrated artists the opportunity to translate their original creations into parade balloons. Don’t miss these 15 Thanksgiving day “facts” that aren’t actually true. 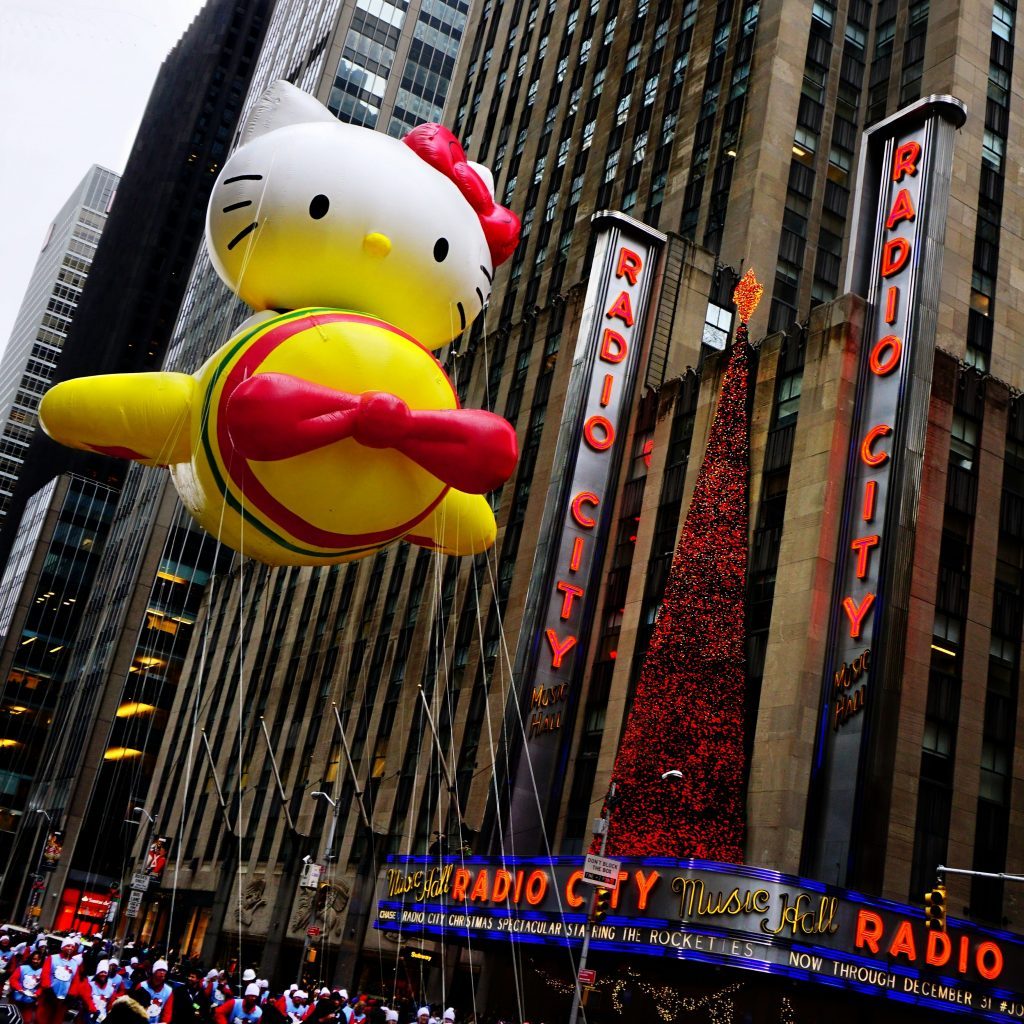 There have been different iterations of Hello Kitty throughout the history of the Macy’s Thanksgiving Day Parade, but the 2014 balloon float is an all-time favorite. Featuring Hello Kitty in a bright yellow plane with a bold red propeller that matches the bow in her hair, the Sanrio character stormed the skies. You have to read these mind-blowing facts about the Macy’s Thanksgiving Day Parade. 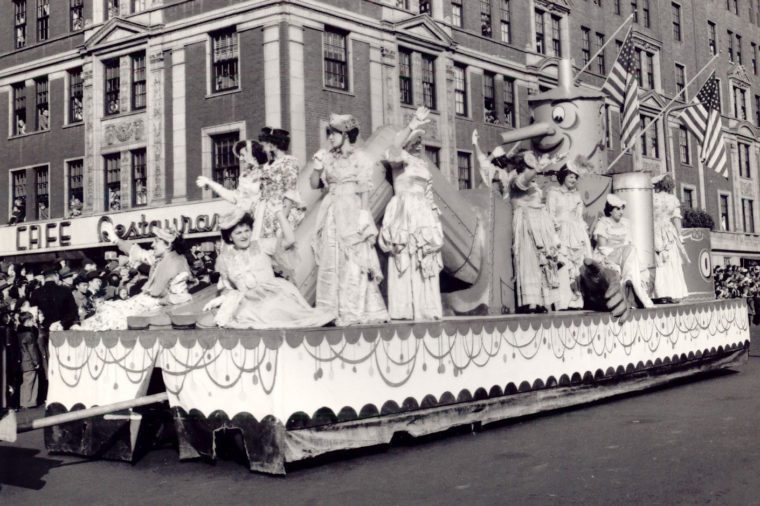 The floats have come a long way since the parade’s early days. While this Tin Man float from the 1940s might seem primitive compared to the pomp and circumstance of its contemporary counterparts, the design was a big deal back in the day. An ode to the Wizard of Oz, the Tin Man finally had his chance to shine. The Wizard of Oz is a great movie to watch when it’s food coma time—so are these 16 funny family movies. 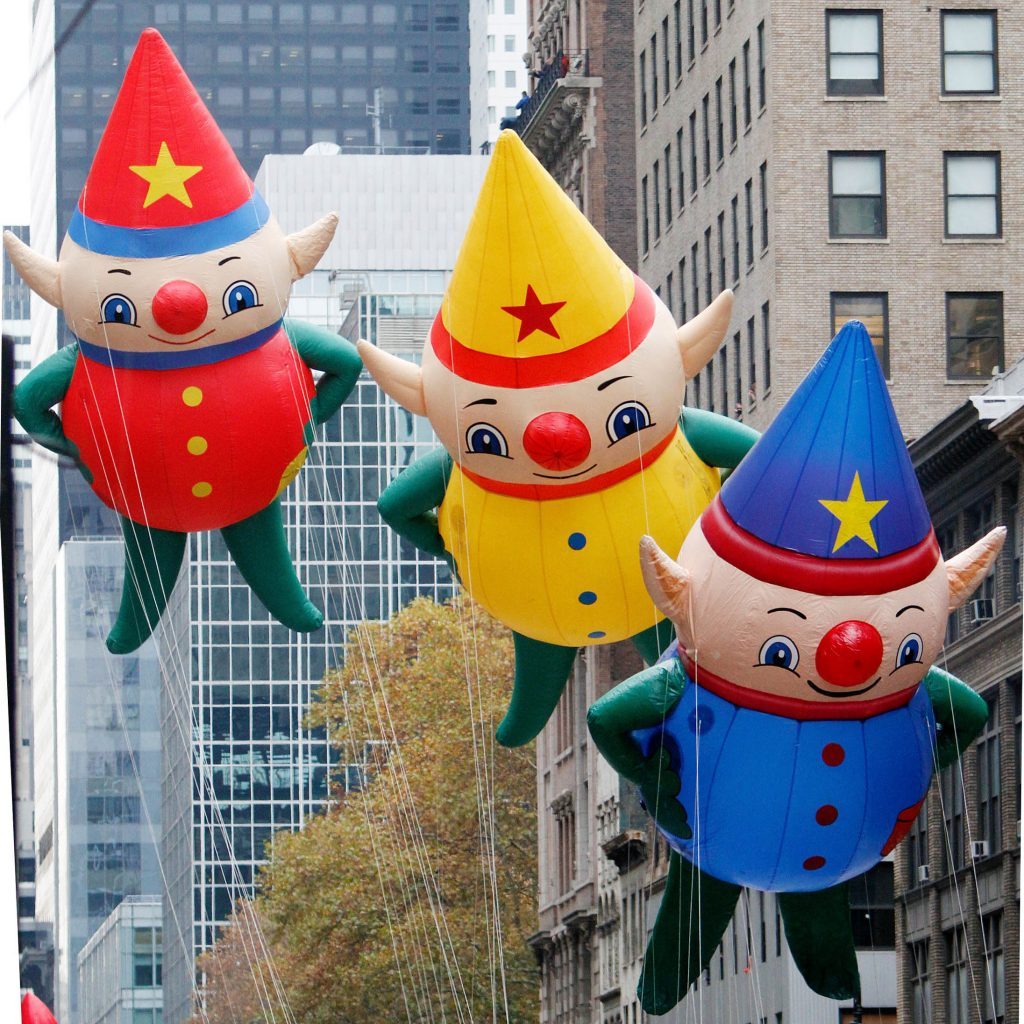 Santa isn’t the only one who needs a little help from the elves. Macy’s uses some of their magic, too. We can’t pinpoint when the department store started rolling out images of their cartoonish buddies, but there are black and white photos dating back to the 1940s of these happy helpers as balloon floats. This is the modern version from 2010. Need a laugh? These Santa and elf jokes are a must-read. 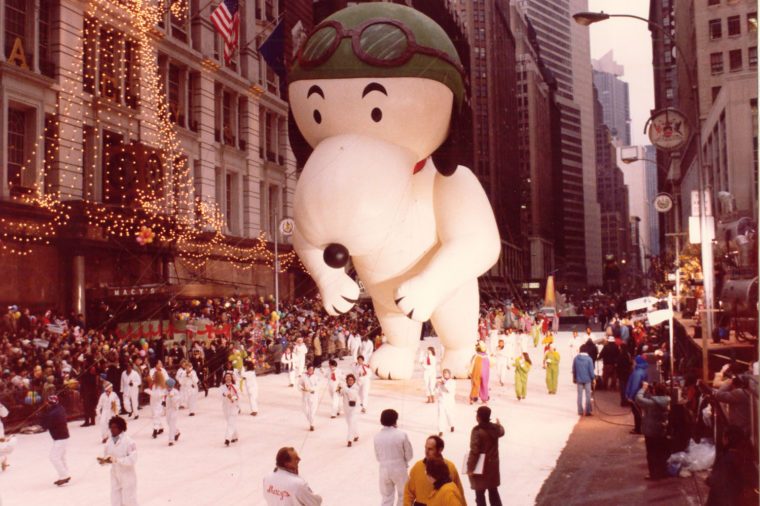 The Peanuts gang and Macy’s have a long, lovely history together. But the debut of Snoopy as a balloon in the parade came in 1968. For that design, the mischievous pup is dressed in his aviator wardrobe as Flying Ace Snoopy. He holds the honor of longest flying character in the parade’s history. In 2019 he’ll fly as an astronaut to mark the 50th anniversary of the lunar landing. Speaking of space, here are 15 everyday items you had no idea were created by NASA. 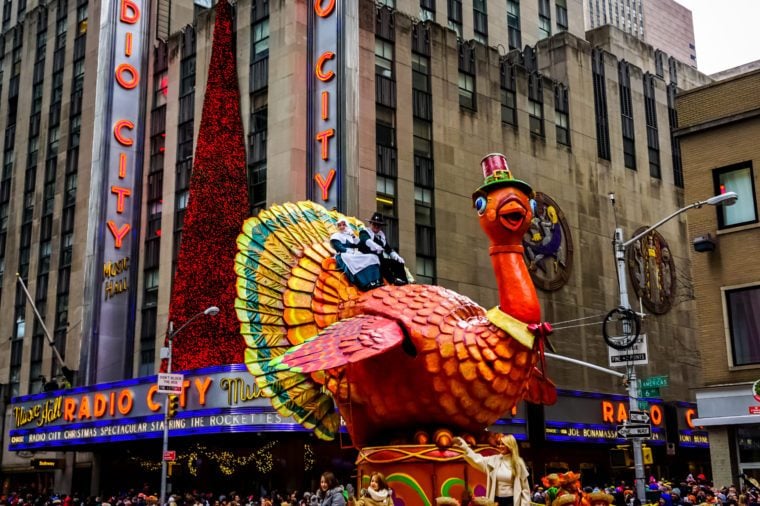 It isn’t Thanksgiving dinner without turkey, and it isn’t the Macy’s Thanksgiving Day Parade without the classic Tom the Turkey float. He’s the oldest and most recurring of the floats, ushering in the parade and the holiday season with his colorful feathers and pilgrim hat. Go, Tom, go! Find out why the president pardons a turkey every Thanksgiving. 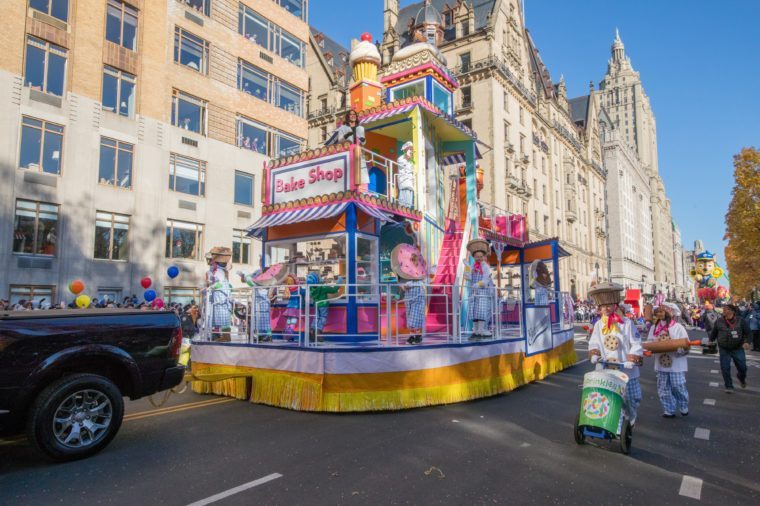 While most people might keep their eyes on the skies to scope out the impressive balloons, there are plenty of elaborate floats down on the ground, too. Everyone’s Favorite Bake Shop by Entenmann’s provides a sweets lover’s paradise as it rolls down the route, carrying excited passengers eager to wave to the crowds. Can you guess America’s favorite Thanksgiving pie? 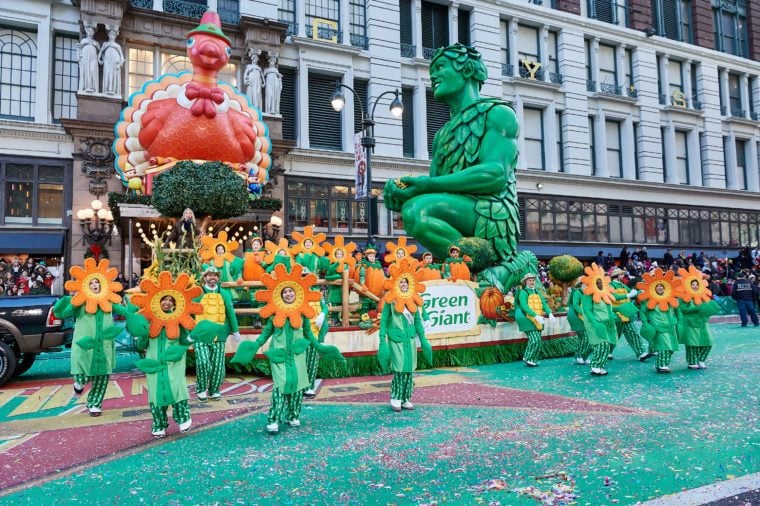 Turkey may be the star attraction of the Thanksgiving dinner table, but every main dish needs its sides. Green Giant puts the nutrition in your holiday meal and delivers an impressive Harvest in the Valley float each year at the parade. Everyone needs a reminder to eat their vegetables, and the big green guy does it in style. Speaking of sides, don’t miss these 21 mouthwatering side dishes to serve alongside your bird. 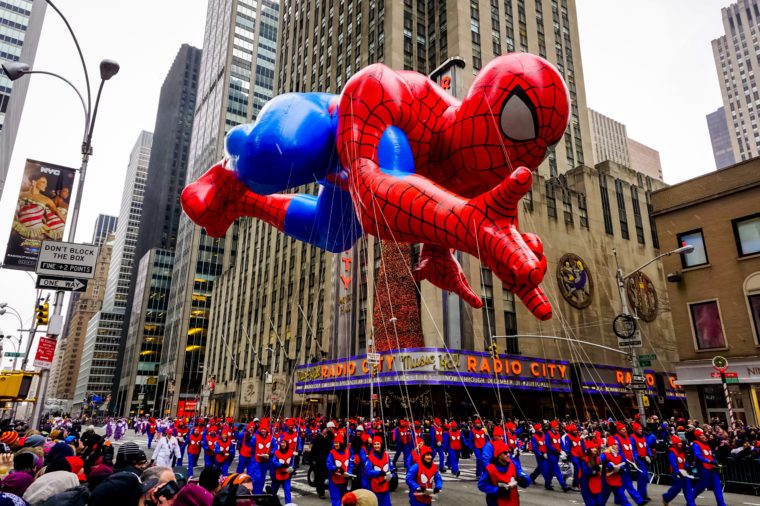 This giant Spider-Man float made his debut in 2009 and appeared in this iteration until 2014 (Marvel debuted a newer version of the superhero in 2018 to celebrate the release of Spider-Man: Into the Universe). This design was 78-feet long, making him the longest balloon in the parade in 2009. Follow this menu to host the best Thanksgiving ever.