10 Awesome Disney Attractions You Can Only See Overseas

Disneyland, in California, and Disney World, in Florida, are both packed with fun, imaginative, nostalgic attractions. But they're only two of six Disney parks worldwide, and the attractions throughout the different parks are far from identical. Here are some awesome rides and attractions that you'll find in the parks overseas.

Don’t get us wrong, we love the Mad Tea Party teacup spin at Disney World. It’s a total blast! But Disneyland Paris’s Alice in Wonderland themed attraction, Alice’s Curious Labyrinth, captures the movie’s sense of wonder and curiosity in a whole different way. It really is a hedge maze, where you walk through and pass familiar Wonderland sights, trying to find your way to the Queen of Hearts’s castle at the end. While you may not be able to explore a Wonderland labyrinth in the U.S. parks, you can embark on a hunt for these secret spots only Disney fanatics know about in the parks.

Okay, did anyone see the turtle-surfing scene in Finding Nemo and not think, “Man, I wish I could do that!” Well, if you visit Disneyland Paris, you can do the next best thing! Crush’s Coaster, a more thrilling ride than Disney World and Disneyland’s tamer Nemo-based attractions, takes riders through major scenes from the 2003 movie, including the awesome East Australian Current scene, in a turtle-shell car.

Mystic Manor can be considered a twist on the Haunted Mansion—a supernatural adventure through a grand house, but without any references to death or the afterlife to account for cultural differences—but the ride has a feel all its own. Just look at that picture, at the beautiful, detailed exterior to the manor. Mystic Manor is less spooky, more whimsical, than the Haunted Mansion. The premise is that a magical box was mistakenly opened, awakening the artifacts throughout the ride. Its impressive trackless technology and gorgeous visuals make it a not-to-be-missed ride, no ties to a notable Disney film franchise required.

It only makes sense that Disneyland Paris has a ride based off of the Paris-set Pixar film Ratatouille, and it sounds like a lot of fun! Riders are shrunk down to the size of Remy the rat as they careen through an oversized kitchen, reminiscent of the chase scenes in the movie. And that’s not all. Ratatouille is all about the food, so it doesn’t just get a ride in Disneyland Paris—it gets a dining experience, too! You can stop by Bistrot Chez Rémy for a delicious French meal, also from a rat’s-eye view in a larger-than-life restaurant setting. Ratatouille‘s Parisian setting is pretty obvious, but we bet you didn’t know about these lesser-known real places that inspired Disney rides.

The TRON movies (despite having a cult following) may not be among Disney’s best-known properties, but this ride is considered to be one of Disney’s worldwide best. This racing ride has been called “Space Mountain on a motorcycle.” The high-tech cycles are pitched forward so that you’re rushing almost face-first through a futuristic cyber-scape. And stateside Disney fans will actually be able to experience this ride in the near future—a version will debut in Disney World’s Magic Kingdom in 2021. In the meantime, check out the amazing attractions that are arriving at Disney World this year. 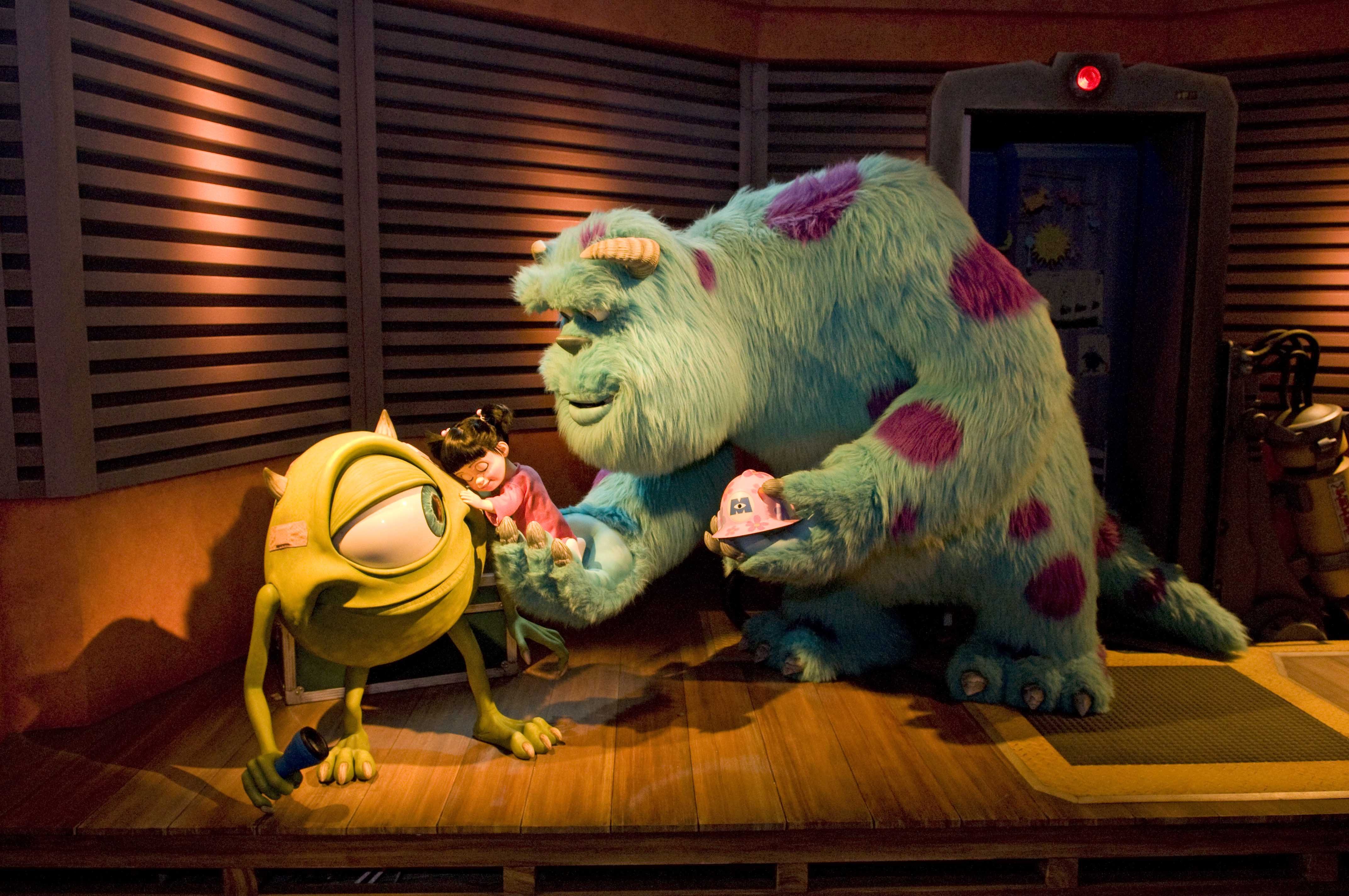 Yes, Disneyland’s California Adventure does have a Monsters, Inc.–themed ride, but the Tokyo version has a totally different feel. Riders of Ride & Go Seek are equipped with flashlights, whose beams trigger the interactive animatronic characters. Disney aficionados know that the California Adventure ride was a hasty update of the much-maligned Superstar Limo, widely considered one of Disney’s worst attractions ever. Ride & Go Seek, meanwhile, feels like a fully thought-out attraction that puts new twists on the beloved friendly-monster flick.

The newly opened Toy Story Land in Disney World is full of awesome attractions based on the beloved Pixar quadrilogy. And Disneyland Paris has a ride that we think would be perfect for this land—Toy Soldiers Parachute Drop. It’s a thrilling, but not scary, drop tower that puts you in the parachutes of Toy Story‘s green army men as you rise and then drop 82 feet. It’s similar to the Tower of Terror—one of the rides every Disney fan should experience twice—but far less intense, so it could definitely provide an entry point to some of Disney parks’ bigger thrill rides!

Big Grizzly Mountain has a similar concept to America’s Big Thunder Mountain Railroad but is considered to be better than at least the Florida version. It changes directions to go backward, like Animal Kingdom’s Expedition Everest, and it tells a story of a family of bears living inside a gold-filled mountain cave.

This isn’t a ride, but it sure looks like a cool experience! At Camp Discovery, the outdoorsy land in Shanghai Disney’s Adventure Isle, you can test your courage on Challenge Trails, three separate ropes courses that are unlike any other Disney attraction. The setting is modeled after an archaeological site, alongside a massive mountain with a cascading waterfall. If you prefer to stay in the U.S. parks, make the most of your trip with these insider tips from a Disney World super-fan.

Journey to the Center of the Earth, Tokyo DisneySea

No, the 2008 movie with this title, starring Brendan Fraser, was not by Disney. But both that movie and this Tokyo DisneySea ride are based on a story by Jules Verne where intrepid explorers, you guessed it, embark on a journey to the center of the Earth. You can take a similar journey on this thrilling Tokyo DisneySea adventure. This ride captures the futuristic, steampunk-style aesthetic that was a major part of Walt Disney’s original visions for the park as you hurtle through subterranean dangers in a steam-powered mine car.