15 U.S. Islands to Visit Without a Passport

Itching for a tropical vacation, but don't want to deal with getting a passport, the currency exchange, and any language barriers? Lucky for you, there are plenty of islands that are part of the United States—so no passport (or hassle) required! 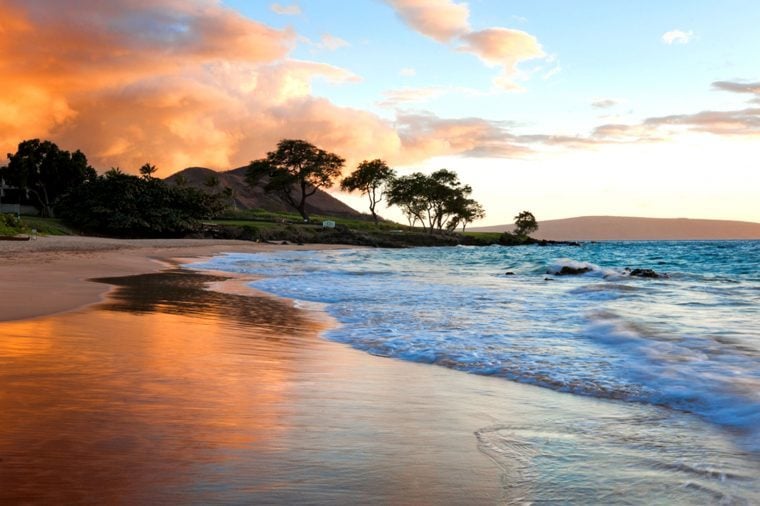 This one is an obvious choice for island vacations, but that doesn’t mean it’s overrated! Maui is full of natural beauty, and it’s temperate enough for outdoor adventures any time of the year. You can go snorkeling or whale watching on the coast, or simply soak up the sun all day on one of the many pristine beaches. Rent a car and drive along the northeastern coast to Hana for a breathtaking ocean vista, or hike through the Haleakala National Park, full of sunlit bamboo forests. Don’t forget to sample some of the delicious native street food! Here are some more amazing spots for tropical vacations around the world. 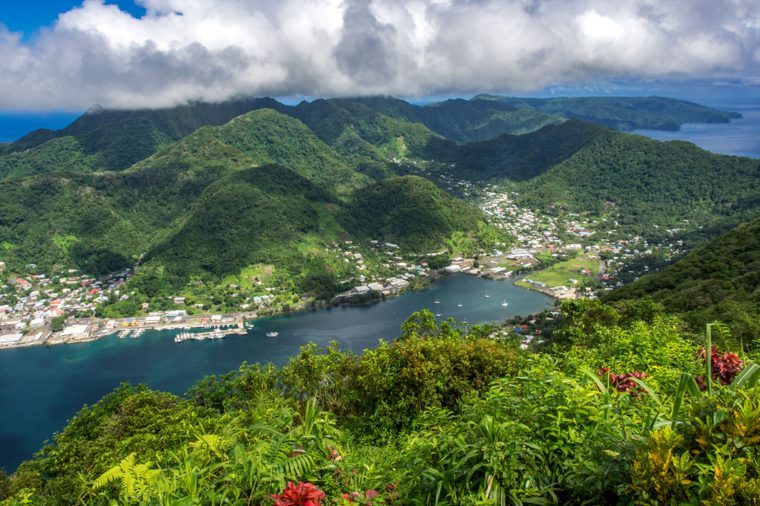 In the heart of the South Pacific, the American Samoa U.S. islands are home to tropical rainforests, beautiful beaches, and huge coral reefs. You can stay at one of several lovely beachfront resorts or find a unique vacation rental. On the island of Apia, visit the Samoa Cultural Village to learn about Samoan traditions, and hike to the beautiful Papapapaitai Falls. Water transport between the two main islands of Upolu and Savai’i is provided by Samoa Shipping. 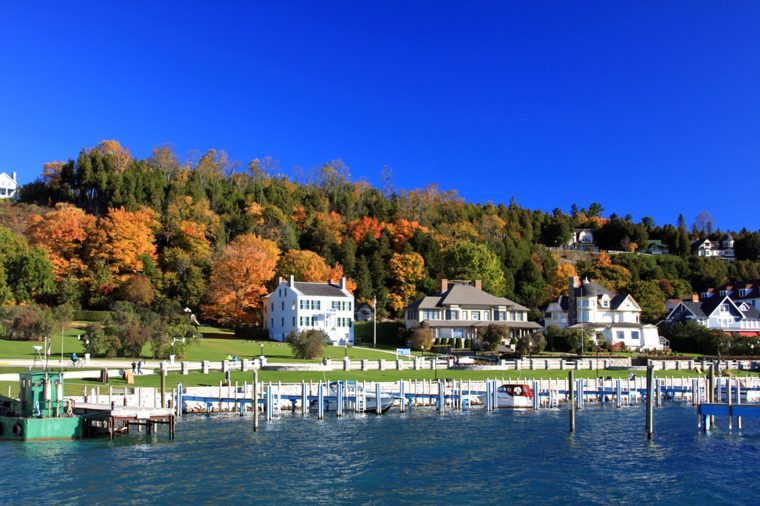 Not all the best island vacations are in the tropics! Mackinac Island in Lake Huron, Michigan, combines Midwestern charm with resort vacationing. The small island was home to a British fort in the Revolutionary War, and the entire island still retains the look and feel of a Victorian town. It’s an ideal vacation spot for history buffs, families, and those who want to sample famous locally made fudge from the dozens of fudge shops on the island. Late spring through the summer is the best time to visit Mackinac, as the island does tend to stay Michigan cold through most of the spring. If your passport hasn’t expired yet, you’ll also want to see these European islands you haven’t thought to visit. 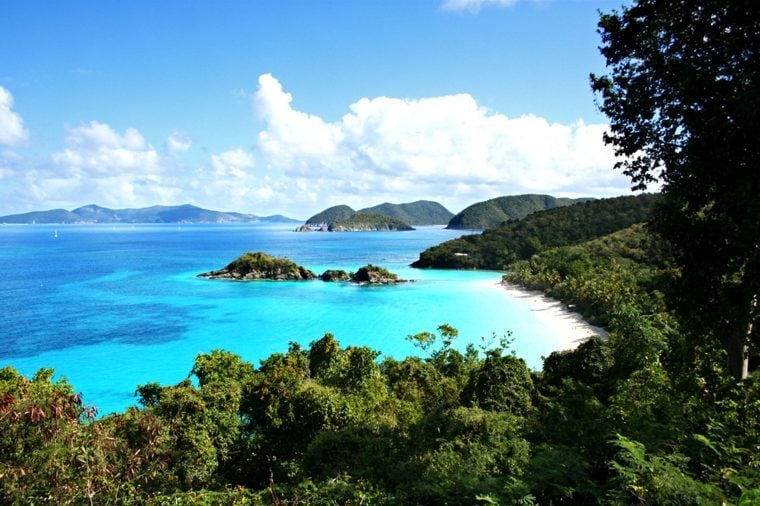 The third largest of the Virgin Islands, St. John has fewer tourists but just as many white-sand beaches as the more popular St. Thomas. Here, you can take a kayak or sailboat tour of St. John’s bays and swim or snorkel in the crystal clear ocean (where you may see some sea turtles). Enjoy the beautiful, pristine nature on the island (60 percent of which is a preserved National Park), but also set aside some time for shopping and dining in the lovely Mongoose Junction downtown district. Here are more of the best beaches in America. 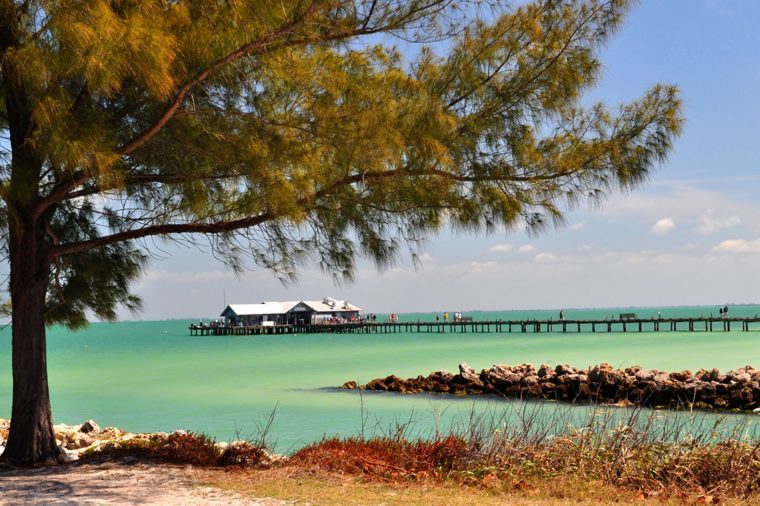 Forget Key West. For leisurely tropical vacations with smaller crowds and sunny weather all year round, head to Anna Maria Island, just a short drive from Tampa. Stay in a cottage on the beach and eat fresh-caught seafood and tropical cocktails right on the sand at Sandbar. Nature paths run the length of the barrier island, providing excellent opportunities for strolling along the waterfront. In the evening, head to Bean Point at the northern tip of the island for a phenomenal view of the sun setting over the ocean. 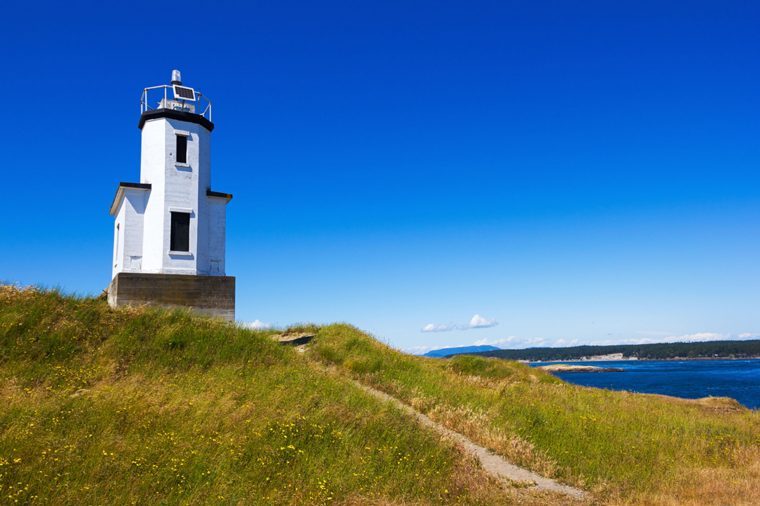 Just this side of the Canadian border, in the strait between Vancouver Island and Seattle, lies San Juan Island. Like Seattle, San Juan Island is rainy for most of the year—but in the summer, mild temperatures and endless outdoor adventures make it the perfect place for adventurers and nature lovers. You can walk or bike down one of the scenic byways, go sailing, or take a drive down the San Juan Islands Scenic Byway. For the foodies in your family, consider taking the San Juan Island Food & Farms Tour! Check out some gorgeous beaches you’ll want to add to your bucket list ASAP. 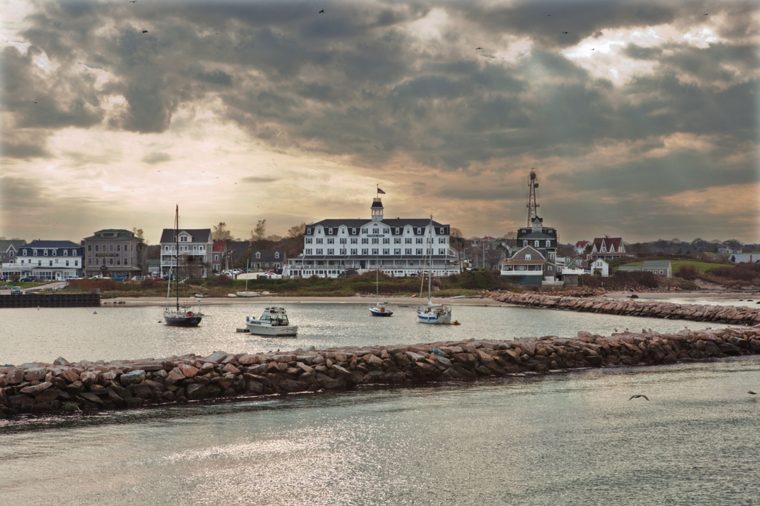 Another one of the island vacations ideal for outdoorsy types, Block Island is a unique New England paradise with lighthouses, white sand beaches, miles and miles of hiking trails and very little else. There’s only one town on Block Island—New Shoreham—and it’s quite small. Spend your day sea kayaking, surfing, or taking a yoga class, then head into town in the evening for some casual dining (including freshly caught lobster when it’s in season!) and live music at the Yellow Kittens Tavern. 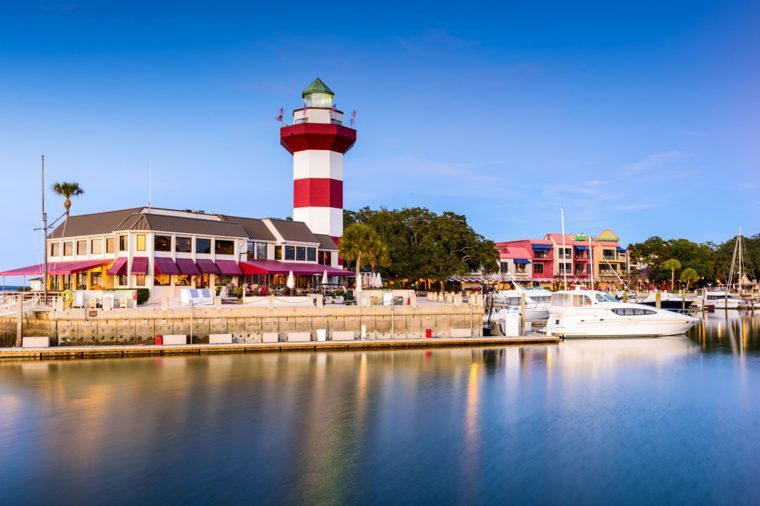 Though Hilton Head is certainly no secret anymore, it’s one of America’s favorite spots for tropical vacations for a reason. This sunny southern island is a legendary destination for golfers, but it also offers opportunities for tennis and volleyball players—and for those who just want to relax on the sidelines. If participatory sports aren’t your thing, you can hike through the Sea Pines Forest Preserve, bike along many seaside trails, or take in the view from the top of the Harbour Town Lighthouse. After you’ve worked up a sweat, sleep in the lap of luxury at the highly-rated Sonesta Resort and book yourself a spa day. Here are more of the top summer travel destinations in the United States. 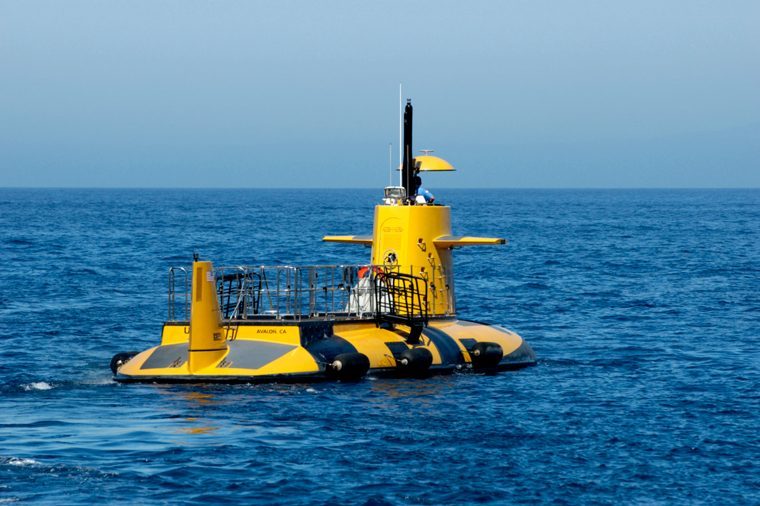 Over on the always-temperate West Coast, Santa Catalina Island is a Los Angelean’s favorite place to get away from the hustle and bustle of the city. Located just an hour-long ferry ride from the city, Santa Catalina is a perfect getaway for tropical vacations for the whole family, with sandy beaches, fine restaurants, and plenty of outdoor activities. Go parasailing, take a glass-bottom boat tour to see all the unique marine wildlife, or get a bird’s eye view of the island on a zip line tour. You can stay in one of the several world-class resorts on the island, or camp right on the beach at the Two Harbors Campground. Be sure you check out these 30 other must-see places around the country to take your kids before they fly the coop. 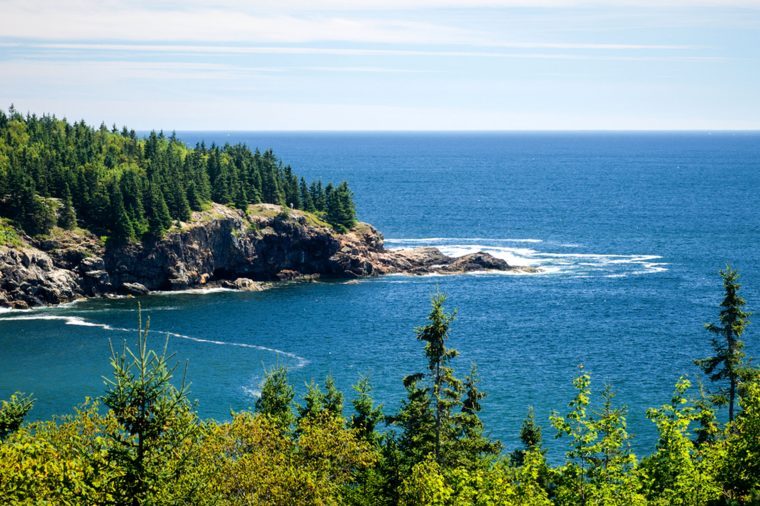 On the other side of the country, Mount Desert Island is filled with evergreen forests and rocky seaside cliffs. Outdoor adventurers can visit the iconic Acadia National Park, which stretches across the middle of the island and includes Cadillac Mountain, the tallest mountain on the East Coast. Visit Mount Desert Island in the fall to see the beautiful autumn color of the leaves, but pack for chilly (35-50 degree) weather. Stay at the quaint Bayview Hotel in Bar Harbor for sweeping views of the ocean right from your room. 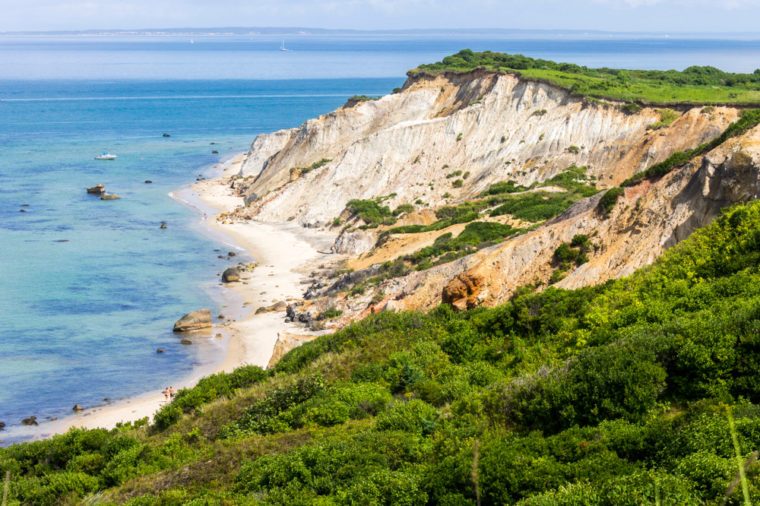 Located around 20 miles off the coast of Cape Cod, Martha’s Vineyard is a favorite destination of celebrities like President Obama, Bill Gates, and Oprah. Martha’s Vineyard contains six separate towns and is a little more laid back than its nearby partner in the world of U.S. islands, Nantucket. You can gaze at the stunning Aquinnah Cliffs, stroll through the adorable pastel Gingerbread Houses in Oak Bluffs, and shop at the original Black Dog store, which is attached to a tavern with scrumptious food options. 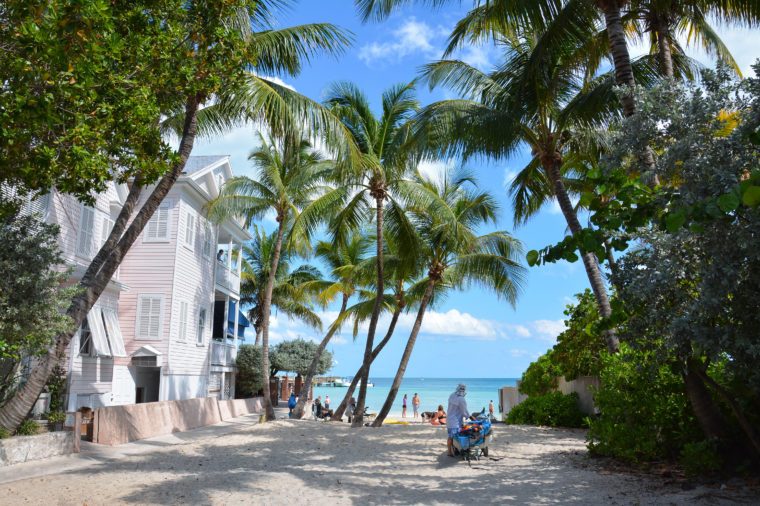 A popular destination for cruise ships, Key West is a great spot for travelers who want an island getaway without leaving national borders. You can visit the southernmost point in the continental United States, where you’ll be approximately 100 miles from the coast of Cuba; snack on chocolate-covered slices of Key lime pie in its namesake; or learn about the region’s literary history—while petting cute cats—at Ernest Hemingway’s Key West home and museum. Learn about some practically secret island escapes all around the world. 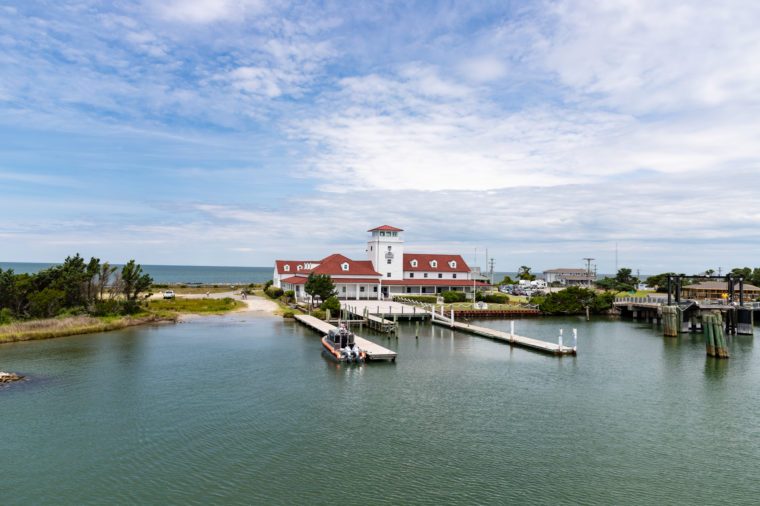 North Carolina’s Outer Banks, somewhat hidden gems among U.S. islands, have a devoted following of vacationers who return year after year. Though technically the entire Outer Banks consists of U.S. islands, Ocracoke is an island among islands. You can traverse most of the Outer Banks by car, but you’ll need to catch a ferry to get to Ocracoke. The most popular is the Ocracoke Express, which takes a mere 70 minutes. And once you arrive, you’ll find lots of peaceful beaches, bike trails, and delicious seafood eateries and homemade ice cream. 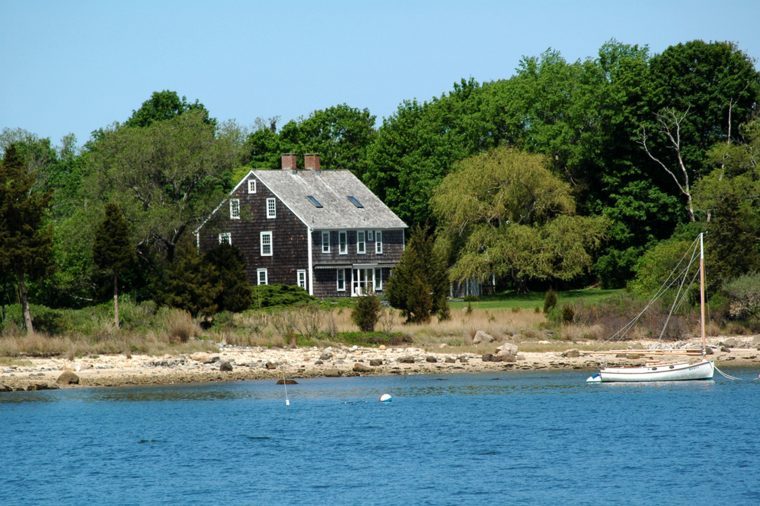 Shelter Island is a great getaway for the summer and autumn when the temperatures are warmer and all the seasonal businesses are open. Book a beachfront vacation rental for a romantic weekend, and have a candlelight Italian dinner at the set-menu 18 Bay restaurant. Families with children can visit the Sylvester Manor Educational Farm to learn about farm life and where food comes from. For some afternoon libations, visit the Shelter Island Craft Brewery to sample some locally made brews. 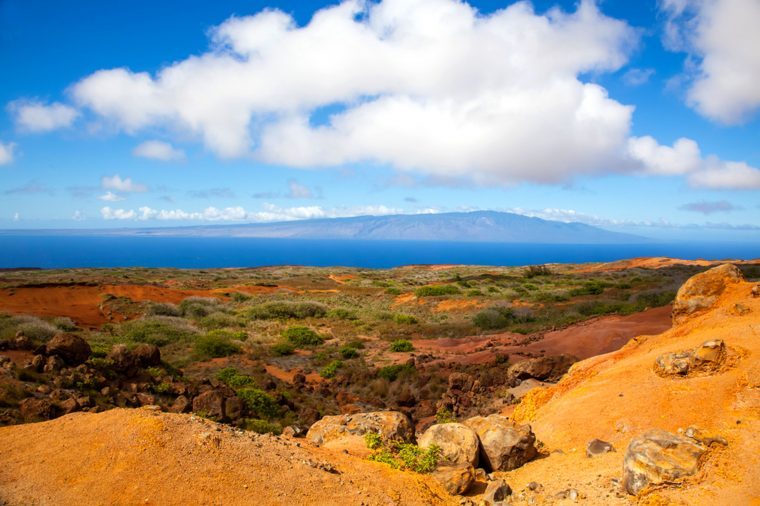 All of the Hawaiian Islands (which are U.S. islands, of course!) make for wonderful island vacations—this is a known fact. But Lanai has some unique attractions that are beacons to adventurous travelers. You can visit the Garden of the Gods, a strange, Mars-like desert landscape stuck in the middle of tropical paradise, or take a trip to the Lanai Cat Sanctuary, which is exactly what it sounds like. There are also, of course, dozens of breathtaking beaches for sunbathing and swimming, and plenty of luxurious resorts to really get the paradise experience. Next, check out these free beach getaways across the country.

Robin Babb
Robin is a freelance writer and editor in Albuquerque, New Mexico. She is a regular contributor to The Weekly Alibi. Her writing has also appeared in edible, The Establishment, and Mask Magazine. She is particularly interested in food, music, pop culture, and their intersections with social justice.