It's not just big cities like Boston and New York that have stunning light shows for the Fourth. Have a good old-fashioned Main Street, USA, celebration complete with prime pyrotechnics at these destinations. 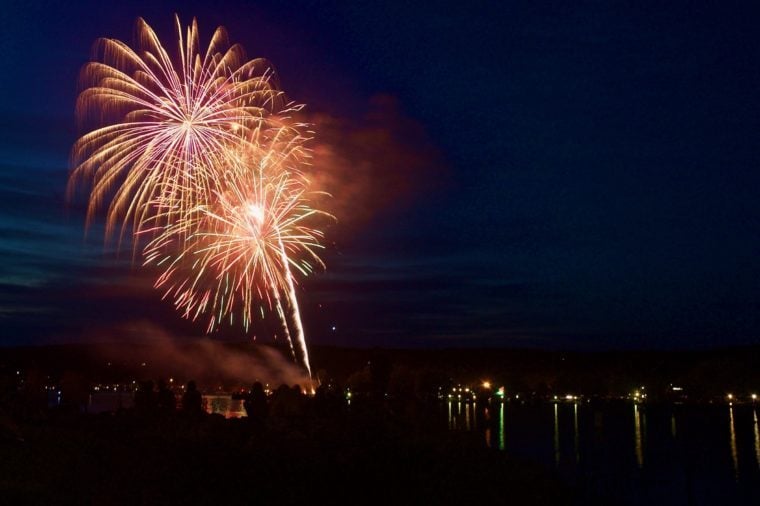 Some of America’s most spectacular Fourth of July fireworks take place in small towns. Boyne City, on the shores of Lake Charlevoix, dubs itself “The Best Fourth in the North,” and for good reason. The two-day festival includes two parades, a pie-eating contest, live music, a raft race on the Boyne River, all capped off with the Grand Fireworks celebration over the lake. Gather to watch the incredible light show from the lakeside park, the docks, or by boat. 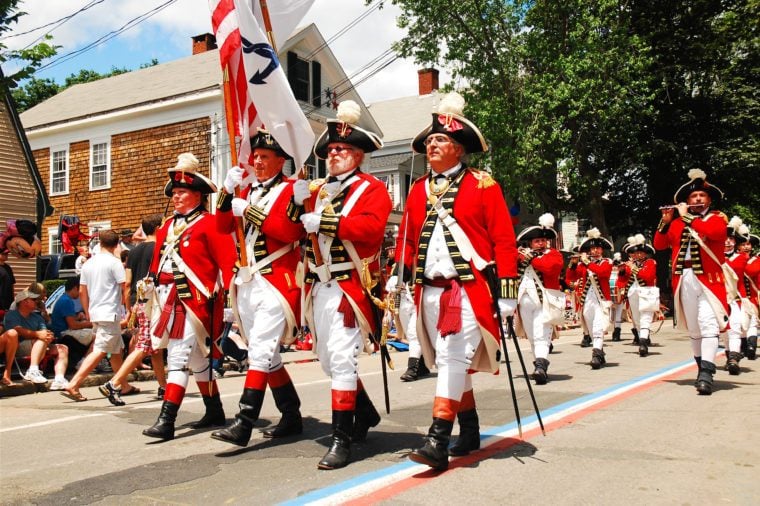 This deep water seaport has held July Fourth festivities since 1785, established by Revolutionary War veteran Rev. Henry Wight. This makes Bristol’s celebration the oldest continuous one in the United States. The town takes the tradition seriously, starting the patriotic party early with events beginning on Flag Day, June 14. As the big day approaches, the town holds a Fourth of July Ball, a firemen’s muster, patriotic exercises, and the Military, Civic, and Firemen’s Parade, annually viewed by 200,000 spectators from around the world. Jaw-dropping fireworks are held on July Fourth Eve (that’s July 3) over the harbor, presided over by a visiting ship from the U.S. Navy—a tradition nearly a hundred years old. No surprise here: Bristol is one of the best places to celebrate the Fourth of July in every state. 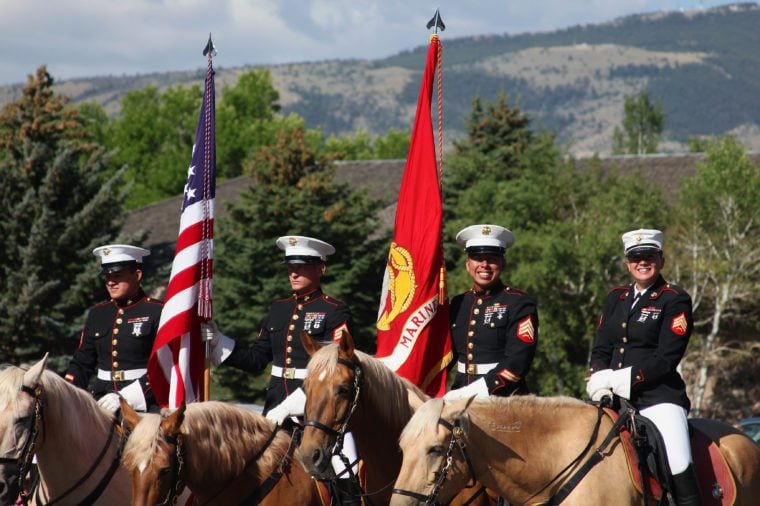 Located just outside Yellowstone National Park, this town named after founder Buffalo Bill Cody pulls out all the Wild West action the famous showman was known for. This year marks the 100th annual Cody Stampede, a four-day July Fourth festival complete with four rodeos and three parades. Once it’s dark, don your cowboy hat and boots to watch the fantastic fireworks from pretty much anywhere in town—even the rodeo itself. 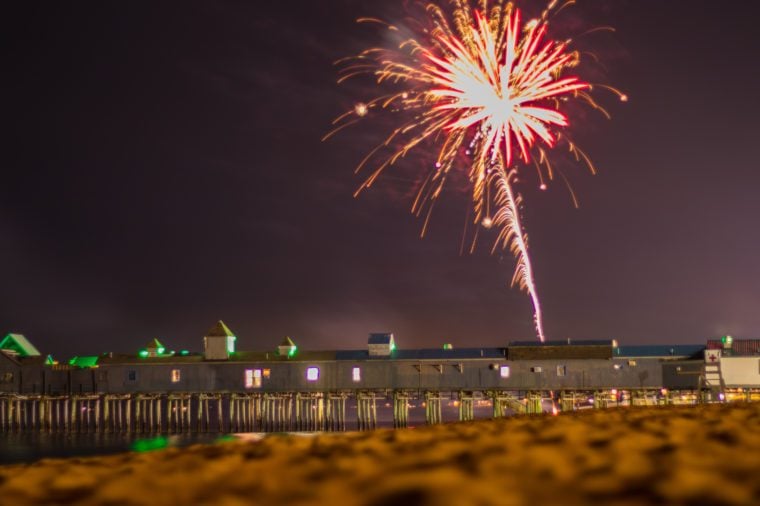 For an old-fashioned boardwalk celebration, visit Old Orchard Beach on the Fourth. Palace Playland, New England’s only beachfront amusement park, features fireworks every Thursday throughout the summer, with a special show on Independence Day. You can also head to the pier to view the spectacle or watch with your toes in the sand and the background music of waves crashing on the shore. A sandcastle-building contest, parade, and concert at the pavilion precede the light show. 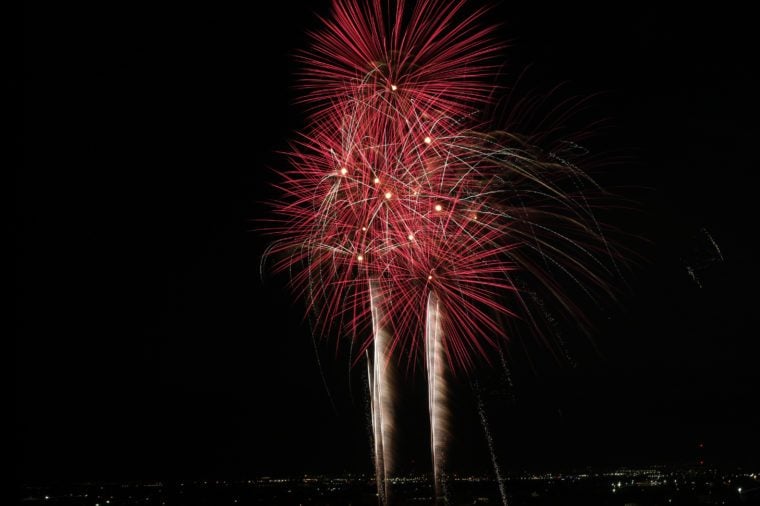 You know anywhere called “Kaboom Town” has to put on a great fireworks display. The best spot to see them is from the carnival, although many restaurants and hotels in the town host viewing parties as well. Be sure to get there earlier for the awesome air show before the big event! The fireworks will be choreographed to music and simulcast on the radio as well. But, visitors aren’t allowed to bring in their own sparklers—these scary stats will convince you to think twice before buying Fourth of July sparklers anyway. An “after party” includes a live concert. Note that the festivities occur on July 3, not the Fourth itself. 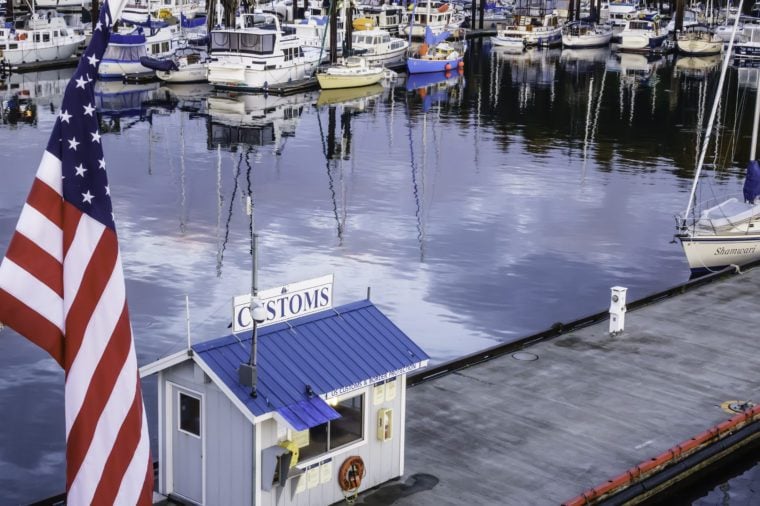 This tiny town off the Pacific coast north of Seattle throws a huge July Fourth celebration, topped with unique pyrotechnics from an award-winning veteran fireworks team. First, enjoy San Juan Island‘s classic small-town parade; then head over to the Pig War Picnic, serving (what else?) pulled pork. (By the way, the Pig War was an actual international incident that started with a dispute over a pig.) Then, head down to the harbor for the Rock the Dock concert, and stay for the fireworks display over the water. To come away with great pics of the festivities, here’s how to take impressive fireworks photos on your phone. 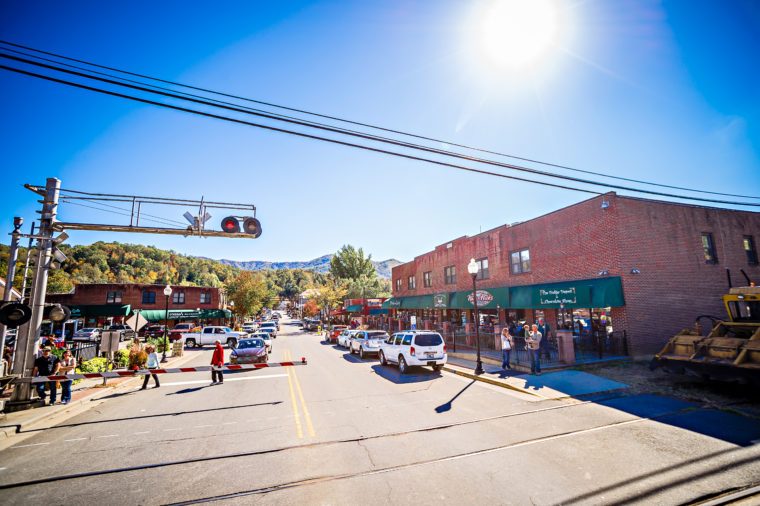 Billed as the “best fireworks show in the Smokies,” Bryson City hosts Freedom Fest on the Fourth, an old-fashioned street festival in its charming downtown. Craft and food vendors, a Kids Zone, a pet parade, a watermelon-eating contest, and live music all lead up to the big event. Visitors can even take an evening ride on the Great Smoky Mountains Railroad Freedom Train for dinner and spectacular sunset views—and get back in time for the fireworks. 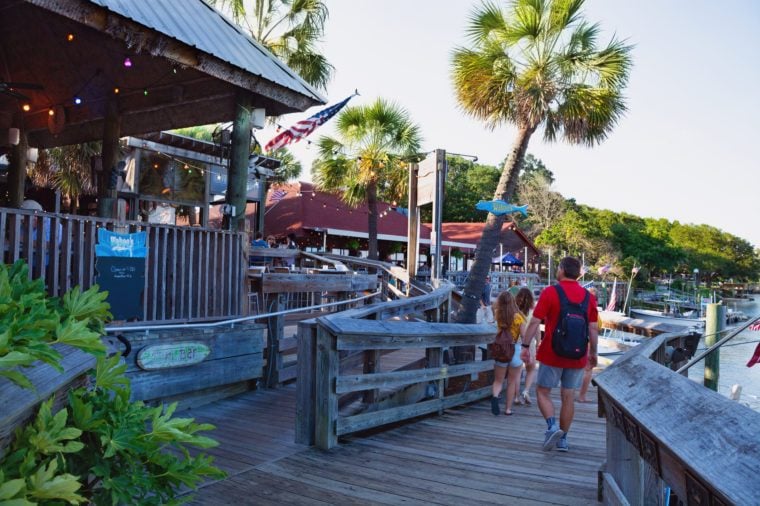 Just south of Myrtle Beach is this haven of restaurants, bars, and live music along a delightful boardwalk over the marsh. The normally lively summer atmosphere of Murrells Inlet gets ramped up for the Fourth, with the area’s largest aerial fireworks show in red, white, and blue. Get there early for parking, and relax at one of the many eateries or stroll along the marsh walk while you wait for the 10 p.m. show to start. Or, come to see the Murrells Inlet Boat Parade at noon, and stay all day. 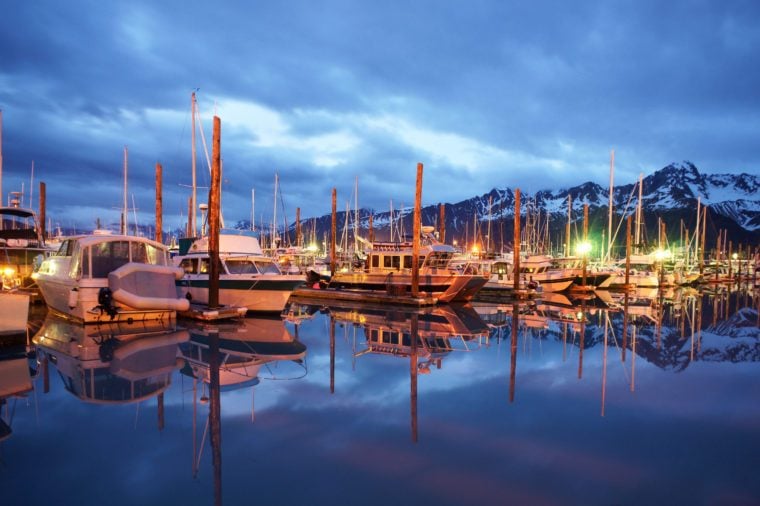 Fireworks in the midnight sun is a bucket-list sight to behold, one of the 10 Fourth of July vacations everyone needs to take at least once. Even though Seward is on the southern coast of Alaska, the sky stays light very late in summer. So, Seward‘s pyrotechnics show over the water doesn’t begin until midnight, when it’s just dark enough to see it. With an amazing mountain backdrop that echoes the booms from the fireworks, it’s a surreal experience. The next morning, kick off the Fourth with the 92nd Mt. Marathon Race over the mountain itself, the “toughest 5K on the planet.” 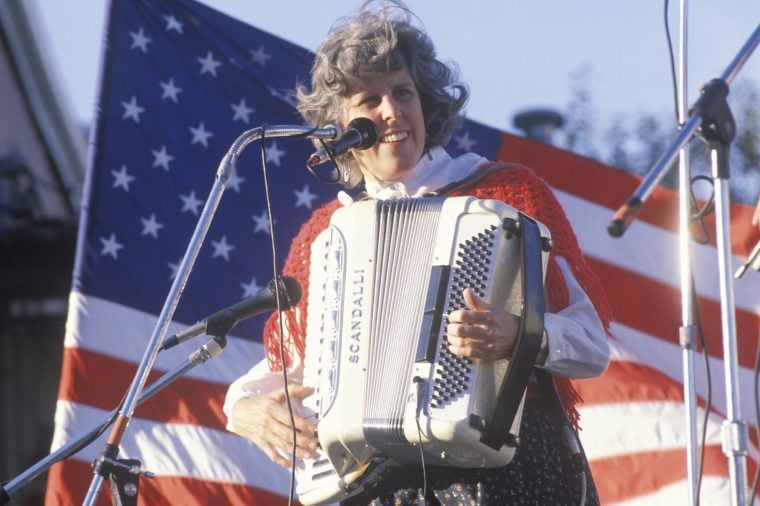 You can’t get any more American than the hometown of Mark Twain, which fetes one of his greatest characters with Tom Sawyer Days, four days of fun from July 3 to 6. The town’s unique history is celebrated with fence-painting contests, frog jumps, a cornhole tournament, live music, a carnival, and much more. The highlight of all the revelry is the fireworks display over the Mississippi River on July 4: a piece of Americana not to be missed. Speaking of American history, do you know the real reason we set off fireworks on the Fourth of July? 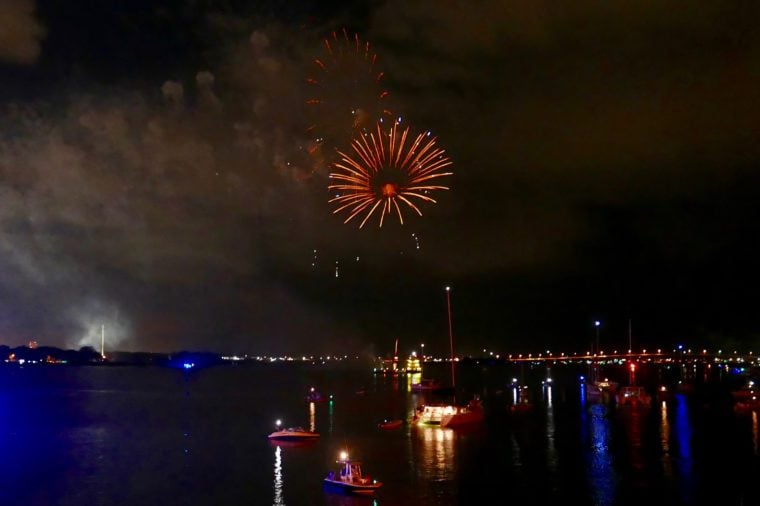 Historic St. Augustine holds the honor of being the longest continually-inhabited settlement in the United States, so it’s fitting the town waves its flag high on the Fourth. The party kicks off with an evening concert of big band and patriotic songs. Then, get ready for the big event, billed as one of the largest and best on the East Coast. The show features 5,000 individual shells and explosions ranging from 100 to 2,000 feet high, set to music—see if you can guess what each type of firework display is called. The action takes place over Matanzas Bay and the historic Castillo de San Marcos—spectators can watch from anywhere along the streets and the Bridge of Lions, all closed to traffic. 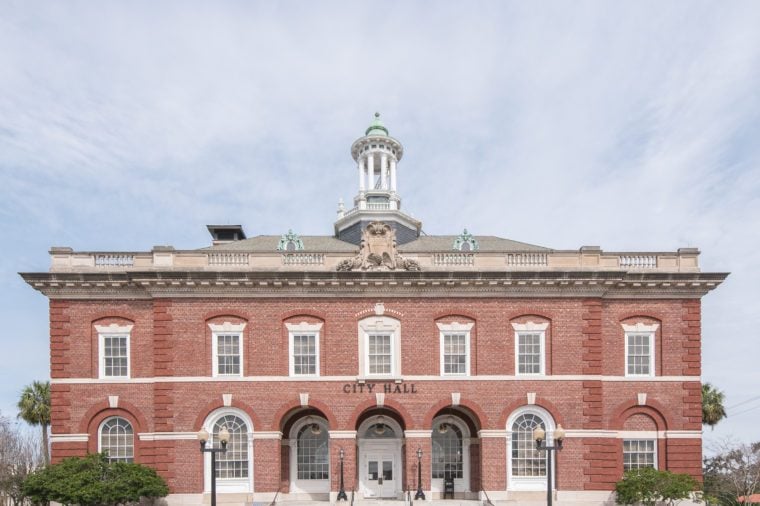 One of the five original points of entry for the U.S. colonies, Brunswick is steeped in history and historic architecture. So it’s not surprising that the small town pulls out big stops for the Fourth. Head to Mary Ross Waterfront Park for a Southern celebration of family-friendly games like sack races and tug-of-war; plus free watermelon, a spectacular sunset, and finally, 30 minutes of fireworks over the East River and Oglethorpe Bay. 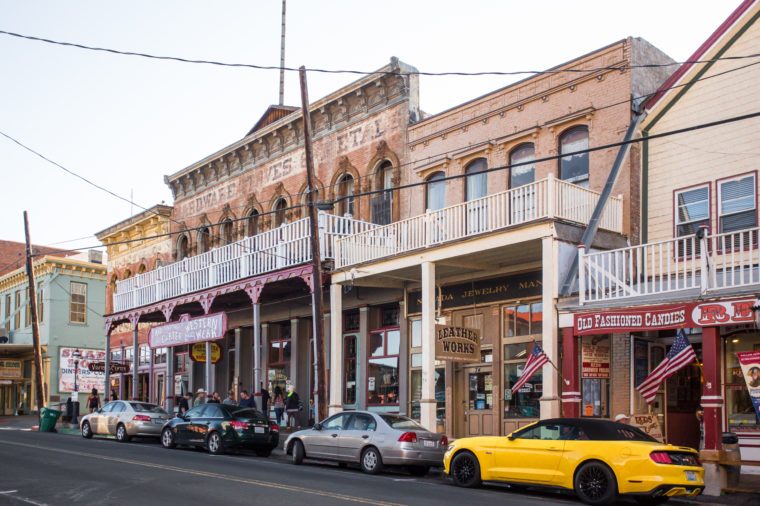 This Old West mining town also remembers its history on July Fourth, with an old-time parade complete with Victorian costumes and even a shootout. Live music and train rides round out the festivities, but the biggest thrill comes after dark: An amazing 30-minute fireworks display that echoes off Mt. Davidson and Six-Mile Canyon, visible from anywhere in town. You’ll feel it in your bones! If you’re wondering how fireworks can make such loud booms, here’s the answer along with 12 other fascinating facts you never knew about fireworks. 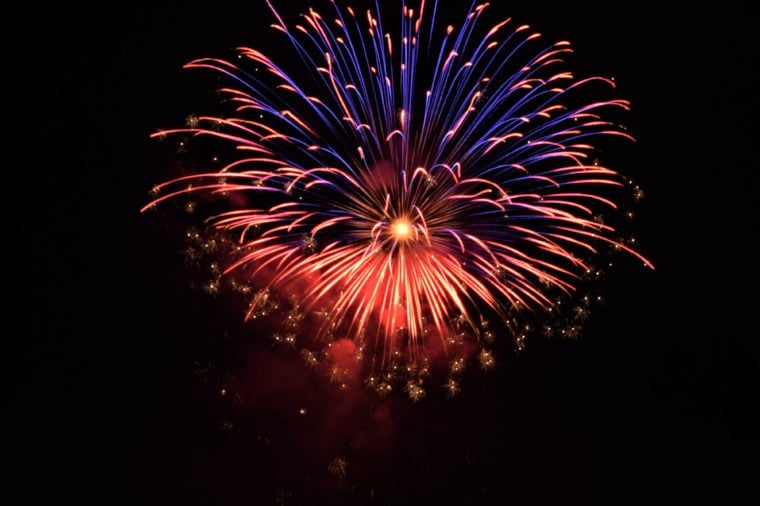 The gateway to Rocky Mountain National Park is the perfect base for visitors’ July Fourth getaways. This mountain town has a car show, a patriotic concert, and the “Big Bang” concert, this year featuring a Beatles’ tribute band and an Andrews Sisters-like harmony singing trio, lead up to the main event. Put your blanket down in Stanley Park, along Lake Estes Trail, or near the marina for the best views of the spectacular display over Lake Estes—but really anywhere you can see the lake, you can see the show. If you’re on a trail, be sure to bring a flashlight for the walk back. 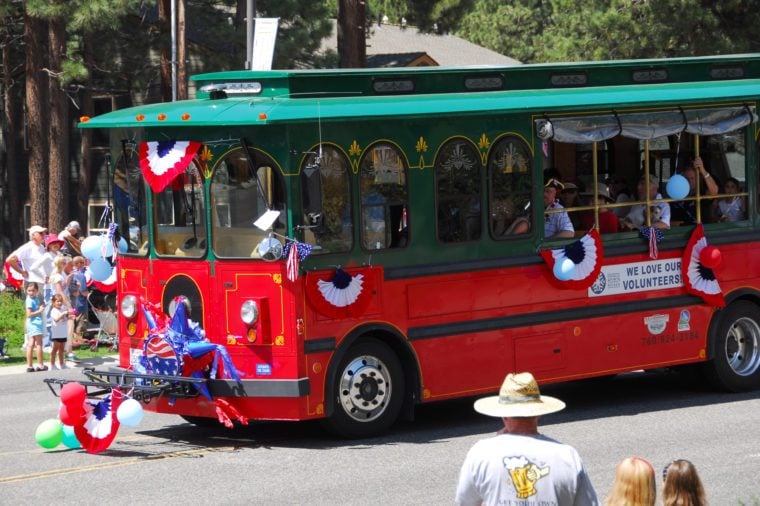 Believe it or not, you can actually spend July Fourth skiing at Mammoth Mountain in the Sierra Nevadas. If that wasn’t enough of a draw to get you to this scenic location for Independence Day, there’s also a parade, a concert featuring a 40-piece orchestra, and, of course, the fireworks show itself. The stunning “Sky Concert” features more than 700 shells for exploding for 20 minutes over Crowley Lake. For more pyrotechnic spectacles, check out the best Fourth of July fireworks in every state.