10 Bra Myths You Can (and Should) Ignore

Don't let these age-old bra myths keep your girls from getting the support they need. Our experts weigh in on what's true, what's false, and what's just downright silly. 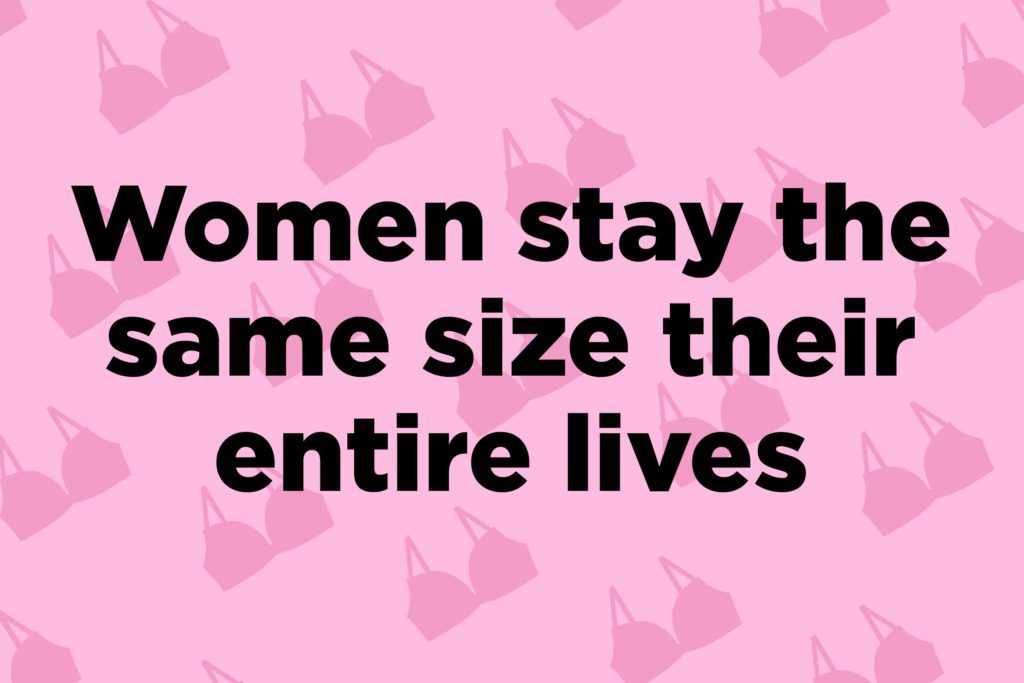 “I can’t tell you how many women have told me they’ve been wearing the same size for 20 years,” says Jene Luciani, author of The Bra Book. “You have hormones, you are aging, you are losing and gaining weight, and all of these things affect your bra size!” Luciani also says that even a small weight gain or loss can affect bra size. She suggests yearly fittings to make sure your measurements haven’t changed. Here are the signs you need a new bra. 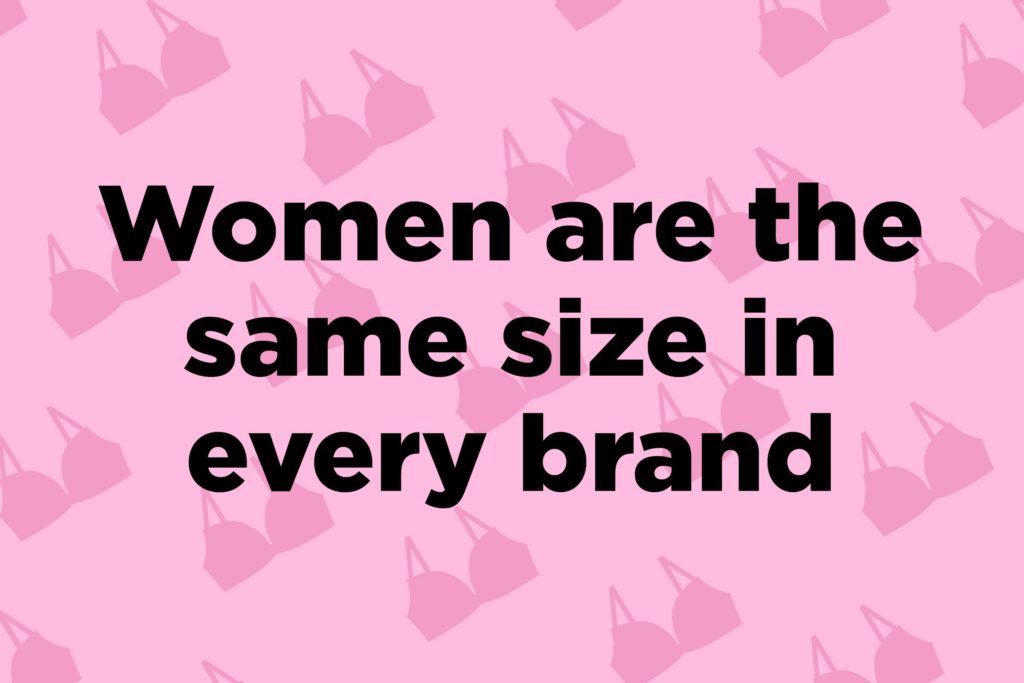 This is a big misconception. Paul Tutela, MD, a board certified plastic surgeon practicing in New York, warns that bra sizes aren’t even consistent within the same brand. “Sizes are not universal ,” he says. “You really have to start fresh with each brand.” These are the essential bras every woman needs in her wardrobe. 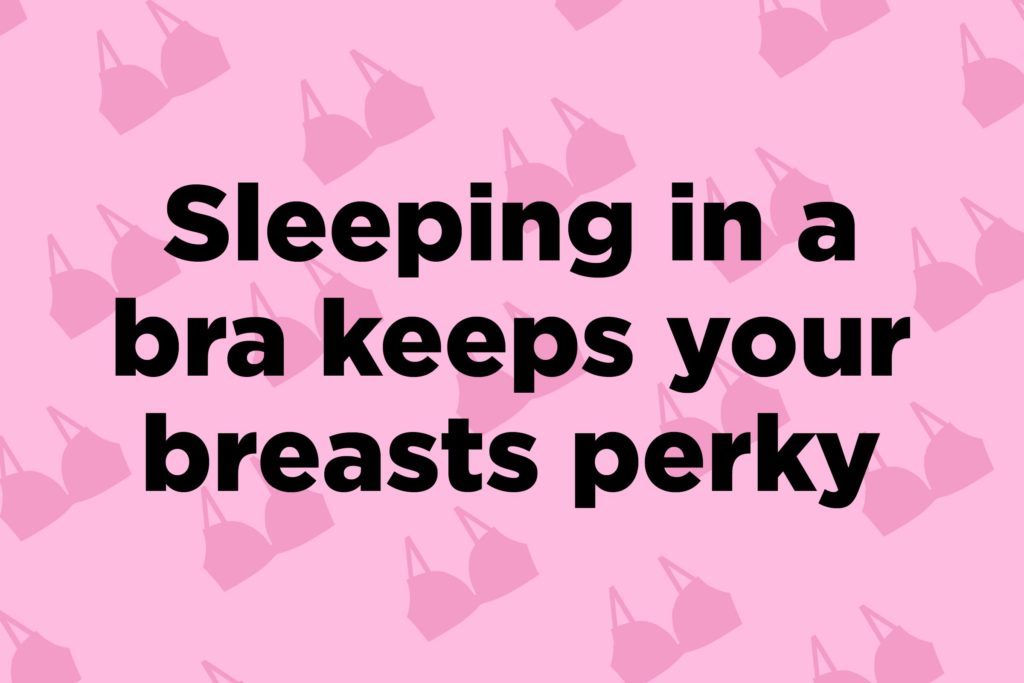 No way, says bra expert Natalee Woods, whose upcoming book Boob Job: The Ups and Downs of Department Store Bra Fitting documents Woods’ own experience fitting women for bras. “I wish that was the case; I’d pack on five before bed,” shares Woods. “The only thing that keeps the ladies up and at ’em is a proper bra fit and a cosmetic surgeon.” Find out: Is it actually unhealthy to sleep in an underwire bra? 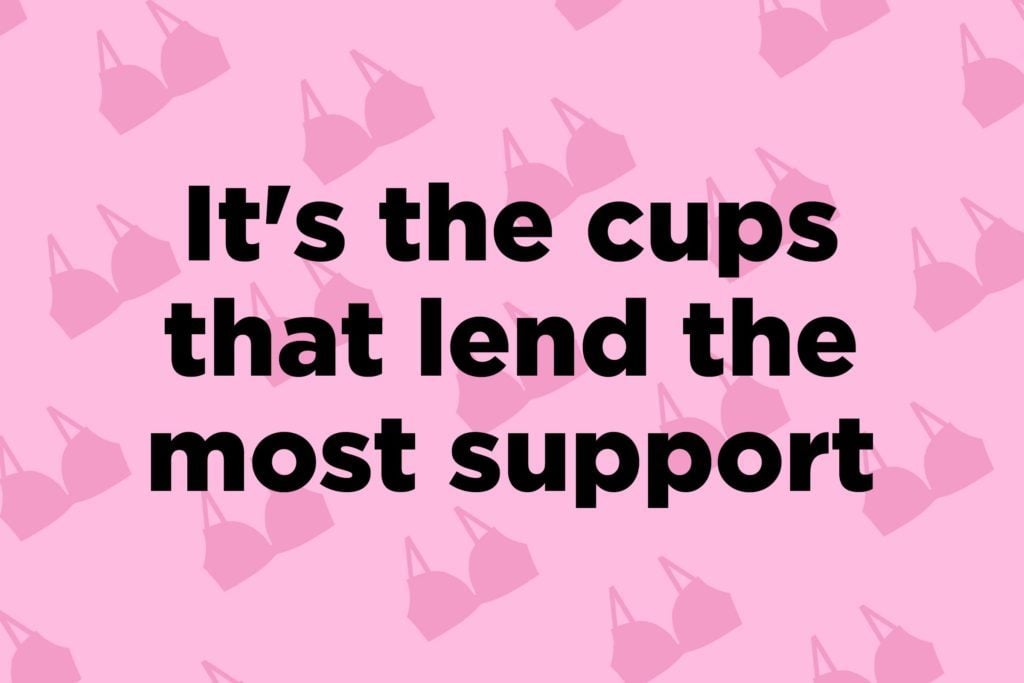 Woods says that it’s actually the bra band. “It’s definitely not the cups, or the straps, but the bras’s band,” says Woods. “The band truly offers most of the support—if not all.” Tutela also says that it’s important to think about function. “You need to start with the activity you want to do when you’re wearing the bra,” he says. “Usually something less constricting for when you’re going out, and a sports bra to support whatever activity you’ll be doing during the day’s workout.” This is what your bra choice may say about your personality. 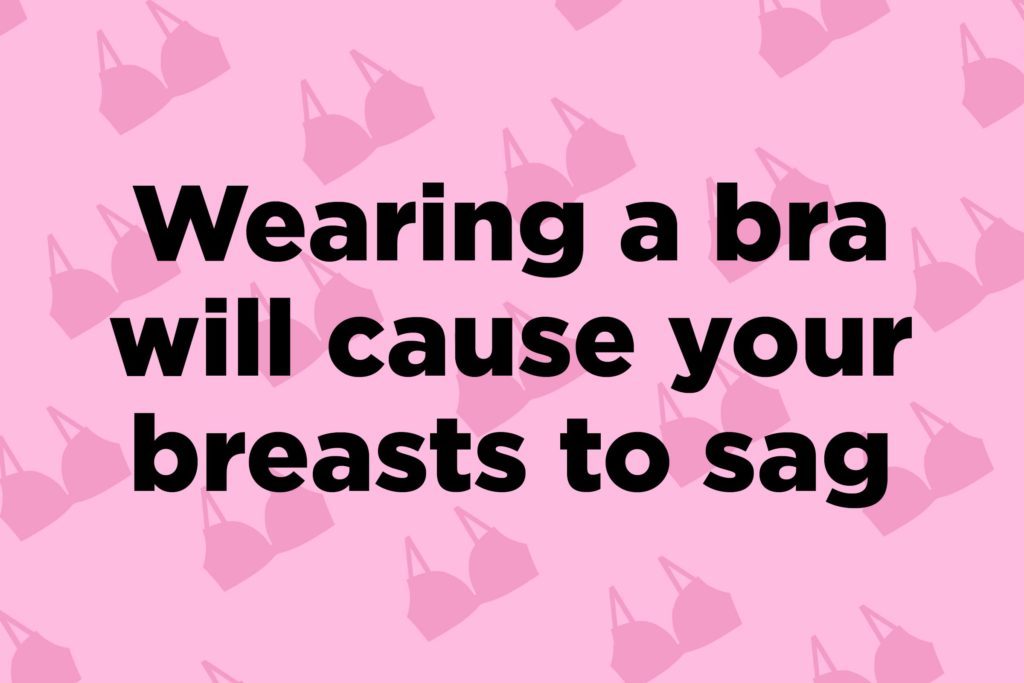 On the other side of the spectrum is the myth that wearing bras causes breasts to sag. “There was a ‘study'” of a relatively small sampling of women that claimed to show that the women who wore bras their entire life had more sagging than women who didn’t,” says Luciani. The problem is that the study used a relatively small sample of women and did not take into account genetics, pregnancy, or age. Tutela adds, “Good support actually helps to prevent sagging, which I know is important to a lot of women. Skipping a bra too much will impact that.” 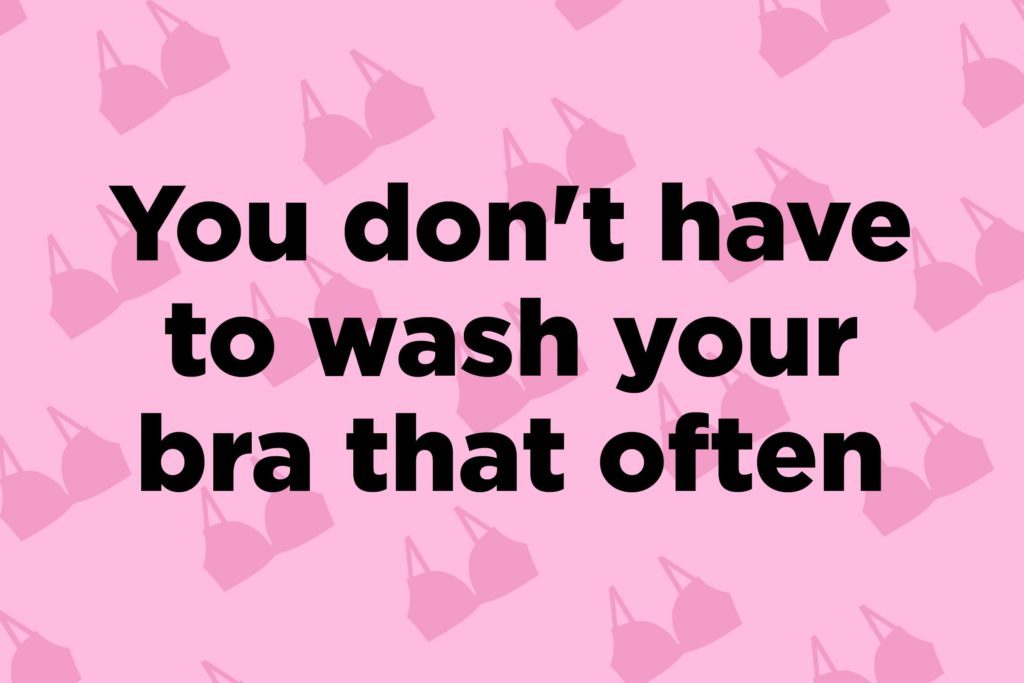 Even though women wear a bra right next to their skin, there’s the belief that you don’t have to wash your bra that often. “Wrong. you should actually wash it after every wearing if you want it to last,” says Luciani. “The dirt and oils in our skin can break down the elasticity in the fabric, so it’s important to wash your bras regularly.” Use these tips to simplify laundry day. 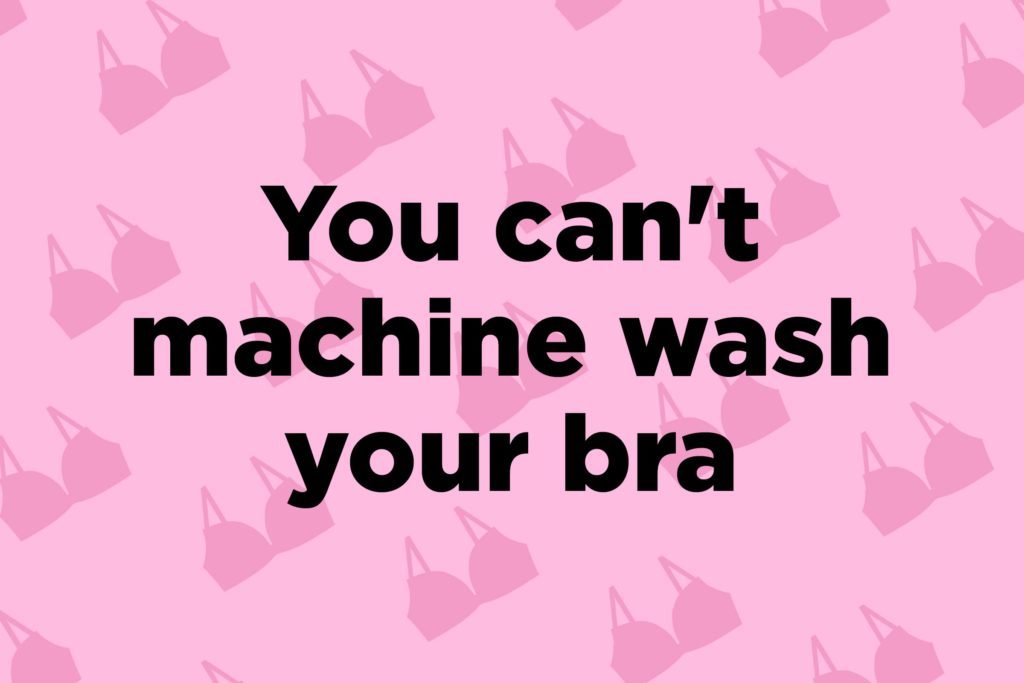 Bra myth about the washing machine:

People may skip regular washings because they’ve heard that you can’t wash bras in the washing machine. Not so, says Woods. “Lingerie bags are the best,” she says, “They really protect your bras. Hand-washing your bras is great too, but why not throw some in the wash when you can?” 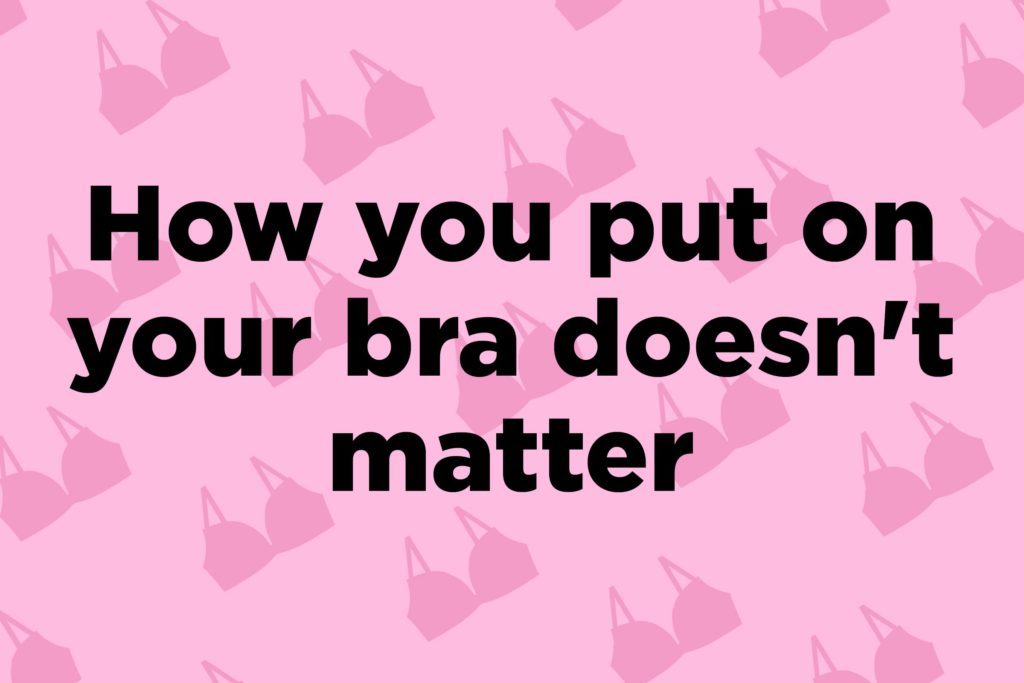 Bra myth about getting dressed:

This one is especially surprising. “I like to have women bend forward a bit so all their breast tissue goes forward,” Luciani. Then reach around and clasp the bra, and scoop breast tissue into each cup; stand up, and adjust the straps. “You will see a difference, trust me!” he says. And Tutela reminds us that if it’s not comfortable, it probably isn’t fitting right or isn’t the right size. These are the signs you’re wearing the wrong bra. 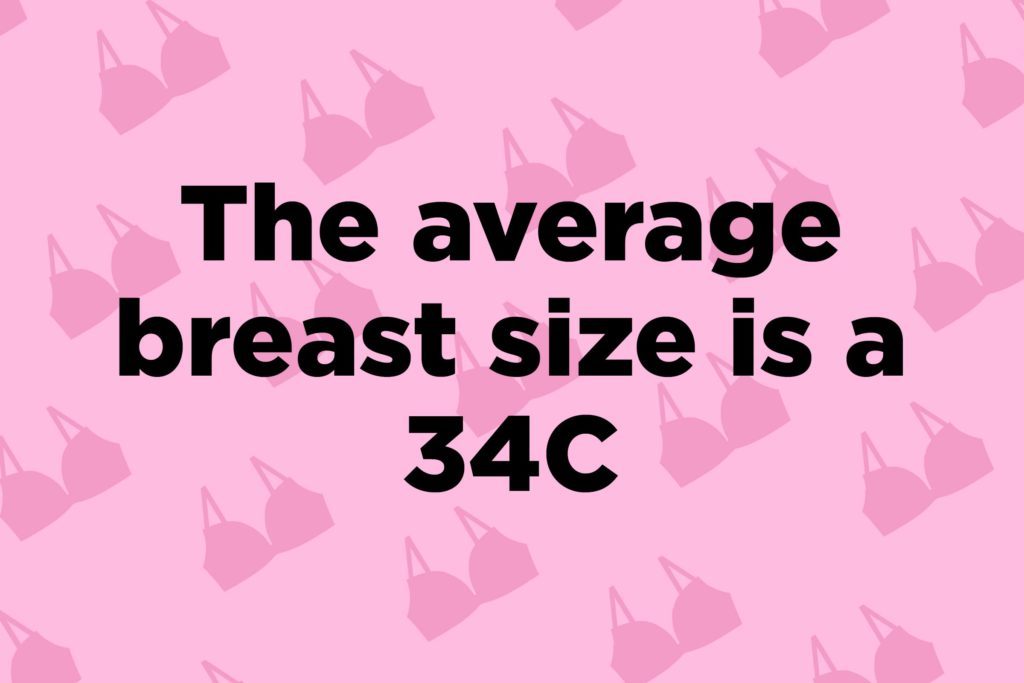 After having fit bras for women for over a decade, Woods says there is no such thing as an average bra size. “For years—and on a daily basis, I fit women for every size starting from A all the way up to J,” she says. “Variation is the only thing that’s consistent, giving zero validity to an “average” bra size.” So stop worrying that you don’t measure up. 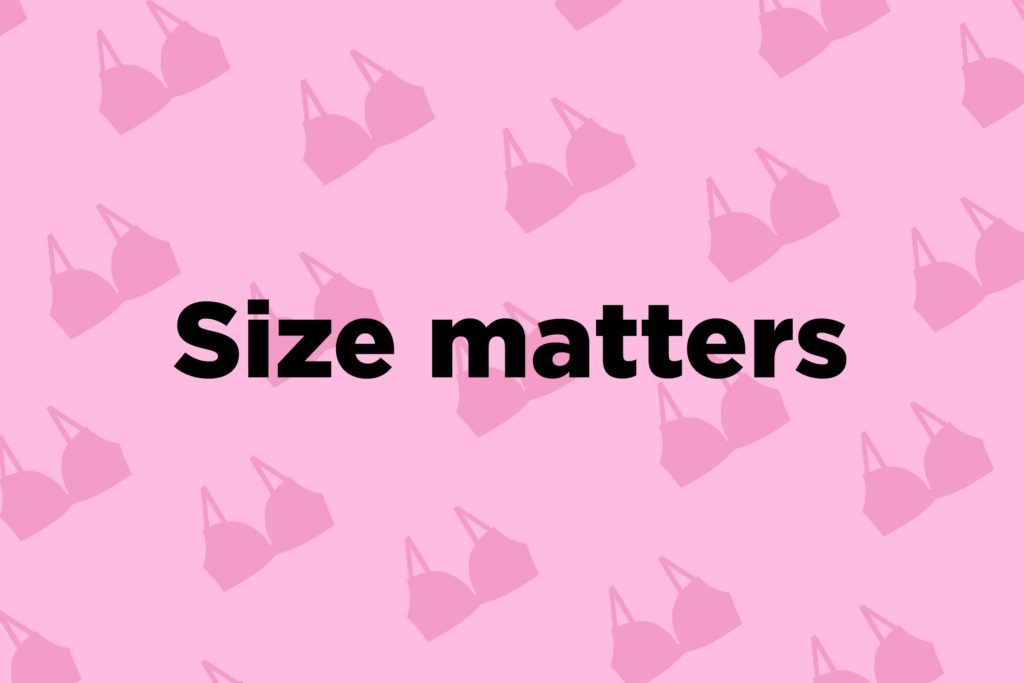 Bra myth about size and fit:

Don’t get hung up on bra size. It’s the fit that matters most, says Woods. “Every bra runs differently. Some bras will work for your body type and others won’t. Be flexible!” Borrow these body-confidence tricks from plus-size models to feel like a million bucks no matter what your shape or size.

Felissa Benjamin Allard
Felissa Allard has worked at The New York Daily News, Health, Life & Style, About.com and more. As a freelancer, she has had pieces published on What To Expect, SELF, Good Housekeeping, Cosmopolitan, Modern Mom, Working Mother, and more. Her specialities are beauty, fashion, health, wellness, and parenting.