Keep or Toss? Your Go-To Guide on Clearing Out All Kinds of Clutter

From year-old receipts to the "good" half of a moldy bread loaf, our homes are full of objects we're not sure if we should save or scrap. Here are expert verdicts on what to keep, what to ditch, and how to trash things the right way. 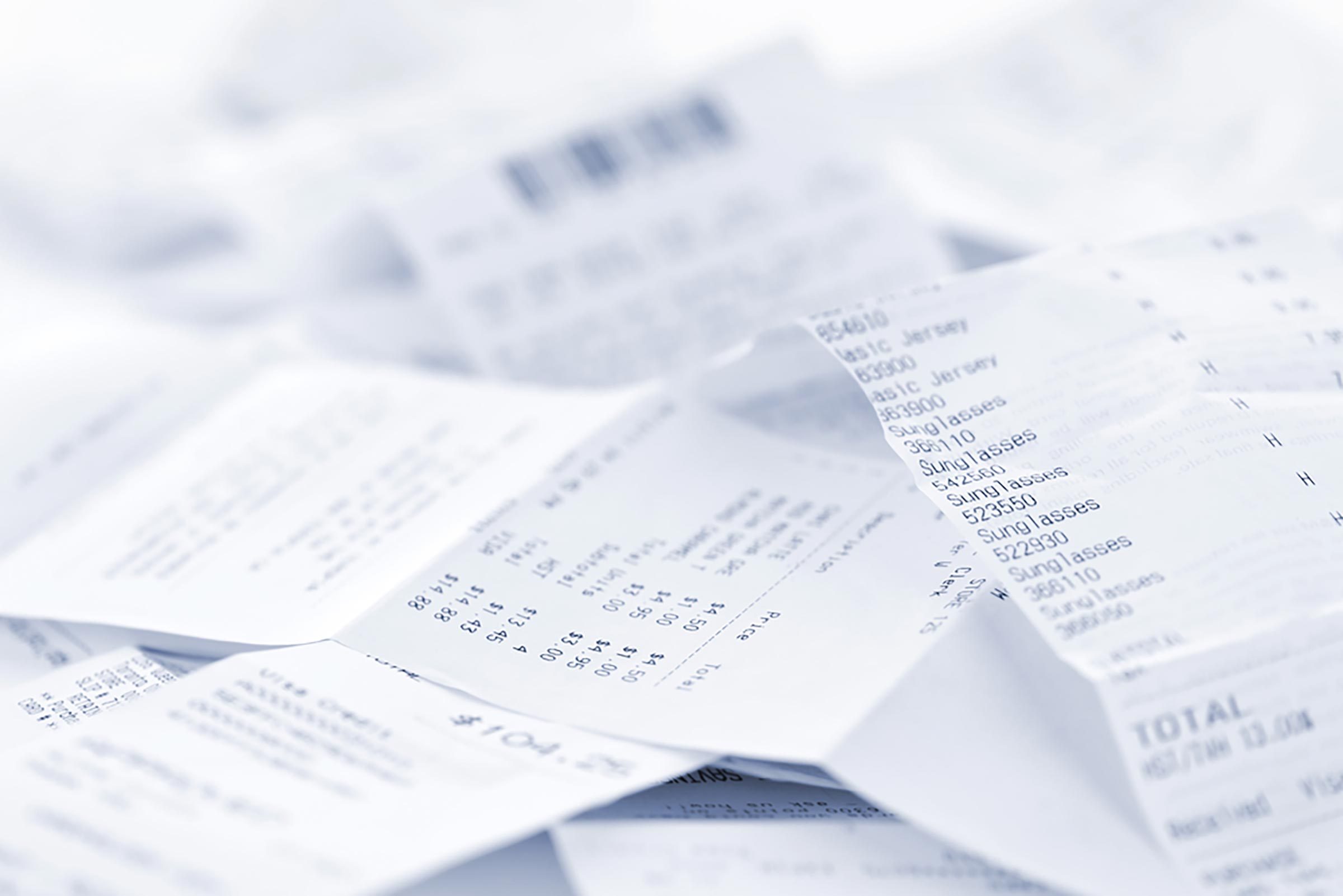 When it comes to things people hang onto because they’re afraid they might need them someday, receipts near the top of the list. Kim Cossette Andre, founder of The Organized Approach in Atlanta, suggests, “Start by separating your receipts into two piles: those that support a tax deduction and those that don’t.” Put receipts related to taxes in boxes labeled by year, and keep each box for seven years before getting rid of it (double check with your accountant to see if he or she recommends a different time frame for you). Another kind of receipt to keep is anything related to large purchases such as major appliances (hang onto those for the life of the item) or any major work done to your home (keep until you sell the house). When it comes time to dispose of those sensitive scraps of paper, says Andre, take them to an office or mail store, which often offer shredding services, or find a shredding service that will come to your home. As for receipts for shoes, toys, and other small purchases: “If there’s no detailed account information, it’s fine to just toss it,” Andre says. 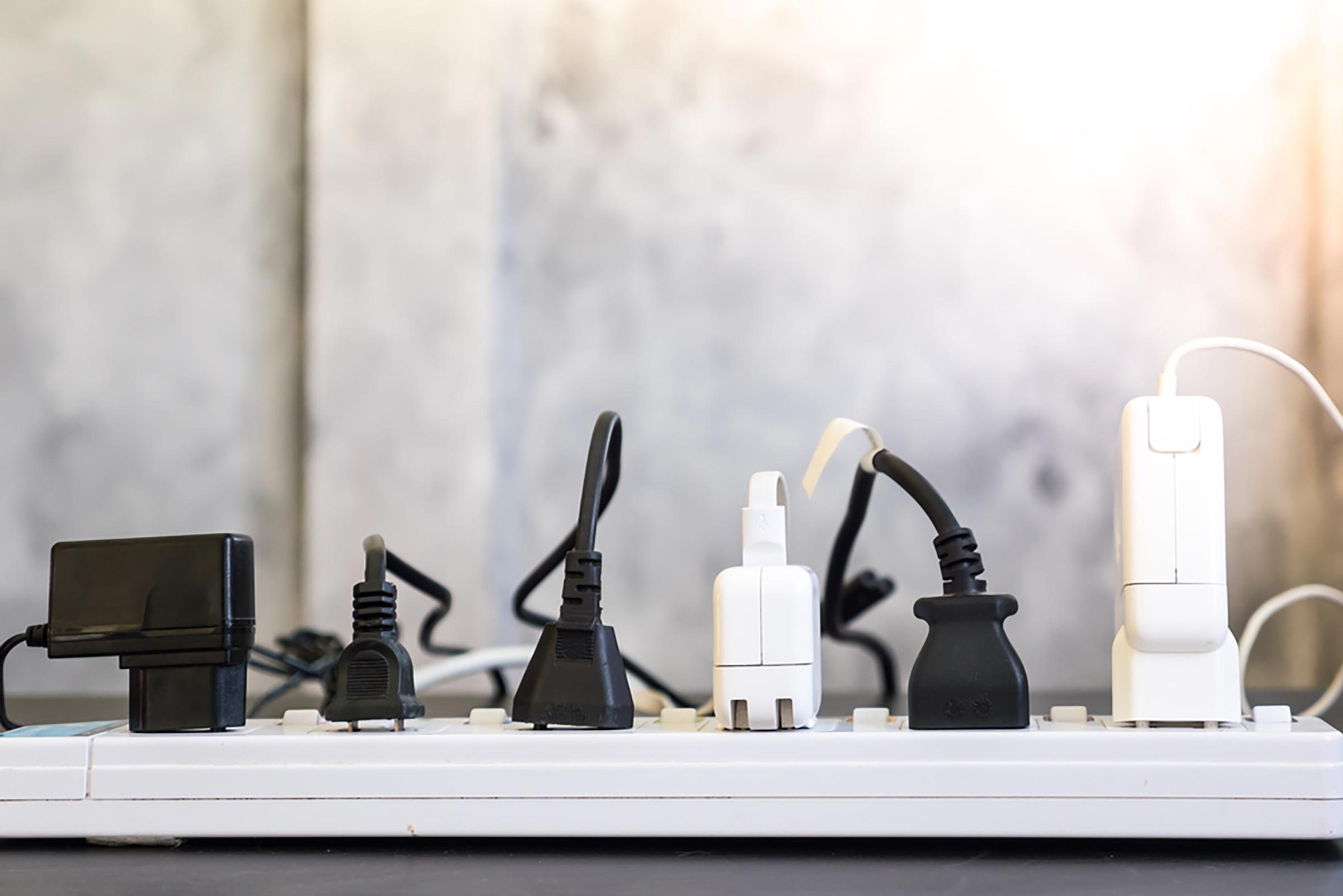 Many of us have boxes of mystery electronics—cords, old chargers—that we can’t figure out what to do with. “If you don’t know what that tangle of stuff is for, but all the precious electronics that get you through your day are up and running, those mystery items might be unnecessary,” says Andre. Still, she sees clients fearful of letting them go in case they wind up needing them later. “So I suggest boxing it all up and putting a date on it you’re comfortable with—one month, six months, a year—then waiting. If you haven’t gone digging in the box looking for something by the time that magic date arrives, you can comfortably let it all go.” As for how to dispose of electronics: Check your municipality to find out what recycling options are available, turn to big box stores like Best Buy, which often have recycling drop off’s, or look up online listings like Earth911. Speaking of electronics, discover 14 genius uses for that old cell phone. 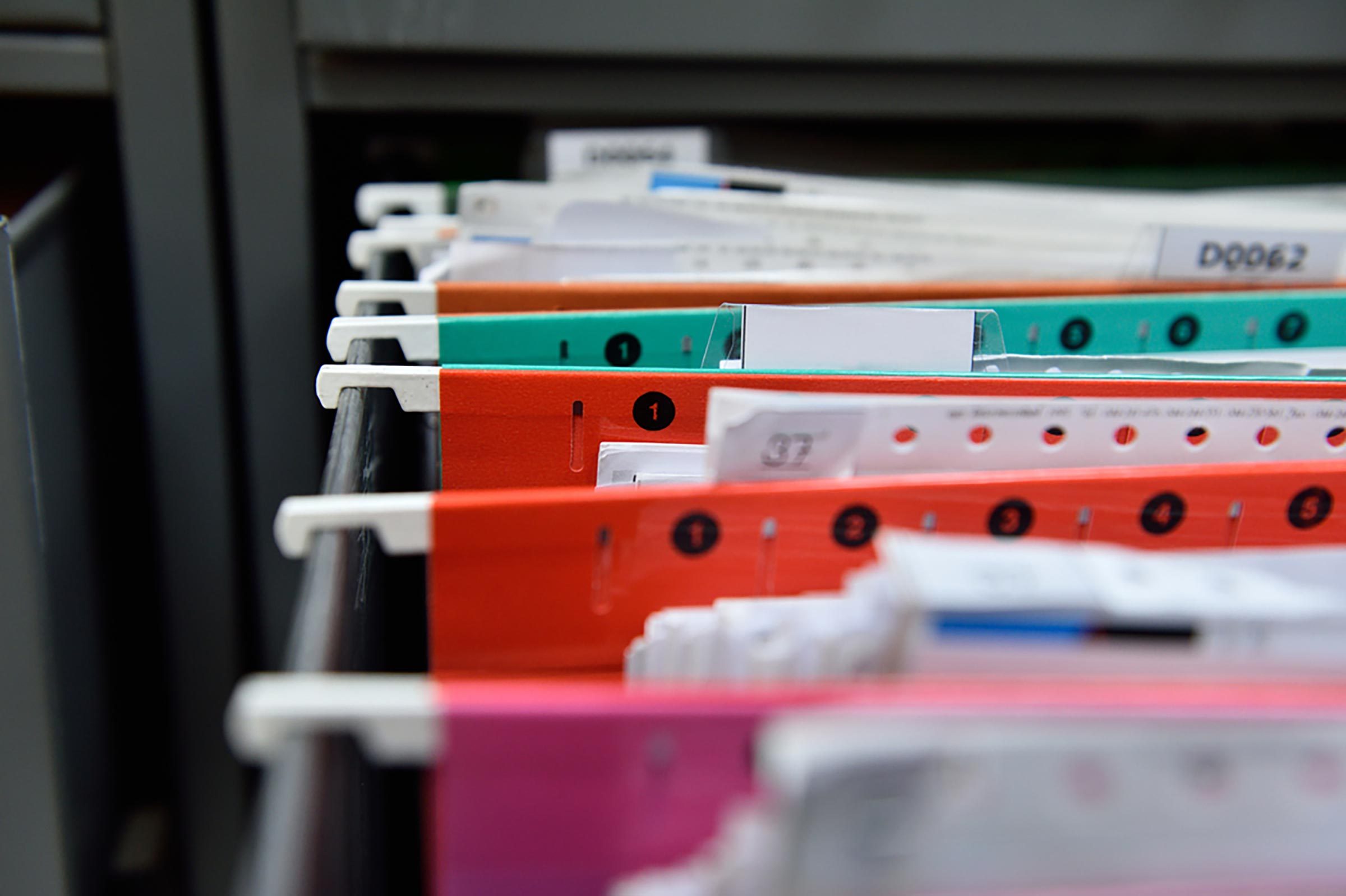 How about those home office cabinets stuffed with everything from bank statements to user manuals? “Regarding paper, the big question is: How easy is it for me to put my hands on this information somewhere else?” Andre says. So if your bank statements are available online or if your new printer’s user manual is on the manufacturer’s website, “there’s no need for you to hold onto paper versions of that information.” 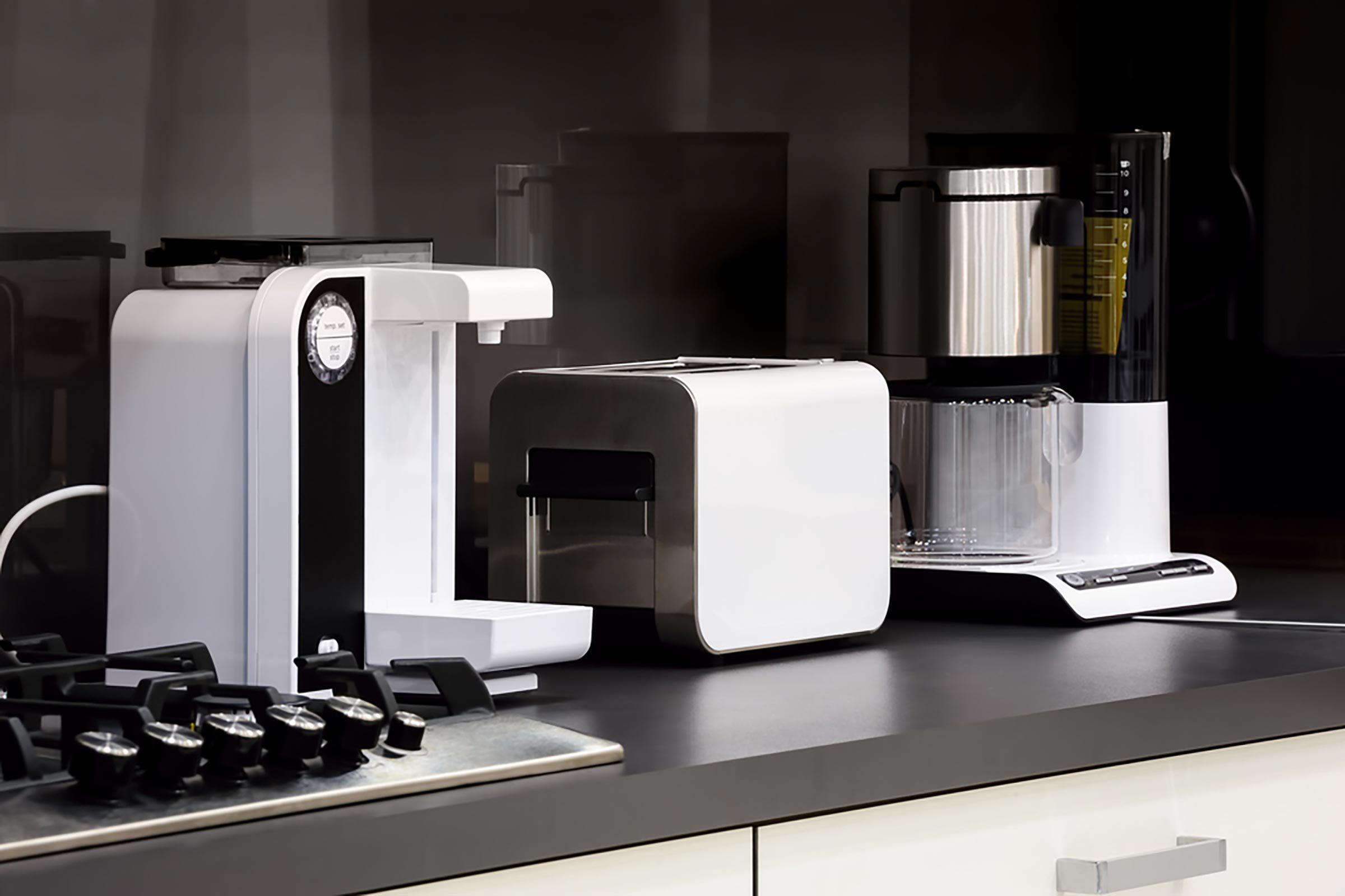 From lipstick that’s the wrong shade to a specialty kitchen gadget that’s drifted to the back of the drawer, we all have almost-new items we never use, but don’t have the heart to part with. “It’s hard to let go of something you spent money on when it still has dollar value—but if it’s just taking up your space, it’s not of value to you,” says Andre. “If your goal is to only hold onto things you need, use, and love, then be brutally honest and say, ‘The money is spent, but I’m not using this item, so I’m letting it go.'” Andre suggests taking such objects and “gifting them forward,” by sharing cosmetics with a friend or looking for a community cause that could benefit from a donation. “It’s about finding the right match of who can enjoy this item next.” Or you can try selling it on Facebook Marketplace. 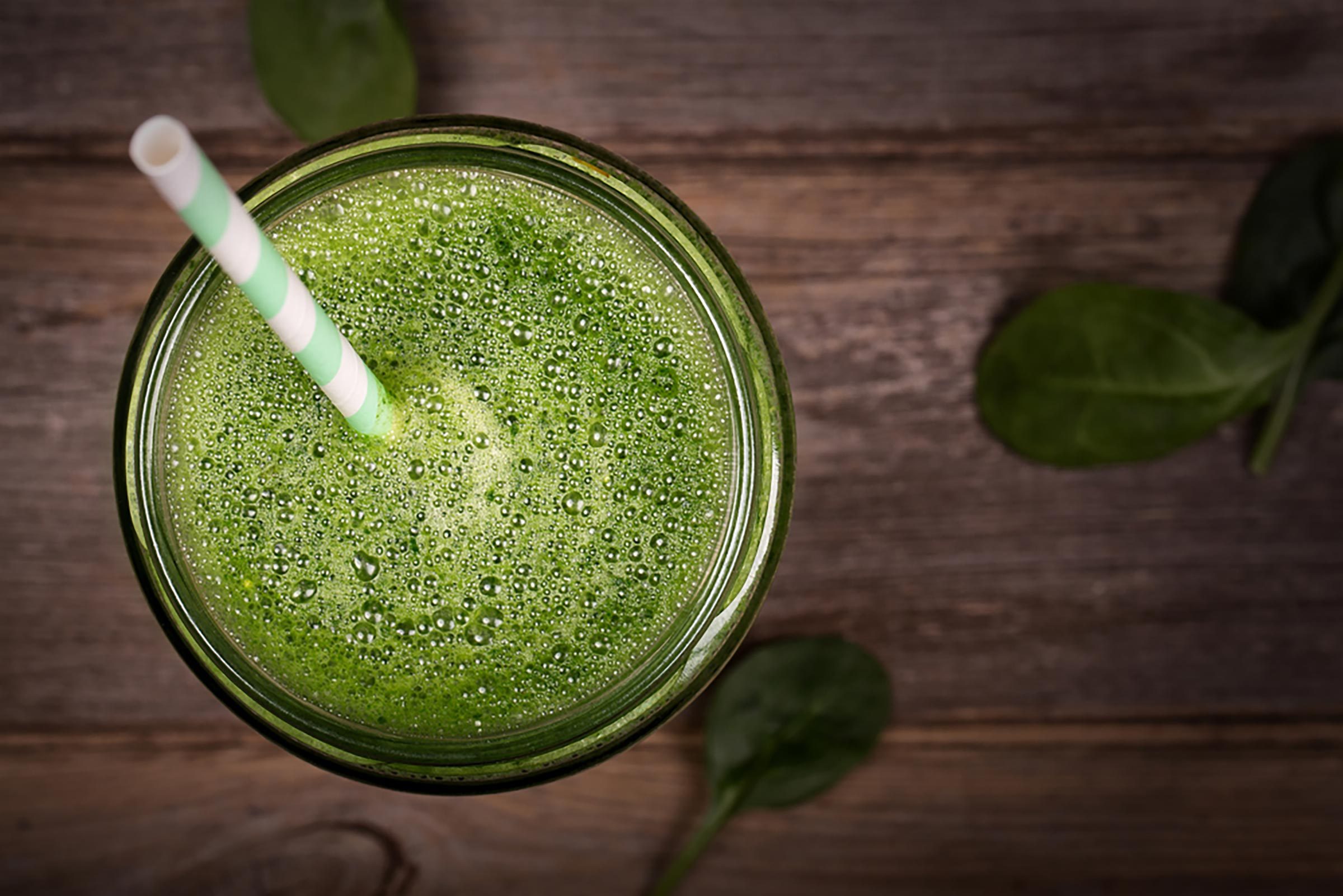 In the kitchen, people often ditch certain foods not realizing they could be kept and enjoyed. “There’s undeniably a lot of food waste,” says Libby Mills, spokesperson for the Academy of Nutrition and Dietetics and a Philadelphia-area food coach. “If you know the facts, there are lots of things you don’t have to toss.” For example, if your greens are looking too wilted for a salad, they can still be used in other ways: Heat them into a sautéed spinach side, add them to pasta primavera, or blend them into a smoothie, Mills suggests. If your bunch of bananas is browning faster than you can finish it, before they go completely bad pop them in the freezer. “Later they could be peeled and added to quick breads or pancakes, thrown into a smoothie, or blended into a homemade banana whip for dessert.” Veggies starting to look sad can also get a second chance. Mills suggests starting a “stock back” in your freezer: a sealable, freezer-grade bag that becomes a catch-all for veggies as they pass their peak. “Those withered cherry tomatoes, a clove of garlic that’s less than fresh, perhaps some mushroom stems—all this equals flavor and nutrition that can be incorporated into homemade stock or broth later.” 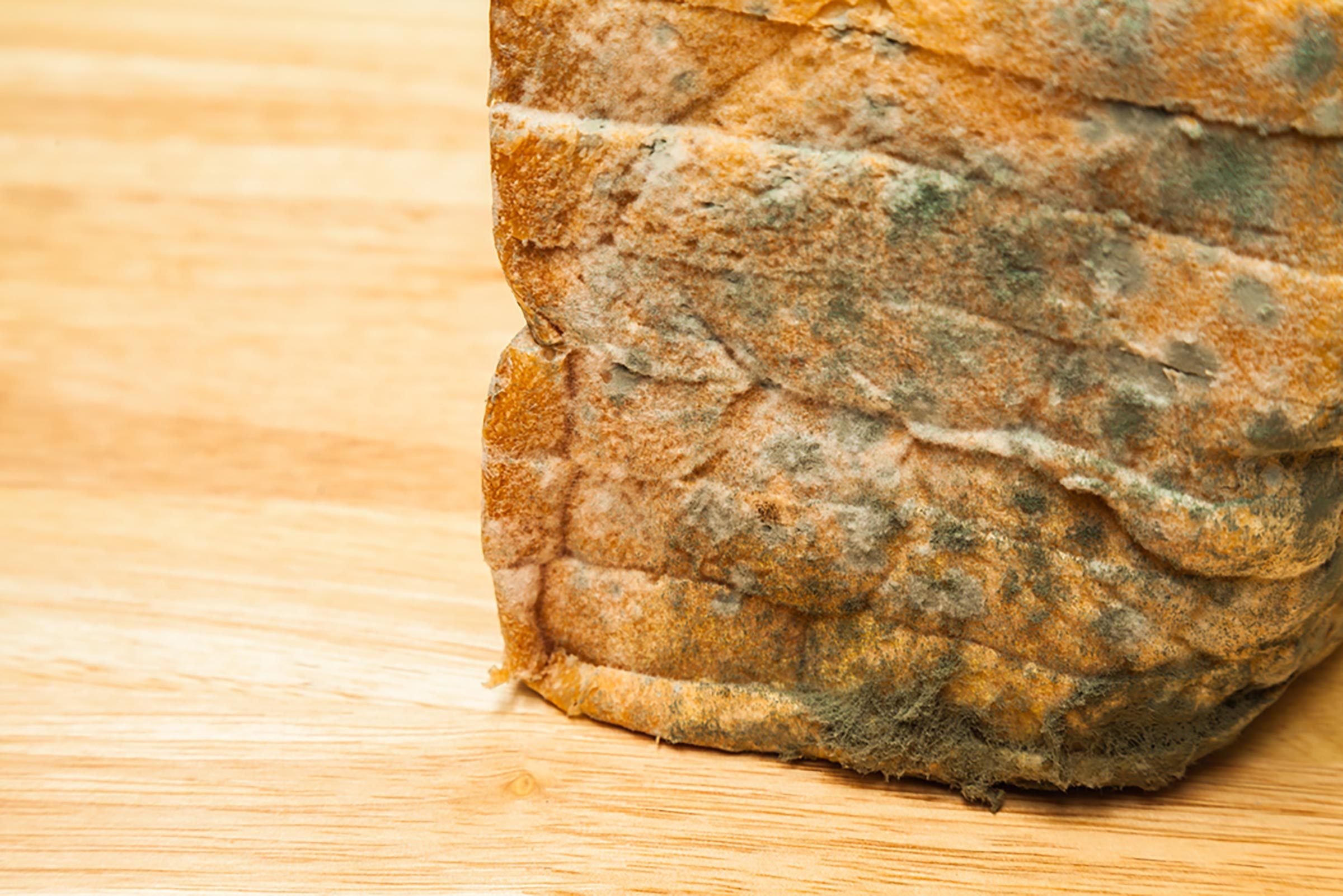 Foods that are partly moldy-partly good

When part of a bread loaf develops mold, food experts warn against salvaging the rest of it. “We don’t recommend cutting mold off of bread, because it’s a soft food,” Marianne Gravely, a senior technical information specialist for the United States Department of Agriculture (USDA) told National Public Radio (NPR). “With soft food, it’s very easy for the roots [of the mold], or the tentacles, or whatever creepy word you want to use, to penetrate [deeper into the food],” she explained. Gravely added that eating moldy food could lead to respiratory problems and allergic reactions. Inhaling mold could also be dangerous. “To avoid breathing mold, the USDA recommends putting food in a plastic bag and then in a covered trashcan, out of the reach of children and animals,” NPR reports. On the other hand, tougher foods invaded by mold—such as hard cheeses and carrots—are salvageable because their surfaces are harder for mold’s roots to penetrate. “For such foods, Gravely recommends cutting the mold out with a clean knife, allowing an inch of buffer on each side of a fuzzy patch,” according to NPR. 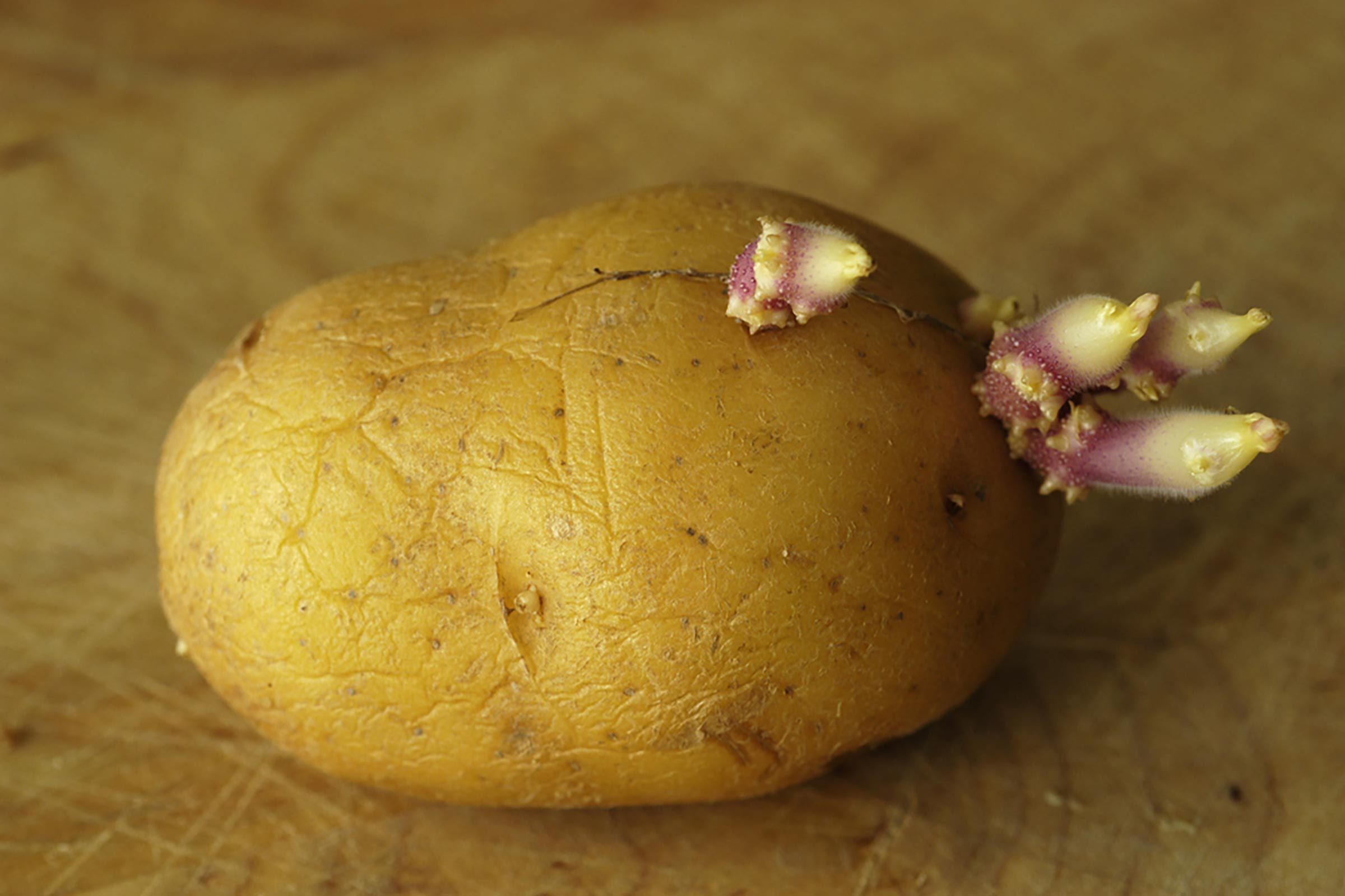 Potatoes that have sprouted

While your mom might tell you to toss a sprouted potato, you’d be wasting good food if you did. “If you’re seeing sprouts, just cut them off,” says Mills, explaining the rest of the potato is still edible, it’s just lost some nutrients that would have been yours to the sprout. However, at a certain point you’ll need a different approach, Mills adds. “If you start seeing a mini plant growing in your pantry, you may as well find a spot in your garden, plant it, and wait for the real harvest.” Here are seven foods you should never eat past the expiration date. 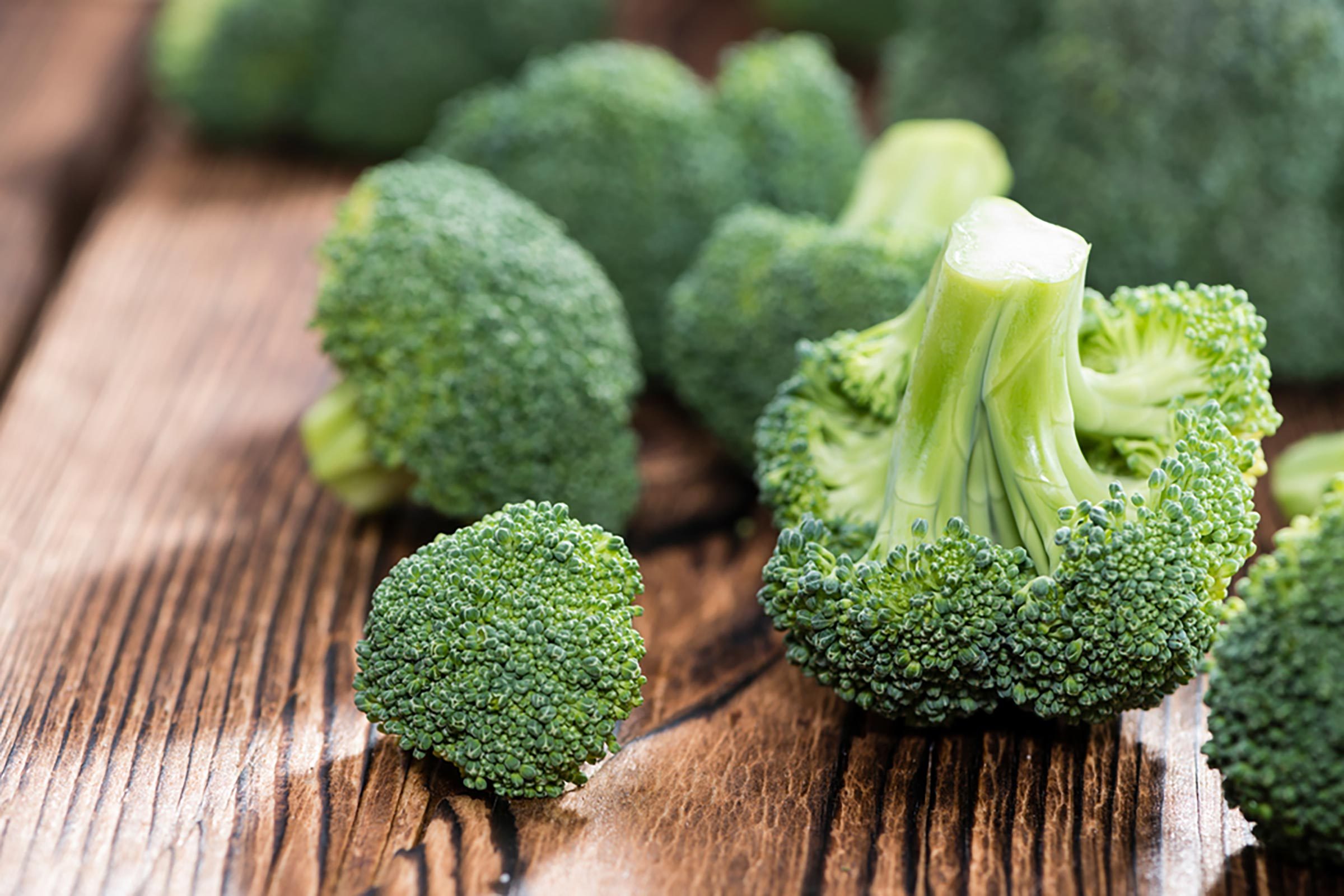 If you love cauliflower and broccoli florets but toss the stalks, you’re missing out on some worthwhile nutrients, says Mills. “The stems of cauliflower and broccoli are completely edible. Peel off that tough fibrous outside—otherwise you’ll be chewing for a while—and grate them into a slaw, slice them for soup, or simply steam them with the florets for a side dish.” Instead of tossing celery leaves, “they’re a lovely ingredient you can chop like parsley and add to a salad.” And before you peel a citrus rind you might normally discard, “Zest the rind, and keep the zest in a freezer bag for adding to holiday cookies or salad dressings—you could even add a touch of lemon zest to a sauce for pork.” 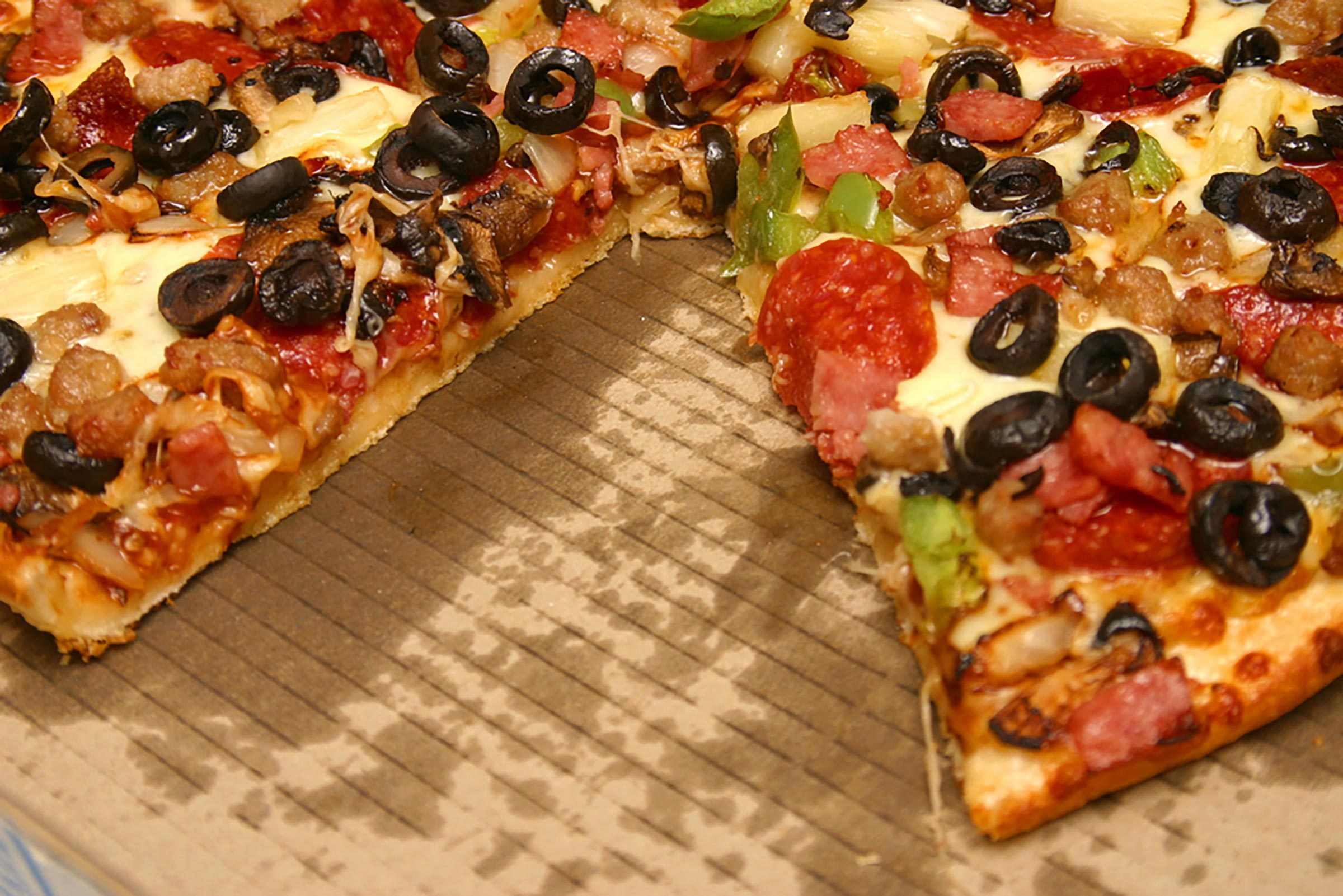 For certain household items, the problem isn’t whether or not to toss them, but how. There are a number of objects that are often disposed of improperly, and pizza boxes near the top of the list, says Kevin Kraushaar, interim CEO of the National Waste & Recycling Association. The box itself is recyclable, but if there’s leftover food stuck to it or grease soaked into the cardboard, it’s no longer recyclable because it contaminates the recycling stream. Similarly, if you throw containers for food or liquids in the same recycling bin with mail and newspapers, and those papers become soiled or moistened, they are no longer recyclable. “Most everybody wants to recycle and do the right thing, but they’ve got to realize that contaminants in the system can cause so many problems their recycling efforts could end up being meaningless,” says Kraushaar. “So make sure recyclables going into the bins are clean and dry.” And greasy, cheese-smeared pizza boxes that can’t be cleaned, unfortunately need to go in the trash. Check out these simple ways to reduce your carbon footprint.

If your municipality doesn’t offer plastic bag recycling, but you toss plastic shopping bags or dry cleaning bags in your bin anyway, you could be causing real problems. “Plastic bags and dry cleaning bags can really gum up the works at the sorting facilities,” says Kraushaar. It’s possible for plastic bags to get caught in the belts, stopping a machine for hours while the situation is repaired. Instead of being the reason for such delays, if your municipality doesn’t accept plastic bags, take your old shopping bags back to the grocery store, which frequently provides recycling for them.

Even if you’ve properly disposed of the prescription pills themselves, that empty plastic bottle can’t go in your recycling bin. “Prescription drug bottles are generally not recyclable because of the residue of the drug inside the bottle and because of the orange tinting most bottles have to keep the sunlight out,” says Kraushaar. Instead, talk to your local pharmacist to find out the best means of disposal. Or try one of these eight brilliant ways to reuse empty pill bottles.

Standard AA batteries should never be thrown in the trash for reasons including environmental concerns, and many municipalities don’t recycle them because the process is highly specialized. Other types of batteries, such as the lithium-ion variety, are additionally unsuitable for your regular trash or recycling containers because they could spark fires under certain conditions, says Jessica Mayorga, senior director for communications and marketing for the National Waste & Recycling Association. In order to dispose of batteries the right way, look to electronics stores like Best Buy, which have programs to receive batteries, or turn to online resources like Call2Recycle, which provides state-by-state listings of specialized recycling resources.

Minimize your household’s keep-versus-toss decisions by minimizing what you buy in the first place. “Decide how you want your space to enhance and support your life,” says Andre. “Once you know the purpose of your space and you’ve built that picture in your mind, before you head to a store make a contract with yourself that you won’t welcome anything into your world that doesn’t fit that purpose.” Mills agrees that buying smart is the first step to lessening waste. At some point in the week—maybe Sunday afternoon—make a plan for three or five dinners you’ll have that week, then make a grocery list accordingly, she suggests. “Having a plan helps you avoid overspending and also means you come home with just what you need instead of spur-of-the-moment buys that you find rotting a week later at the back of your produce bin.” Check out these incredibly easy-to-make dinners for busy nights.