13 Crowded Destinations That Are Still Worth Visiting

Popular places are popular for a reason, after all. Scroll ahead for the full rundown of crowded destinations that are still totally worth visiting. 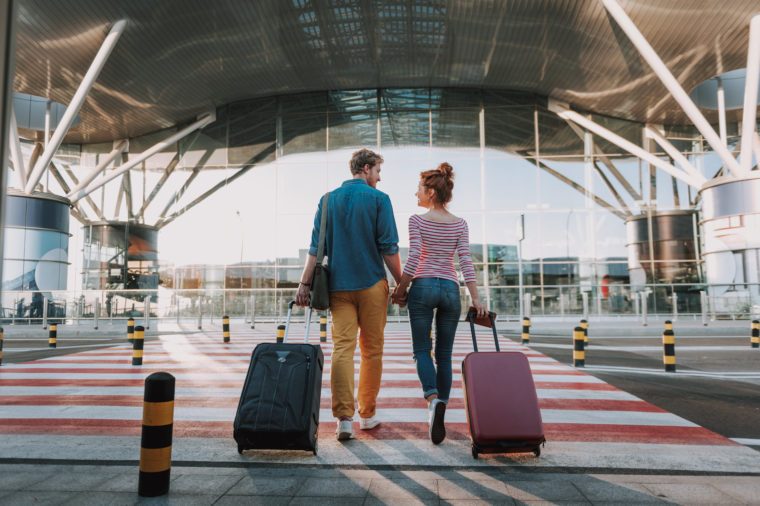 We’re not invalidating the problems that arise as a result of over-tourism—which is a serious threat to travel as we know it—and certainly wouldn’t judge you for skipping perennially popular spots, opting instead to seek out off-the-beaten-path gems. But, as a counterargument, consider that there’s a reason certain locales happily continue to welcome a never-ending stream of travelers from around the world. To write-off perpetually busy places altogether would mean passing up the chance to experience the extraordinary wonders of Paris, London, Marrakech, and more. Traveling off-season can help you beat the crowds when you visit these popular destinations. 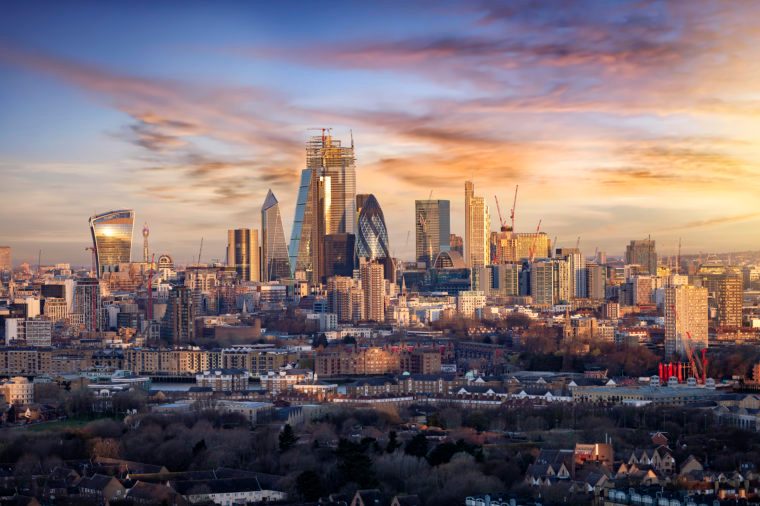 The urban sprawl of Greater London stretches for miles in all directions and from Mayfair to Shoreditch, each district depicts a different side of the Big Smoke. Contained within this megalopolis are traditional pubs, upmarket shops, landscaped parks, and more must-see sights than it’s possible to rattle off in a single article. A reflection of the ongoing fascination with royals, Buckingham Palace and Westminster Abbey (Britain’s coronation church since 1066) draw huge crowds. Visitors also flock to the London Eye, Borough Market, and the Tower Bridge. You could spend months, realistically even years, in England’s capital and not even make a dent in the lengthy list of the things to see and do. London bound? Here’s how to avoid the line at popular tourist attractions. 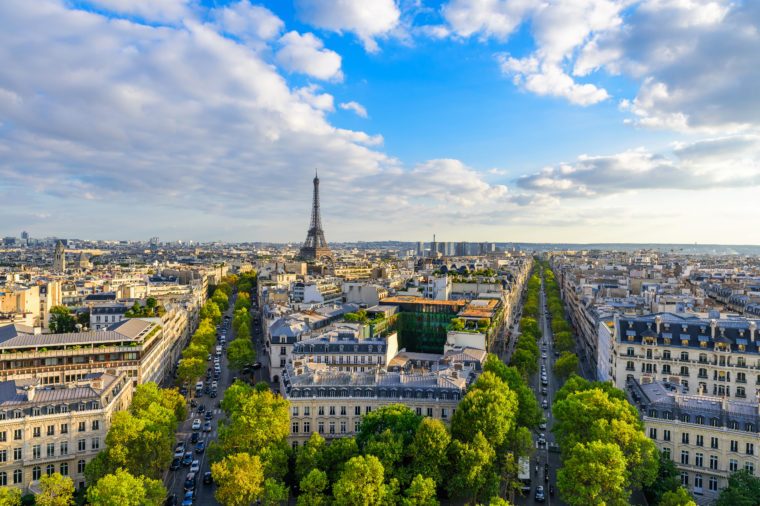 According to Tripadvisor, Paris is the second most popular destination in the world behind London. To be honest, we weren’t entirely—alright, even a little—shocked. The inspiration for countless classic films, books, and songs, there’s nowhere else like La Ville Lumière. Paris has more culinary, artist, sartorial, and cultural clout than any other city on the planet. Its arrondissements showcase leafy boulevards, patisseries, chocolate shops, wine bars, cafes where chic Parisians sip un café, Michelin-starred restaurants, world-class museums, manicured gardens, and boutique hotels. Monuments such as the Eiffel Tower and the Arc de Triomphe are instantly recognizable. And every famous fashion designer occupies prime real estate along Rue du Faubourg Saint-Honoré which makes for world-class window shopping. You’ll want to commit these essential French phrases to memory before you go to Paris. 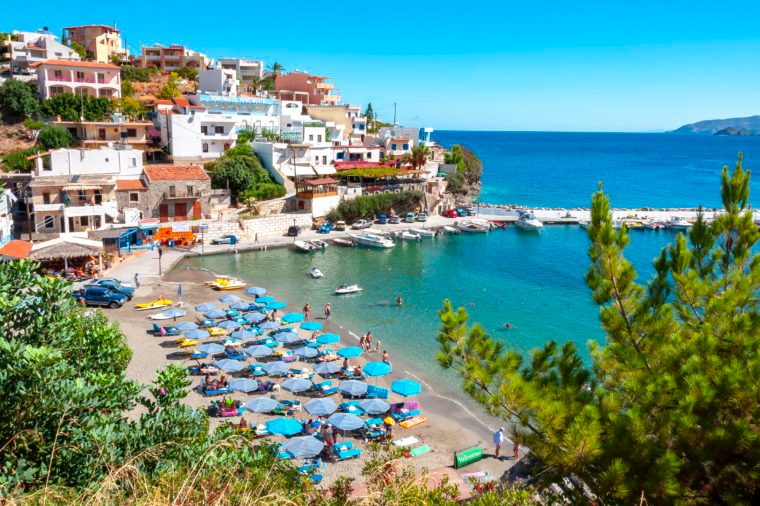 Santorini and Mykonos are undeniably buzzy, but there’s no competing with Crete. The remarkable contributions of Greece’s largest and most populous island date back thousands of years. Once the epicenter of the Minoan civilization, which flourished during the Bronze Age, Crete brims with fascinating archaeological sites—most notably Knossos, Phaistos, Malia, and Zakros. While the Heraklion Archaeological Museum displays a magnificent collection of millennia-old artifacts. Fans of Greek mythology can visit Ideon Cave, the mythical birthplace of Zeus. History aside, Crete is outstandingly beautiful. Trek Samaria Gorge, splash in turquoise waters of Balos Lagoon and bliss out on Elafonissi Beach. While you’re there, be sure to check out these 17 other picturesque Greek Islands. 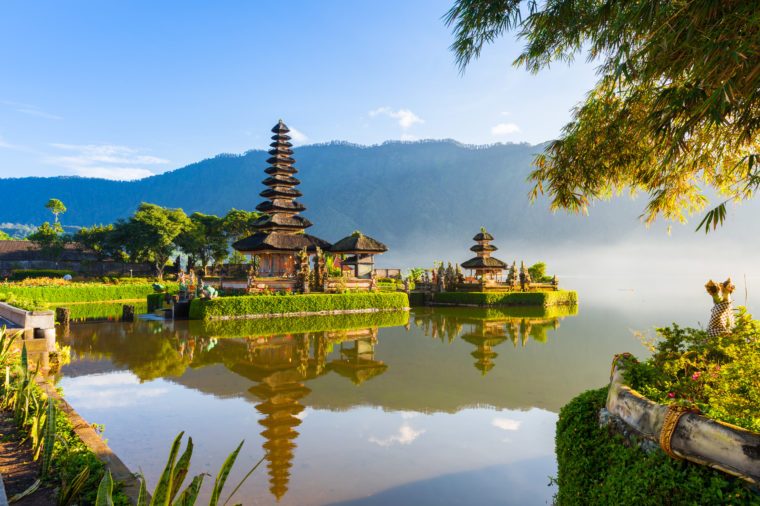 An irresistible mix of stunning scenery, friendly locals, delicious food, vibrant culture, and awe-inspiring attractions, Bali is truly paradise. Despite its popularity, this Indonesian island maintains a sense of soulfulness and authenticity. Terraced rice fields, artisan-led workshops, cute monkeys, and Instagrammable swings await in Ubud. Hop on a motorbike to the cliff-top Uluwatu Temple. Have breakfast with endangered orangutans at Bali Safari and Marine Park. Ride the legendary waves and catch rays in the laid-back surfer village of Canggu. Head to Seminyak for buzzy beach clubs, shopping, and purple-tinged sunsets. Soak away your troubles at the centuries-old Banjar Hot Springs near Singaraja. Already been to Bali? Familiarize yourself with these other popular travel destinations in Indonesia. 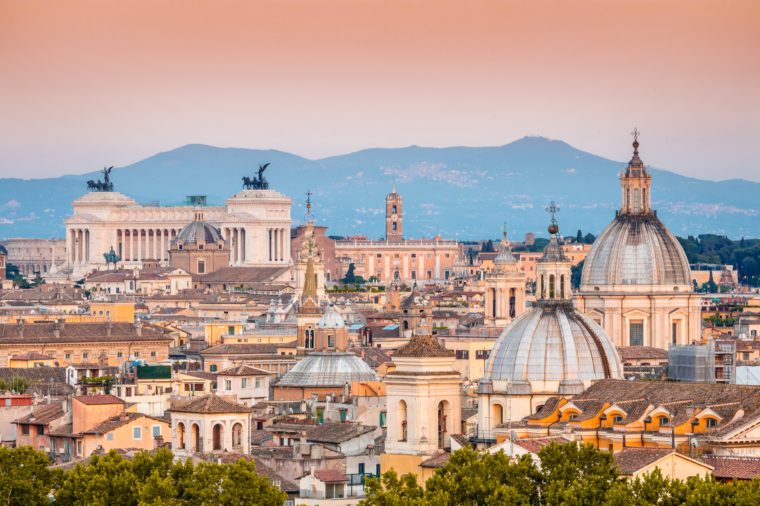 Steeped in history and endlessly enchanting, Rome is home to some of the most recognizable landmarks in the world. The Colosseum, Pantheon, Spanish Steps, Roman Forum, and St. Peter’s Basilica demand veneration. Don’t forget to toss a coin (or two) into the Trevi Fountain for good luck and love. While Rome wasn’t built in a day, you can tick many of the key sights off your list in just a reasonably short amount of time by booking a hop-on hop-off bus tour. A foodie mecca, the Eternal City will tantalize your taste buds with pasta, pizza, and gelato. Its bustling markets sell everything from fresh produce to dried truffles. Prepare for your getaway with a deeper look inside the Vatican. 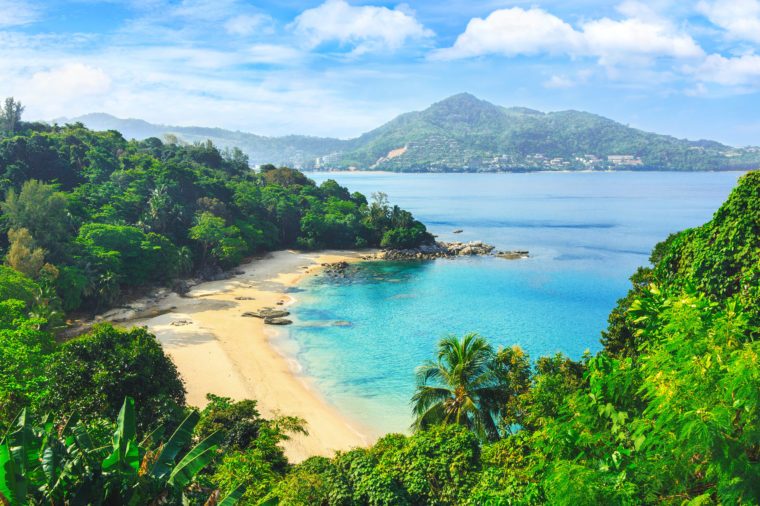 A choose-your-own-adventure type of trip and unabashed holiday hotspot, Phuket gives vacationers the chance to explore Ao Phang Nga National Park, admire the statue of Big Buddha Phuket atop Nakkerd Hill, party in Patong, or sunbathe on white-sand beaches along the island’s west coast. There’s amazing food at any price point. Sample traditional Thai dishes at the Sunday Walking Street Market or savor an unforgettable fine-dining experience. Accommodation options are equally robust. Travelers can live lavishly out at a five-star beachfront resort like Trisara. With three-star hotel rooms starting at just $30, it’s completely feasible to do Phuket on a budget as no doubt about it, Thailand is one of the world’s most affordable travel destinations. 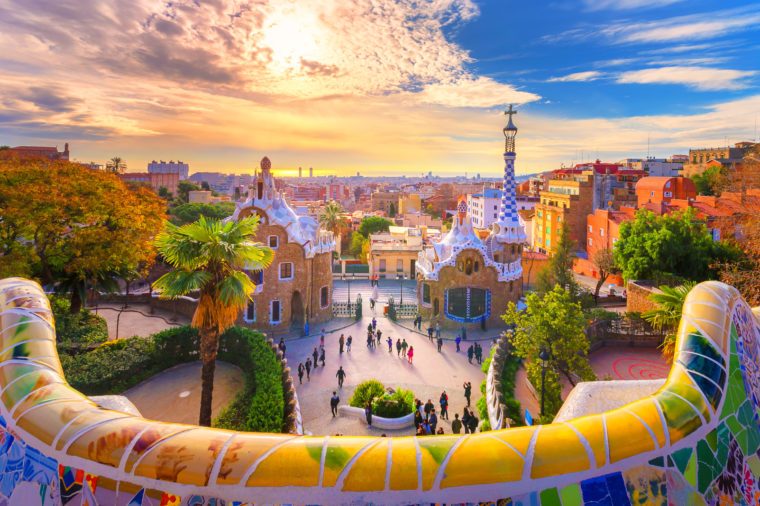 Barcelona is a lively, cosmopolitan metropolis with Antoni Gaudí-designed buildings, tapas bars, sidewalk café, sun-splashed beaches, and stylish hotels. Major attractions like Museu Picasso, Park Güell, and the Basilica de la Sagrada Família—the largest unfinished Roman Catholic church in the world—tend to be crowded. (Pro trip: buying fast-track tickets will save your hours of waiting in line.) However, it’s not as though the whole city is constantly overrun with tourists to a degree that’s unmanageable or interrupts your ability to have an enjoyable trip. Plus, with respect to the pulsating nightclubs and flamenco halls, it’s very much the more the merrier. Don’t miss the 13 travel tips veteran globetrotters wish you knew. 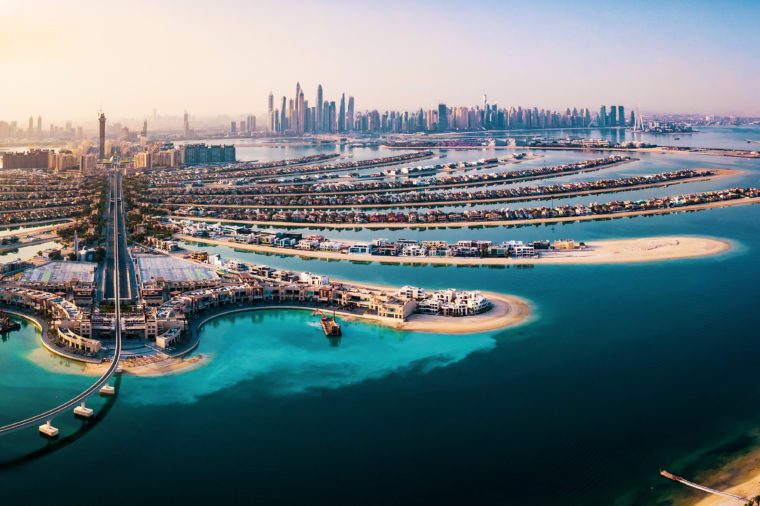 A glitzy, glamourous, extravagantly decadent destination that sprung up out of the arid expanse, Dubai shines in all its insanely over-the-top glory. In the aptly named “City of Gold” bigger is always better. There are towering skyscrapers—including the record-breaking Burj Khalifa which stands at 2,716.5 feet. There are massive malls with international designer stores, award-winning eateries that take up the entire floor of a building, enormous spas, panoramic bars with statement-making crystal chandeliers, giant amusement parks like IMG Worlds of Adventure, the 2,000-seat Dubai Opera, and opulent resorts the size of villages. Our advice? Start saving now because all that glitters doesn’t come cheap. Learn about the 24 other tallest skyscrapers in the world. 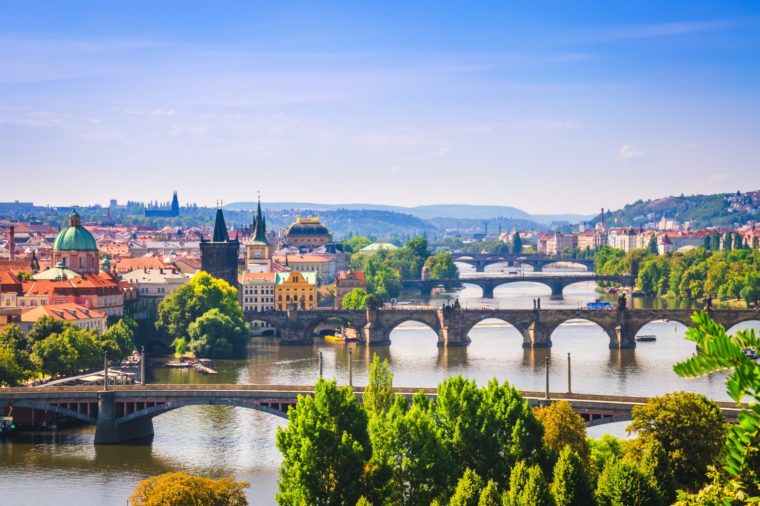 The capital of the Czech Republic charms travelers with its fairytale Prague Castle, baroque buildings, medieval Astronomical Clock, and Gothic churches (hence its nickname, the City of a Hundred Spires). Statues of Catholic saints line the pedestrian-only Charles Bridge, which connects Old Town to Malá Strana while graffiti, song lyrics, inspirational quotes, and symbols of peace cover the Lennon Wall. You can’t beat the sweeping views from Petřín Hill. Need a pick-me-up after sightseeing? Nearby, Strahov Monastery houses a centuries-old brewery and restaurant. Deciding when to jet off? Prague is also one of the best places in Europe to go for spring break—though, it’s undeniably lovely any time of the year. 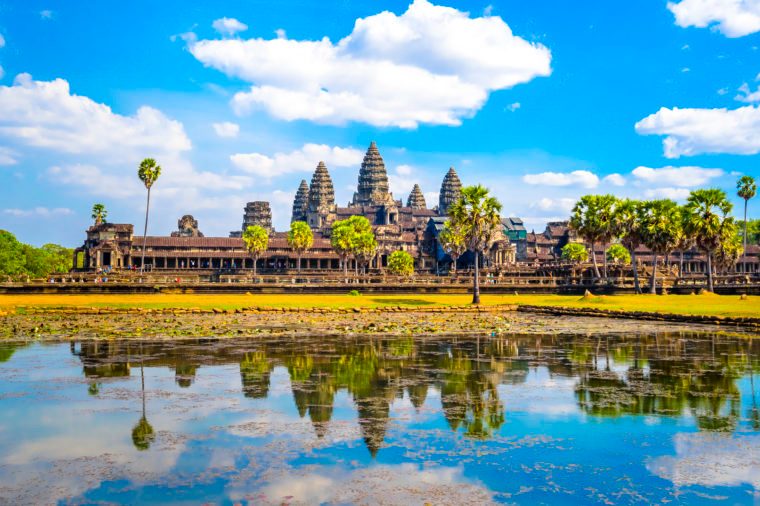 Renowned as the gateway to impressively preserved ruins of Angkor Wat—one of the most awe-inspiring UNESCO World Heritage Sites—Siem Reap is a tourist magnet and wonderfully budget-friendly vacation destination in northwestern Cambodia. The crown jewel of the ancient Khmer Empire remains the main draw, luring more than 2.6 million visitors annually. Ta Prohm and Bayon are also very popular. To escape the crowds, journey to some of the less-frequented temples such as East Mebon, Preah Khan, and Ta Som. For an evening of culturally enriching entertainment, see an Apsara dance performance or book tickets to Phare, The Cambodian Circus. 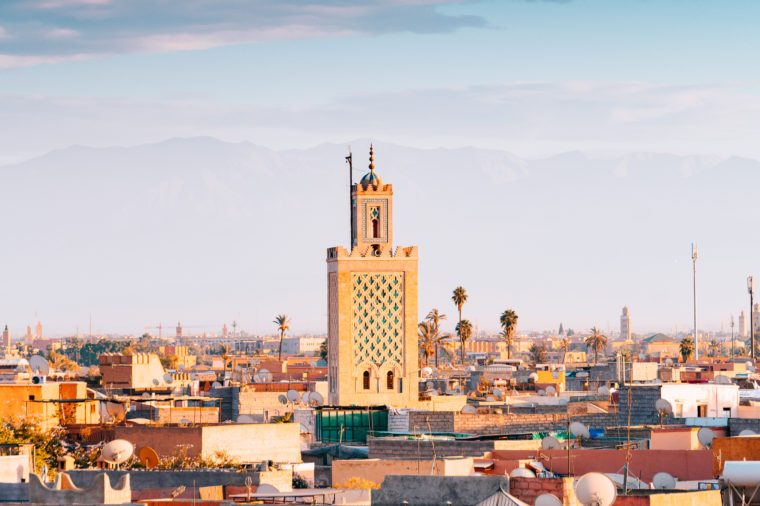 Marrakech entices, dazzles, confuses, and overwhelms. Never shy, though often hiding its most scintillating pleasures (ahem, nightlife) behind closed doors, the “Red City” forges its own path—setting itself apart from the more pious former imperial capitals of Fez and Rabat. The medieval Medina is a labyrinth of souks selling Berber rugs, tagine pots, and jewelry. Snake charmers, dancing monkeys, and fortune-tellers convene in Jemaa el-Fnaa. Seeking serenity amidst the chaos? Stop by Riad Yima for a pot of mint tea or venture to the beloved Jardin Majorelle. FYI many first-timers report Marrakech is difficult to navigate, so we suggest hiring a tour guide to help steer you in the right direction. Peruse these 50 photos of the most beautiful destinations around the world to stoke your wanderlust. 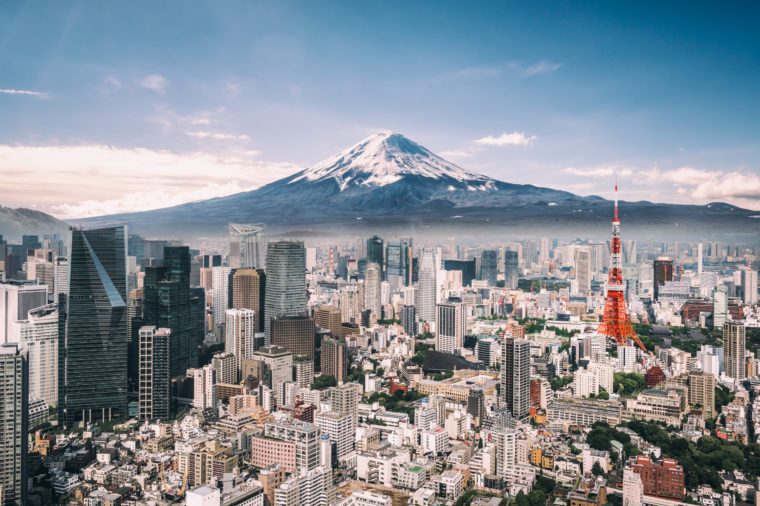 Tokyo marries old and new in a way that will blow your mind: Skyscrapers, arcades, karaoke bars, anime, robot shows, girls dressed in colorful frocks snapping photos in the streets of Harajuku, pint-size drinking dens, ancient temples, and Shinto shrines somehow coexist. We can’t think of a single other place where it’s doable to watch a tuna auction, go to a hedgehog café, relax in an onsen, and eat a bowl of noodles at a Michelin-starred ramen joint all in the same day? For a reprieve from the excitement and stimulation, check into a zen ryokan like the splurge-worthy Hoshinoya Tokyo. On a budget? Find out the most affordable time to visit Tokyo—and other major cities. 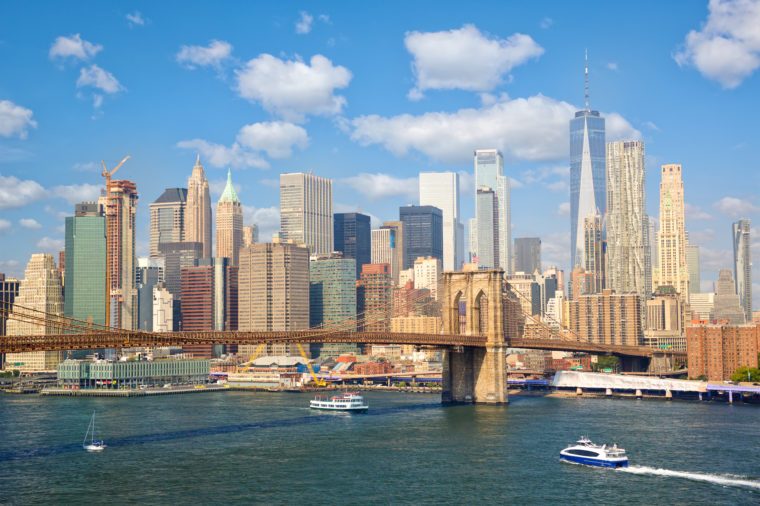 Don’t let its moniker fool you, the Big Apple isn’t the largest city in the United States. Though, with well over 8 million residents spread across five boroughs (Manhattan, the Bronx, Brooklyn, Queens, and Staten Island), it is the most populous. You could make an incredibly compelling argument that NYC has more top-rated and busy tourist attractions than anywhere else. Case in point: the Statue of Liberty, Empire State Building, Central Park, Top of The Rock, Grand Central Station, and the Brooklyn Bridge. Besides sightseeing, the concrete jungle offers first-rate restaurants, arts, entertainment, culture, and shopping. Have your heart set on the road less traveled? Check out these 15 less crowded alternatives to the world’s most popular tourist destinations.

Lindsay Cohn
Lindsay Cohn is an avid traveler who has visited 45 countries across six continents and writes about travel for Reader’s Digest as well as USA Today, Fodor’s, Travel + Leisure, Brides and PureWow. Beyond travel, she covers a variety of lifestyle topics including beauty, wellness and design. Her work has also been published on Well+Good, Elle Decor, Martha Stewart, Domino and Mindbodygreen. Follow her on Instagram @lindsay_cohn