In 2010, a "Presidents Park" museum shut down. The presidential likenesses that comprised it now sit in a field in varying states of disrepair, creating an unsettling, mesmerizing scene in rural Virginia. 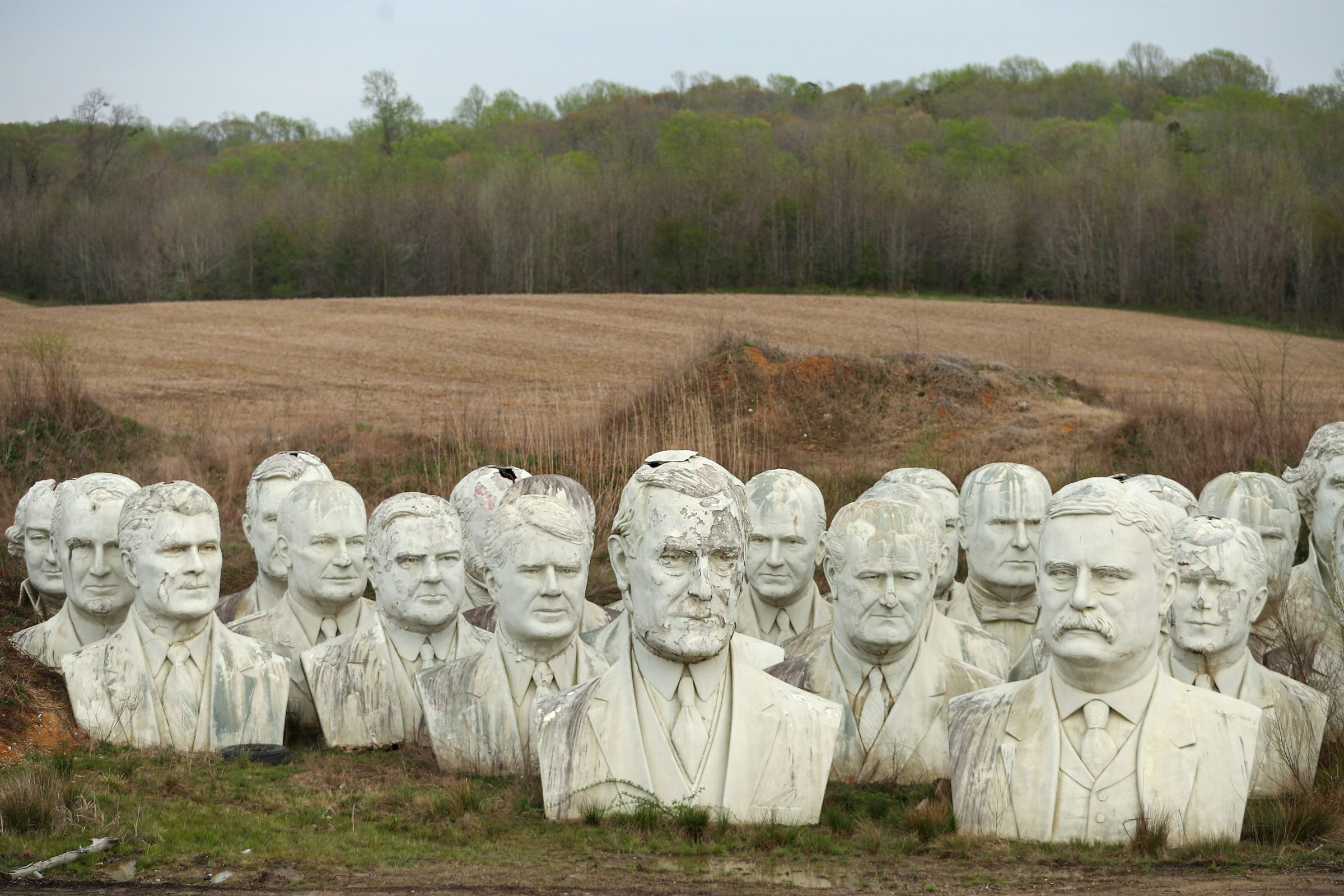 When you think of a presidential statue, you probably think of the enormous, seated Abraham Lincoln at the Lincoln Memorial—or, of course, of Mount Rushmore. In the early 2000s, 43 stone busts of U.S. presidents were created with the intention of creating a monument on par with these. But things didn’t go as planned—and the haunting scene in this picture is the result.

In the late 1990s, Williamsburg landowner Everette “Haley” Newman teamed up with an artist named David Adickes to construct these presidential busts in hopes of creating an East Coast Mount Rushmore. And the plan actually succeeded…to a degree. “Presidents Park,” in Williamsburg, Virginia, opened in 2004 and was operational for six years, but then went bankrupt. But the story of the presidents’ heads was just beginning… Learn about some famous monuments that are hiding little-known secrets—and, more troublingly, the racist history of Mount Rushmore. 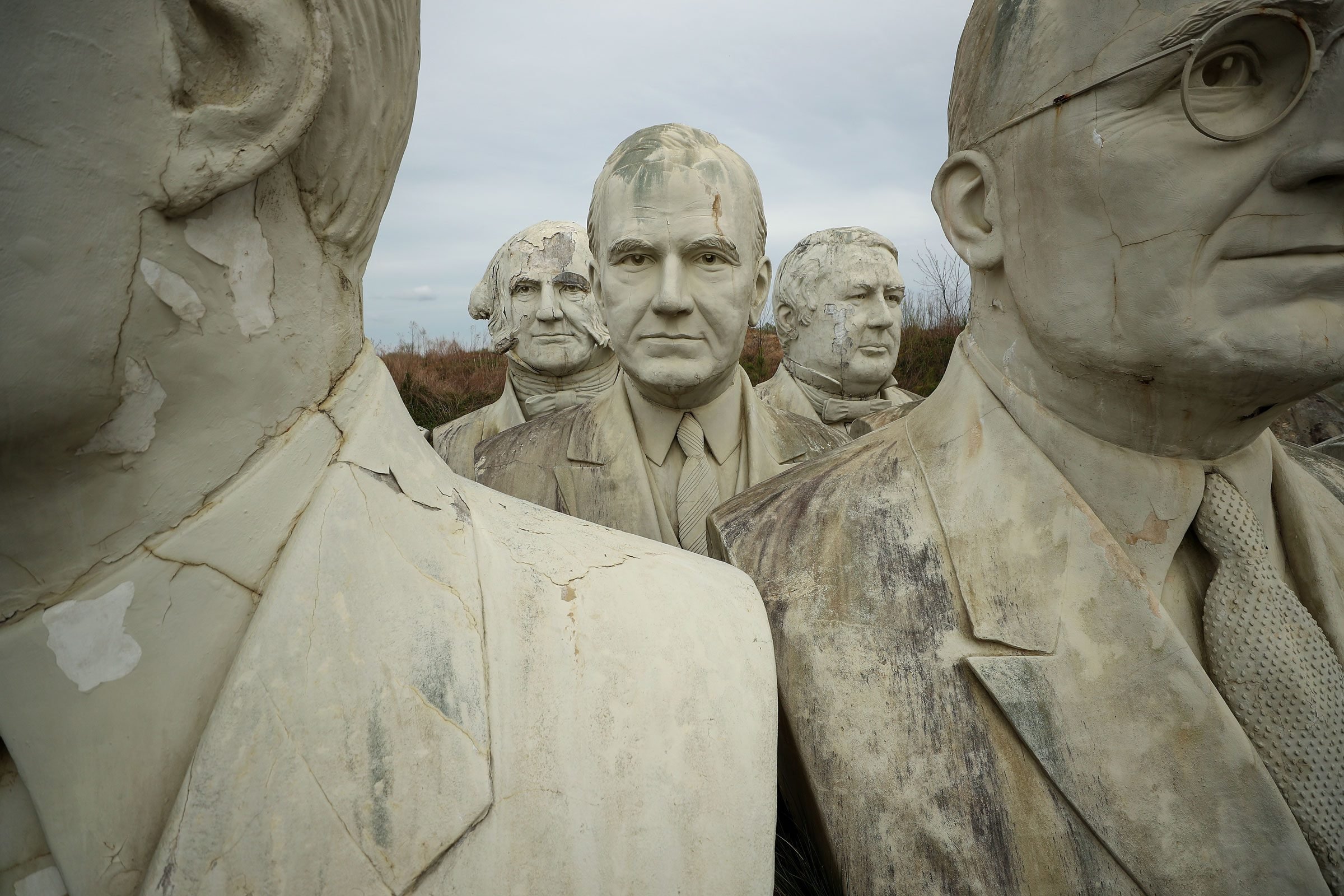 A man named Howard Hankins had helped construct Presidents Park. When it was no longer operational, he was told to destroy the stone heads. Instead, he packed them up and moved them. Since then, they’ve resided on Hankins’ farmland in Croaker, Virginia, falling into various degrees of disrepair—but still standing. Hankins had reportedly planned to create his own attraction with them, or else hoped that an art collector might purchase them. While that never fully happened, per se, they’ve certainly become an attraction. Just not the type that their sculptor (or the presidents!) would have initially hoped. See how it compares with the spookiest tourist attraction in every state. 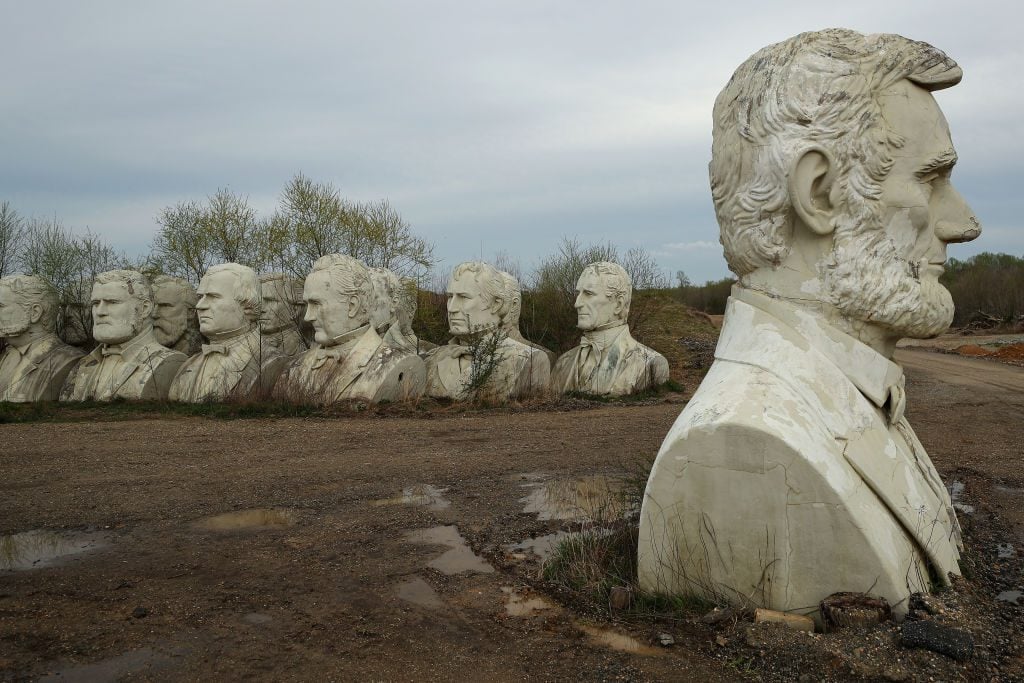 On Hankins’ property, the heads would see success like they’d never seen as part of a more legitimate, buttoned-up attraction. The president heads, as you can see, are now stained and falling apart; some are even missing large chunks. The heads looming out of a deserted field give a borderline horror movie–type feel. A photographer, John Plashal, was taken by their offbeat, eerie majesty, and helped convince Hankins that others would be too. You can’t help but be fascinated by these creepy photos of abandoned amusement parks. 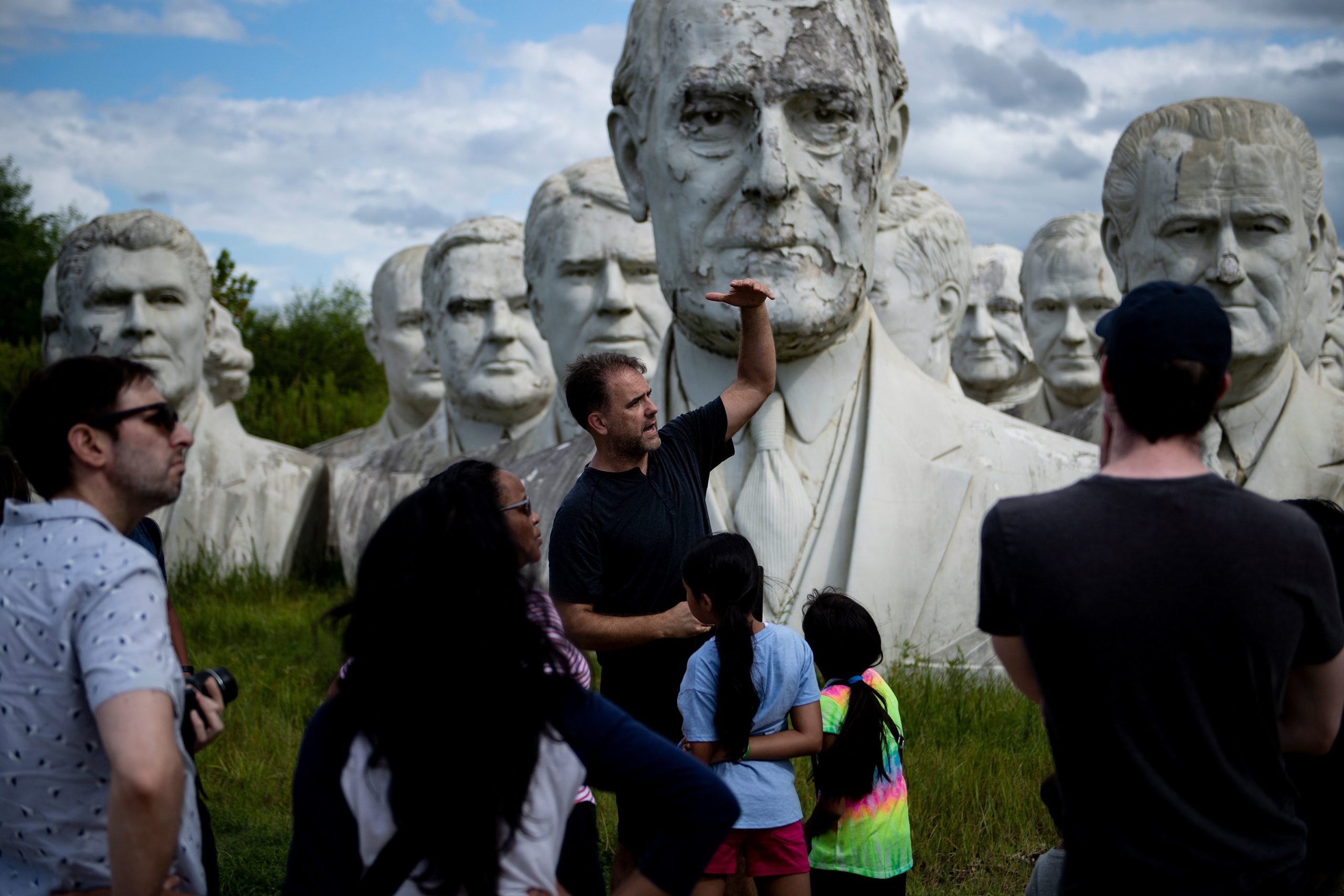 Visitors of all ages

The existence of the haunting busts had begun circulating through social media, and people—technically trespassing—were already sneaking among the giant heads to take pictures. So in 2019, Hankins gave the OK for legitimate tours of the heads to be conducted on the property. Visitors must make a reservation and pay a small fee. Now, the heads are more popular than ever. Plashal even gives some of the tours himself, as you can see here. On the other hand, tourists aren’t even allowed at these 13 creepy abandoned attractions. 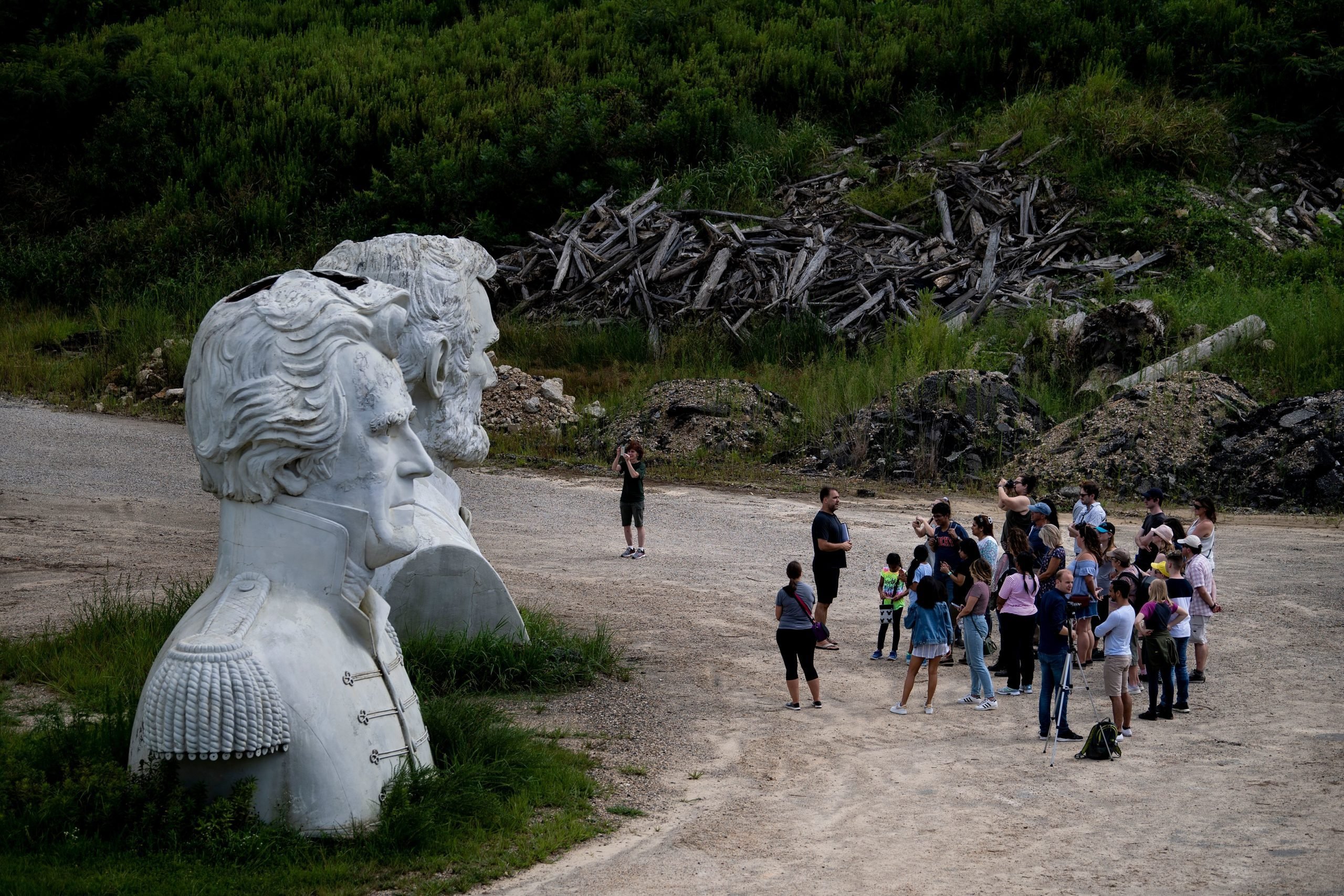 You might not know it looking at pictures of just the heads, but when people are in the photos, you can see how truly massive they are! Their heights range from 18 to 20 feet, and they tower over the tourists. Not to mention, they’re heavy. According to Smithsonian, they weigh anywhere from 11,000 to 20,000 pounds! That’s all the more reason Hankins didn’t want to destroy them—transporting all of these gigantic works of art was no easy task, and cost him thousands of dollars, too. Take in some more pictures of abandoned places that no longer exist. 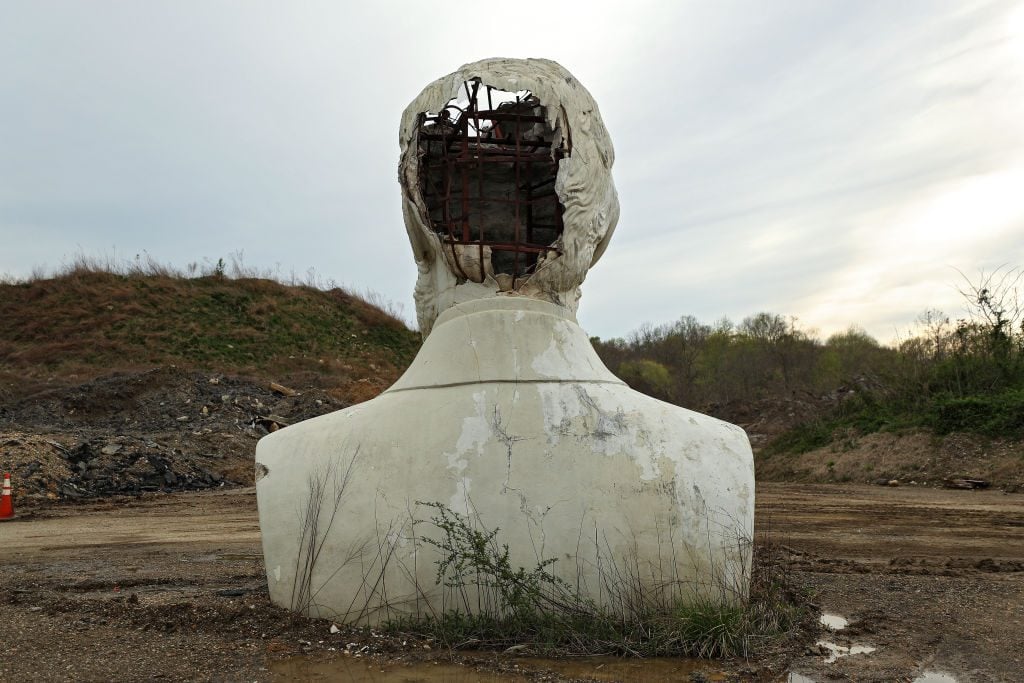 Rough around the edges

Some of these former Commanders-in-Chief are literally falling apart, as you can see from this likeness here. Take a look at some forbidden places no one will be allowed to visit. 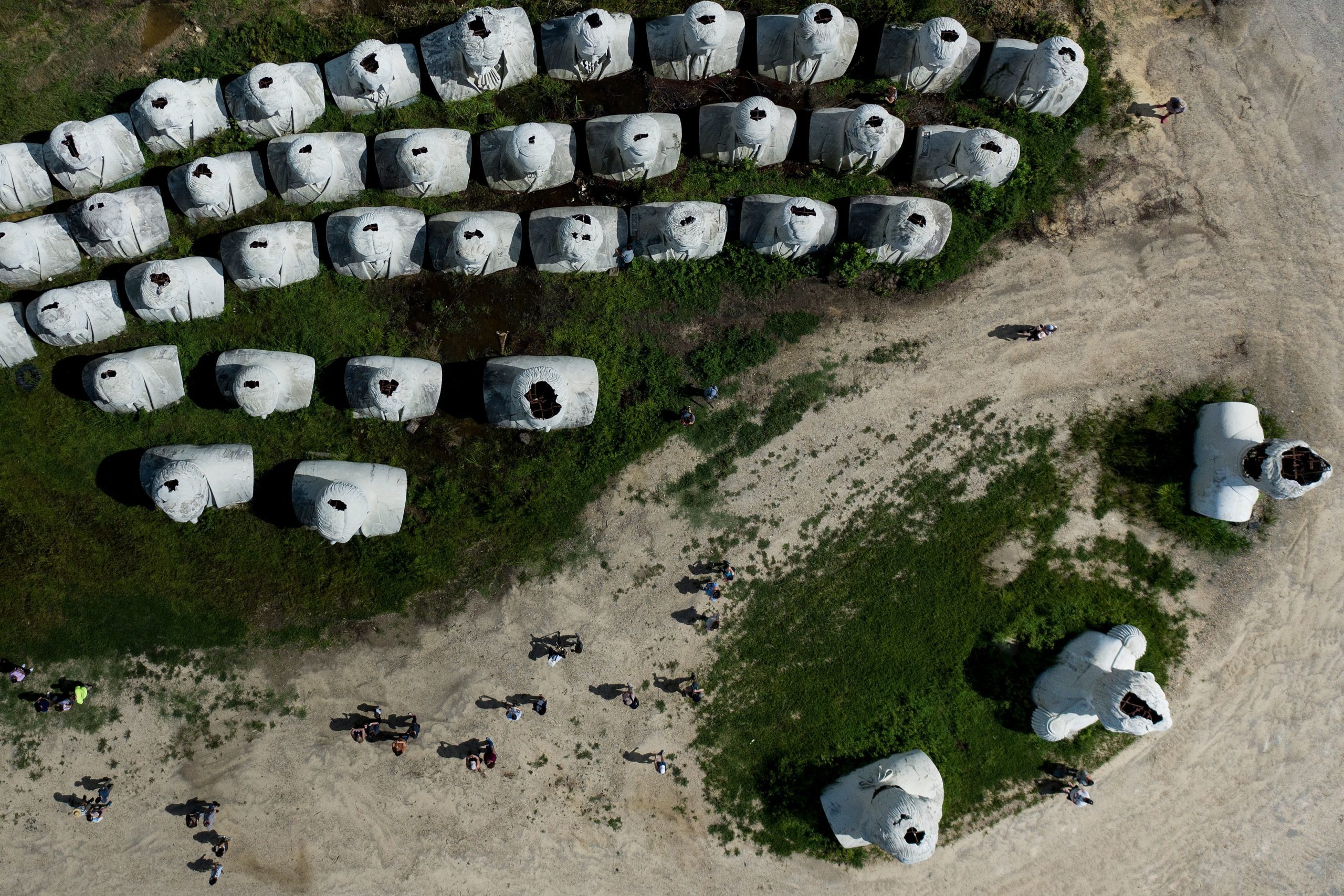 This aerial view looks downright otherworldly. Luckily, this is not one of the famous places that forbid you from taking pictures. 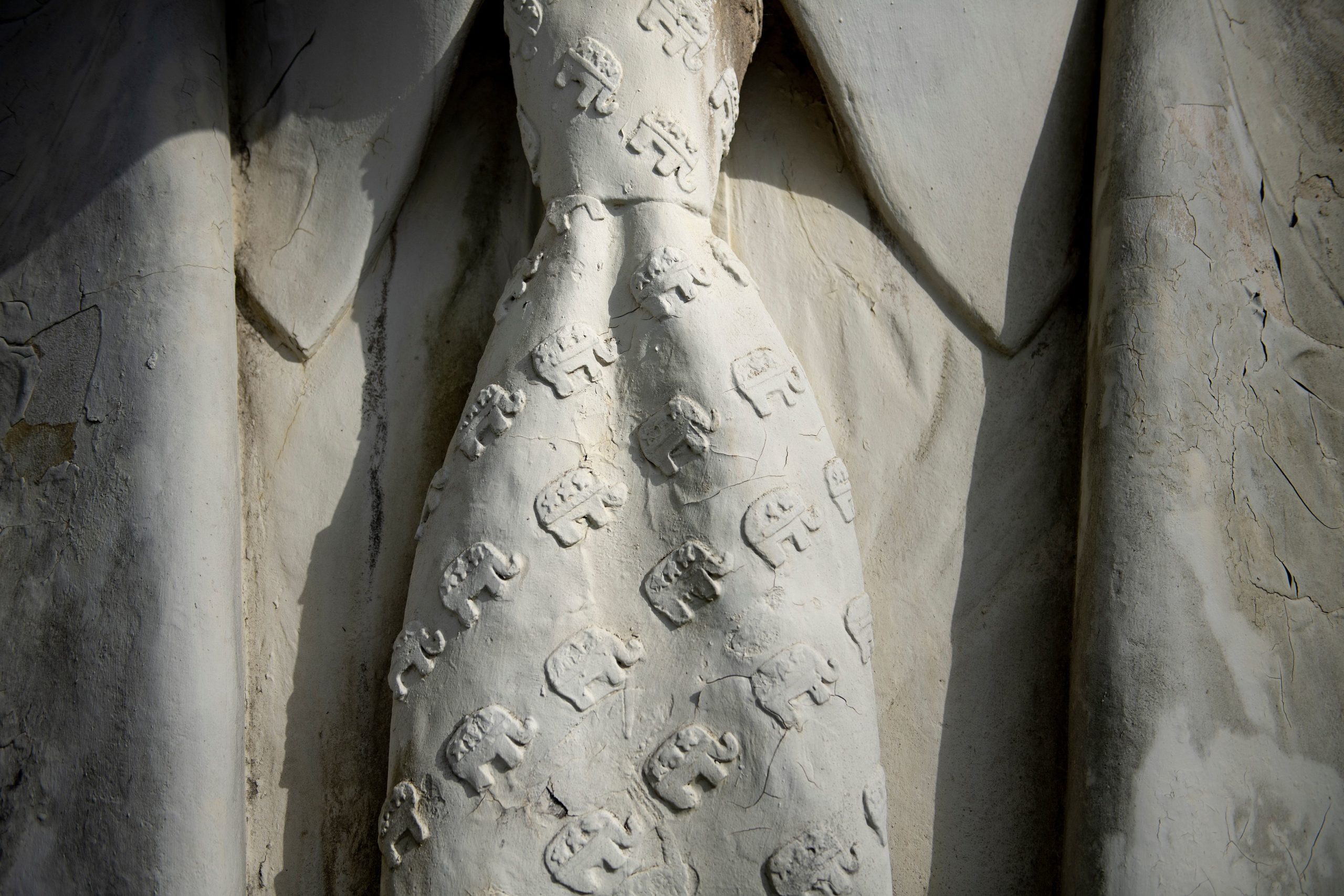 With a close-up view of these president busts, you can see the immense amount of detail that Adickes put into creating them. Just look at George W. Bush’s tie here, carved down to its pattern of Republican elephants! We can certainly understand why Hankins was unwilling to destroy these. These 14 historic places are now abandoned. 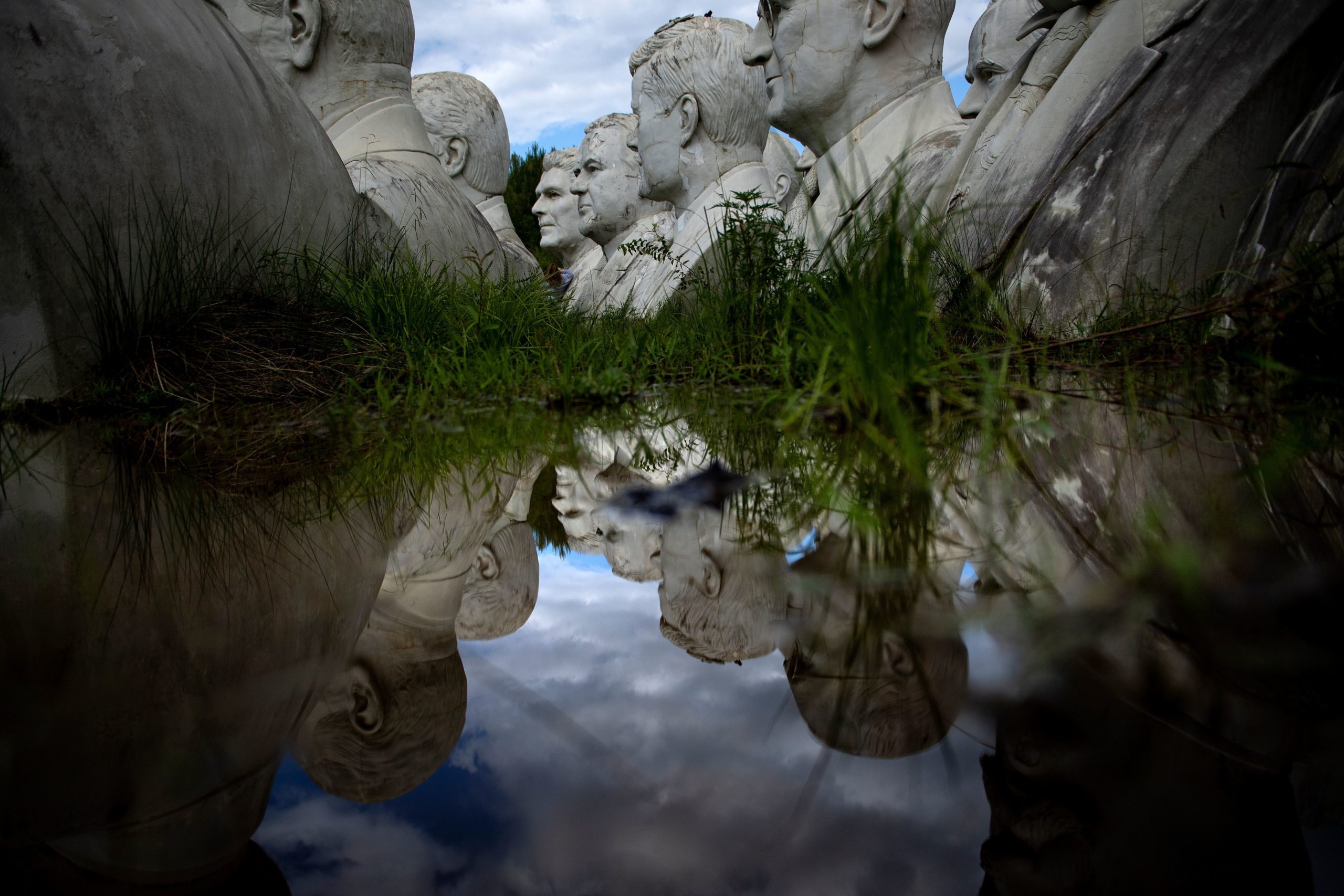 The president statues continue to be at the mercy of the elements—just look at this expanse of water right at the base of the stone presidents. But we admit that the pictures this phenomenon yields can be hauntingly beautiful. 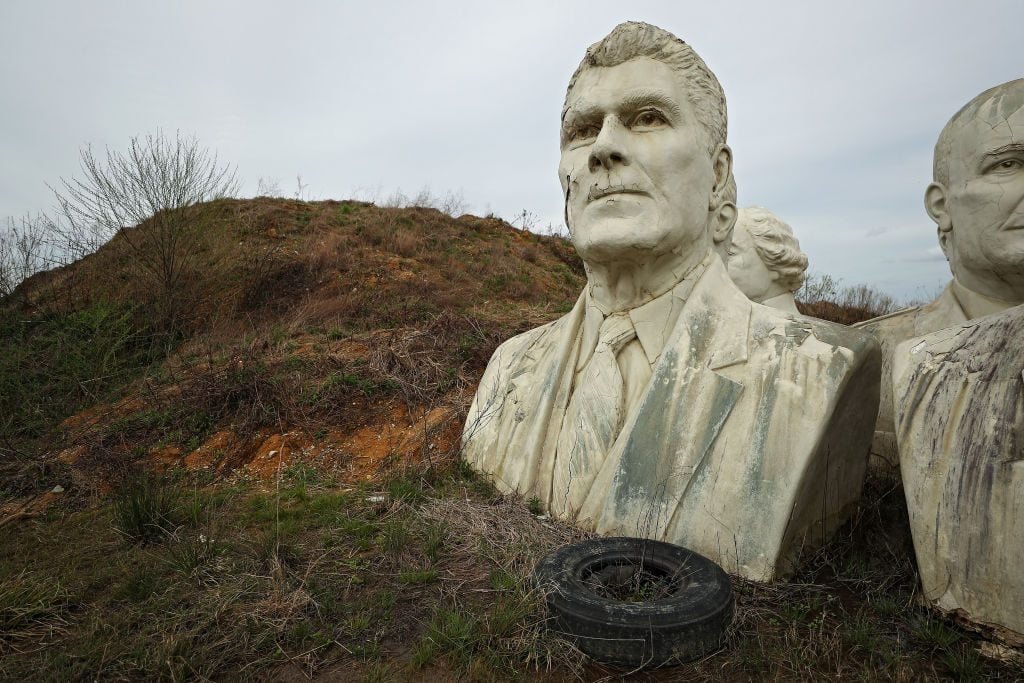 The discarded tire here gives the appearance that the president heads are sitting in a junkyard. (The land is actually used as an industrial recycling site.) Here’s where to find the spookiest abandoned place in every state. 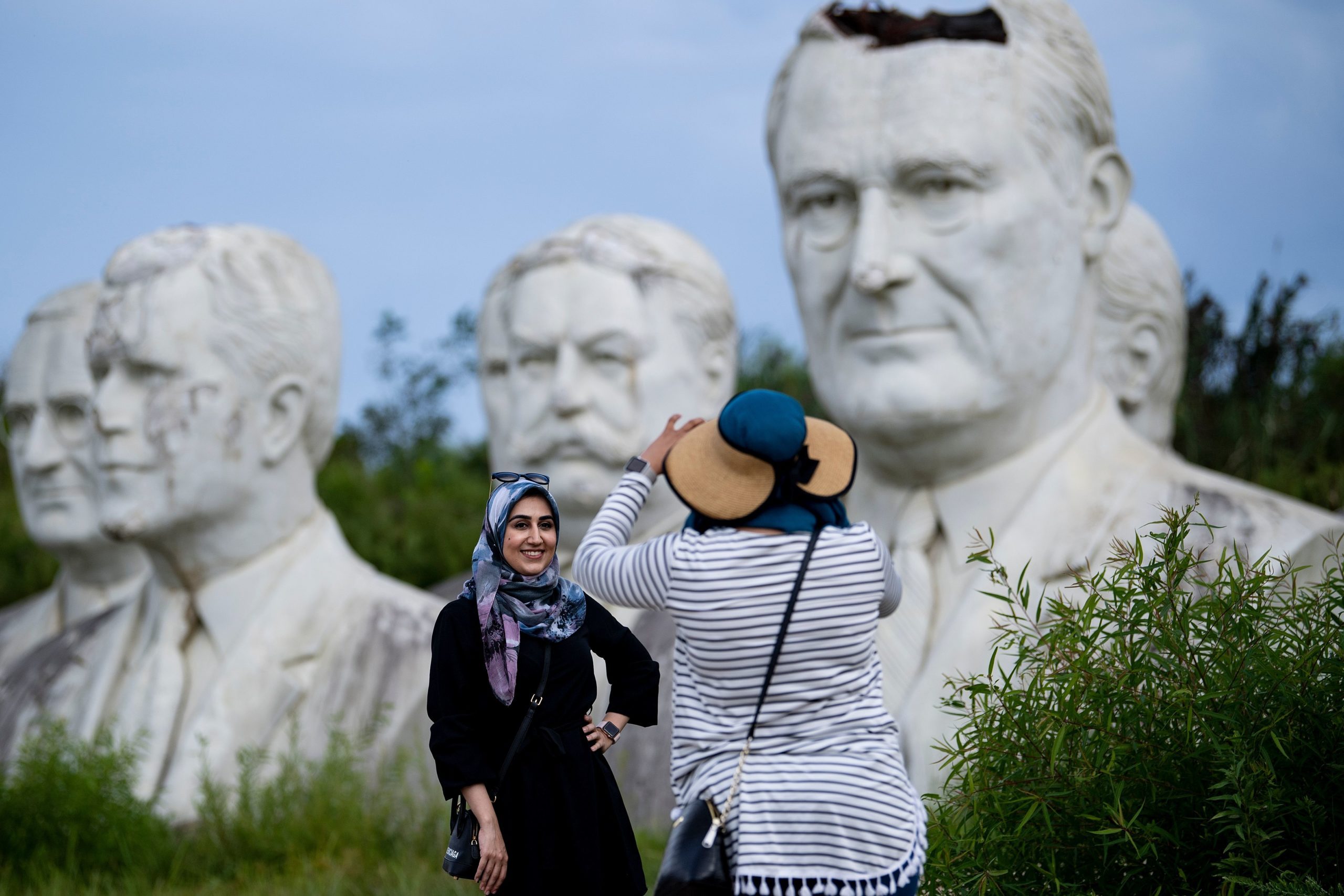 The exhibit features busts of 43 former Commanders-in-Chief, from George Washington to George W. Bush. The attraction provides a great spot to take a picture with your favorite (or least favorite!). We bet you never knew these astonishing facts about U.S. presidents. 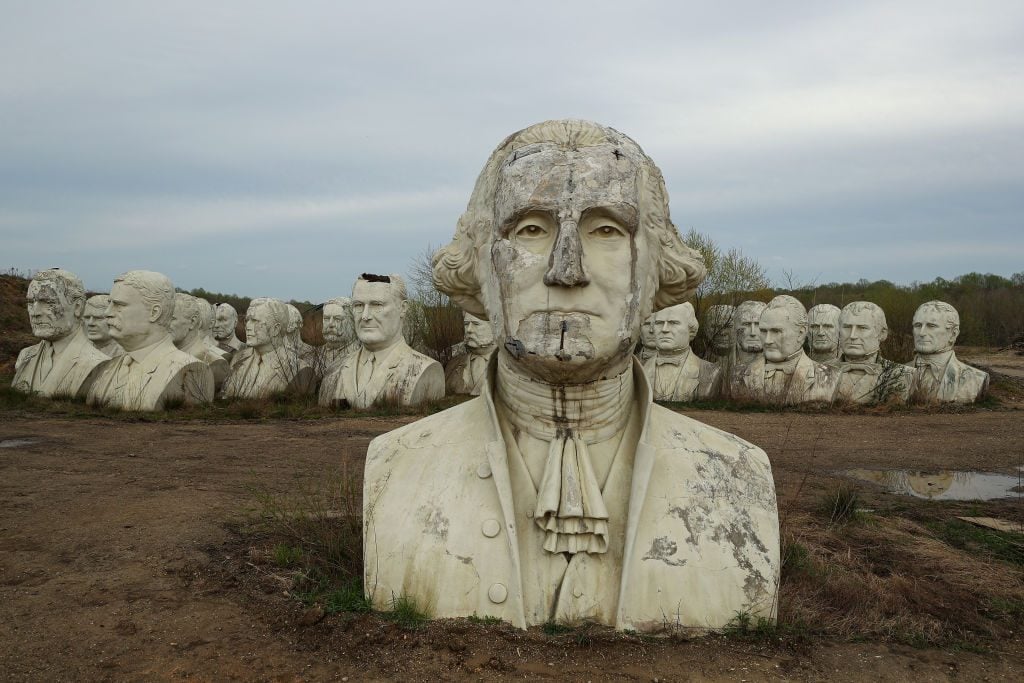 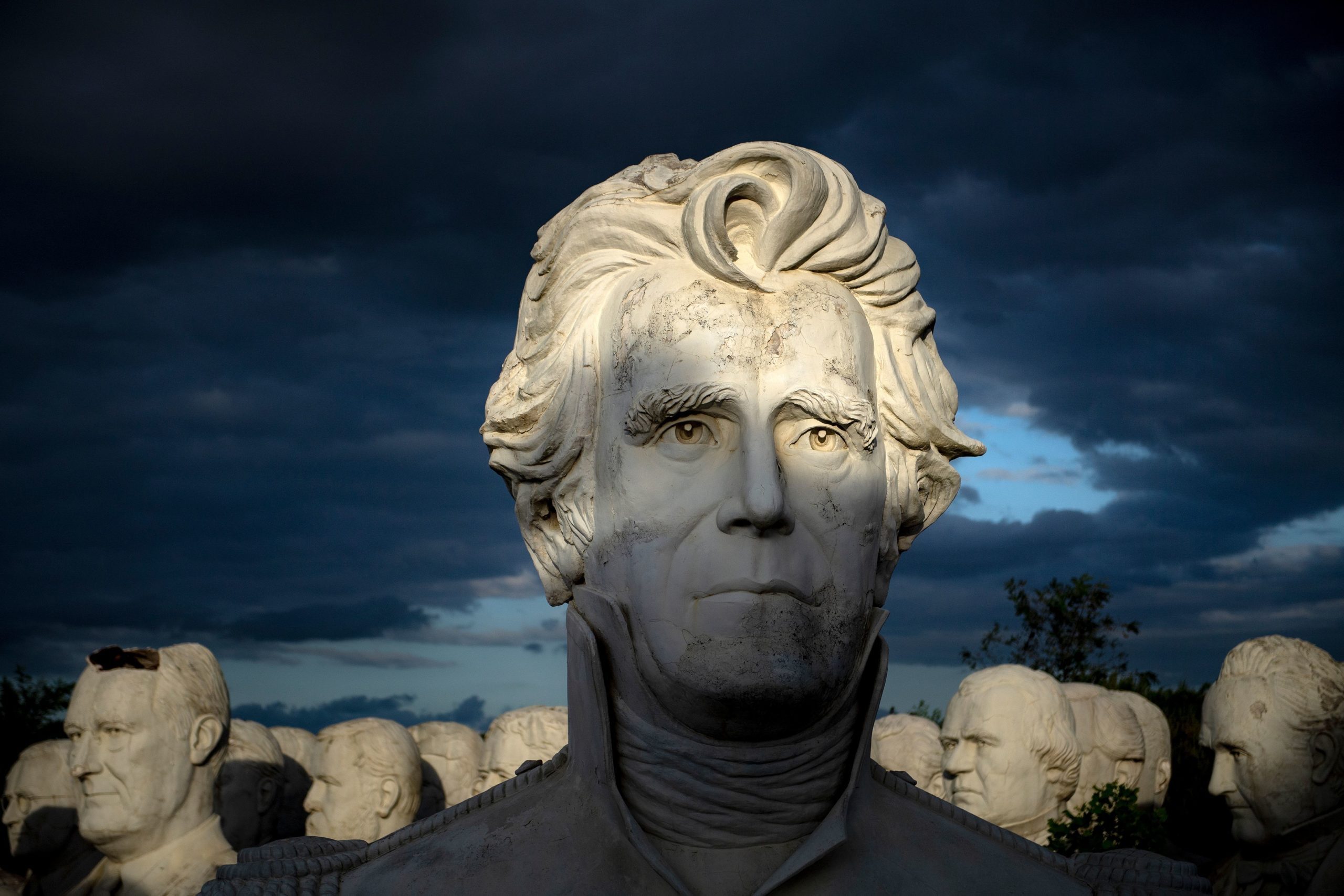 Crumbling presidential statues: Ahead of their time?

We’re now in a time when people are contesting and even tearing down statues of American “heroes”—including presidents like Andrew Jackson, who orchestrated the Trail of Tears and brought about the deaths of thousands of Native Americans. So crumbling, decrepit presidential statues have more symbolic significance than ever. Read about 10 of the most controversial statues and monuments in America and around the world.