13 Places in America That Are Said to Be Cursed

Whether you're fascinated by the supernatural or fear the unknown, these are the places you need to know about. 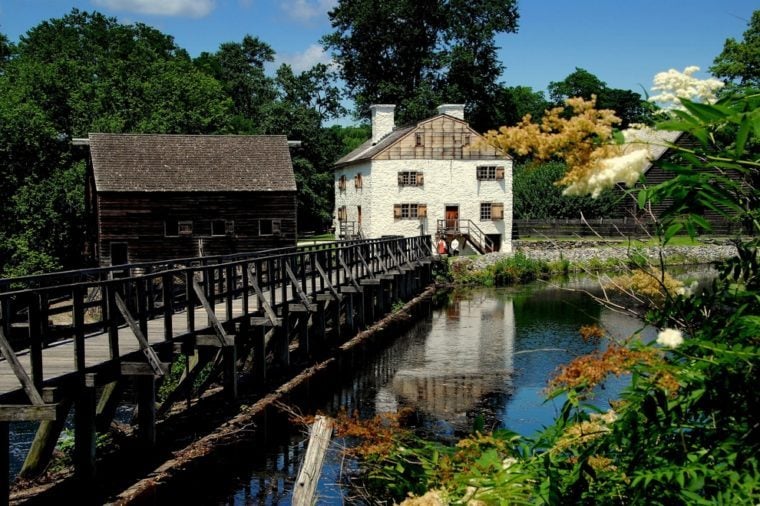 The tale of the Headless Horseman has been an integral part of the American narrative since Washington Irving penned “The Legend of Sleepy Hollow” in 1820. The quiet New York town is in some ways built upon this gothic story, and the contents of the legend live have intermeshed with the town’s actual history. Though it was originally written as fiction, people still try to find a glimpse of the apparition said to plague the town. Visit the 15 spookiest travel destinations around the world. 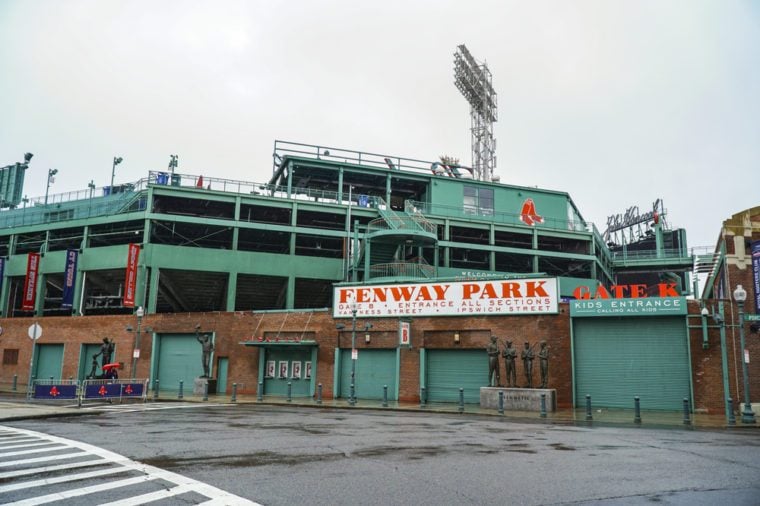 Babe Ruth made his name playing for the Yankees, but he was a Red Sox player first. When the Sox sent him off to play for the Yankees, the boys in the pinstripes went on to win numerous world titles while Boston went on an 86-year championship drought. “They went from the most successful team in baseball to the least,” says American history teacher and folklore author Zachary Lamothe. “A series of ill-timed misfortunes that seemed more than just bad luck plagued the team for 86 years, finally ending in 2004.” The so-called “Curse of the Bambino” is one of the most well-known curses in history. 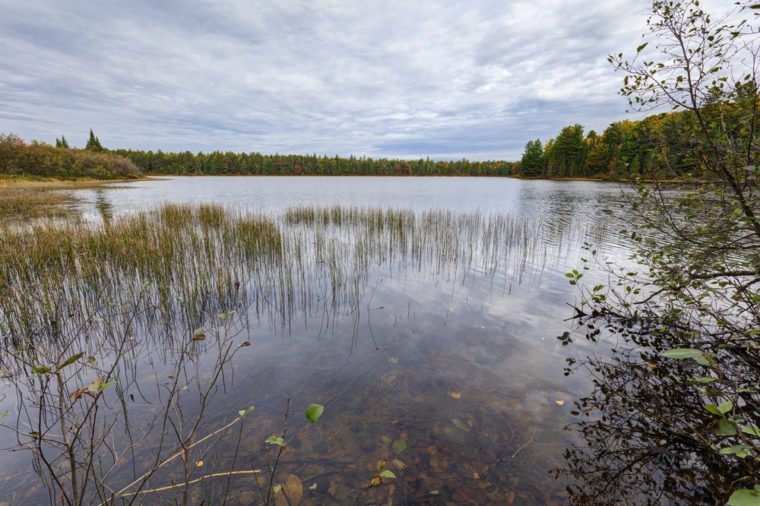 Much of American folklore stems from colonial settlers’ tense relationships with Native Americans. Which helps explain why the colonists came to fear places sacred to the Native Americans. Brunswick Springs in Vermont is one. The tale goes that the Abenaki tribe took an injured soldier to the springs, and the water healed his wounds, reports the New England Historical Society. Later, the soldier returned to bottle the water to sell; when the natives tried to stop him, the soldier ended up killing an Abenaki man and his child. The tribe placed a curse on the waters, and since then businessmen have tried—and failed—to use the springs for profit. Their buildings succumbed to strange forces of nature, such as fires and land collapses. 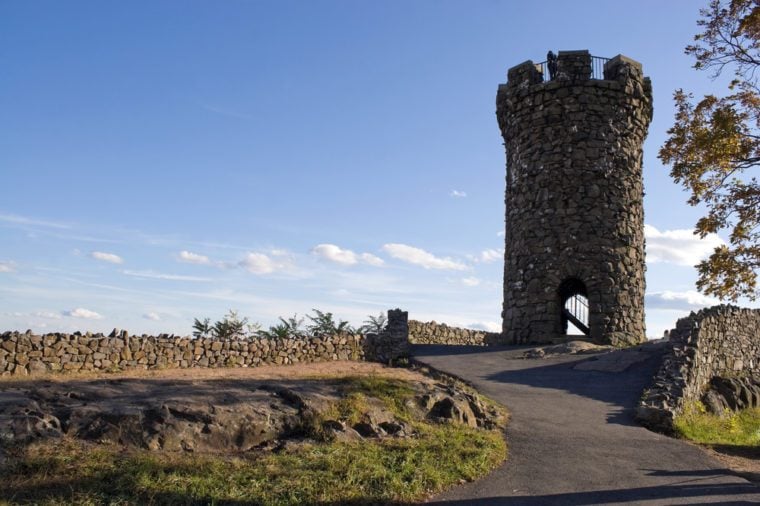 “High atop West Peak in the Hanging Hills of central Connecticut,” Lamothe recounts, “a small, cute black dog greets visitors with a wagging tail and a soundless bark. The first encounter brings good luck, the second tragedy, and the third, death.” This legend belonging to the town of Meriden is thought to still steal the lives of hikers and adventurers today. 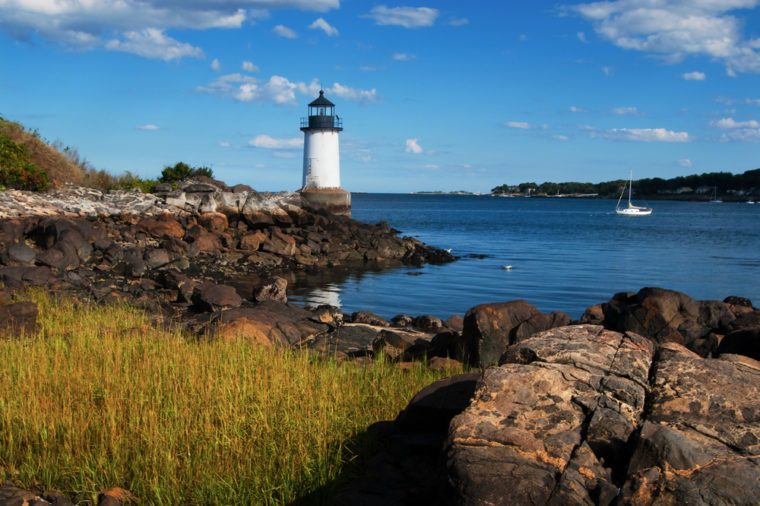 When it comes to Salem and curses, just take your pick. The infamous Salem Witch Trials of the late 17th century left so much devastation in its wake that the land feels haunted to this day. One notable curse concerns a man named Giles Corey. “Upon his being pressed to death,” Lamothe says, “Corey uttered a curse onto the town of Salem and on the town’s sheriff. Since then, Salem’s sheriffs have been stricken with early deaths and disease, culminating in 1991 when the county jail was moved out of Salem.” Check out these 10 things you should stop believing about the Salem Witch Trials. 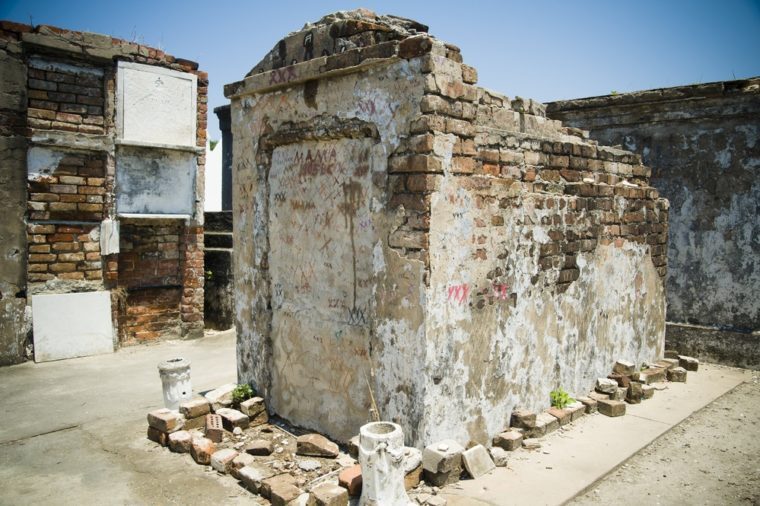 Voodoo queen Marie Laveau is perhaps New Orleans’ most infamous resident, past or present. She was a powerful figure, in both reality and legend. Locals believed Laveau could make a person’s wishes come true or bring ill fortune if she thought someone deserved it. She and her black snake, Zombi, are said to appear in the graveyard from time to time. Some even believe that she can still use her powers to this day for good and evil. 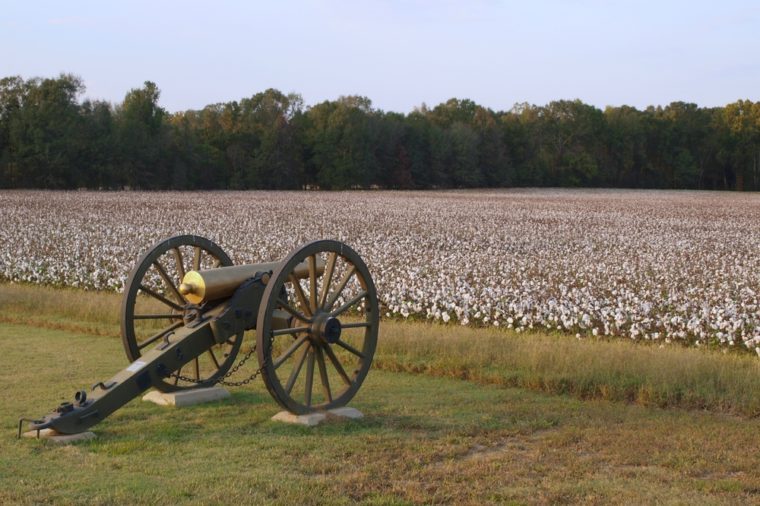 Aside from Salem, the historical town of Gettysburg in Pennsylvania may be the most cursed place in America. The battle that took place there during the Civil War is singled out by History.com as the most important battle of the entire war. There are countless accounts of ghost sightings there, as well as a curse upon those who dare disturb the site. Lamothe says, “Visitors who have taken a rock from the battlefield as a souvenir have brought bad luck into their homes and to their families.” Many have even made trips to return the stones. 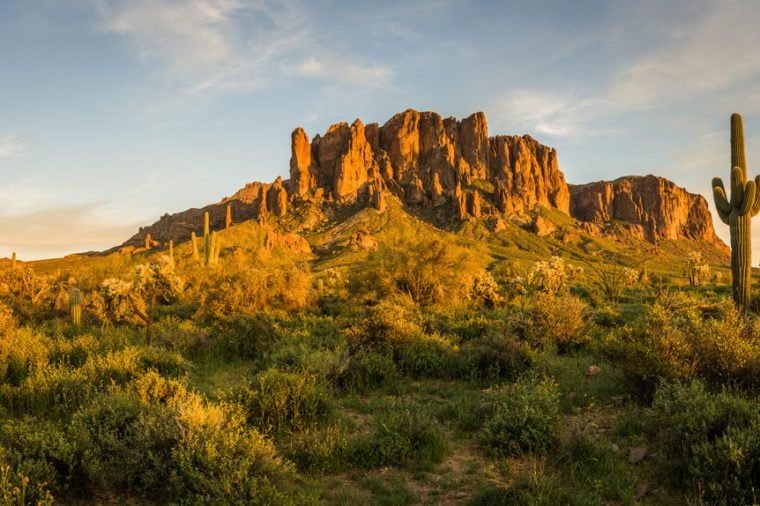 “Buried somewhere deep in this range of craggy peaks is the Treasure of the Lost Dutchman,” says Lamothe. He says that those hunting for the treasure have turned up “mad or dead.” The story goes that a German immigrant by the name of Jacob “The Dutchman” Waltz found a rich gold reserve in a mine somewhere in the Superstition Mountains surrounding Phoenix, Arizona. No one has yet found it, but at least one body of a person who was searching for it has been discovered. 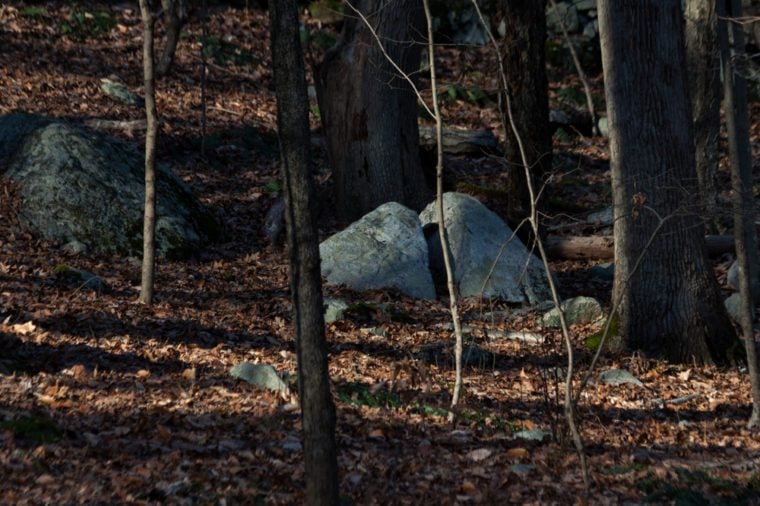 This spot in Connecticut has been nicknamed the “Village of the Damned” because the family for whom the town is named all met strange and untimely deaths. People who moved there had a high likelihood of succumbing to illnesses, committing suicide, or being plagued by evil spirits. Eventually, the area was mostly abandoned. It ranks as one of the 50 spookiest urban legends in the United States. 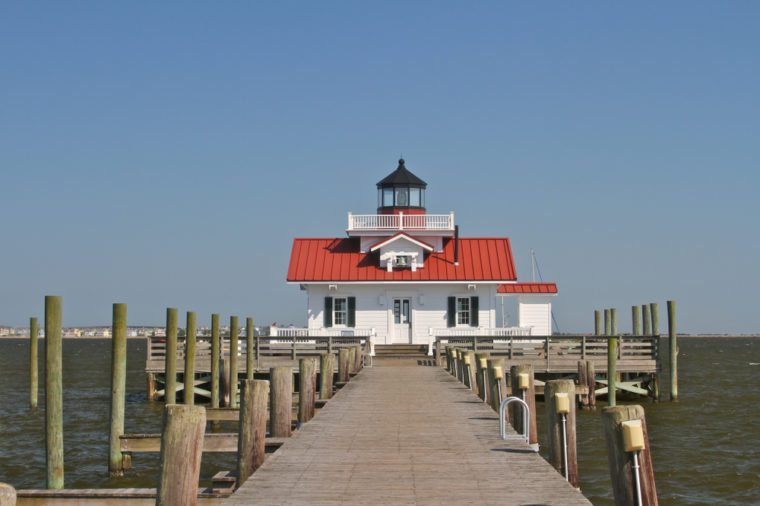 Like Dudleytown, Roanoke is another one of those American towns with an eerie and inexplicable history. History.com reports that the entire population of this settlement off the North Carolina coast simply disappeared in the late 1500s—and no one knows why. To this day, what happened remains a complete mystery. Get even more spooked with these 10 true ghost stories from the most haunted places in the world. 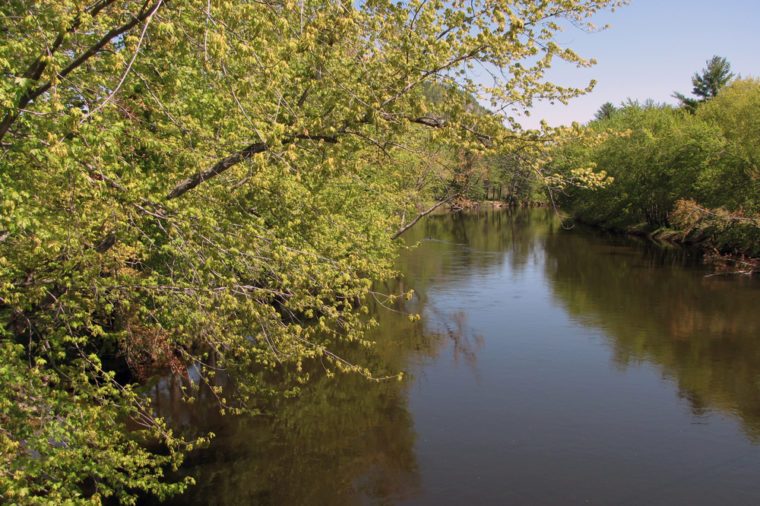 The Saco River in Maine is known in American lore as a place of death. Squando, a great figure of the Sokokis tribe in the late 1600s, is believed to have lost his wife and child in the river at the hands of colonial settlers. As revenge, Squando placed a curse upon the river, foretelling that it would claim three lives every year that followed. According to the New England Historical Society, the curse was reportedly broken in 1947. 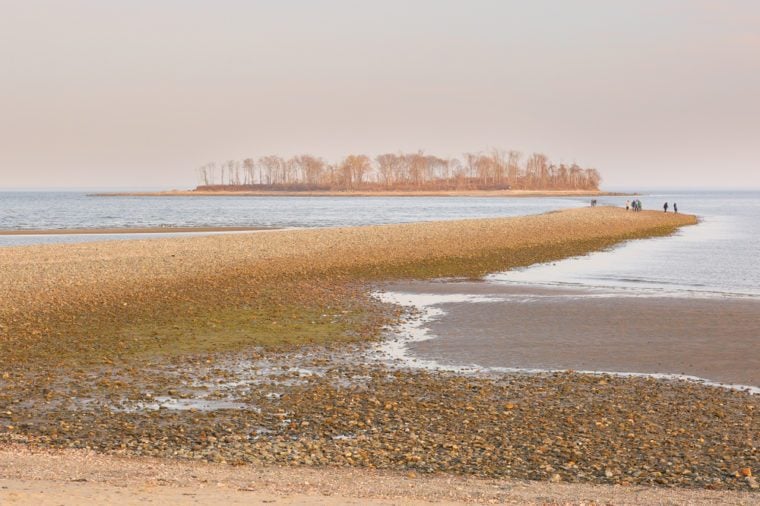 Connecticut’s Charles Island is cursed for much the same reason as Vermont’s Brunswick Springs: The Native Americans saw the land as spiritually sacred and cursed anyone who tried to build on it. However, Charles Island has at least two more curses to its name. Famed pirate William Kidd buried treasure there under a curse, as did five sailors who had stoled cursed gold from a Mexican emperor. Take a look at the other most haunted bodies of water in the world. 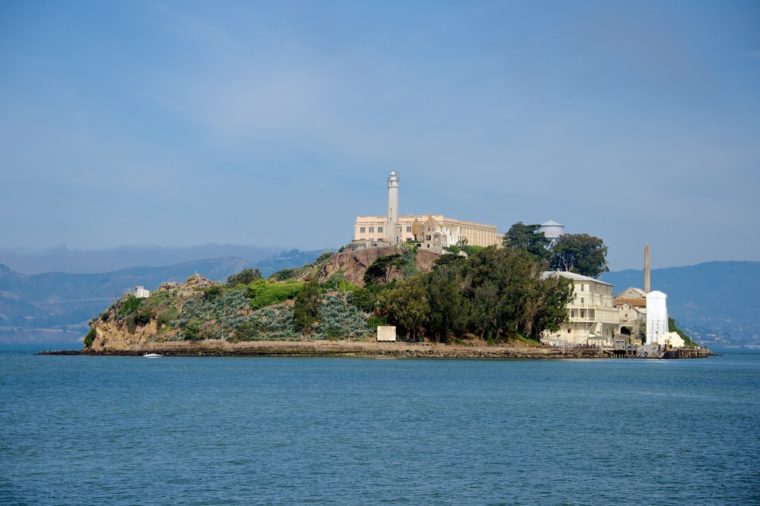 “Long before its use as a maximum security prison,” Lamothe says, “Alcatraz Island was known to local Native Americans as cursed.” The Ohlone tribe saw the island as a place where only evil spirits roamed. They used it as a place to excommunicate tribal members who violated laws. The negative energy surrounding the San Francisco Bay island continued as it became a prisoner of war camp during the Civil War, a quarantine stop for soldiers returning from foreign wars, and finally, a prison that housed the worst criminal in the United States. Read about strange urban legends that turned out to be true.