These baby sloths raise cute to a whole new level. 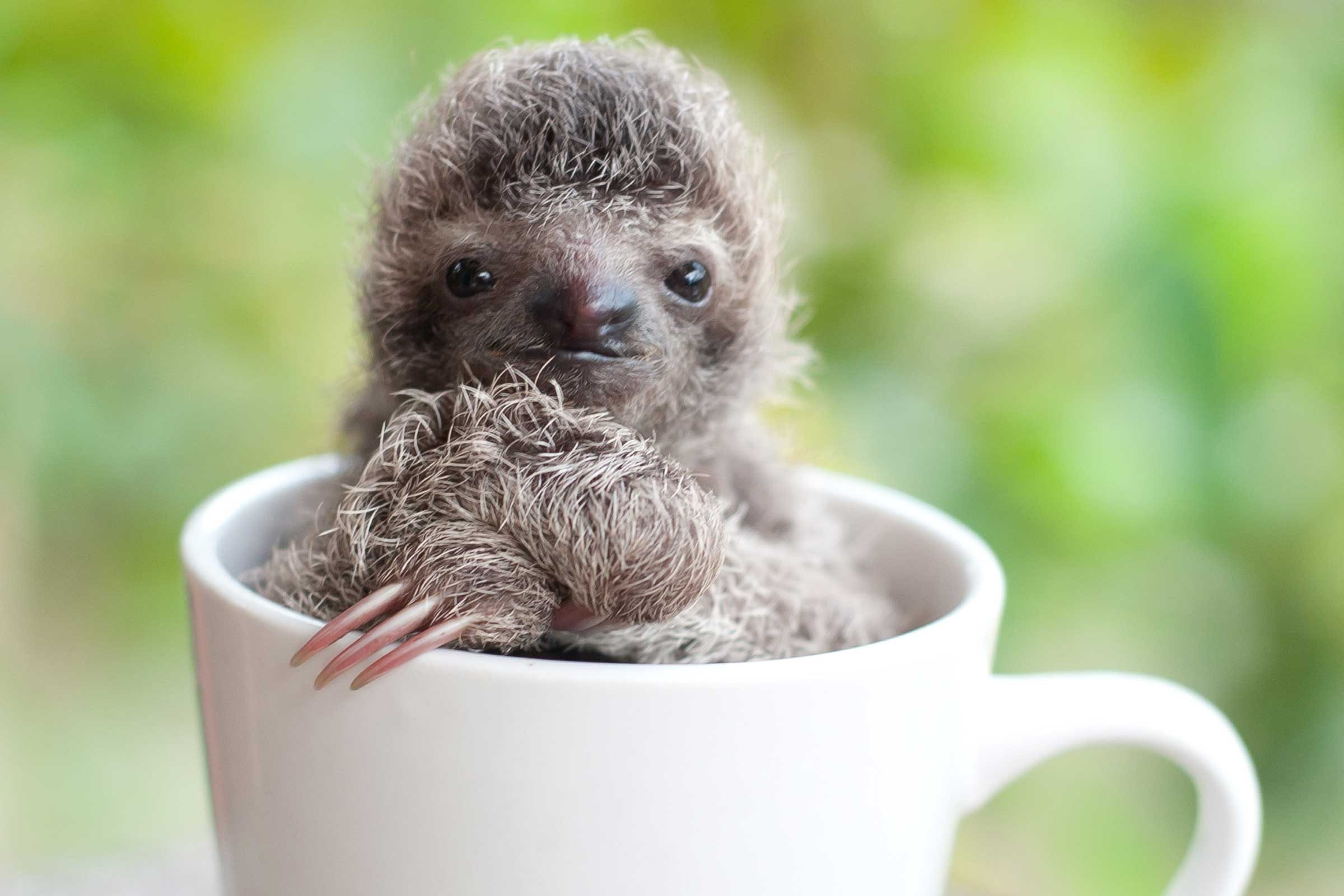 The healing power of sloths

“Loving sloths saved my life,” says writer/photographer Sam Trull in her book Slothlove. In an effort to move on with her life after painful personal losses, she went to Costa Rica three years ago to volunteer at a wildlife rehabilitation clinic run by the nonprofit Kids Saving The Rainforest (KSTR). Trull, a primatologist, was drawn to Costa Rica to work with the country’s monkey species, but at KSTR, she ended up falling hard for sloths. Can you blame her? Here, a sloth called Keychain peeks out of a cup. If you think these sloth pictures are adorable, you’ll also want to check out these animal friendships that will melt your heart. 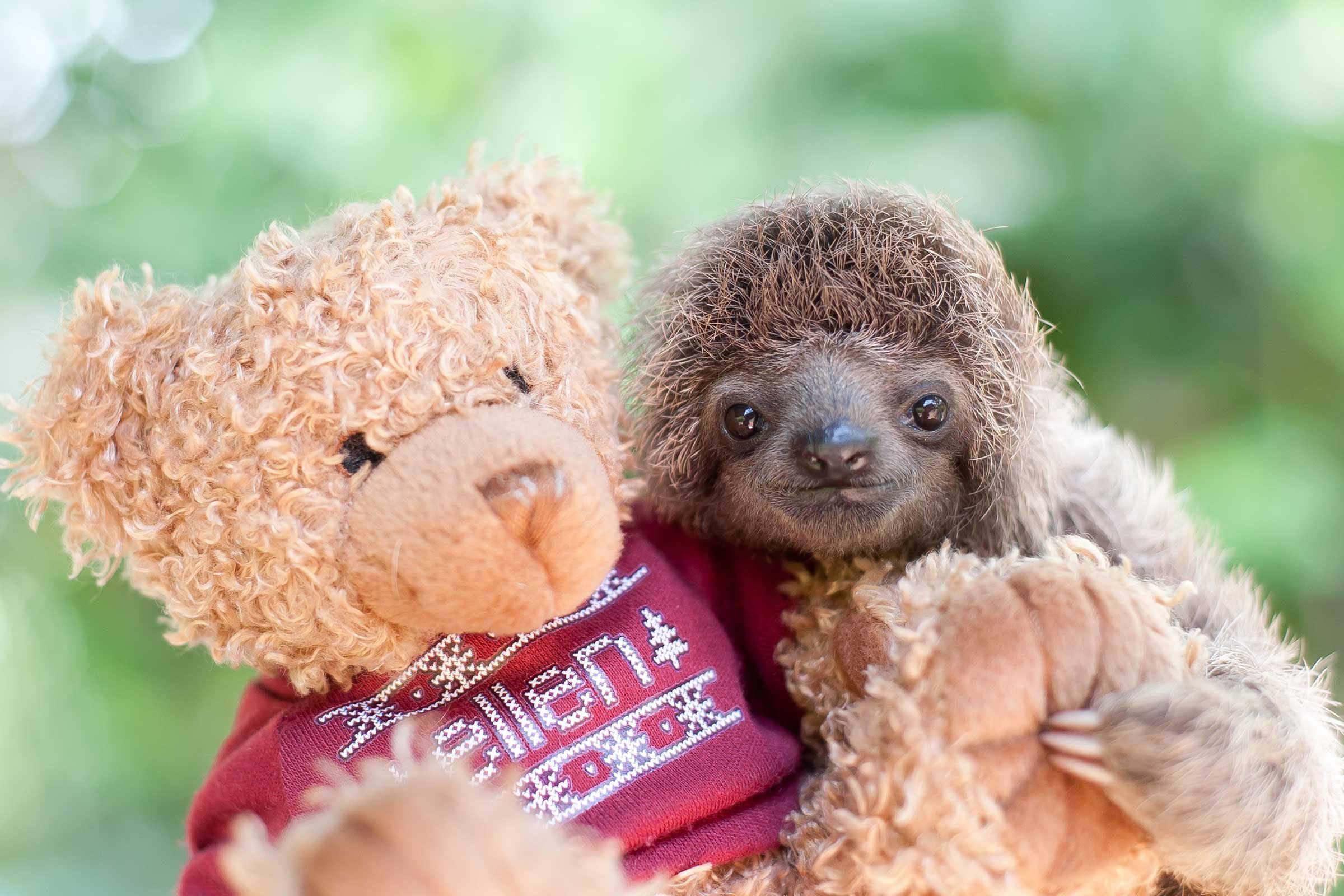 This orphaned sloth was brought to KSTR when he was a couple of weeks old. It’s not known what killed his mother but possible threats include dogs, cars, electric wires, or deforestation. Due to his “crazy hair and sweet disposition,” Trull named him Chuck after her late father. Like others in his species, Chuck loves to cuddle. In the wild, sloths spend their early months holding on to their moms, so at KSTR, orphans are given stuffed animals to grip onto. 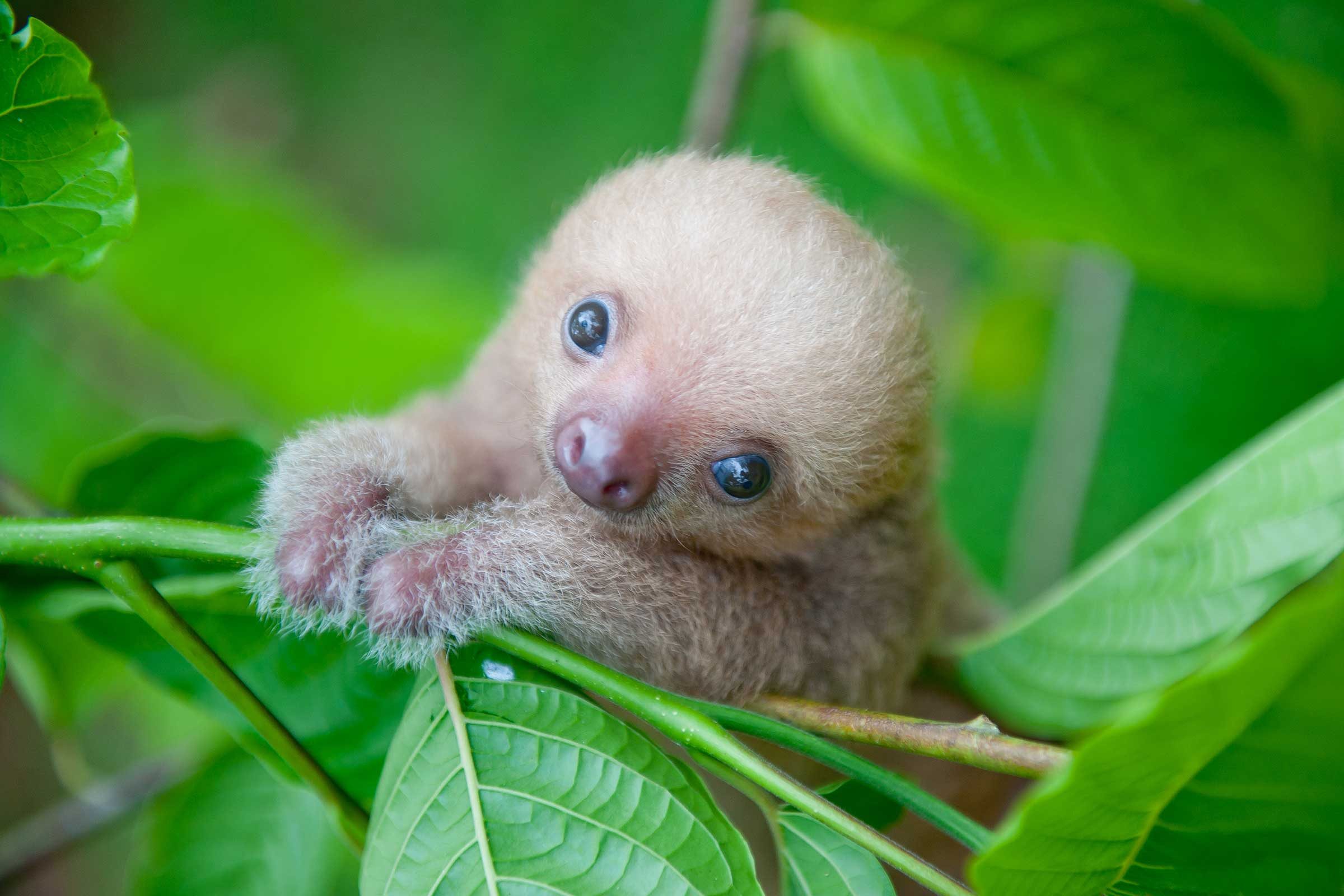 The common terms used are two-toed sloths and three-toed sloths, but those are misleading, says Trull. In fact, all sloths have three toes, but they have either two or three fingers on their “hands.” Kermie, here, is a two-fingered sloth, and this variety is near-sighted and nocturnal. Although their diet is primarily plant-based, sloths also eat eggs, insects, and small invertebrates. See if you can spot the animals camouflaged in these photos. 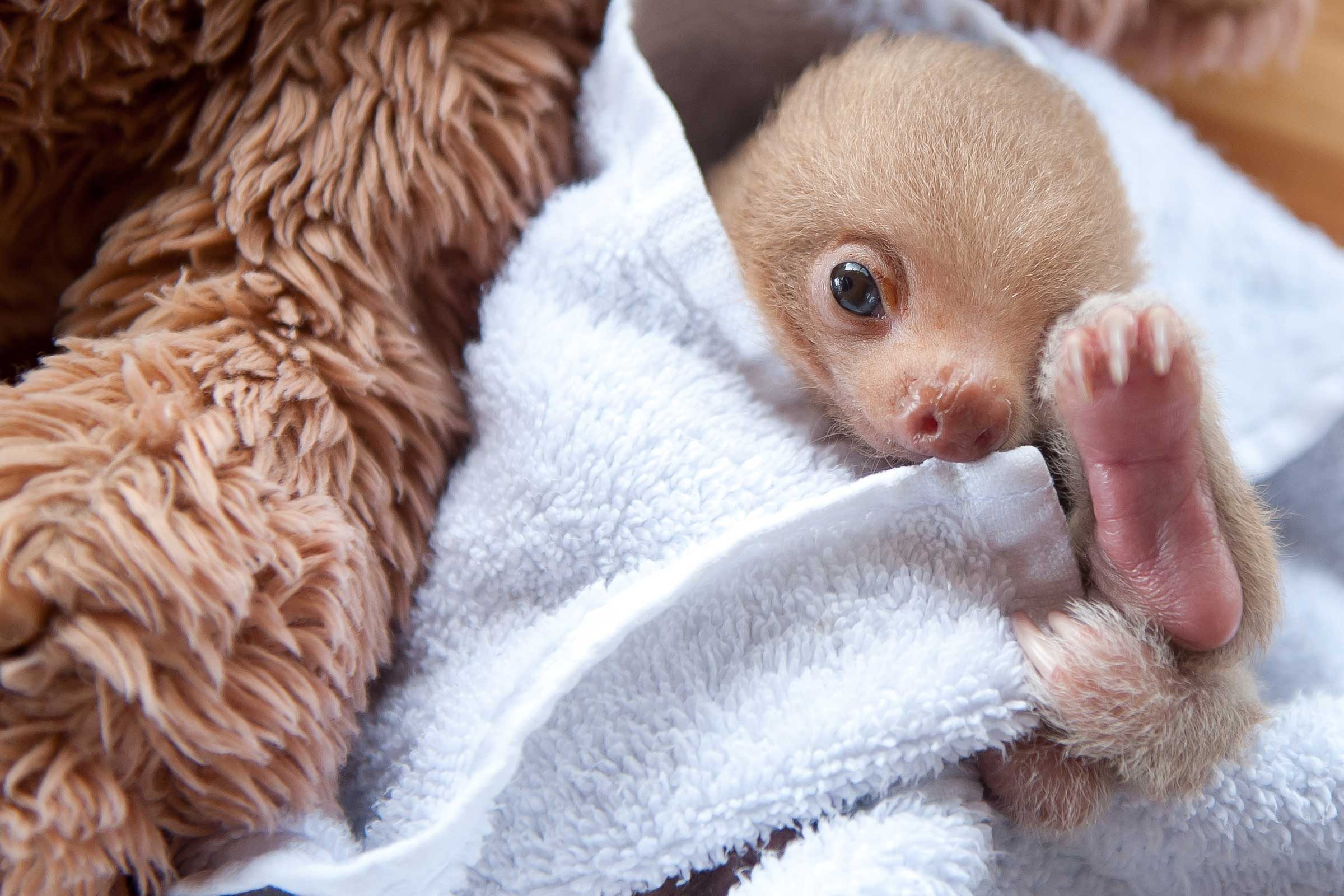 Kermie and Ellen: Barefoot and fancy-free

Three-fingered sloths have hair everywhere except for their noses. Two-fingered sloths like Kermie are hairless on their faces, palms, and soles of their feet. Kermie was the first newborn sloth that the author cared for and the first of her charges to be released into the wild. In the fall of 2015, he was placed in a wilderness area in a large soft cage (along with a sloth named Ellen). This was so that they could adjust to the temperature, smells, and sounds of their new home. Food was still provided daily by KSTR staff, and after a while, the door to their cage was opened. Both Kermie and Ellen wear radio collars, so Trull can know where they roam. 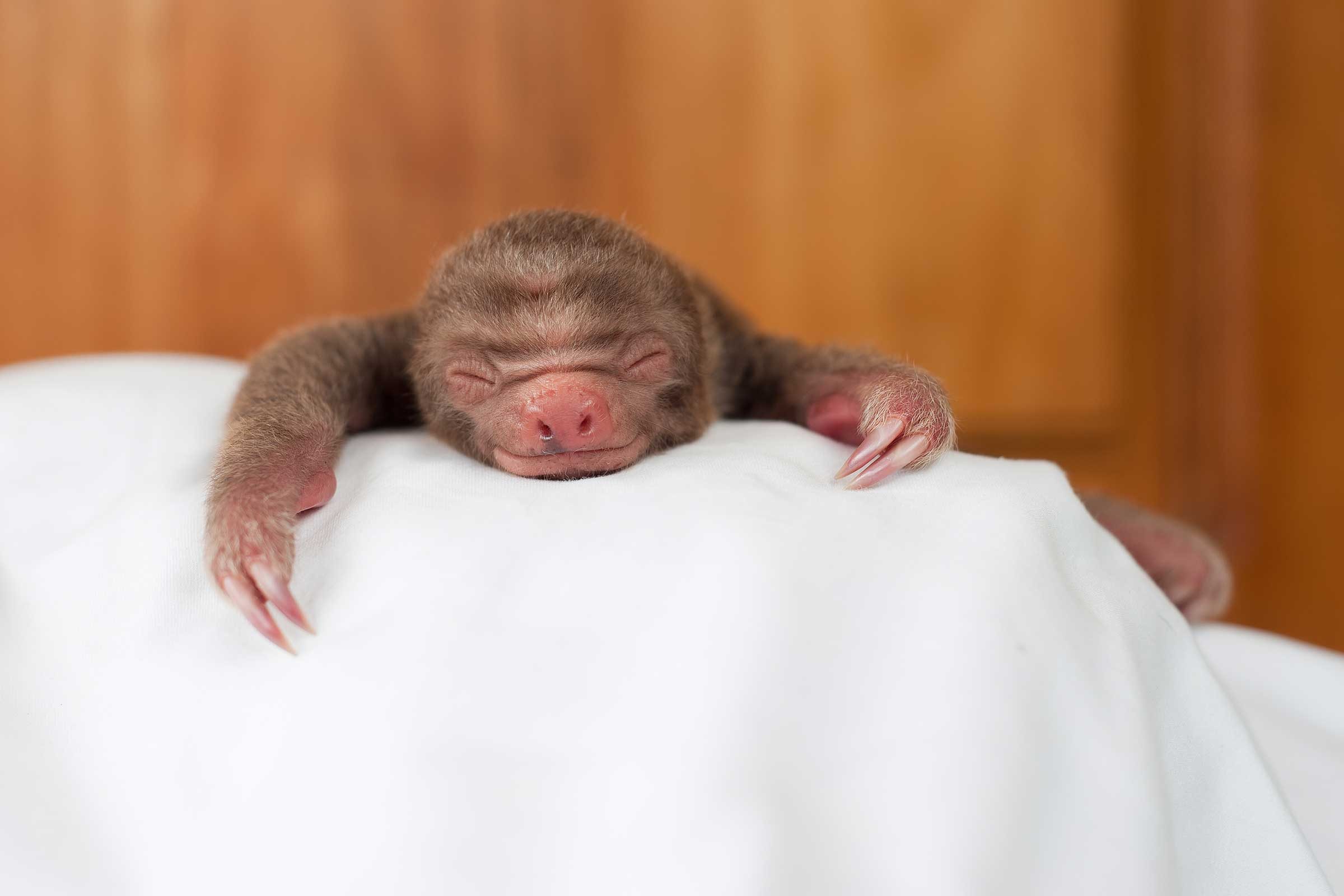 Tiny: Secret of the sloth smile

Here, Tiny shows off his best sloth grin. Sloths always look like they’re smiling because that’s the natural configuration of their facial muscles. Still, you can tell that a sloth is in a good mood when it is stretched out, showing it’s relaxed. Tiny’s claws are transparent because he’s very young, but they will become an eggshell color when he matures. These sloth pictures are pretty cute, but these are the most adorable animals of all time. 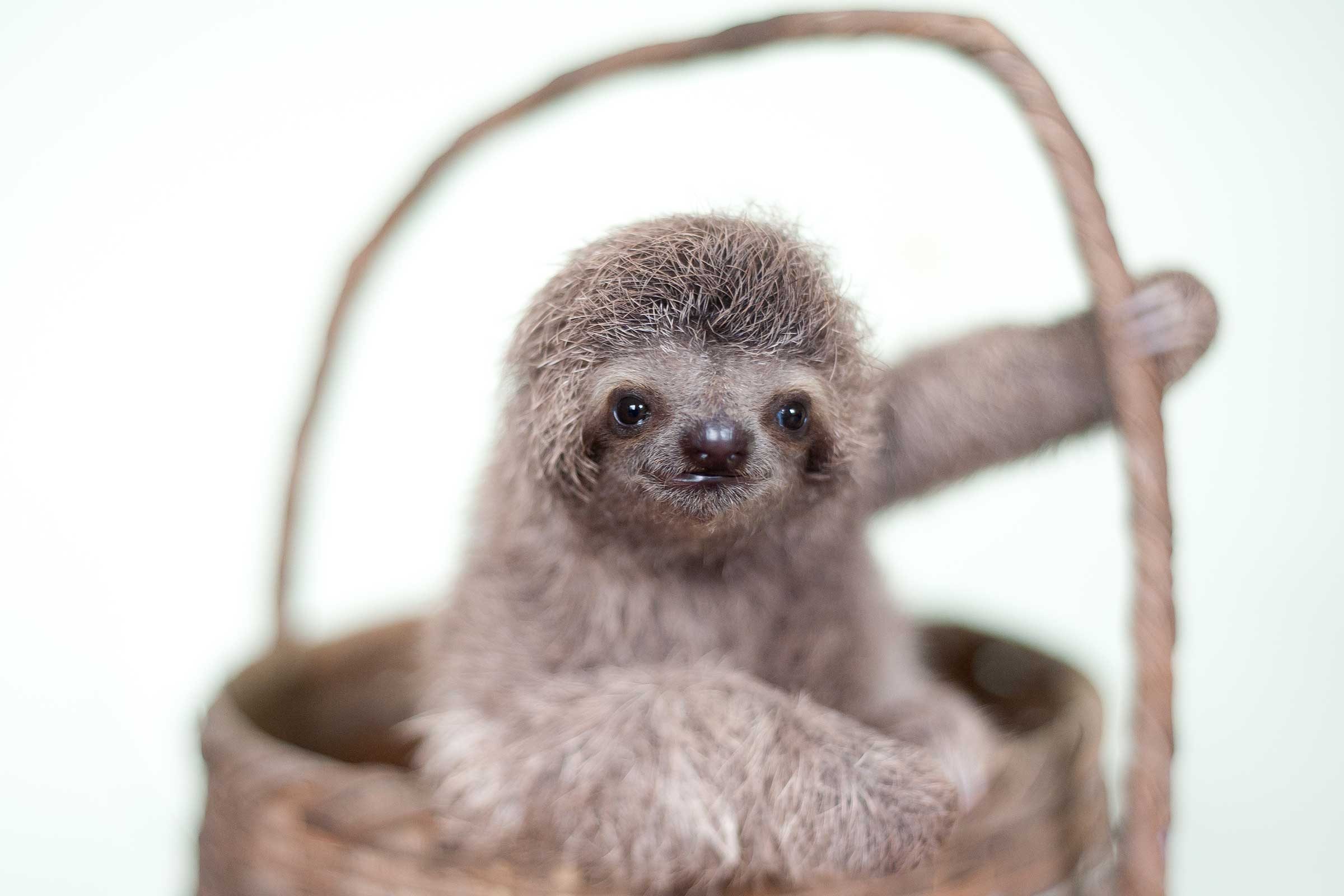 Although moms aren’t supposed to have favorites (and that goes for sloth moms, too), Trull will admit that Monster, here, holds an extra-special place in her heart. Monster was taken in by KSTR when she was just two weeks old. Sloths that young need to be fed every two hours, and Trull carried Monster wrapped to her chest to provide comfort. 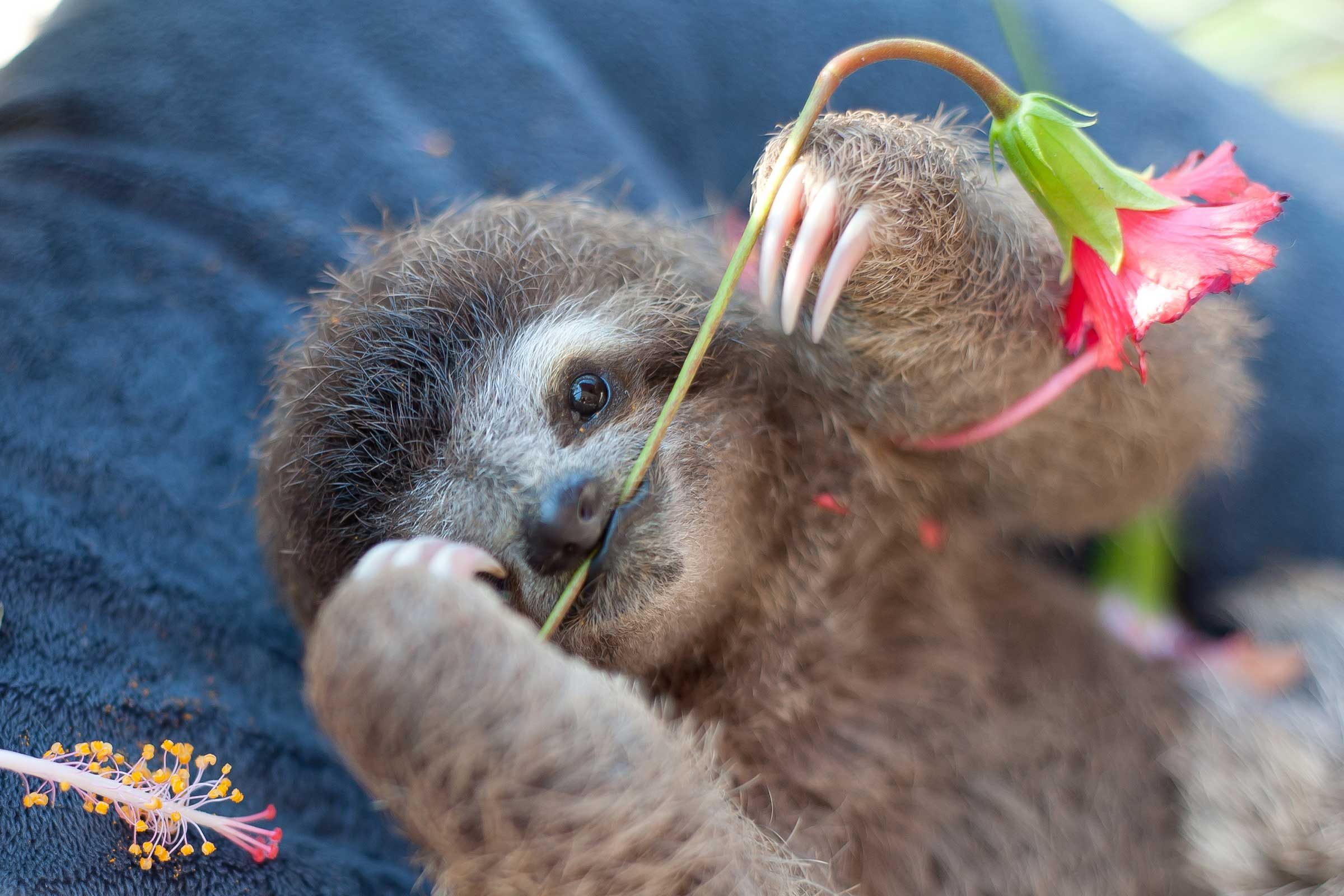 Monster, like other three-fingered sloths, is a herbivore. Her favorite foods are hibiscus flowers, cinnamon leaves, and guarumo fruit. In February 2016, she and another sloth, Piper, were released into the wild, but they are being monitored via radio collar by Trull and her staff. If you want a good laugh, check out these funny animal pictures. 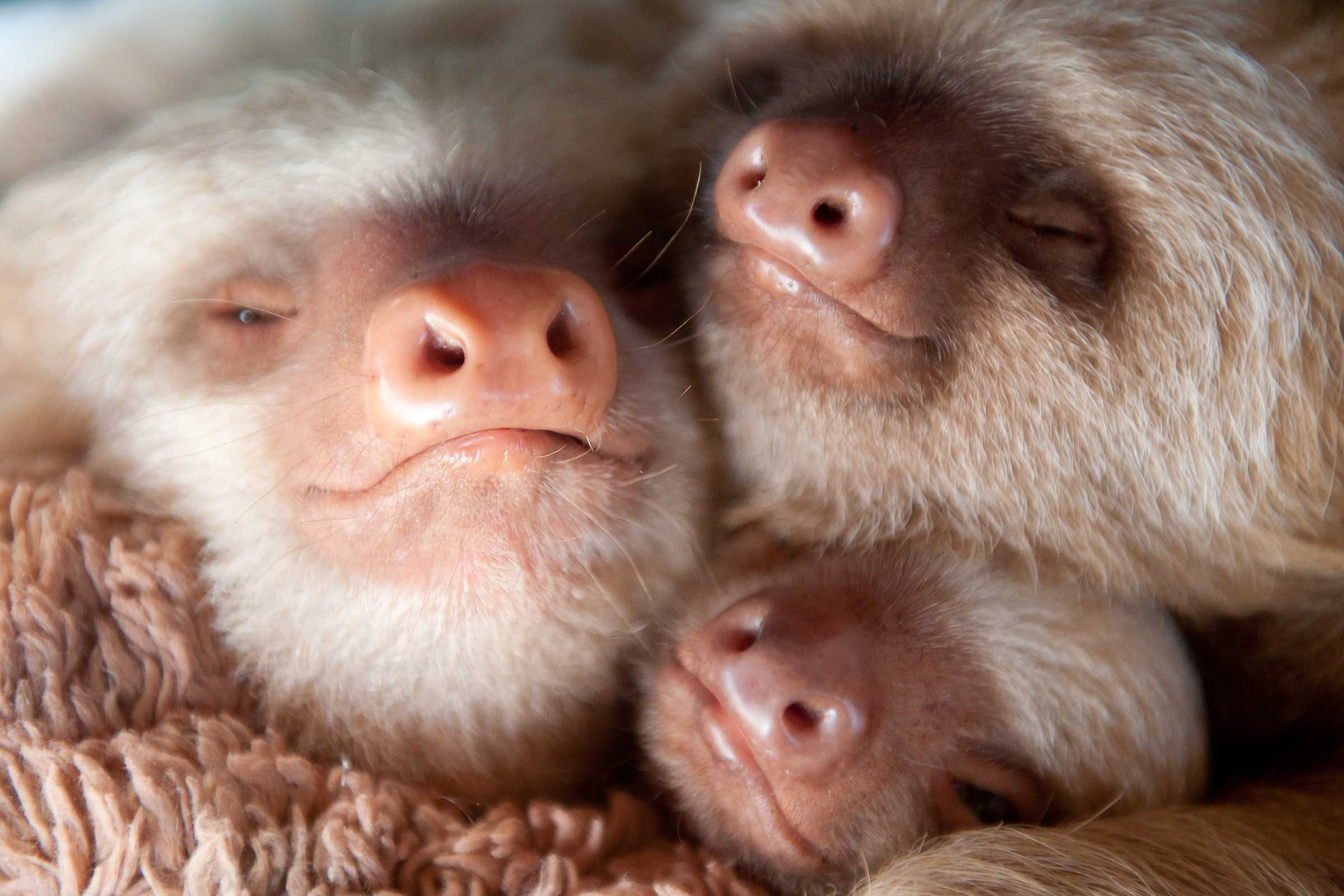 Scientists have reported that sloths are solitary creatures, but Trull believes their finding may be due to the fact that in the wild, the animals can be hard to observe closely. At the Sloth Institute, Trull’s orphans show distinct preferences for one another. 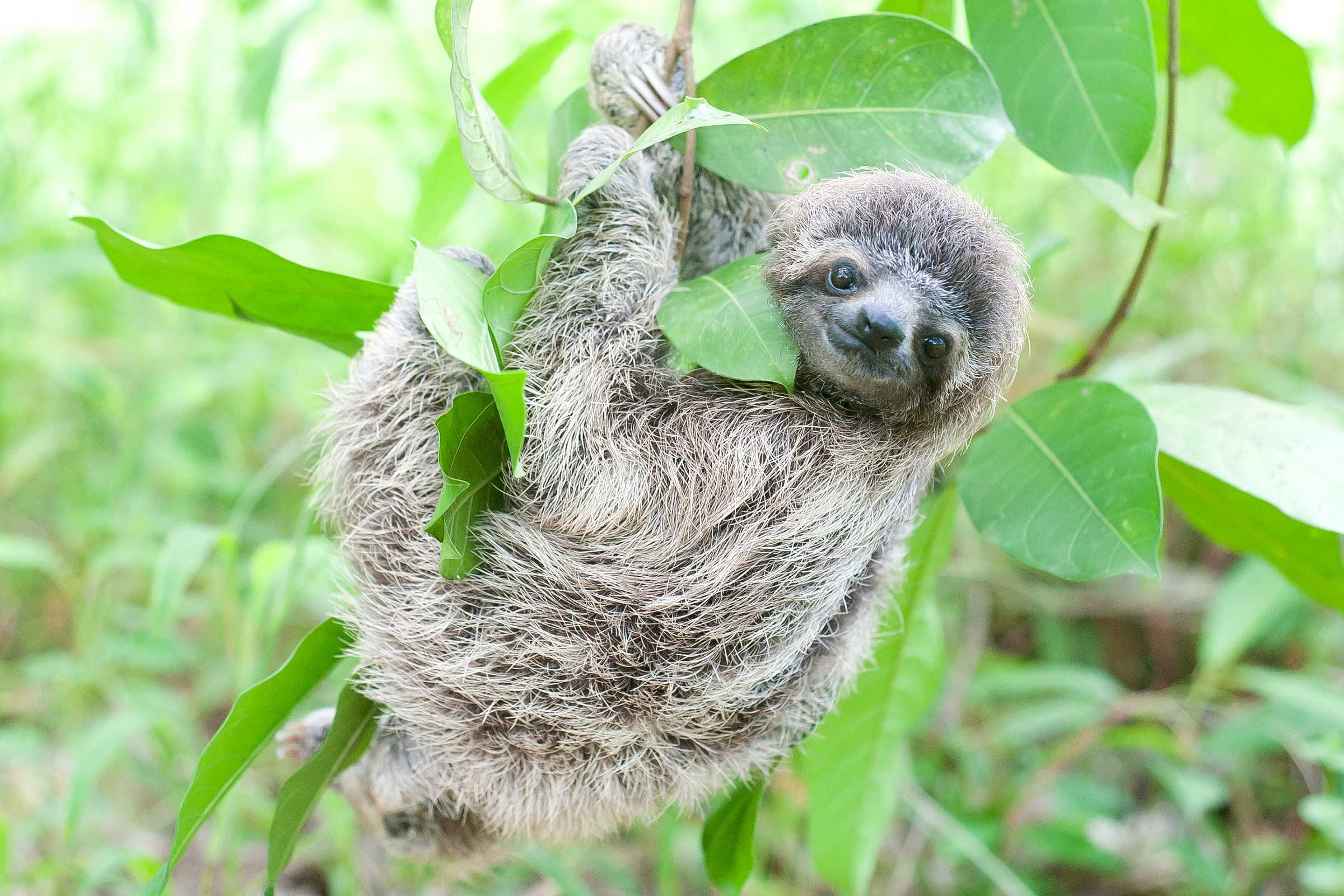 Chuck: Up in the air

Here, Chuck hangs from a tree. Sloths typically spend most of their time in trees, but they are also excellent swimmers. 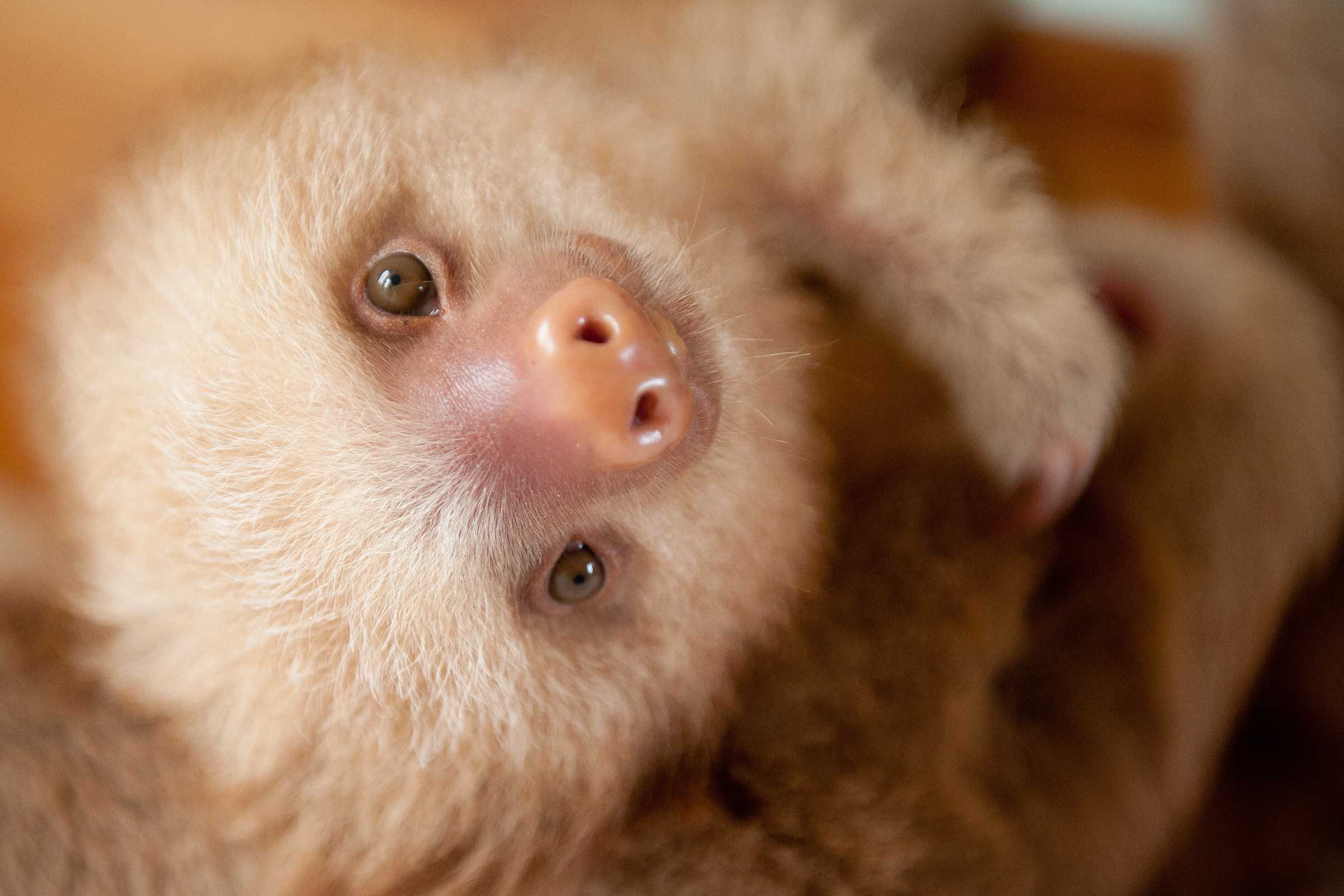 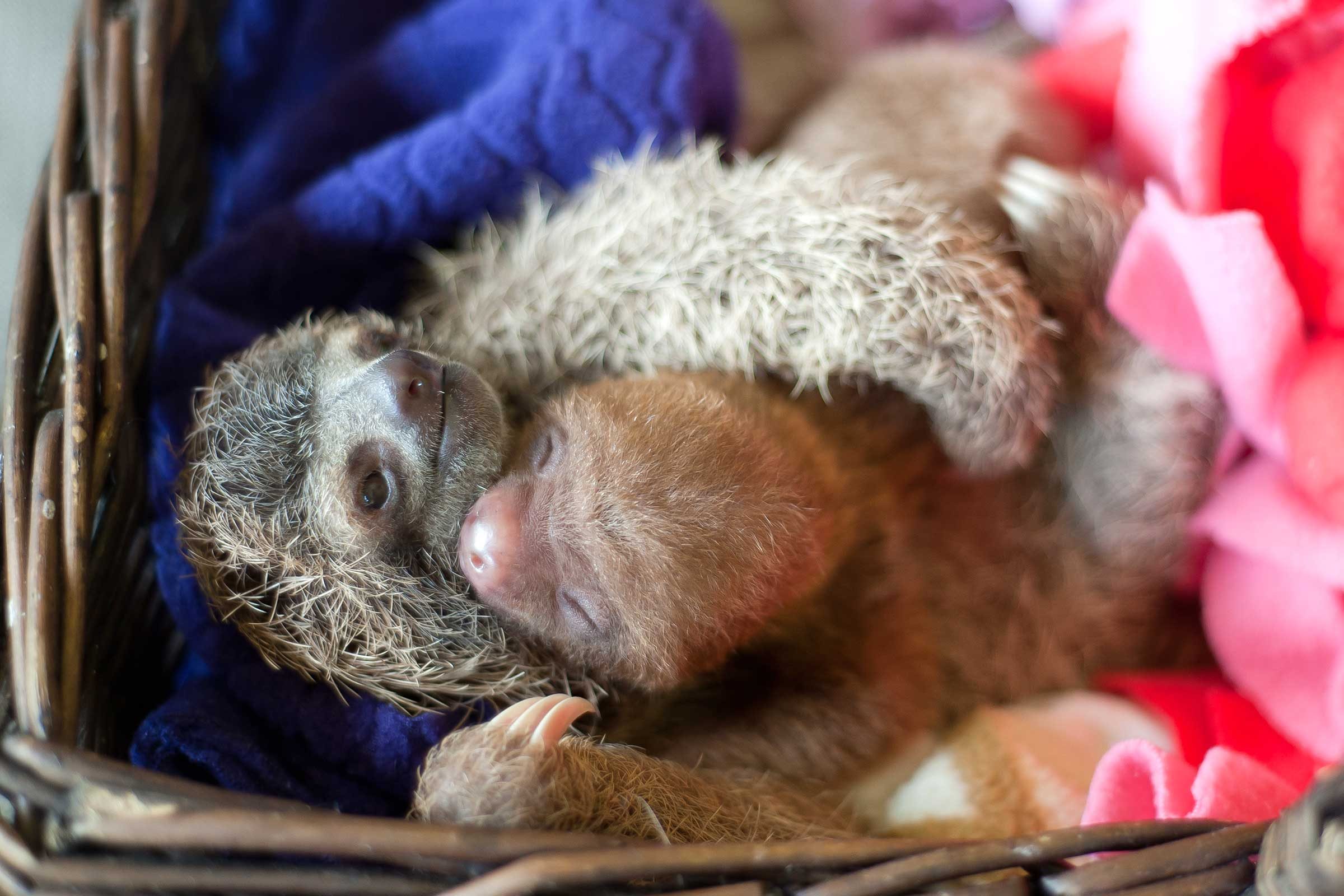 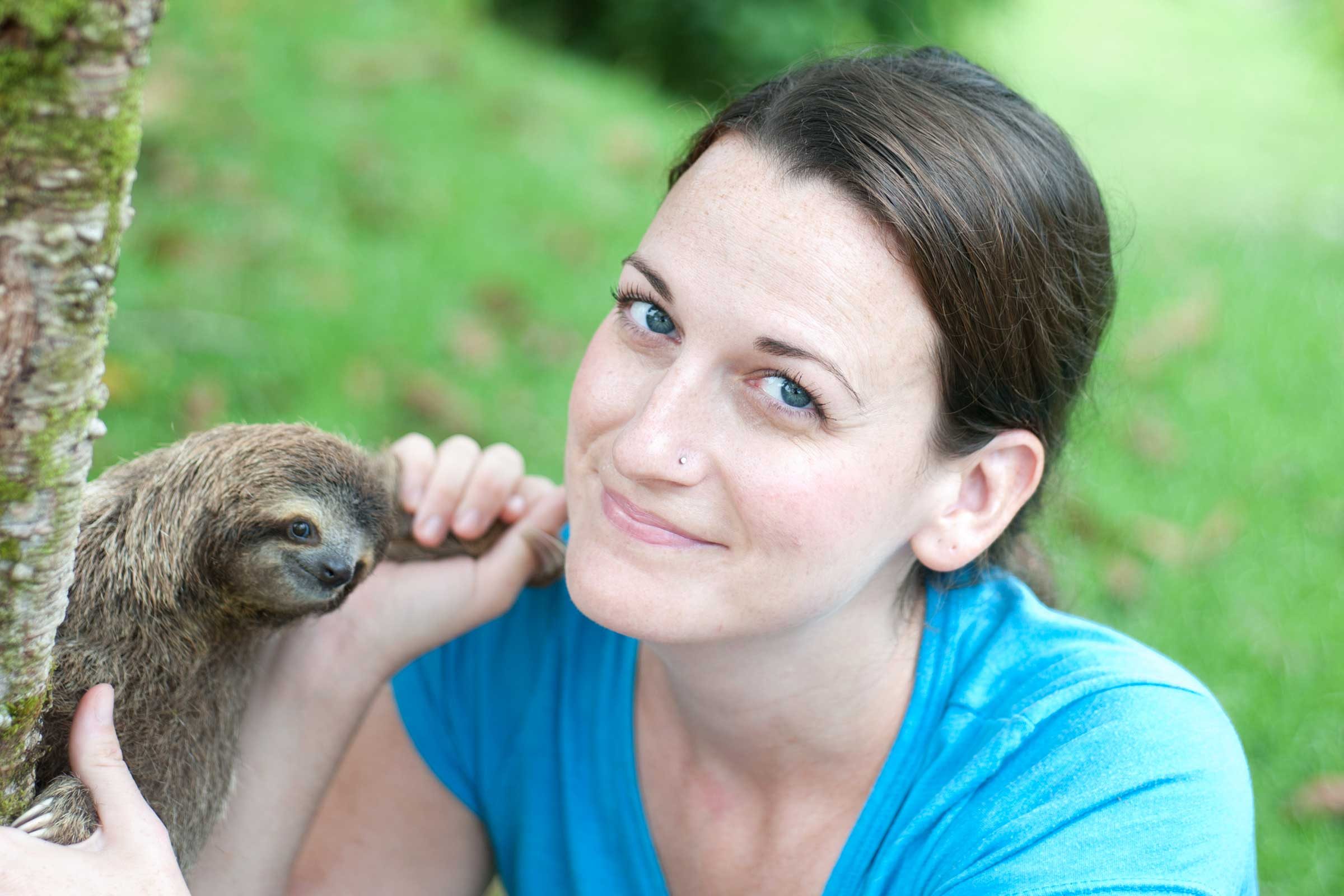 Why help sloths? “Without animals, we would have no forests, and if we had no forests we would die,” Sam Trull said in an interview. “Everybody is interconnected, and we need each other to survive. So if we don’t care about what’s going on with the animals in the forests, then we’re basically saying that we don’t care about ourselves.” While Trull and her staff have bonded closely with the sloths in their care, Trull cautions that they do not make good pets. They are extremely high maintenance, and they have a vicious bite. 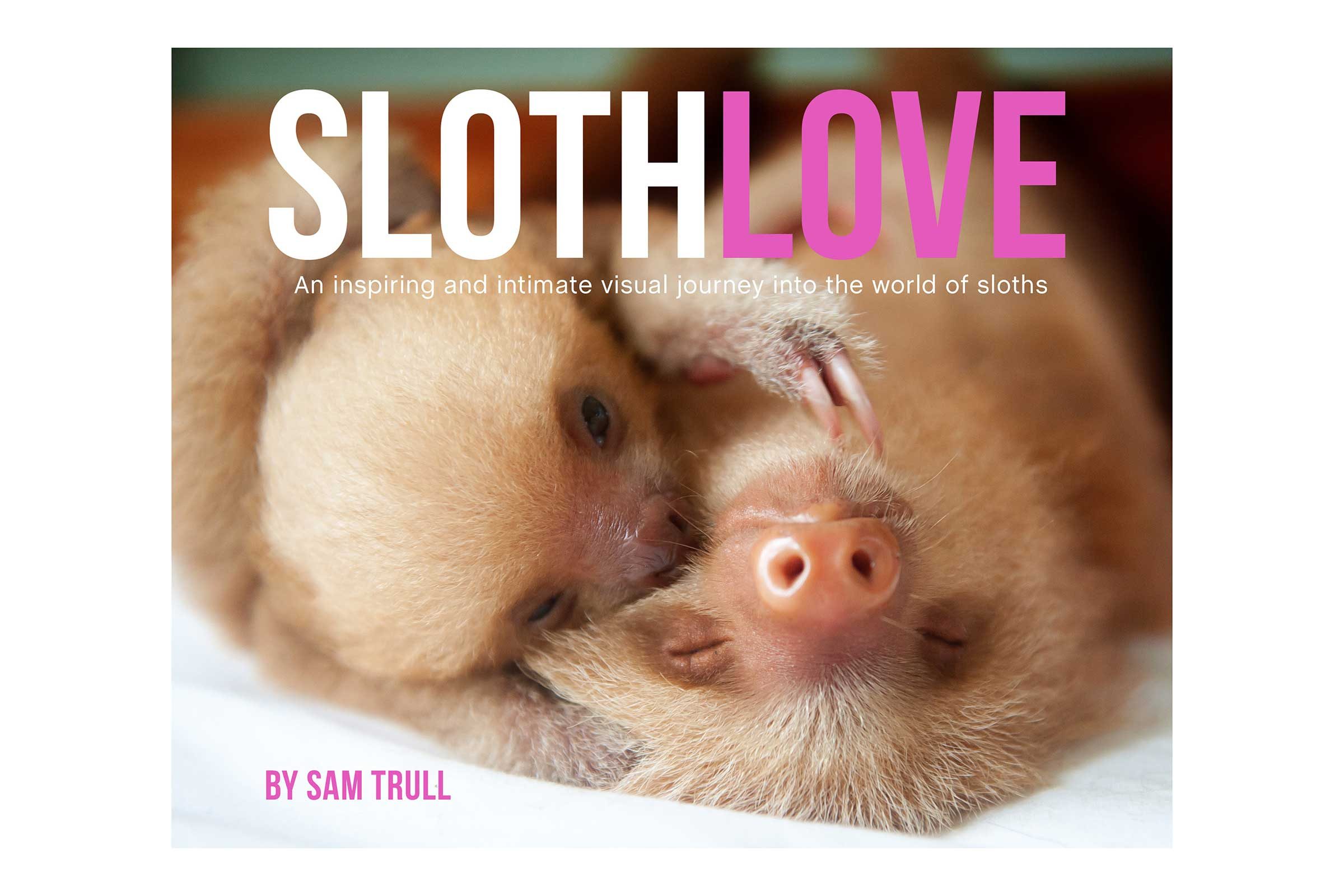 To see more adorable photos of sloths and to learn more about their singular lives and how Trull is helping at the Sloth Institute, check out the book Slothlove (Inkshares). A nature lover, Trull began taking photographs of the wild world around her in 2010. Once you’re done cooing over these insanely cute sloth pictures, see what the most popular cat breeds look like as kittens.