Going on a date doesn't have to be expensive. Try these delicious date-night recipes that are as affordable as they are delicious. 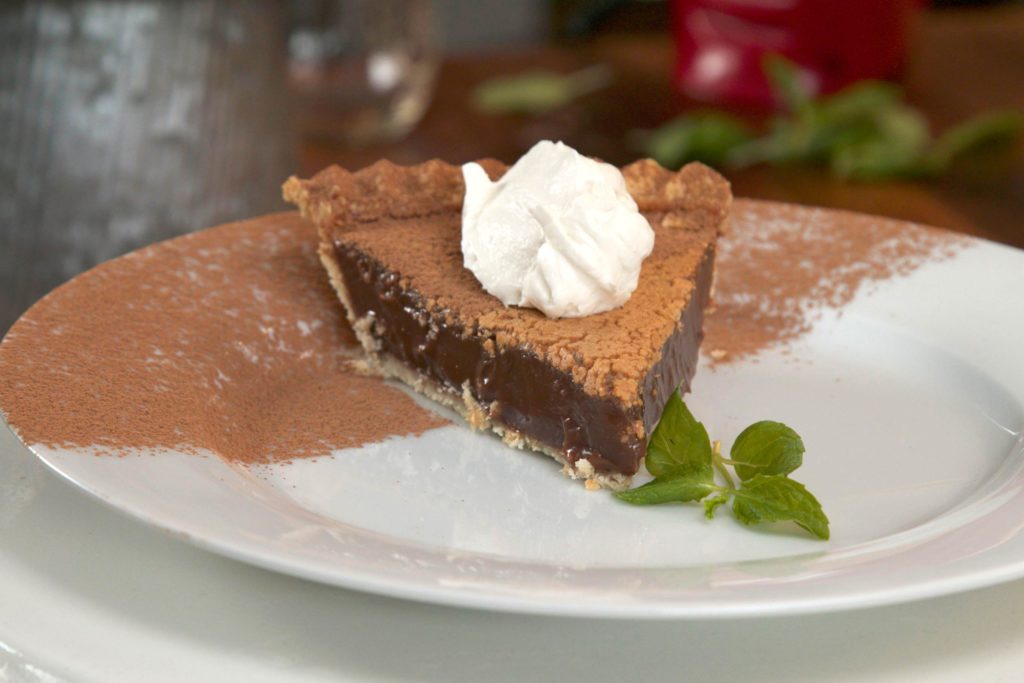 For sheer romance, skip dinner and head straight to dessert. “The best date night meal is dessert and a chocolate chess pie at that,” says Catarah Hampshire, co-owner of Southern Girl Desserts, a dessert company based in Los Angeles. Never heard of one? It’s an old southern recipe and the name is said to have derived from the furniture chest used to store pies and other baked goods to protect them from the elements. The gooey chocolate filling is sure to get the home fires burning.

Preheat oven to 300 degrees. Start by combining sugar, flour, salt, and cocoa into a bowl. Beat eggs into bowl one at a time, then add melted butter, vanilla, and milk and mix until smooth. Pour into par baked pie shell (bake shell in oven for 10 minutes before adding mix). Then bake entire pie in oven for one hour or until the filling is set. Cool in fridge for two to three hours and serve cold. Here are some more cheap date night ideas. 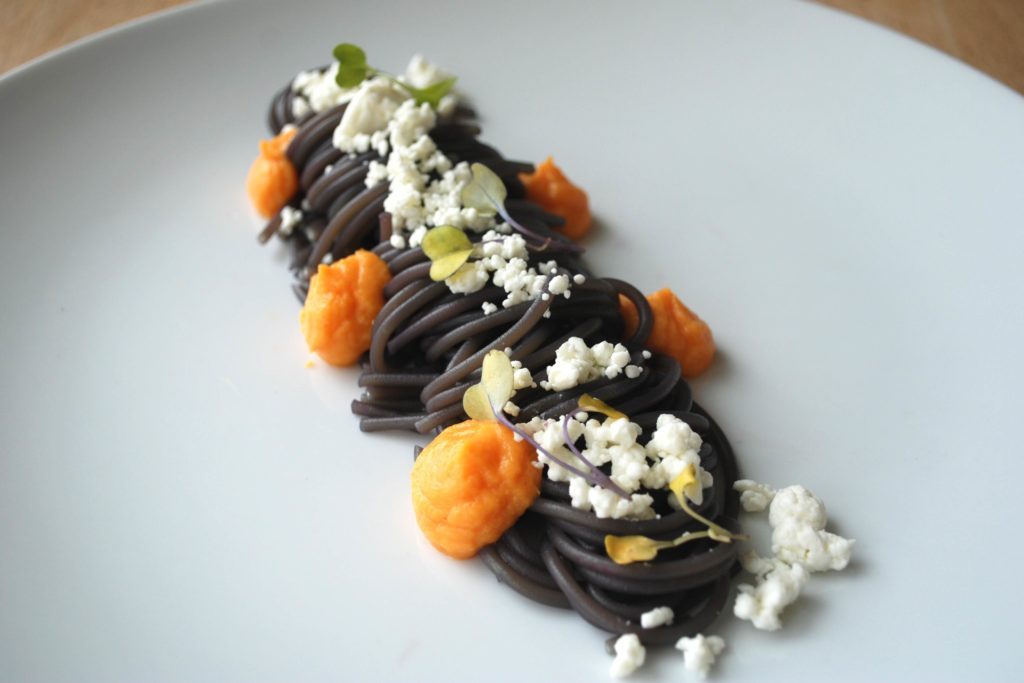 Chef Derrick Fox is best known for his appearance on Fox TV’s Master Chef. “The great thing about this recipe, it’s very colorful, sexy, light, and vegetarian! ” Fox says. “It can also be a great appetizer or first course.”

For the carrot puree: peel and chop your carrots in to ¼ inch pieces. In a medium pot, boil carrots until tender. Strain the carrots and place in a blender. While carrots are hot in the blender, add the butter and ½ of the cream. As you’re blending, add the rest of the cream until the puree is a pleasing consistency. (If its not creamy enough add more cream.) Once smooth, return to the pot, cover and keep warm on your stove.

For pasta, in a medium sauce pot, bring the beet juice to a boil. (The pasta will take on the purple color and flavor of the beet juice.) Add 2 servings of spaghetti and cook until al dente. Stain your pasta. 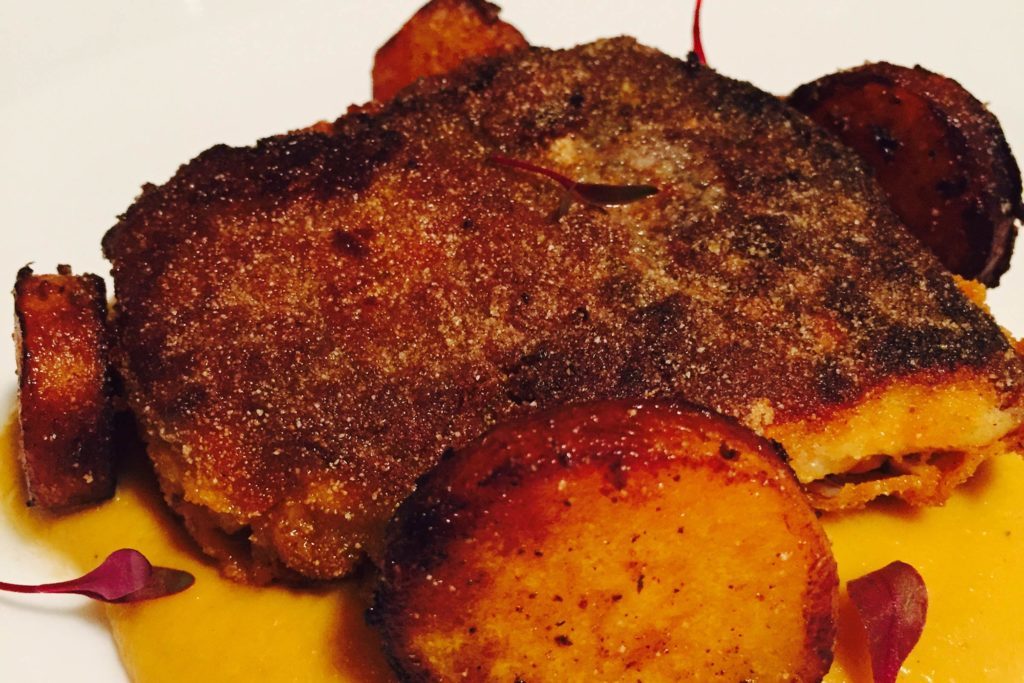 Chef Aarthi Sampath was the first Indian female chef to win the Food Network’s Chopped and currently works at the Michelin-starred Junoon restaurant in New York. Sampath says this is the perfect money-saving date night recipe because it uses seasonal ingredients. It is a very sensual dish, she says, as the puree is velvety and slightly sweet, the fish is crisp, yet absolutely tender inside and it’s a simple, healthy dish full of flavor. Just make sure not to make any of these common mistakes when cooking fish.

For the sautéed butternut squash:

Marinate the fillets for 30 minutes with all the ingredients except semolina. Pat dry then crust with semolina. Shallow fry in a non-stick saute pan at medium heat until crust is crisp.

For the puree: Heat butter. Add cumin and ginger, then the cubed squash. Cover with water or vegetable stock and allow to cook. Season and puree well. For the sautéed squash, heat butter in the same pan that was used to fry the fish, add the squash pieces and allow to brown on one side before you flip. Then add a splash of water, cover for a couple of minutes until a skewer or fork passes through it without resistance.

To plate: add a couple of spoonfuls of warm puree, place the fish and a few pieces of the butternut squash. Squeeze a fresh lemon on top. 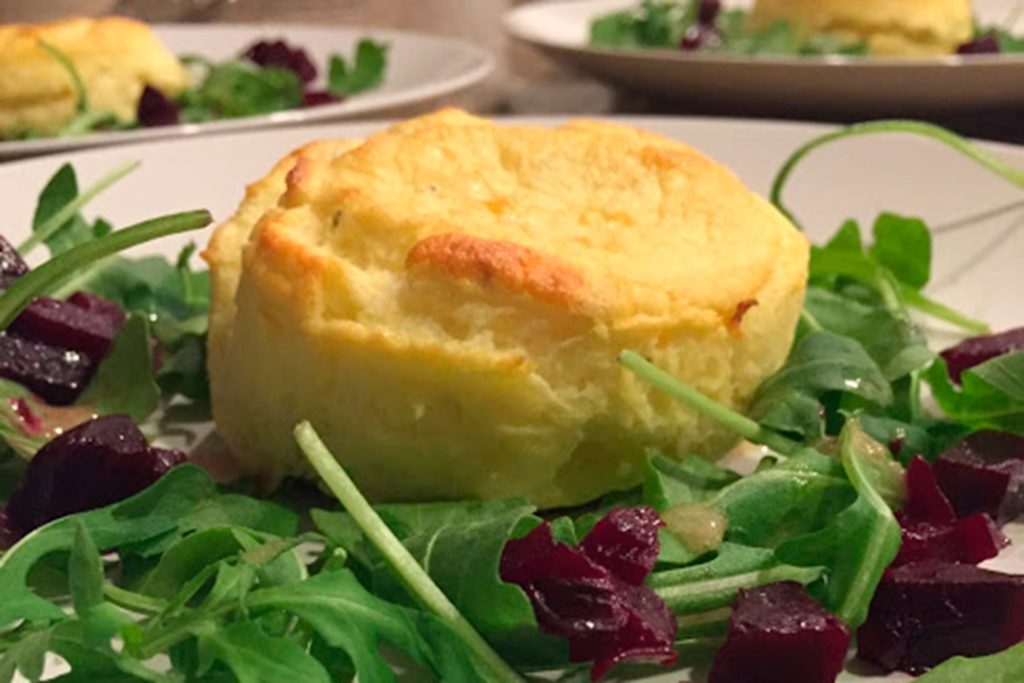 Chef Sean Forsha works preparing nutritious and delicious meals for the children at Little Owl Preschool in Long Beach, California and also hosts exclusive culinary pop-ups at The Greenbrier. His perfect date night recipe is a double-baked goat’s cheese soufflé with pickled beets and toasted pistachios. “I think it works as a date night dinner option because it’s rich and tasty without being too heavy, and it comes out looking so sexy and complex while all the preparation is done far in advance. And this is a beautiful and different way to serve the classic pairing of bright, bougie goat cheese and humble, earthy beets,” says Forsha.

For the pickled beets:

Preheat oven to 350 degrees . Butter six 3/4-cup ramekins. Crumble cheeses and set aside. In a saucepan melt butter over moderately low heat and whisk in flour. Cook roux, whisking, three minutes and whisk in milk. Bring mixture to a boil, whisking constantly, and simmer, whisking occasionally, 3 minutes. Remove pan from heat and add yolks, mustard, 1 teaspoon thyme, two-thirds cheese, and salt and pepper to taste, whisking until cheese is melted. Transfer yolk mixture to a large bowl. In another large bowl with an electric mixer beat whites with a pinch salt until they just hold stiff peaks. Stir one-fourth whites into yolk mixture to lighten and fold in remaining whites and remaining cheese gently but thoroughly. Divide soufflé mixture among ramekins and arrange in a large baking pan just large enough to hold them. Add enough hot water to baking pan to reach halfway up sides of ramekins. Bake soufflés in middle of oven until slightly puffed and golden brown, about 20 minutes, and transfer to a rack. Let soufflés stand, uncovered, 30 minutes (soufflés will fall slightly).

Lightly butter a baking sheet. Run a thin knife around edges of soufflés. Invert each soufflé onto palm of your hand and carefully put, right side up, onto baking sheet. Soufflés may be made up to this point 2 days ahead and chilled, covered. Increase oven temperature to 425°F. Bake soufflés in middle of oven until slightly puffed and heated through, about 5 minutes. Serve with pickled beets, shaved goat cheese, toasted pistachios, and arugula.

For the pickled beets:

Trim the beets leaving behind a bit of the tops and a bit of the tail and place in a large pot. Cover with 3-inches cold water and bring to a boil over high heat. Season with salt and reduce heat to a gentle simmer. Cook until beets are easily pierced with a sharp knife, about 45 minutes. While the beets are cooking, combine the vinegar, sugar, and bay leaves in a stainless steel pot and bring to a simmer to dissolve the sugar. Remove from the heat and cool completely. Lastly, remove the beets from the pot as they finish and while still warm rub off their skins with a tea towel. Cut equal portions out of each beet and place in the vinegar-sugar mixture. Cool beets completely in marinade and store in marinade. 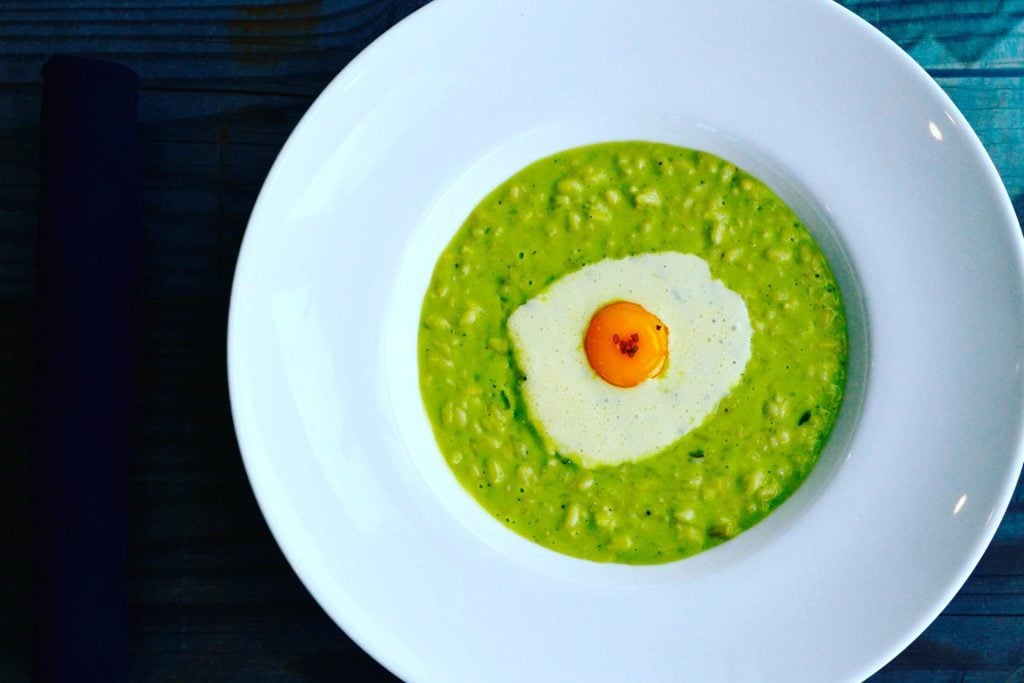 Ajesh Deshpande is the head chef of The Cube, a small wine and cheese bar in Naperville, Illinois. Deshpande says when it comes to date night recipe ideas and saving some money, one dish jumps out. “Risotto has got to be one of my favorite things to whip up on date night. Rice, cheese, butter, wine. All of these are good on their own. Put them together and you have a sum which is greater than it’s parts. The ingredients are very straightforward, but it takes some patience, a bit of time, and a lot of attention. The end results? Totally worth it. Just like the person you’re making it for. And trust me, they’ll be insanely impressed when you put this down on the table,” said Deshpande.

Sweat the shallots and garlic in a bit of olive oil and tablespoon of butter at medium heat. Next, add a tiny pinch of salt to the mixture in order to help extract those juices. Then add herbs and a pinch of black pepper to the pan. Follow that by adding the rice to the pan and keep stirring so the rice doesn’t burn. This toasting of the rice in the butter and olive oil adds another layer of flavor. Deglaze the pan with wine, continue to stir. Add 1/2 cup of stock or water to the pan, making sure to continuously stir so the rice doesn’t burn. Once the rice has absorbed whatever moisture is in the pan, add the next 1/2 cup of stock or water. Continue this process until the rice is cooked through and has a slight bite to it. Keep stirring!

Next, take the pan off of the heat and stir in freshly grated parmigiano and second tablespoon of butter. Keep stirring till cheese and butter has melted and emulsified into the risotto. It should have the texture of flowing magma. Check for seasoning, and add salt if needed.

Get creative and top with whatever you’re in the mood for: sautéed mushrooms, braised meats, fried or poached eggs…all are fair game. 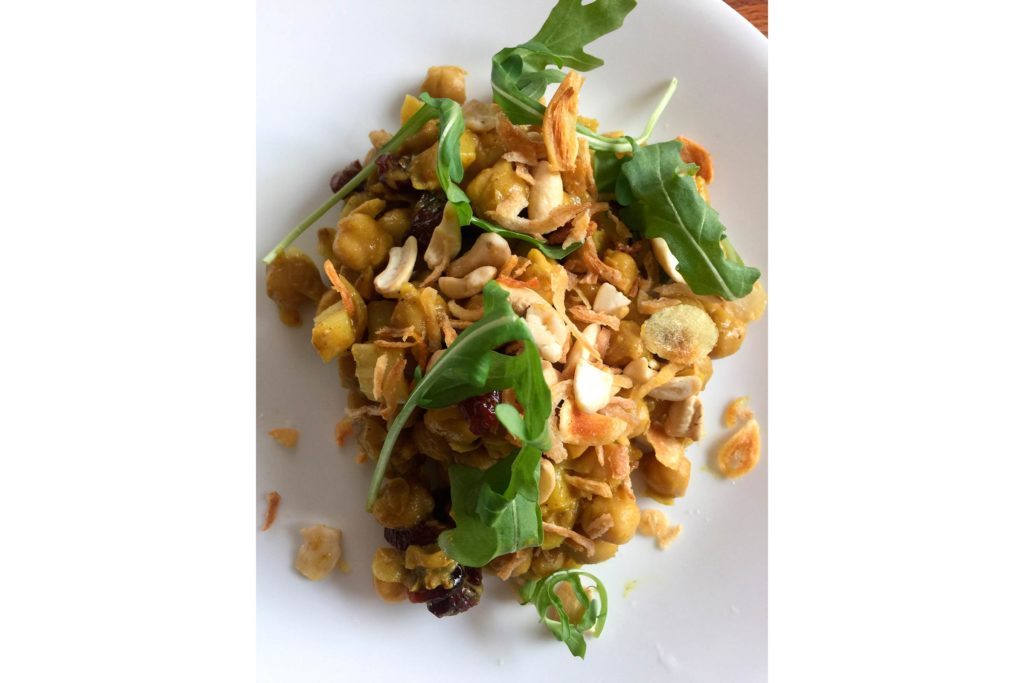 Chef Pat Saphyakhajon began his career at the Ritz Carlton hotel in Los Angeles. Now he heads his own business Another Pat Creation where he works private events. Saphyakhajon says the best romantic dinner ideas for two are ones that are simple, transformative, and delectable. What began as a classic American chicken curry salad sandwich transformed into a delicious vegetarian Indian inspired dish. “It has easy to find ingredients you can find at most supermarkets and they are affordable,” he says.

To make:
Warm up 3 tablespoons of olive oil in a sauté pan on medium heat. Add garlic, onion and ginger to the pan, cook for five minutes. Add the curry powder, turmeric powder, and cumin powder and cook for one minute, then add coconut milk. Continue to cook for three minutes. Season with salt and pepper. Once your dish has cooled down, fold in the celery, apples, and cranberries. To finish: Spoon coconut curry chickpea salad on a plate, garnish with arugula, cashews, and fried shallots. 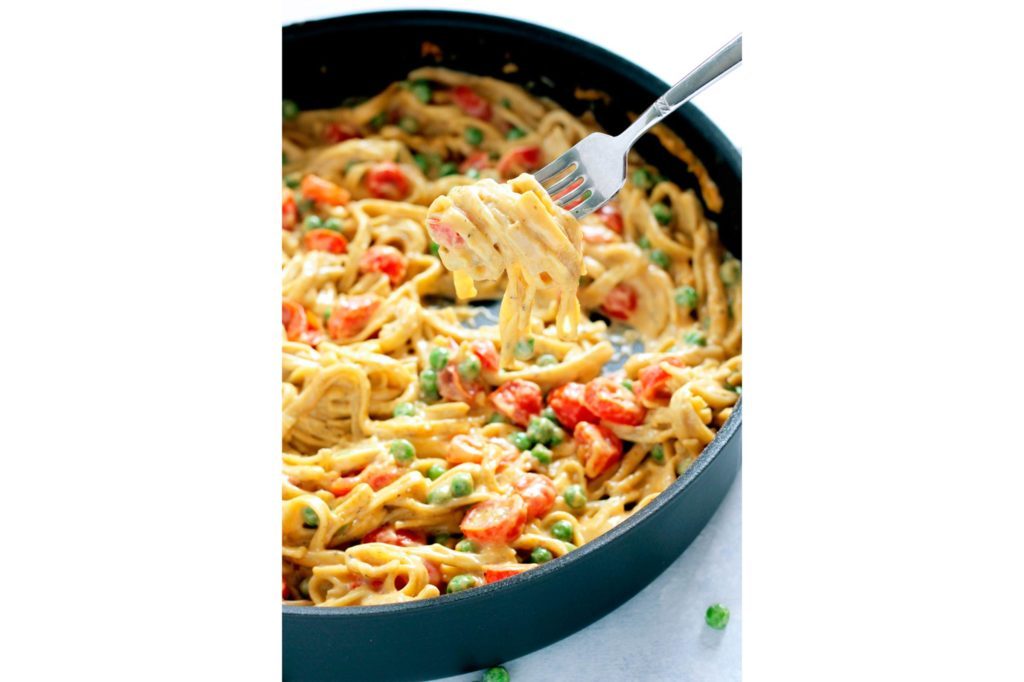 When you cook for date night, a one-pot dish is a relief because it makes the whole night easier—especially clean up. New-Jersey based vegan food and lifestyle writer, Jennifer Rossano runs NeuroticMommy and her perfect date night recipe is a fettucccine alfredo. “What makes this recipe unique is that it’s a vegan fettuccine Alfredo sauce instead of one being made up of dairy. It’s creamy, healthy deliciousness all in one pot. Not only is this budget friendly, it’s warm and ready in just 20 minutes. Get the full recipe on NeuroticMommy.com. 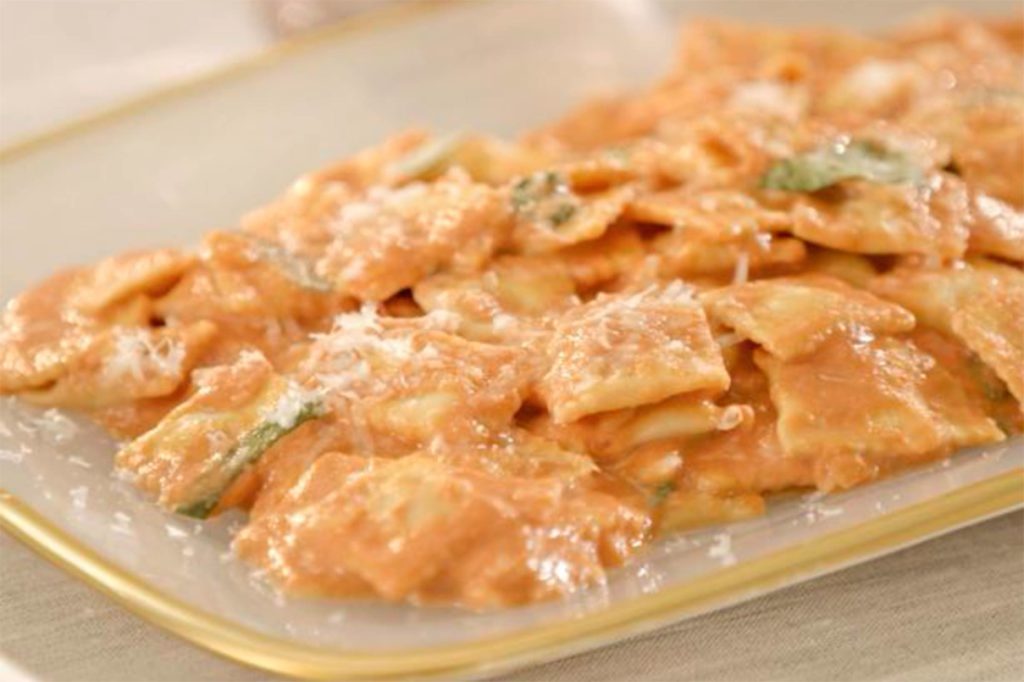 Ravioli is the perfect date night Italian meal, and that’s according to Giada De Laurentiis, the host of Giada at Home airing on the Food Network. “Ravioli are great for date night because they’re quick, easy, and impressive. These are tossed in pink sauce which makes them feel decadent, and they’re fairly inexpensive because they’re meat-free.” Get the recipe on giadzy.com.