Get ready to travel back in time to see what you missed over the years! 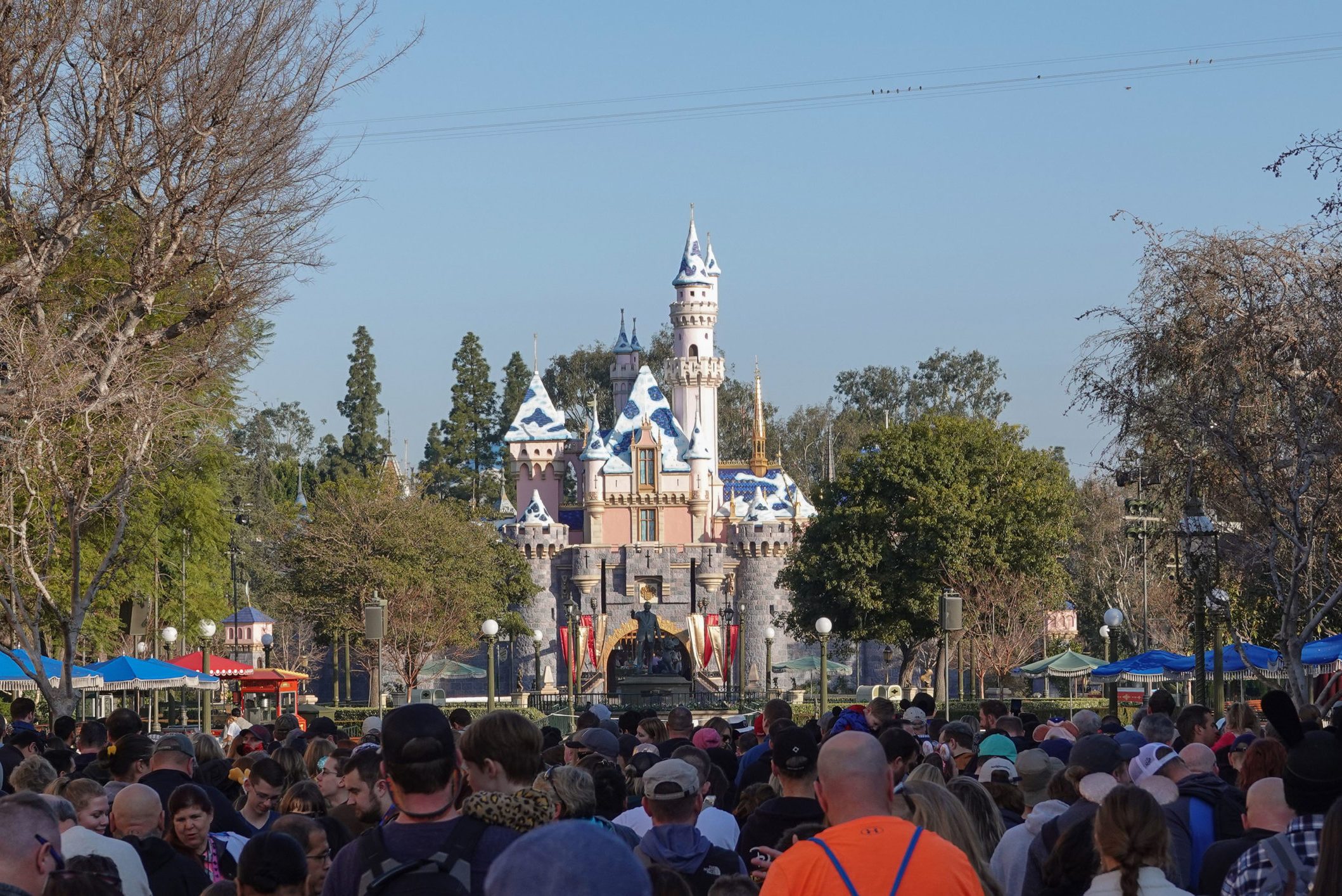 Out with the old, in with the new

Walt Disney once said, “Disneyland will never be completed as long as there is imagination left in the world.” That statement still holds true today, 65 years after Disneyland first opened to the public. The people at Walt Disney Imagineering, the creative and design team of the Disney parks and resorts around the world, are consistently coming up with new ideas to allow visitors to feel like they’ve just stepped into their favorite Disney film. But sometimes, for something new to debut at the park, something else has to leave, like these Disneyland attractions from once upon a time. While we understand that things change, we also wish that these discontinued Disney rides could come back. 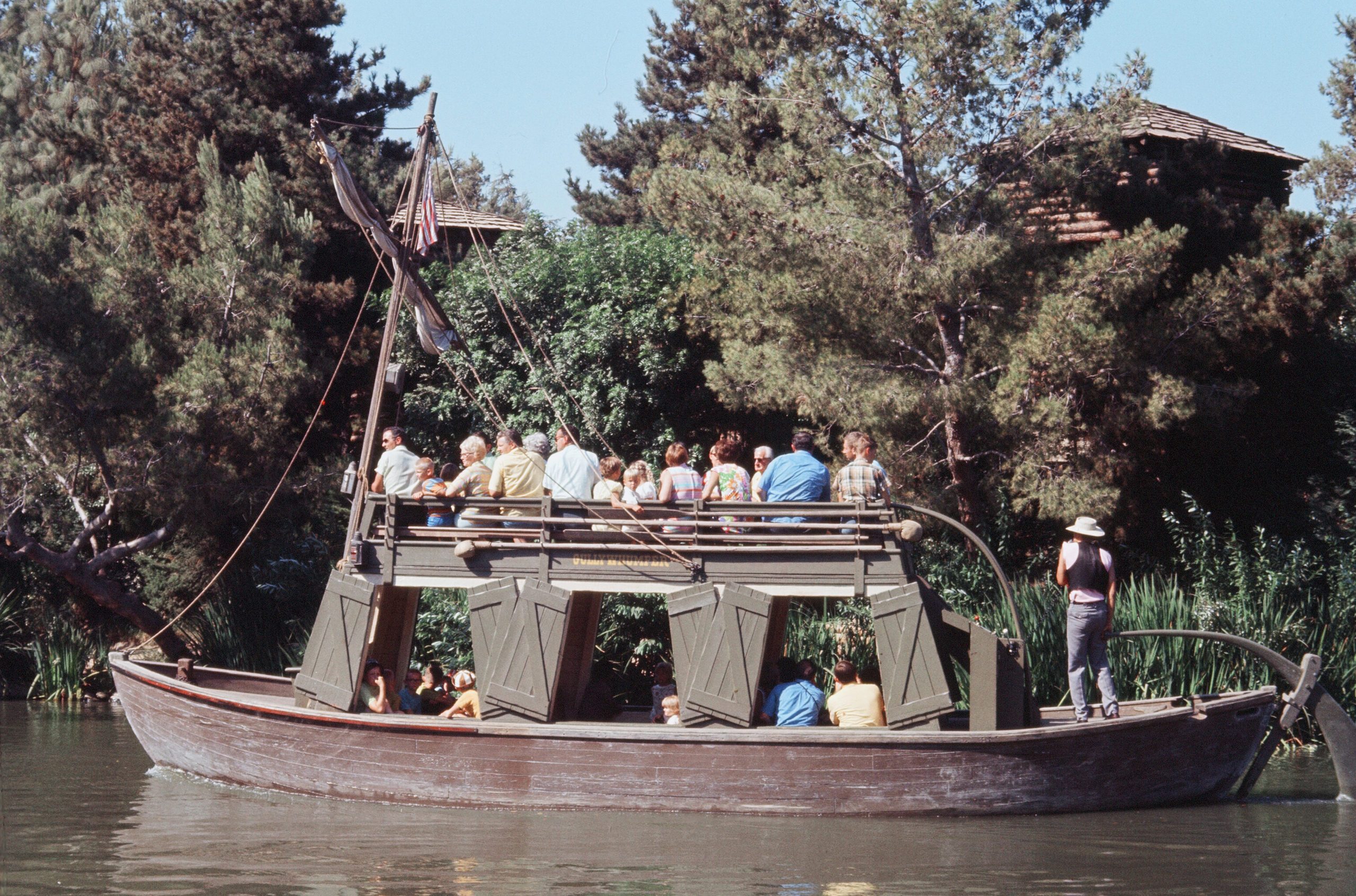 Named after a legendary American frontiersman, Mike Fink Keel Boats used to take guests on a tour around the Rivers of America and Tom Sawyer Island at Disneyland. When Disneyland opened, ticket books were used as a form of payment for each attraction. Attractions with A, B, or C ratings were considered lower thrill, while D and E ticket attractions were more desirable, which meant they cost more money to ride. The Mike Fink Keel Boats were a C ticket, while other boats like the Mark Twain Steamboat and Davy Crockett’s Explorer Canoes were higher priced at a D ticket, even though they took the same path around Tom Sawyer Island. The boats eventually went out of commission in 1997, after one tipped over with guests on board. Nothing ever replaced them, making these boats a mere memory, just like these Disney characters you can’t meet in the parks anymore. 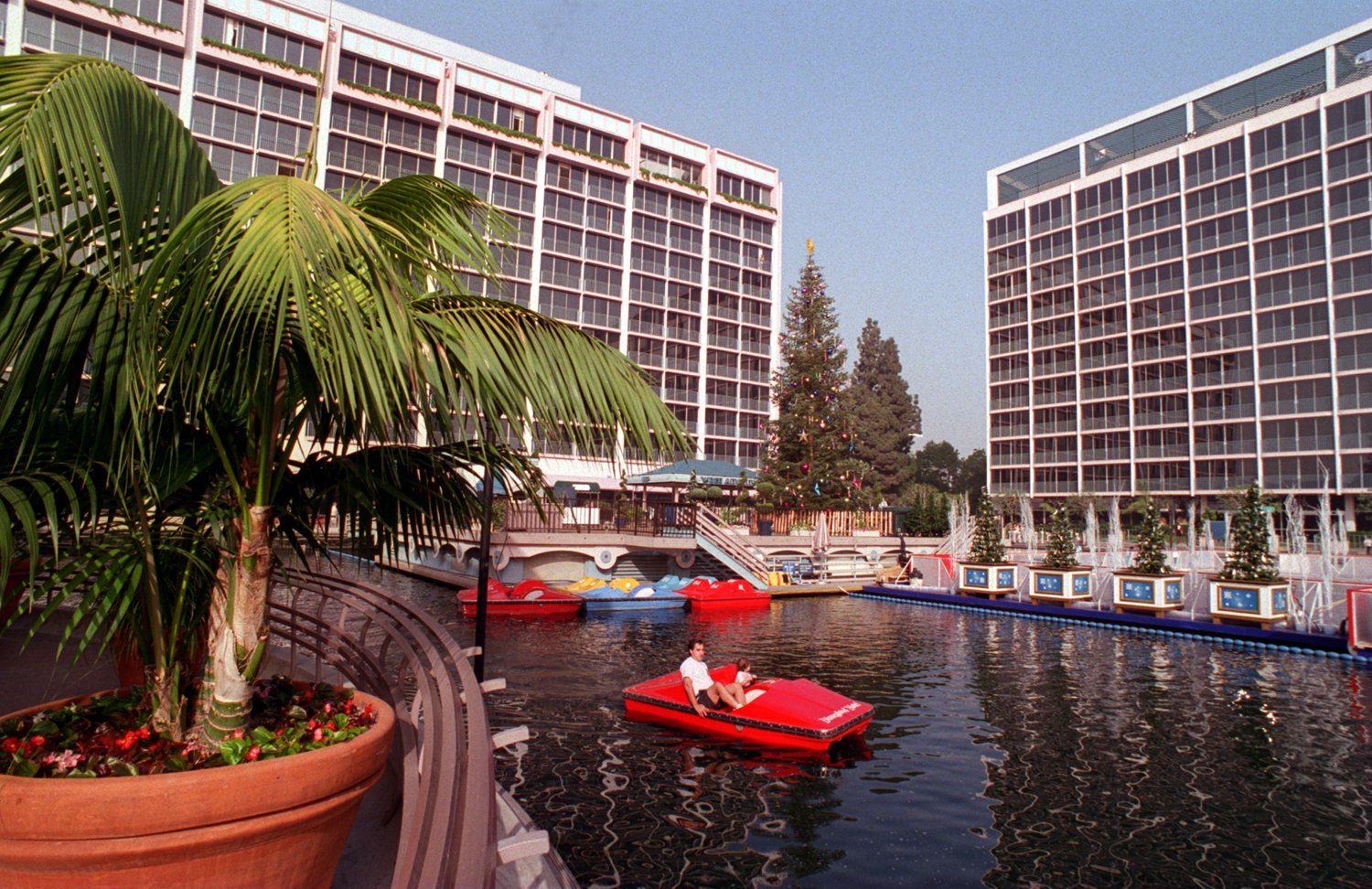 The Disneyland Hotel has been around since Disneyland’s very first year of operation in 1955. One of the things people staying at the hotel were permitted to do was rent a paddleboat from its small marina. The marina was also home to a display of yachts. The marina, along with its paddleboat offerings, closed in 1999 to make way for the hotel’s new main pool, the Neverland Pool, which was themed after Peter Pan. Ready to plan a trip to Disney, despite the pandemic? Here are 10 things you need to know about staying at a Disney-owned resort right now. 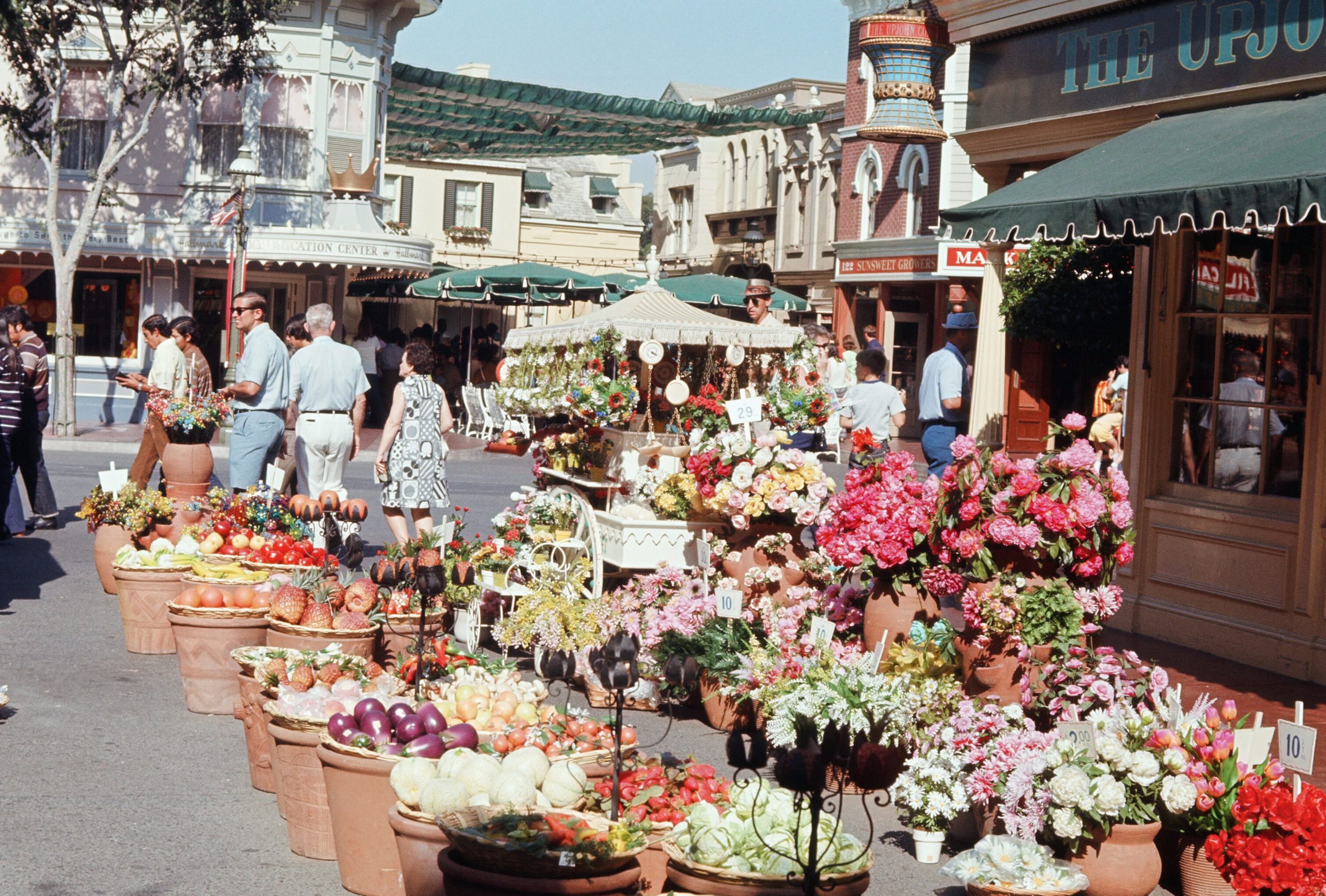 To make Main Street U.S.A. feel more like an actual neighborhood, Disney created a Flower Market that was open each day for people to buy fake flowers. It opened in 1957 on West Center Street, which divided Main Street U.S.A. in half. In 1977, the flower market moved across the street to East Center Street to make more room for outdoor dining at the Carnation Ice Cream Parlor. The flower market slowly faded, and West Center Street is now an outdoor patio for Carnation Cafe, while East Center Street provides outdoor dining for Starbucks. By the way, did you know you could get coffee from the Disney parks delivered to your house? 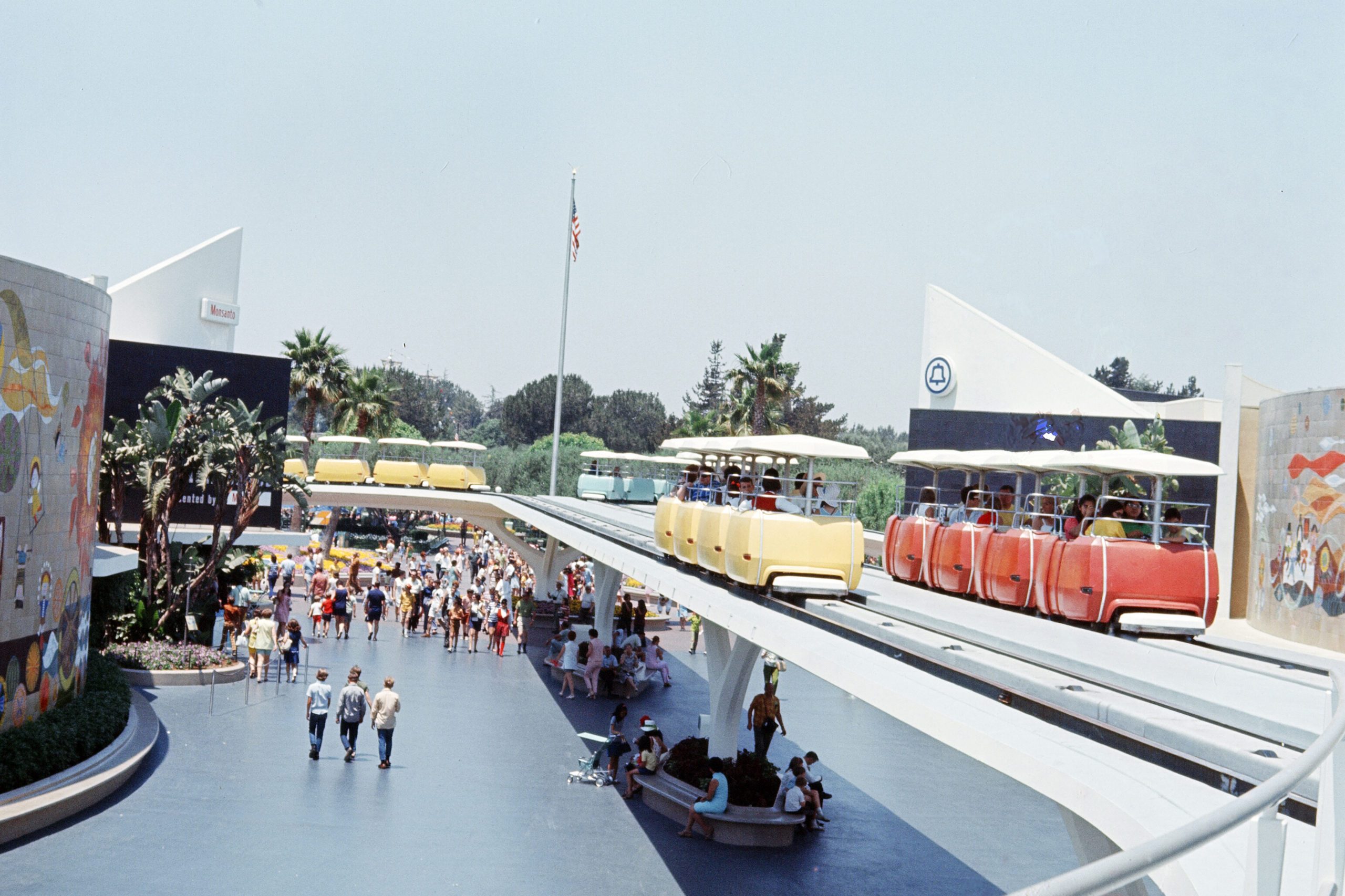 The Disneyland PeopleMover debuted in 1967 and was part of the revitalization of Tomorrowland. The slow-moving, open-air ride took visitors on a tour of Tomorrowland from high above the sidewalks of the park and even through a few attractions like Space Mountain and the Carousel of Progress. The PeopleMover closed in 1995, and the track was eventually used for a new attraction called Rocket Rods, which opened three years later. To see how much else has changed, check out these pictures of the Disney parks through the decades. 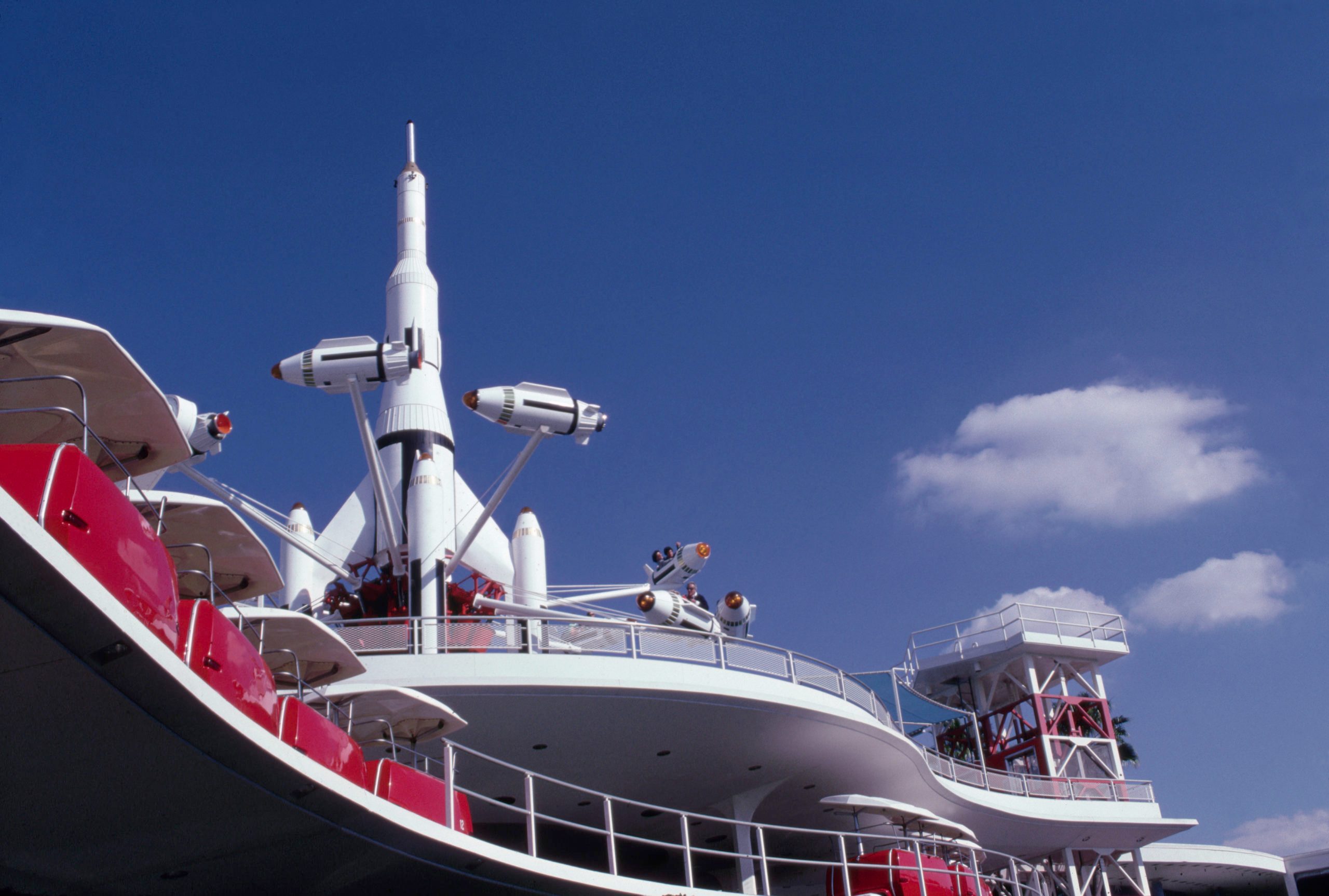 Here’s another Disneyland attraction that, depending on your age, you either completely missed or is now just a distant memory. This hub-and-spoke spinner attraction was located on the top level of Tomorrowland, above the PeopleMover. To get there, you’d take a short elevator ride, just like real astronauts would to get to their rockets. The ride allowed people to use a lever to push the rocket up or down as it spun around Tomorrowland. The Rocket Jets closed in 1997 and were replaced with a kinetic sculpture called the Observatron. 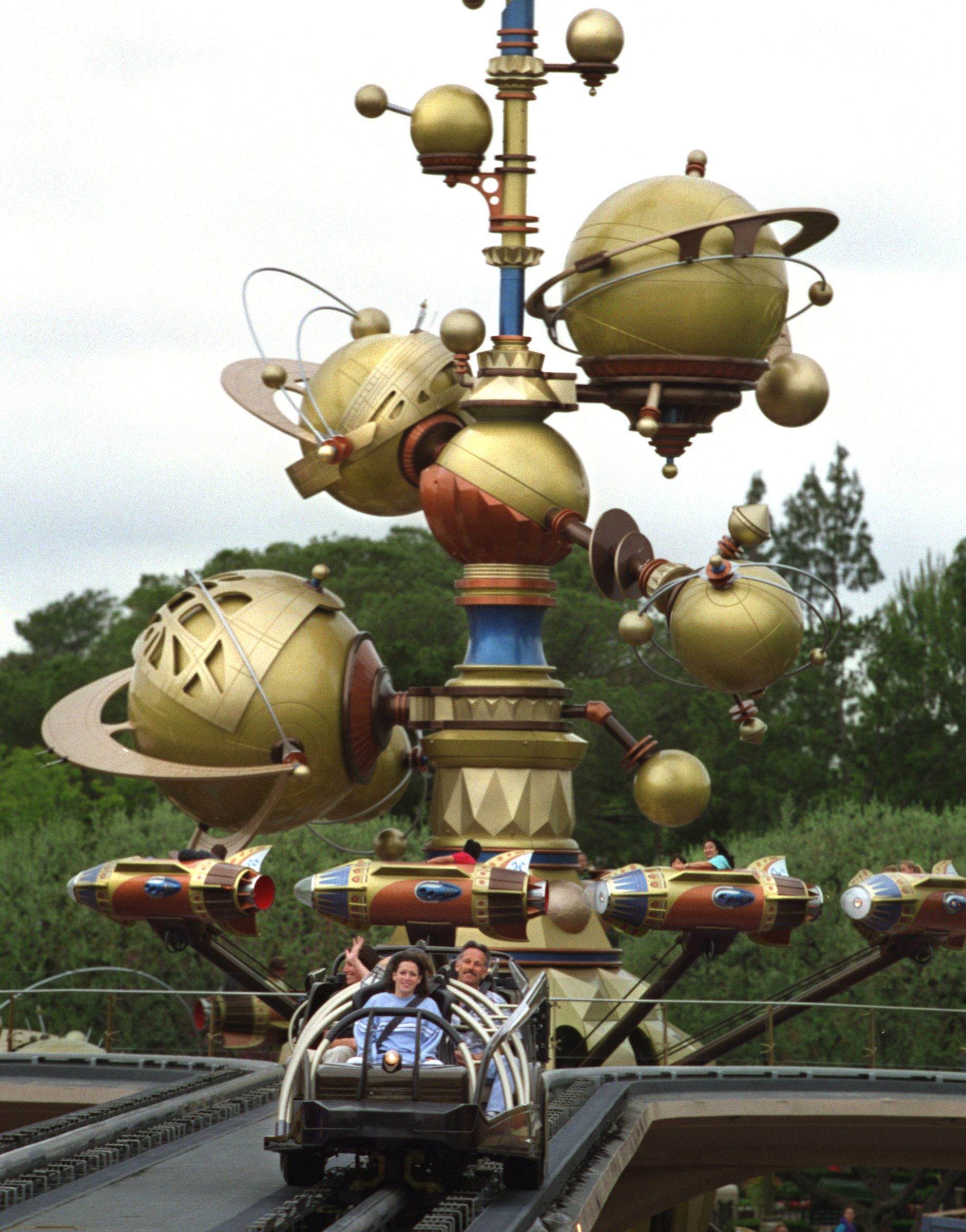 When the PeopleMover closed in 1995, the original track was repurposed for a high-speed thrill ride called Rocket Rods. It opened in 1998, but it didn’t last long. The ride wore out quickly since it would speed up to 30 miles per hour and slow down quickly around corners so many times per day around the old PeopleMover track. The ride closed in 2000 for its annual refurbishment, but it never reopened. In 2001, Disney announced it was officially closed for good. Nothing has been done with the track for Rocket Rods, but if you have a keen eye, you can still see the original track as you venture through Tomorrowland. For more park secrets, learn the 12 things only Disneyland insiders know. 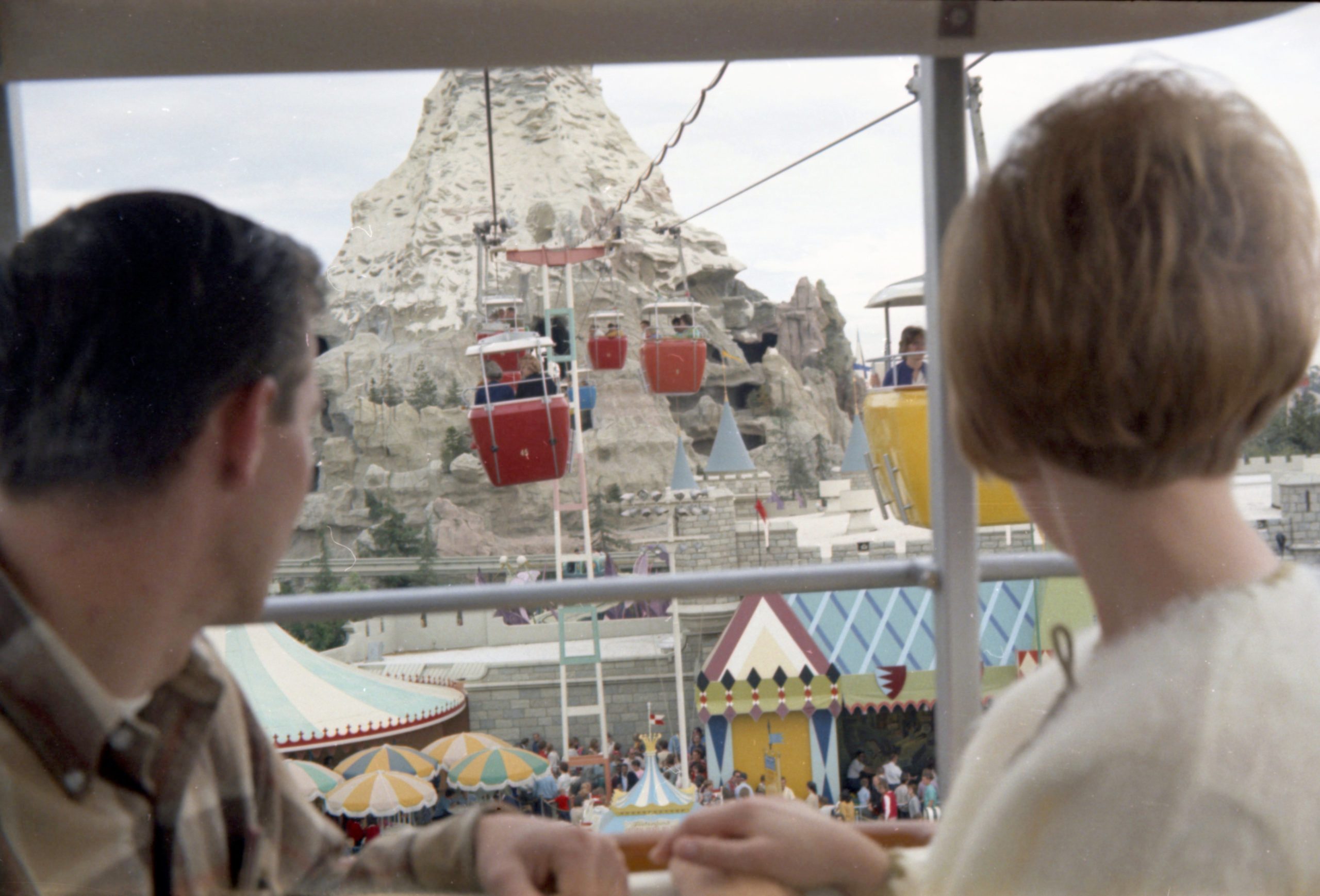 This gondola lift opened in 1956 as two separate attractions, the Skyway to Tomorrowland and the Skyway to Fantasyland. When the Matterhorn opened in 1959, the Skyway passed through the center of the mountain. The attraction was open for almost 40 years before it closed in 1994, though you could still see the station for years after that. You could even see it from the parking garage at Disneyland when Star Wars: Galaxy’s Edge was getting ready to be built, including the super immersive Star Wars: Rise of the Resistance. 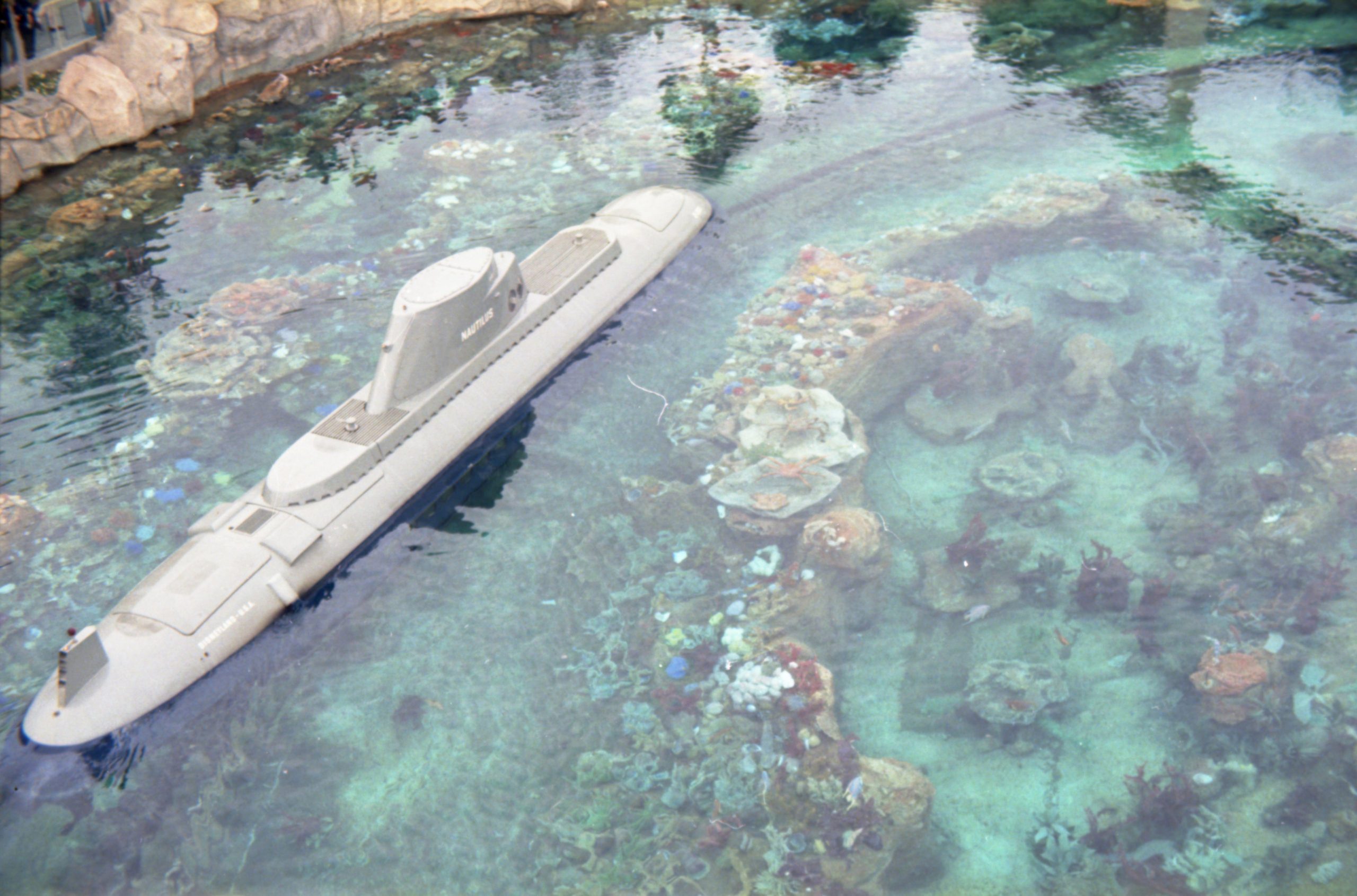 Submarine Voyage opened in 1959 and invited guests into a mock-up of a real submarine. Each person on the journey would get his or her own porthole through which to view the undersea life and mermaids. The ride in its original form lasted until 1998 when it closed. At the time, Disney announced that the ride would be closed for five years before something new would replace it. But 2003 came and went, and nothing new was built in its place. Then, in 2005, Disney announced that the Finding Nemo Submarine Voyage would open in 2007. That Pixar-themed attraction is still operating at Disneyland today, along with a version of Disney’s most popular ride. 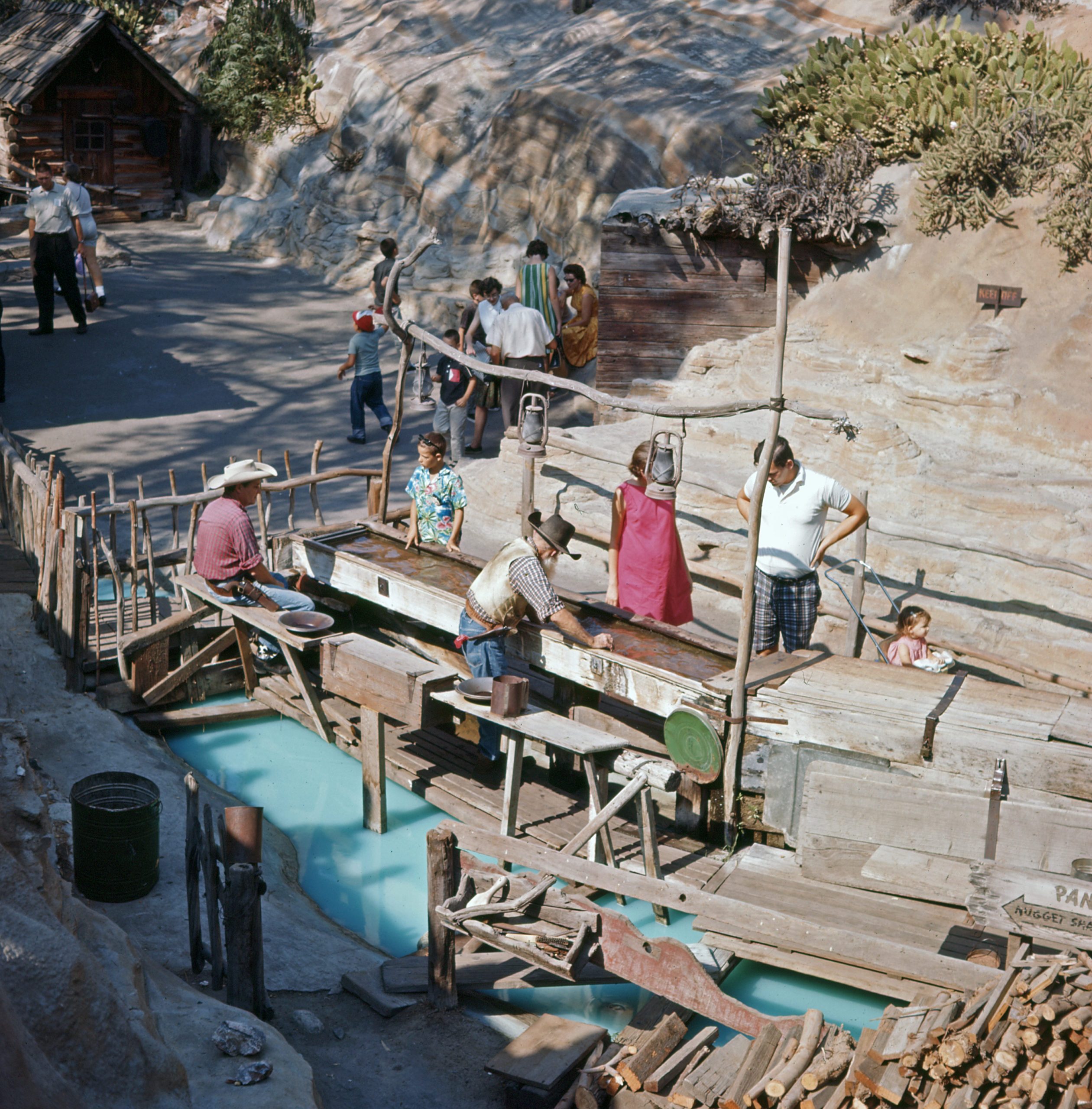 Frontierland at Disneyland has changed almost as much as Tomorrowland has. In the early ’60s, people visiting the park could experience what it was like to be in the age of the gold rush by panning for gold. The small stand was operated by two Disney cast members (Disney’s term for employees), and families would search for gold nuggets in the water and dirt. This experience was eventually stopped when Frontierland began a major overhaul and started construction on Big Thunder Mountain Railroad. While that roller coaster may be legendary, it seems tame compared to the longest, fastest, and tallest dive roller coaster in the world. 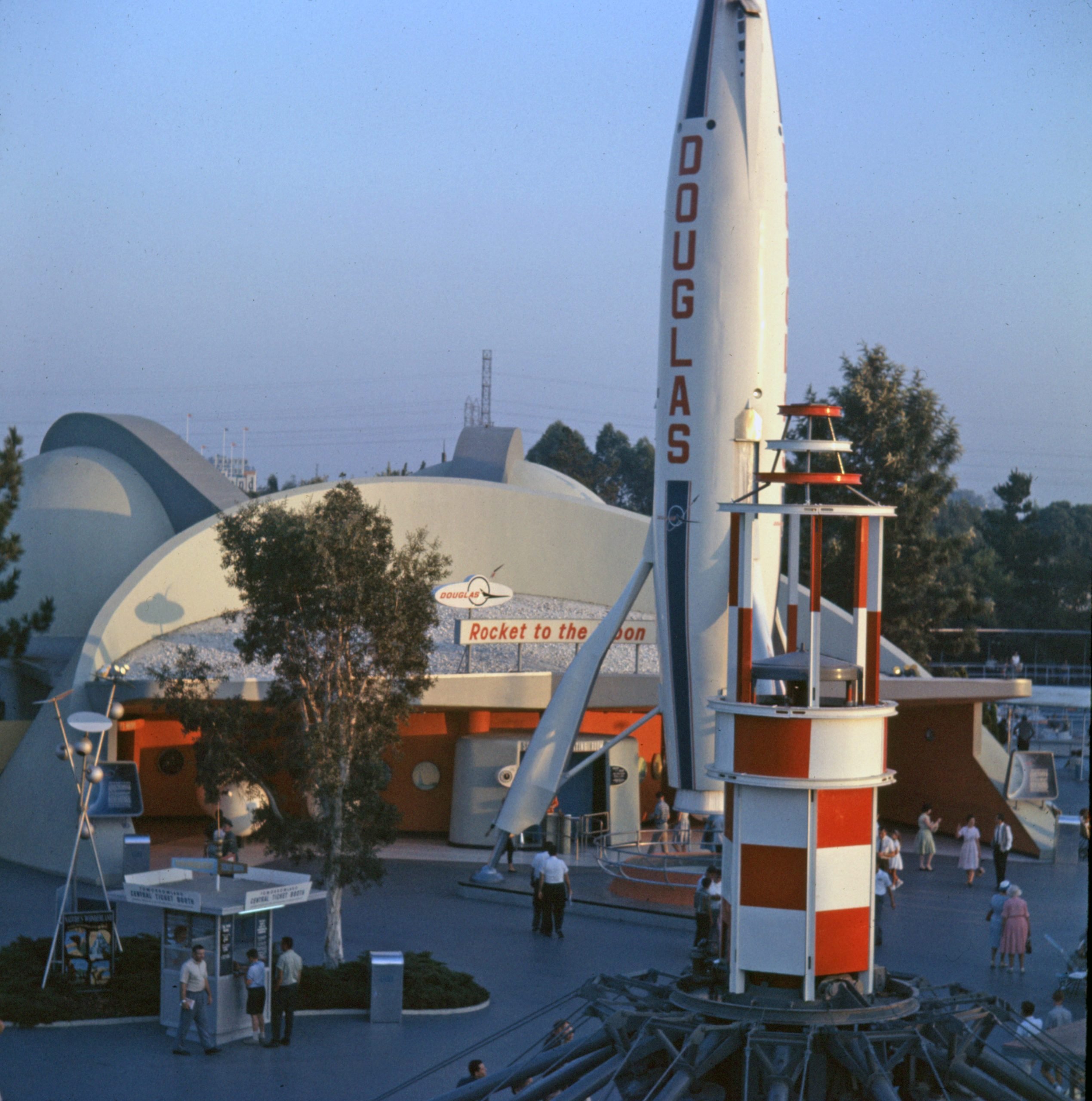 Rocket to the Moon

Rocket to the Moon opened at Disneyland in 1955, and its giant red and white Moonliner quickly became an icon for the Tomorrowland section of the park. The attraction was a simple motion simulator that took guests from the Earth to the moon in a domed theater. The coolest part about the theater was that the ground and the ceilings were actually screens that showed you where you were going and where you had been. Rocket to the Moon closed in 1966 to make way for a new attraction called Flight to the Moon, which opened in 1967. 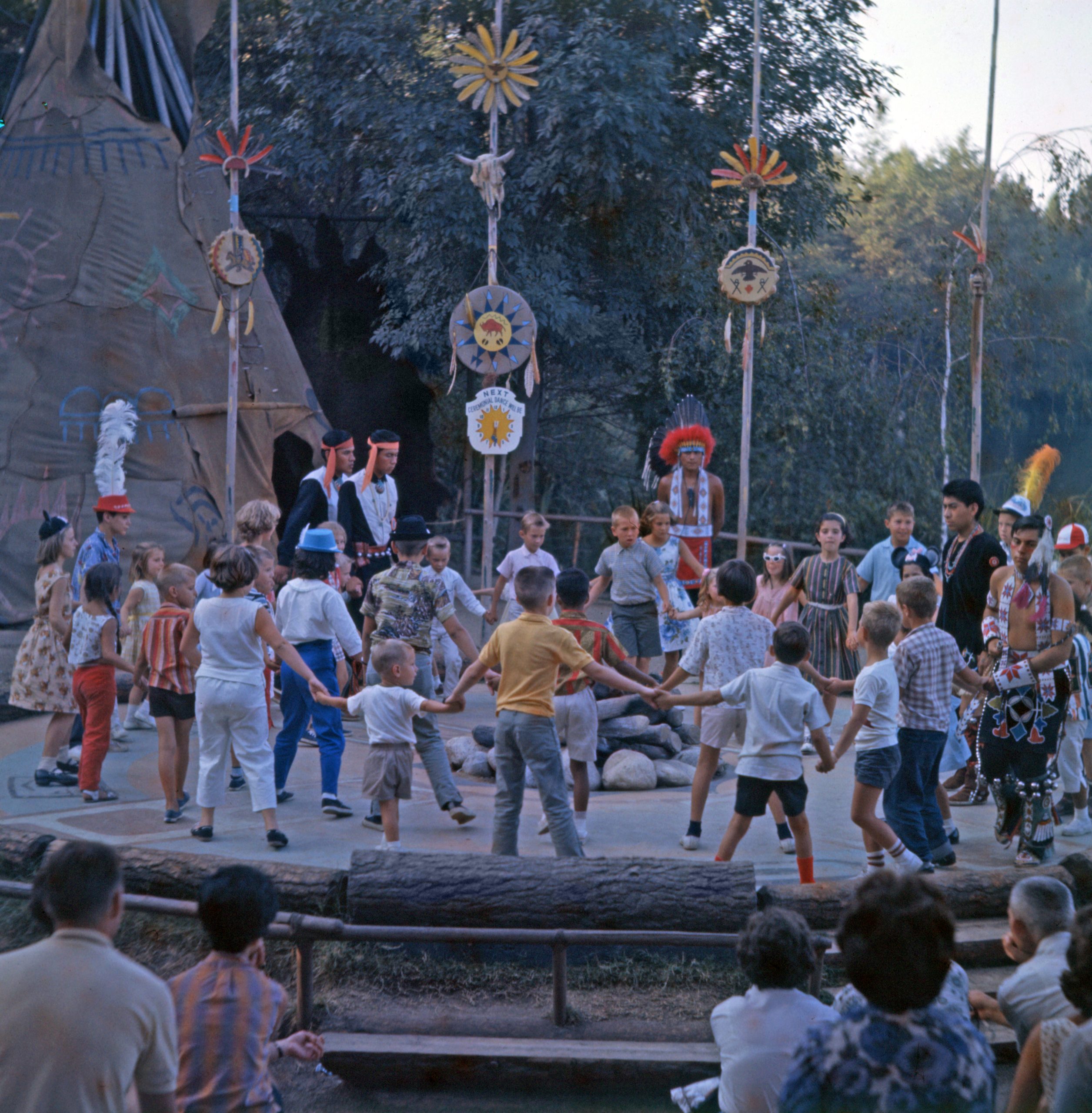 This Frontierland village, which opened in 1955, featured teepees that guests could look at but not enter, a weaving demonstration, and a ceremonial dance circle. The village employed Native American cast members to tell stories. In 1956, Indian Village moved to a new location that would be its home until 1971. It was replaced by a completely new land called Bear Country (now Critter Country), which featured the show Country Bear Jamboree and the soon-to-come Splash Mountain, which is now getting a much-needed makeover. 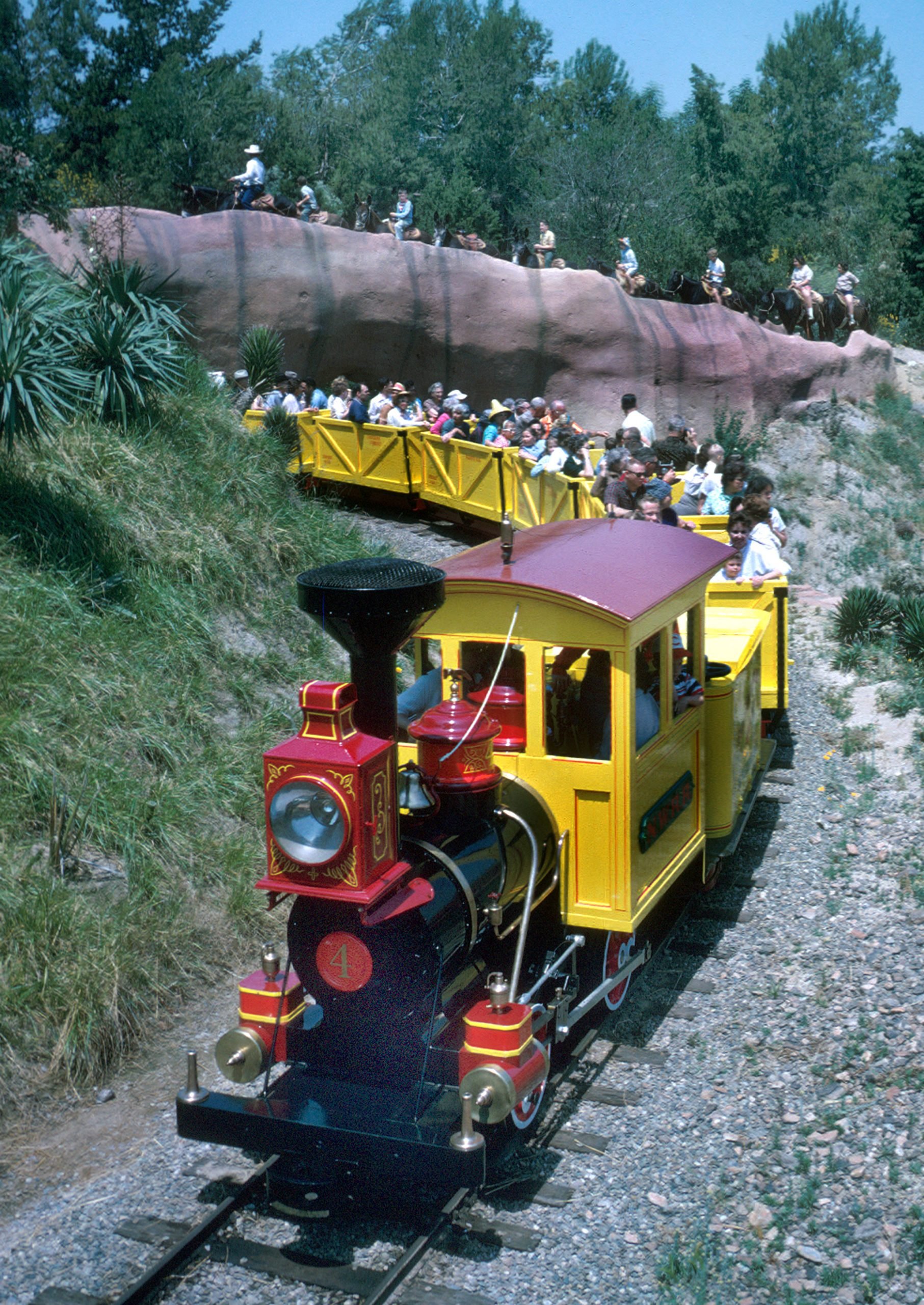 Mine Train Through Nature’s Wonderland

The simple train ride, which opened in 1960, took visitors through the Living Desert area of Frontierland and ended with a journey through the Rainbow Caverns. The caverns were full of rock formations, ponds, and waterfalls, all of which were lit to dazzle and sparkle in the dark caves. The ride closed in 1977 to make way for Big Thunder Mountain Railroad. 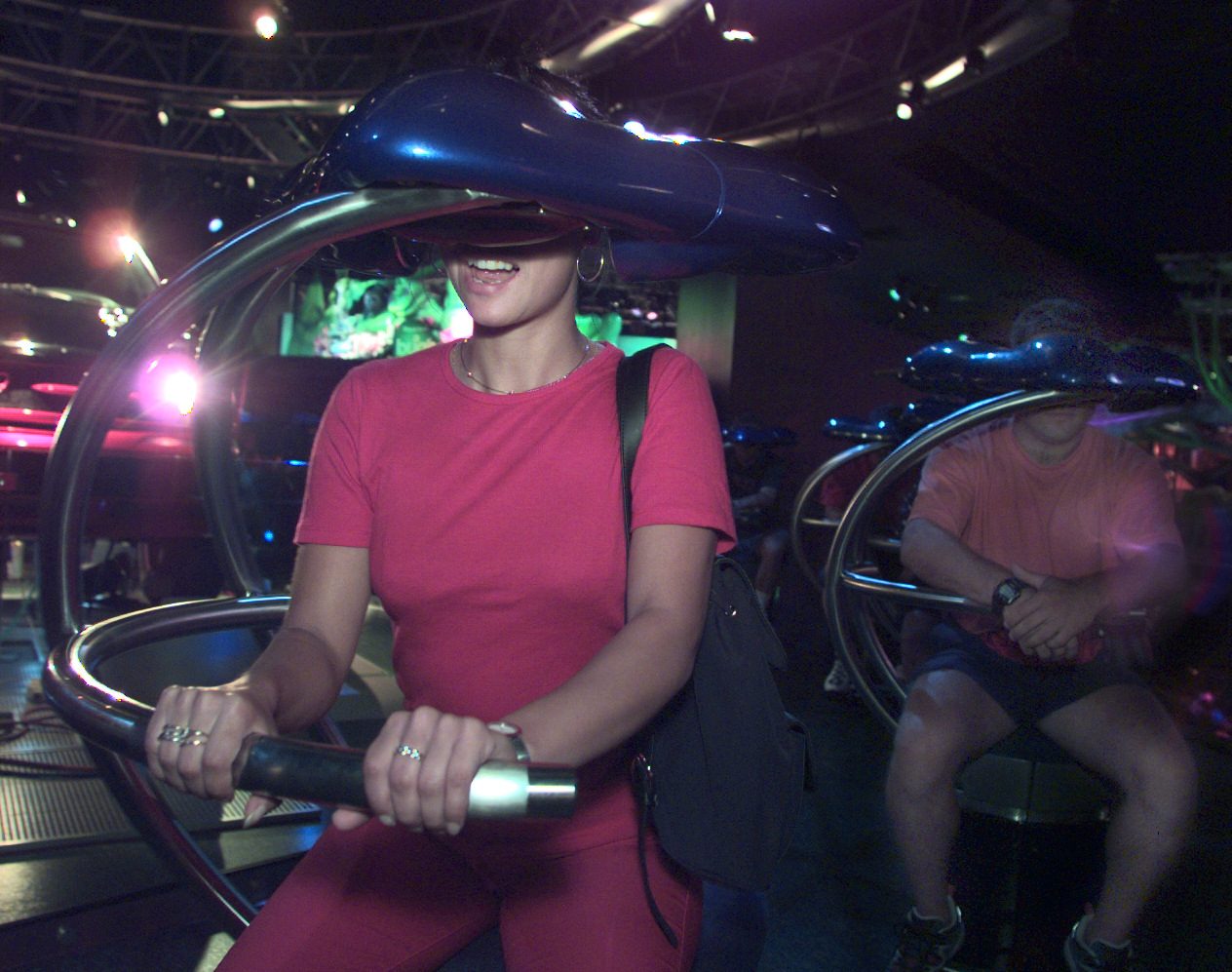 After America Sings closed at Disneyland in the late ’80s, a large chunk of space in Tomorrowland was left empty. Eventually, the Innoventions pavilion, inspired by the pavilion of the same name at Epcot, took over Tomorrowland. The space was intended to show guests what the future of technology would look like, and it included the GM Cyber Seats, which took you on a fully CGI virtual-reality ride. Innoventions and the GM Cyber Seats closed in 2015. The Star Wars Launch Bay now occupies the bottom floor of the building, while the top floor remains empty. Speaking of Epcot, you’re going to want to check out these 12 major changes coming to the park.