6 Simple Eating Habits of People Who Live to 100

Dan BuettnerUpdated: Jul. 07, 2017
From the book The Blue Zones Solution

Centenarians in the Blue Zones—locations around the globe known for longevity and good health—follow daily rituals around food and meals. Practicing these powerful food practices is one of the keys to longevity and happiness. 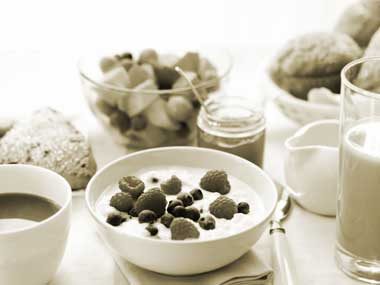 There’s an old saying: “Breakfast like a king; lunch like a prince; dinner like a pauper.” Make the first meal of your day your biggest, and only eat three meals a day. The routine is the same in almost all of the Blue Zones. Nicoyans often eat two breakfasts and a light dinner. Lunch tends to be the big meal for Ikarians and Sardinians. Okinawans like to skip dinner altogether. People may occasionally grab a mid-morning piece of fruit or a mid-afternoon handful of nuts, but most don’t make a habit of snacking. The average meal contains 650 calories, so with just three meals a day and a small snack, most people get all the calories a day they need.

Recent research supports front-loading calories. An Israeli study found that dieting women who ate half their daily calories at breakfast, about a third at lunch, and a seventh at dinner lost an average of 19 pounds in 12 weeks. They also saw drops in triglycerides, glucose, insulin, and hormones that trigger hunger. 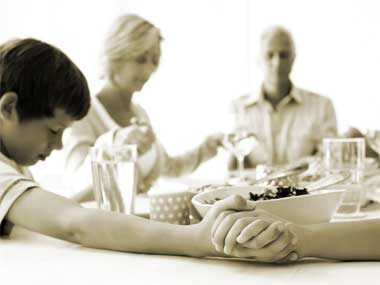 In translation: Plan before you start eating to stop eating when you’re 80 percent full. If you’re ever lucky enough to share a meal with older Okinawans, as I have, you’ll often see them murmuring this 2,500-year-old Confucian adage before they eat. Dietary expert Leslie Lytle has estimated that if the average American would follow the practice of hara hachi bu, he or she could lose 17 pounds in just the first year! Rituals like this and other forms of saying grace also provide a pause in everyday living, forcing people to slow down and pay attention to their food. Ikarians, Saridinians, Costa Ricans, and Adventists all begin meals by saying a prayer. 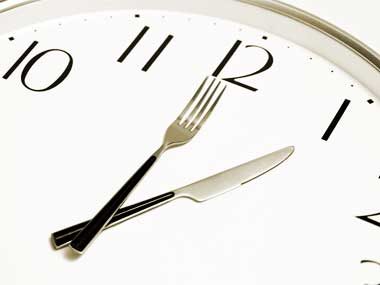 Fasting need not mean going for days without food and drink. You can experience the benefits of a small fast every 24 hours, by scheduling the time that you eat during only 8 hours of the day. It takes between 6 and 12 hours for our bodies to digest and absorb a meal. After this time, the body enters a fasting state, when it calls on reserves for energy—like stored fat—so establishing this schedule of eating 8 hours and fasting 16 can contribute to weight loss.

Recent scientific evidence shows that fasting, even for a day, can recalibrate insulin release, giving the pancreas a break. It can temporarily lower blood pressure and cholesterol. Moderate fasting for longer periods can create a form of calorie restriction and may slow aging. 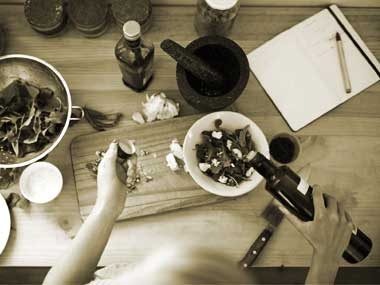 In most Blue Zones, eating out is a rare treat. When you cook at home, you can control the ingredients. And you’re likely to eat a narrower variety of foods in
a single meal. The more items you’re offered, the more food you tend to
consume. Cooking also requires you to stand, stir, mix, knead, chop, and lift. All of this physical activity counts, especially when compared to sitting down at a restaurant.

Consider 80-year-old Eleni Kohilas of Raches Christos on Ikaria. When I had the pleasure of watching her bake bread, I realized I might have been witnessing the true explanation for why Ikarian sourdough bread contributes to longevity. The process started the night before when Kohilas walked to her neighbor’s house to procure a marshmallow-size piece of sourdough. This exchange occasioned a half-hour conversation and a thorough download on the village gossip. After walking home, Kohilas mixed water, flour, and salt with the starter and kneaded the dough for about a half hour. The following day, she cut wood, stoked a fire in the outdoor oven, and tended the fire until it reached baking temperature. By lunchtime, she had six steaming loaves of healthy, delicious bread—and a two-hour workout under her belt. She’d burned enough calories making the bread to equal her first four pieces.

Not everyone is going to walk to a neighbor’s house or build a fire to make a loaf of bread. But even making a simple meal could shave 100 to 300 calories. 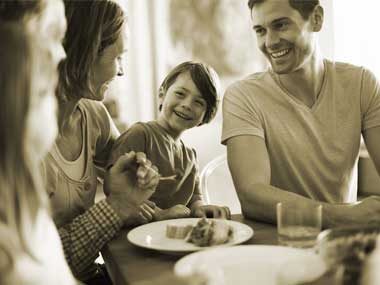 Eat With Friends and Family

I’ve eaten countless meals with people in the Blue Zones, and they were often three-hour affairs with a succession of many small plates punctuated by toasts, stories, jokes, and conversation. Mealtimes are celebrations, a time to give thanks, talk out problems, and bond as a family. As a rule, people in the Blue Zones never eat alone, never eat standing up, and never eat with one hand on the steering wheel.

How you eat can be as important as what you eat. If you eat on your feet or driving in the car, stress hormones can interfere with your digestion and degrade food metabolism, Eating fast promotes overeating, and, studies show, can double your risk of obesity. 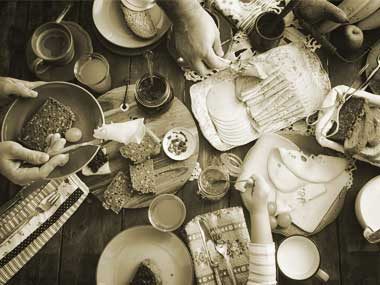 None of these rituals should feel like a restriction. Don’t deprive yourself. We eat about 1,100 meals a year. If we celebrate a couple of times a week and enjoy what we love to eat, that still leaves almost 1,000 meals a year to eat the Blue Zones way. “What dieters forget is that eating is one of the greatest pleasures of living,” said Antonia Trichopoulou, arguably the greatest living expert on the Mediterranean diet. “Why would you want to miss any of this?” she asked, gesturing to the food on the table before us. 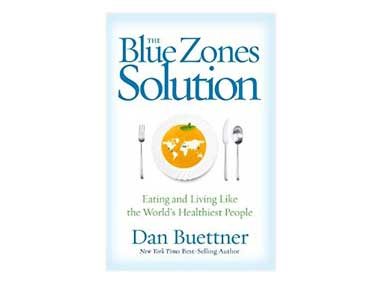 In his latest book, The Blue Zones Solution, best-selling author and National Geographic fellow Dan Buettner reveals how ordinary Americans can adapt the healthy-living habits of those in such longevity hot spots as Ikaria, Greece or Okinawa, Japan. In various cities across America, Buettner’s teams have helped thousands of people lose weight, reverse disease, and increase life satisfaction. Learn more and buy the book here.