14 Crazy Facts About Earth You Never Learned in School

The planet is almost 25,000 miles around and 4.54 billion years old, and humans are still discovering some of the amazing secrets it's hiding. 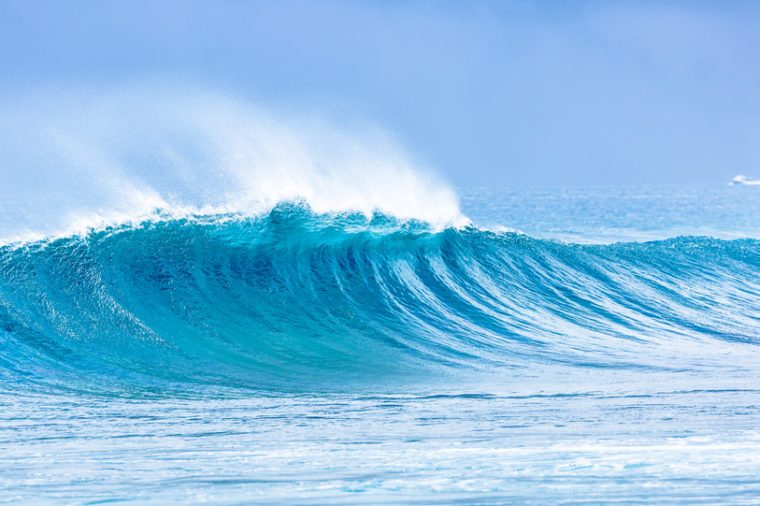 Stories about giant waves have been circulating among sailors for centuries, but skeptical scientists thought they were about as common as mermaids. Then, in 1995, an oil platform in the North Sea was hit by a big one during a huge storm, and it had the equipment on hand to determine that the wave had been a massive 84 feet tall. A few years later, a 95-foot wave was measured by a research vessel west of Scotland. Oceanographers realized that not only were these massive waves real, but they were also surprisingly common. According to the U.S. National Oceanic and Atmospheric Administration, rogue waves are more than twice the size of surrounding waves (often getting as big as 100 feet tall), come from surprising directions, and only happen in open seas. If you think these facts about Earth are surprising, wait until you read about the strangest mysteries about planet Earth. 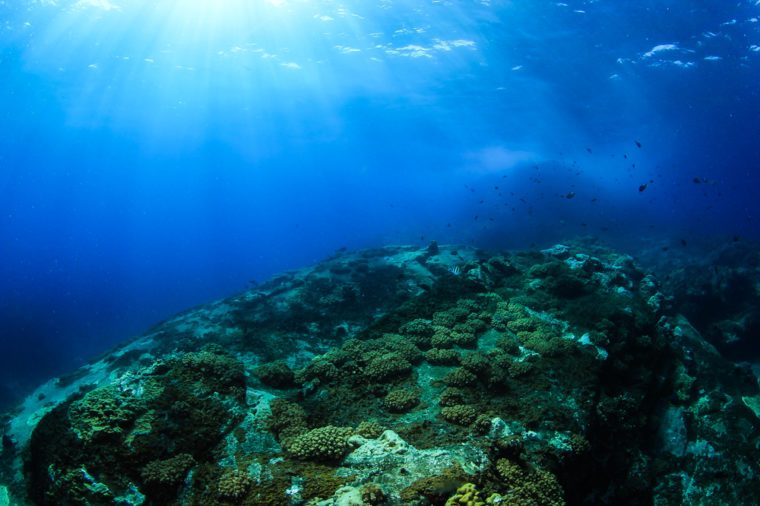 Rogue waves aren’t the only giant secret the oceans have been keeping—the longest mountain range in the world is actually underwater. It’s called the Mid-Ocean Ridge, and it extends more than 40,000 miles, running down the middle of the Atlantic, east through the Indian Ocean, and back up through the Pacific, along the west coast of the Americas. (Compare that with the Andes, the longest continental mountain range, which is only 4,350 miles long!) The Mid-Ocean Ridge is a continuous string of underwater volcanoes lying along the meeting points of Earth’s tectonic plate—as the plates drift apart, magma seeps up continuously, creating new crust. Here are some other ocean mysteries science still can’t explain.

Mount Everest in the Himalayas usually takes this honor, at more than 29,000 feet above sea level; but if we include mountains that aren’t fully above sea level, Hawaii’s Mauna Kea is the winner. Only 13,706 feet of it come up above the water, but if you calculate its height starting from its base at the bottom of the Pacific Ocean, Mauna Kea is 30,610 feet tall, beating Everest by about 1,640 feet. Where Everest was formed by the collision of two tectonic plates (and is still growing taller), Mauna Kea developed because of the volcanic activity that formed the Hawaiian Islands—it’s dormant now, according to the Hawaii Center for Volcanology. Find out the 13 active volcanoes you can actually visit. 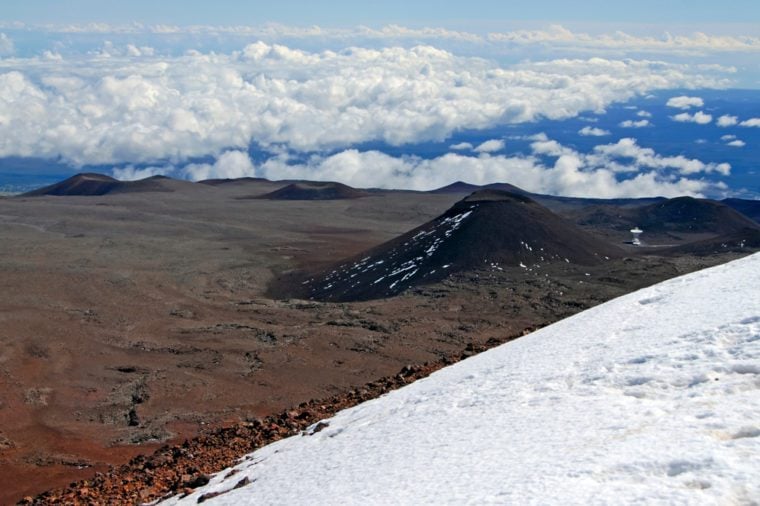 Nine out of ten of the world’s earthquakes and 75 percent of its volcanoes occur as a result of tectonic activity in what’s known as the Pacific Ring of Fire—a circle of volcanically and seismically active hot spots marking the meeting points of several plates that all encircle the large Pacific Plate. The tectonic plates are bumping into and sliding past, over, and under one another, resulting in eruptions and quakes. The circle is about 25,000 miles in circumference and is the cause of recent eruptions in Indonesia and the Philippines, as well as earthquakes in Mexico, Taiwan, and Alaska. Find out the volcanoes that could erupt next. 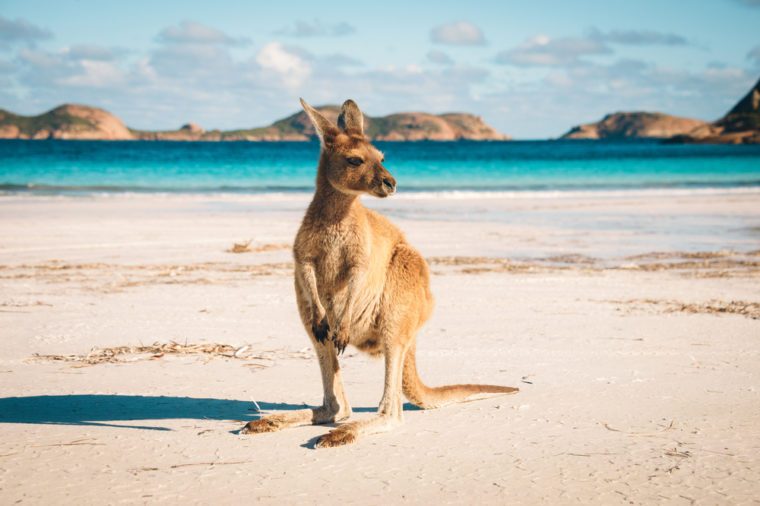 It’s one of the facts about Earth that all of its tectonic plates are shifting, but Australia’s is moving so quickly that it requires updates to maps and GPS systems fairly regularly—it moved almost 5 feet between 1994 and 2016, according to National Geographic. Geologist Christopher Scotese at Northwestern University told BBC that in about 50 million years, Australia will be colliding with southeast Asia. In about 250 million years, the continents might all merge into a single super-continent again, like Pangaea. 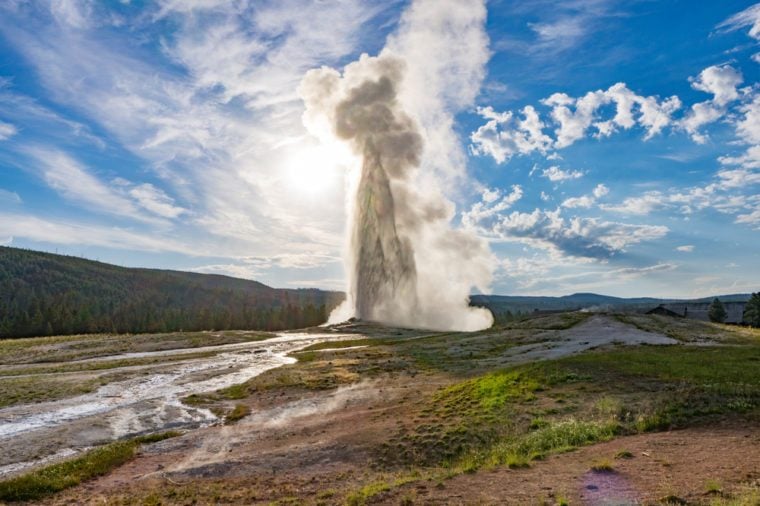 Volcanic islands are pretty easy to identify, but some of the ways volcanic activity shaped the earth in its infancy are not as easy to spot. One of the facts about Earth you might not know is that it was only in the 1960s that geologists realized the 44-mile-wide depression in the ground in Yellowstone National Park is a volcanic caldera. Rather than a lava flow that formed a mountain, like Hawaii’s Mauna Kea and Washington state’s Mount St. Helens, eruptions at Yellowstone took the form of massive explosions that actually caused mountains and other topography to collapse. The volcano is still active, in fact—there’s a chamber of liquid magma underneath it that fuels the park’s geysers and hot springs like Old Faithful. But the last major eruption was about 630,000 years ago, and although there’s not currently any good way to predict volcanic eruptions, scientists aren’t too worried about another big one. In fact, Ilya Bindeman, a University of Oregon geochemist, told the Washington Post that Yellowstone may be “approaching the end of its evolution.” 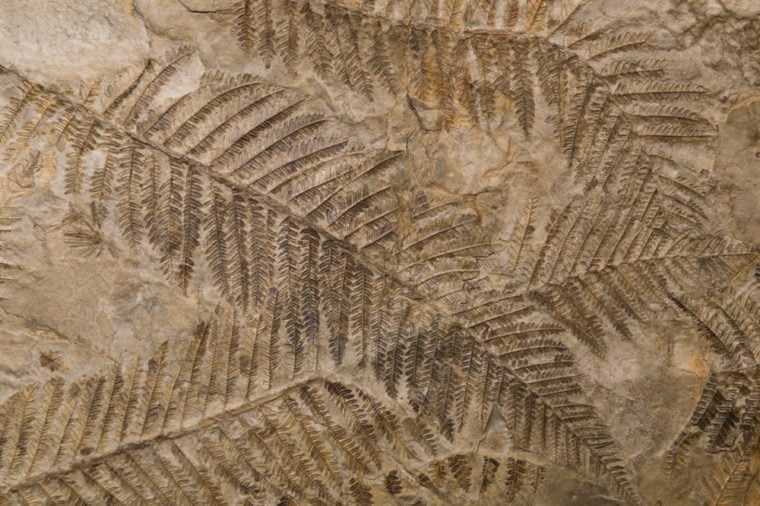 About 300 million years ago—long before the Yellowstone volcano formed—an eruption in what is now China left a thick layer of ash on top of a swamp forest. The Permian-era plants and trees were all fossilized and preserved. The continents were, at the time, still all joined together as a single land mass; over the intervening millennia, they’ve drifted apart into their current positions and the vegetation and animal life on Earth have changed immeasurably. That’s why when scientists discovered the fossilized forest a few years ago, they called it a Permian Pompeii—they can see just how the plants were arranged, and have found trees as big as 80 feet tall. (There weren’t any conifers or flowering plants, though—all plants reproduced through spores, like ferns, which were abundant.) “It’s marvelously preserved,” University of Pennsylvania paleobotanist Hermann Pfefferkorn told Gizmodo’s Jesus Diaz. “We can stand there and find a branch with the leaves attached, and then we find the next branch and the next branch and the next branch.” If you’re enjoying these facts about Earth, find out the 14 scary prehistoric animals you’ll be glad are extinct. 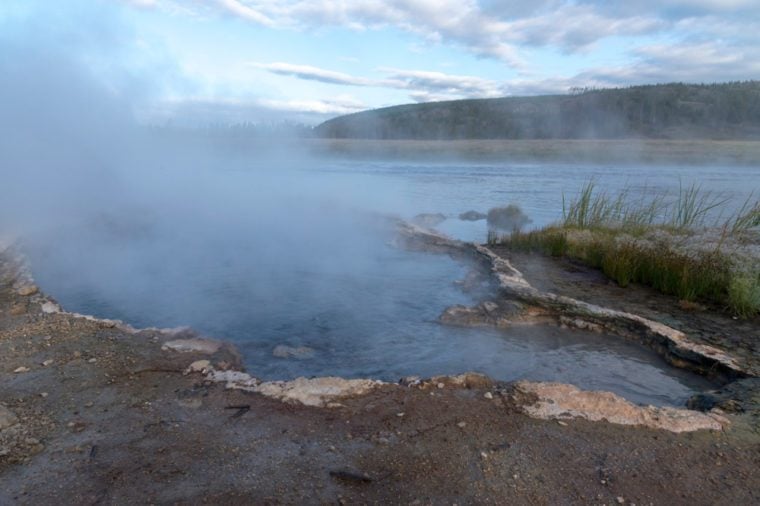 There’s a river in the Peruvian Amazon where water temperatures can actually cook unlucky animals that fall into the water. Geophysicist Andrés Ruzo, whose Peruvian grandfather mentioned the boiling river to him when he was a child, kept searching for the mysterious site even though his professors told him it had to be a myth. When he found it, he worried that it had been caused by nearby oil and gas extraction, but determined that it was a natural feature: It’s “a non-volcanic, geothermal feature flowing at anomalously high rates,” he told National Geographic. Meaning it’s just very hot water (getting up to about 200 degrees Fahrenheit) coming from very deep below the earth’s surface quickly enough that it doesn’t cool off before it comes out into the river. Discover other natural wonders around the world you’ve never heard of. 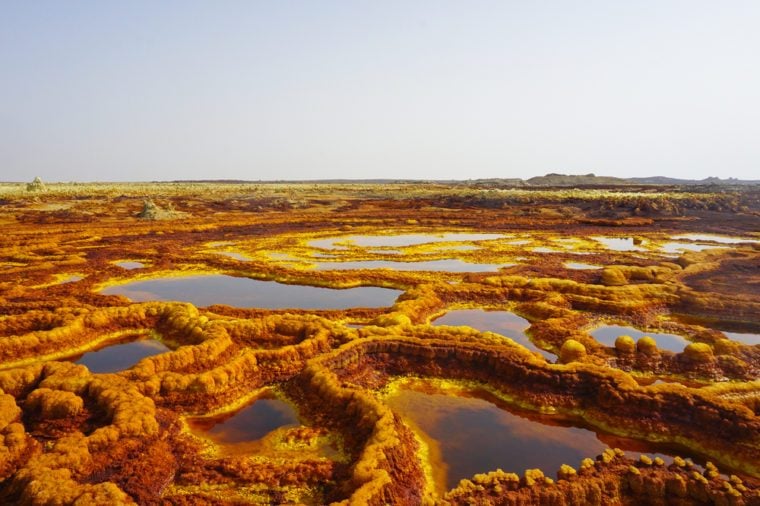 At a site in Ethiopia where three tectonic plates meet up, there are less than 8 inches of rain every year, and the average daily temperature is 94 degrees Fahrenheit, the landscape looks like an amazing sight from another planet. The Danakil Depression is part of the East African Rift Valley which, like the Mid-Ocean Ridge underwater, is a spot where tectonic plates are separating, allowing magma to seep up toward the earth’s surface. Volcanic activity causes bubbling lava lakes, hot springs, and tiny geysers. Heated groundwater brings dissolved mineral salts to the surface, and when the water evaporates, multi-colored fields of deposits are left behind. These 11 real places look like optical illusions. 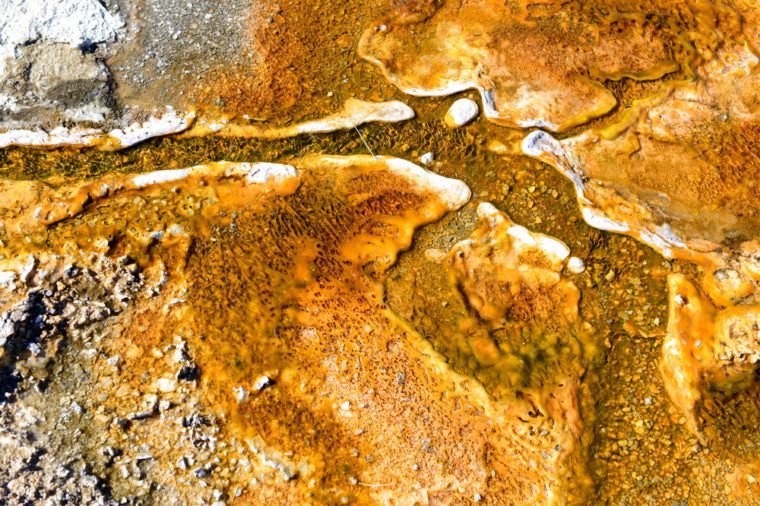 One of the most surprising facts about Earth scientists have found at the Danakil Depression—and in other areas with very hot hydrothermal vents, where chemical-rich fluid escapes to the Earth’s surface—is that specialized organisms call them home. When this happens deep under the ocean, especially, where sunlight can’t penetrate to allow photosynthesis, microbes use chemosynthetic processes to create organic matter out of hydrogen sulfide, methane, and other chemicals. Tubeworms and other animals that live near the vents often host these microbes on or in their bodies. 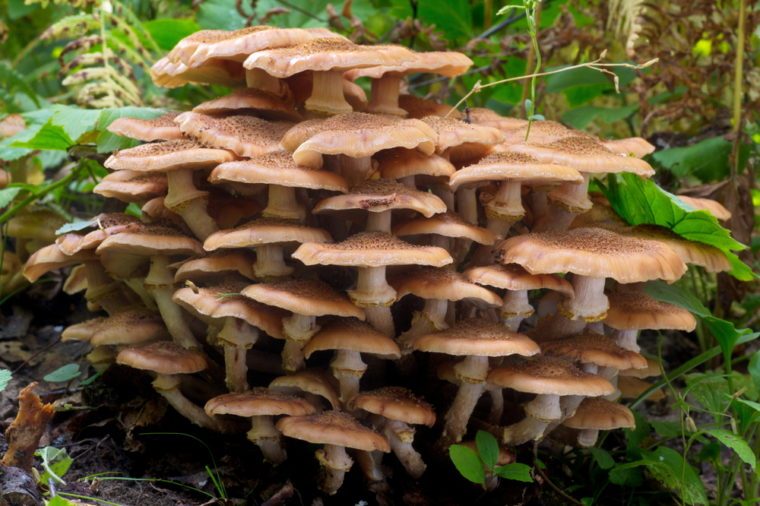 Scientists have been surprised by other forms of life over the past few decades as well—particularly the Armillaria fungus, a mushroom that’s proved to be a gigantic wonder. A scientist in Michigan found one in the early 1990s that turned out to weigh about 22,000 pounds and extend out 37 acres; when scientists started hunting competitively for more giant Armillaria, an Oregon sample was found that covered more than 2,400 acres. Researchers estimate its age at 8,650 years old. This particular fungus gets so big (and evades notice so effectively) because it grows root-like structures called rhizomorphs that extend underground for miles. It grows up into trees from below, and as a result, can kill large swaths of forest, biologist László Nagy, of the Hungarian Academy of Sciences, told The Atlantic. “You can basically see entire hills wiped out,” he said. Discover the strangest animal found in every state. 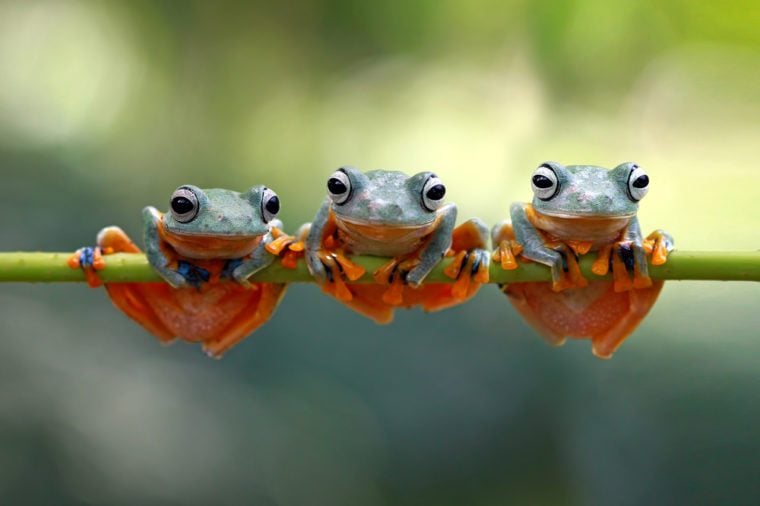 Another example of life showing up where you least expect it is when living creatures fall from the sky in a storm—and yes, this really happens. “Frog and toad rains, fish rains, and colored rains—most often red, yellow or black—are among the most common accounts of strange rain, reported since ancient times,” Cynthia Barnett writes in her book, Rain: A Natural and Cultural History. Scientists believe that a waterspout or tornado picks up the animals, dust, or other items in one place, and they get blown by the storm to another location where they fall. John Knox, an atmospheric scientist at the University of Georgia, told Smithsonian Magazine that he’s seen photographs that fell back to Earth 200 miles from where they were picked up by tornadoes. Check out these other bizarre things that have fallen out of the sky. 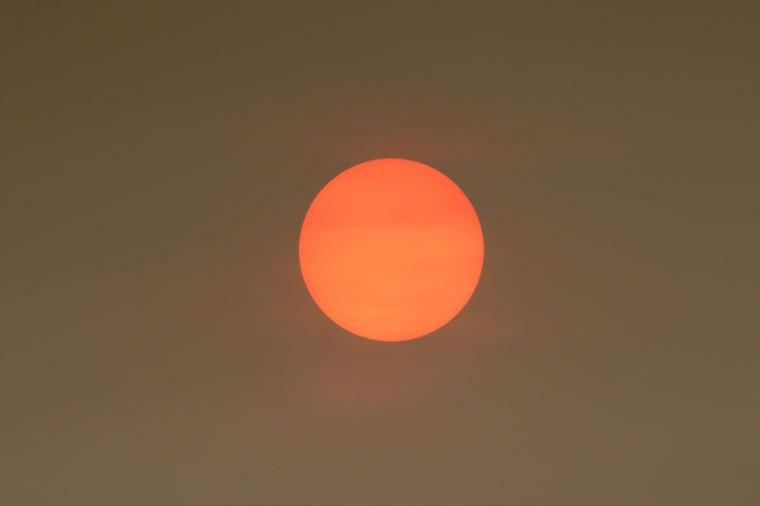 Dust can travel in the atmosphere even farther than photographs or frogs, and besides causing odd-colored rain, can also make the sky look hazy and cause asthma attacks in vulnerable people. According to NASA’s Earth Observatory, hundreds of millions of tons of desert dust blow across the Atlantic Ocean from Africa every year, adding to Caribbean beach sand and fertilizing the Amazonian soil. The dust might also disrupt hurricane formation by suppressing cloud formation. 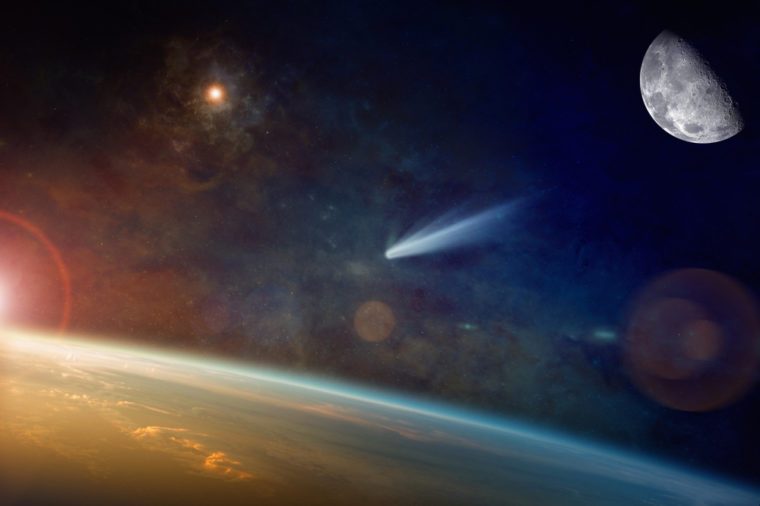 One of the most interesting facts about Earth is that dust isn’t just coming from deserts on Earth either—scientists recently collected samples of dust in the upper atmosphere that traveled here with comets. By studying the chemical composition of the particles, they can tell that the dust is actually older than the solar system. “Our observations suggest that these exotic grains represent surviving pre-solar interstellar dust that formed the very building blocks of planets and stars,” lead researcher Hope Ishii, from the University of Hawaii at Manoa, said in a statement. “If we have at our fingertips the starting materials of planet formation from 4.6 billion years ago, that is thrilling and makes possible a deeper understanding of the processes that formed and have since altered them.” Next, read on for the most baffling mysteries of the universe.