These celebrities prove family comes in many different forms.

Did you know there are reportedly 400,000 kids in the United States foster care system? That’s a staggering number of children in need of a safe, secure, and loving home. May marks Foster Care Month which aims to shine a spotlight on a system in need of more caring adults and families willing to open their hearts and homes to these children. Marilyn Monroe, Tiffany Haddish, and Greg Louganis are just three examples of celebrities who found themselves in foster care as children, but there are also many famous people who have fostered kids (some adopting through foster care), proving that family isn’t about a biological connection, but emotion, compassion, and love. Find out the secrets that all happy families know. 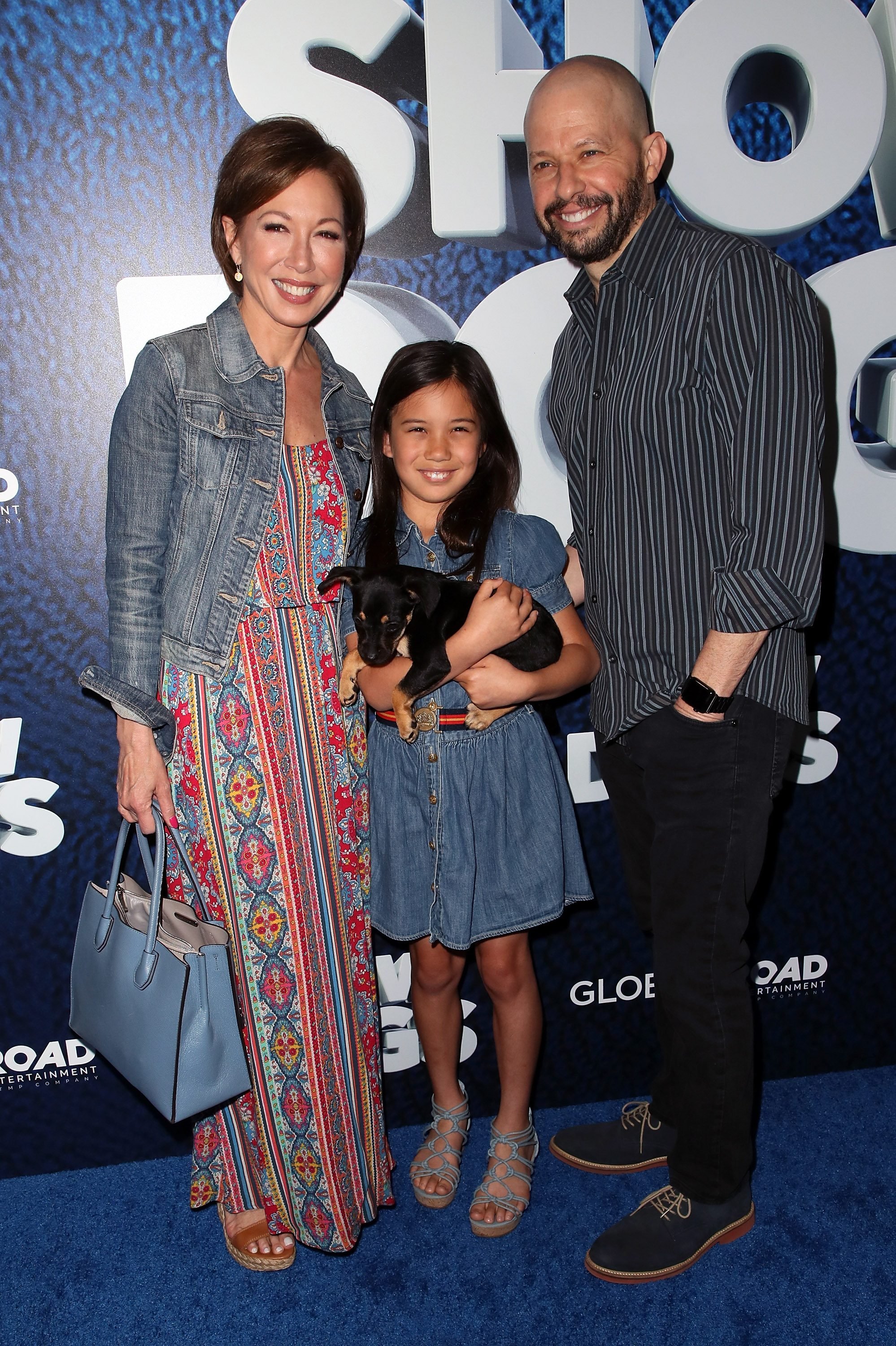 The Two and a Half Men star and his wife Lisa Joyner are proud parents to a daughter named Daisy, whom they adopted shortly after she was born. They are such advocates of adoption that they starred in a campaign for the organization, Raise a Child. “Really good friends have said to me, ‘I don’t know, though. I don’t know what I’m going to get,'” says Joyner. “You kind of don’t know what you’re going to get if you have a biological child. It was a no brainer for me. Adoption is a choice. And it’s a beautiful choice. Family is where you find it.” Joyner, herself, was in foster care and adopted. She knew she would one day want to adopt. “Families are what they are. You can defy convention,” says Cryer, who also has a son named Charlie from a previous marriage. Here’s how to help children in foster care.

Olympic gold medalist Simone Biles proves that incredible parents can help a child achieve anything, whether they’re related by blood or not. The gymnast was in the foster care system and eventually adopted by her grandfather and his wife. “My birth mother suffered from drug addiction, and when I was just three years old, my siblings and I were removed from her custody,” Biles told CNN. “From there, we bounced around until I was six and my grandparents made the brave move to adopt us.” The 23-year-old encourages greater investment in foster care children so that they can have greater opportunities to thrive. 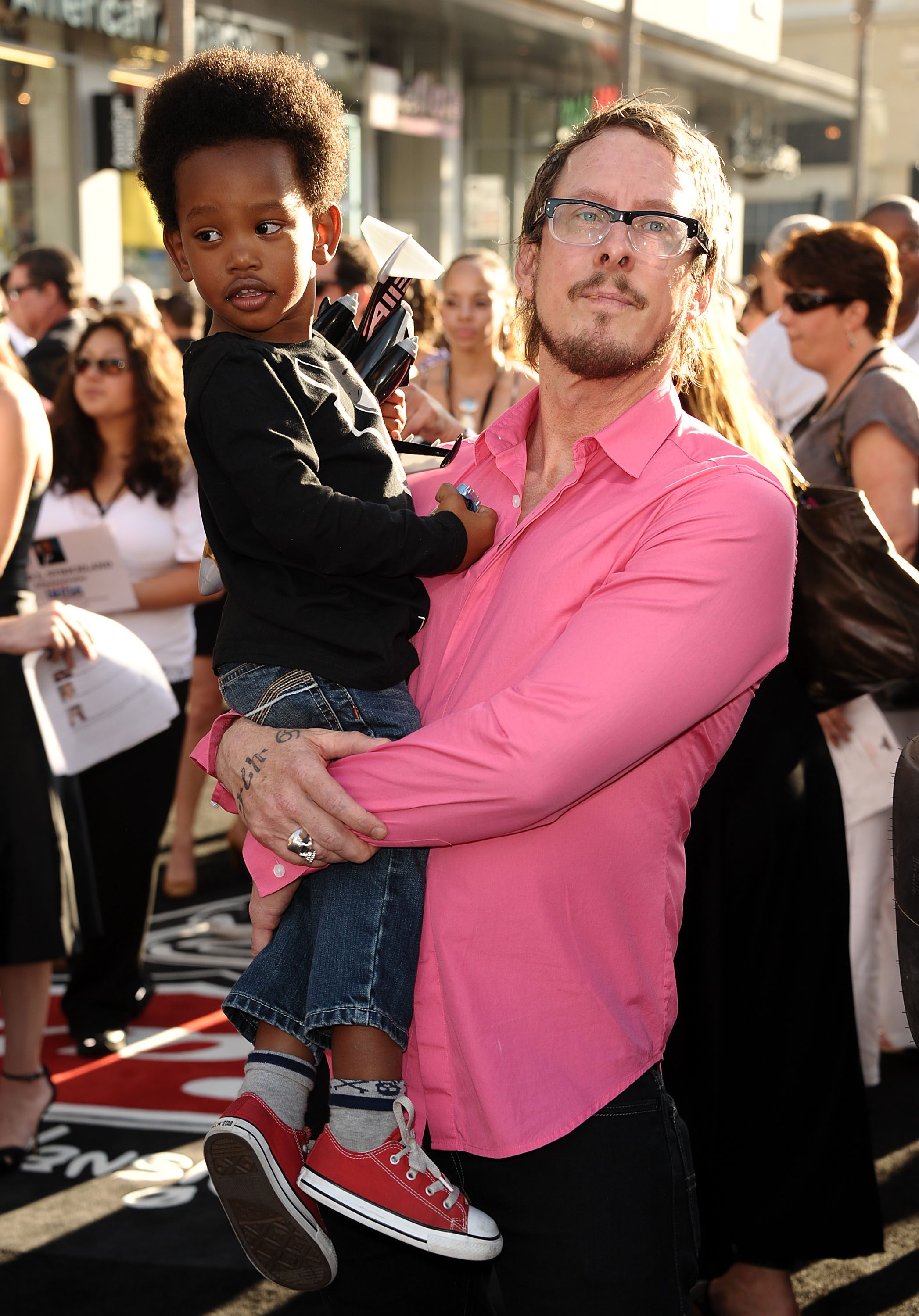 Scott Shriner of the band Weezer and his wife Jillian are parents to two adopted sons, the younger of whom (Jovi) they were connected with through the child-and-family services agency Five Acres after learning about how the difficulties of the foster care system in their hometown of Los Angeles faced. “The first time we met Jovi, it was a bit overwhelming. I just saw this little guy and he was so grown up and so small at the same time,” Shriner told OutlookNewspapers.com. “We just fell in love with him. I just had that instinct that was my son. I feel like our family was out there and it’s not your typical way of making a family, maybe, but you couldn’t make up a better one—we were all so meant to be together. It’s just undeniable.” 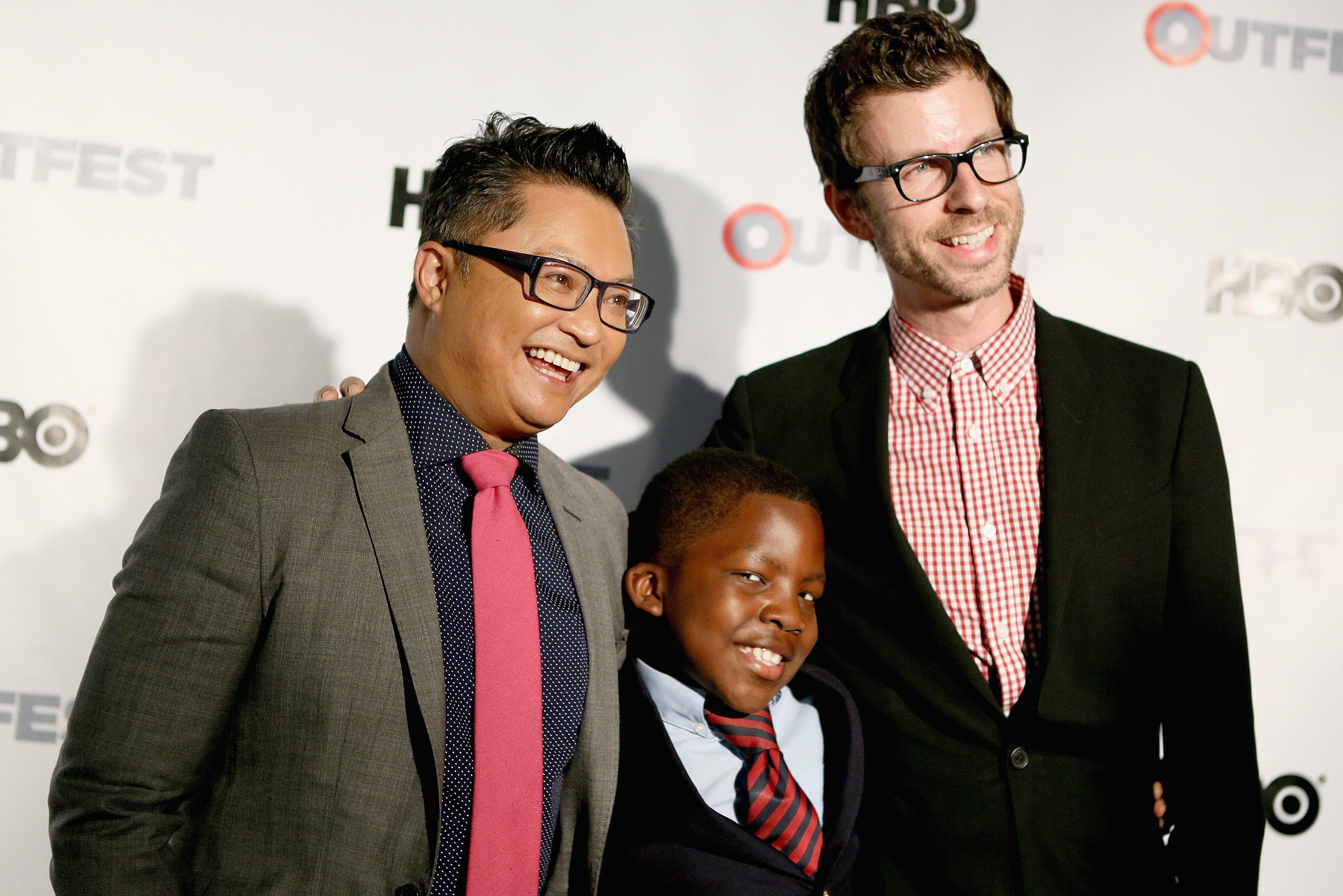 You’ve seen him on countless TV shows, most notably Ugly Betty, but actor Alec Mapa’s most important role is as a parent. Mapa and his husband Jamison Hebert are fathers to a son, Zion, and staunch advocates of adoption through the foster care system. “He was five years old when he was out of foster care and it was a tragic circumstance, so there was a lot of grief happening,” Mapa told Raise a Child. “But now that he’s settled and been with us for five years, he’s so funny and quick-witted. He can be very sarcastic in a very biting way, which is very similar to Jamie and I. On the other hand, he has a physical prowess that I never possessed as a kid. He has a natural athletic ability that doesn’t come from either one of us. He’s a fearless athlete and he’s becoming a very confident person.” This mother helped her adopted son accept his missing piece.

In her book, The Last Black Unicorn, actress and comedienne Tiffany Haddish describe her experience in the foster care system. After her mother was involved in a serious car accident, her personality changed, becoming more violent and abusive. At 12 years old, Haddish and her siblings began being placed among foster families, a revolving door of uncertainty. “You’re dropped in these strangers’ houses, you don’t know these people, these people don’t know you, you don’t know if they’re gonna hurt you, if they’re gonna be kind, you don’t have a clue what’s going on,” she said in an interview with David Letterman. She says her talent is what helped her survive this incredibly difficult time. This is what a stand-up comedian won’t tell you.

Renowned Olympian Greg Louganis, who won five medals during his time competing in the games, was placed in the foster care system at birth. He was adopted at nine months old. Still, Louganis proudly stars in a campaign to champion prospective foster parents in order to gain greater awareness of the help and assistance the system so desperately needs. “I even had the opportunity to briefly meet the woman who fostered me,” said Louganis in a statement through Raise a Child. “I have had amazing opportunities I never would have had otherwise. I am truly grateful.” In 2017, Louganis found his birth father who he had longed hoped to meet.

When actress Cleo King met her now son Titus, he was just five years old and had already lived with three different foster families. “We met Titus on Monday, observed him at school on Tuesday, and had a play date on Wednesday,” she recalls in a story that appeared on the County of Los Angeles website. It only took those three days for King and her wife Camille Thornton to fall in love with the little boy. King is grateful to have been matched with Titus and pinpoints why she thinks people are so nervous to foster. “You don’t know what you’re going to get. That’s what people are afraid of I think,” she told Raise a Child. “But this is what I know today. Even if you have a baby…you still don’t know what you’re going to get. So it’s OK. Just love the one that comes.” Find out the actors who almost played your favorite TV roles.

It seems almost unfathomable that someone associated with high fashion and glamour had a childhood with humble beginnings but that is, indeed, the case for iconic designer Coco Chanel. Born Gabrielle Bonheur “Coco” Chanel. She found herself in the equivalent of the foster system after her mother passed away when she was 12 years old. It was the late 1800s and her father sent Chanel and her sisters to an orphanage maintained by the Congregation of the Sacred Heart of Mary. While never adopted, it was here that she learned how to sew, paving the way for fashion success.

You might think of Marilyn Monroe as the original blonde bombshell, but the actress endured a tumultuous childhood, shifting through many foster homes in her early years. Monroe’s mother, Gladys Baker, suffered from paranoid schizophrenia and dropped her off with her first foster family, the Boldenders, when she was just two weeks old, according to Biography.com. While Baker popped in and out of Monroe’s life for years, there was little consistency and she bounced around to the homes of family friends endlessly until she was able to strike out on her own with a modeling career before settling into acting. Take a look at these rarely seen photos of Marilyn Monroe. 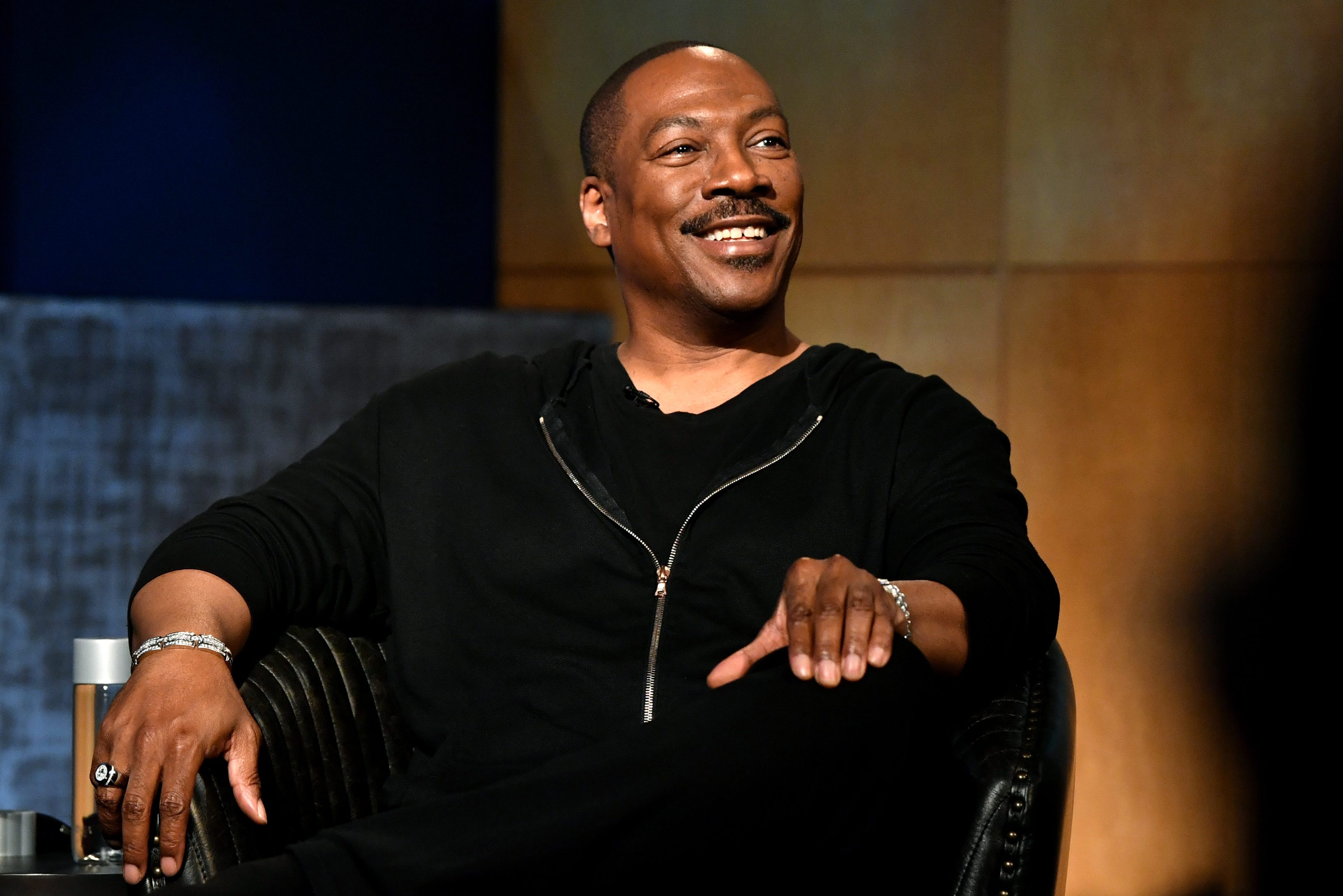 Like many of his peers, actor and comedian Eddie Murphy had a turbulent childhood. His parents divorced when he was three years old, and when he was eight years old he learned his father died. Murphy’s mother, Lillian, became gravely ill and needed to be hospitalized, which sent Eddie and his older brother Charlie into the foster system, according to FosterClub.com. The brothers spent about a year in a foster home, which reportedly wasn’t the most pleasant experience, but Murphy says it forced him to hone in on his sense of humor. Fortunately, the boys were reunited with their mother when Eddie was nine years old and remained with her until he set out on his own. Learn what people get wrong about adoption, from the perspective of an older adopted woman. 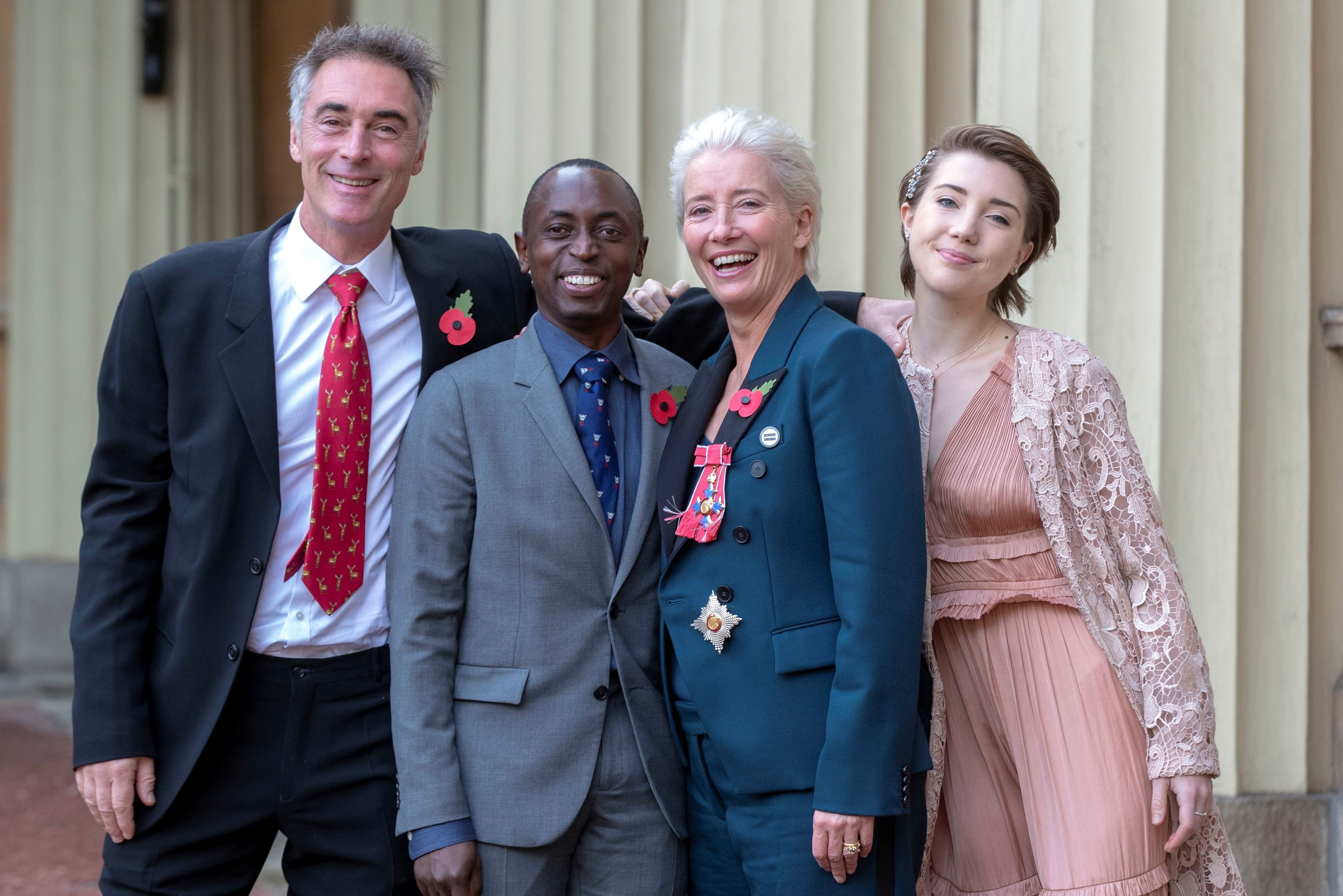 Actress Emma Thompson is all about family. “Family is the center of everything for me,” she told The Guardian. “But family is about connection, not necessarily about blood ties. It’s about extended family—and extending family.” She informally adopted her son Tindy, now 23, when he was 16 years old and began spending time with her family, and was invited right into it. A former Rwandan child soldier, he was embraced by the brood quickly and lovingly. Tindy is now a postgrad student with his own apartment, but reportedly still often visits Thompson and her husband Greg Wise on the weekends. 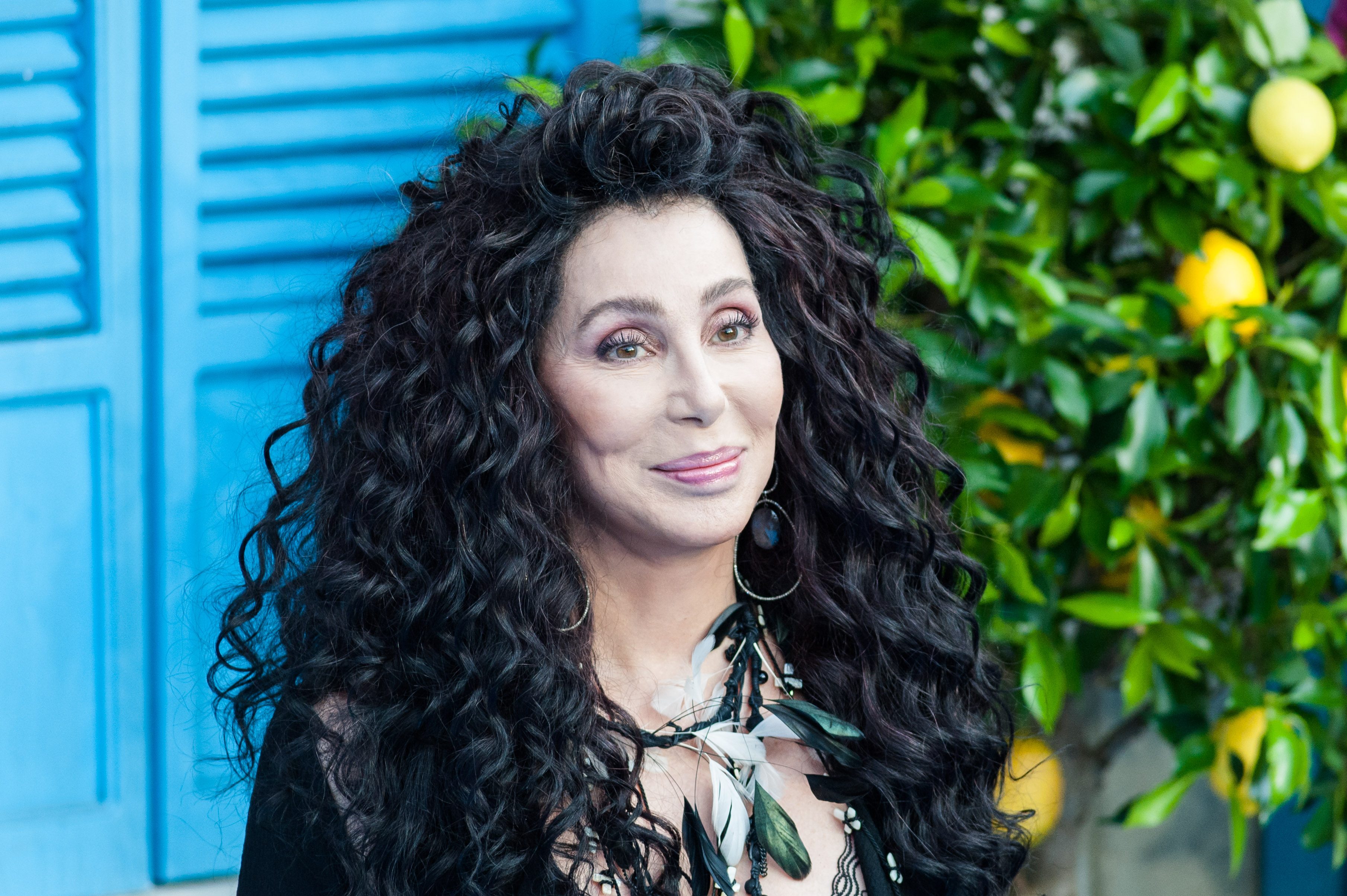 There were several times musician and actress Cher found herself in the foster care system during her childhood. The daughter of a struggling actress, her mother often could not provide for the little girl. Because of this she would put Cher (born Cherilyn Sarkisian) into foster care and take her back when she could make ends meet. One might think this would have turned the child off from the idea of pursuing entertainment as a career, but Cher persevered to become the icon she is today. Now, 73, the celebrity is mother to Chaz Bono, whom she shared with the late Sonny Bono, and Elijah Blue, whom she had with Greg Allman. Adoption is very common–learn about more famous celebrities were adopted. 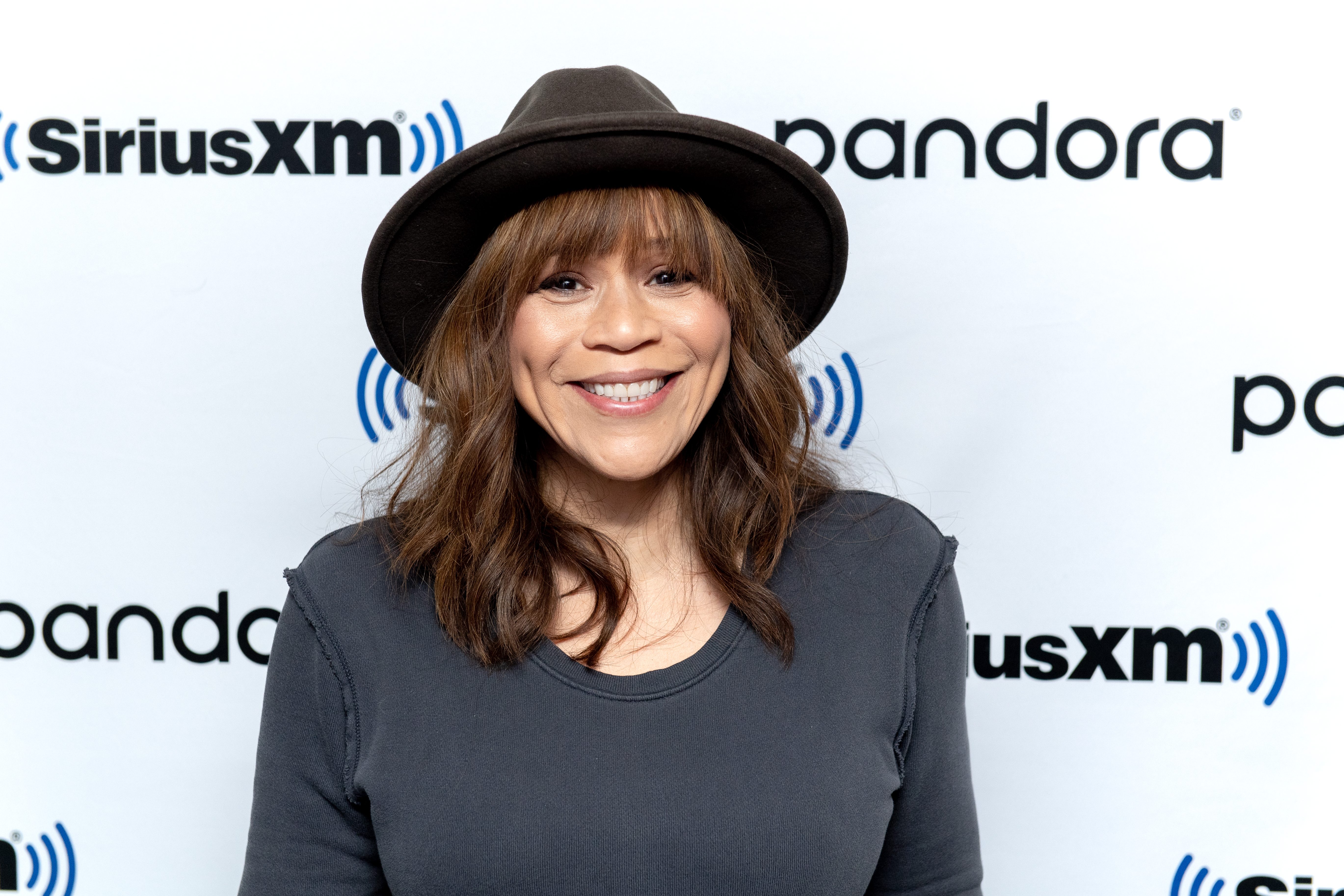 Former The View co-host and actress Rosie Perez found herself as a ward of the state for nearly a decade of her childhood, making her a fierce advocate for children’s rights today. Perez was admitted into a Catholic home for boys and girls at the tender age of three because her mother, mentally ill, could not care for her, according to Children’s Rights. Longing to reside with her aunt, Perez continued to be moved around to various homes that didn’t deliver on the love and attention she craved. “No one tucked us in. No one kissed us goodnight. No one told us they loved us and they’d see us in the morning,” she wrote in her memoir, Handbook for an Unpredictable Life. Find out the things adoptive parents wish others knew,

Nia Vardalos adopted her daughter Illaria through the foster care system in 2008, later writing about the experience in her book Instant Mom. The little girl was just three years old at the time she was matched with Vardalos and actor Ian Gomez (to whom the actress was married until 2018). “What I didn’t know then is that there is no damage that has been done to a child that can’t be undone with love,” she wrote in an essay for Guideposts magazine. “I have met so many kids who have been adopted from foster care and have gone on to live fantastic, productive lives. It’s why I became the spokesperson for National Adoption Day.”

Next, check out these real-life adoption stories that will melt your heart.