14 Most Famous Women in Flight

Ninety-one years ago on June 18, Amelia Earhart became the first woman to fly across the Atlantic. She was a passenger on that nearly 21-hour journey but before long she'd make more history as a pilot herself. Here's a look at Earhart and more famous women in flight.

In an ideal world, Bessie Coleman would not only be considered a national treasure but she’d also be a household name thanks to a blockbuster movie, popular graphic novel, and a viral-hit serial podcast detailing her remarkable life. Sadly, none of that has happened yet and so the name of the first African-American of any gender to ever earn a pilot’s license (in 1921, doing so after moving to France since she wasn’t allowed to accomplish this feat in the United States because of the color of her skin and her gender) doesn’t roll effortlessly off too many tongues. Sadly, Coleman died in a plane accident before realizing her dream of opening her own flight school for African Americans, but she gave speeches and showed off her flying tricks to inspire others, only doing so in places that were not segregated. It’s time for all Americans to know about Queen Bess, who was honored with a postage stamp in 1995 (shown). We’re still waiting for Bessie’s Hollywood treatment but here are 11 films that celebrate remarkable women. 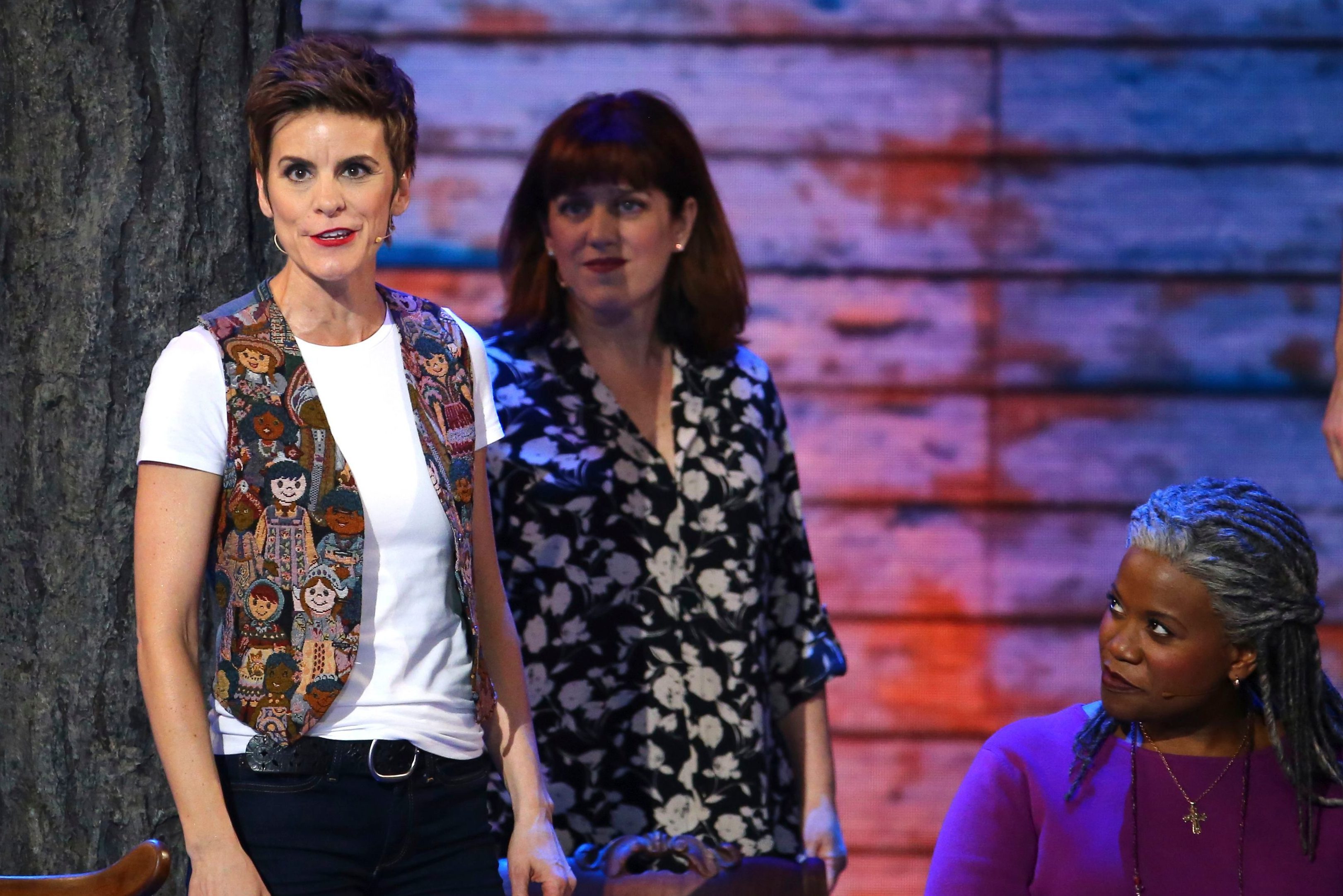 A pioneer in commercial aviation and currently a character portrayed by Tony Award Nominee Jenn Colella (who wears her actual pilot blazer in the hit 2017 musical Come From Away), Beverly Bass ranks as only the third woman hired by American Airlines and in 1986, as the first women to ever earn captain stripes for a commercial airline. While flying reserve in that same year, she also became a part of the first all-female airline crew the world has ever seen. Famously (and this is a core part of the Come From Away storyline), Bass was in the air on the morning of 9/11 and piloted one of the planes which landed in Gander, Newfoundland. Watch and listen to Colella sing the song from the show that the New York Times describes as, “a near-verbatim transcript of her interview with the writers. It dramatically spells out her life, wrapping together the dreams of a little girl who wanted to fly, the gendered obstacles facing women in aviation in the mid-20th century, and the distinctive pain pilots felt at the use of airplanes as weapons on that terrible day.”

Women in Aviation International notes that “if we accept the premise that the first machine-powered flight by humans occurred on December 17, 1903, with the Wright Brothers, it is appropriate to begin with an almost forgotten contributor to that great event: their sister Katharine Wright.” The financial and moral support she provided was not lost on her famous brothers. Wilbur had the foresight to remark that, “if ever the world thinks of us in connection with aviation, it must remember our sister.” Katherine Wright first flew with her brothers for their demonstration flights in France in 1909, but the Wright Brothers’ business manager Edith Berg beat her to the title of first woman airplane passenger a year earlier. Find out more history lessons your teacher got wrong.

America’s first woman in space began her history-making career in 1978, as one of NASA’s first six female astronauts. A mere five years later, Ride would experience “her first spaceflight as a mission specialist on STS-7, NASA’s seventh shuttle mission, aboard the space shuttle Challenger.” Sally Ride’s life after spaceflight was also monumental. Through her six science-themed children’s books and her company Sally Ride Science, the legendary astronaut actively worked to encourage young girls to embrace science. Not only was Sally Ride the first American woman in space, but she is also the first acknowledged gay astronaut. 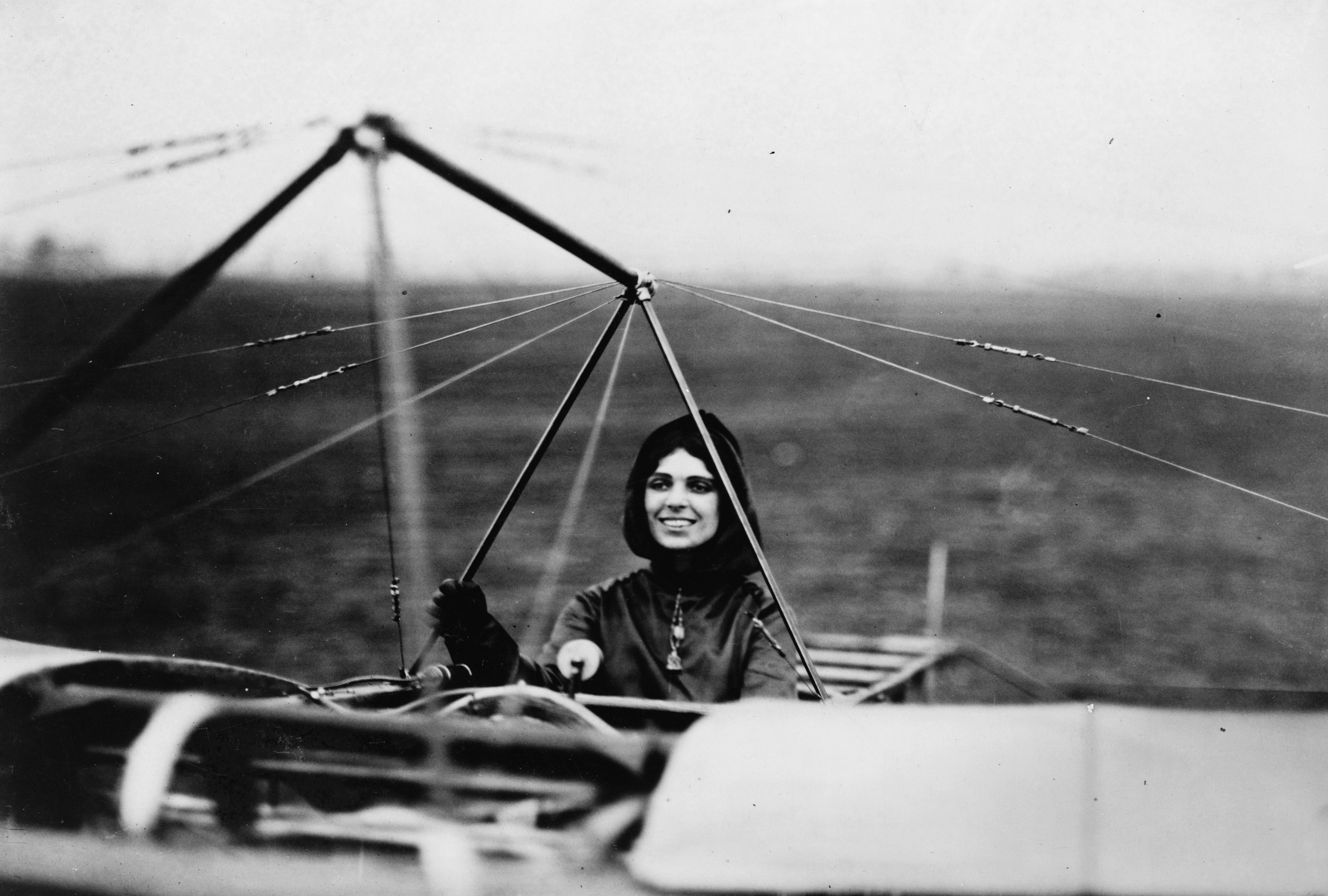 In August 1911, photojournalist, screenwriter, and actress Harriett Quimby became the first American woman to earn a pilot’s license (license #37 overall from the Aero Club of America) and was only the second woman in the world to do so (behind Baroness Raymonde de la Roche in France a year earlier). Less than a month later, she became the first woman to fly at night and then by the following spring she checked off another “first women” box when she flew her own aircraft across the English Channel from Dover England to Calais France, relying only on her compass because of cloudy skies. America’s First Lady of the Air was killed in an aircraft accident in 1912. Here are 19 of the scariest moments pilots have experienced.

Harriett Quimby’s friend Matilde Moisant was the second American woman to earn a pilot’s license. She’s remembered for setting several altitude records and was the first person of either gender to land a plane in the altitude of Mexico City. The Smithsonian National Air and Space Museum notes that “Moisant made her exhibition debut at the Nassau Boulevard Aviation Meet in September where she won the Rodman-Wanamaker altitude trophy by flying her 50 horsepower monoplane to an incredible 1,200 feet. She beat both Quimby and French pilot Helene Dutrieu. Moisant flew in meets throughout the country and Mexico until the early spring of 1912, often flying at higher altitudes than most male pilots.” Her life story, along with her brothers, is retold in the biography, The Magnificent Moisants: Champions of Early Flight.

In 1918, the U.S. Postmaster General appointed Marjorie as the first female airmail pilot and, together with her sister, brother, and mother, established a flying school in Texas for both men and women. She’d go on to promote aviation around the world and taught over 100 military men to fly before and during World War I. Yet at the same time, her sister Katherine’s request to fly combat missions for the army during WWI was denied twice solely on the basis that she was a woman. It was said that Katherine was a better and more experienced pilot than some of the men serving in the military. Learn more about the women in Great Women in Aviation #5, then discover more trailblazing female firsts.

The most famous pilot, male or female, in American history was, first, famously the first woman to fly across the Atlantic Ocean as a passenger on that iconic 20-hour and 40-minute flight in June of 1928. Later that summer, “Earhart flew solo across the United States and back—the first time a female pilot had made the journey alone.” When she flew alone from Newfoundland to Ireland in 1932, Amelia Earhart became the first person of any gender to fly solo across the Atlantic ocean. After a successful book tour and more flying competitions, she made history again as the first pilot to accomplish a solo flight across the Pacific, traveling from Oakland to Hawaii. Earhart famously went missing during one leg of her ambitious flight around the world in 1937—conspiracy theories about her disappearance still exist to this day.

A pioneering African American pilot whose leadership in black pilot organizations in the 1930s created opportunities for others. Bragg enrolled in aeronautical school in 1933 and was the only woman in the mechanics class. Although facing discrimination because of both her race and gender, she didn’t relent in her pursuit of flying. While completing a postgraduate degree, Bragg worked hard to save money, eventually buying her first of three planes for $500, and shared it with the Challenger Air Pilots Association. That group, inspired by Bessie Coleman, built its first airstrip in 1933.

Janet Bragg received her commercial pilot’s license in 1943 yet was turned down because of the color of her skin when attempting to join the war effort. You can learn more about her in her autobiography, Soaring Above Setbacks. Bragg’s story of overcoming discrimination is empowering, as are the stories of these 9 women you didn’t learn about in history class.

If not for engine failure, the world may know more of pilot Ruth Nichols who, in 1931, attempted to be the first woman to fly solo across the Atlantic. Unfortunately, that hopeful flight was aborted but did net her a women’s altitude record at the time. One year later, Amelia Earhart would traverse the Atlantic and the rest is history. Later that same year, Nichols did break a speed record. In 1939, she founded Relief Wings, an organization that coordinated private aircraft to assist with emergency and disaster relief, and contributed to winning World War II by offering those services to the Civil Air Patrol in 1942.

In 1927, Elinor Smith, at 16 years old, became the youngest pilot ever to receive a Federation Aeronautique International (FAI) license, signed by Orville Wright. The next year, Smith successfully maneuvered a plane under all four New York City bridges, resulting in much publicity and a ten-day grounding by the Mayor of New York. She was the first and only pilot to accomplish this daredevil feat. Her life of adventure didn’t stop there. In November 1929, Elinor Smith tried for the first in-flight refueling endurance record for women, which lasted over 42 hours. Smith was voted the Best Woman Pilot in the United States in 1930…at the ripe old age of 19!

Only 4 percent of airline pilots today are women and of that small number, less than 10 percent are women of color. Beth Powell, who counts Bessie Coleman as her primary influence and is currently a commercial pilot with American Airlines, is one of them. According to an interview in Essence, Powell grew up in Jamaica and thanks to a proactive teacher, was introduced to the idea of being a technical learner and the world of aviation. Two years later she’d earn her private pilot license and then at the age of 18, her commercial license. By 21, Beth Powell was a commercial airline pilot. Now, Powell is merging her own scholarship with the Sisters of the Skies, in hopes of exposing more African American girls to the wondrous possibilities of flight.