13 Rarely Seen Photos of the First Women Voters in 1920

Get a glimpse of history—and the women who made it. 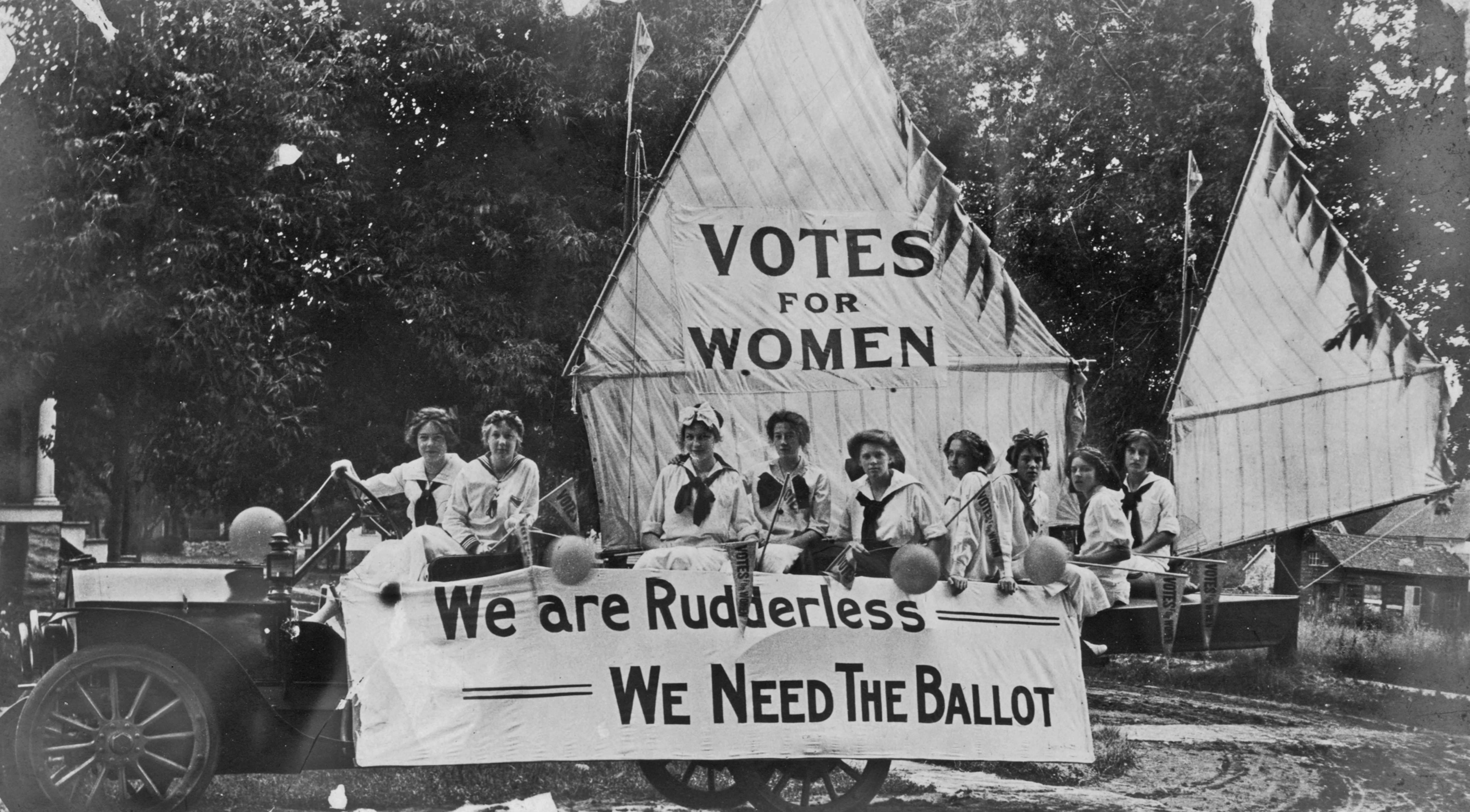 The day that everything changed

The United States has always been thought of as a land of opportunity and freedom, but historically, those who weren’t property-owning white men were not initially afforded the same civil and political rights. And despite accounting for half the population, women were excluded from voting and, therefore, from fully participating in democracy for the first 144 years of the country’s existence. You might be surprised to learn that these 15 countries actually gave women the right to vote before the United States did.

The campaign for women’s right to vote in America officially began in the 1840s when suffragists like Elizabeth Cady Stanton and Lucretia Mott launched a nationwide effort for voting rights. After nearly a century of fighting, the 19th Amendment—which stated that “the right of citizens of the United States to vote shall not be denied or abridged by the United States or by any State on account of sex”—passed in both the House of Representatives and the Senate in 1919. After that, it had to be ratified by 36 states. That occurred on August 18, 1920, when Tennessee ratified the 19th Amendment. Here are 13 images showing what it looked like when women were finally granted the right to vote. 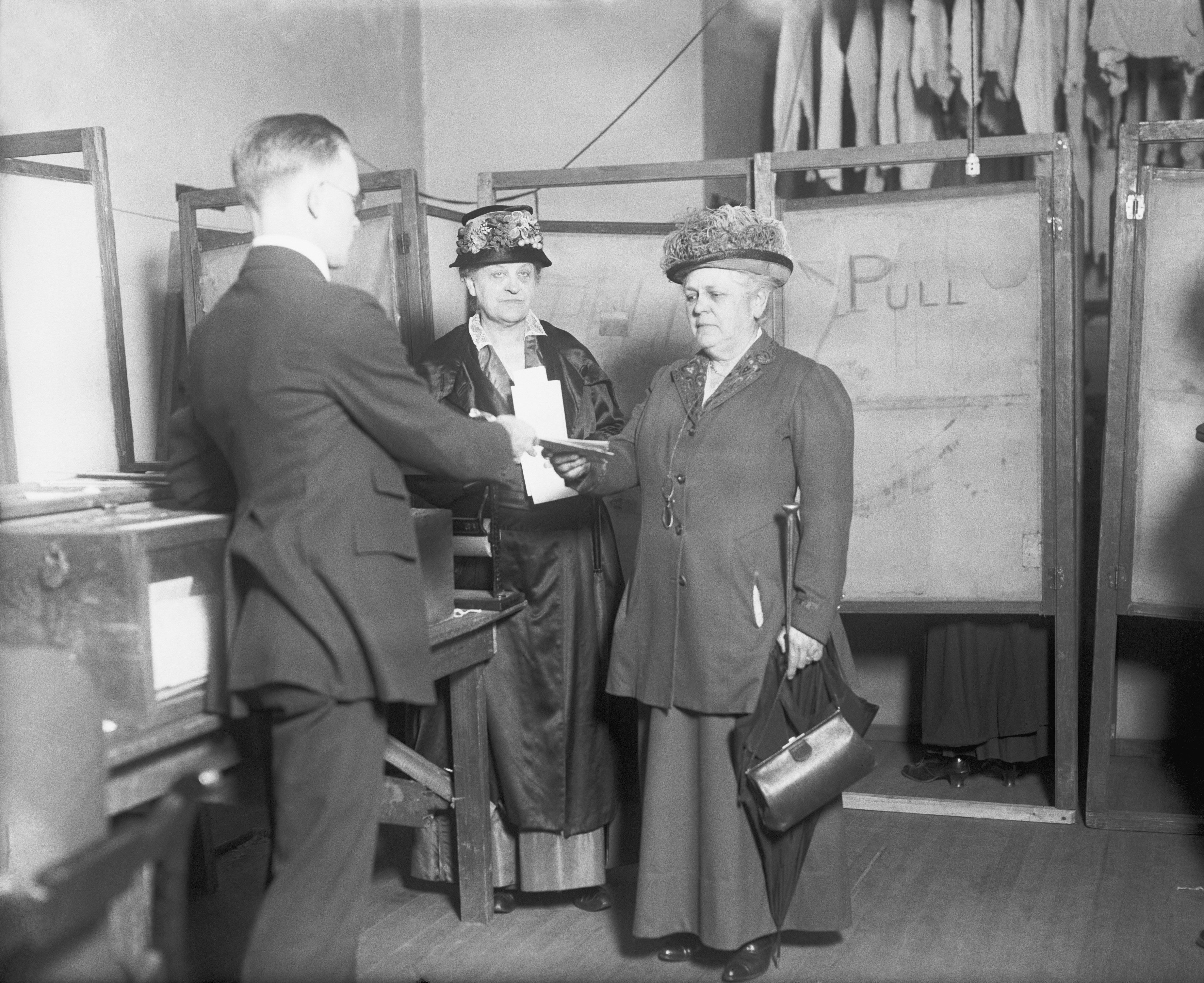 On November 2, 1920, women were legally permitted to vote in the presidential election for the first time. For those involved with the suffrage movement, that day was the culmination of years of hard work and sacrifices. Pictured here on election day in 1920, Carrie Chapman Catt and Mary Garrett Hay—both leaders of the suffrage movement—cast their ballots for the first time at the polling place located at 111th Street and Broadway in New York City. Catt directed the National American Woman Suffrage Association and founded the League of Women Voters, while Hay was known for her suffrage work in New York state. Check out these 52 other astonishing facts you never knew about U.S. presidents. 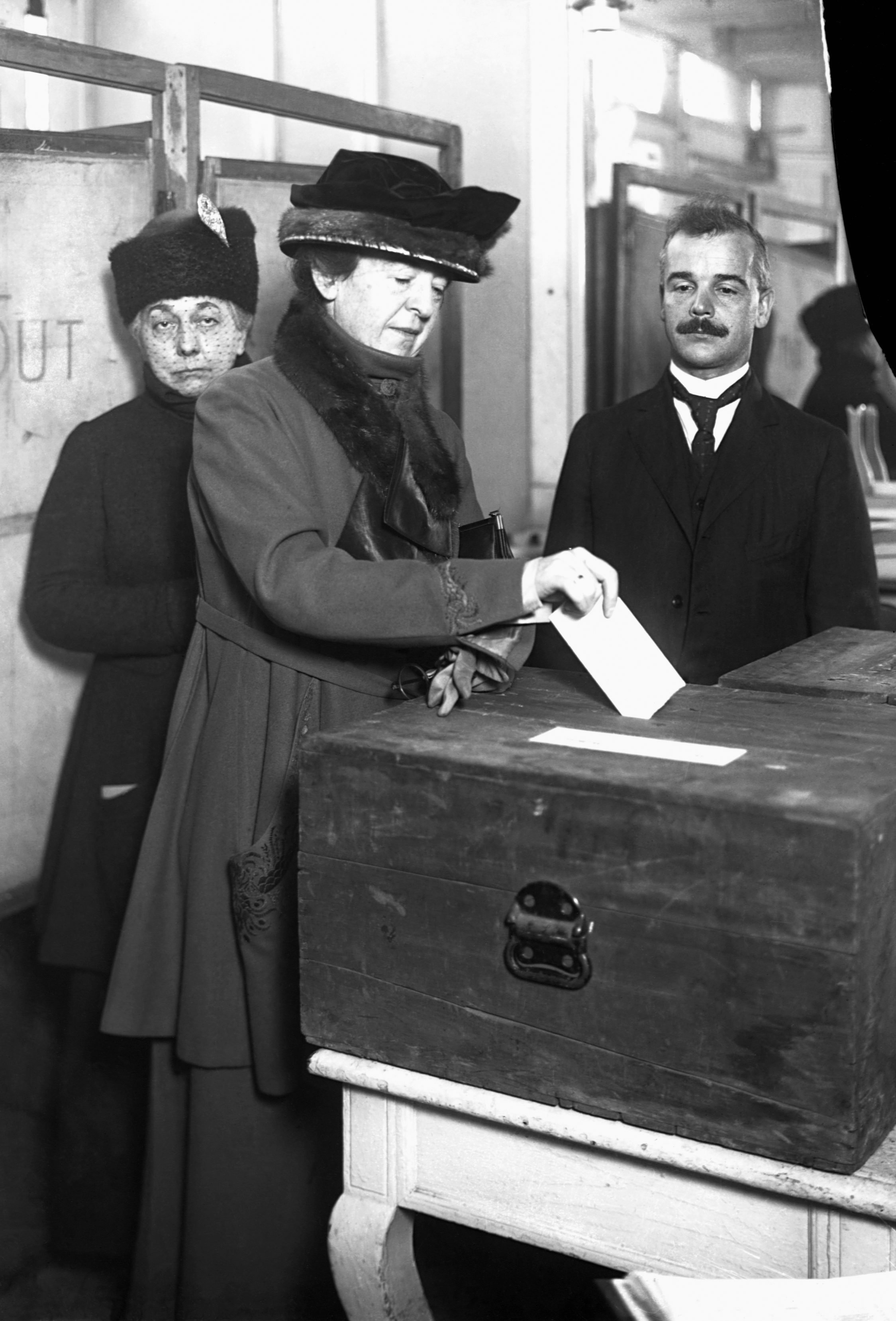 A violinist casts her ballot

Born in Illinois in 1868, Maud Powell was a famous violinist. At a time when only musicians from Europe were taken seriously, she became the first American classical musician—male or female—to be truly embraced by audiences across the Atlantic. In 1904, she became one of the first musicians to make a recording of her performing. She was awarded a posthumous Lifetime Achievement Grammy Award in 2014, 94 years after her death. Here is Powell placing her ballot in a ballot box in 1920. Here are more moments that changed women’s history forever. 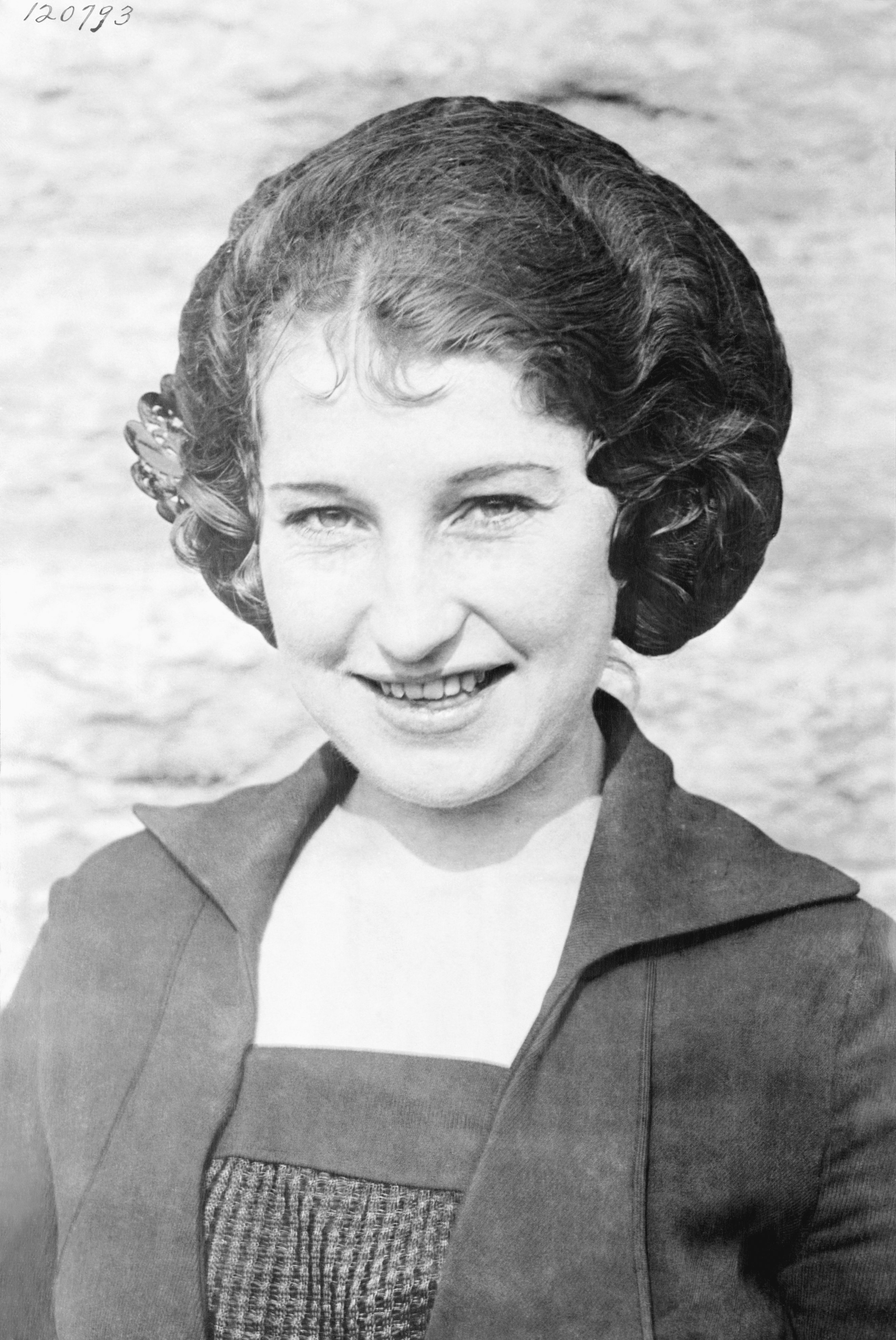 The first in the state

After the 19th Amendment was ratified on August 18, 1920, many women were eager to be the first to cast their ballots in an election. Officially, that title went to Marguerite Newburgh of South St. Paul, Minnesota. Though the presidential election didn’t happen until November, there was a special election on a municipal bond proposition on August 27, 1920. Newburgh arrived at the polls at 6 a.m. that day and was the first to vote in her precinct. Read up on these 30 pioneering women who changed the world. 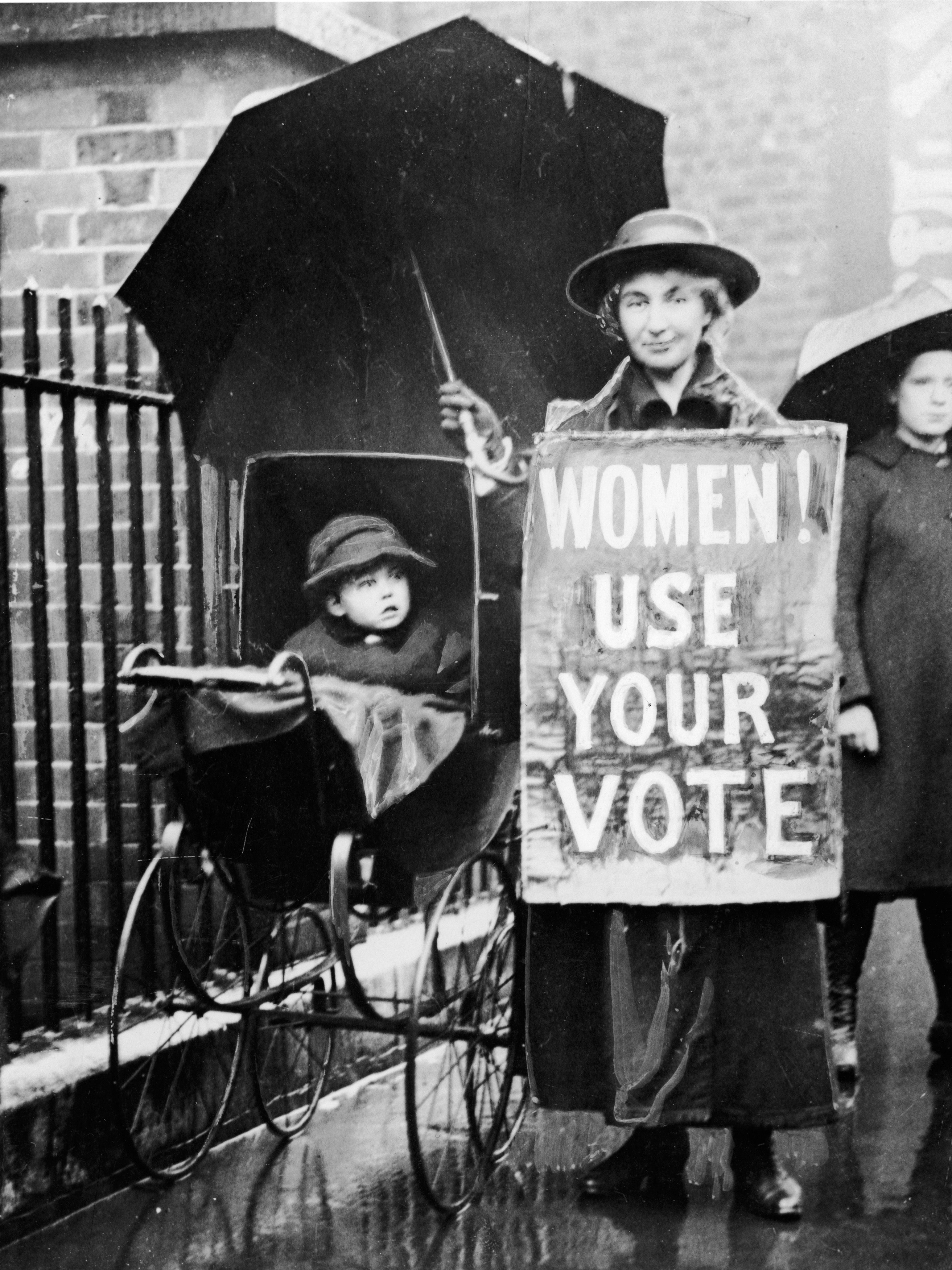 Initiatives to “get out the vote” are nothing new, and once the 19th Amendment passed granting women that right, there was also a campaign encouraging them to exercise this new privilege. Here, an American suffragist with an umbrella stands next to a baby carriage and wears a sign proclaiming, ‘Women! Use your vote,” in 1920. Not everyone was on board with women being able to vote—including some women—so campaigners like this tried to convince them otherwise. By the way, this is the real reason we vote on a Tuesday in November. 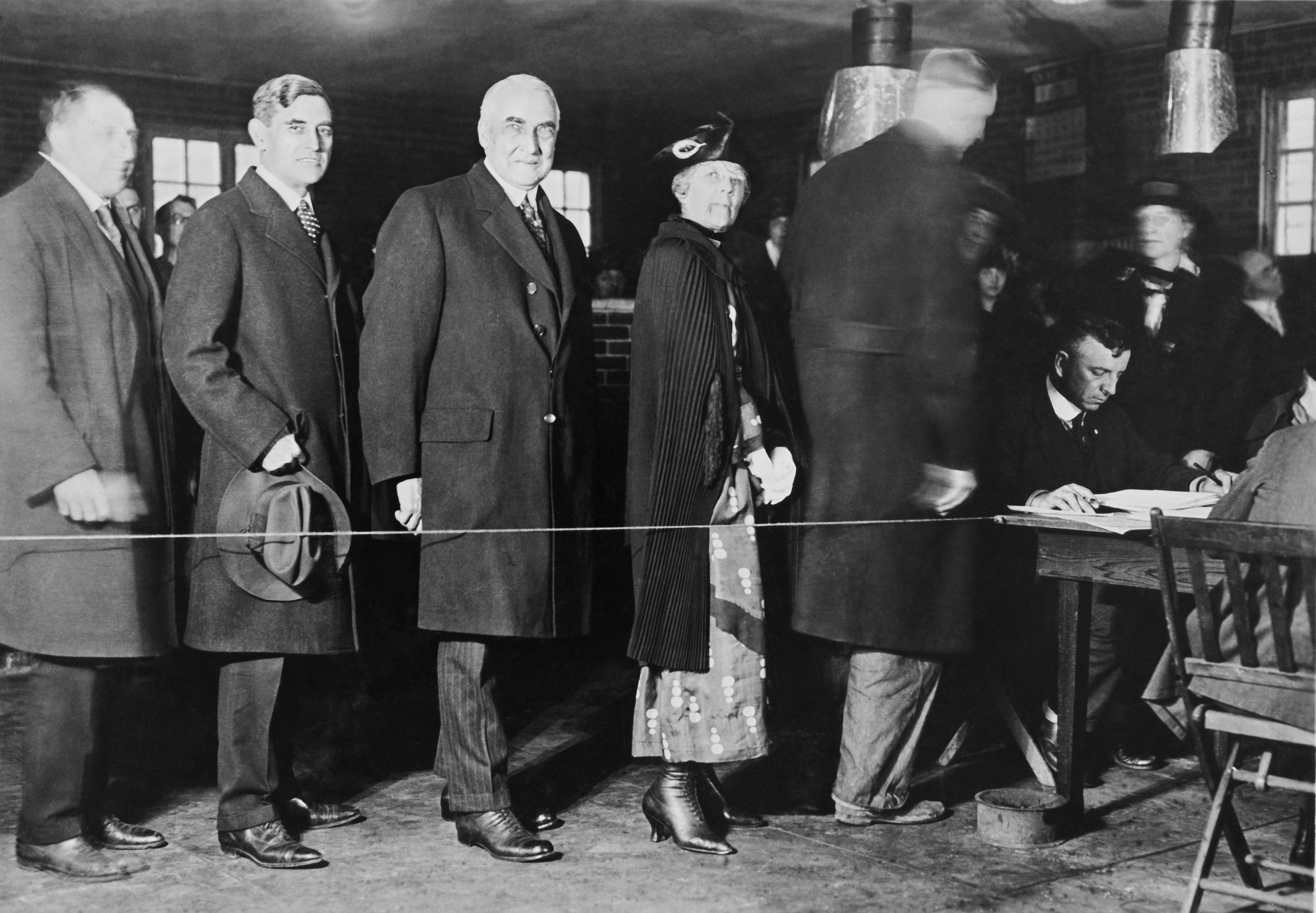 The presidential election of 1920 featured two newspaper editors from Ohio as the nominees for the two major parties. The Republican nominee, Warren G. Harding, was also a United States Senator, while the Democratic nominee, James M. Cox, was the governor of the state. This photo shows Harding and his wife, Florence Harding, standing in line to vote. It was the first time a potential First Lady had the opportunity to vote for her husband. Here are another 22 surprising presidential firsts you never knew about. 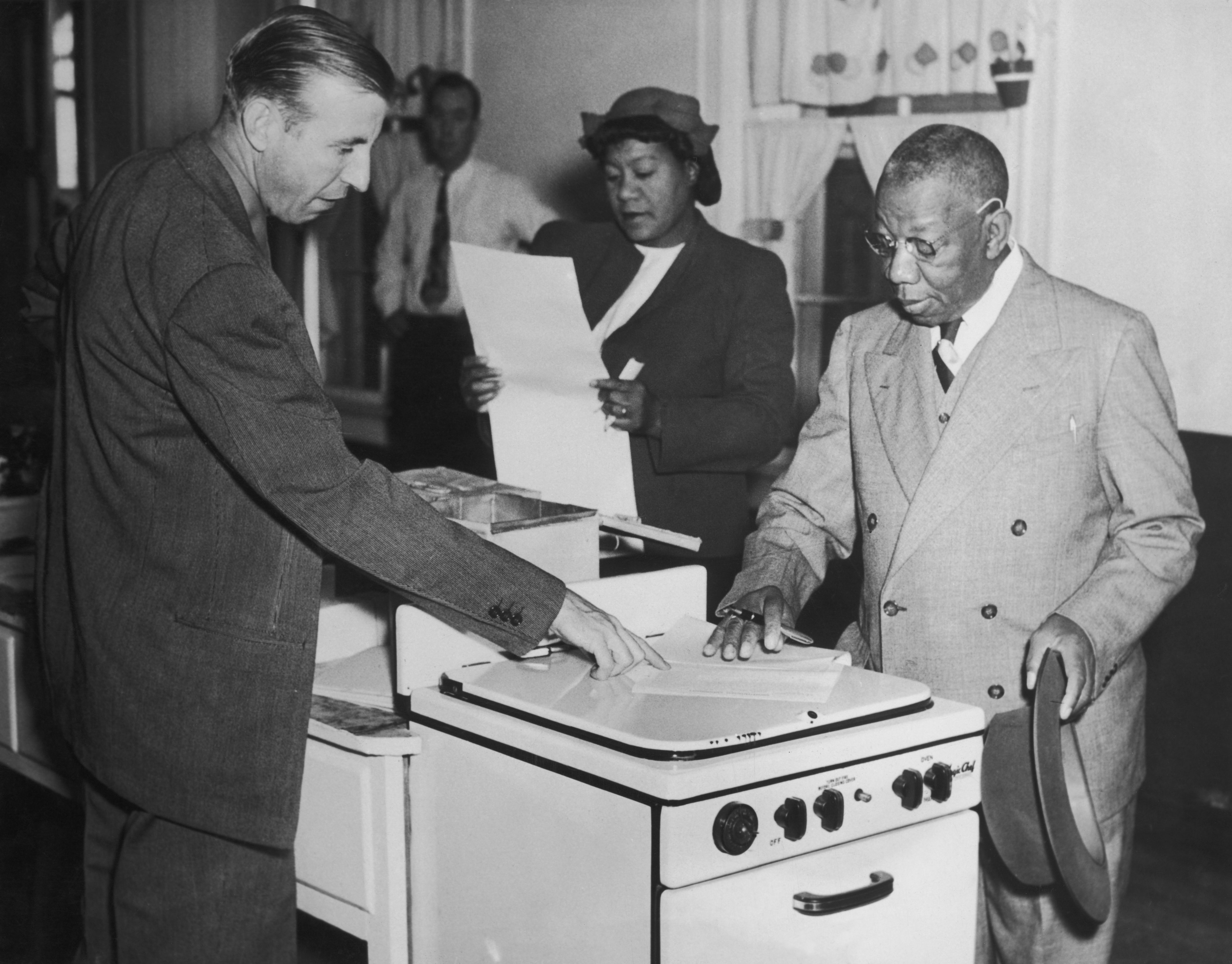 Even though the 15th Amendment dictated that states couldn’t deny a citizen a vote based on their race and the 19th Amendment granted women the right to vote, that didn’t mean that everyone was able to cast their vote right away. “The 15th and 19th Amendments actually just say what states can’t do,” Elena Popchock, a curator at the National Constitution Center, told PBS. “They say that they can’t discriminate on the basis of race and gender. But states can use other means to discriminate. They could use poll taxes to stop the poor from voting, or literacy tests [to block those with less education]…. African-American women were virtually excluded at that time.” This photo shows black Americans voting for the first time in Charleston, South Carolina, during the U.S. presidential election of 1948. 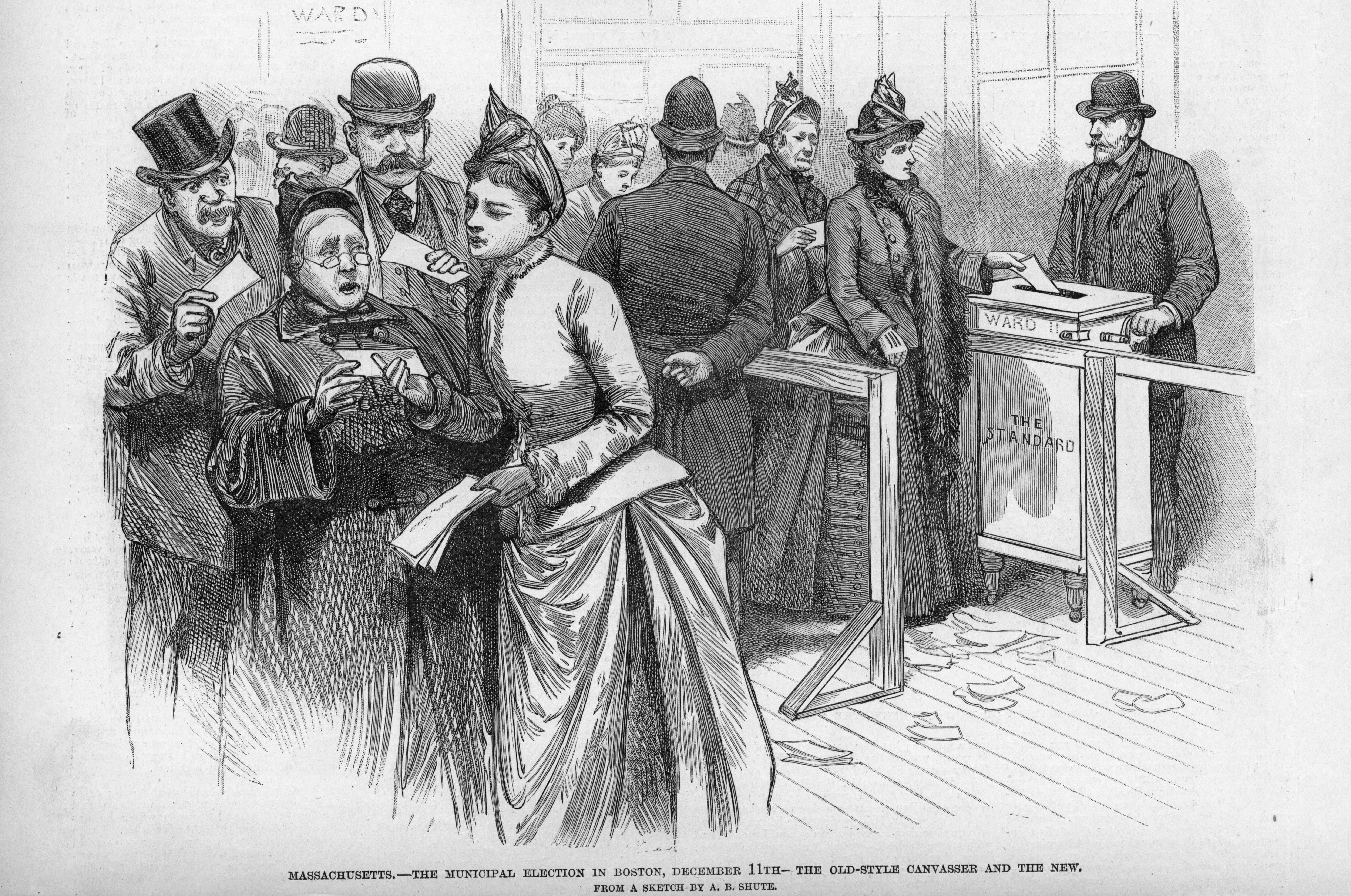 Ahead of the game

Not all women waited until the 19th Amendment passed to cast their first vote. This illustration by AB Shute shows women voting for the first time in Boston’s municipal elections in 1888. These women weren’t alone: Hundreds of women attempted to vote in the 1860s and 1870s, believing that the 15th Amendment—which said the right to vote would not be denied on the basis of race or color—granted them this right. You probably never heard about these stories of trailblazing women who made history either. 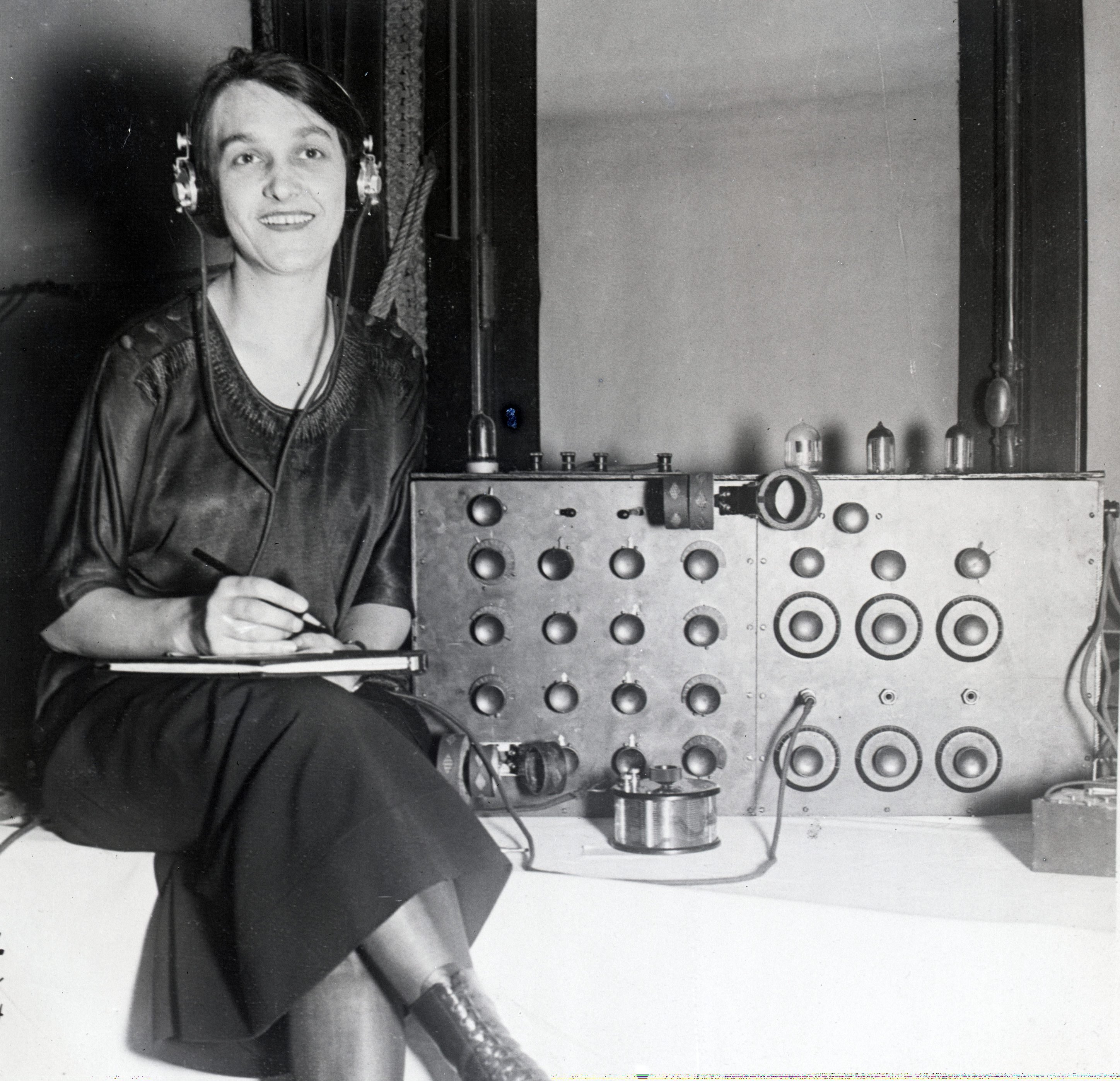 A day of firsts

The election of 1920 wasn’t only notable because it was the first in which women were permitted to vote: It was also the first time that election returns were received by wireless radio transmissions. Though there were only approximately 1,000 listeners at the time, this broadcast revolutionized the way that people experienced elections, making the whole process more immediate. This photo shows Claire Horn listening in on the election returns at the wireless outfit in Hamilton, Chicago. Here are another 20 things you had no idea happened in 1920. 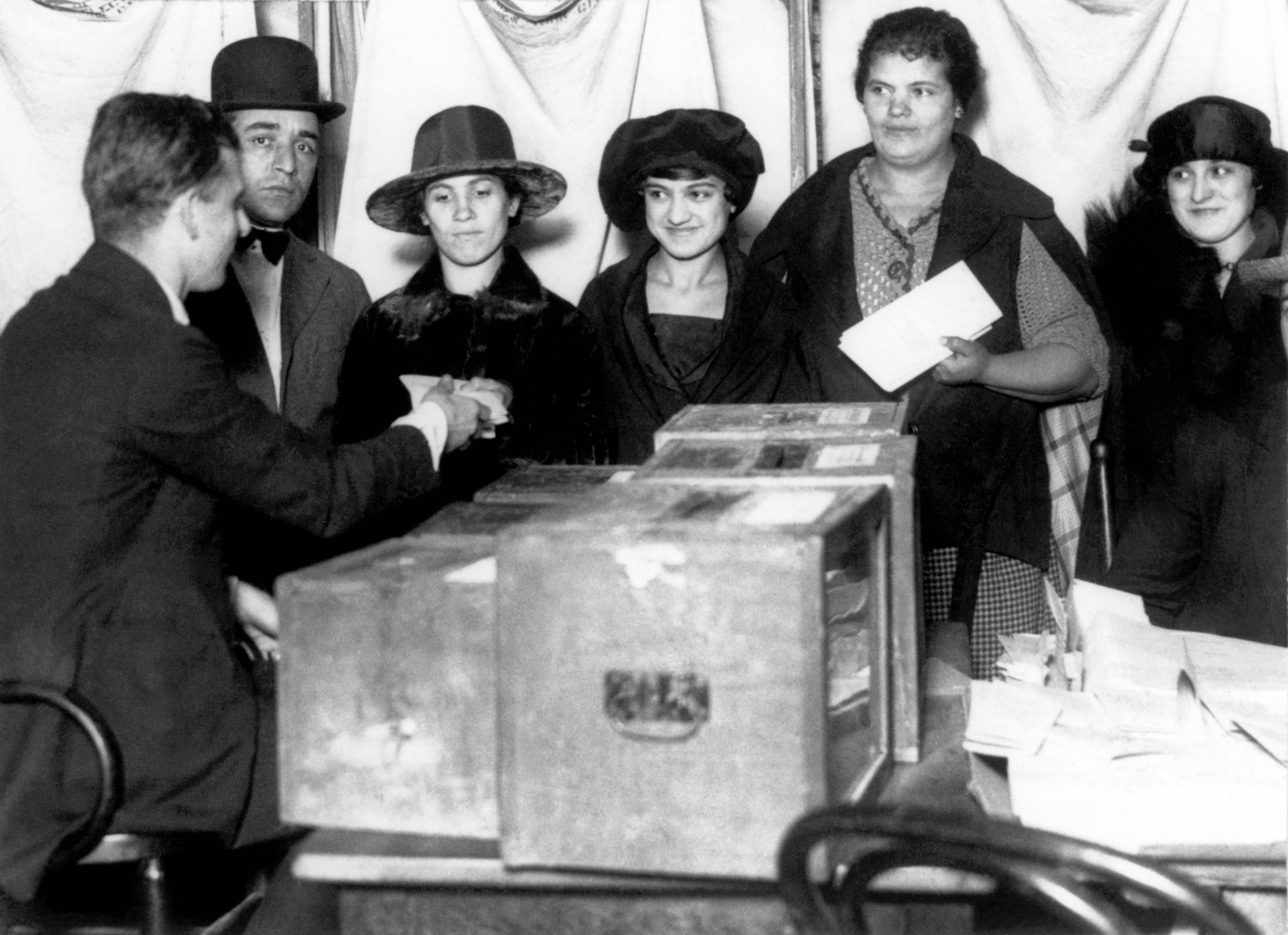 Outnumbered at the polls

This photo, taken in New York City in 1920, shows women lined up to cast their ballots for the first time. Though an estimated 10 million women voted on November 2, 1920, in the presidential election, that was only approximately one-third of those who were eligible. Even though this meant that men outnumbered women at the polls five to three, many newspapers across the United States reported long lines of enthusiastic women eager to cast their votes for the first time. In addition to the 19th Amendment, these things are turning 100 in 2020. 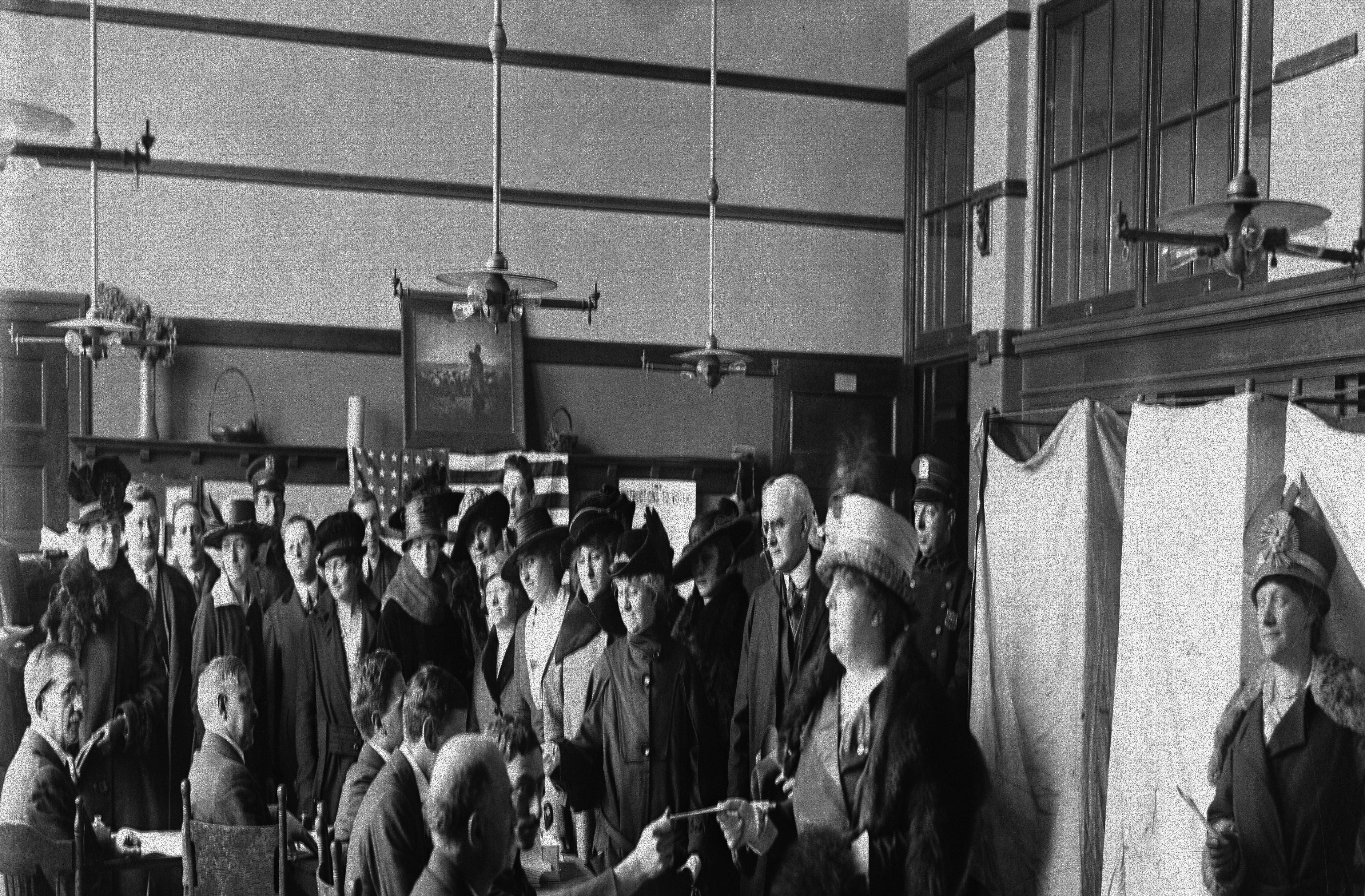 The reason for a landslide presidential victory

Women have been hugely influential on the outcomes of elections since being granted the right to vote in 1920. Harding won the presidential election of 1920 in a landslide victory, which some attribute to his advocacy for women’s suffrage, which dated back to the 1870s. This photo shows one of many crowded polling locations full of voters making their voices heard. Do you know the answers to these presidential trivia questions everyone gets wrong? 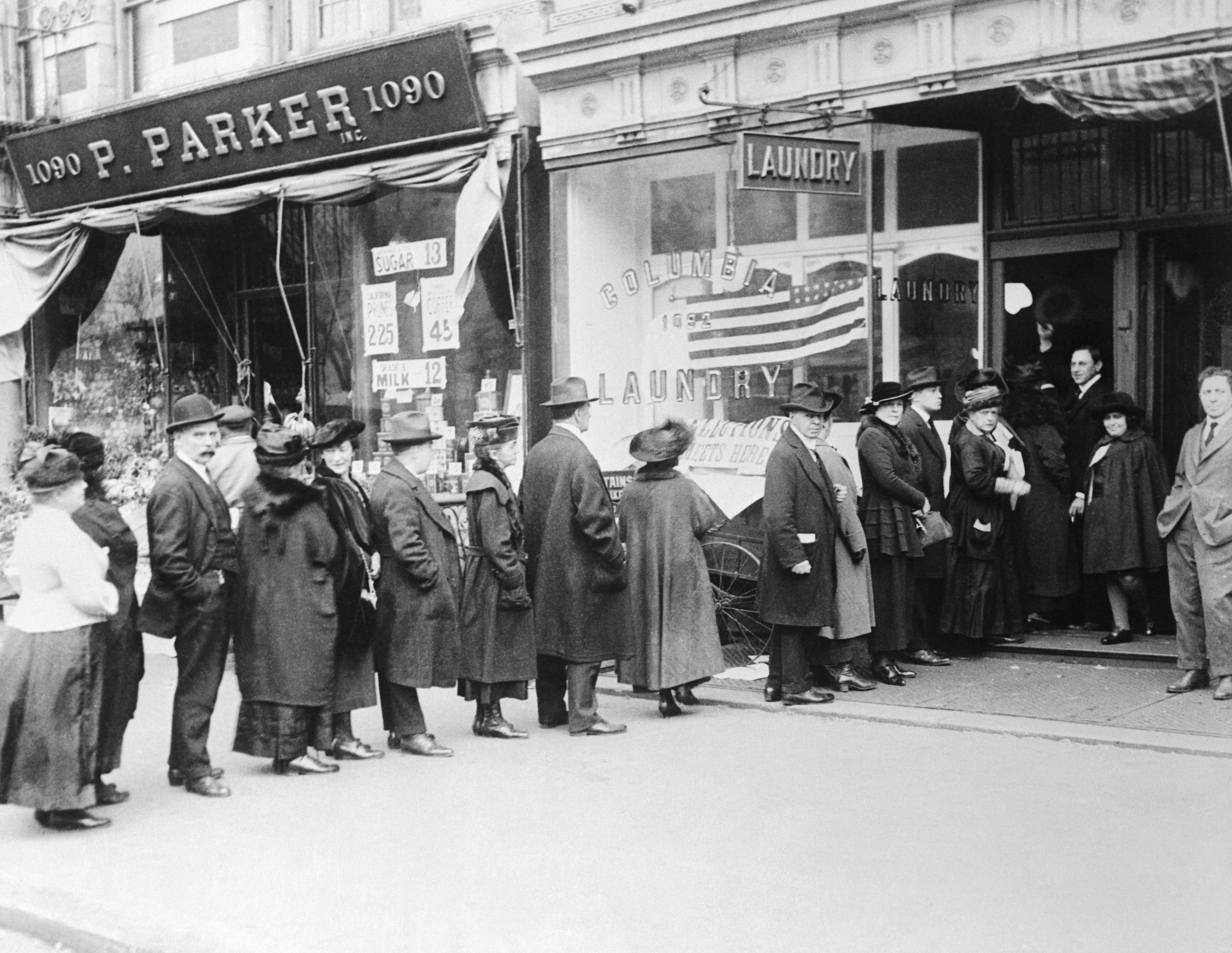 The sidewalks of New York

The election meant that many women who were typically in charge of families and households spent some time away from their usual duties while voting. The following day’s New York Times reported that the city’s Girl Scouts put their first-aid training to use, caring for babies and young children while their mothers were out voting. Other Scouts were stationed at hospitals dealing with related emergencies. This photo shows women lined up to cast their first votes at a polling location at 111th Street and Broadway in New York City. While women were given the right to vote in 1920, gender equality is still not fully stipulated by the U.S. Constitution. Check out these surprising facts and figures about the Equal Rights Amendment. 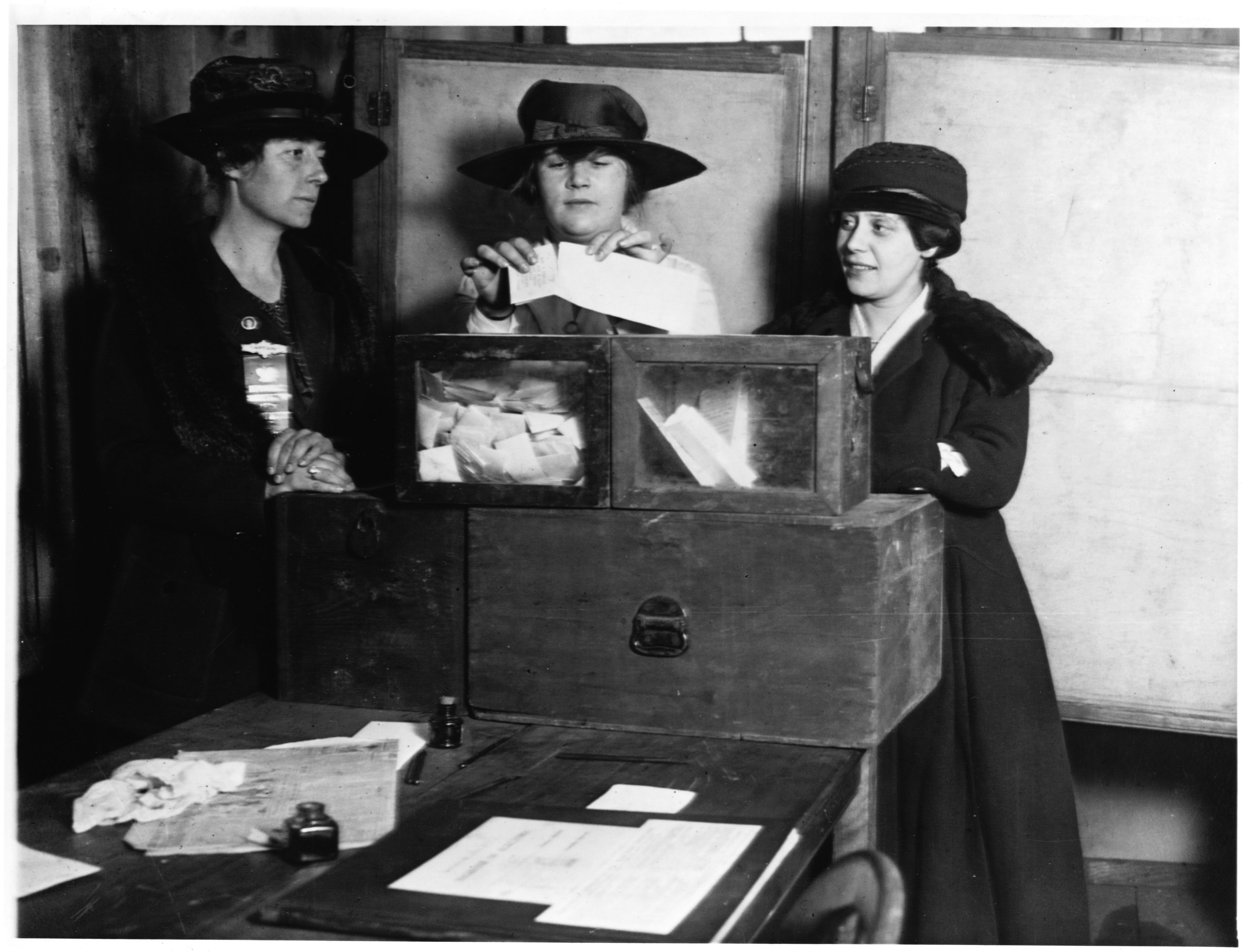 A big day at the ballot box

Here, three women are pictured voting for the first time in 1920 at a polling station in New York City. Though many women did take advantage of this historic first, Alice Paul, the leader of the National Women’s Party, said that things would be more organized in future elections, the New York Times reported. She also noted that women’s influence on future elections would be greater because they would have more of an opportunity to have a say in the candidates who ran for office. These early feminist quotes still resonate today. 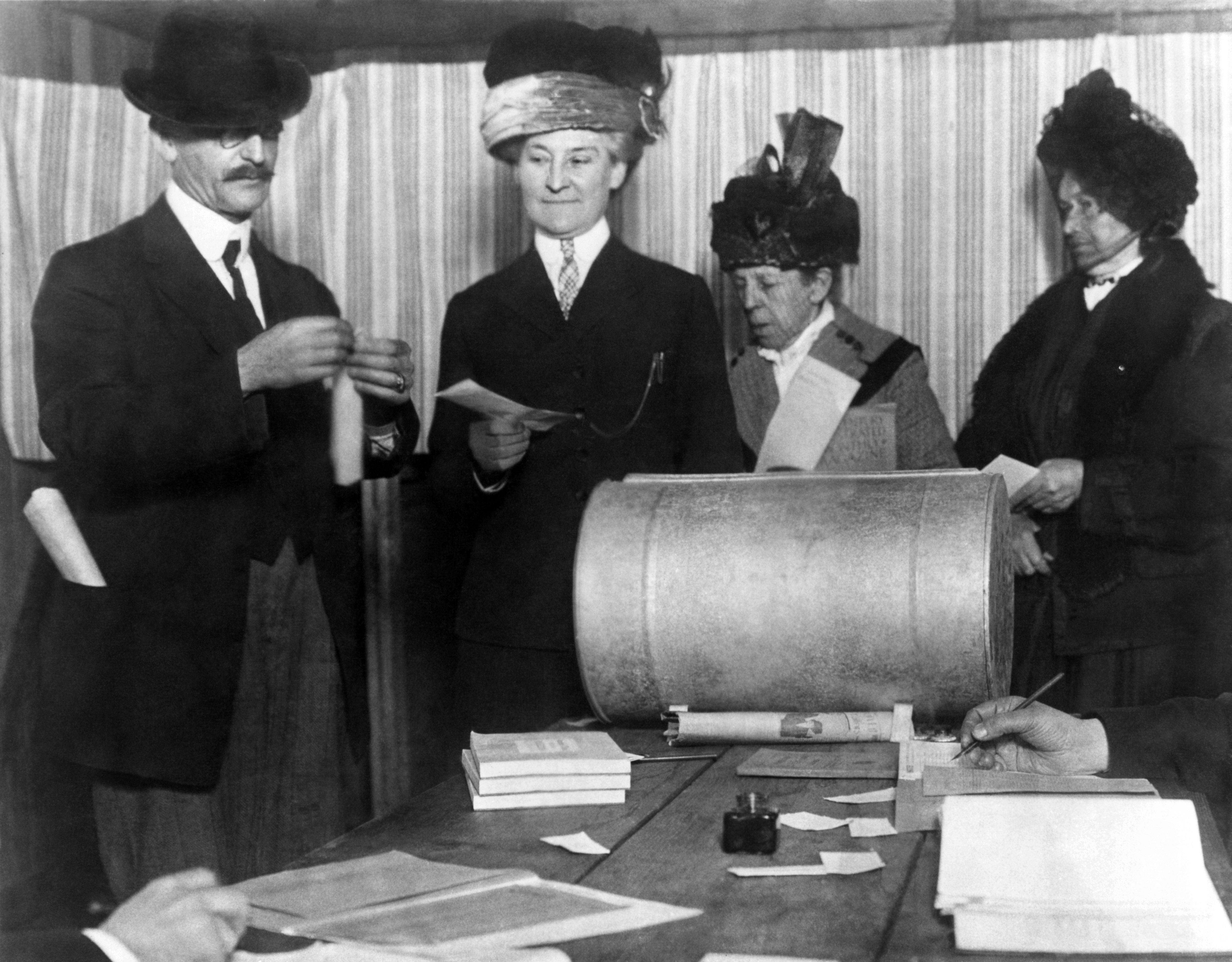 These three unidentified women made history by becoming the first women to vote in an election in San Francisco after the 19th Amendment was passed. In addition to selecting the president, residents of California also voted on 20 statewide ballot measures. These included regulating the sale and use of poisons, creating the State Highway Finance Board, exempting property used for orphanages from taxation, and providing absentee voting for members of the military. While we’ve come a long way as a country, we still have a long way to go: Here are 16 ways women still aren’t equal to men.