The British monarch’s eating habits aren’t nearly as decadent as you had imagined! 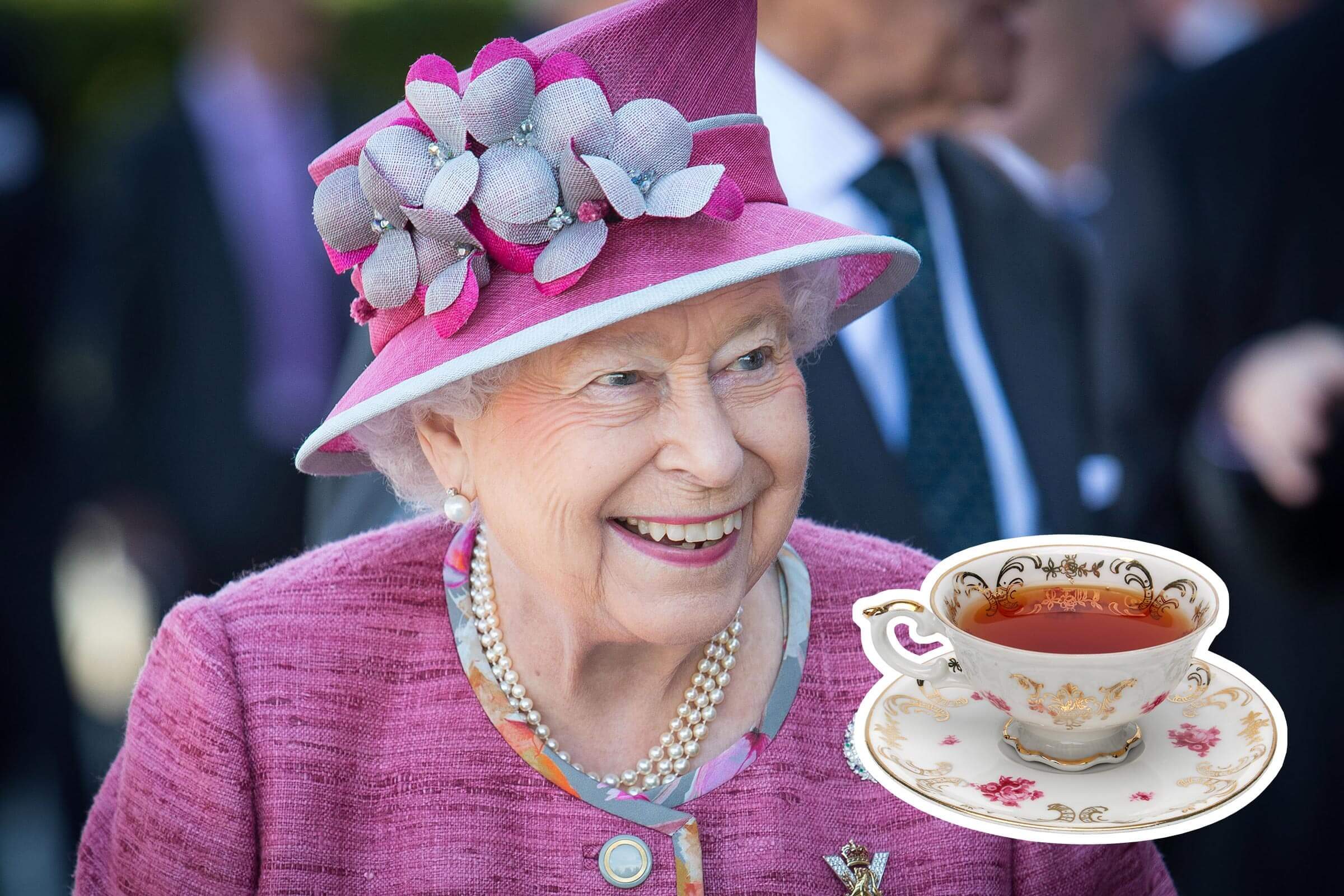 Queen Elizabeth II wouldn’t be very British without waking up to a piping hot pot of freshly brewed Earl Grey tea or Darjeeling with a spot of milk and no sugar, according to BT. Her morning tea is accompanied by a plate of biscuits before she sits down to eat breakfast. Here are the 15 British royal family travel secrets we bet your never knew. 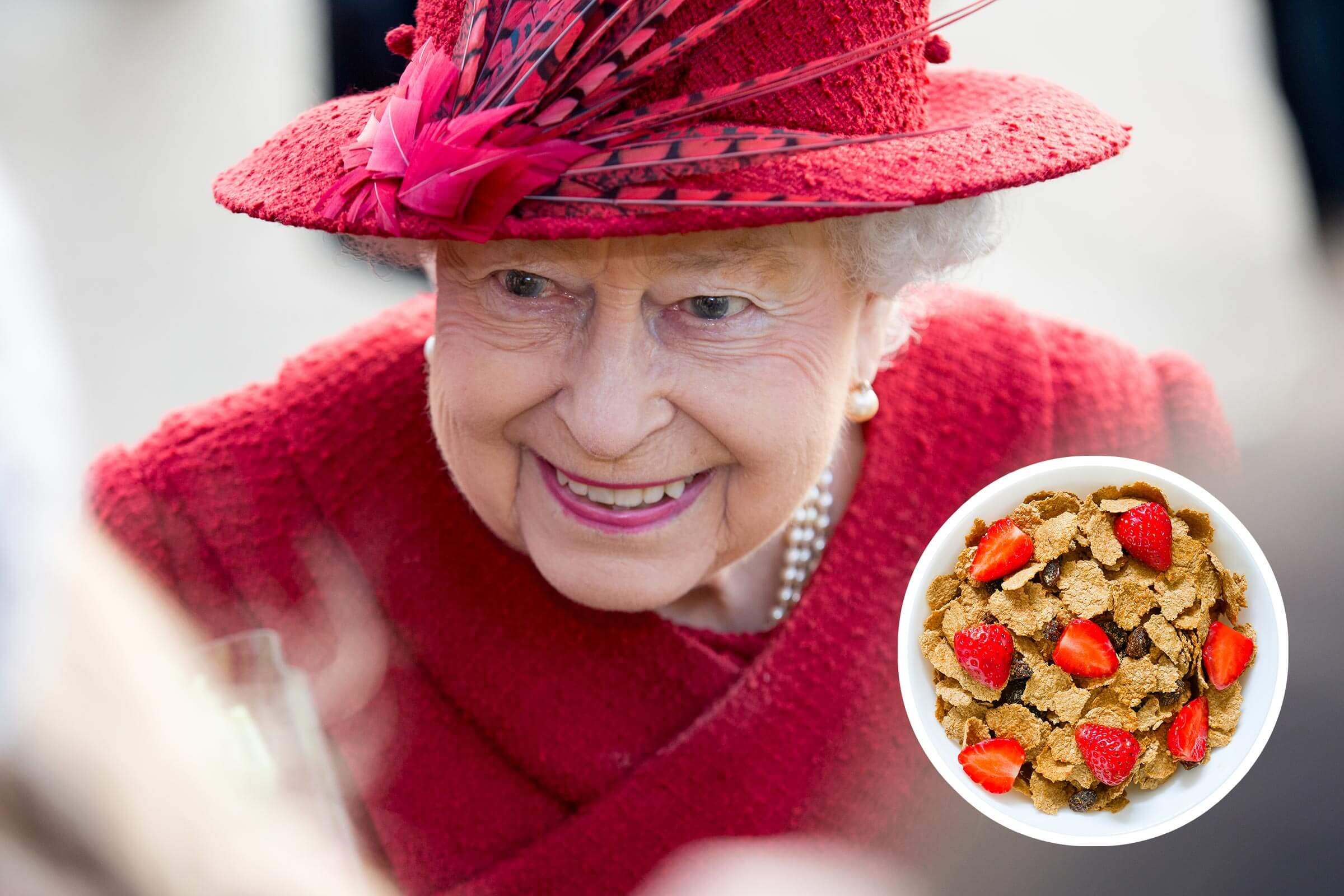 You may be surprised to find that Queen Elizabeth II enjoys a normal breakfast just like any other commoner—with a bowl of cereal. Her favorite brand is Special K. That’s right, the Queen gets her cereal from a cardboard box like the rest of us! And she eats her cereal out of a plastic container instead of the million-dollar jeweled bowl you probably envisioned. These are the most bizarre perks of being a member of the royal family. 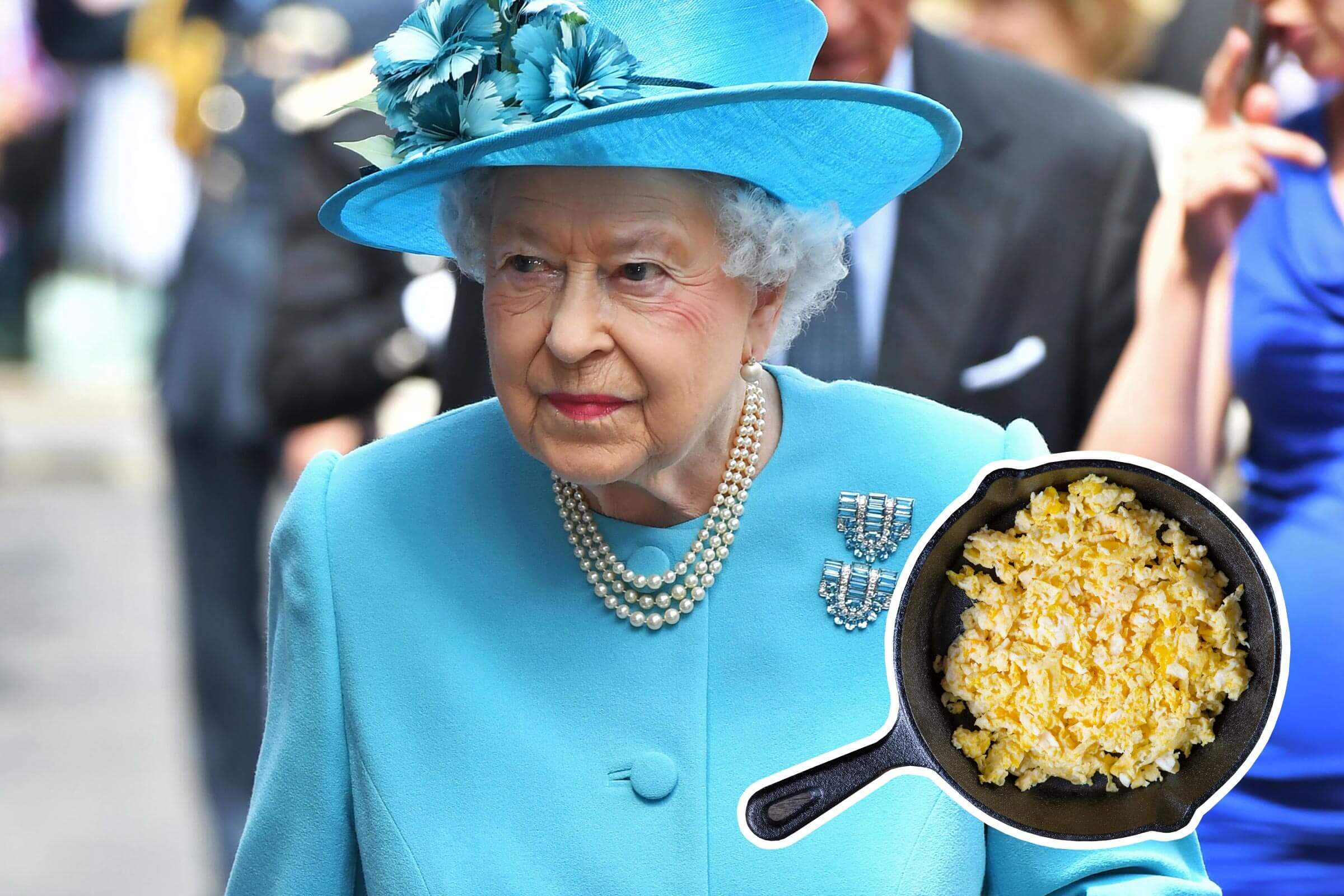 Sometimes, the Queen swaps out her morning cereal for a steaming hot plate of scrambled eggs, preferably brown eggs because she thinks they have a better flavor than white eggs. If she’s feeling a bit extravagant, she may ask for her eggs to be served with smoked salmon and a light grating of fresh truffle. But this added decadence is usually reserved for special occasions only. “She was too frugal to ever order fresh truffles,” Darren McGrady, a former chef for the royal family from 1982 to 1993, told the Telegraph. “She only really enjoyed them at Christmas when the truffles were sent as a gift.” Don’t miss these 9 other bizarre eating habits of the royal family. 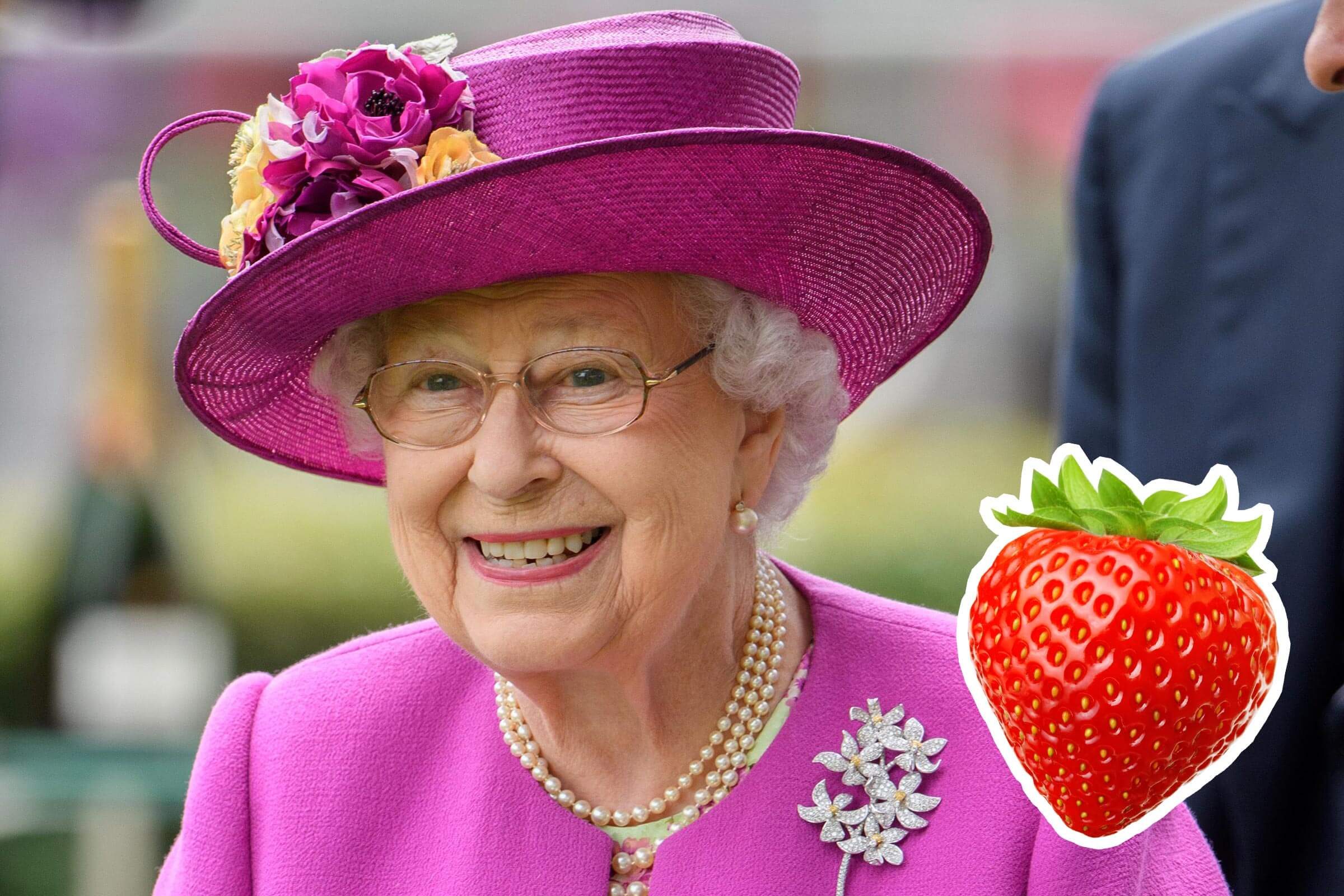 Queen Elizabeth ii didn’t become Britain’s longest reigning monarch eating fast food! In fact, she’s quite the health nut. She enjoys eating fresh fruit from her very own backyard. At Balmoral Castle, where she spends her summer holiday (aka “vacation” as it’s known across the pond) in Scotland, you’ll find bountiful raspberry, gooseberry, and strawberry bushes, while her countryside castle, Sandringham, sits on a whopping 70 acres of apples. Her favorite fruits are the strawberries from Balmoral Castle and her sweet white peaches from her greenhouses at Windsor Castle, according to the Telegraph. 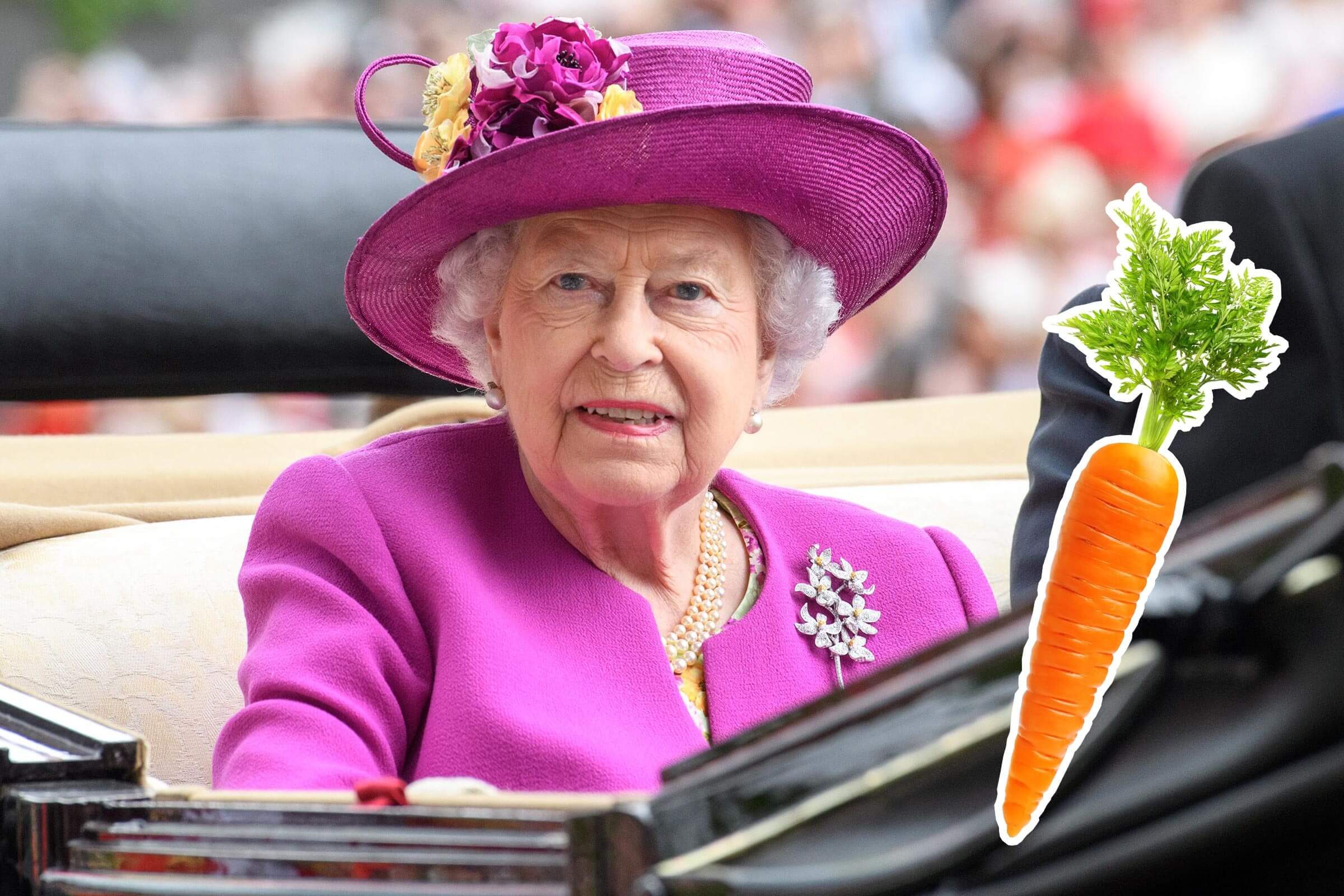 If she’s residing at Balmoral or Sandringham, the Queen may request a midmorning snack of carrots from the kitchen. But the vegetables are not for her, they’re for her horses! And there’s only one way you can prepare them. The carrots must be peeled, trimmed, and topped, sliced lengthwise and in half so each carrot is of equal length. “Don’t ever cut them any shorter than that,” the former head chef told McGrady in his book Eating Royally. “Or she will blame us when the horse bites her fingers!” Take a look at the 13 bizarre royal jobs that shockingly exist. 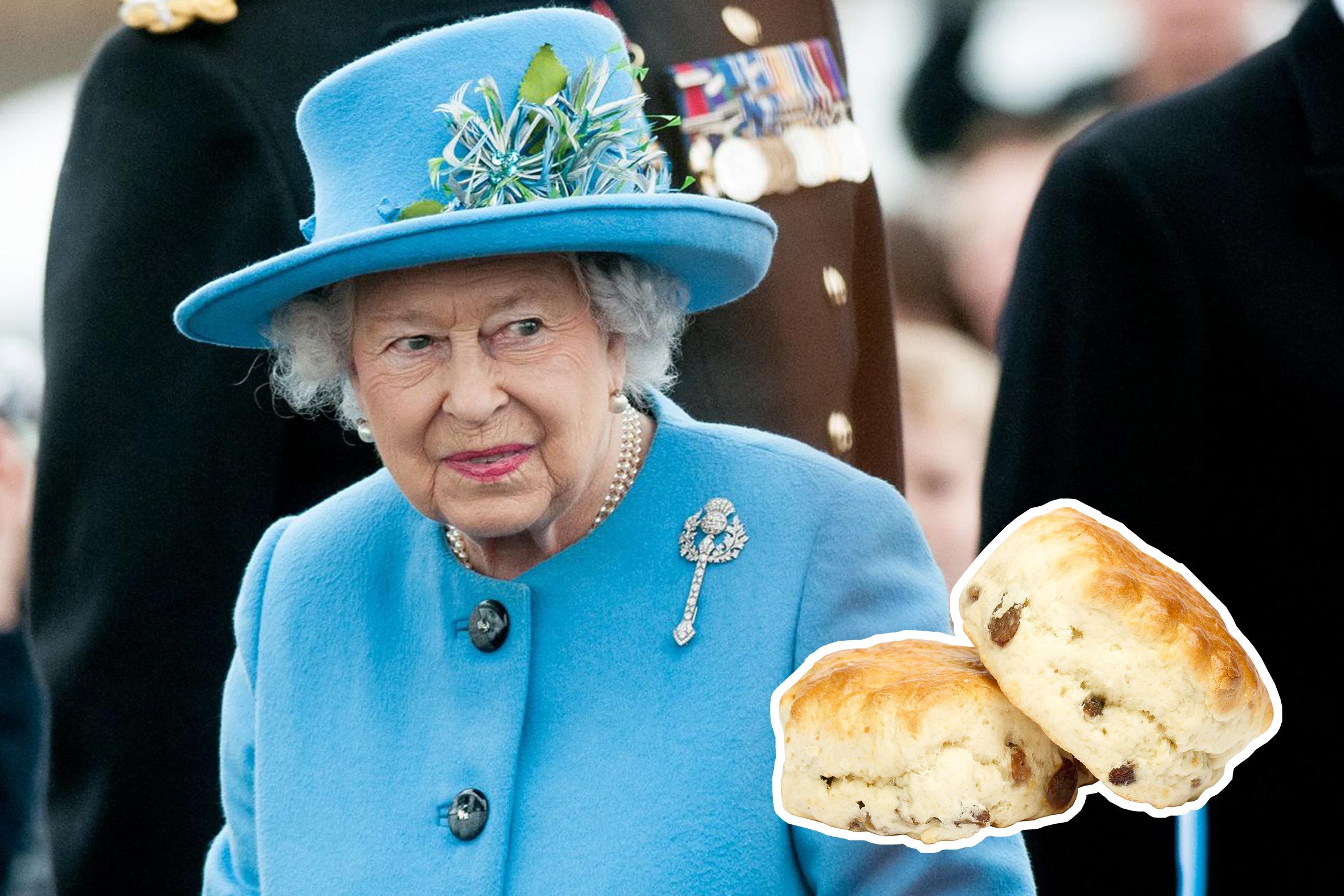 The Queen never takes her afternoon tea without a plate of freshly baked plain or fruit scones. Ironically, her afternoon tea is scheduled for 5 p.m., which is dinnertime for most of us! The Queen always insisted that the kitchen serve them with her tea, but McGrady suspects she may not actually like scones since she never ate them. “Instead, at the end of her daily tea, the Queen would take a scone and crumble it on the floor for the corgis,” he wrote in Eating Royally. “It seems the dogs quite liked them.” 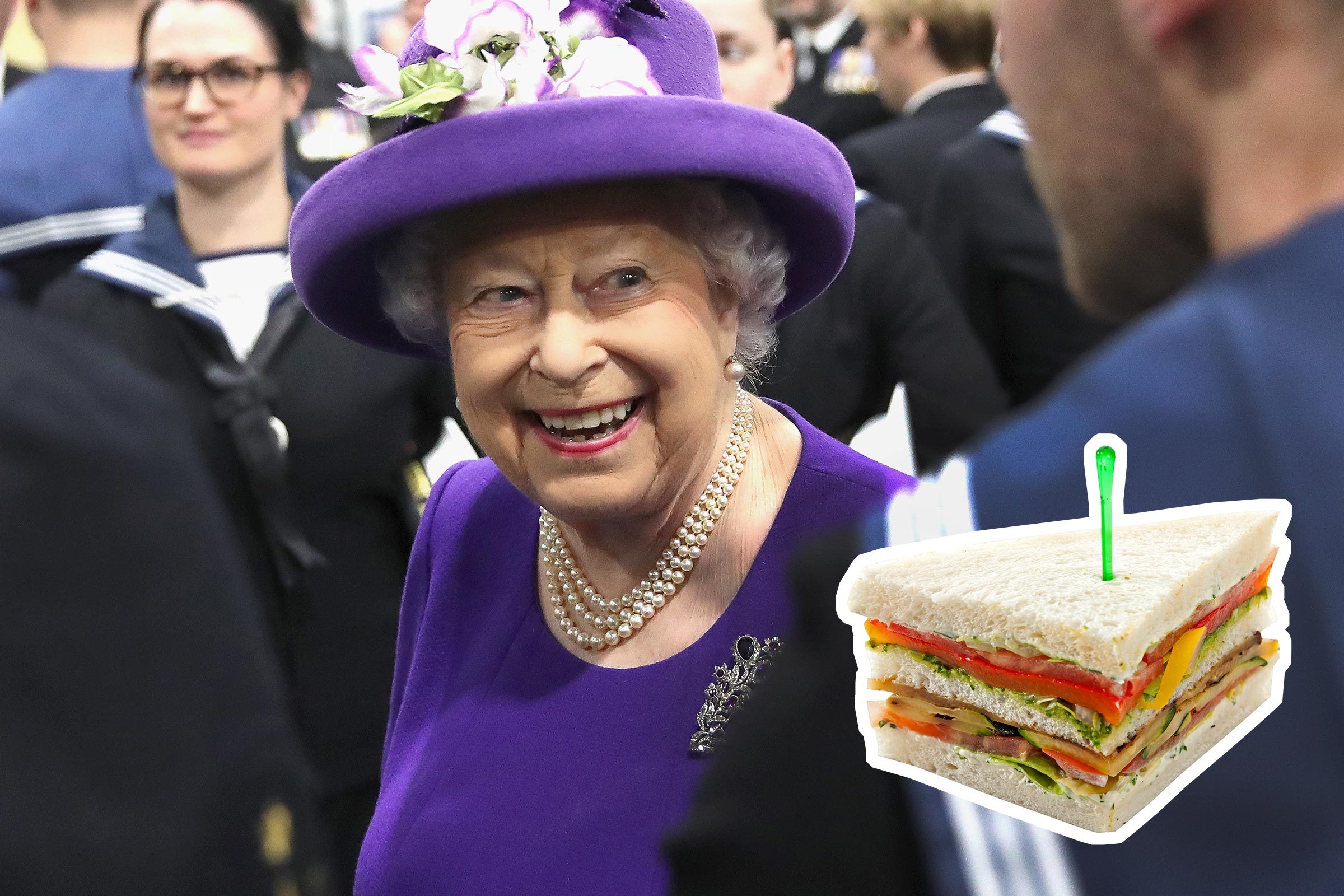 The Queen always asks for at least two kinds of sandwiches to go along with her afternoon tea. She has a vast selection to choose from: cucumber, smoked salmon, egg with mayonnaise, ham and mustard, or tuna. The bread is always either whole wheat or white bread, sliced thinly, and cut into squares with the corners cut off similar to an octagon-like shape. “I remember early on in my career I asked a fellow chef why it was necessary to trim corners off of tea sandwiches. I was told to never cut a square or a rectangle,” McGrady wrote in Eating Royally. “It looked too much like a coffin and it meant you wished the Queen ill.” He made sure to never make that mistake during his time working the royal kitchen! Check out your grocery store to see if you can find some of the royal family’s favorite food items. 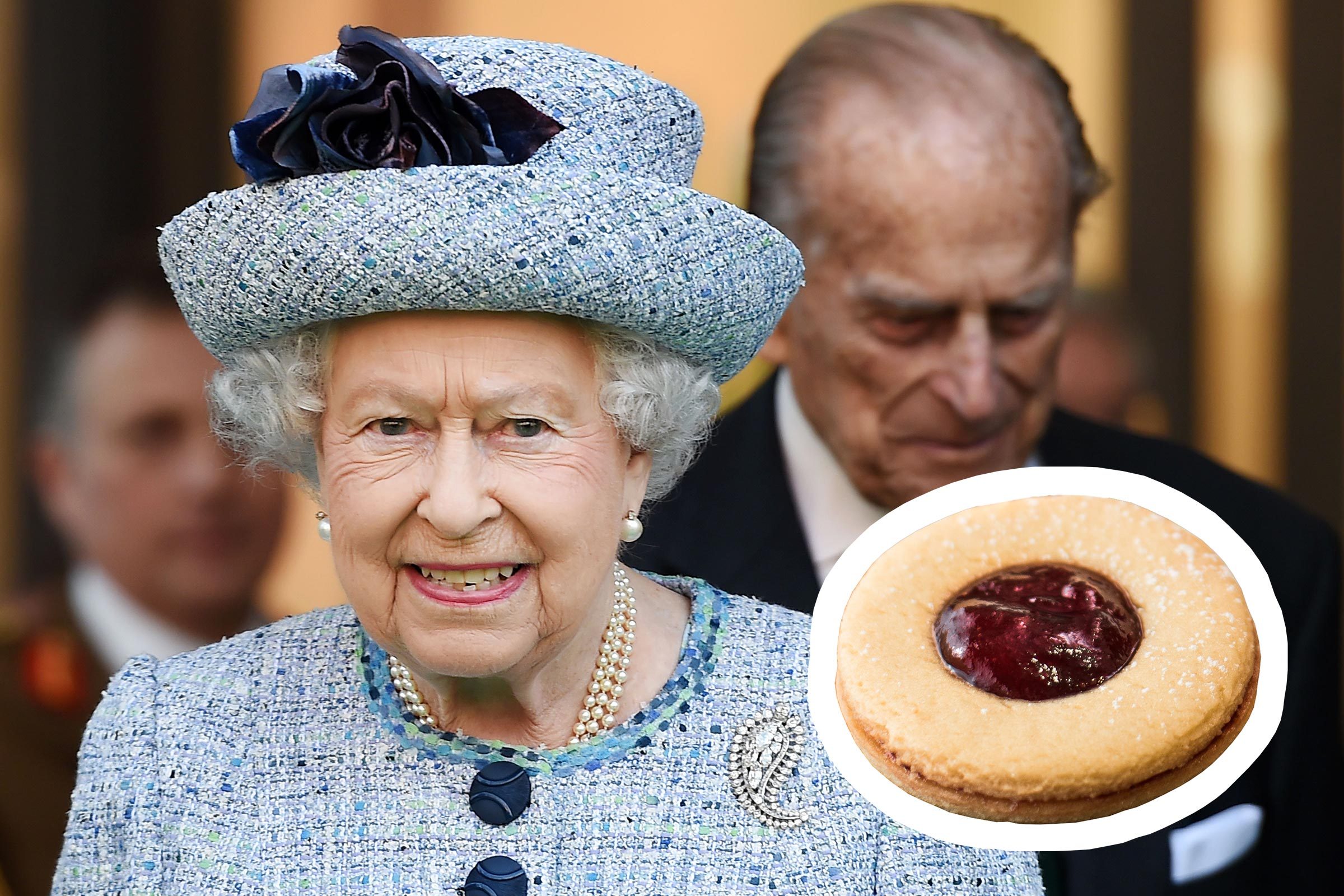 For a sweet treat at tea, she may ask for her childhood favorite – jam pennies, tiny raspberry jam sandwiches cut into small circles the size of an old English penny. She used to snack on them with her little sister Princess Margaret in the nursery as kids, according to the Telegraph. 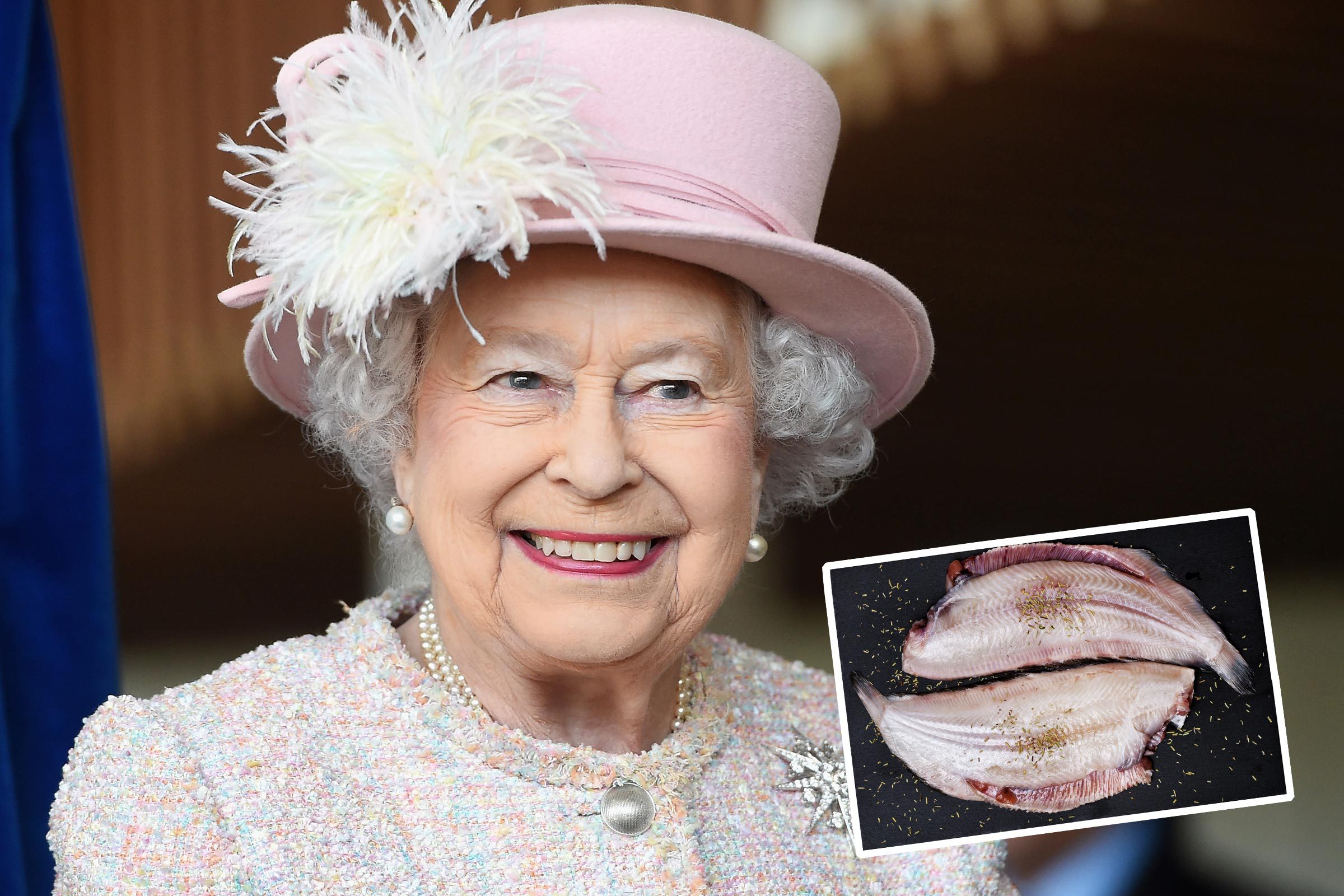 When she dines alone, Her Majesty likes to keep it light and simple with a plate of grilled fish and vegetables for lunch and dinner. According to McGrady, her favorite dish is grilled Dover sole with a side of wilted spinach or courgettes (what we call zucchinis across the pond). “That’s all she has. She’s very disciplined like that,” McGrady told CNN. “She could have anything she wanted, but it is that discipline that keeps her so well and so healthy.” These are the 9 foods Queen Elizabeth would never, ever eat. 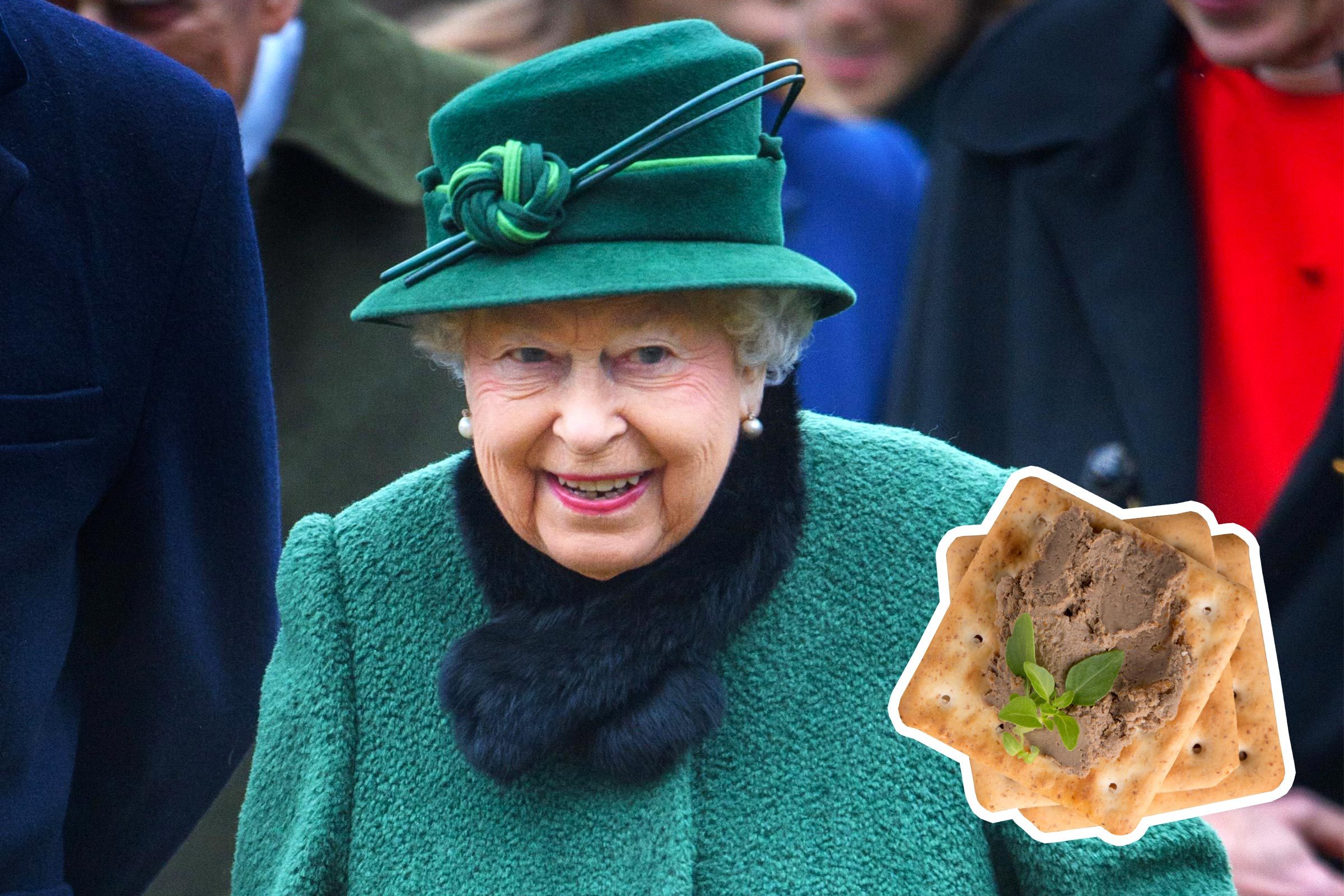 A popular first-course meal at Buckingham Palace is Gleneagles pâté, one of the Queen’s favorites for private meals. It’s a decadent combination of three pâtés: smoked salmon, smoked trout, and smoked mackerel, which are layered on smoked salmon fillets and sliced. The lavish dish is served with a side of Melba toast and horseradish crème fraîche, according to McGrady’s recipe from Eating Royally. 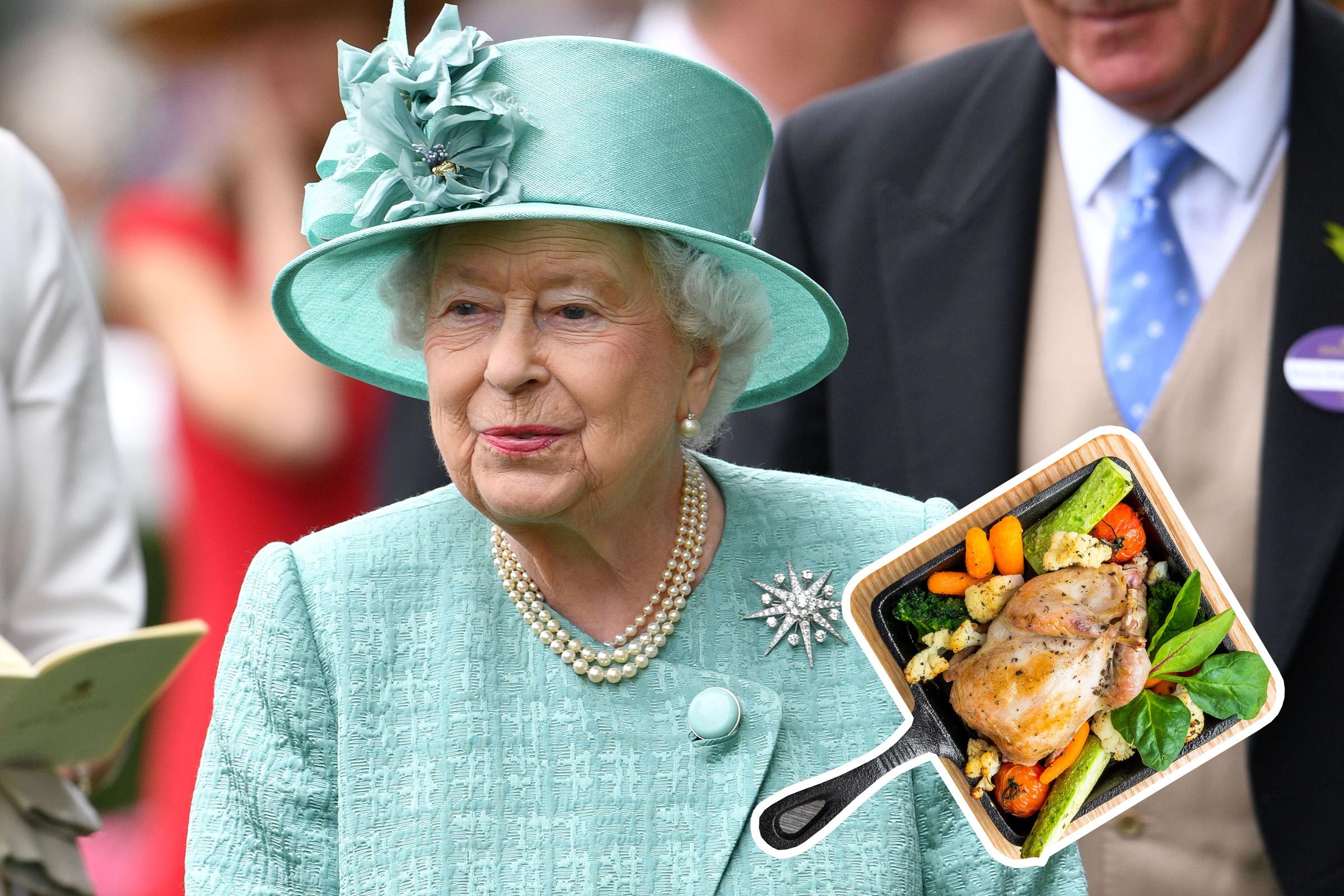 And of course, no week would be complete without a traditional British Sunday roast – a main meal of roasted meat, potatoes, and accompanied by Yorkshire pudding, stuffing, vegetables and gravy. Pheasant, grouse, partridge, beef, or venison, are just a few of the Queen’s favorite meats to splurge on for her Sunday roast. “The royals are devoted to game caught on the grounds,” writes McGrady in Eating Royally. But whatever you do, do not serve it to her rare! She likes her meats cooked all the way through. You’ll often see a well-done end slice of meat on her plate, according to the Telegraph. Next, read up on the unusual royal traditions you never knew existed. 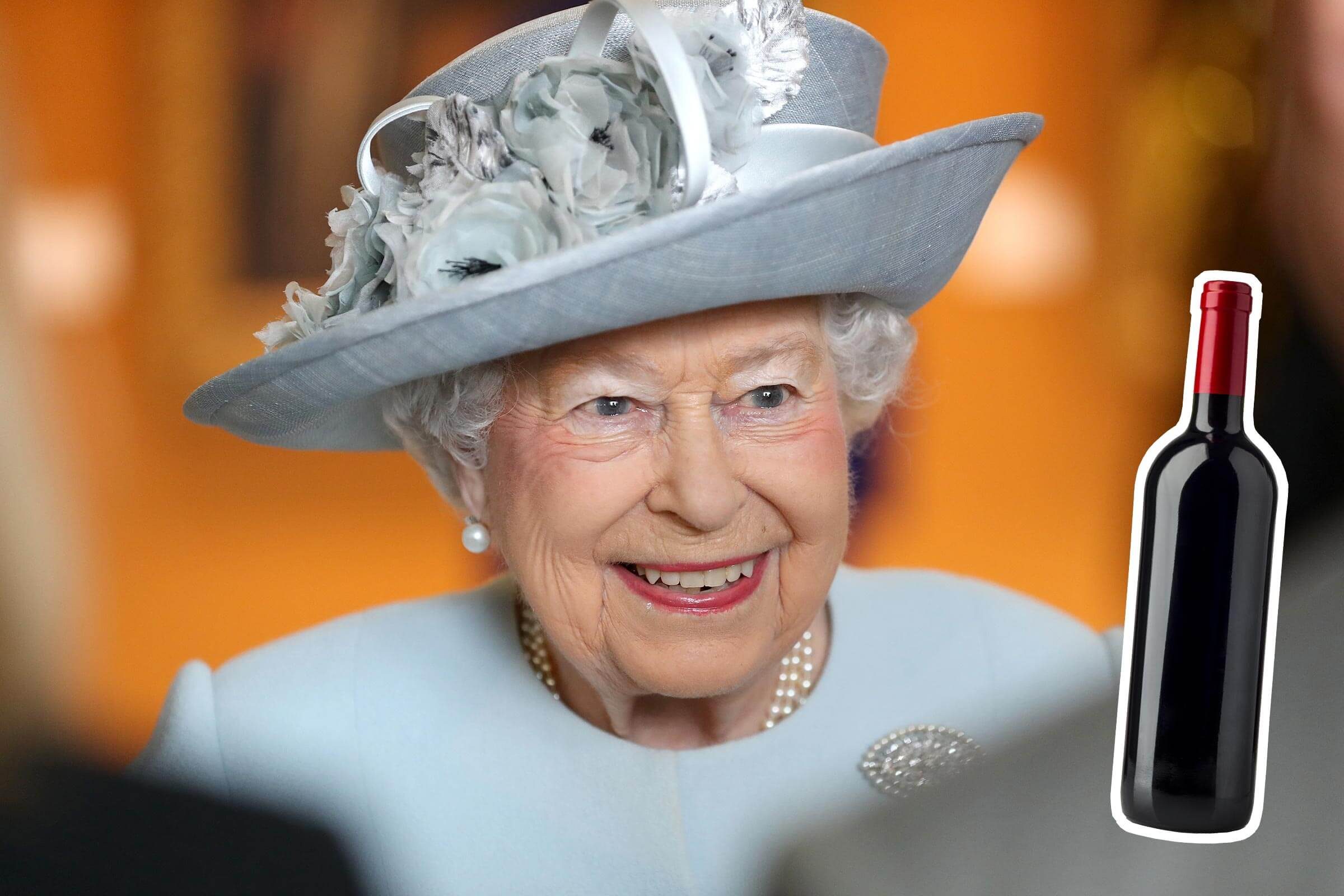 At 91 years old, the monarch still likes to imbibe on the occasional alcoholic beverage here and there. She usually sips on a glass of sweet German wine at dinner. But her favorite alcoholic beverage is a gin and Dubonnet (a sweet wine-based aperitif) with a slice of lemon and ice. “She doesn’t wake up in the morning and have an Elizabeth large gin and tonic,” McGrady told CNN. “Just in the evening sometimes. She certainly doesn’t drink four glasses a day.” 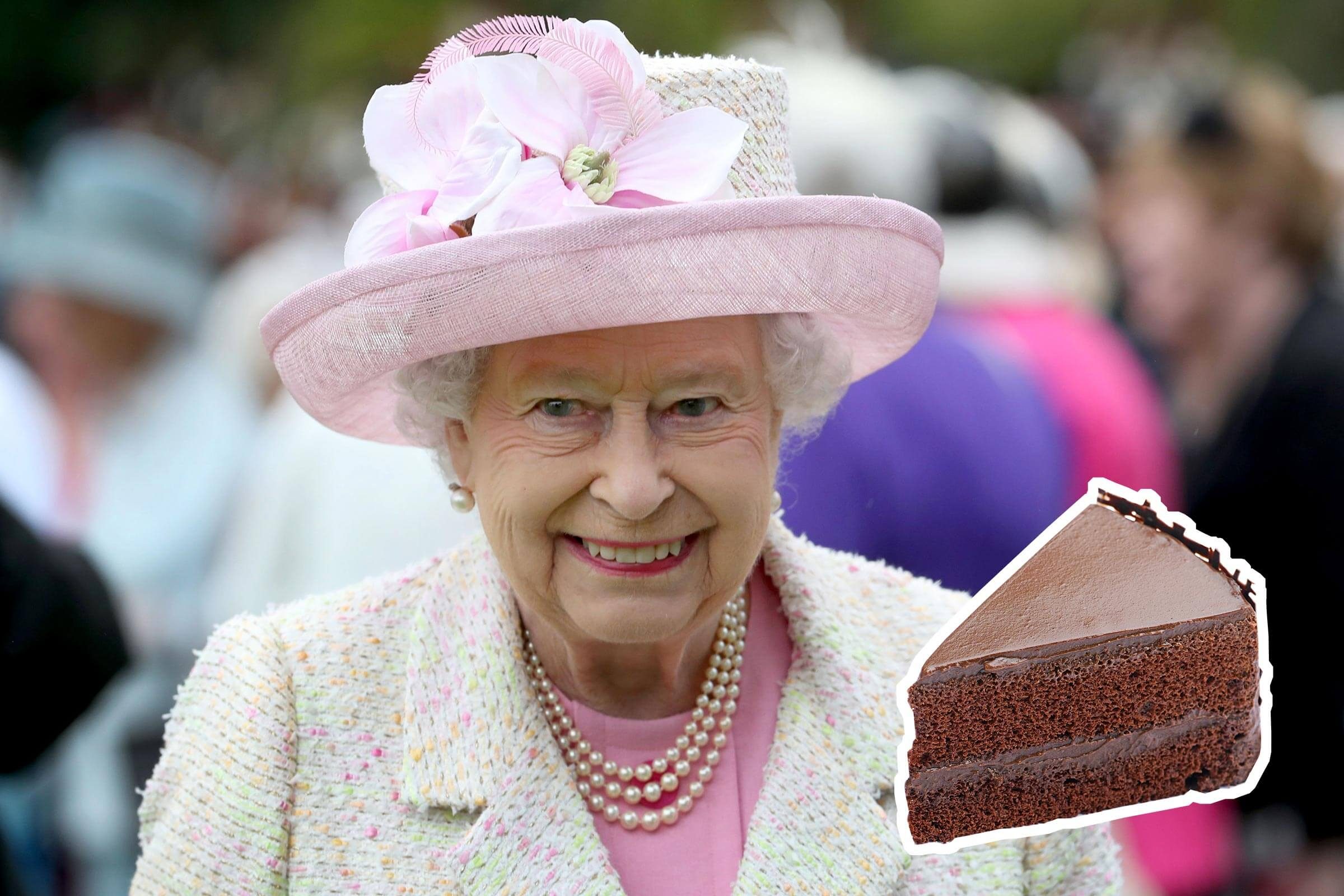 Despite her smart eating choices, Queen Elizabeth II does have quite the sweet tooth! A slice of chocolate cake is her guilty pleasure. The Queen will eat a slice at tea time again and again until not one crumb is left. “I have even packed half a cake into ‘Ascot boxes’ to send along with other provisions to Windsor Castle for the queen’s teas during the weekend,” McGrady wrote in Eating Royally. And she always orders her chefs to make her a chocolate ganache sponge cake for her birthday every year. According to the Telegraph, Queen Victoria’s chef concocted the recipe that has now been served at birthdays for the Queen and her family for years! “But it has to be dark chocolate, the darker the better,” McGrady told CNN. “She was never keen on milk chocolate or white chocolate.” Put your royals knowledge to the test and see if you can identify the British royal by their childhood picture.