13 of the Funniest Obituaries That Really Exist

There are going to be tears—might as well make them happy ones. 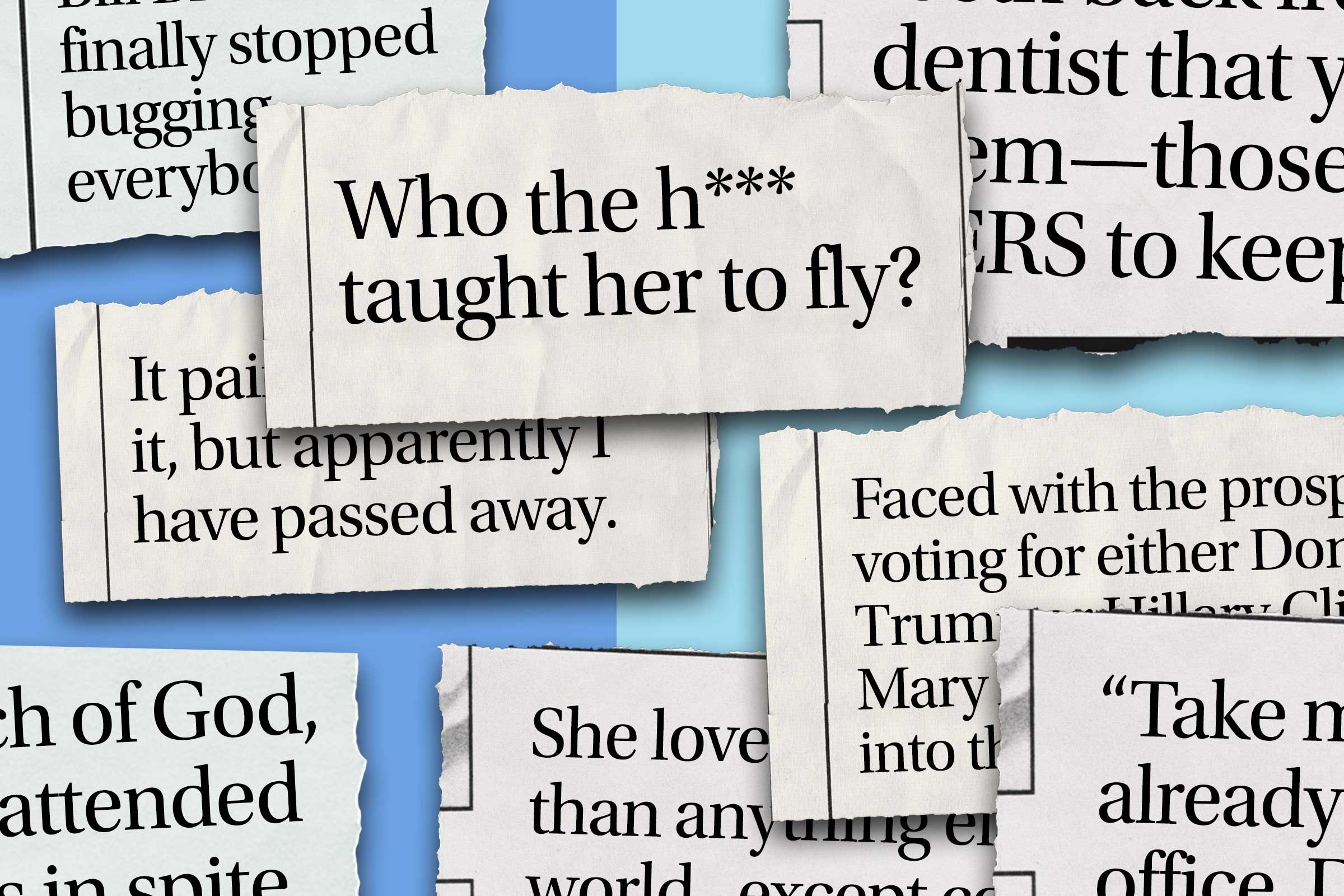 Gosh, people really do just stop in their tracks to be quietly amazed and entertained by the people they love, and then file that image away to later craft into funny obituaries and eulogies capable of bringing down the house. Some of these are so pithy they should be written in stone—and some of them were—to make the funniest tombstones that actually exist. 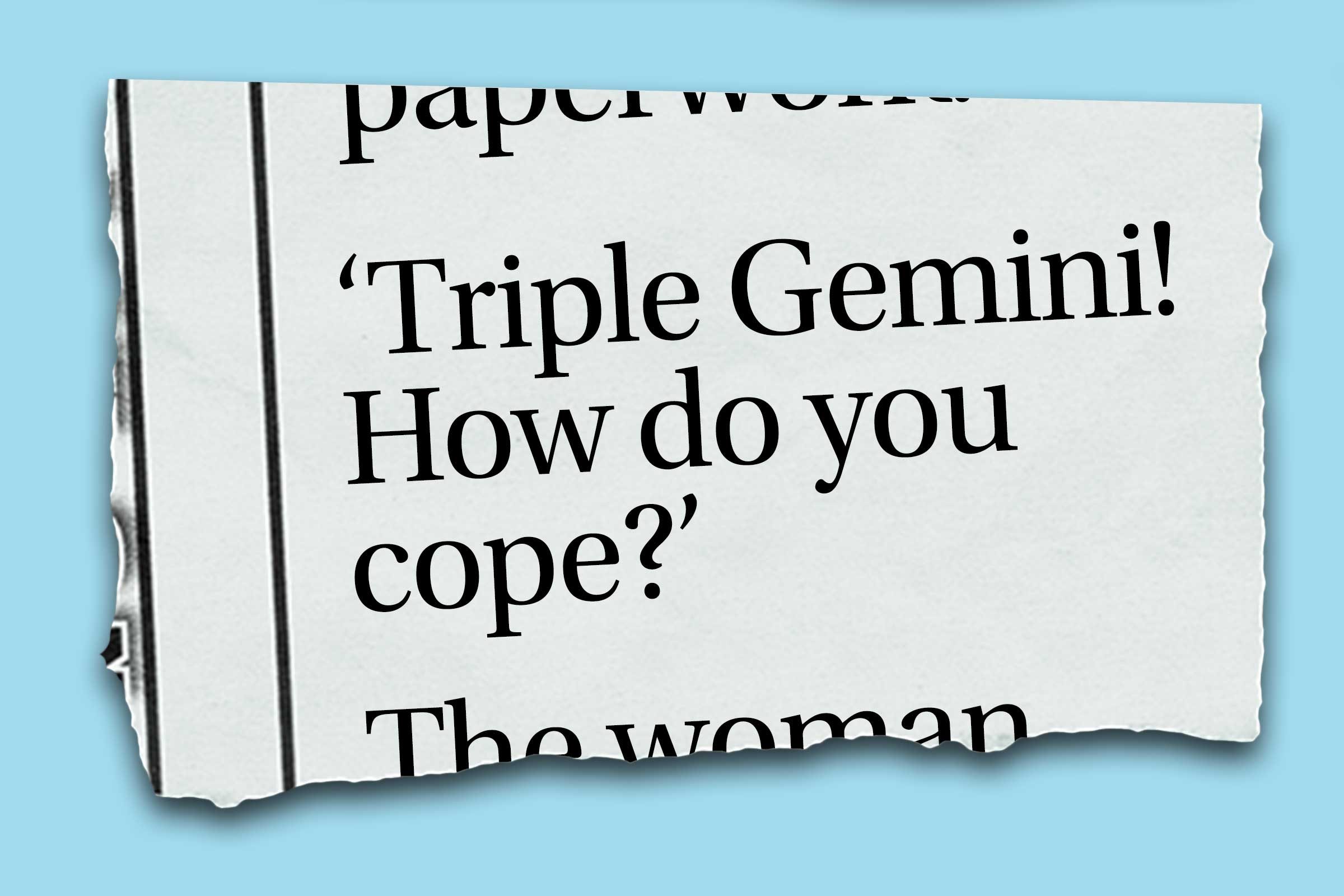 When longtime Rolling Stone editor Harriet Fier passed in 2018, an obituary the Washington Post chronicled her colorful and interesting life. It even included a brief anecdote about her unique Woodstock experience: “I spent the whole next morning picking up garbage because I felt bad about leaving a big mess.” However, the most entertaining part of her obituary is in reference to her landing at Rolling Stone: “As Ms. Fier told friends, she had no firm direction after college and might well have attended law school if she had not joined Rolling Stone, where getting a job in the early 1970s required little more than a certain alignment in the stars. Interview paperwork asked for an applicant’s sun, moon, and rising signs. ‘I didn’t know the difference, so I wrote Gemini on all three,’ Ms. Fier told Draper. Her answer was apparently good enough—although she startled the woman who took her form. ‘Triple Gemini!’ she shrieked. ‘How do you cope?’” Ms. Fier’s entire obituary is one as unique as they come. And in fact, another unique obituary is the reason a family treasure was found after a 152 mph tornado tore through the house. 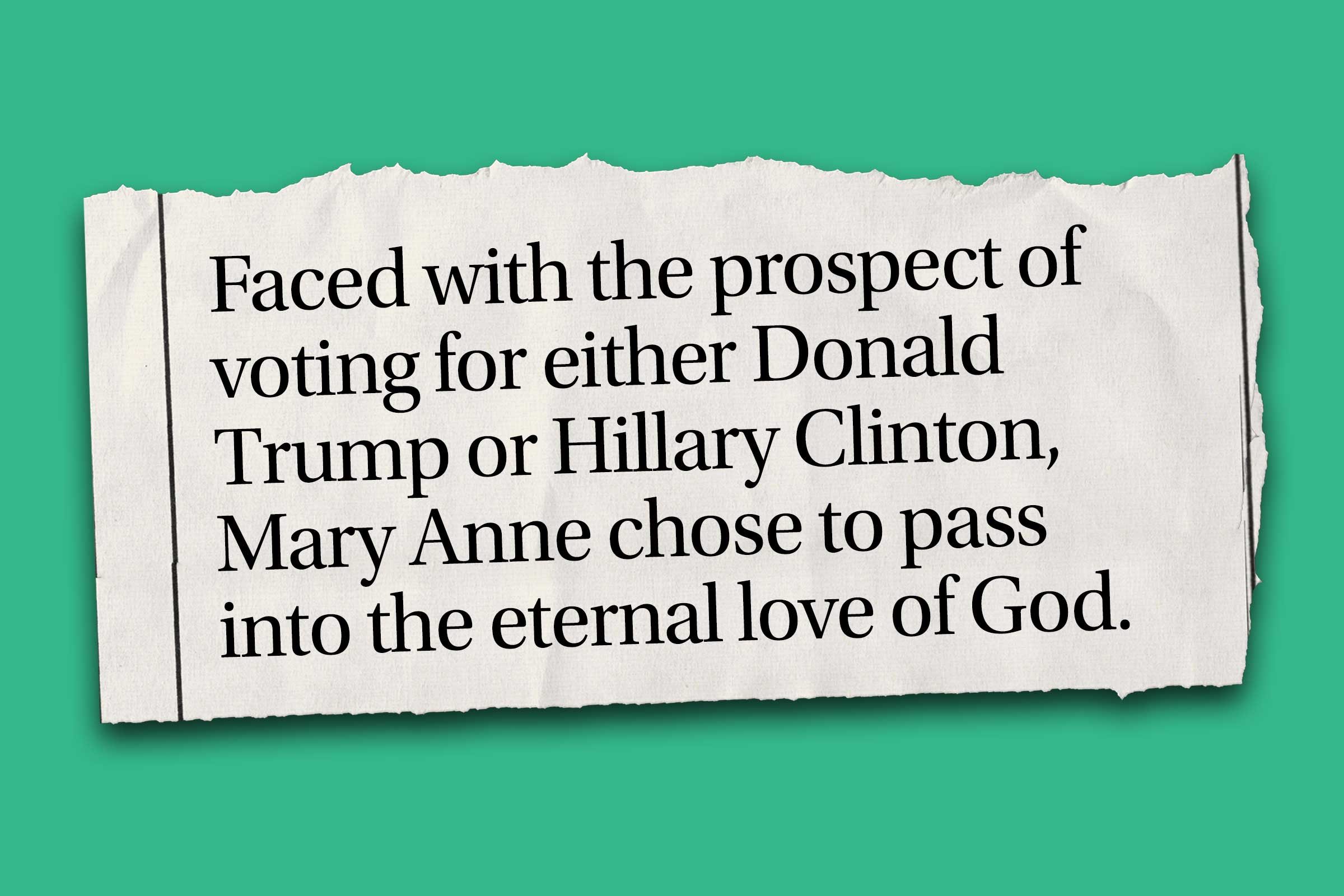 “Faced with the prospect of voting for either Donald Trump or Hillary Clinton, Mary Anne chose to pass into the eternal love of God.”

A regular Jane like me or you, Ms. Mary Anne Alfriend Noland passed just six months before the 2016 election, to which her obituary references an extreme aversion. She was born, raised, and now rests in Virginia—a swing state. 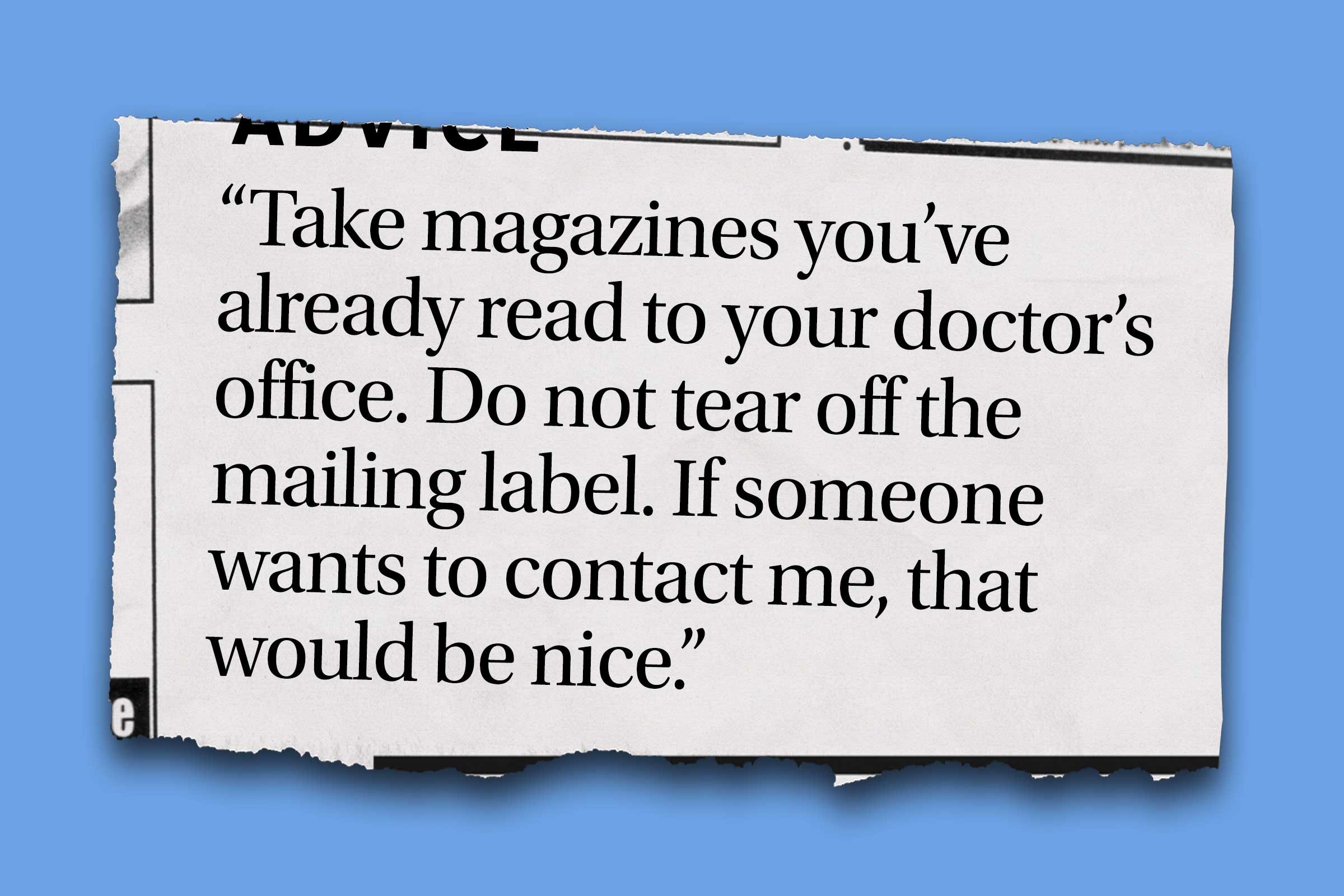 “Take magazines you’ve already read to your doctor’s office. Do not tear off the mailing label, ‘Because if someone wants to contact me, that would be nice.’”

This is less the funniest obituary you’ll ever read and more the sweetest obituary you’ll ever read. Mary “Pink” Mullaney’s obituary is chock-full of advice from both the most lovable and loving soul to grace God’s green Earth, apparently: “If a possum takes up residence in your shed, grab a barbecue brush to coax him out. If he doesn’t leave, brush him for 20 minutes and let him stay. Go to church with a chicken sandwich in your purse. Give the chicken sandwich to a homeless friend after mass. Go to a nursing home and kiss everyone. Put picky-eating children at the bottom of the laundry shoot, tell them they are hungry lions in a cage, and feed them veggies through the slats.” Put Pink up there with people like John Lennon and Michael Jordan whose life lessons you can’t live without. 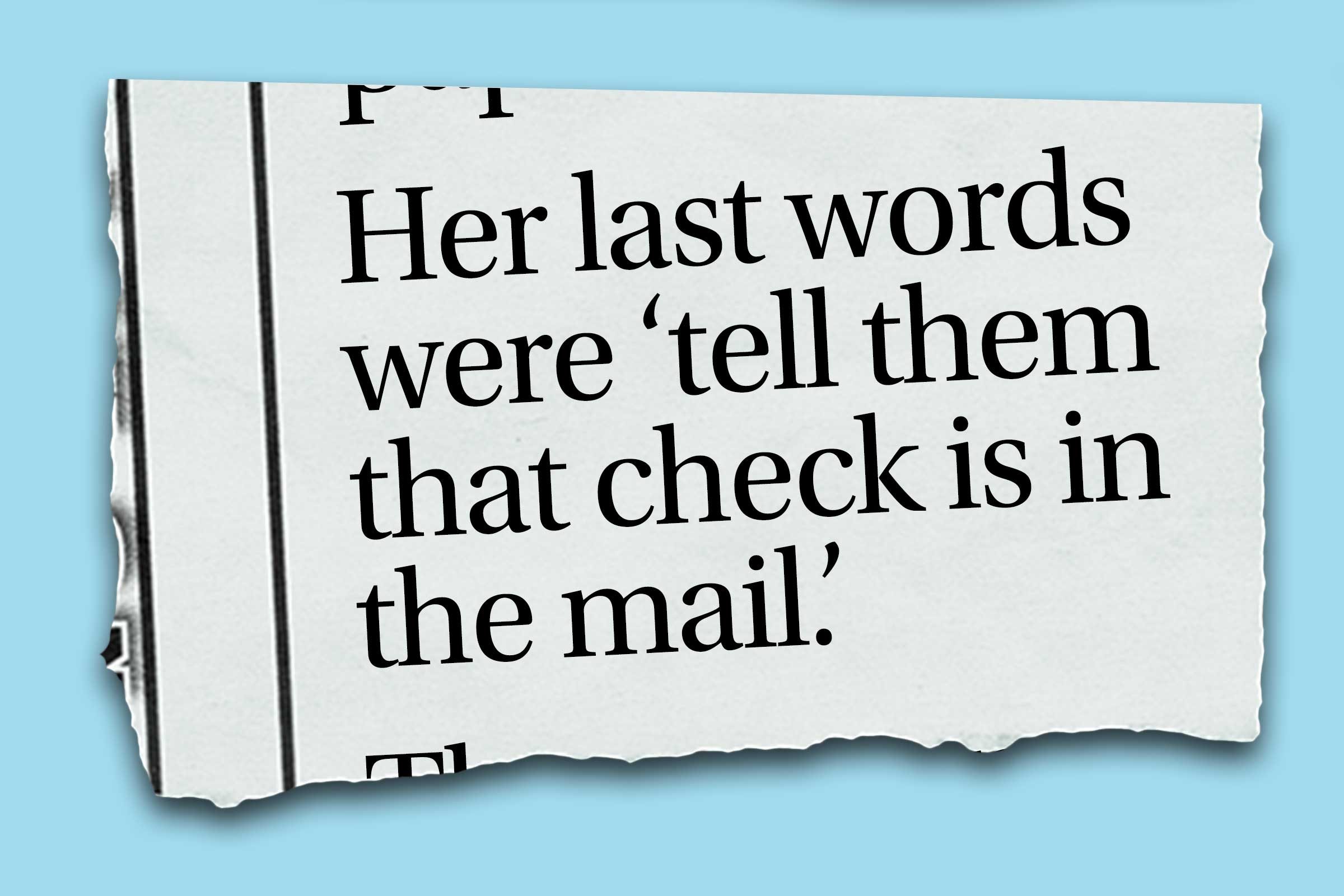 “Her last words were ‘tell them that check is in the mail.’”

Jean Larroux III and Hayden Hoffman decided to honor their mother, notable Waffle House patron (and library fine-avoider) Antonia “Toni” Larroux of Bay St. Louis, Mississippi, with an obituary that reads like a standup set. “We started to write a normal [obituary],” Larroux III told HuffPost, before realizing “mom would be so ashamed.” Some of its greatest hits include, “She conquered polio as a child, contributing to the nickname ‘polio legs,’ given by her ex-husband. It should not be difficult to imagine the reasons for their divorce 35+ years ago,” and, “She considered Aaron Burrell a distant grandson (not distant enough).” However, the siblings rounded out the seemingly blithe memorial with a rather moving annotation: “On a last but serious note, the woman who loved her life and taught her children to ‘laugh at the days to come’ is now safely in the arms of Jesus and dancing at the wedding feast of the Lamb. Anyone wearing black will not be admitted to the memorial. She is not dead. She is alive.” Who is cutting onions in here? Toni’s obituary went viral, for the same reason people couldn’t stop sharing this sweet 91-year-old’s obituary. 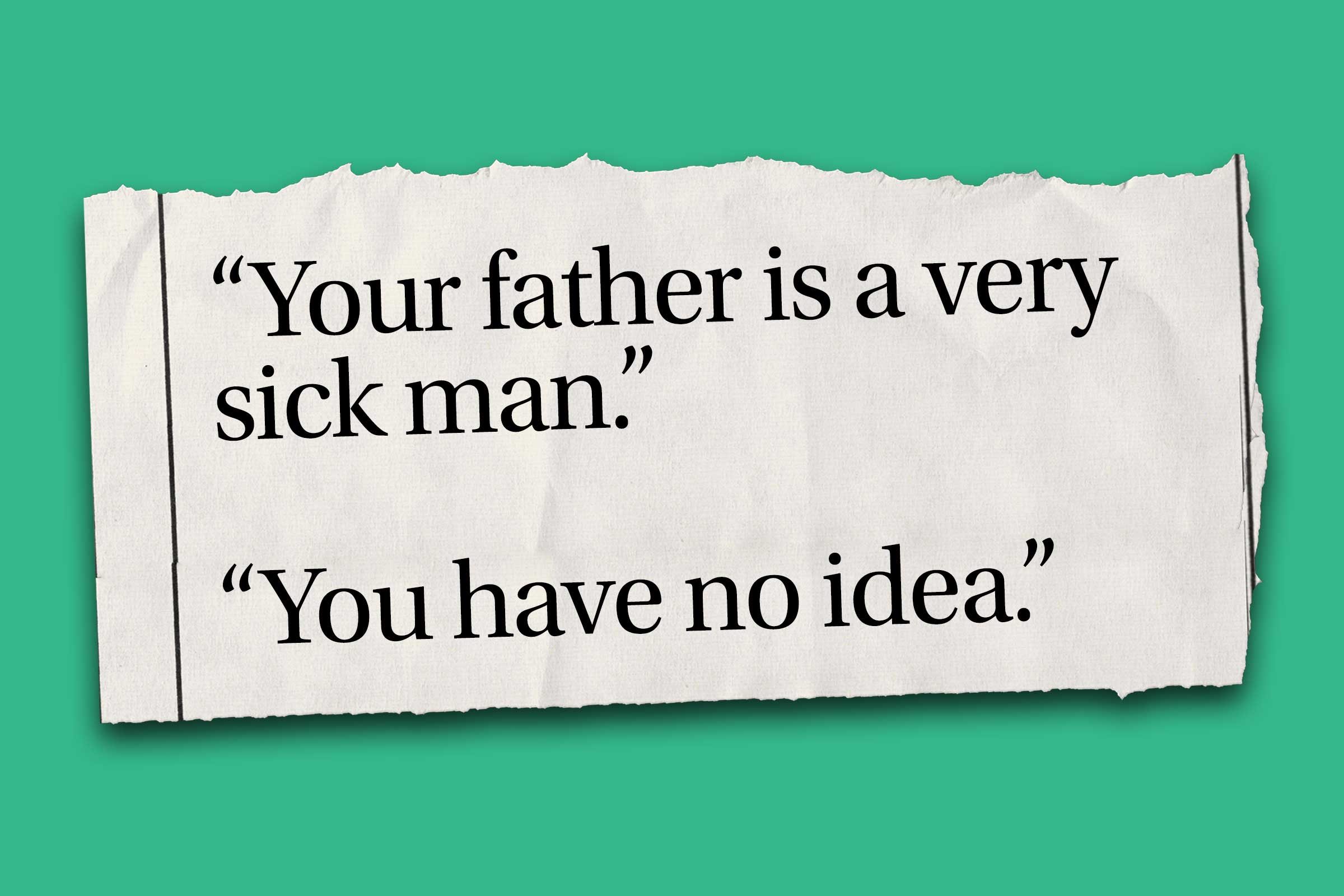 There is no better legacy than a laugh—and Joe Heller and his daughters all know it. The recently deceased Heller was born in New Haven, Connecticut, after which, his daughters note, “God thankfully broke the mold.” The daughters go on to profile the lifelong jester: “His mother was not immune to his pranks as he named his first dog ‘Fart’ so she would have to scream his name to come home. … The family encourages you to don the most inappropriate t-shirt that you are comfortable being seen in public with, as Joe often did.” If you thought these quips were good, just check out these funny road signs worth slowing down for. 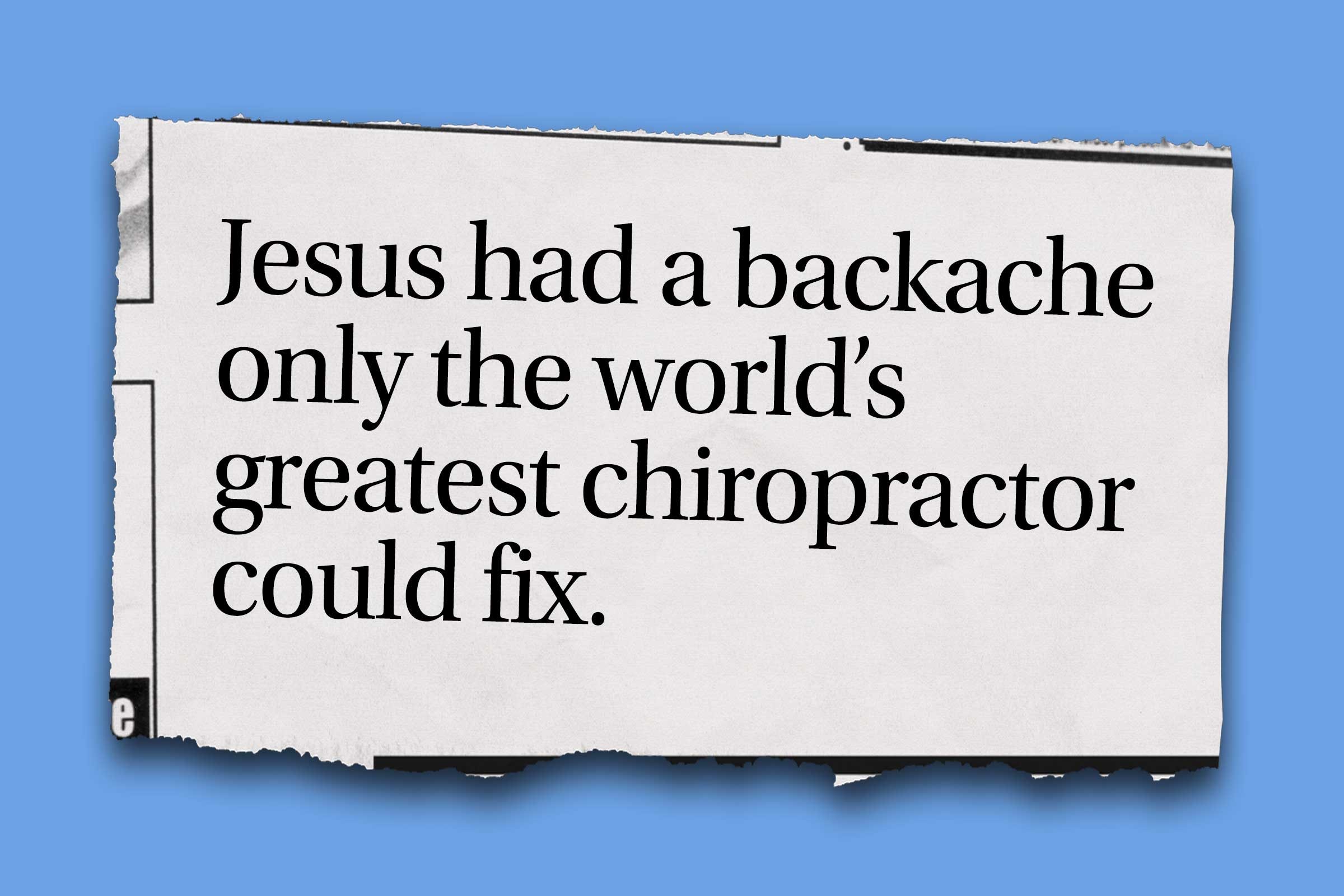 “Jesus had a backache only the world’s greatest chiropractor could fix.”

Well, it appears Jesus had what could only be described as an unholy kink in his back, and Dr. Mark Flanagan was there to make a house call. Not only was Dr. Flanagan described as the “world’s greatest chiropractor,” but he also had “more dolphin paraphernalia than a gift shop at one of those places with actual dolphins.” As far as sweet remembrances go, this five-year-old who died from cancer and wrote his own unforgettable obituary takes the cake. 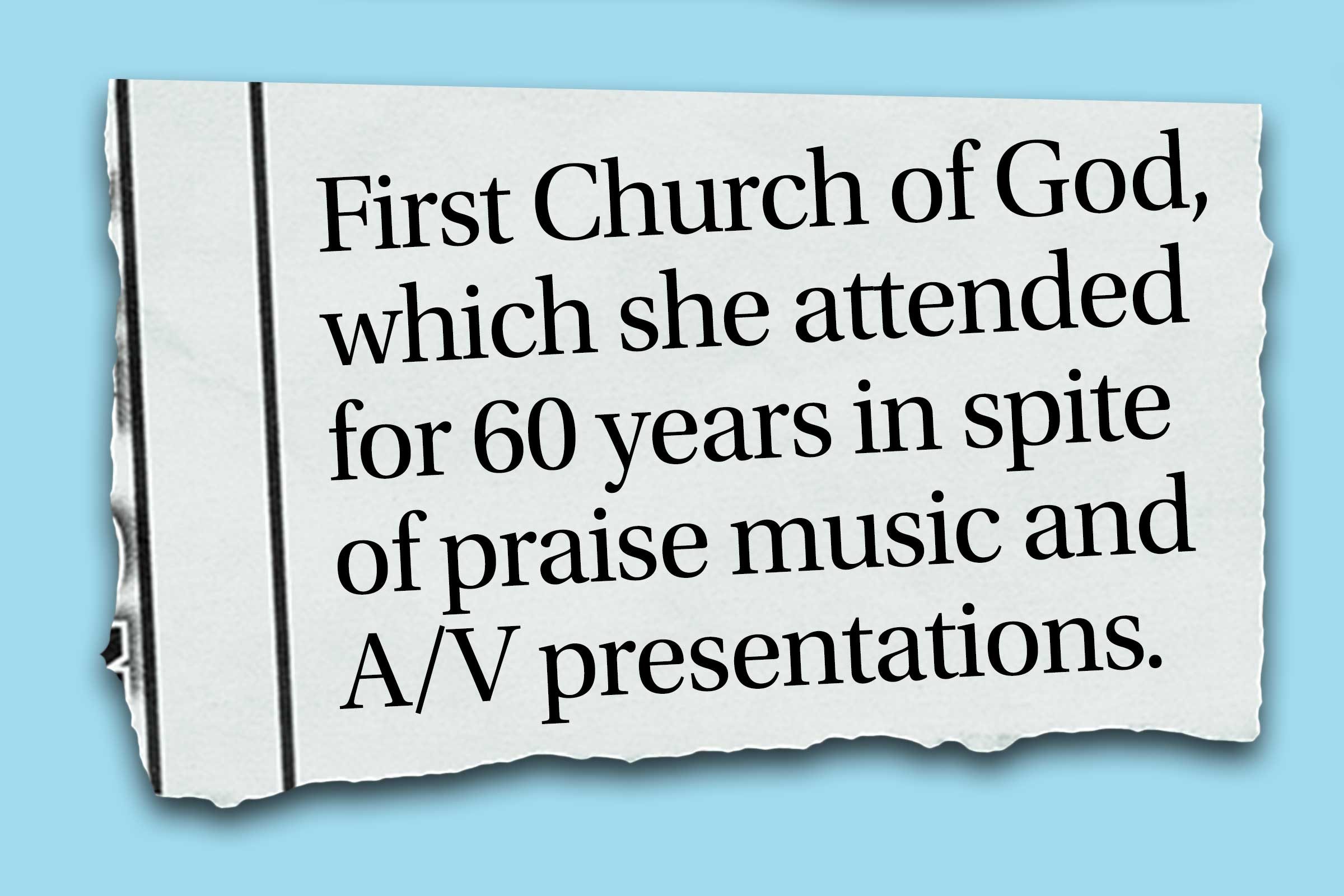 “First Church of God, which she attended for 60 years in spite of praise music and A/V presentations.”

Betty Jo Passmore of Tampa Bay passed away in 2014, and her obituary recounts her love of her family, mystery novels, and dark chocolate—and her absolute ire for praise music and A/V presentations. That Ms. Passmore used her final stamp on this earthly world to drag out a lifelong beef just a little longer is hilarious and iconic. Petition to add this to the list of famous last words spoken by iconic people. 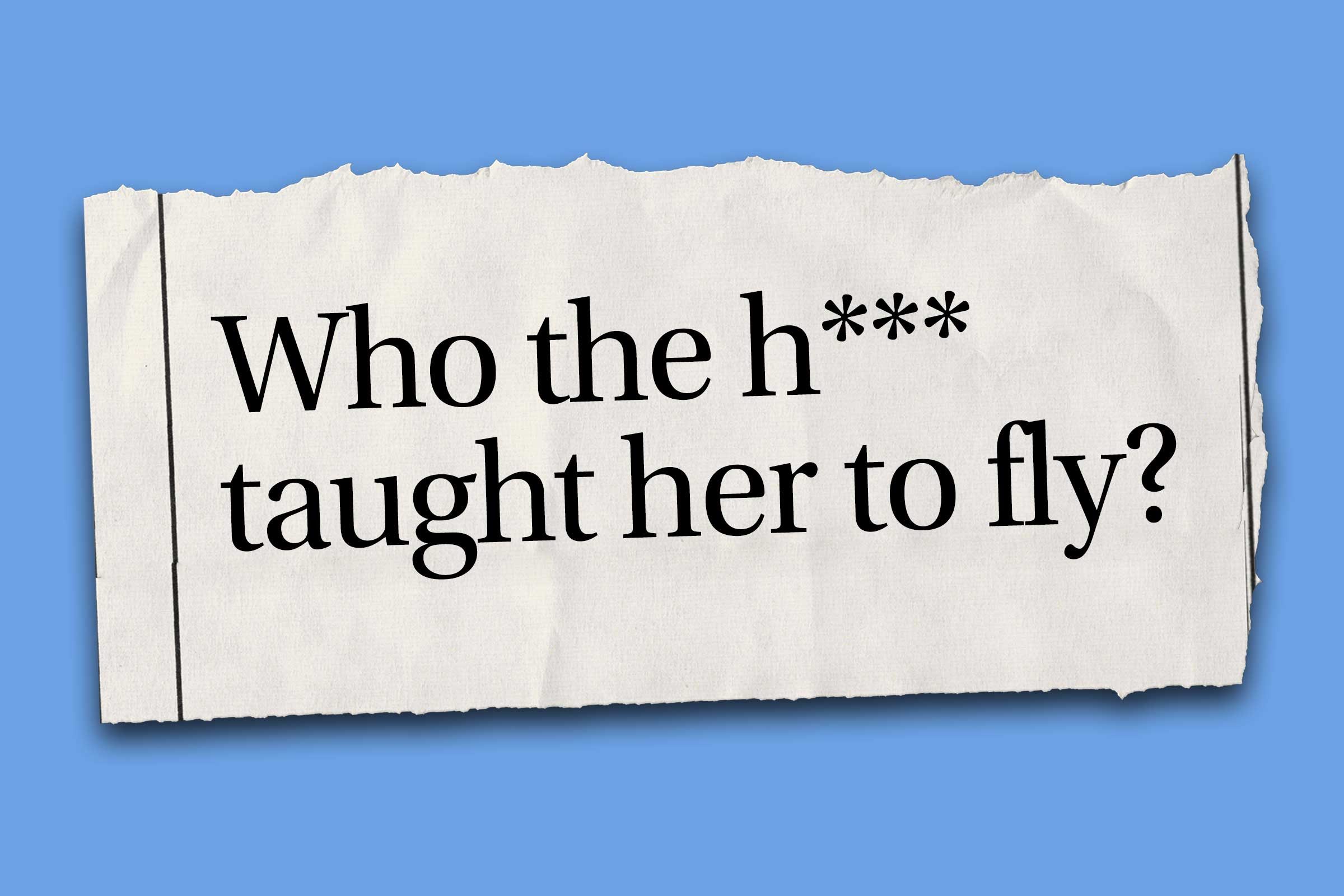 Lois Ann Harry’s obituary exposes her as a riddle, wrapped in a mystery, inside an enigma. Originally from Idaho Falls—or is she?—Harry’s last confirmed sighting reports her departure from the Homestead wearing dark glasses and an ushanka. “Authorities are baffled by the disappearance of the 88-year-old woman, how she gained access to the aircraft, and who the h*** taught her how to fly,” the obituary reads. Even more baffling are her children’s contradictory assertions of her life: some swear she’s a pastry chef and freelance food critic, a professional gambler and race car driver, a square dancer, a botanist who ran a chain of recreational marijuana dispensaries in Washington state, and more. Ever a woman of mystery, she “loved her life, family, and friends but would prefer that you not follow her to Bermuda.” Add this to this list of quintessential uplifting quotes that stays with you. 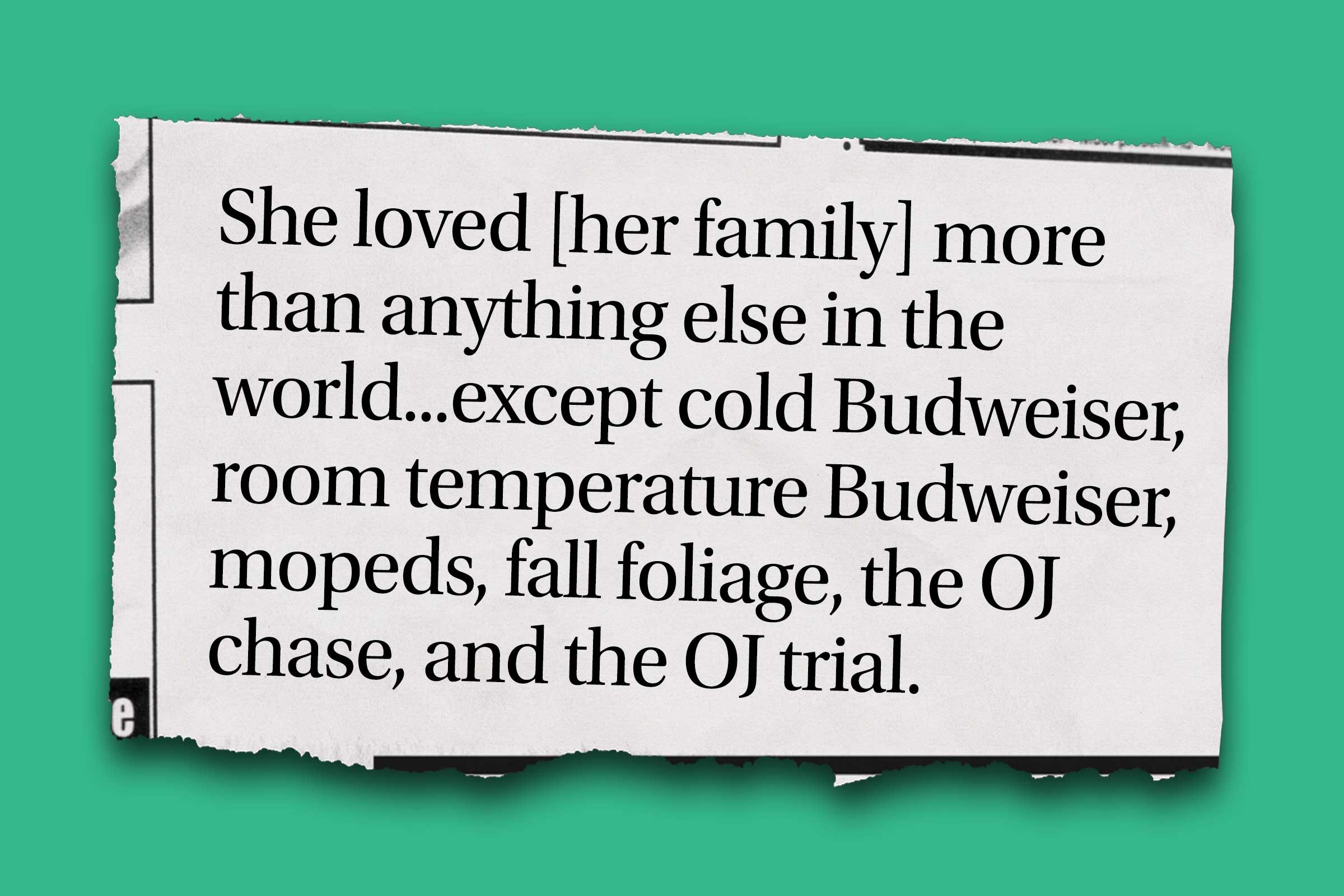 “She loved [her family] more than anything else in the world…except cold Budweiser, room temperature Budweiser, mopeds, fall foliage, the OJ chase, and the OJ trial.”

Jan Lois Lynch of Boston, Massachusetts was a woman of eclectic interests and sublime taste. Her aforementioned life’s loves sounds like all the ingredients of an ideal Thursday afternoon. Plus, Ms. Lynch’s sons note, “Dangling her feet over a 5,000-foot cliff at the edge of the Grand Canyon so she could ‘see what it felt like to feel the fear,’ taught us all the really good things in life are beyond the ‘Do Not Enter’ signs.” This is a woman after my own heart. You know Jan wouldn’t have backed down from visiting one of the creepiest (but real!) ghost towns on Earth. 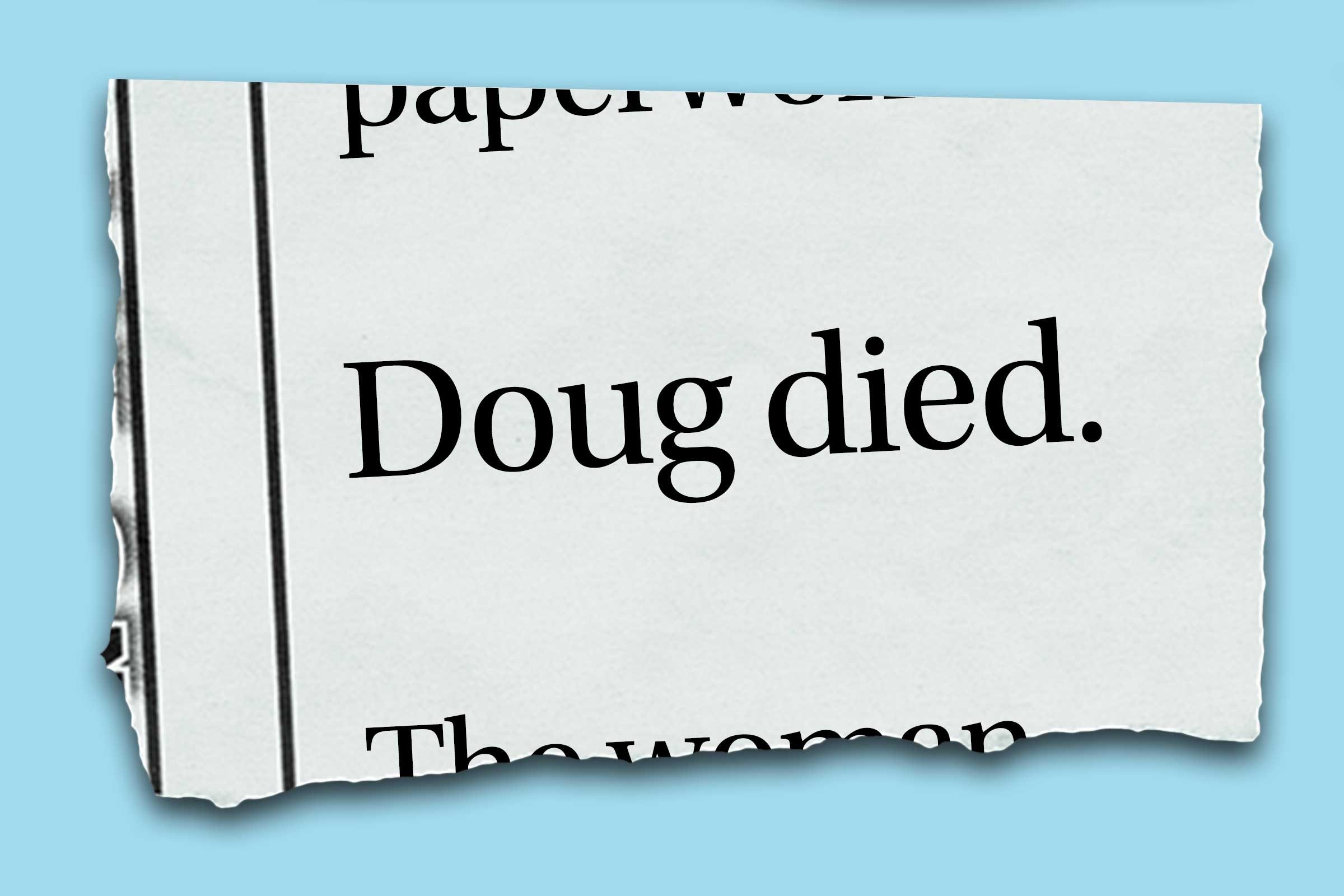 Douglas Legler of Fargo, North Dakota passed away in June 2015, but not before penning his own obituary, a testament to the adage “brevity is the soul of wit.” If dark humor like this is your thing, science says you might be a genius. 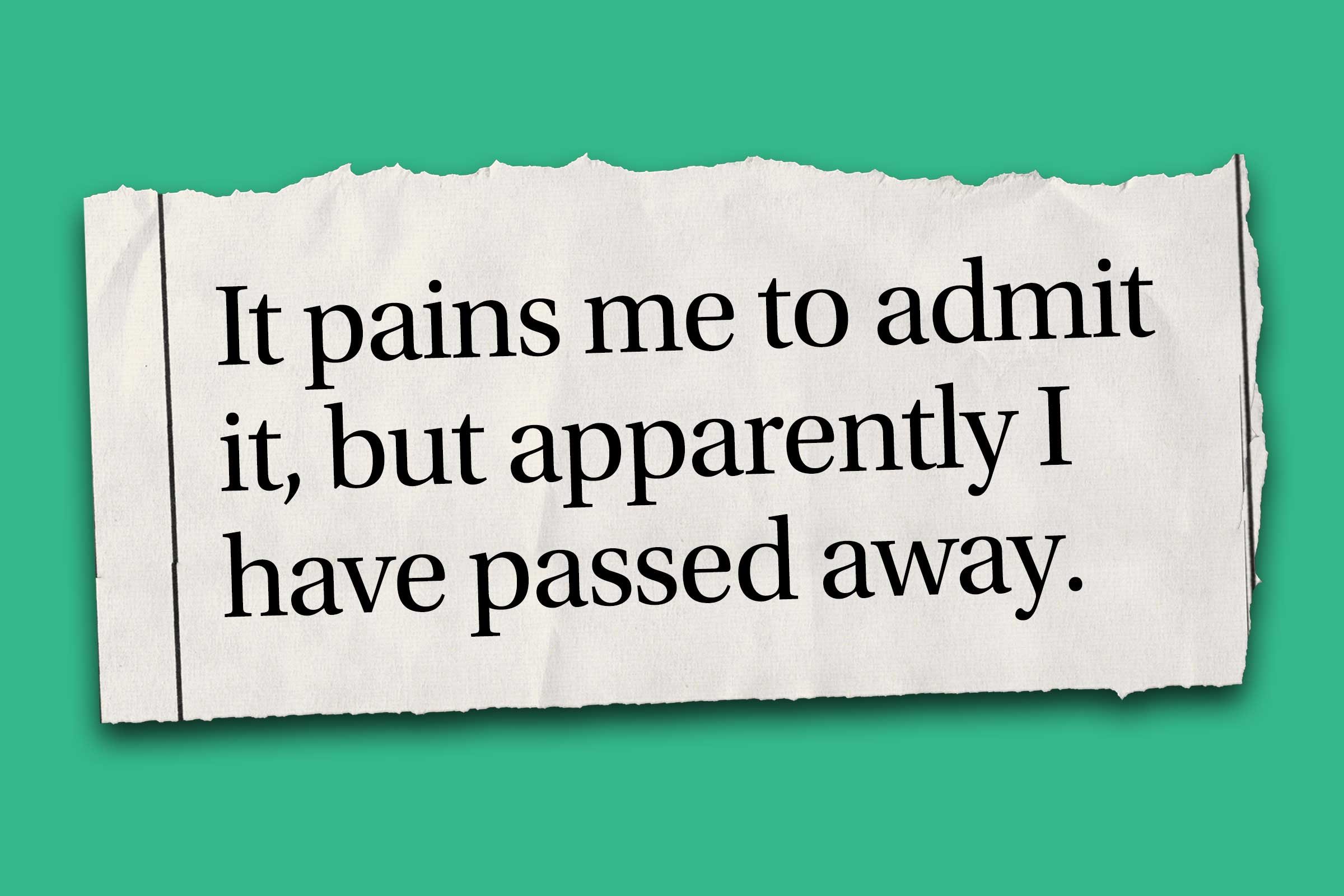 “It pains me to admit it, but apparently I have passed away.”

“Everyone told me it would happen one day, but that’s simply not something I wanted to hear, much less experience,” Emily DeBrayda Phillips goes on to explain. Emily DeBrayda Phillips’ obituary is hilariously self-written and self-aware about her existence and end: “If you want to, you can look for me in the evening sunset or with the earliest spring daffodils or among the flitting and fluttering butterflies. You know I’ll be there in one form or another. Of course, that will probably be comfort to some while antagonizing others, but you know me…it’s what I do.” She concludes with simple instructions: “If you don’t believe it, just ask me. Oh wait, I’m afraid it’s too late for questions. Sorry.” 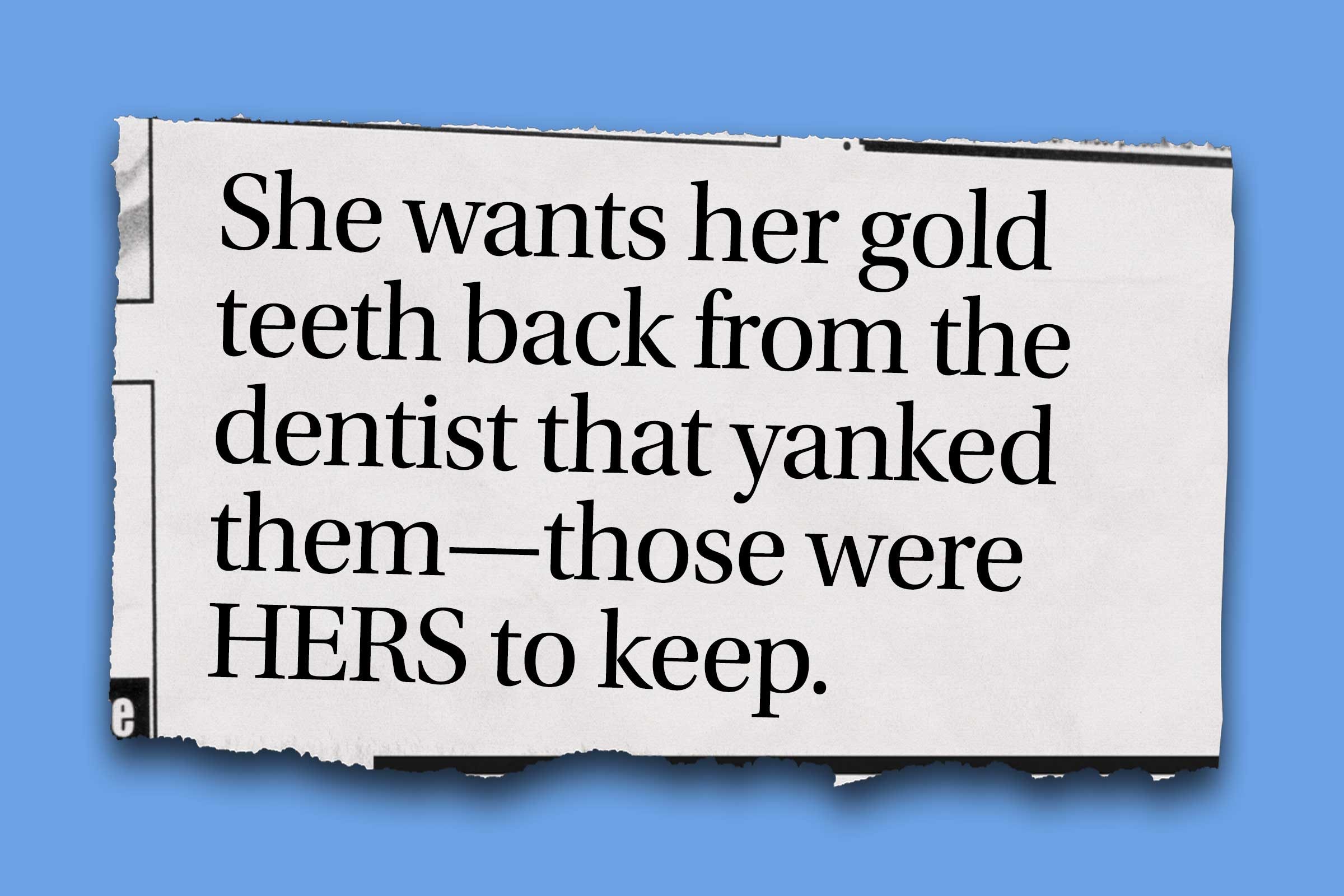 “She wants her gold teeth back from the dentist that yanked them—those were HERS to keep.”

This is exactly the kind of witticism you would expect in the obituary of someone who also requested “Another One Bites the Dust” be played at her funeral. Even more charming, Karen Short was affectionally referred to as “Hot Dog Lady” by the college students who frequented her hot dog stand. Give Hot Dog Lady her gold teeth back! But overall, it’s actually a very moving, very touching obituary. Here’s another poignant account from a grieving mother of her son’s final courageous act. 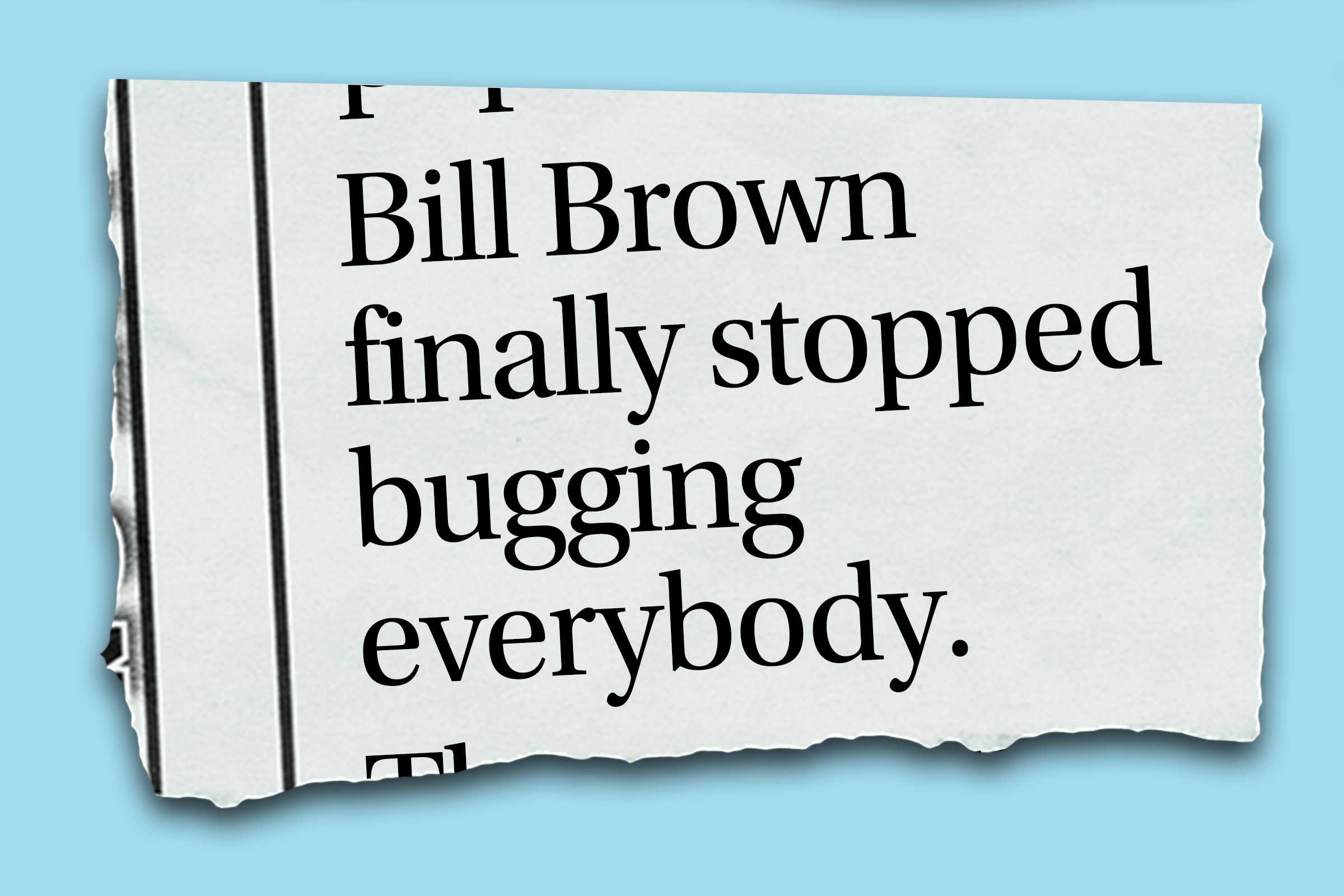 Rabblerouser Bill Brown’s obituary details his lifelong commitment to mischief, all the way up until he roused his last rabble in October 2013. Notable rabble: “Right to the end, he would do things like racing to beat other oldsters to empty chairs,” and meeting his wife, Ruth, while “trying to scare neighbor kids by acting like a barking dog when he threw open the front door, only to find himself barking at the Avon lady.” Now, find out about the people who faked their own death.