Tombstones always tell a story, and sometimes it's a hilarious one. 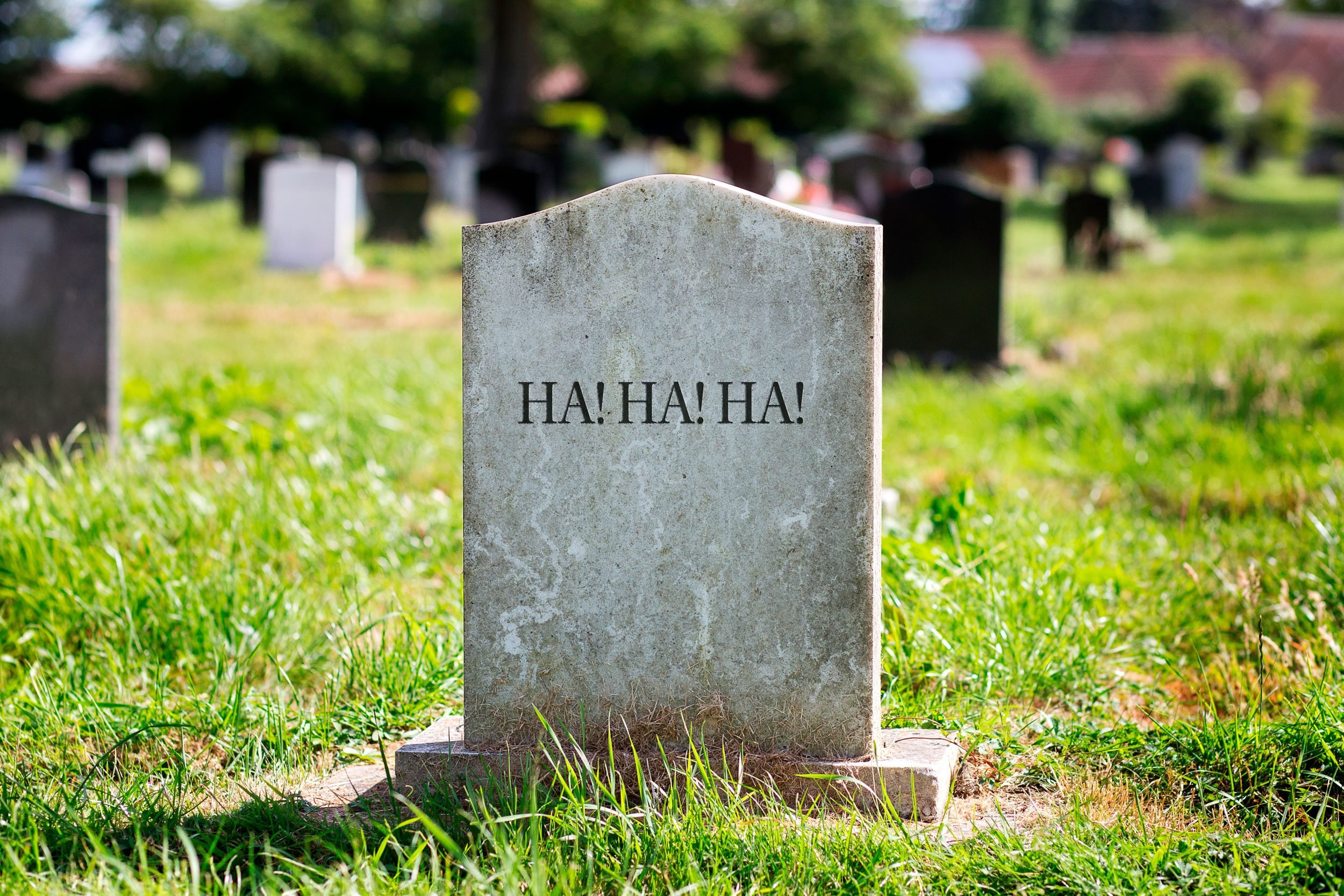 Everyone is born. Everyone dies. It’s only the stuff that happens in the middle that makes us unique. Most tombstones either skip over that part entirely or offer mere platitudes about the person buried below. With every life reduced to a name and two dates, is it any wonder cemeteries can be so depressing? Occasionally, however, a tombstone offers a clue or two about who someone was and how they impacted the people in their lives—and often, the result is heartwarmingly hilarious. For another glimpse at those who walked the Earth before it was our turn, check out the oldest cemeteries in every state.

The great voiceover artist Mel Blanc, who voiced Bugs Bunny, Woody Woodpecker, Daffy Duck, Porky Pig, Tweety Pie, Sylvester, and many other popular cartoon characters, was also the voice of Looney Tunes’ ubiquitous sign-off, “The-the-the-that’s all folks.” When Blanc died in 1989, his family made sure that all future generations who came upon his tombstone would know exactly what he was famous for in life. Not only does it say “That’s All Folks” in quotation marks, but it also refers to Blanc as the “man of a thousand voices,” as well as a “beloved husband and father.” Have you ever wondered why Looney Tunes isn’t Looney TOONS? We found out!

Are you obsessed with trying to answer the Jeopardy! questions that stump everyone? You have Merv Griffin to thank for that. The host of the eponymously titled talk show, which aired from 1962 to 1986, also created Wheel of Fortune. Biography calls him “America’s ultimate showman, one who knew what audiences wanted and made it his life’s work to entertain.” It’s said he often joked that he wanted one particular phrase inscribed on his tombstone: “I will not be right back after this message.” That’s precisely what he got. 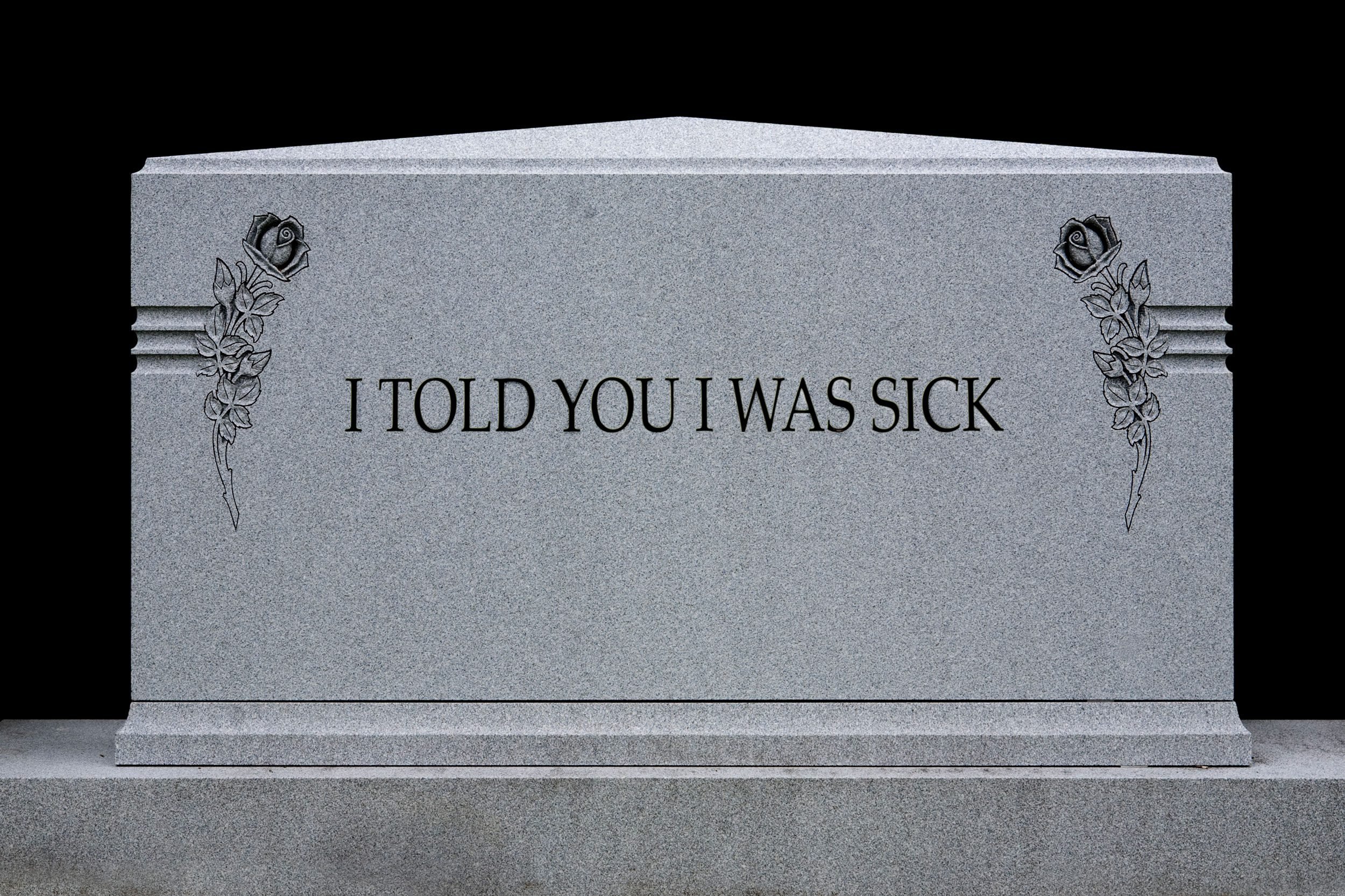 I told you so

In Princeton, New Jersey, you’ll find the gravestone of one William H. Hahn Jr. He was born in 1905 and died in 1980, and it is believed he ordered his tombstone himself a week or two before his demise. With its simple and to-the-point phrase, “I told you I was sick,” it gives the distinct impression that Hahn may have been a cantankerous sort of fellow, albeit one with a pretty darn good sense of humor. You’ll also get a kick out of these 10 funny roadside signs worth slowing down for. 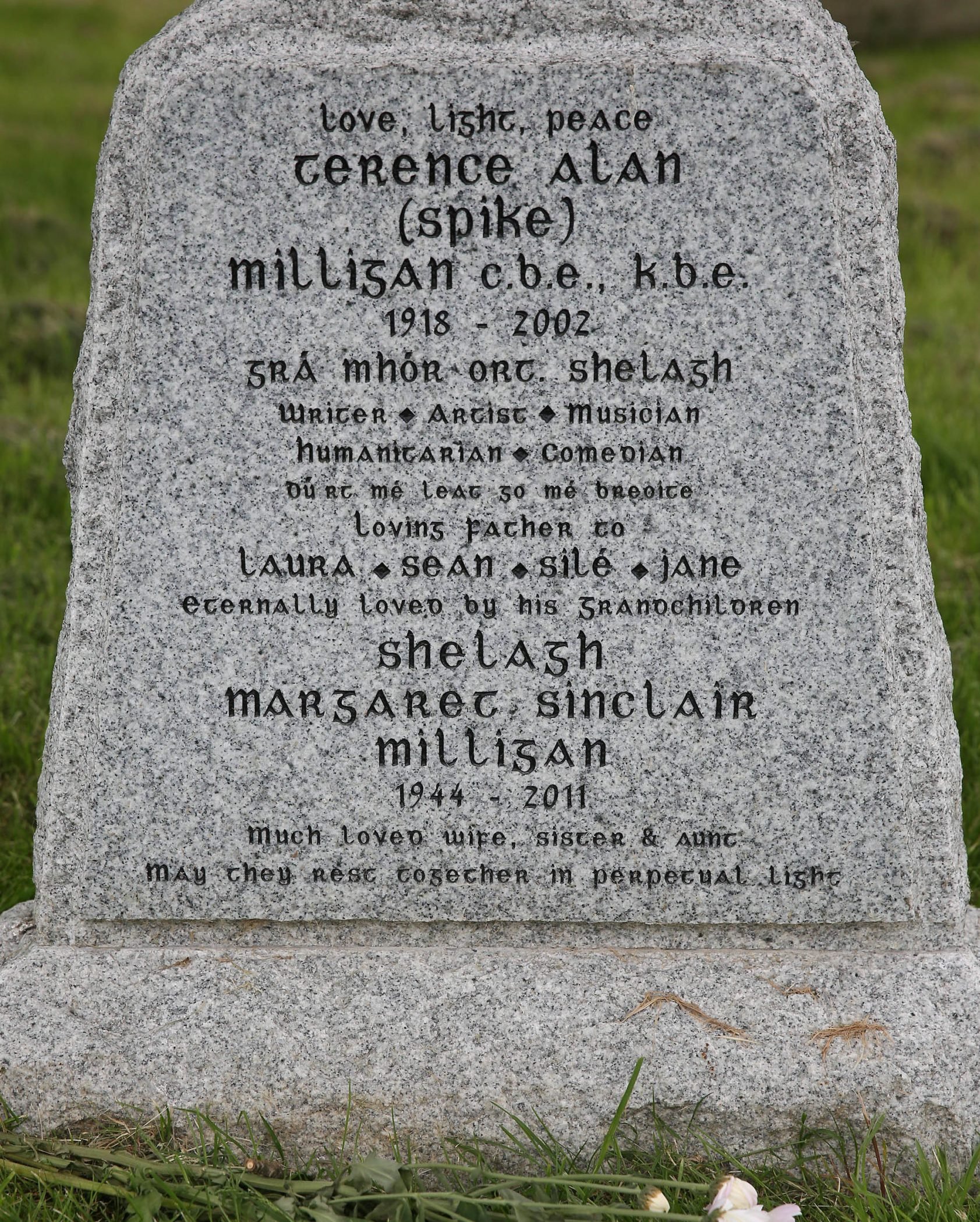 Like William H. Hahn Jr., Irish writer and comedian Spike Milligan, whose eccentric sense of humor was an important influence for Monty Python’s Flying Circus, also chose to let the world know that he knew better. Born in 1918, he died in 2002, but not before making sure his tombstone was inscribed with his version of the “told ya so” line, “I told you I was ill,” translated into Gaelic. While “I told you so” is one of the phrases smart people don’t use in everyday life, you have to admit that it’s pretty perfect here. In fact, Milligan’s epitaph was named the U.K.’s favorite in a recent survey, beating out Mel Blanc’s. 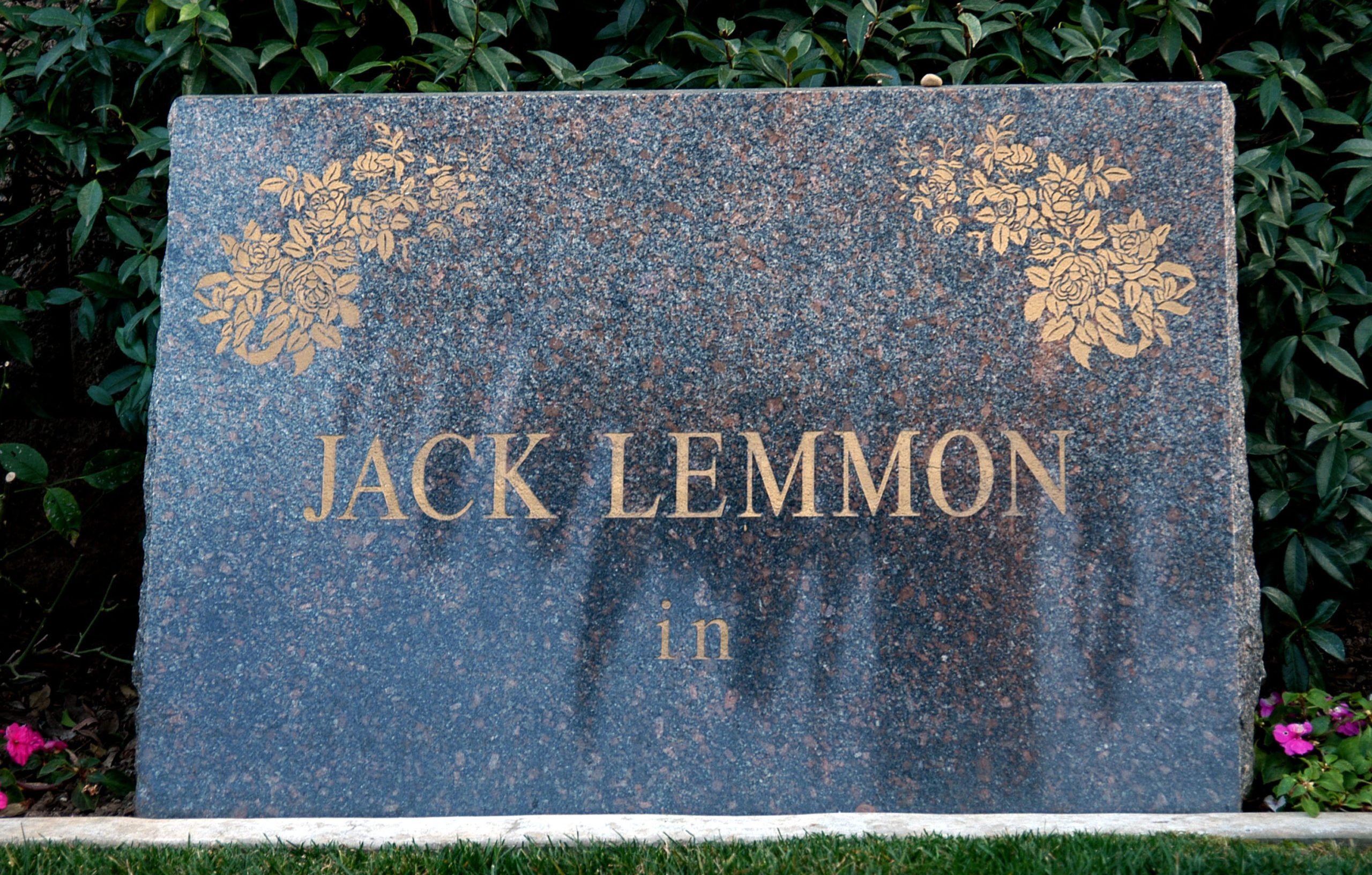 The star of the show

Apparently, it wasn’t enough that actor Jack Lemmon (1925–2001) left behind a legacy of more than 50 films (including Some Like It Hot and The Odd Couple), eight Academy Award nominations, and two wins. It seems he, or his loving family, wished to leave behind one last marquee in which his name made it over the title. In fact, this one last marquee doesn’t even bother with a title. It just says, “Jack Lemmon in…” and leaves the blank to be filled in by future generations. Don’t miss these 15 life lessons, including a priceless one from Jack Lemmon. 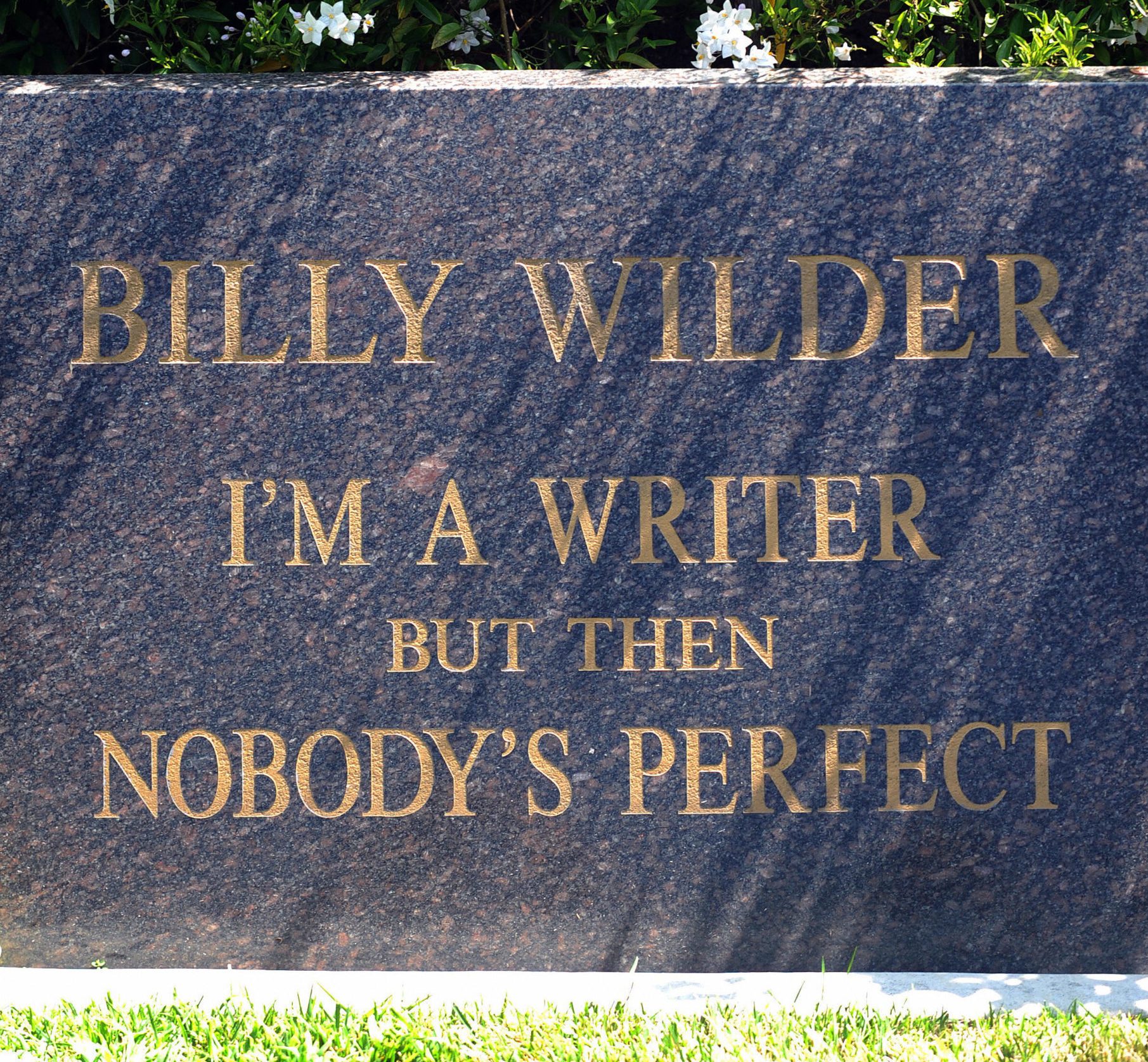 A perfect turn of phrase

Eight-time Academy Award winner Billy Wilder (1906–2002), who wrote the screenplay for and directed Jack Lemmon in Some Like It Hot, wasn’t just a funny guy. He was also the genius directorial mind behind the film noir classic Double Indemnity (as well as its cowriter with another film noir genius, Raymond Chandler) and the writer of more than 80 screenplays produced for film and television. But it appears he wanted to be remembered mostly as a funny guy. His epitaph—which reads, “I’m a writer but then nobody’s perfect”—is a nod to the hilariously ironic last line of Some Like It Hot. Check out these famous last words from 17 iconic people. 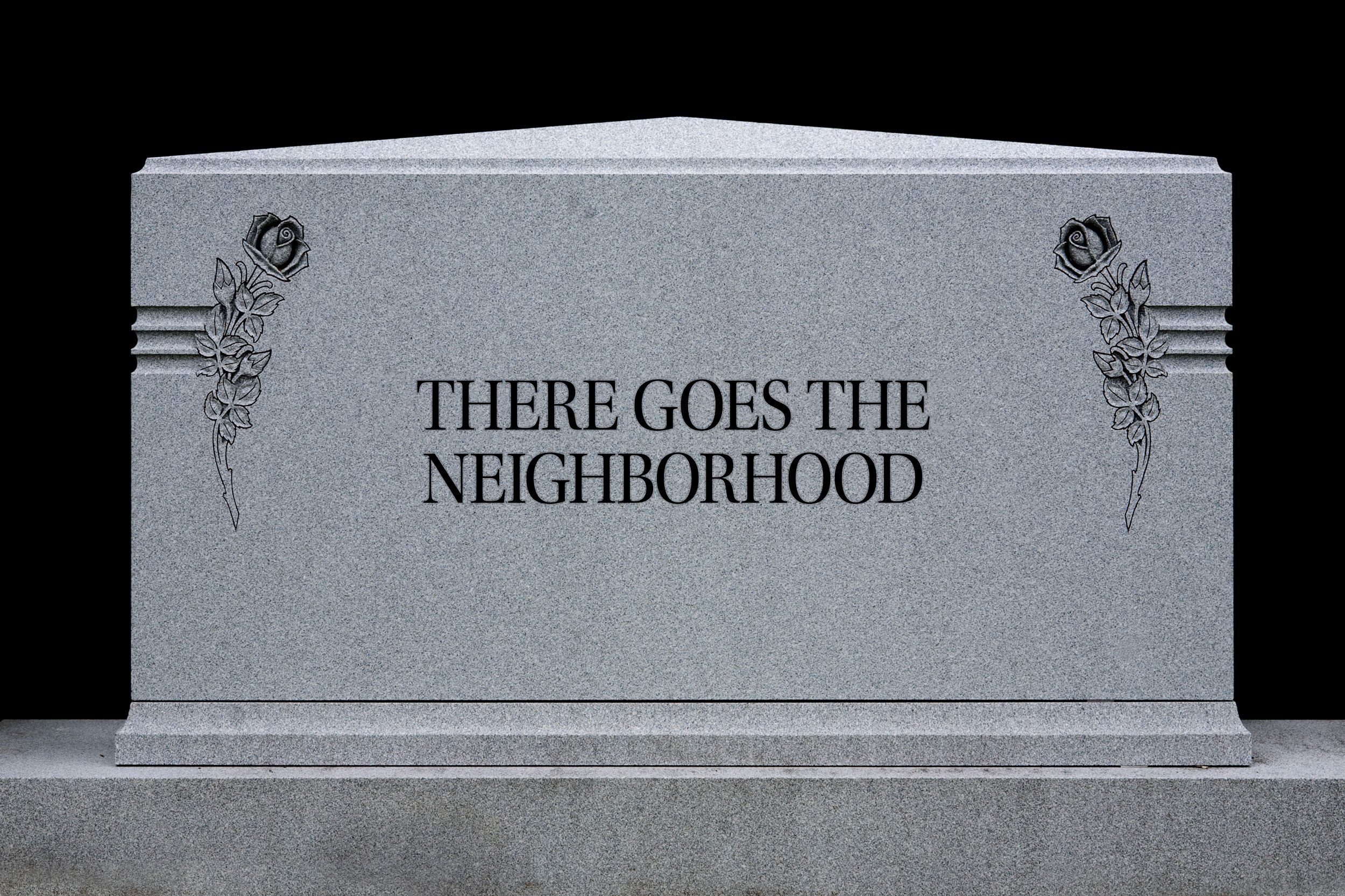 There goes the cemetery

In life, comedian Rodney Dangerfield (1921–2004) might be most famous for his role in the film Caddyshack, but fans of his stand-up will remember him starting many a set with “I don’t get no respect,” arguably one of the funniest quotes of all time. Self-deprecating to the very end…and beyond, he went with “There goes the neighborhood” for his epitaph. Dangerfield’s epitaph is so well known that it’s been used as a New York Times crossword puzzle clue. 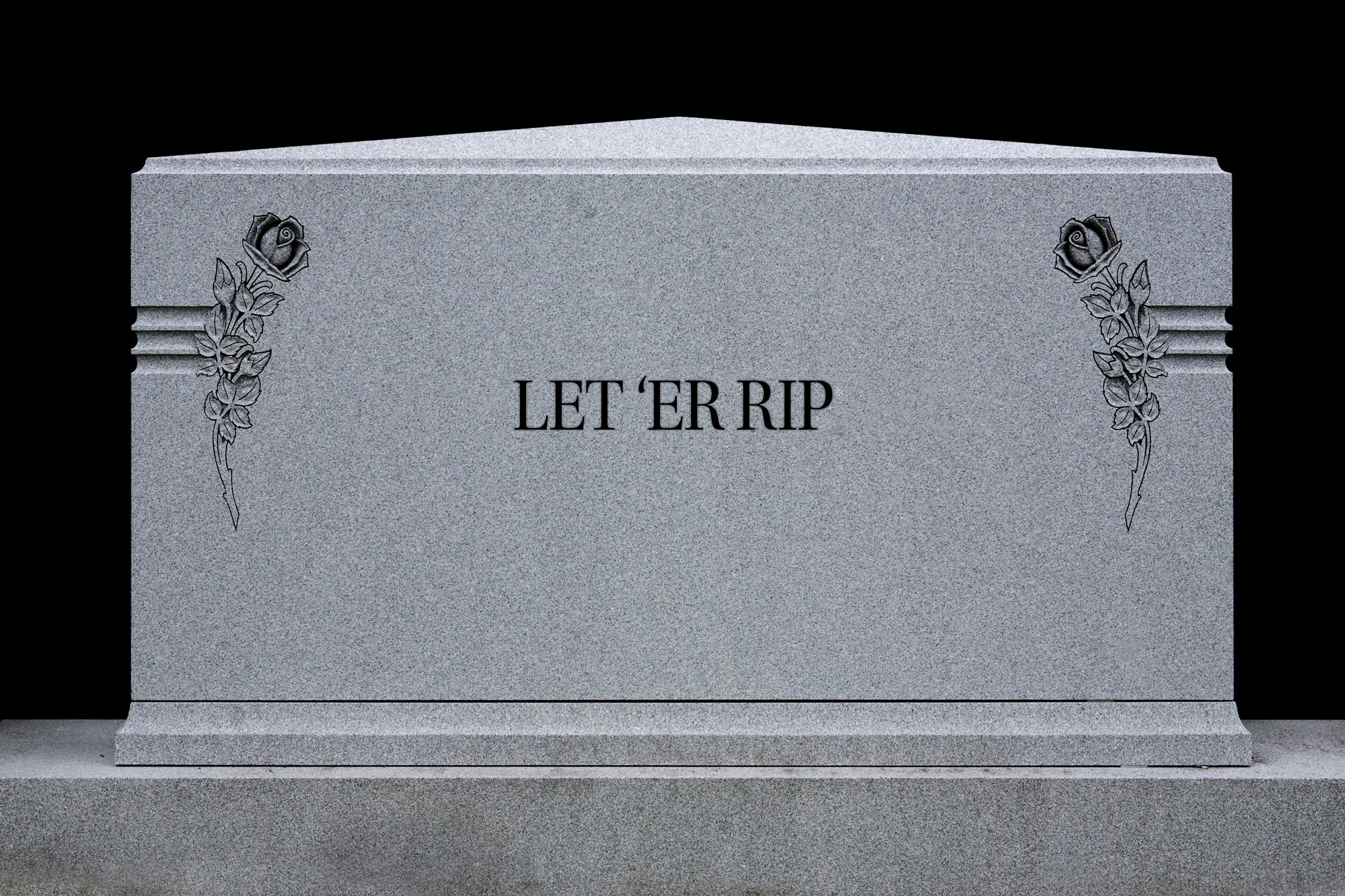 The joke lives on

Comedians all have their favorite jokes, and Leslie Nielsen was no exception. But his “Let ‘er rip” tombstone is so on point, people thought it couldn’t possibly be real. But a Snopes investigation settled the matter. The funnyman, who was most famous for his roles in the Airplane and Naked Gun films, had such a penchant for fart jokes, it was something he vowed he would take to the grave. Literally. In 1996, he announced that when he died, that’s what his tombstone would say. It does. 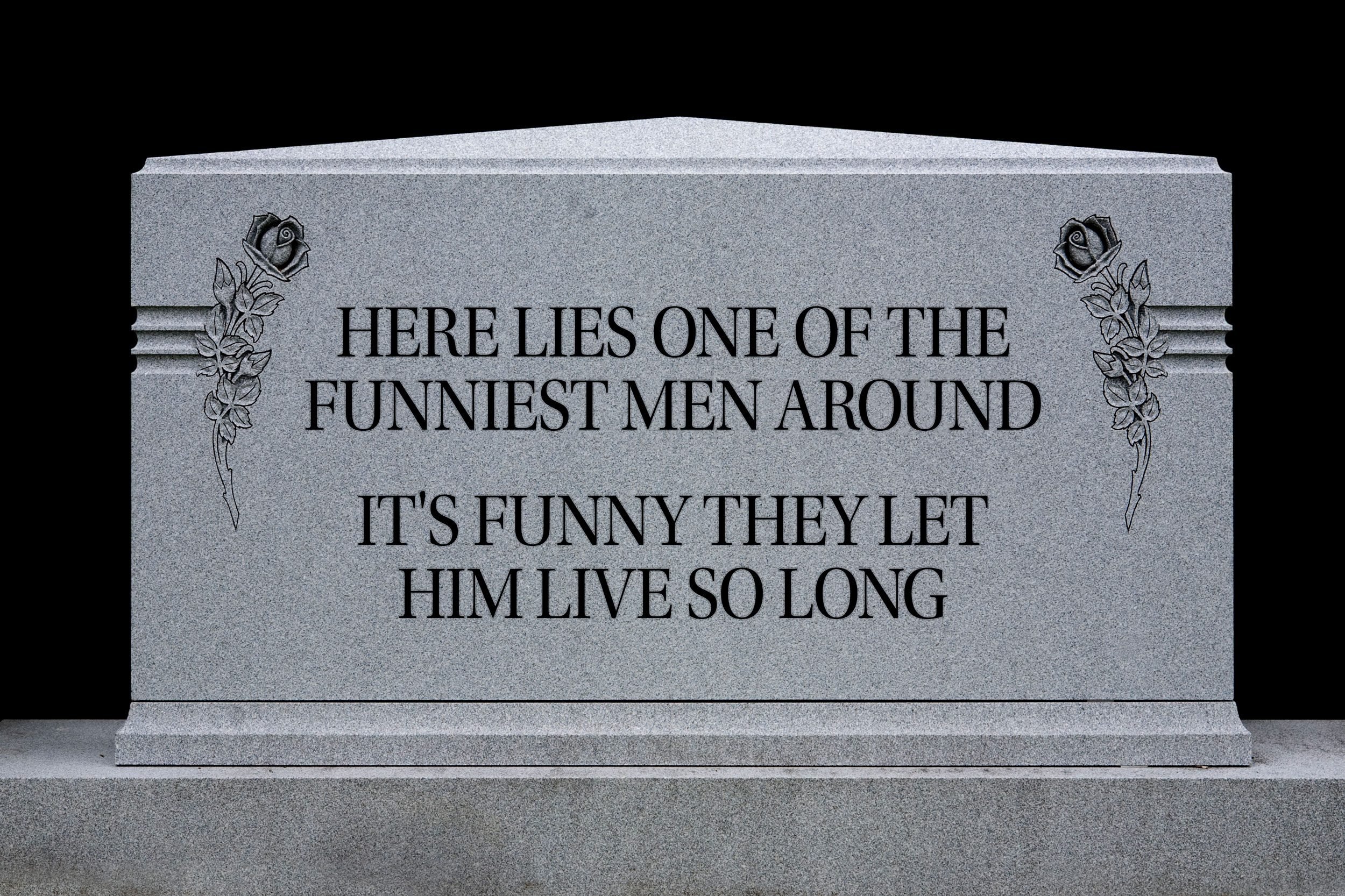 One of the funniest men you’ve never heard of

Warren Wesley Berkenbile wasn’t one of the most famous funny men around, but he was one of the funniest men in Davenport, Iowa…or so he would like you to believe. On the back of his tombstone, which he shares with his wife, Marie, who predeceased him in 1985, it is inscribed, “Here lies one of the funniest men around. It’s funny they let him live so long.” Here are 19 funny statistics you won’t believe are real (but are). 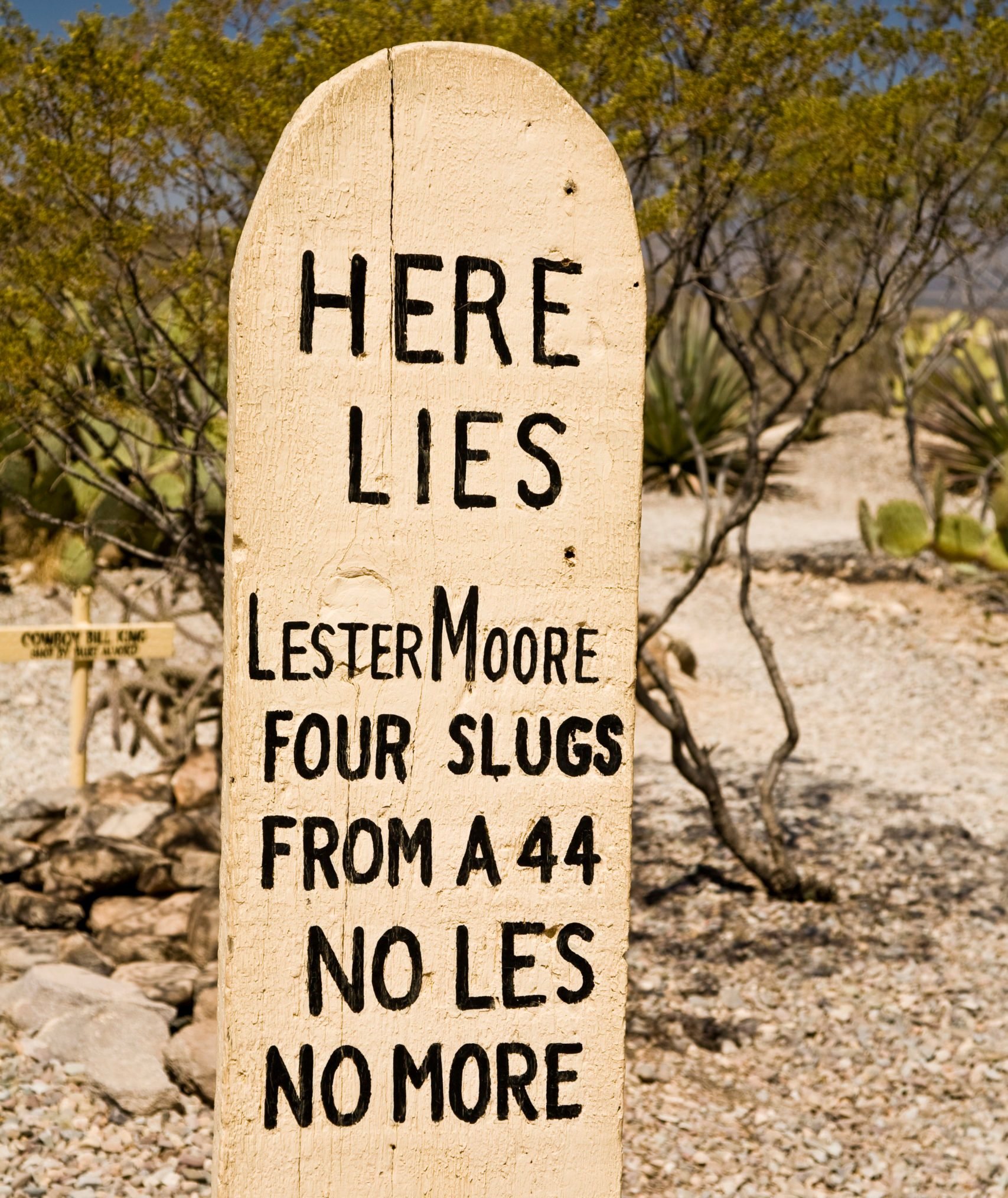 This tombstone actually exists in Tombstone, Arizona, in the Boothill Graveyard. While there are a number of interesting epitaphs there, including Frank Bowles’ (“As you pass by, remember that as you are so once was I, and as I am you soon will be….”) and Margarita’s (“Stabbed by gold dollar”), we’re partial to Lester Moore’s. A Wells Fargo Station agent in Naco, Arizona, he met his end when he delivered a damaged package to a disgruntled, and armed, Hank Dunstan, who also died of gunshot wounds in the ensuing scuffle. Moore’s epitaph reads: “Here lies Lester Moore, Four slugs from a 44, No Les, No more.” Learn about these 25 real-life ghost towns around the world. 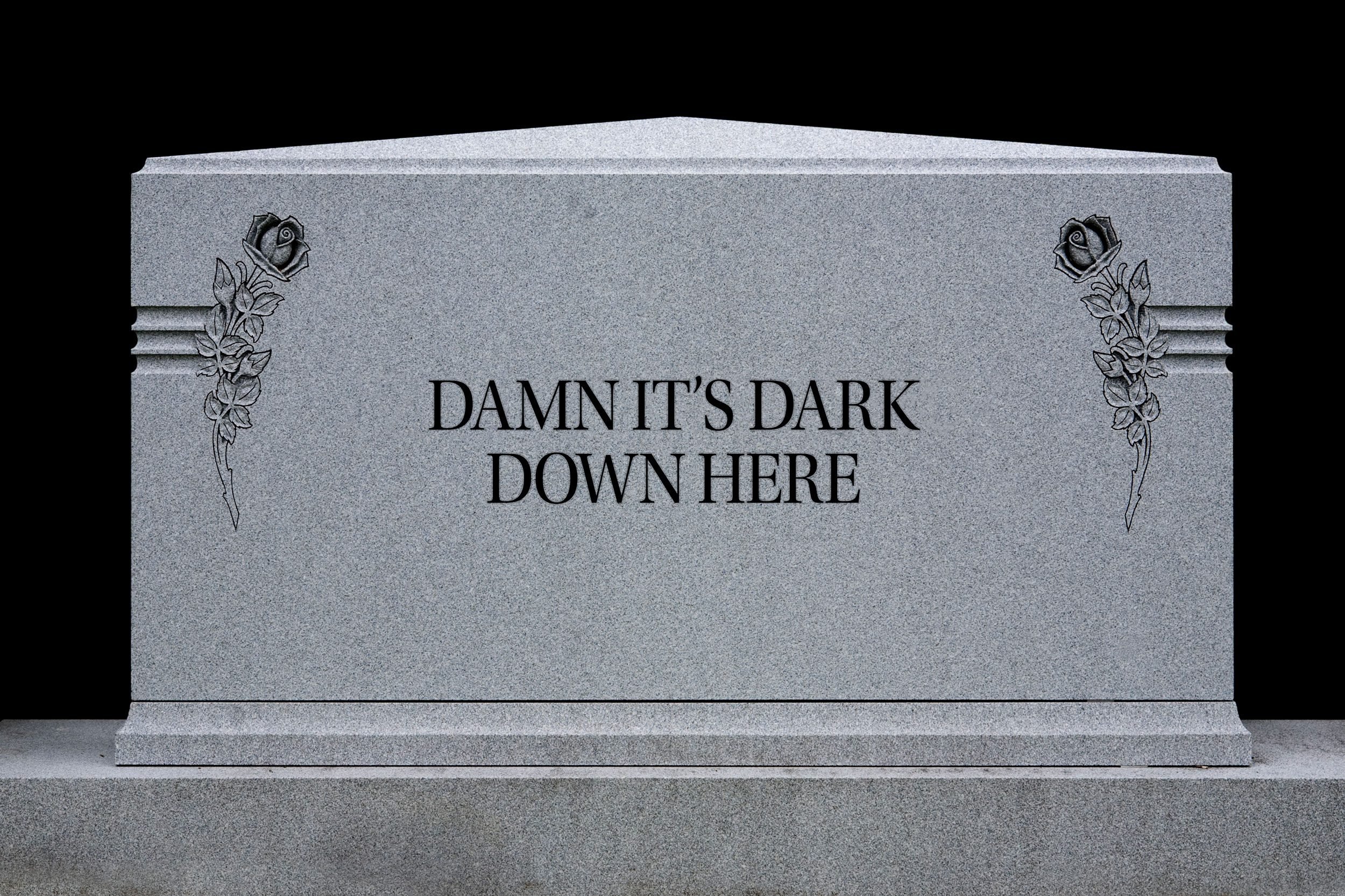 Clearly, Frances Eileen Thatcher was well-loved by her family and friends, who wrote kindly of her “beautiful heart” in her 2006 obituary. What they didn’t mention was her sense of humor, which must be inferred by the inscription on the back of her tombstone, “Damn, it’s dark down here.” By the way, science shows that if you love dark humor, you just might be a genius. 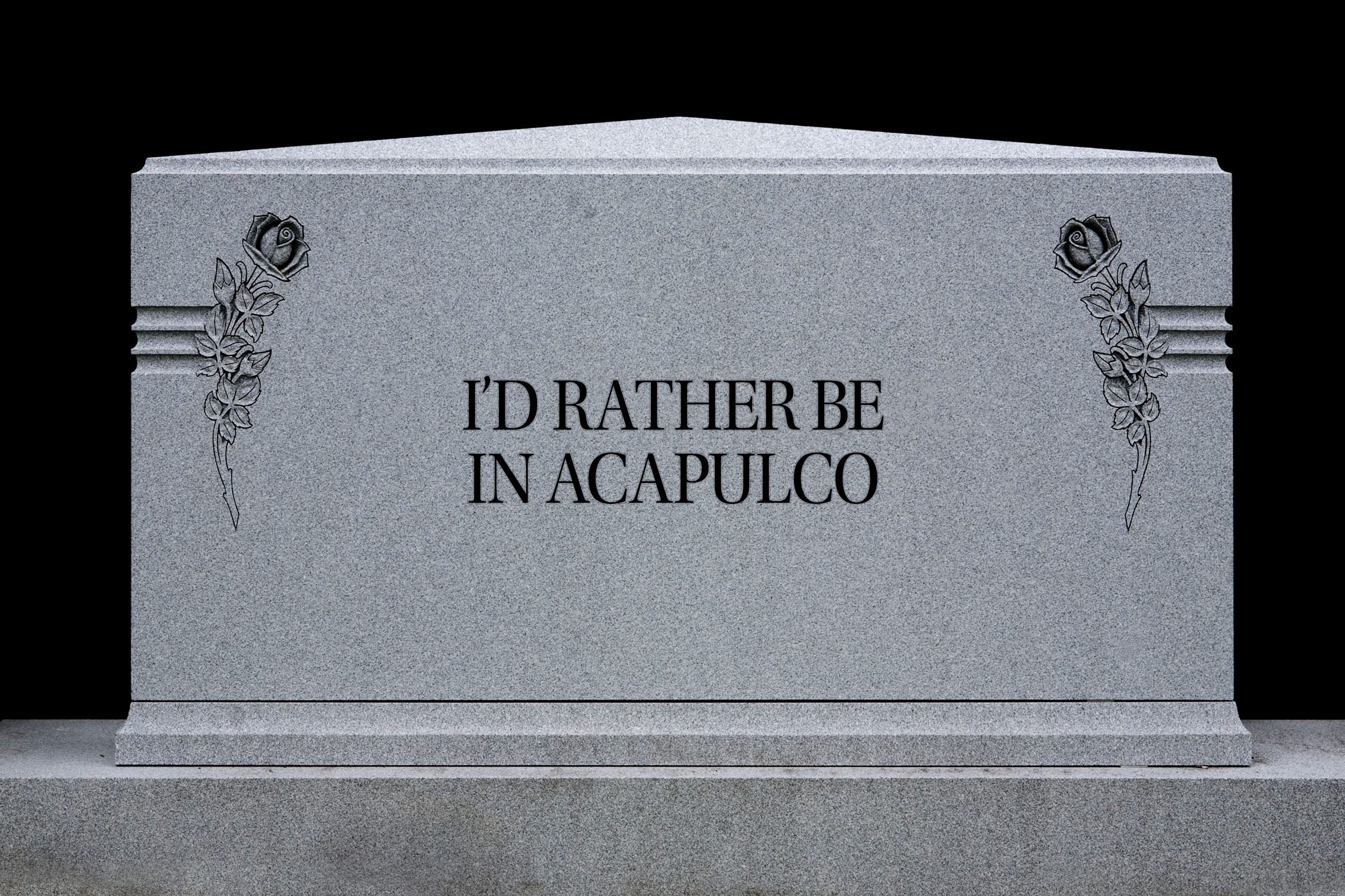 When Dr. Edward Russell Gann died in 1983 in Sigourney, Iowa, his wife and son had inscribed on his tombstone: “I’d rather be in Acapulco.” One can only hope they weren’t suggesting he had likely gone to someplace else that was very hot. Here are 9 completely underrated benefits that come with being sarcastic. 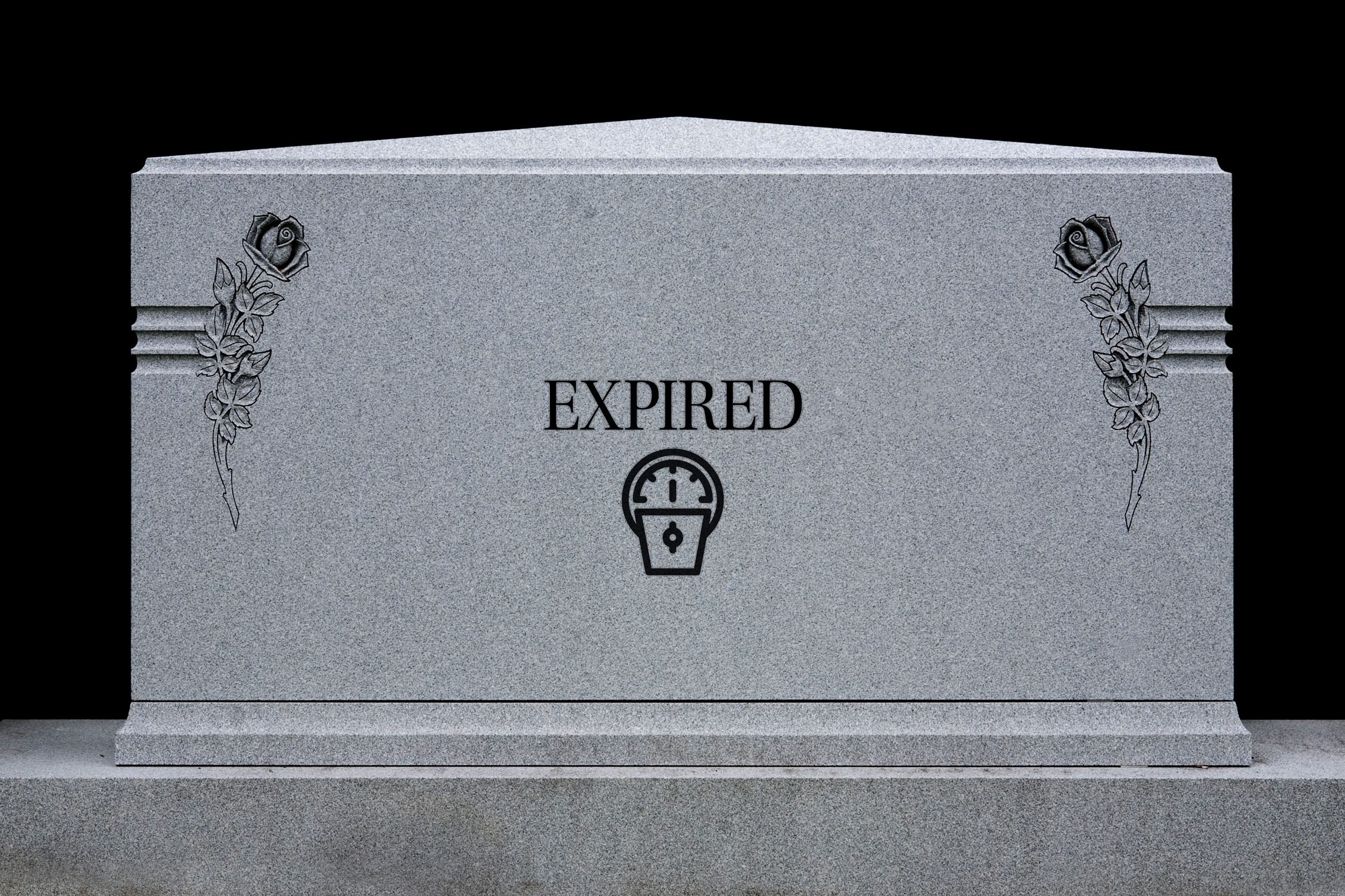 When Barbara Sue Manire “expired” on her 64th birthday in 2005, her children made sure her legacy of humor would live on in the form of a parking meter with a “64-year time limit.” Apparently, it was what Barbara wanted, too. 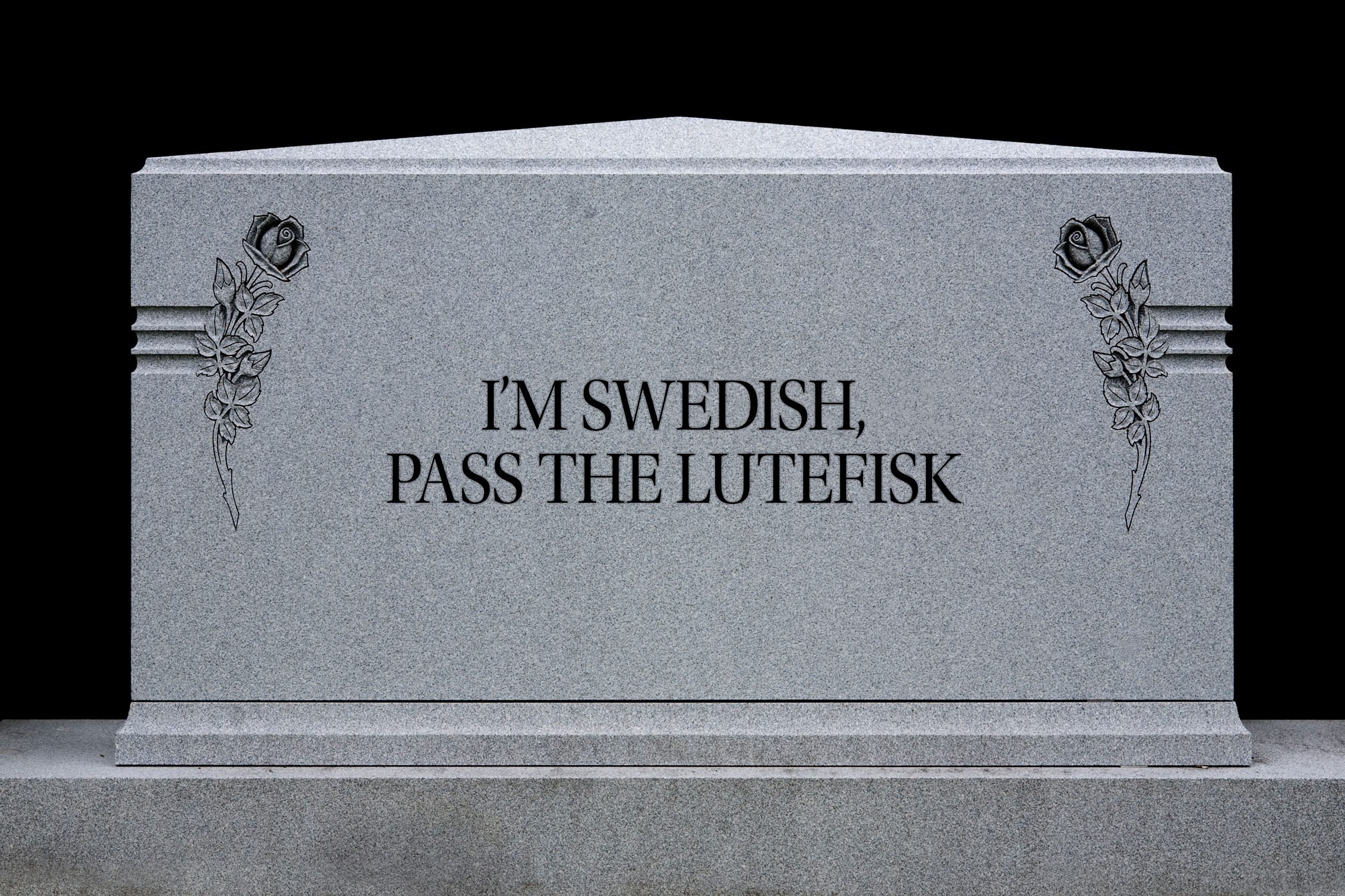 Genevieve Adeline Batty (1918–2005) spent her formative years in the Swedish community of Lindsborg, Kansas. Although she later moved to Wyoming, it’s clear she never forgot her roots because on her tombstone, it is inscribed, “I’m Swedish, pass the lutefisk.” It’s also clear Mrs. Batty had quite the sense of humor, since “the truth about lutefisk is you should never eat lutefisk,” which is codfish marinated in lye until it’s acidic enough to cause a chemical burn and then soaked in water and steamed into stinky, gelatinous submission. 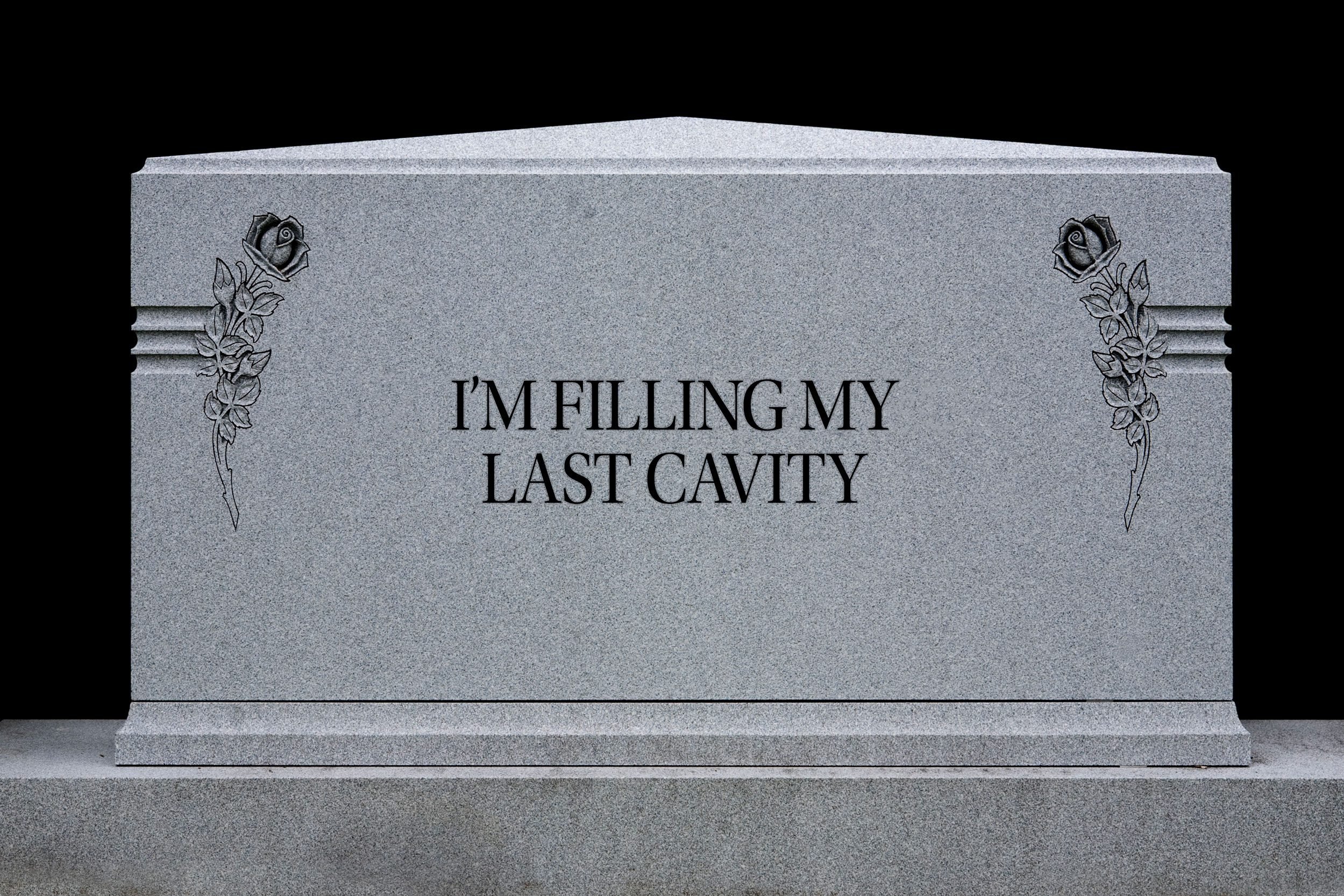 A dentist with a sense of humor

Both John Denby and his son, Maurice, were dentists. When John, born in 1870, passed away in 1927, his tombstone was inscribed with the phrase: “I’m filling my last cavity.” When Maurice passed in 1964, “Me too” was added to the stone. 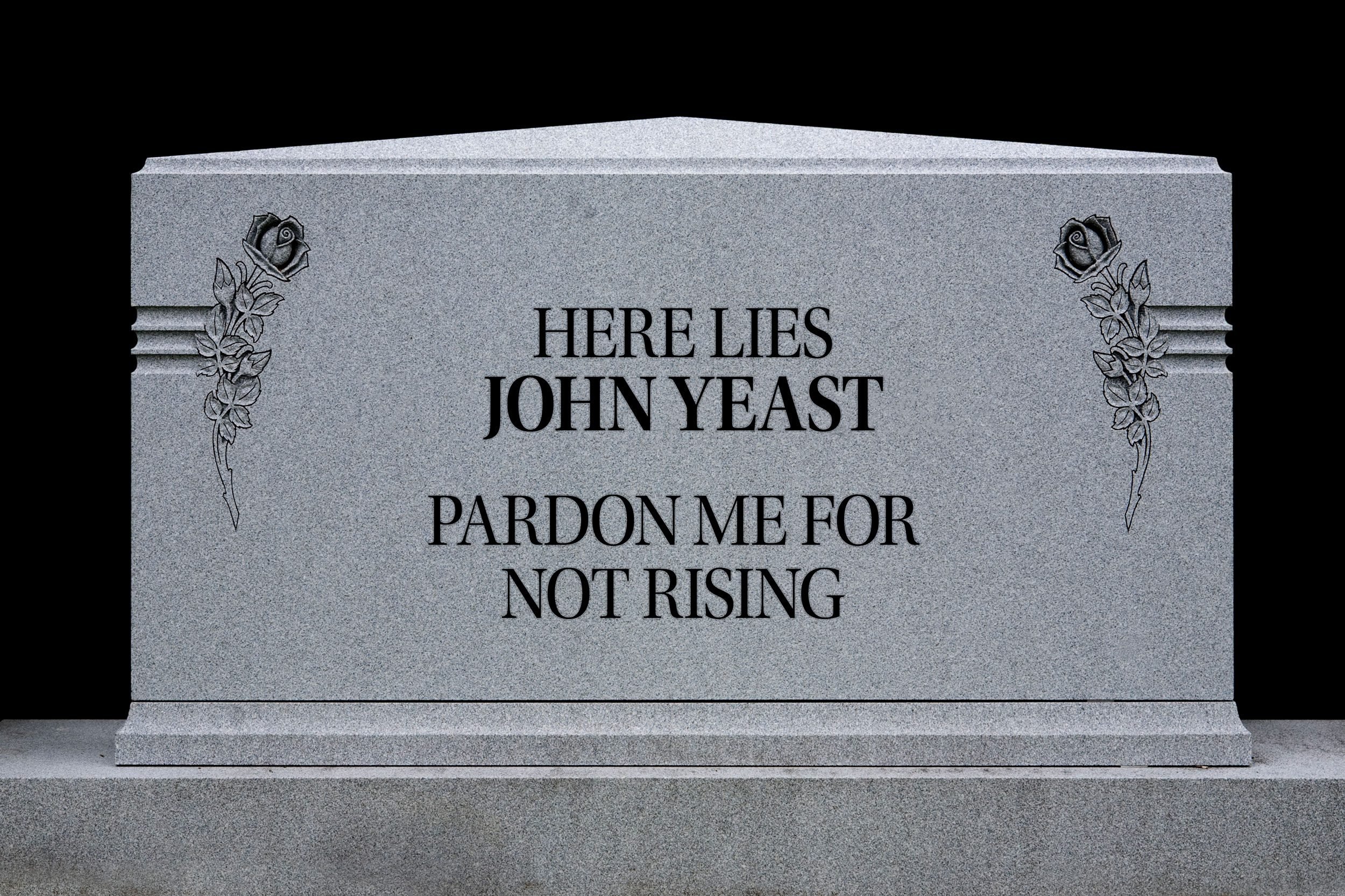 “Here lies John Yeast. Pardon me for not rising.” How many bread jokes do you think John heard (and used) over the course of his life? In case you were wondering, this cheeky tombstone is in Ruidoso, New Mexico. If this is right up your alley, check out our collection of clever puns. 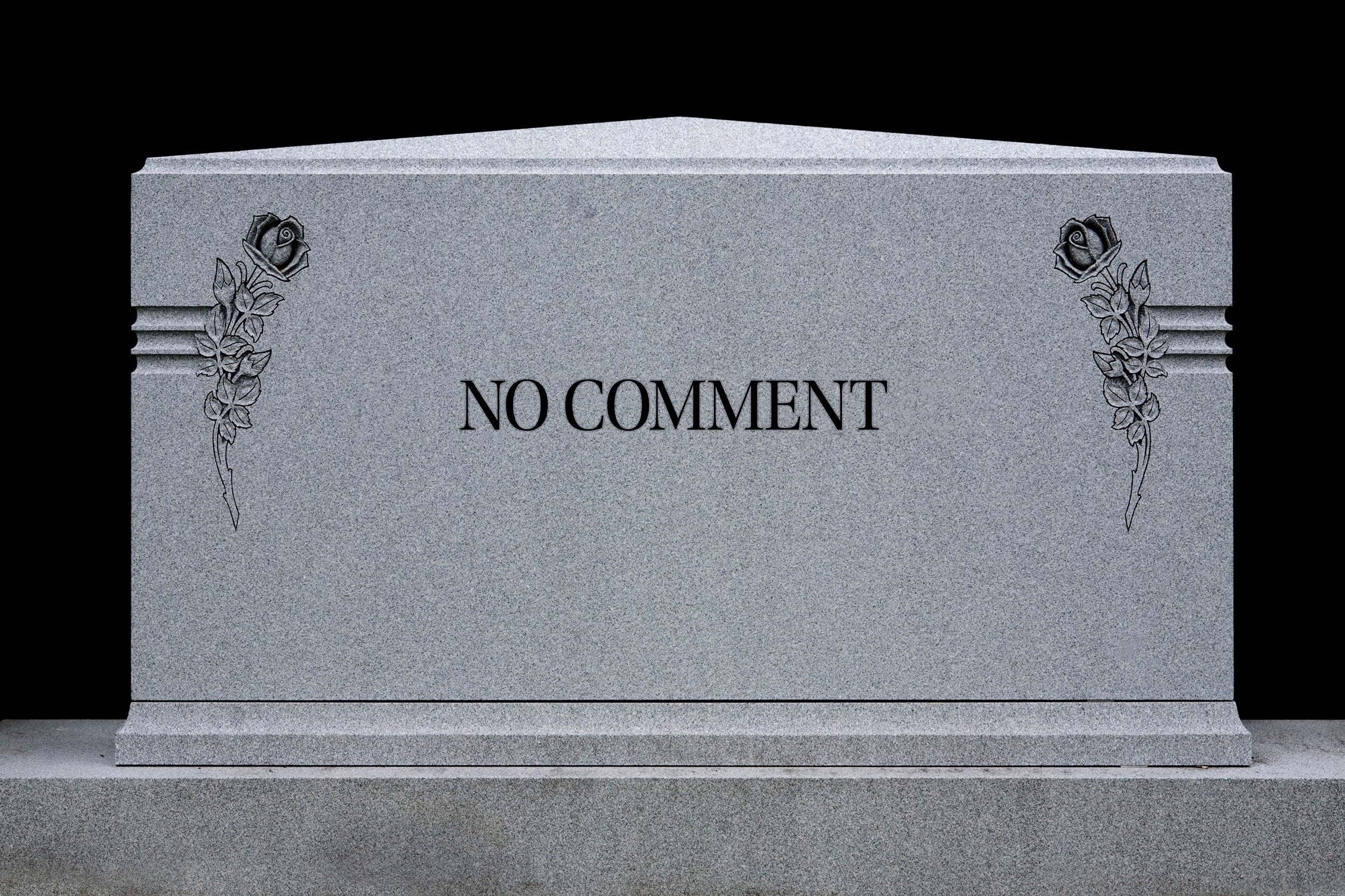 By the time author Edward Paul Abbey died in 1989, he had published 19 books. Despite the fact that Abbey was a man of many words, his epitaph reads simply, “No comment.”

The joke’s on us

In 1832, a 33-year-old Welshman died, leaving behind a wife, two sons, and a mystery: What was the man’s name? Where his name should have been on his tombstone, there’s instead a 285-letter cryptic crossword puzzle that he is said to have designed himself. The cryptogram, itself, isn’t particularly hard to decipher. If you trace the letters, you’ll see that no matter which direction you go, the message is the same: Here lies John Renie. What is harder to understand is why, as it turns out, this is not where the body of John Renie lies.

The Telegraph: “Spike Milligan’s epitaph ‘I told you I was ill’ voted UK’s favourite”