The Most Gorgeous Peninsulas in the United States

Why should mountains have all the fun? Peninsulas are a geographic wonder that deserve to share the spotlight. 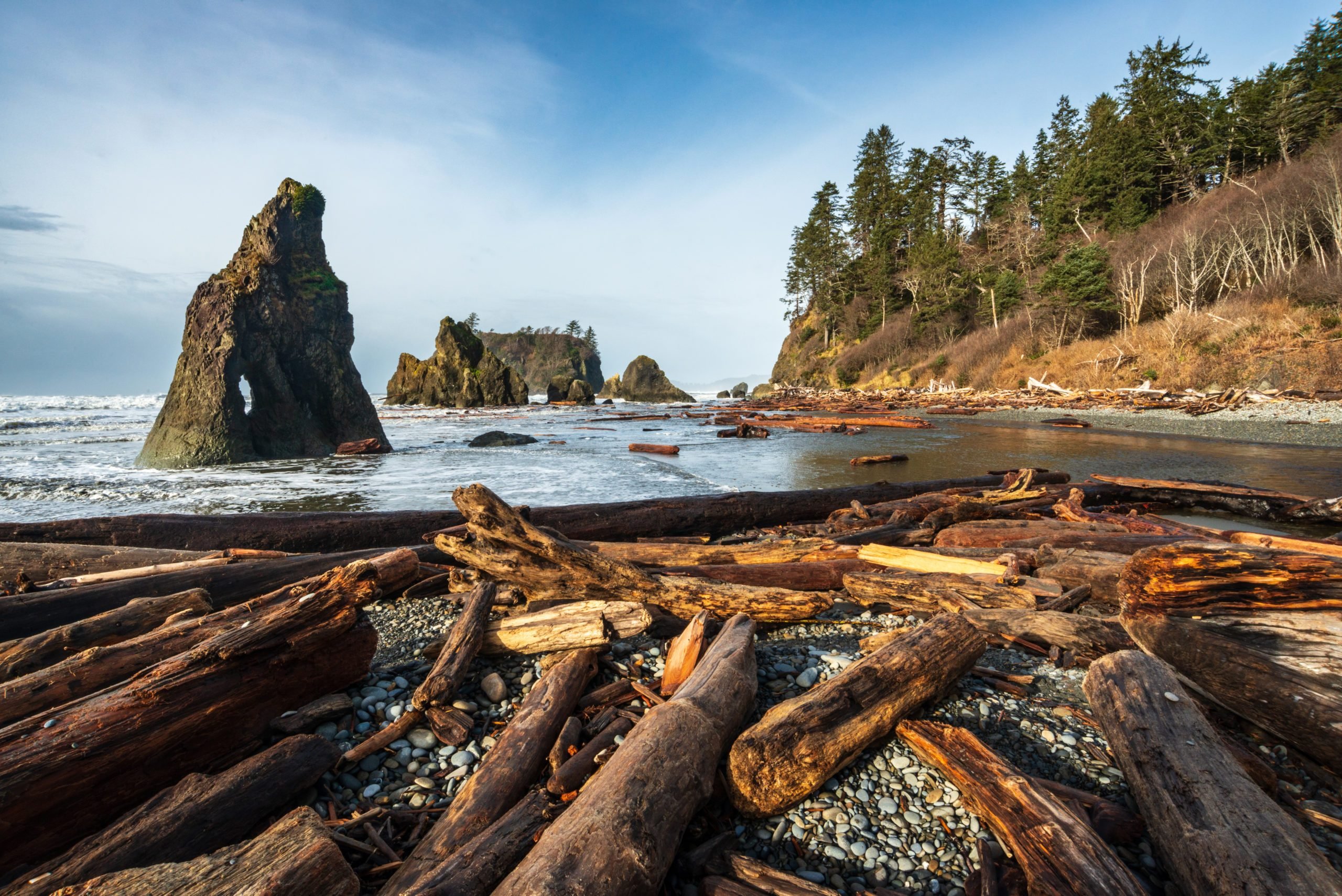 National Geographic defines a peninsula as “a piece of land that is almost entirely surrounded by water but is connected to the mainland on one side.” Peninsulas can be massive and contain entire countries, or teeny-tiny and just host a single lighthouse. Boasting dramatic water views, it’s no surprise that some of America’s most breathtaking areas are scenic peninsulas in both lakes and oceans. Read on for our roundup of the most gorgeous peninsulas in the United States, sure to scratch your wanderlust itch from home while guaranteeing to inspire future travels—perhaps as part of these great American road trips. 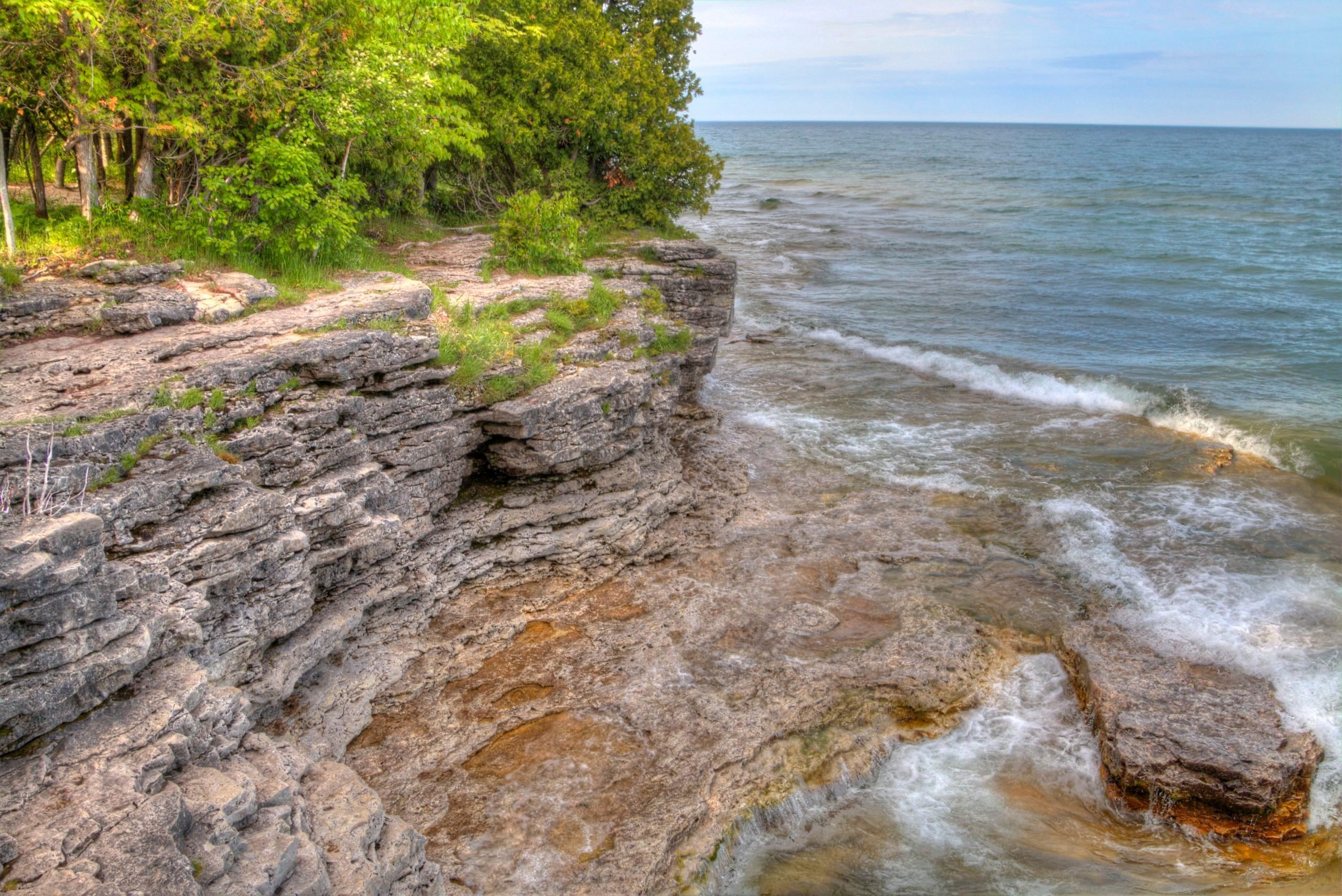 Better known as Door County, Eastern Wisconsin’s Door Peninsula is a stunning and serene spot, despite its grim naming inspiration. Christened “Death’s Door,” the narrow passageway between Washington Island and the tip of the peninsula was long associated with shipwrecks and is a premier freshwater diving spot. On a happier note, this area is also known as “the Cape Cod of the Midwest.” This 80-mile-long strip of land juts into Lake Michigan and offers 300 gorgeous miles of shoreline, charming cottages, cute lake towns, an abundance of lighthouses, and multiple state parks, meaning Door County shouldn’t be skipped. Plus, due to the warm embrace of its Scandinavian roots, from traditional fish boils to fika breaks, Door County is one of the 12 U.S. destinations that could feel like your canceled trip abroad. You might also want to consider an autumn visit, as Door County’s Village of Fish Creek is one of the best places to see fall foliage in America. 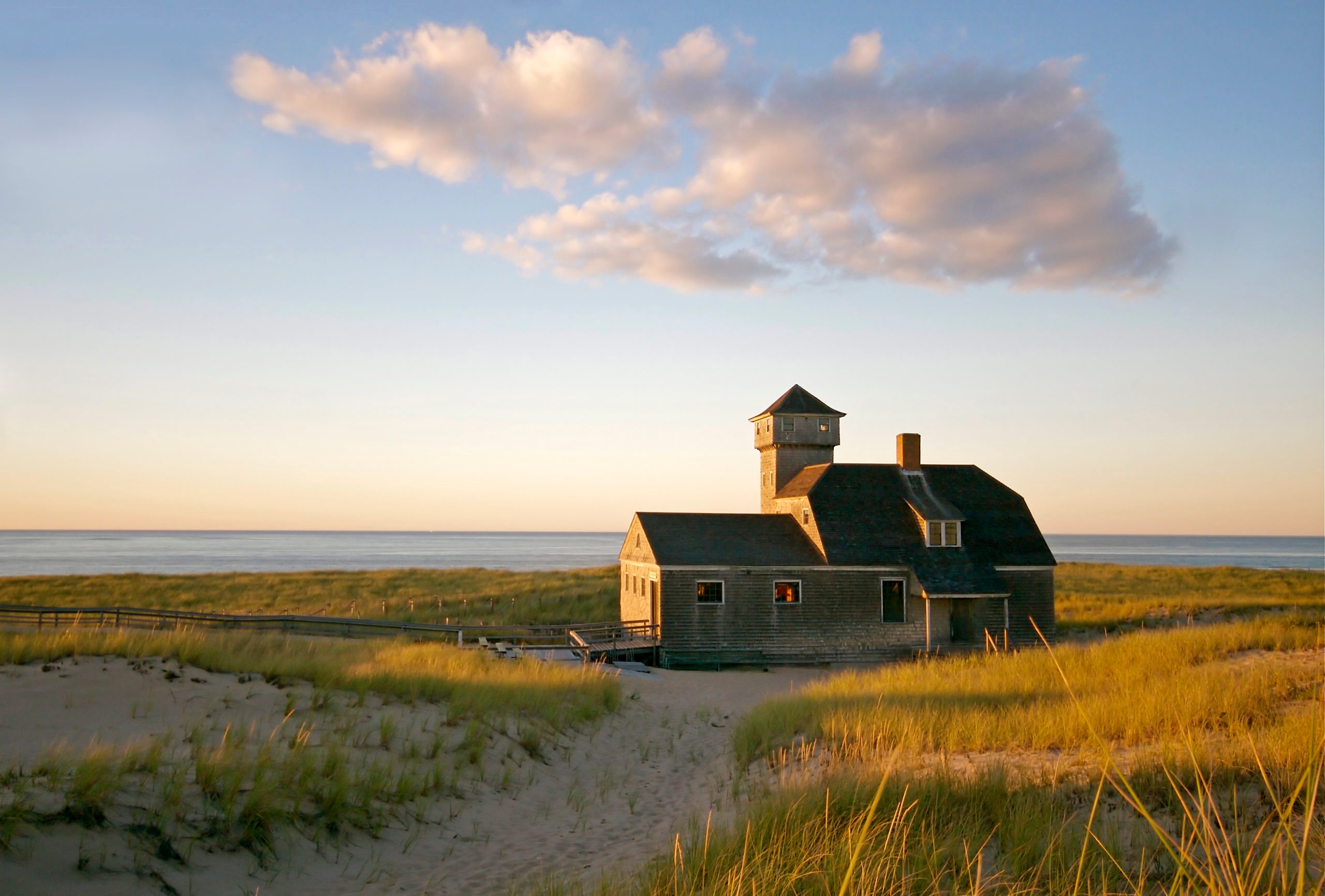 Technically, a cape refers to the tip of a peninsula, but in this case, it was pretty enough to warrant naming the entire thing. Cape Cod is a hook-shaped peninsula in a New England paradise. A famed Kennedy family summer retreat, the Cape is rich in natural wonders and steeped in tradition. More than 40,000 acres remain protected within the Cape Cod National Seashore, offering pristine views exempt from the spoilage of development. The bodies of water that surround the cape include Nantucket Sound, the Atlantic Ocean, Cape Cod Bay, and Massachusetts Bay. The Cape Cod Peninsula also claims more than 400 miles of gorgeous shoreline, from sandy dunes dotted with vegetation to pretty beaches full of vacationers. While you’re in Massachusetts, spend a few days in Boston—it’s one of the East Coast vacations you need to take at least once. 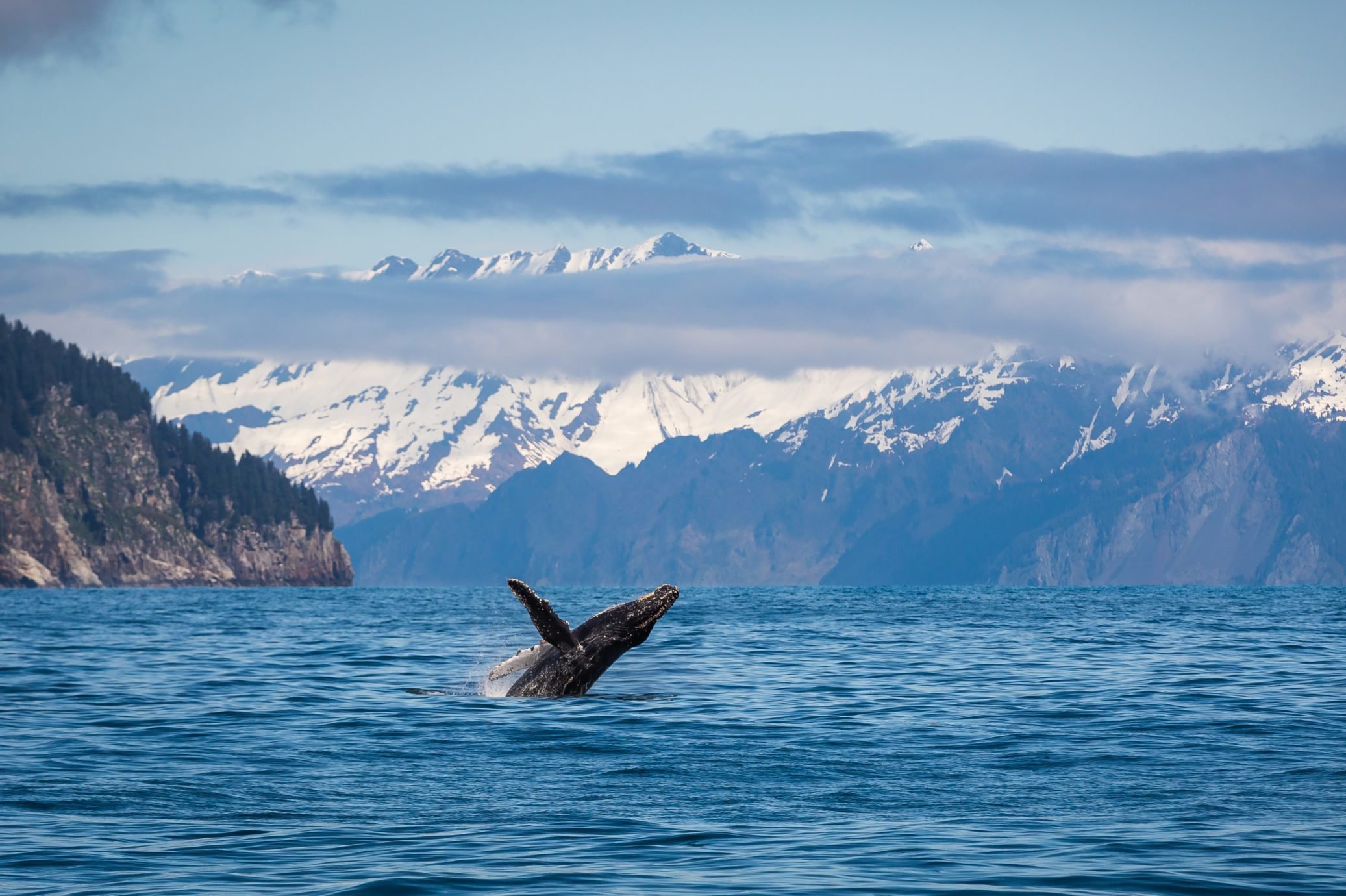 With the fitting nickname of Alaska’s Playground, the large Kenai Peninsula offers tons of varied natural views. There are the glaciers and deep fjords near Seward, the pristine bays near Homer, and sprawling wilderness in between. Jutting into the Gulf of Alaska just south of Anchorage, this peninsula is an outdoor paradise that is largely covered by national forest, national park, and state forest land. Salmon-rich waters fill the Kenai River and several lakes, attracting the bears the region is known for. In fact, a Kenai fjords wildlife cruise was voted the most popular tourist attraction in the state. For those who enjoy a good, old-fashioned railroad trip, check out the Alaska Railroad route from Anchorage to Seward. 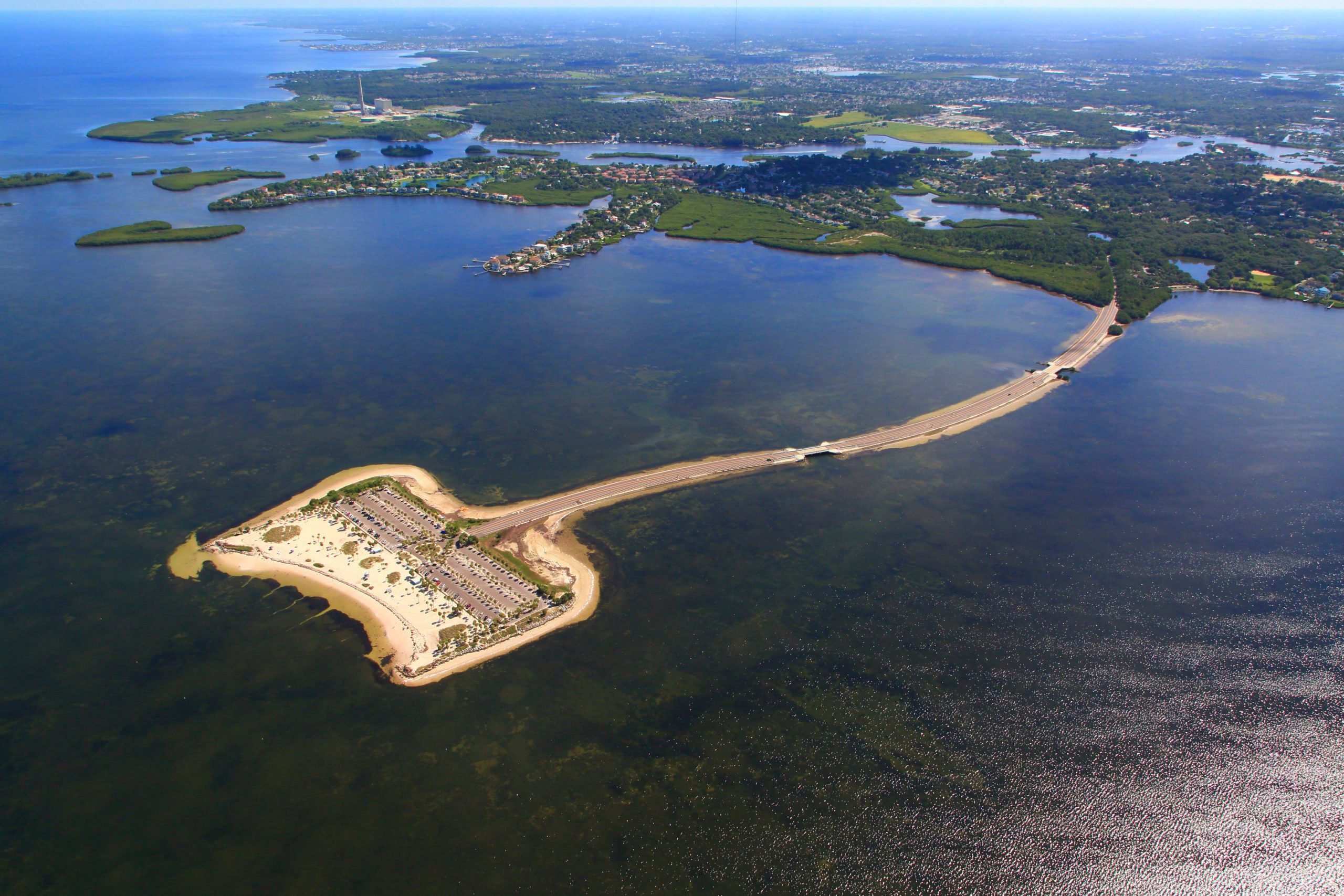 Nearly the entire state of Florida is itself a massive peninsula, straddling the waters of the Gulf of Mexico and the Atlantic Ocean. But it’s most scenic spot lies halfway down the west coast of the state on the pretty Pinellas Peninsula. Home to tourist staples like St. Pete’s Beach, these soft, sandy shores actually grow into the highest coastal bluff in Western Florida. This peninsula’s beauty lies in its multiple natural offerings—wetlands ripe with majestic cypress trees and bluffs chock-full of signature palms. And the star of the show remains the turquoise water of the Gulf, which has long enchanted locals and visitors alike. Barrier islands, miles of sandy beaches including one of the best beaches in America, a famous pink hotel, and more await you at Pinellas Peninsula. 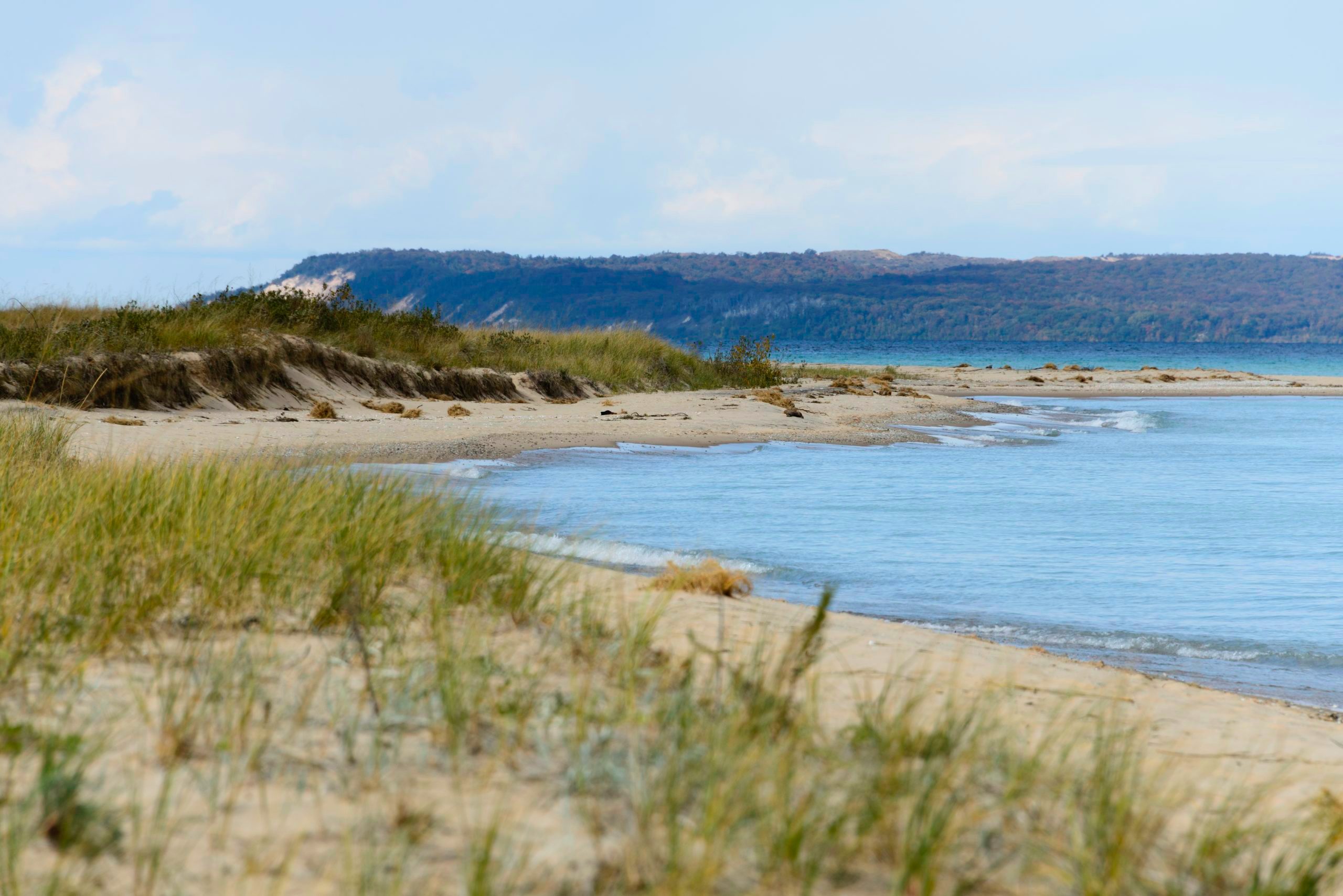 Michigan’s answer to Door County is the Leelanau Peninsula on the lower peninsula. It rests between Grand Traverse Bay and the wide-open blue waters of Lake Michigan, the Riviera of the Midwest. Be sure to make time for Sleeping Bear National Lakeshore, with its mighty sand dunes, dense forests, and windswept beaches; notably, visitors can also occasionally view the enchanting northern lights in all their twinkling, chartreuse glory. Additionally, geology enthusiasts should search for the famed mottled Petoskey stones in Leelanau State Park near the tip of the peninsula. Finally, Traverse City is home to three lighthouses, while Leland contains century-old fishing shanties that have been converted into cute, colorful shops. Here are another 12 of the best places to see the northern lights around the world. 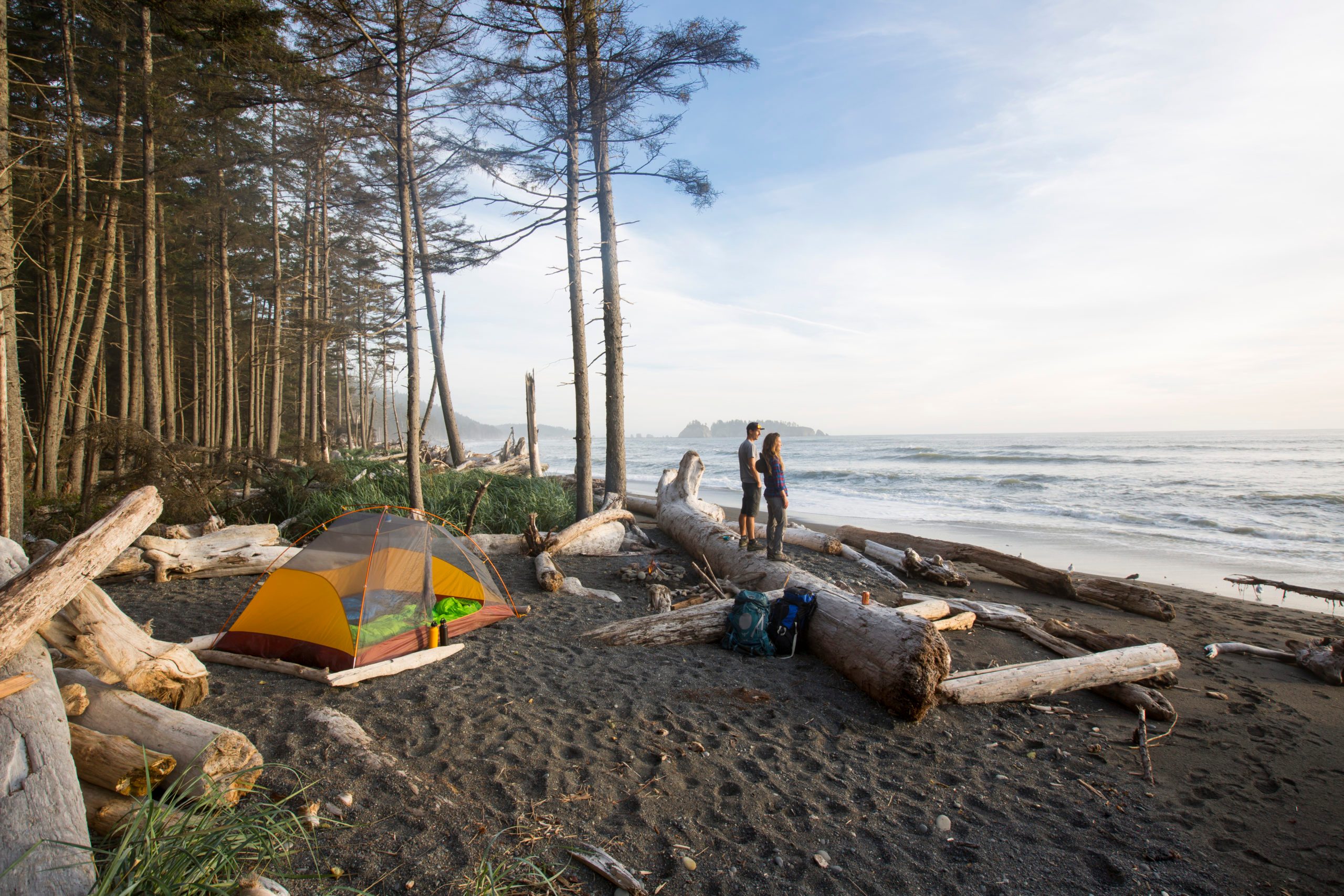 Washington State’s massive Olympic Peninsula is one of the most gorgeous spots in the country. Within its almost one million acres, you can see enchanted valleys, mighty mountains, old-growth forests, and quiet shores. It’s also part of a vast protected wilderness and home to one of America’s least-visited national parks, Olympic National Park. While it stuns all year long, consider a warm-weather visit, as it’s considered one of the best national parks to visit for spring wildflowers. Additionally, prepare for epic glacier meets rainforest views in this uniquely beautiful ecosystem. 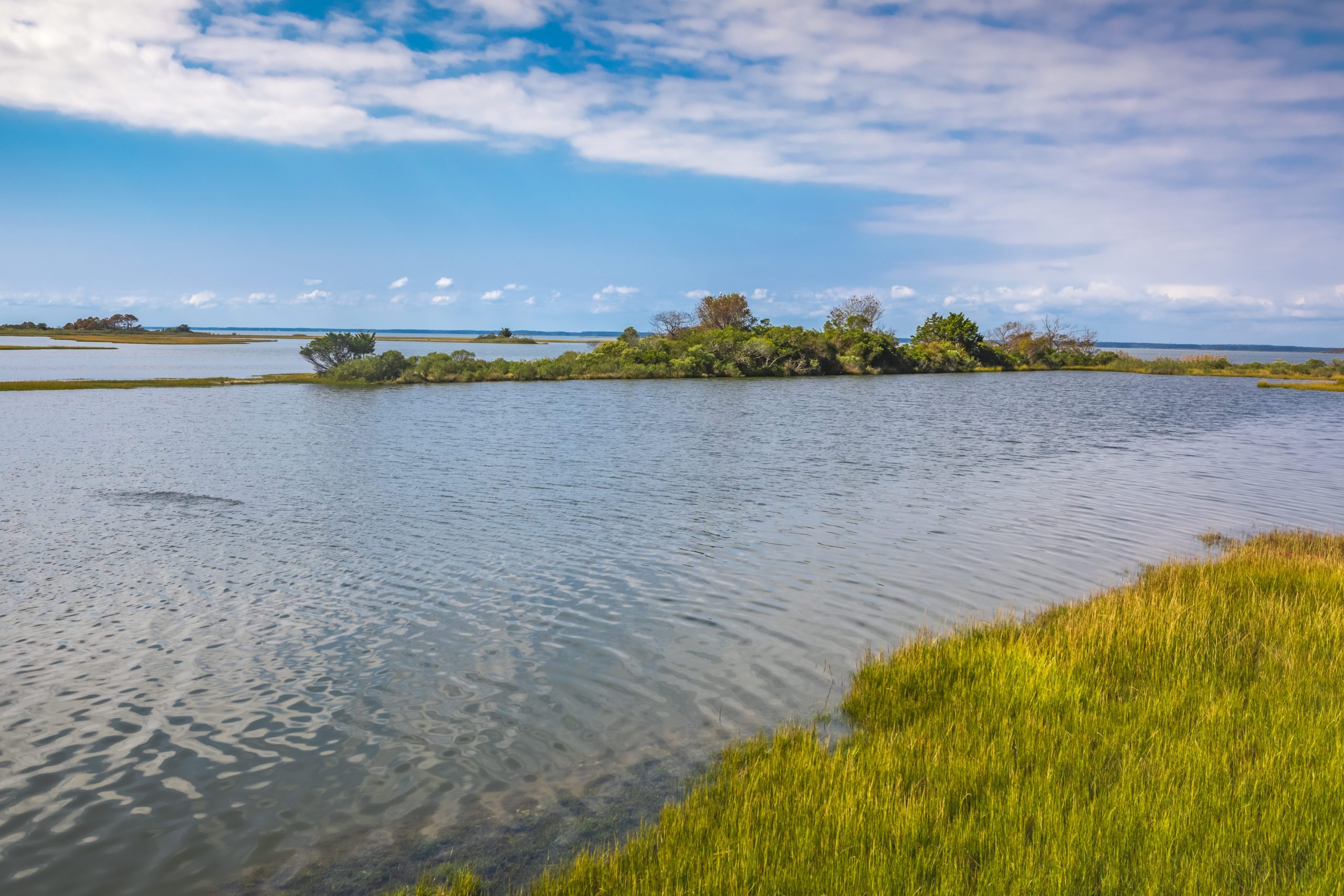 The name of the massive Delmarva Peninsula is actually a portmanteau, a combination of Delaware, Maryland, and Virginia. For our purposes, we’ll focus on the Eastern Shore of Maryland, complete with loblolly pine forests, swaths of teeming wetlands, and interspersed with the graceful beauty of waterfront estates. With colorful fishing villages and small numbers of residents, nature shines in this part of the peninsula, known for its independent streak. Enjoy the serenity of quiet salt marshes, sweeping fields, and the enormous bounty of the Chesapeake Bay. The Delmarva Peninsula’s nearly 200-mile length offers unmatched views. Check out more of the most colorful cities in the world. 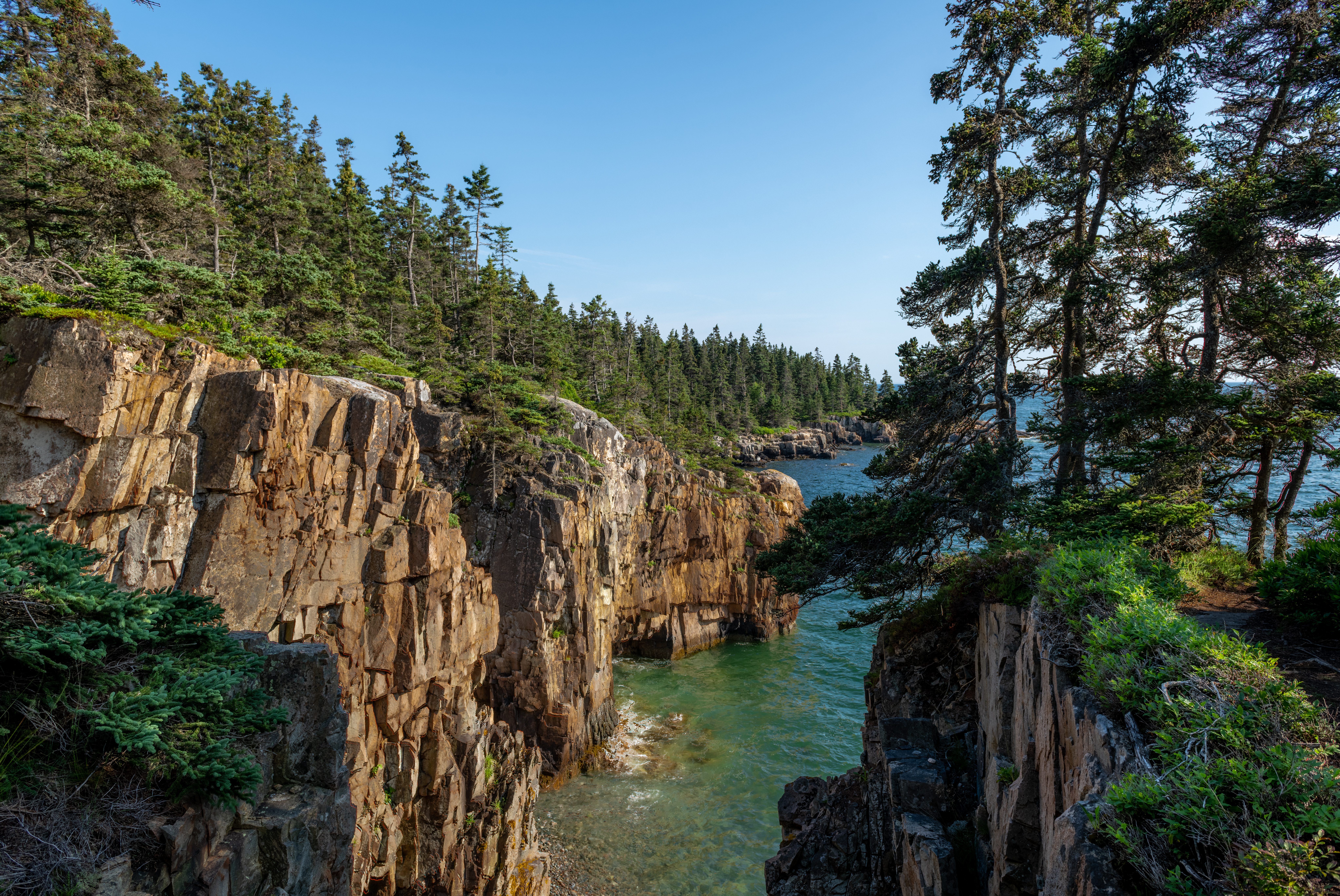 The Shoodic Peninsula, “Down East” near Bar Harbor, boasts some of Maine’s most spectacular ocean views. Home to about 5 percent of Acadia National Park, this gorgeous 2,000-plus-acre area includes glistening granite shorelines that warmly greet the tumultuous Atlantic Ocean. The peninsula is actually the only region of Acadia National Park that’s on the mainland, though the region looks especially attractive during social-distancing times, as only a small fraction of Acadia’s visitors ever venture far enough to get to Shoodic. Prepare for mountain views from Shoodic Point, ancient lava flows, and the glorious waves of the north Atlantic Ocean. Head here for one of the best national park road trips you can take all year long. 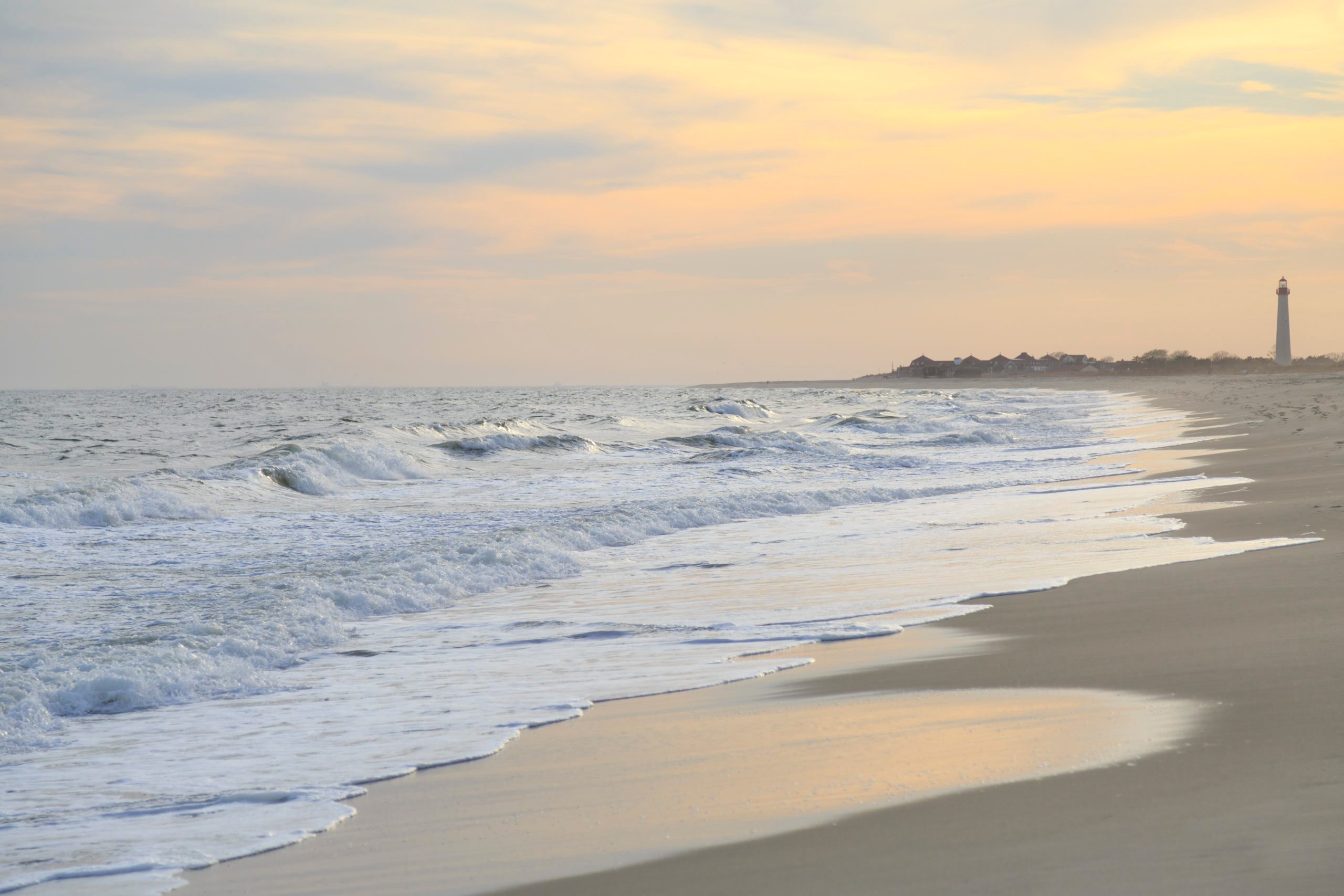 The warm waters of New Jersey’s original resort destination have long welcomed visitors to their scenic shores. Both the name of the peninsula and its southern-most destination, Cape May is famed for its gorgeous examples of Victorian architecture and moody, dark-blue Atlantic waters. On the seaside, each beach town has its own vibe, but all come complete with ocean views and preserved wetlands. Be sure to check out the Cape May Lighthouse and the colorful plumage of the more than 400 species of birds in the area, which make it a premier birding spot. If this sounds right up your alley, check out these other beautiful seaside towns in America. 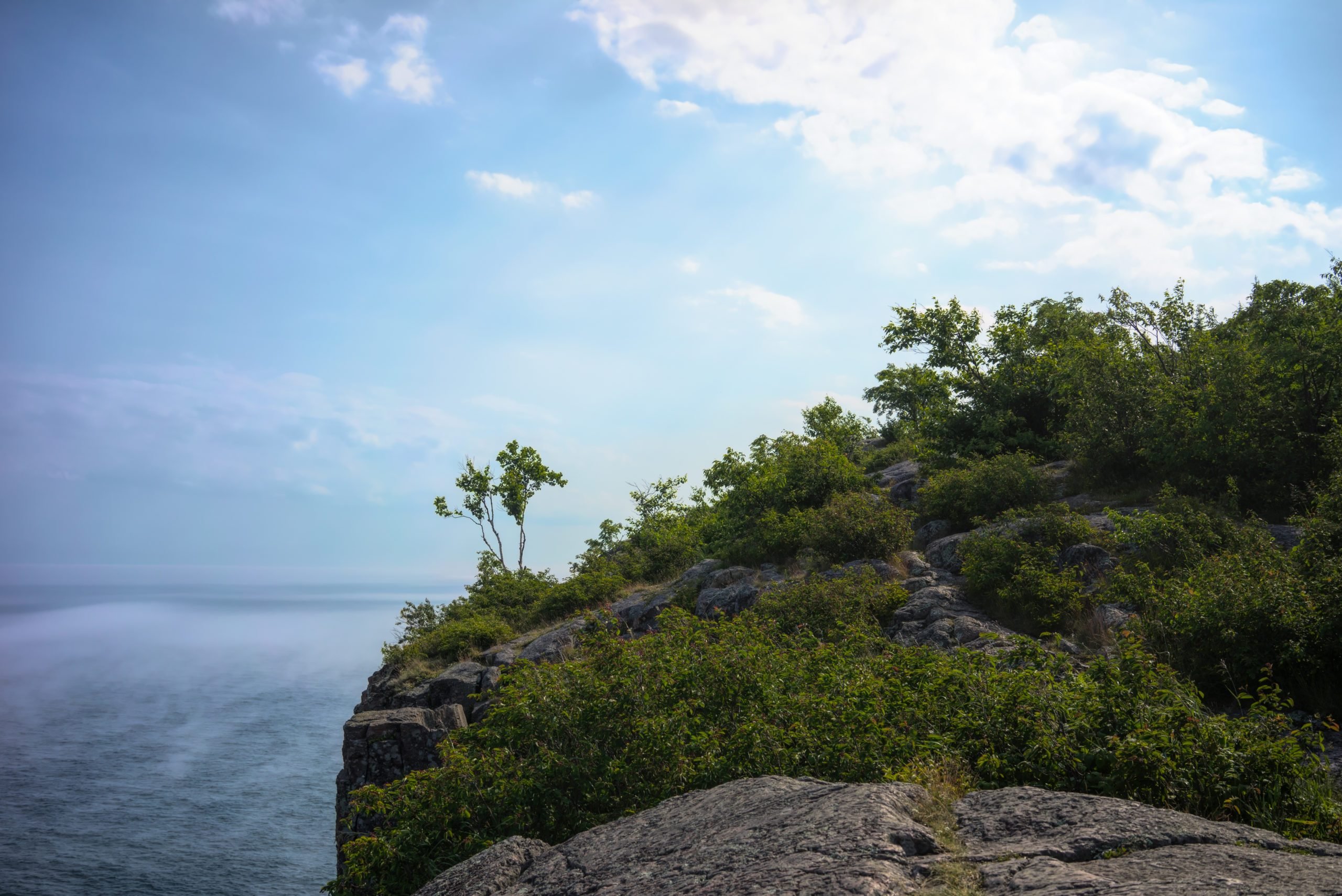 Ensconced within Voyageurs National Park, one of the most peaceful places on Earth, is Kabetogama Peninsula. This stunningly beautiful region straddles the border between the North Star state and Canada. Serene cerulean lake waters divide dense forests of birch, pine, fir, aspen, and spruce. The Kabetogama Peninsula is the heart of Voyageurs National Park and is surrounded by three large lakes, Rainy, Kabetogama, and Namakan. It is best explored by boat, gliding through the pristine glacial lakes, with views of glacier-carved cliffs and the feel of the warm embrace of nature. Pro tip: Consider a fall visit to see the otherworldly beauty of the leaves changing up north.

California, here we come! Monterey, located on the Golden State’s famous Pacific Coast Highway, welcomes visitors with its million-dollar vistas. Highway 1 winds along the stunning, rocky shoreline of California’s central coast. Get all the Big Little Lies vibes with the world-renowned view of the famed Monterey Bridge. Expect to see pristine golf courses, hills blanketed with wildflowers, the sun setting over white sand beaches, and crashing waves along the rocky cliffs. The Monterey Peninsula is also home to Carmel-by-the-Sea, one of the most romantic small towns in America. 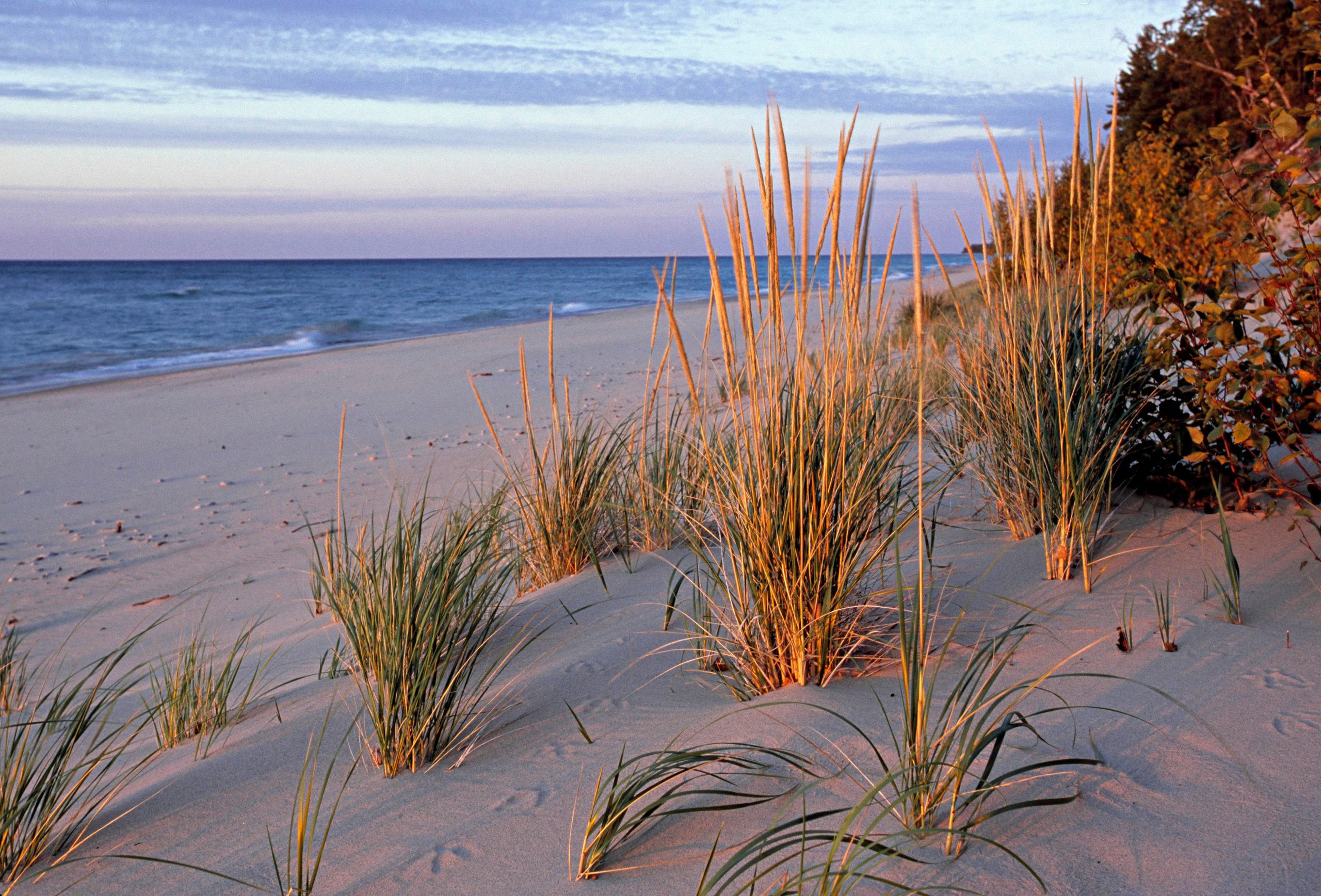 Since the state of Michigan boasts more freshwater coastline than any other except Alaska and is itself comprised of two peninsulas, the upper and the lower, it makes sense to include an upper-peninsula example as well. Keweenaw Peninsula, famous for the largest copper boom in history, is also the state’s northernmost point along the sweeping shores of Lake Superior. Known as Copper Country, this area is actually home to some of the oldest exposed rock in the world, one of two National Historic Parks in the country, lighthouses, waterfalls, and more. For the ultimate way to experience the beautiful views, take a seaplane ride from Houghton to the nearby Isle Royale National Park, one of the most remote and least visited protected areas in the United States. For more travel inspiration, check out these 10 practically secret national parks. 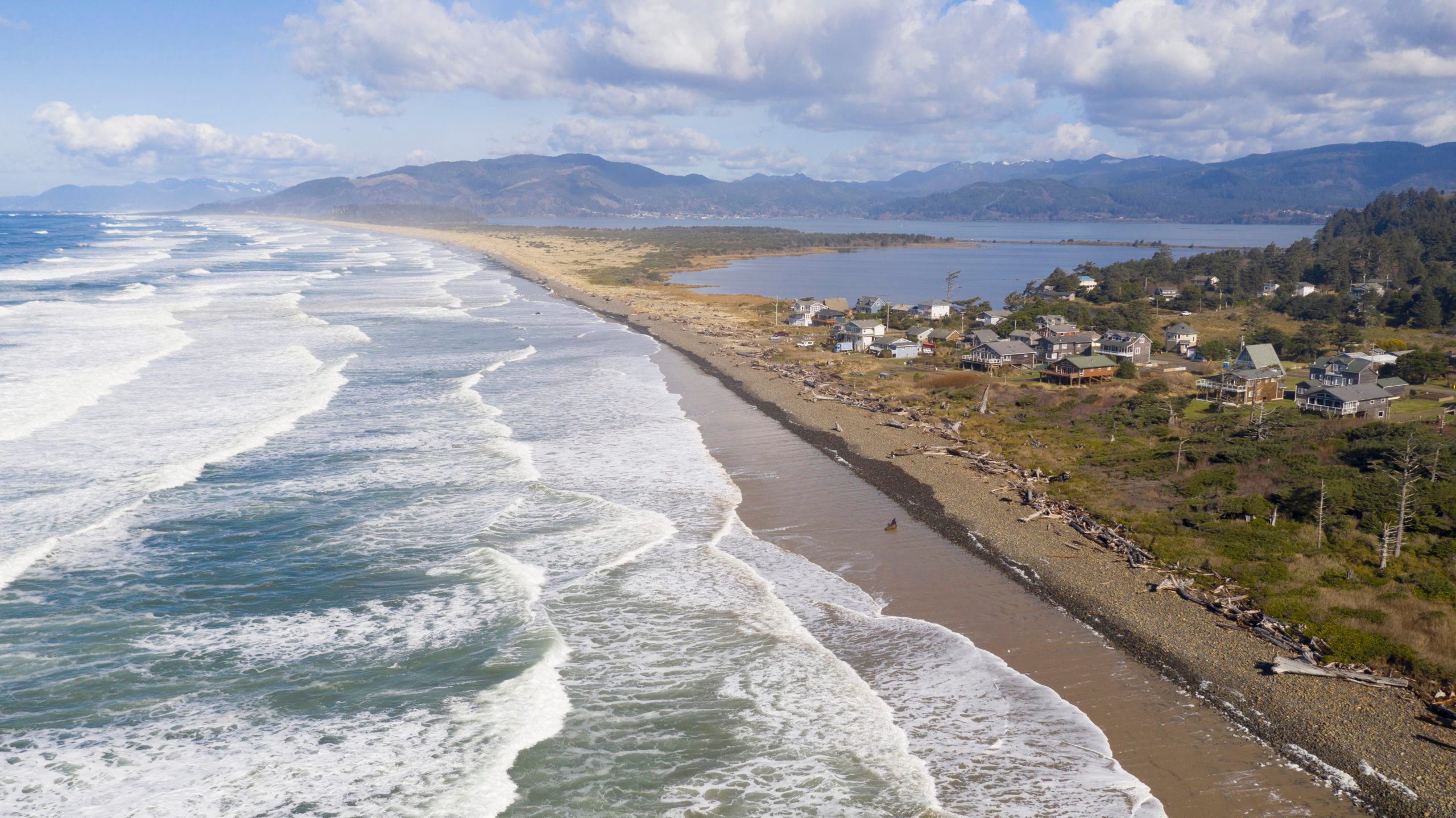 Oregon’s beautiful and rugged northern shores are home to a tiny peninsula named Bayocean that was once a small resort town of the same name. These days, a lone, simple, wooden sign marks the spot where the eponymous town once stood. Now considered a ghost town lost to the waves, this area has been preserved within the Bayocean Peninsula County Park. With gorgeous views of the Tillamook Bay and Pacific Ocean, this small spit of land boasts big beauty in its seven-mile length. Be on the lookout for the beautiful driftwood the coast is known for, just without all the visitors, as this section remains a hidden gem. Love this idea? Find out about more of the best-kept secrets in every state.

Katy Spratte Joyce
Katy is a freelance food, travel , and business writer who splits her time between her Minnesotan homeland and her new base in Omaha, Nebraska. Besides Eating Well, she has written for Thrillist, Eater Twin Cities, Chilled Magazine, ROVA Magazine, Travel Awaits, Popular Science, Crunchbase News, Omaha Magazine, and many more print and digital publications.