15 of the Hardest Words to Spell in the English Language

The English language is full of words that seem overstuffed with unnecessary letters, feel like they should be spelled a different way, or just don't make sense. Here are some of our favorites, explained. 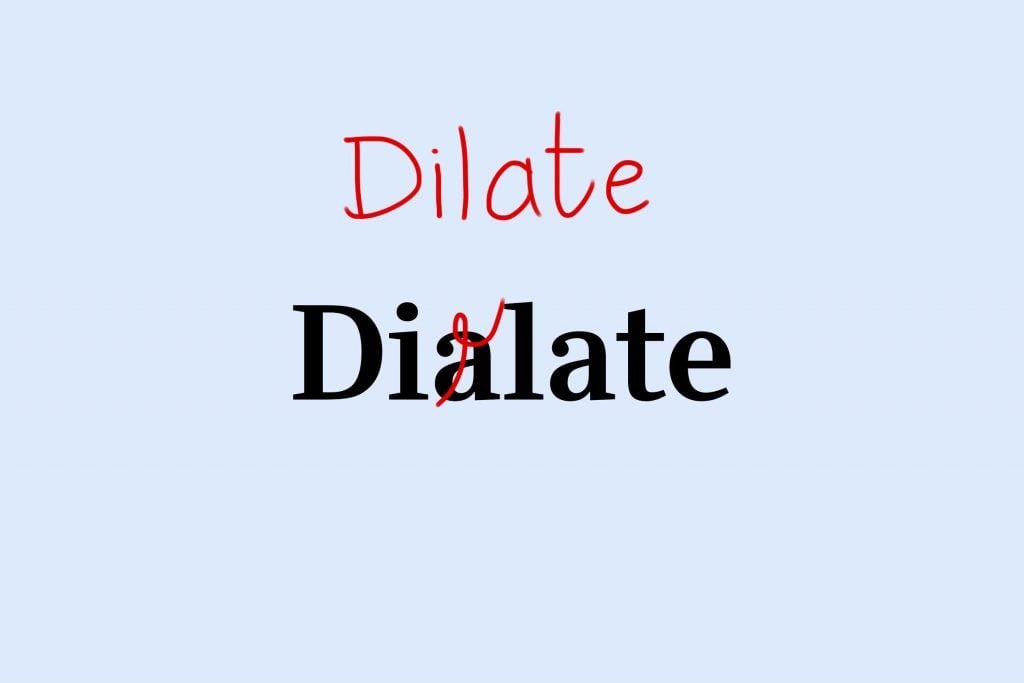 With only six letters, “dilate” really shouldn’t be one of the hard words to spell, but the way people usually pronounce it can throw spellers for a loop. Many people say “dilate” as three full syllables, “di-a-late,” leading themselves and others to add in an extra “a” while spelling it. But let’s put this easy misunderstanding to rest—there’s no such word as “dialate.” Find out some more words even smart people mispronounce. 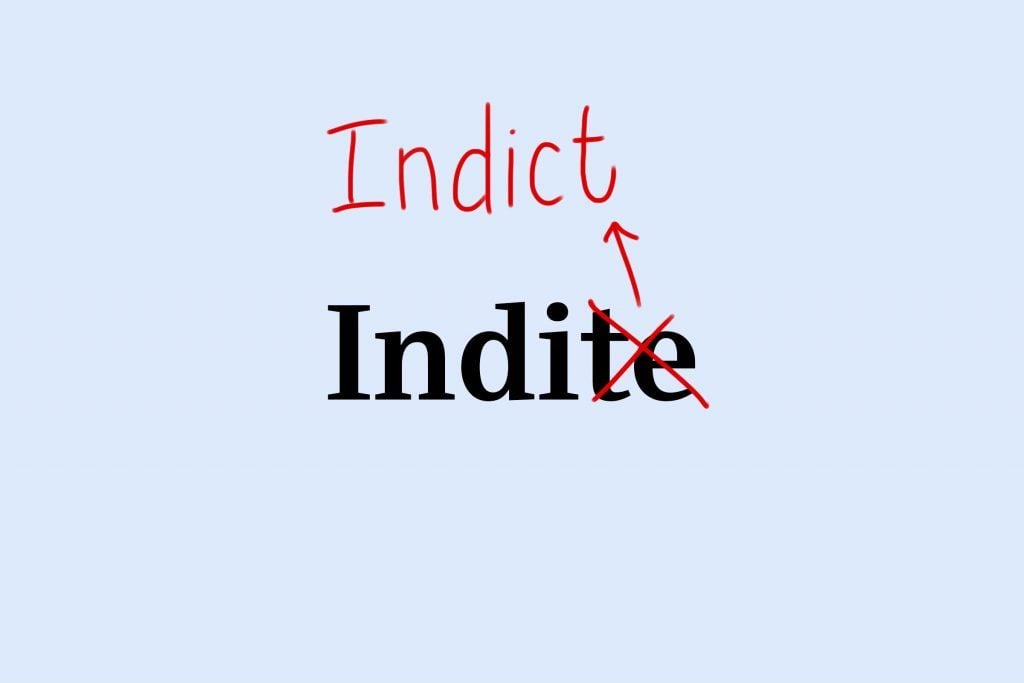 With “indict” popping up as a buzzword in today’s political climate, for better or worse, many people find themselves doing a double-take when they see it written out. Though the word is pronounced “indite,” it has a “c” in it! The legal term, whose first use dates back to around 1620, is a Latin variation on an earlier word that was spelled “indite.” To make things even more confusing, “indite” is actually still a word; it means to write or compose. 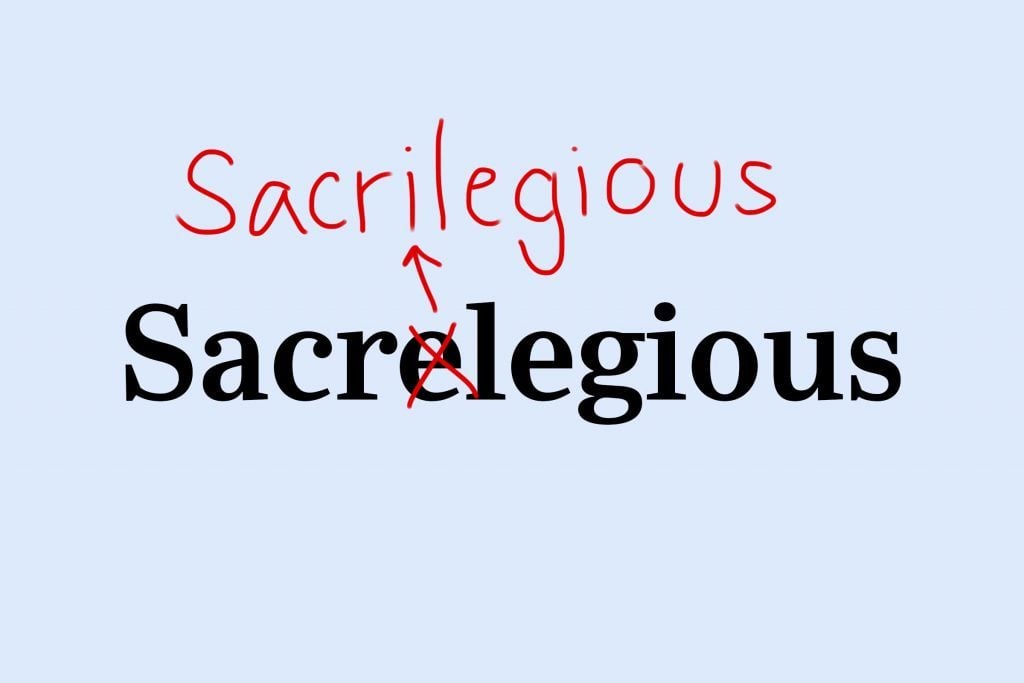 A “sacrilegious” act is disrespectful to something of religious significance, so it makes a lot of sense to just assume without a second thought that the word is spelled “sacreligious.” But that would be too easy, now, wouldn’t it? “Sacrilegious” comes from “sacrilege,” not from “religious,” and the fact that they sound so similar is a pure linguistic coincidence. The word “sacrilege” came to be from the Latin sacri-, or “sacred,” and legere, meaning “to gather or steal.” See if you know how to spell the most commonly misspelled words in every U.S. state. 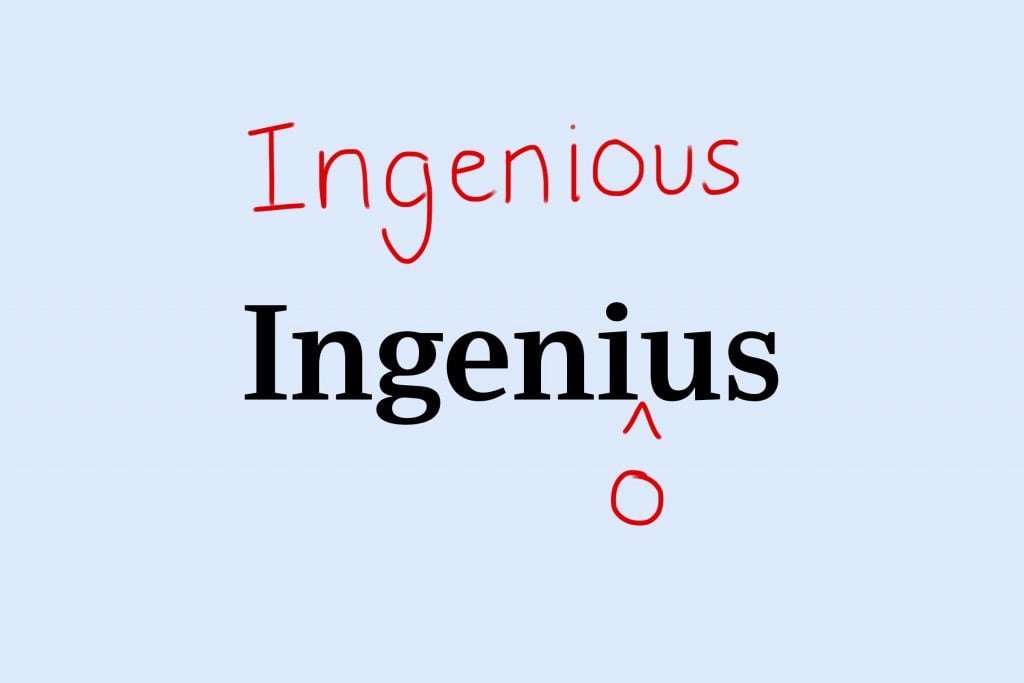 Like “sacrilegious,” “ingenious” is another word that’s so similar to another in both sound and meaning that people conclude that they’re spelled the same way. “Ingenious” means very clever and intelligent. A “genius” is a very clever, intelligent person. But, alas, the final syllables of “ingenious” are not spelled like “genius.” It dates back to a Latin word, ingeniosus, meaning “natural disposition.” 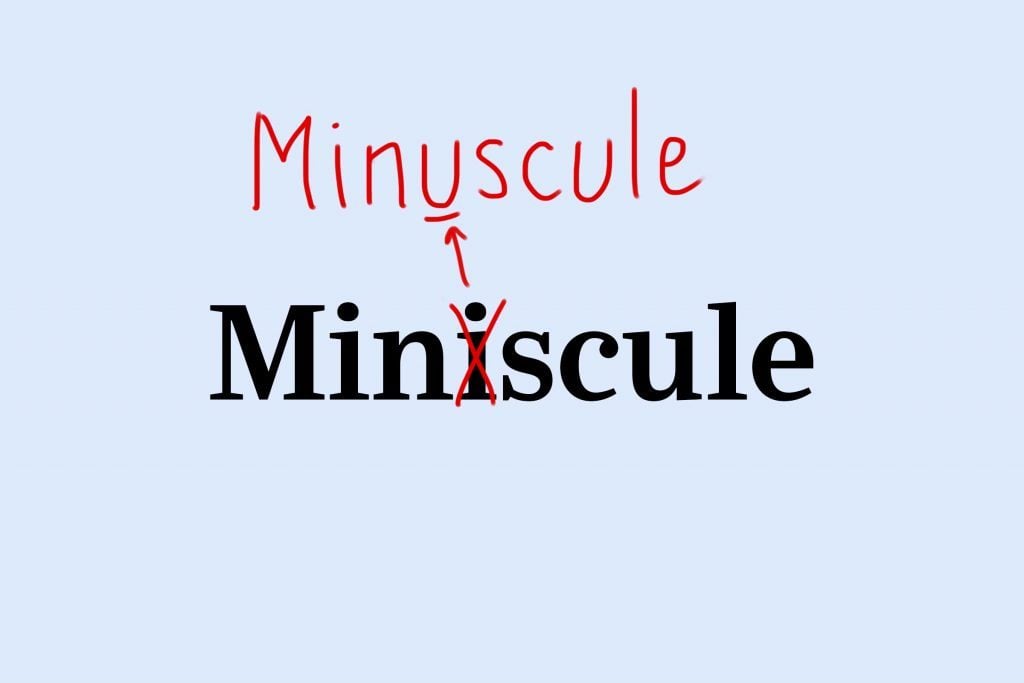 Nope, it’s not “mini-scule,” no matter how much logic would suggest. It bears no linguistic relation to “mini” or “miniature” but actually comes from the Latin minus, meaning “less.” Luckily, there’s a trick to help you remember how to spell “minuscule”—and these other 15 commonly misspelled words. 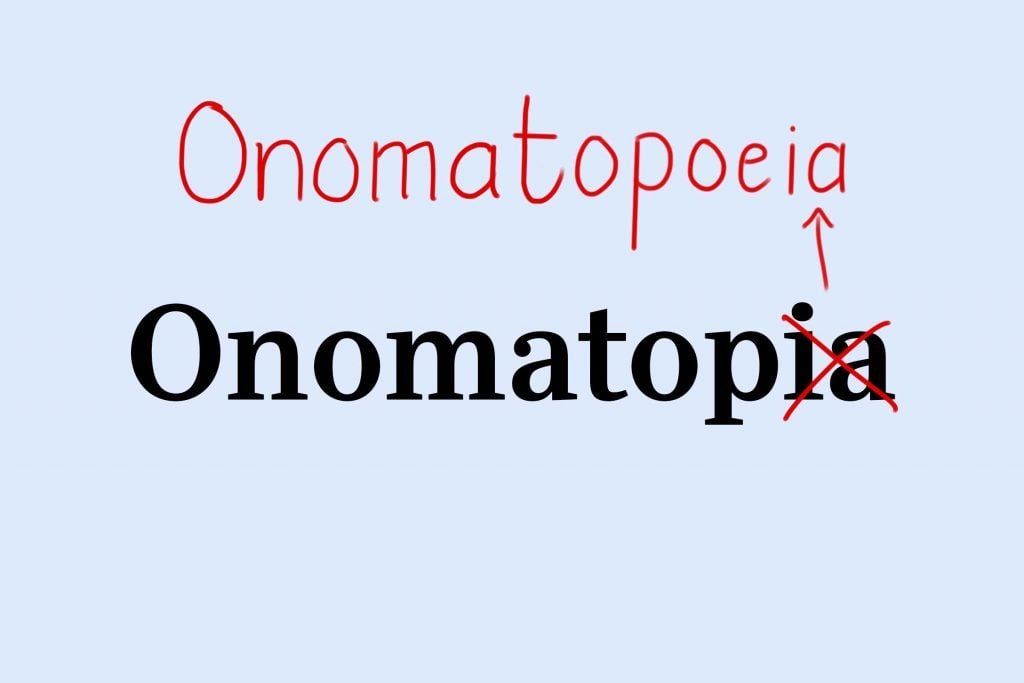 Like a punchy use of onomatopoeia—a technique where a word mimics a sound—in a comic book, this one speaks for itself. Between the eight vowels, the fact that you only really need half the letters that are there to make the “-pia” sound that the word ends with, or the fact that replacing the “t” with an “n,” and saying “onomanopoeia,” rolls off the tongue slightly better, this is easily one of English’s hard words to spell. Here are some more of the hardest words to pronounce in English. 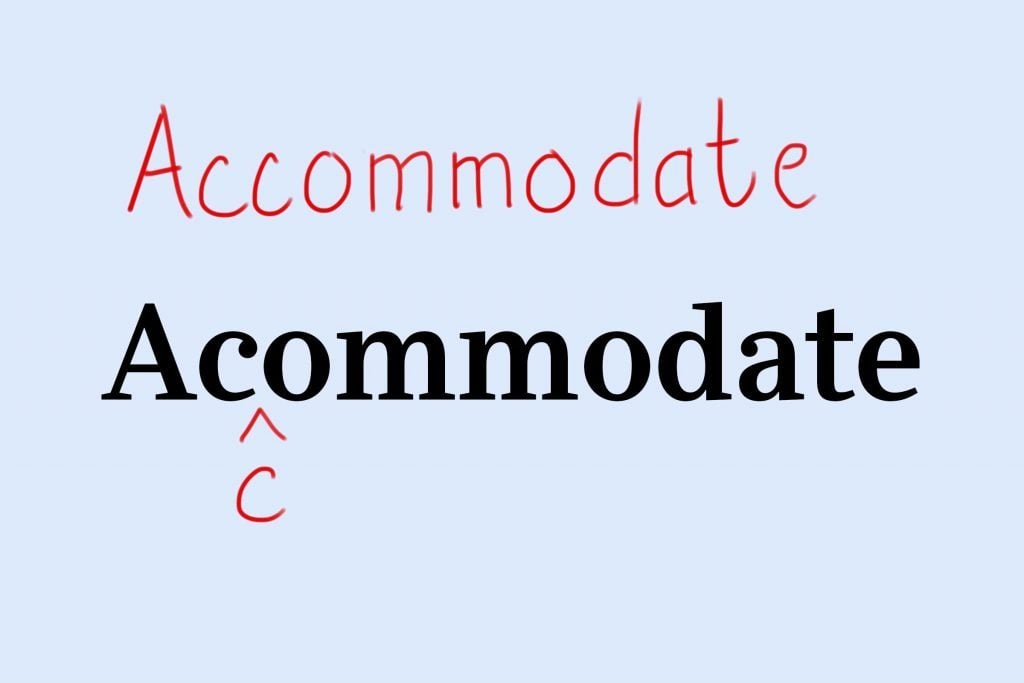 Words with double letters are already going to be confusing; knowing which letters you double in words like “necessary,” “embarrassing,” and “millennium” is no small feat. “Accommodate” in particular can be tricky to remember since it follows a different rule from “recommend,” another word where the c’s and m’s can be sources of confusion. While “recommend” only has one “c,” “accommodate” has two of both consonants. Not to mention, “accommodate”‘s second “o” doesn’t really make an “o” sound; you could certainly see an “a” or an “e” going in that spot, no problem. Check out these palindrome words you’ve never thought of. 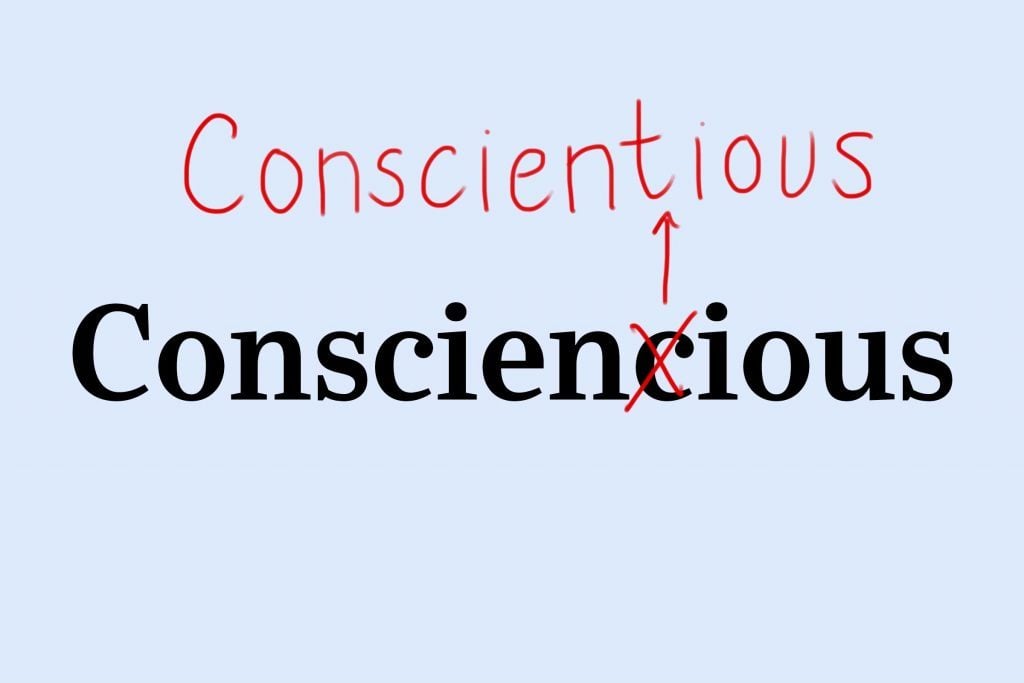 “Conscious” and “conscience” are tricky enough to spell. Take the first eight letters of “conscience,” pronounce them differently, and add another “sh” sound created by different letters, and you’ve got a doozy of a word for “moral and principled.” For a real test of your spelling skills, see if you can pass this quiz of 4th-grade spelling words. 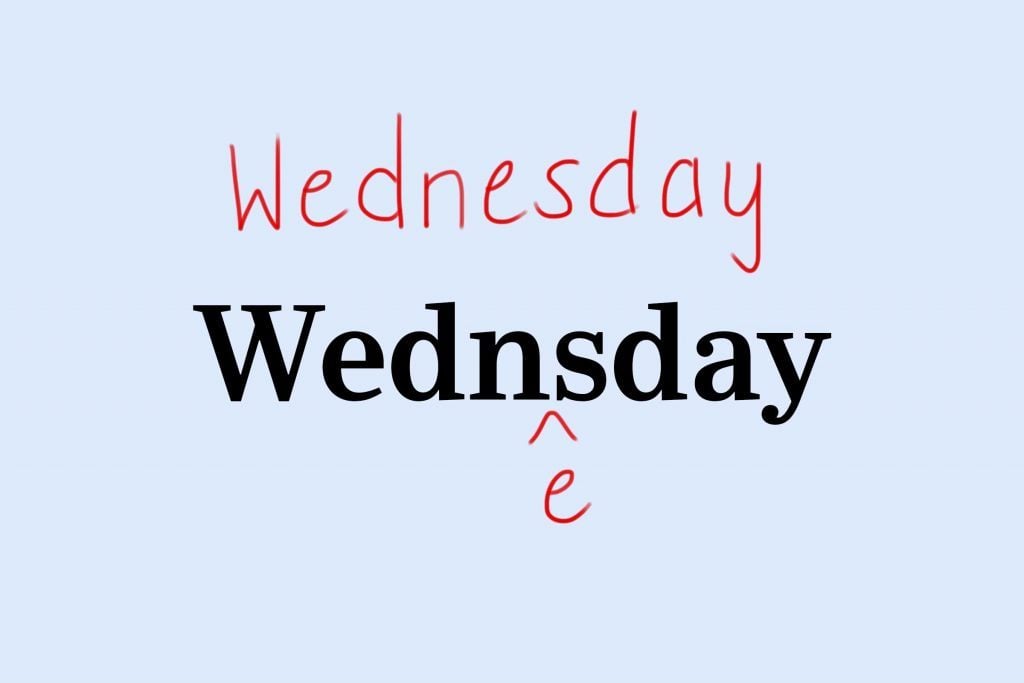 Native English spellers have gotten used to the spelling of “Wednesday,” but that doesn’t mean it isn’t still very, very strange when you think about it. What is that first “d” doing there?! Well, many English names for weekdays come from the names of old Germanic deities. Wednesday was named after the Norse god Woden, better known, at least to comic book fans, as Odin. (We have his hammer-wielding son Thor to thank for Thursday!) “Wednesday” comes from the Old English “Wōdnesdæg,” or “Woden’s Day.” 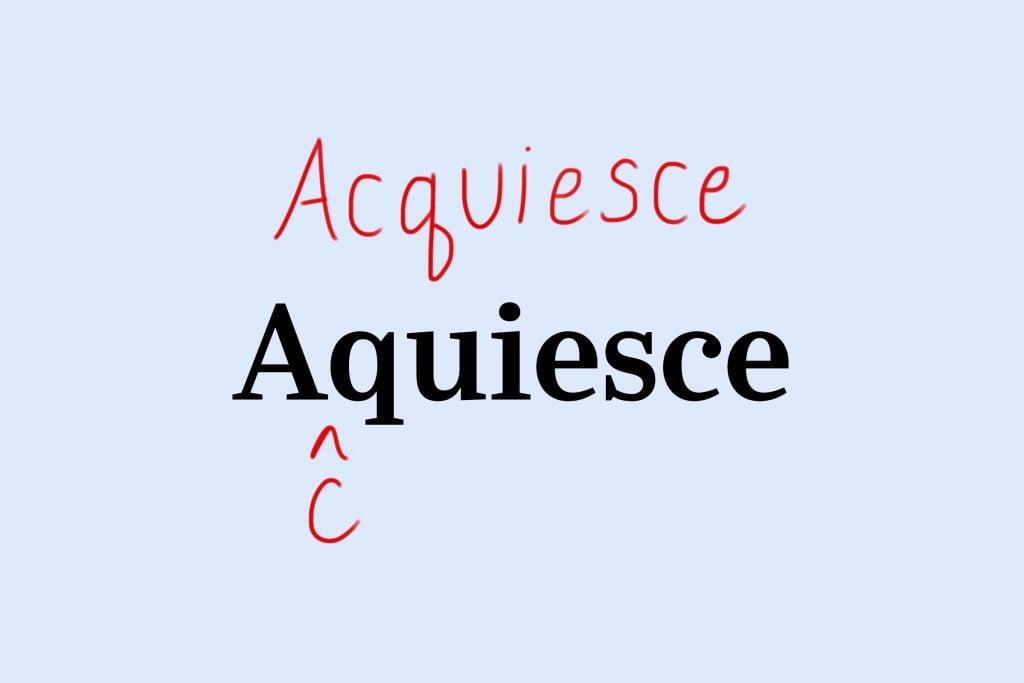 This is simply a word where if you know it, you know it. Looking quickly at this word, which means “comply or agree without question,” you might not think that that first “c” needs to be there; it isn’t in words like “aquatic” or “aquiver.” You may also be tempted to throw a double “s” on the end in lieu of the “sc,” or just write the “s” with no “c.” 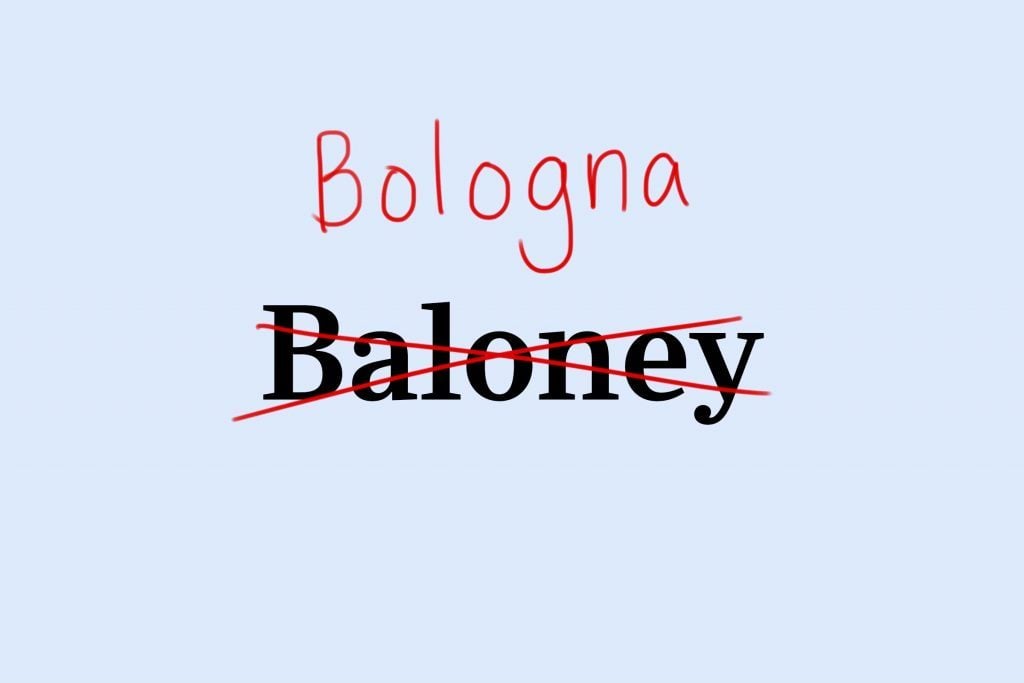 There’s a reason many meat packages spell it “baloney.” The word “bologna” derives from Bologna, Italy, since a similar (but fancier) type of sausage comes from that city. If you want to mimic this fanciness, that “-gn” at the end should be pronounced with a “yuh” sound. But the Americanized, more phonetic spelling seems to better suit thin slabs of Oscar Mayer. All of these hard words to spell are nothing compared to these insanely tough words that won the National Spelling Bee. 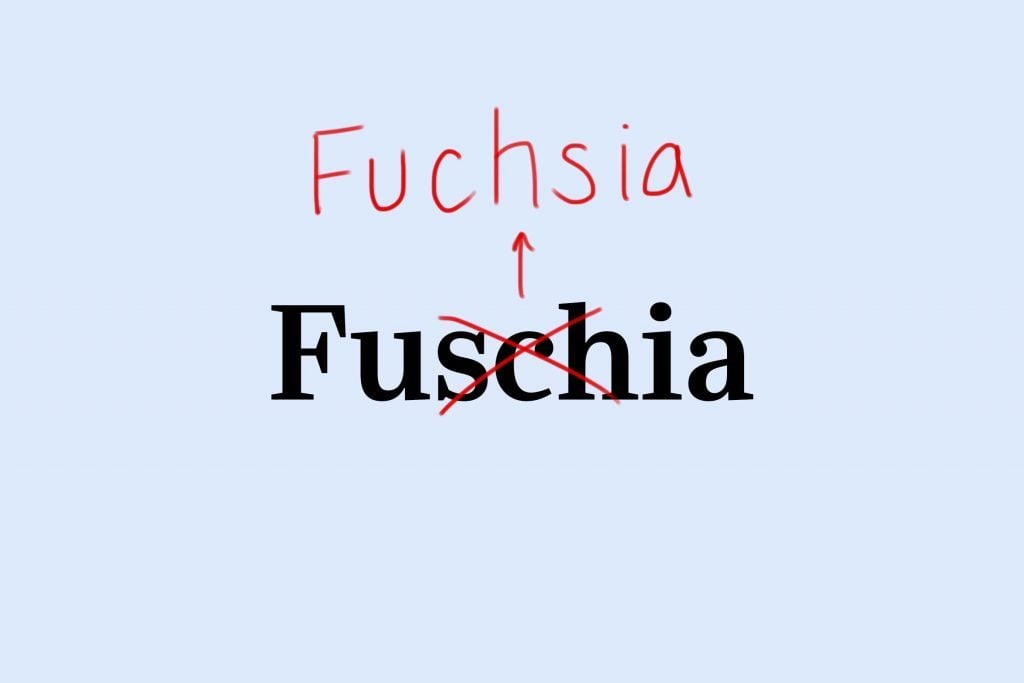 Both the pairs of letters “sc” and “sh” have been known to make the sound that starts the second syllable of “fuchsia.” But, unfortunately for anyone who likes writing about colors or plants, “fuchsia” uses neither of those pairings, instead taking all the necessary letters and jumbling them up. The plant, whose flowers give the name to the color, was named after esteemed German botanist Leonhard Fuchs. 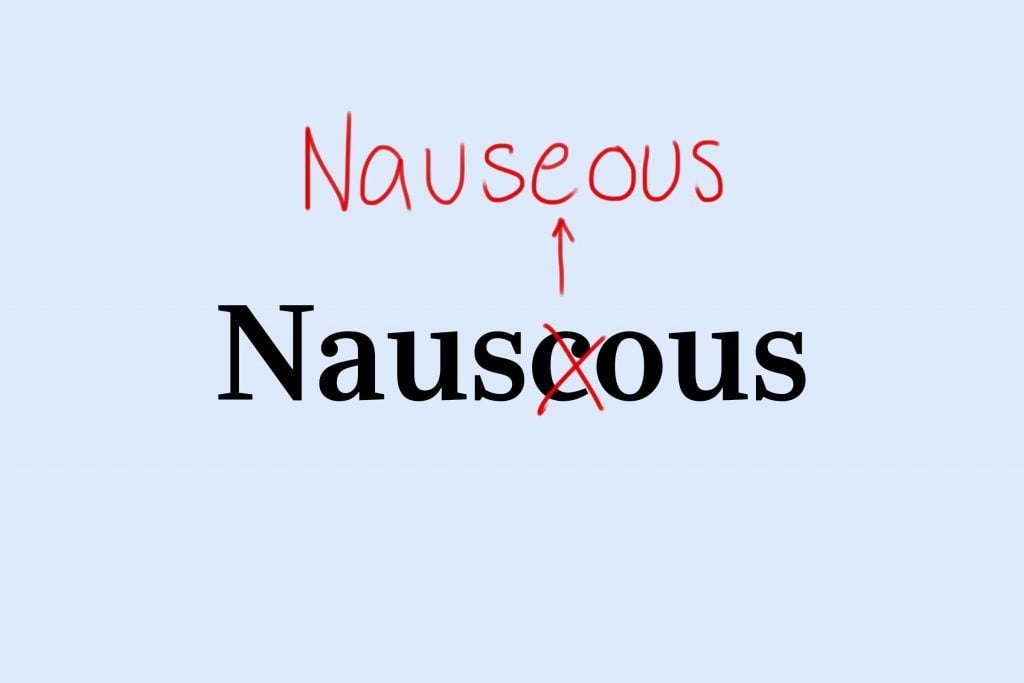 There sure are a lot of vowels in “nauseous,” and it can be tricky to remember what order they go in. Even if you’ve got them straight, you may still second-guess yourself about the consonants, too. The “sh” sound makes it sound like there should be a “c” in there somewhere, like in “conscious.” And, as if the spelling confusion weren’t enough, you’ve probably been using the word “nauseous” wrong too, but that’s a whole ‘nother story. 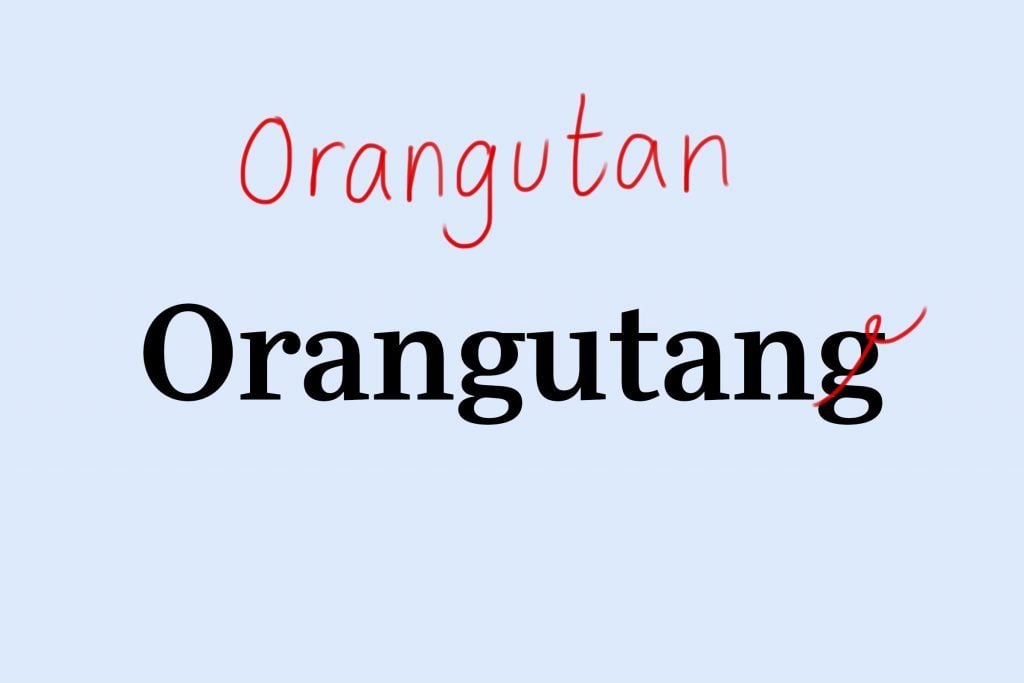 These poor Bornean primates are the subject of much linguistic confusion. According to Merriam-Webster, their name is the amalgamation of two words in the Malay pidgin language: “orang” for “man” and “hutan” for “forest.” But many people prefer pronouncing an anglicized version that adds another “g” to the end, making the word perplexing for spellers. As if that weren’t confusing enough, some variations on the spelling hyphenate the word and/or add an “o” before the “u,” creating “orang-outan.” 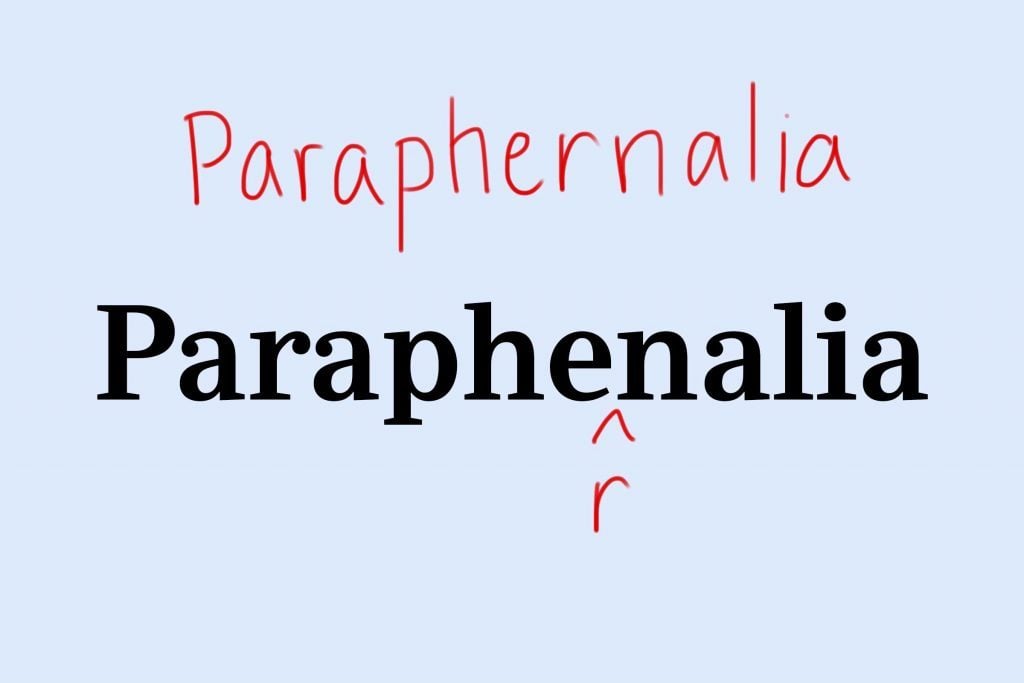 Instead of adding a letter like in the case of “orangutan,” people pronouncing this already-tricky word tend to skip over the second “r” altogether. This mouthful actually comes from a nearly identical Latin word, paraphernālia, which referred to the belongings or property of a bride-to-be, similar to a dowry. Needless to say, this word has modernized, as now it can describe everything from ski gear to musical amplifiers to cell phone chargers. Next, ease your word-cluttered mind with these simple spelling rules to remember commonly misspelled words.