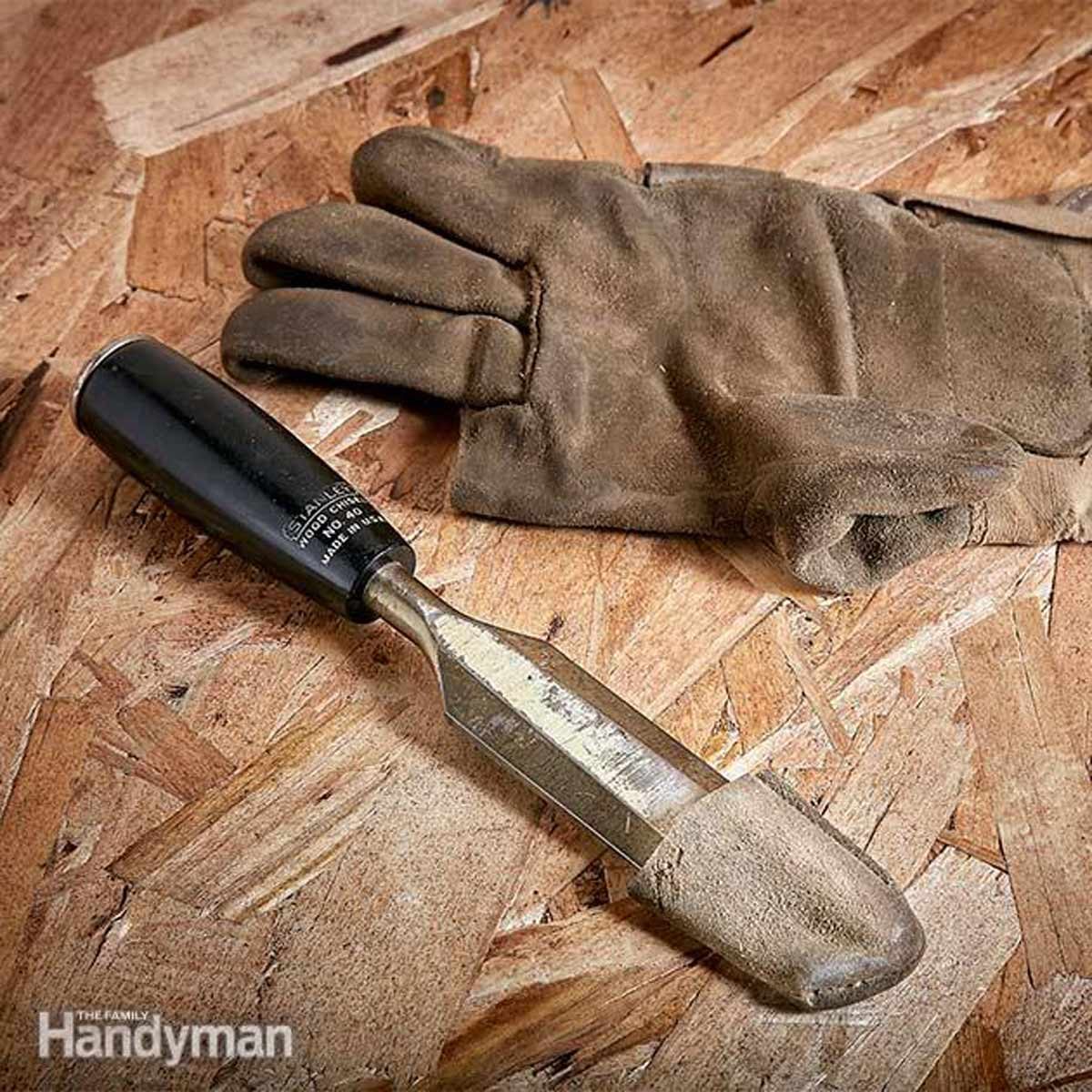 Don’t throw out your old work gloves. Cut the fingers off and you’ll find lots of uses for them. Use them to protect the tips of chisels when you need to carry them. They’re also good for softening the grip of pliers and many other applications. 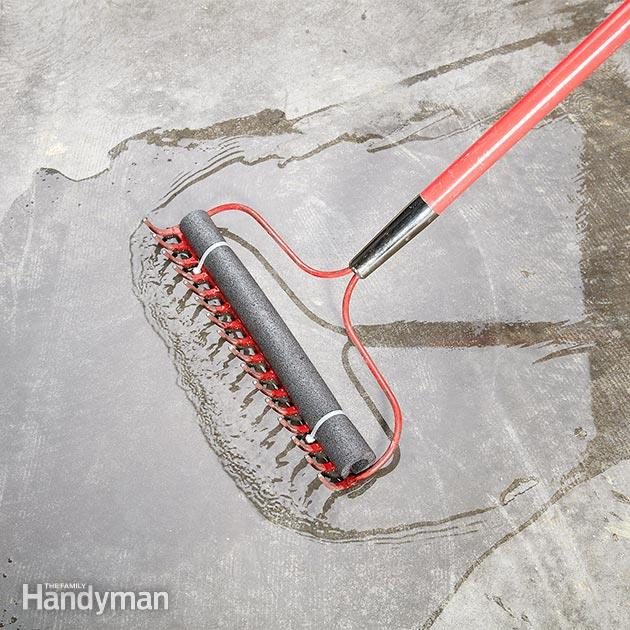 Make a squeegee from a rake

Need a squeegee in a hurry? Take a piece of pipe insulation and use a couple of cable ties to fasten it to the back of a garden rake. Works like a charm, and you don’t even have to take it off to use the rake. 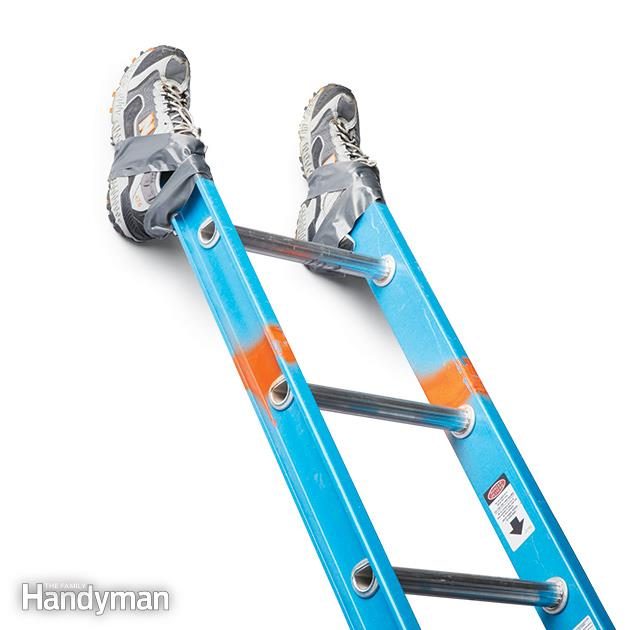 You could buy special rubber bumpers for the tops of your ladders to protect your siding or walls, but why? A pair of old sneakers (who doesn’t have some!) and a little duct tape will do the job just fine. Check out some more extraordinary uses for household staples. 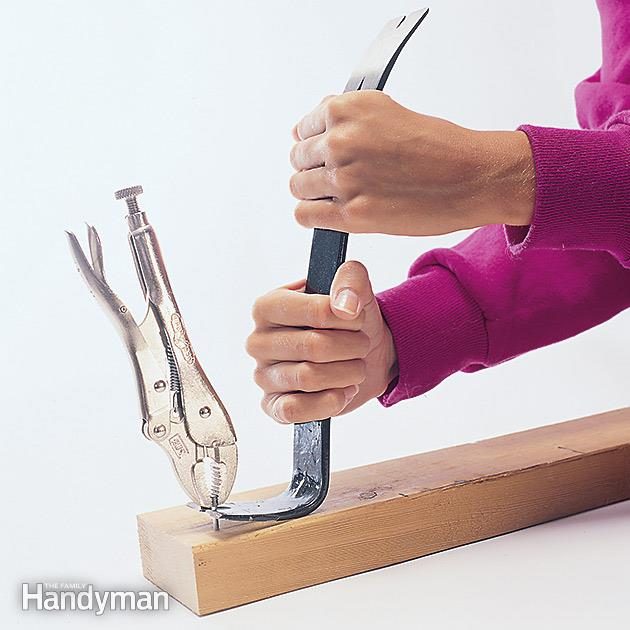 Double up on stubborn nails

Nails can be a pain to remove, especially trim nails with small heads and any nail when the head breaks off. The trick is to use two tools together: locking pliers to grab the nail shank, and a pry bar to do the pulling. 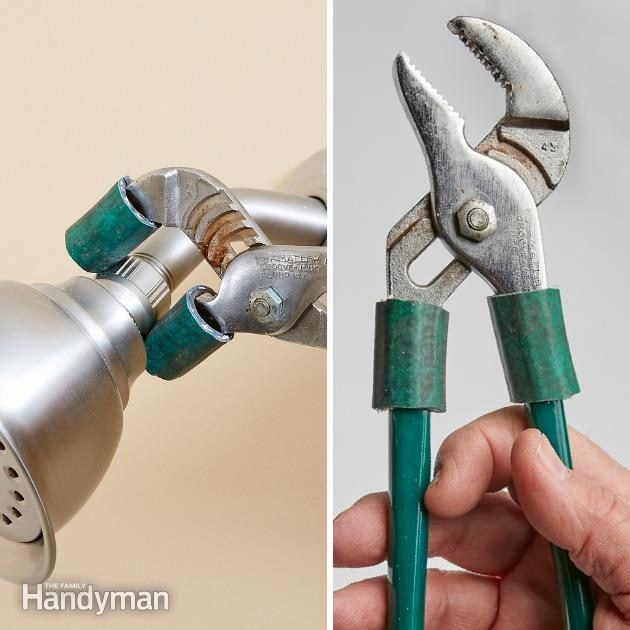 Here’s an oldie with a twist. Use pieces of garden hose or other tubing to soften the jaws of slip-joint or other pliers so you can grip plated surfaces without damage. The twist? Size them so you can slide them up the handles to keep them handy. Here are 20 more cool tool hacks to try. 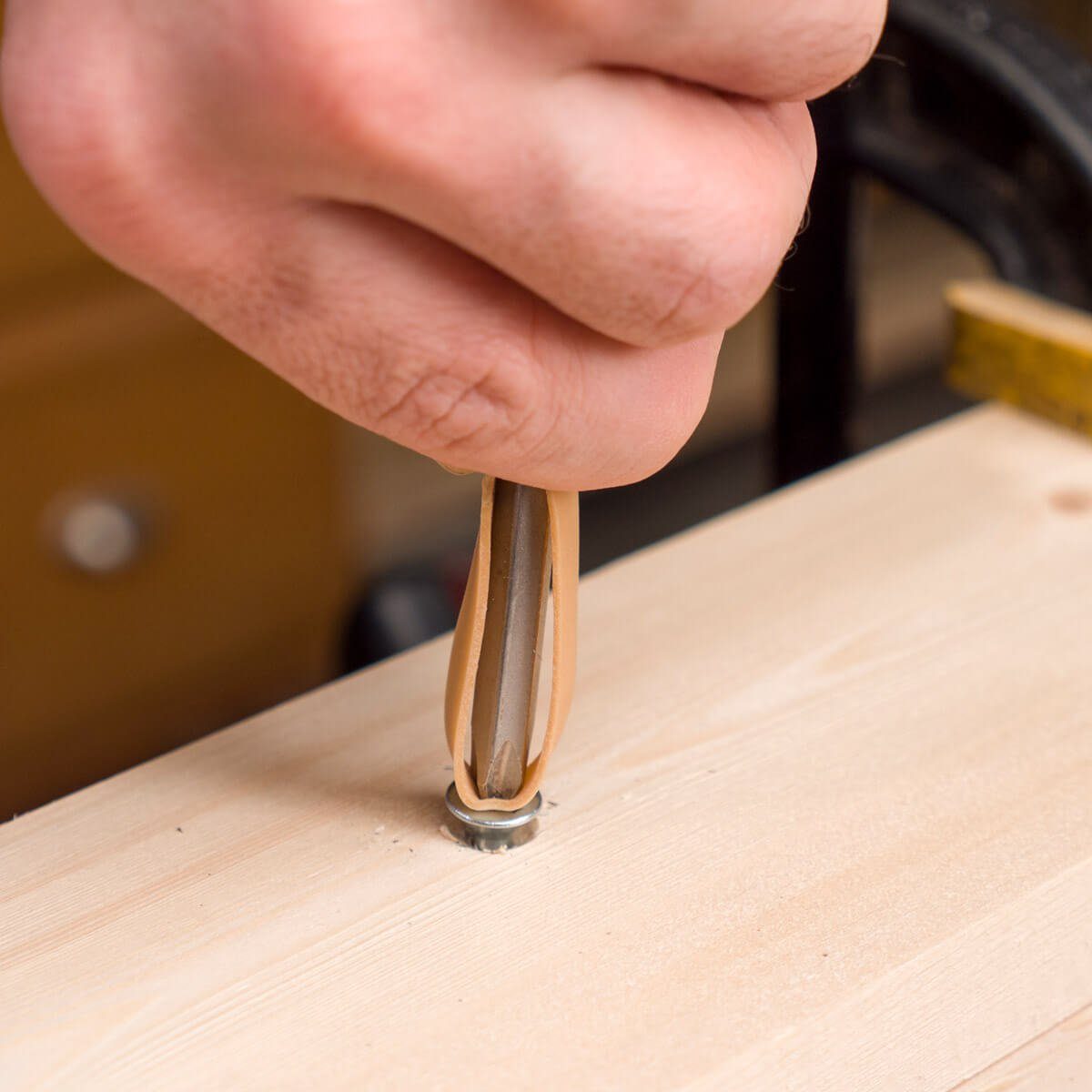 Use a rubber band to grip stripped screws

We’ve all stripped a couple of screws in our day. And it normally isn’t a big setback until you need to unscrew it, that is. So the next time you’re in this situation, try a rubber band for a screw grip—find out how. 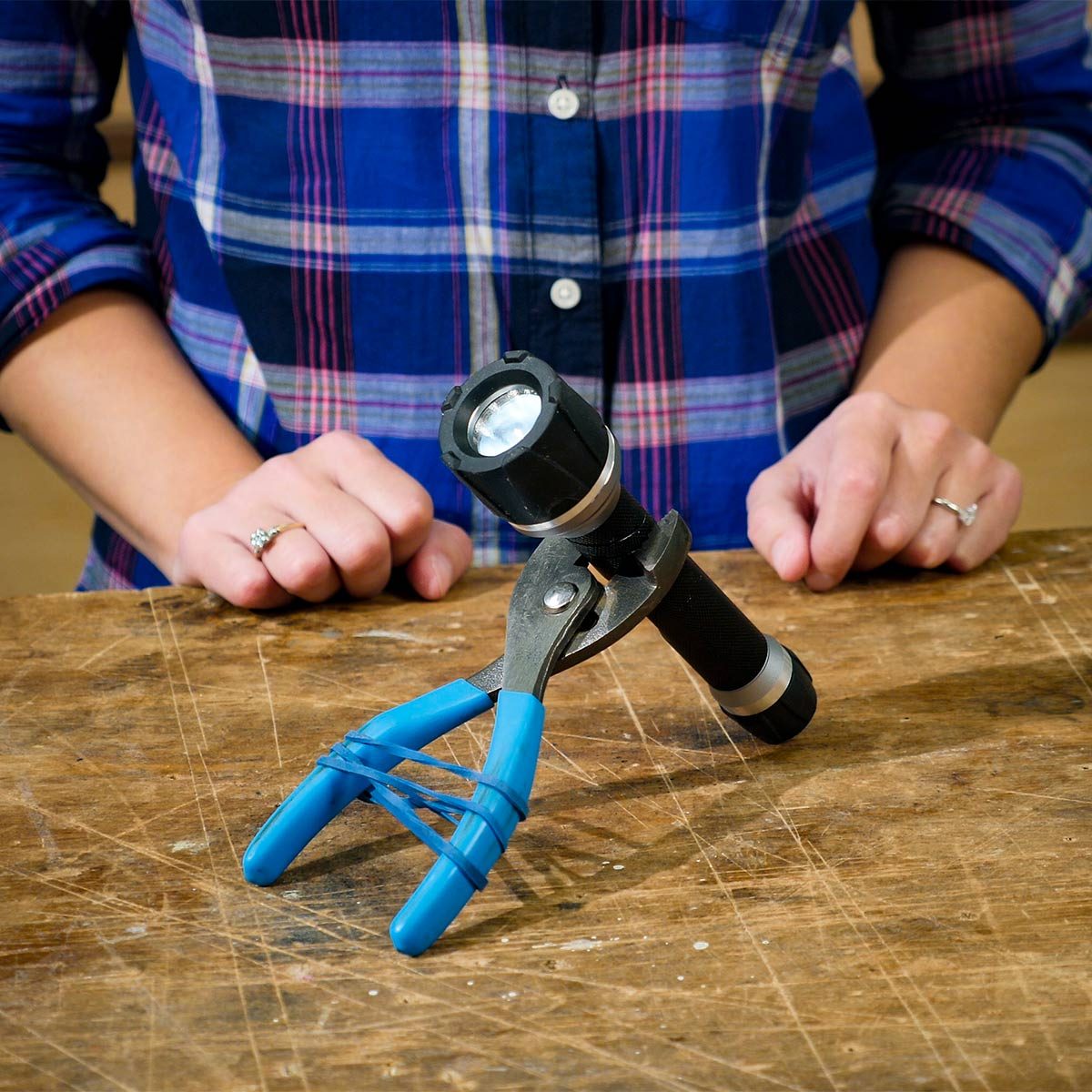 Make a hands-free light in a snap with a flashlight, a pair of pliers and a rubber band. Place the flashlight in the jaws of the pliers; then wrap a rubber band around the handles of the pliers. That’s it! Point the light wherever you need it. Check out a more detailed description of how to pull off this hack here. 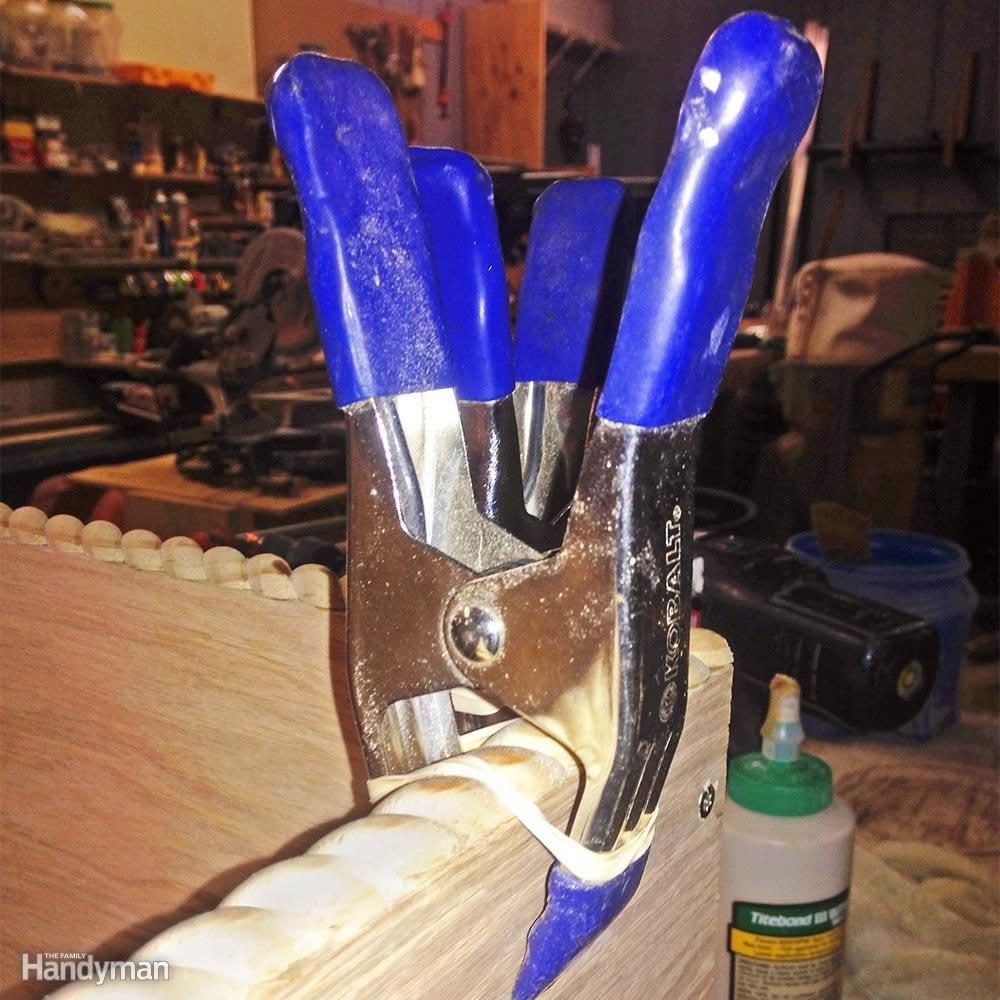 You can buy special woodworking clamps to hold hardwood edging in place until the glue sets, but they’re expensive and you won’t use them often. Instead of buying specialty clamps, you can modify some of your spring clamps instead. Grab a few rubber bands and presto—instant edge clamps. 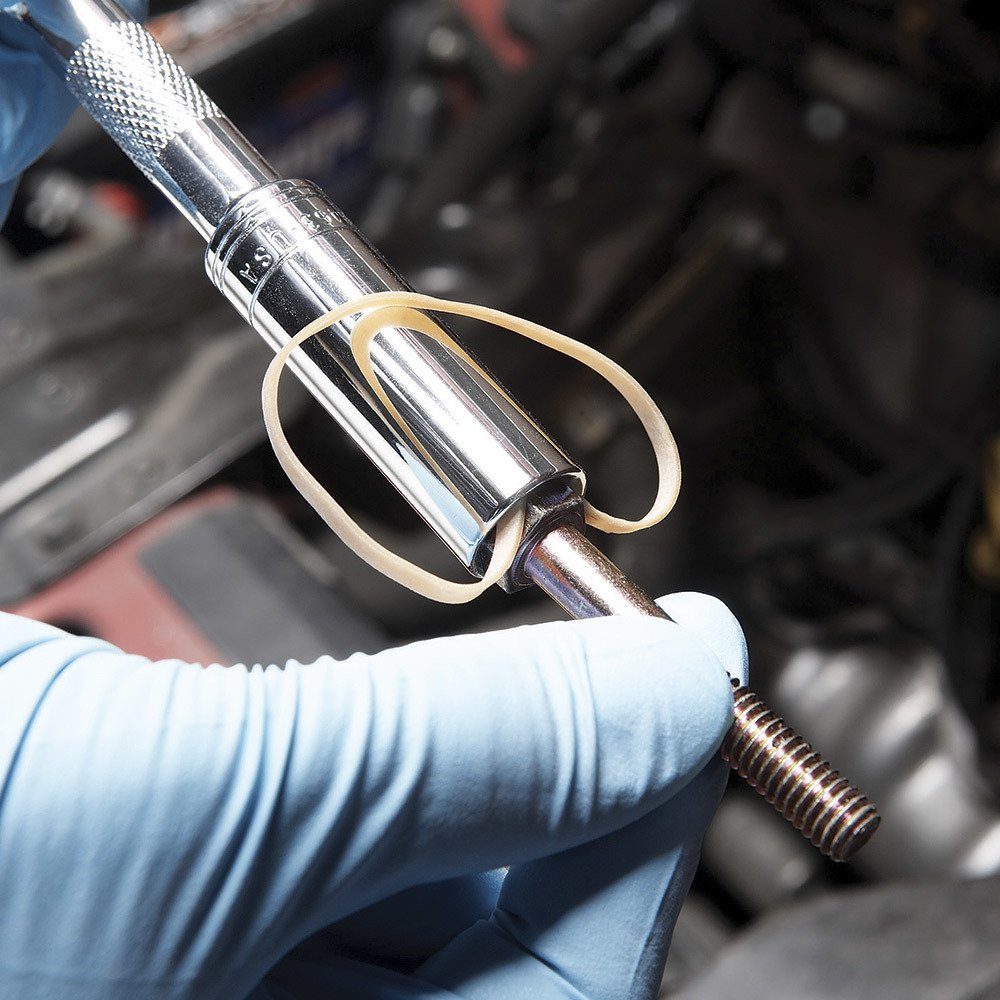 Mechanics often use special magnetic inserts in sockets to prevent the bolt from falling out while they try to thread it into a tight spot. You don’t need to waste money on those gadgets. Simply cut a rubber band into strips and lay a strip across the opening of the socket. Then insert the bolt head. The rubber band will wedge the bolt head in the socket, allowing you to start threading without losing the bolt. Watch out for these things you should never, ever say while DIYing. 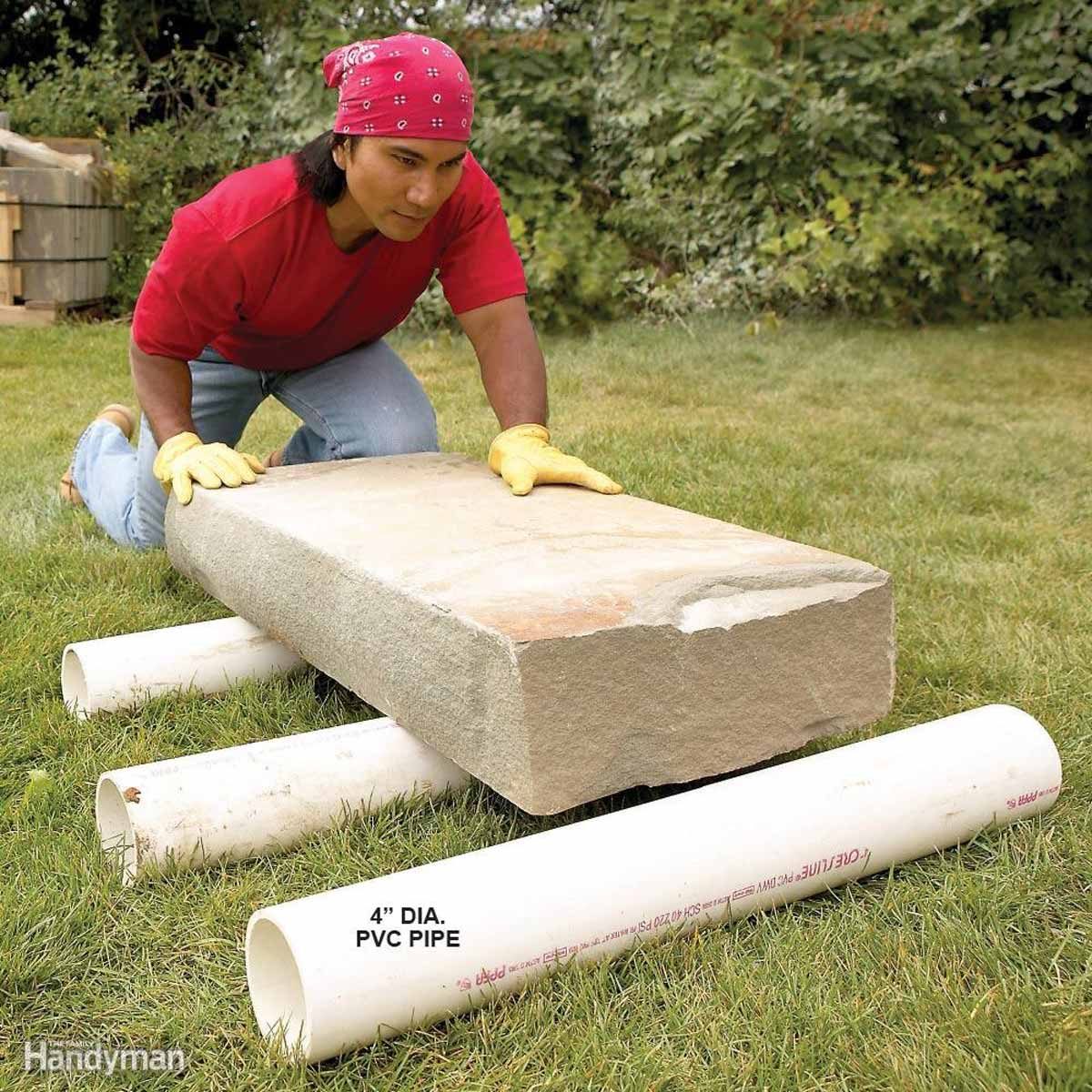 You’d be amazed at how easy it is to move heavy, awkward objects with three pieces of PVC pipe. Move playhouses, yard sheds, empty hot tubs and rocks weighing well over a ton with this trick. Use 4-in.-diameter ‘Schedule 40’ PVC, which is available from home centers. Here’s how to do it:

This technique works best on relatively flat ground. On mild slopes, you’ll need a helper to shift pipes while you stabilize the load. Don’t use this method on steeper slopes. 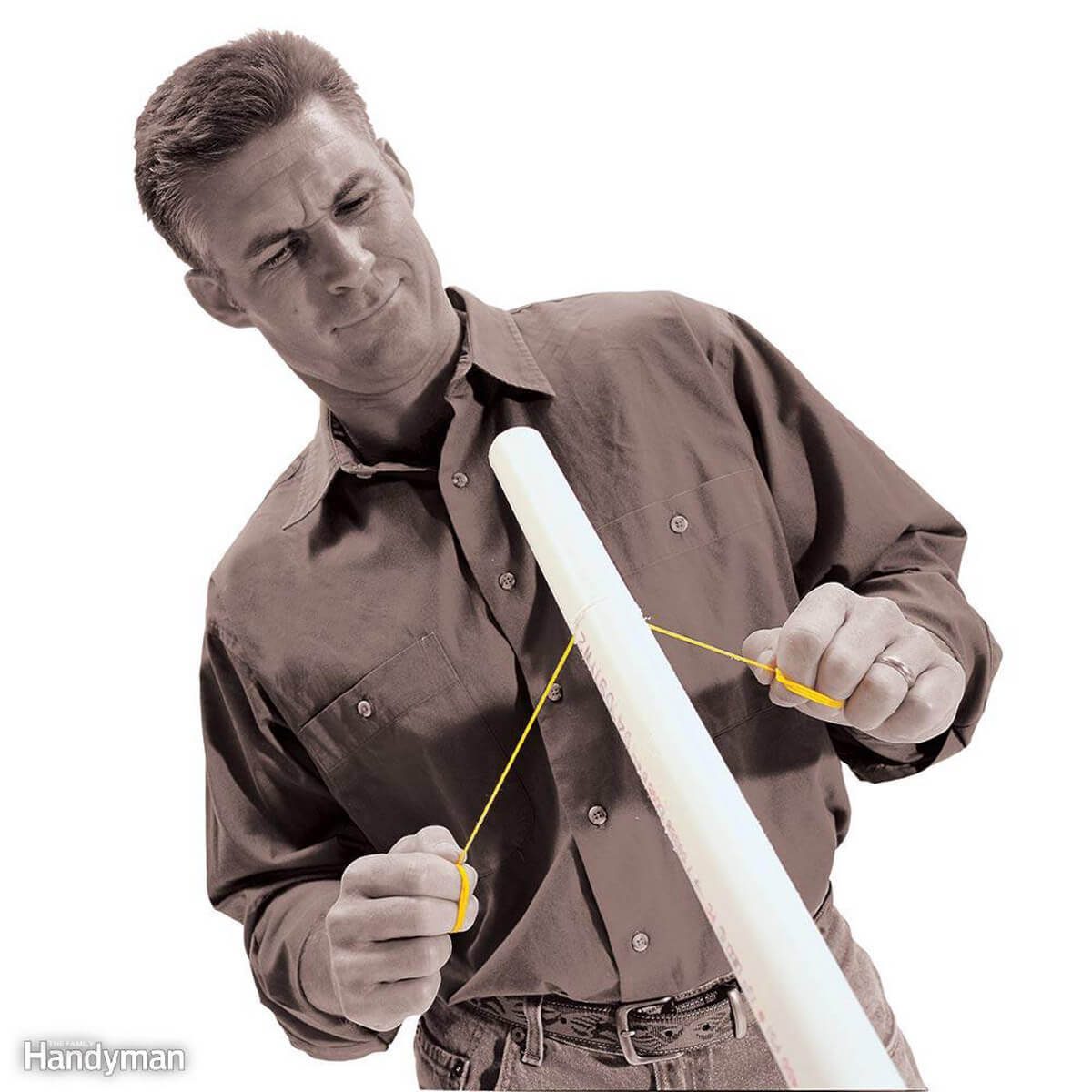 Amaze your friends and mystify your neighbors by cutting PVC pipe with a string. It’s a great trick to know if you have to cut pipe that’s buried in a wall or some other tight spot. We used a mason’s line to saw through 2″ PVC pipe in less than a minute. Check out more brilliant PVC hacks everyone should know. 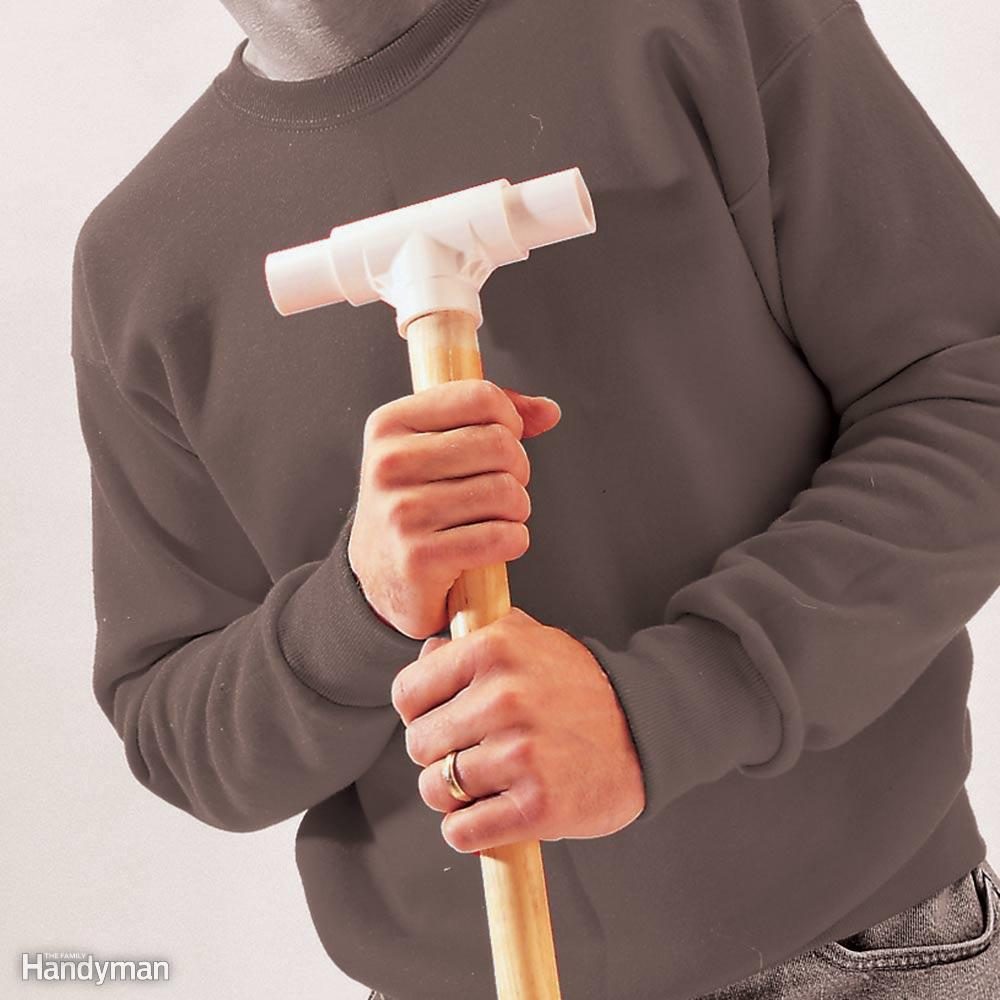 Get a better grip on your straight-handled shovel by epoxying a 1-in. PVC tee to the end. 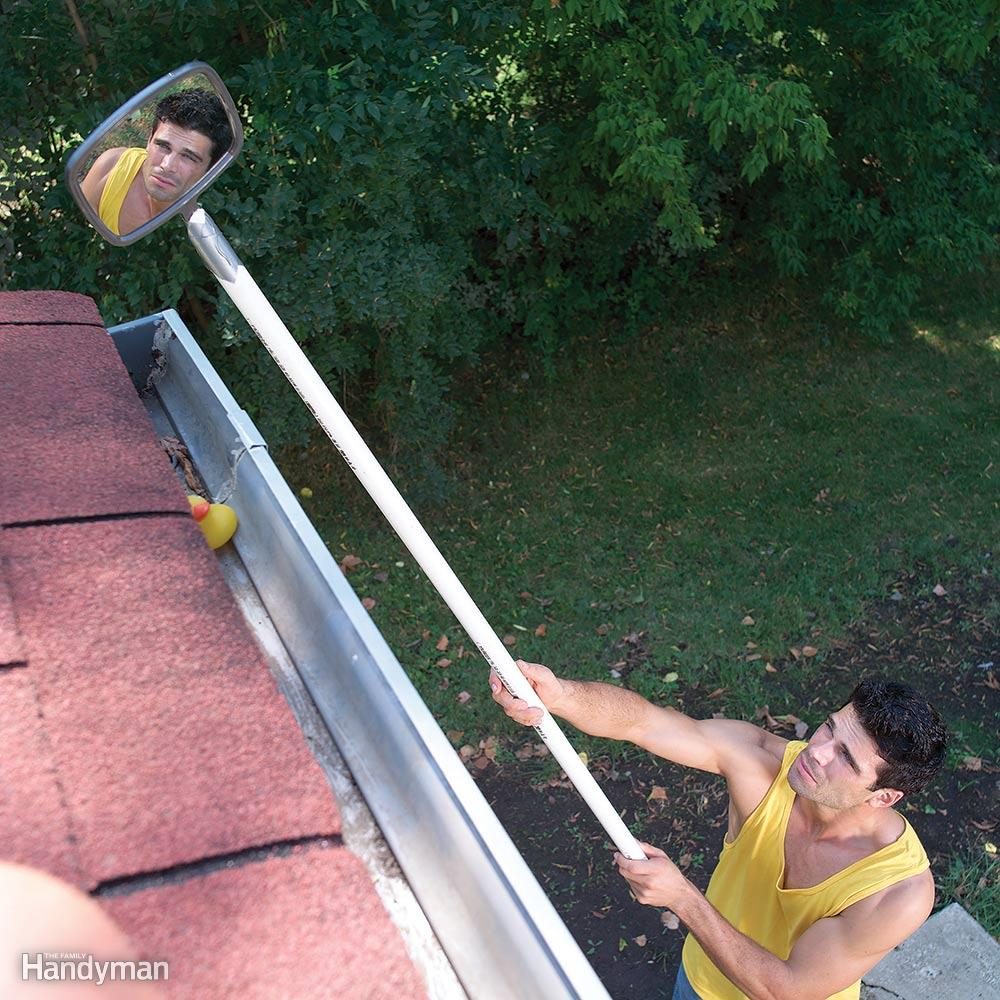 Here’s a quick and easy way to eyeball rain gutters for possible clogs—before the next downpour causes an overflow. Cut a 60-degree angle on the end of a piece of PVC pipe and tape a hand mirror to the angled end. Hoist the mirror above the gutter to spot leaves and mini jams. If you notice that your walls are damp, this is likely what’s wrong.

Help keep your home office space organized by using PVC pipe to hide cords. Just wrangle all those computer, mouse, monitor and phone cords and hide them in some PVC pipe. You can even use some colorful tape to match your office décor. These home improvement fails will make you cringe.

Drawer organizers on the cheap

Slit some up PVC pipe down the middle and you’ve got stackable drawer organizers to keep all your small tools handy. Check out these other simple solutions for everyday organization problems. 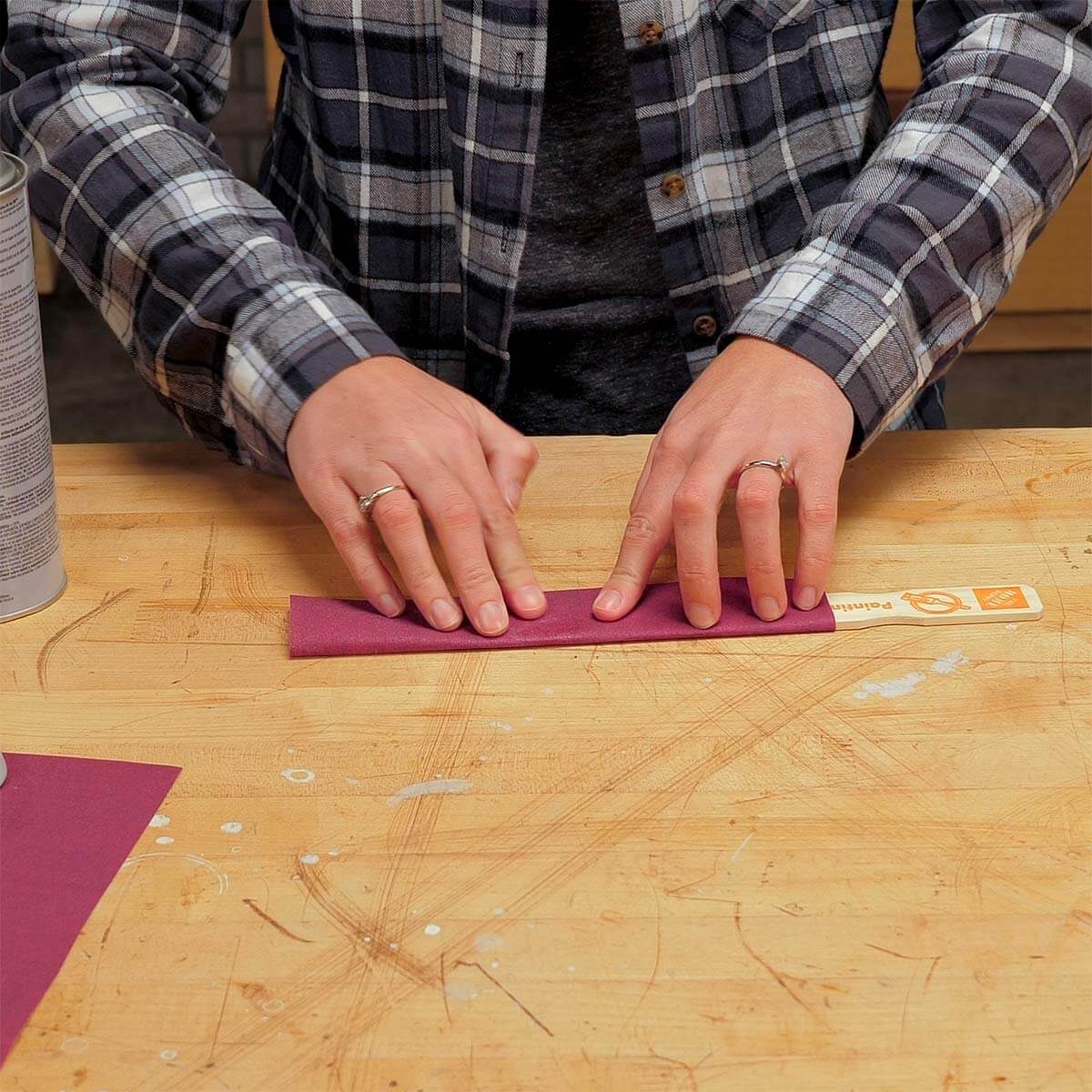 This woodworking file comes in handy for sanding in tight spaces. Cut a piece of sandpaper to fit around a paint stir stick. Then use spray adhesive or an all-purpose glue to adhere it to the stick. Write the sandpaper grit on the handle of the stir stick, if you plan to store it for later use. Check out the more detailed how-to. 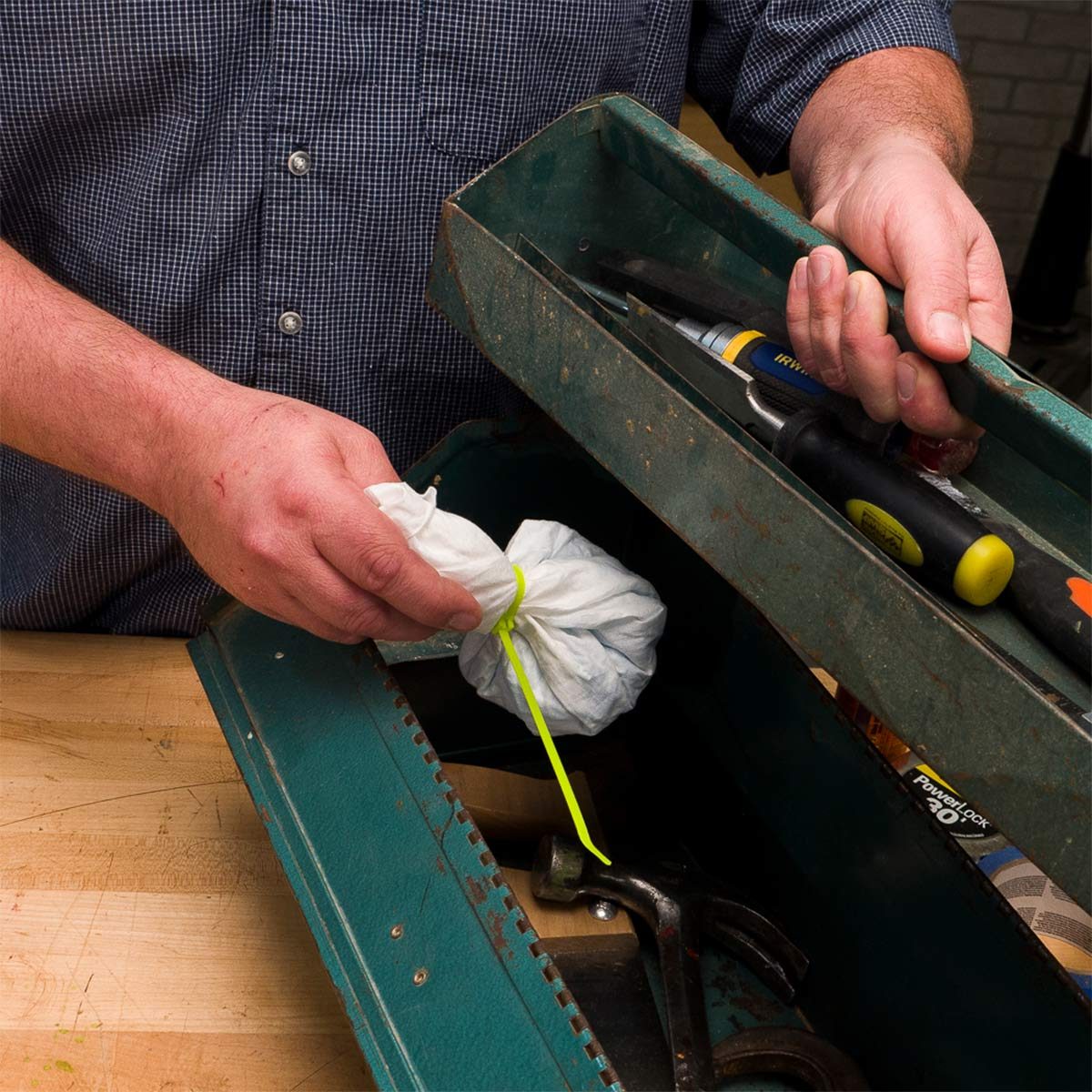 Make a rust-preventing pouch for your toolbox with a scoop of silica crystal kitty litter, a piece of breathable fabric, and a zip tie. Toss it in your toolbox to keep out excess moisture and protect your prized possessions. 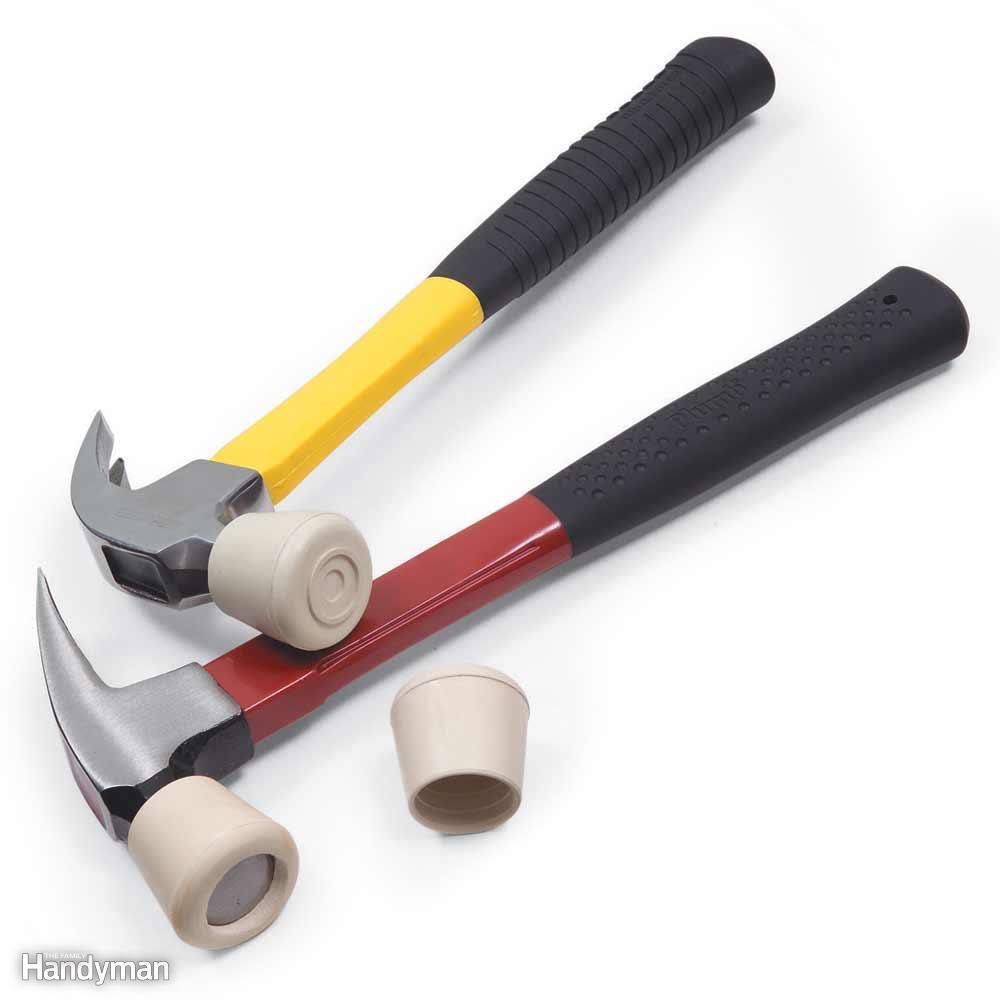 A rubber chair leg cap instantly converts a hammer into a rubber mallet. And if you want to drive a nail without denting the surrounding wood, cut a hole in the rubber cap. Pound until the rubber strikes wood, then finish driving the nail with a nail set. A 1-1/8-in. rubber cap fits tightly over most hammers and costs about $1 at home centers and hardware stores. Here are some more secret tool tips every DIYer should know. 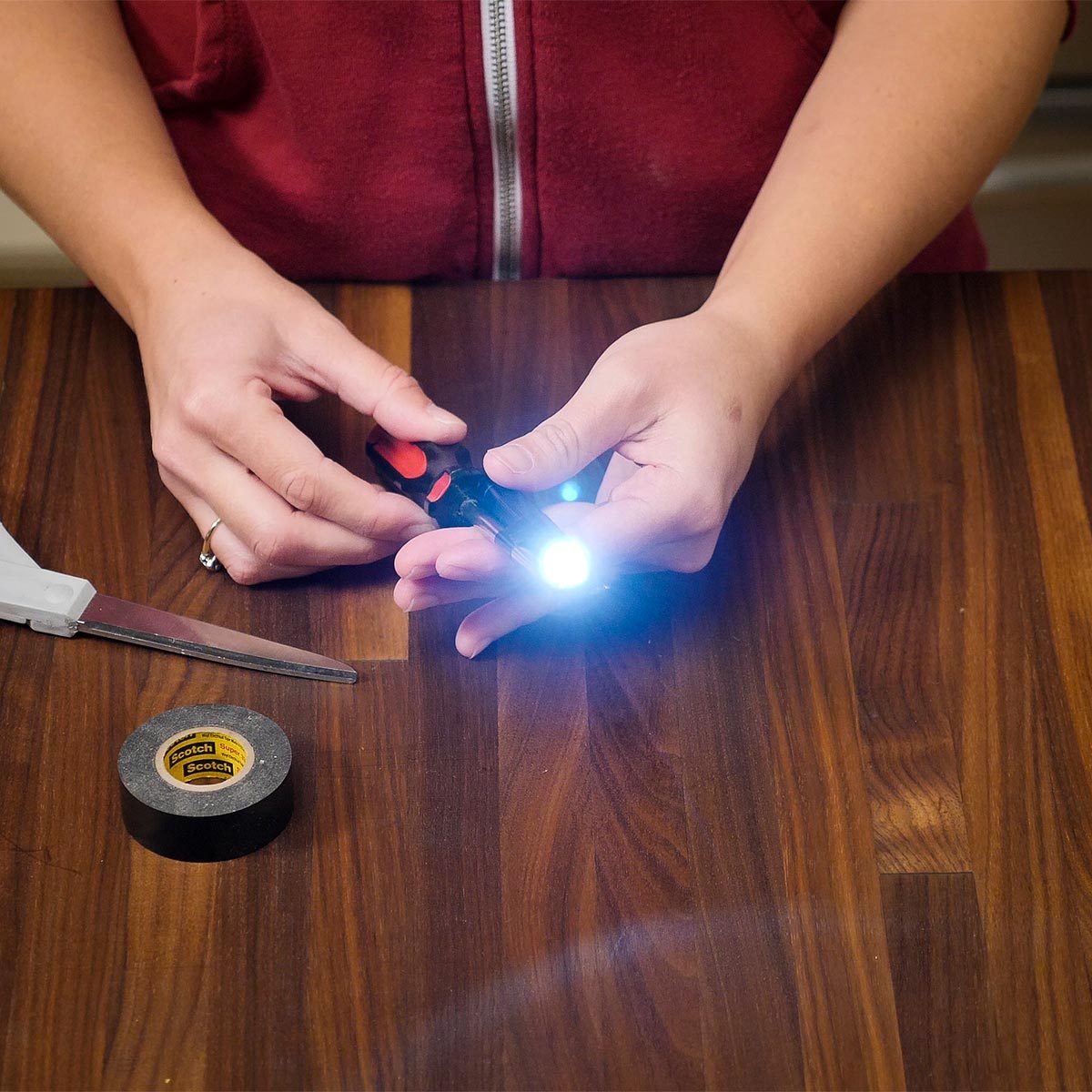 No need for fancy hand tools with built-in LED lights—opt for this lighted screwdriver hack instead. When working in a dark space such as inside a cabinet, make your own lighted screwdriver by taping a keychain-size flashlight to the shaft. It’ll shine the light right where you need it. Read the more detailed how-to. 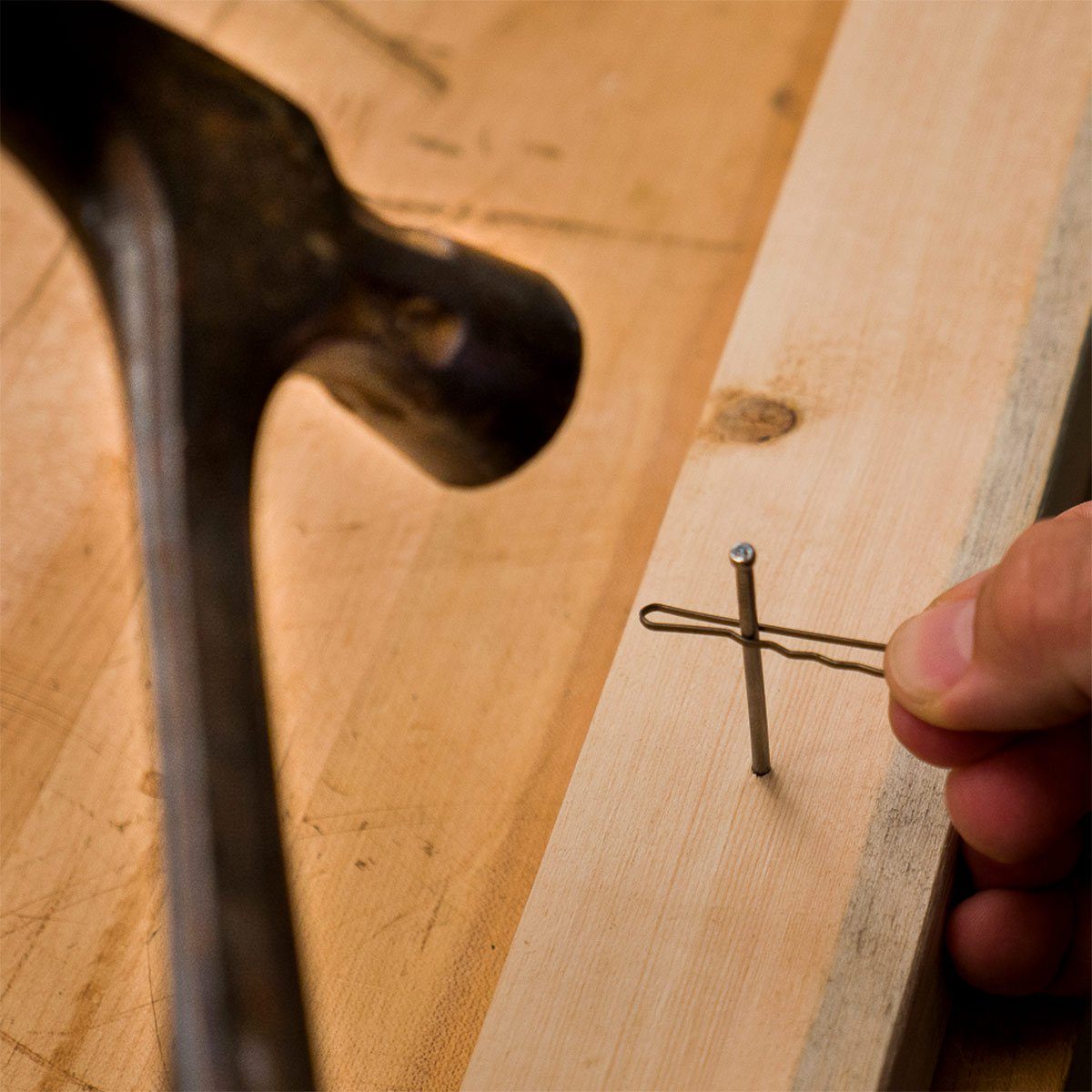 There’s no need to risk hammering a finger when working with tiny nails or in tight quarters. A common bobby pin makes a great nail holder—and keeps your fingers at a safe distance! Once the nail is started, remove the bobby pin and continue hammering away. Here’s the tutorial. 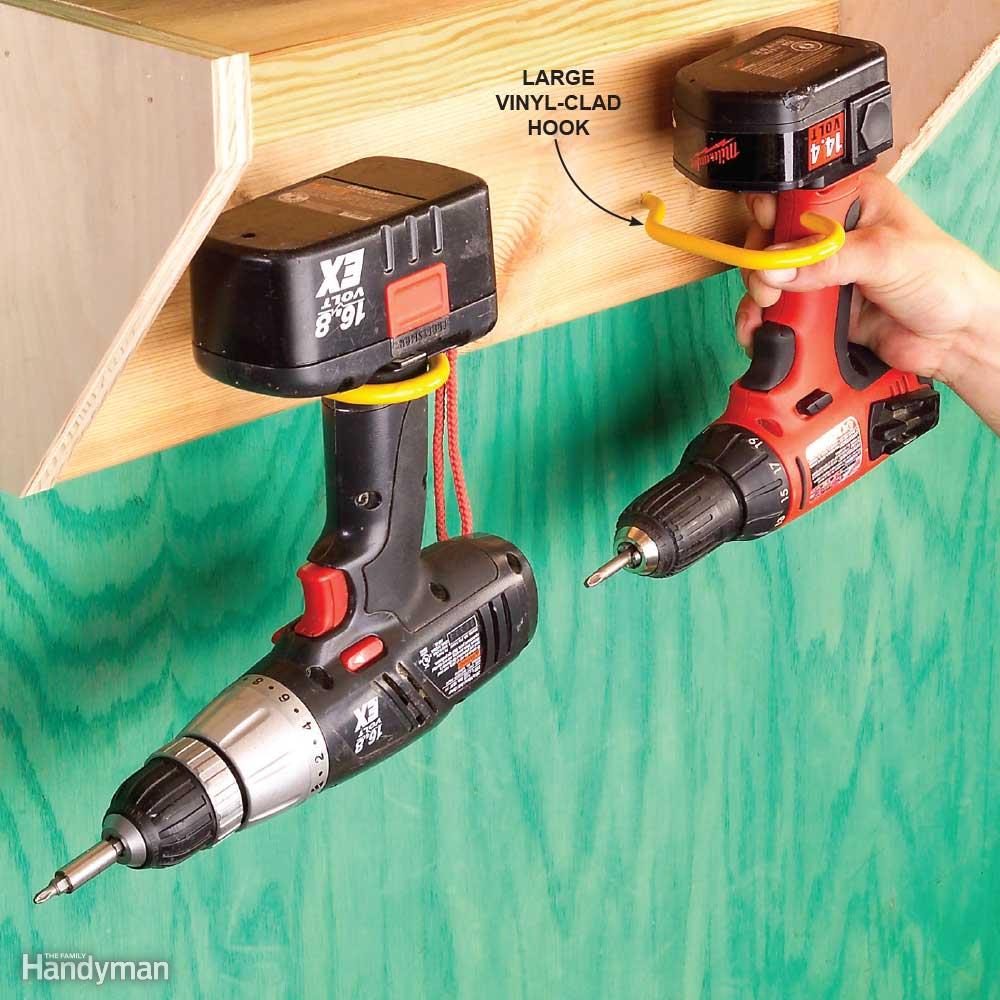 Those big hooks that are often used to hang bikes also make slick drill hangers. Get them at any home center for a couple of bucks apiece. Check out these other simple life hacks for organizing your home. 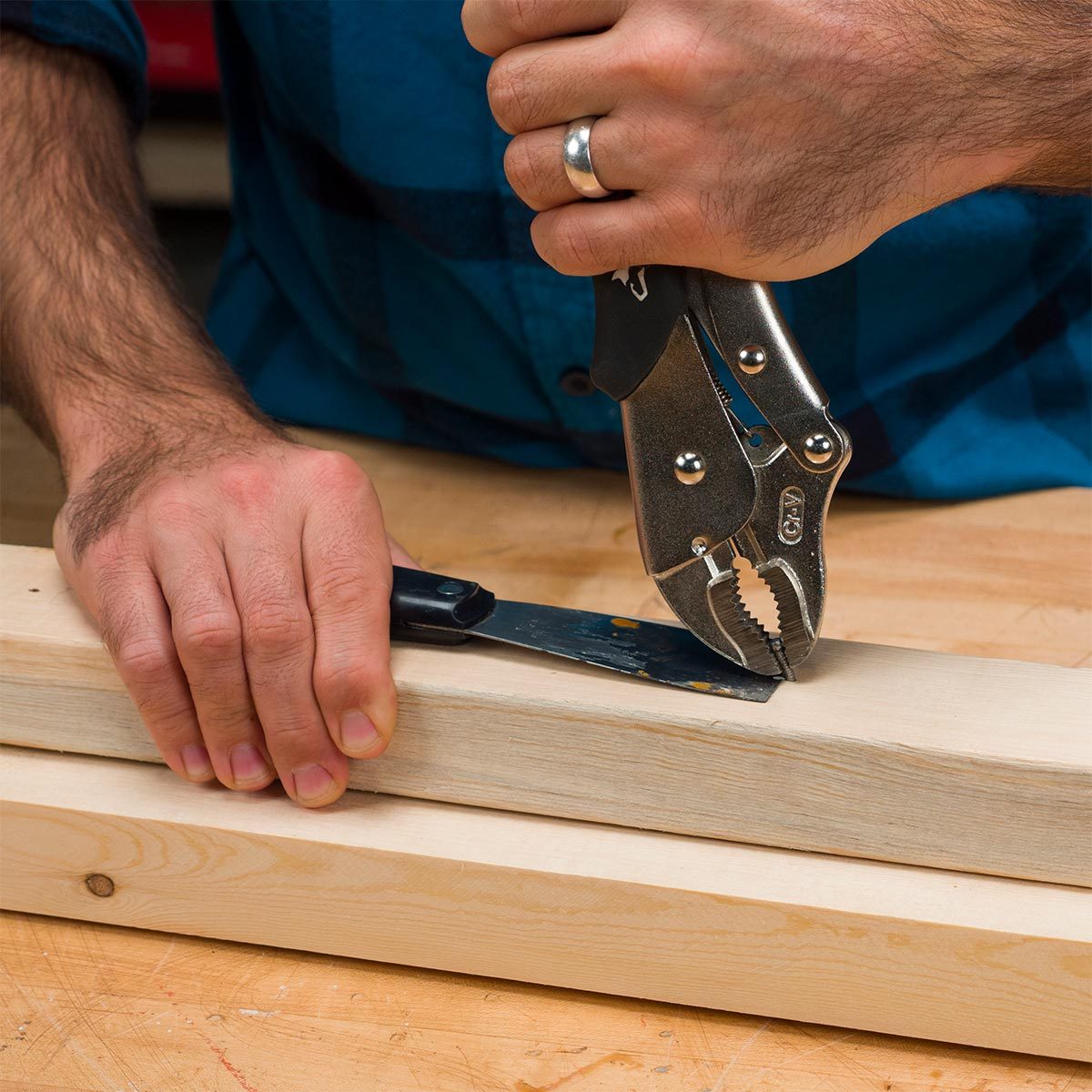 Vise-Grip pliers make great nail pullers. The tool locks onto the nail, creating a secure hold, and the curve of the head provides excellent leverage. Use a putty knife under the pliers if you plan to salvage the material after removing the nails. Here’s the full tutorial. 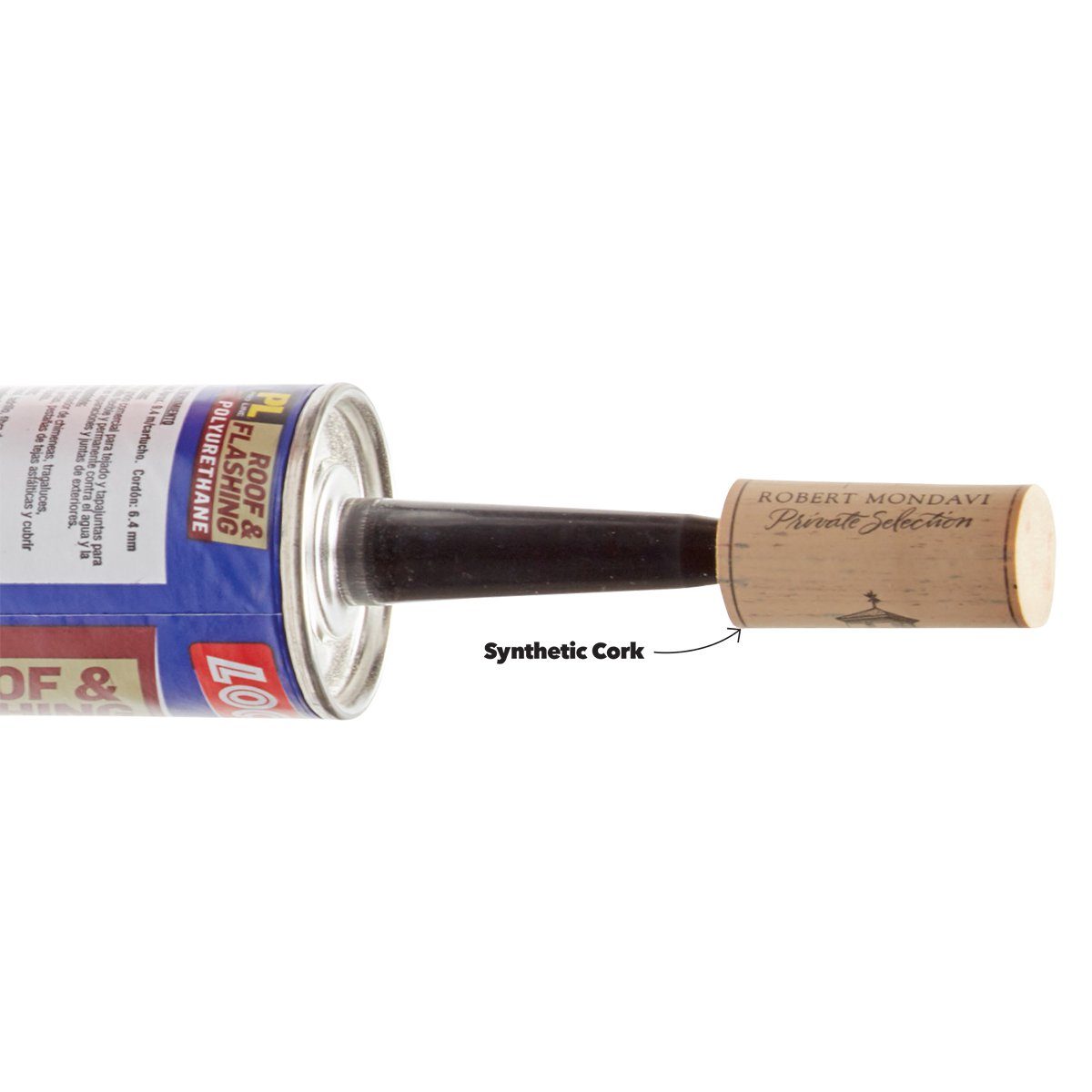 Synthetic wine corks are great for sealing partially used tubes of caulk. Drill a 5/16-in. hole into the cork about 1 in. deep. The cork fits perfectly and makes an airtight seal. —Susan Claussen 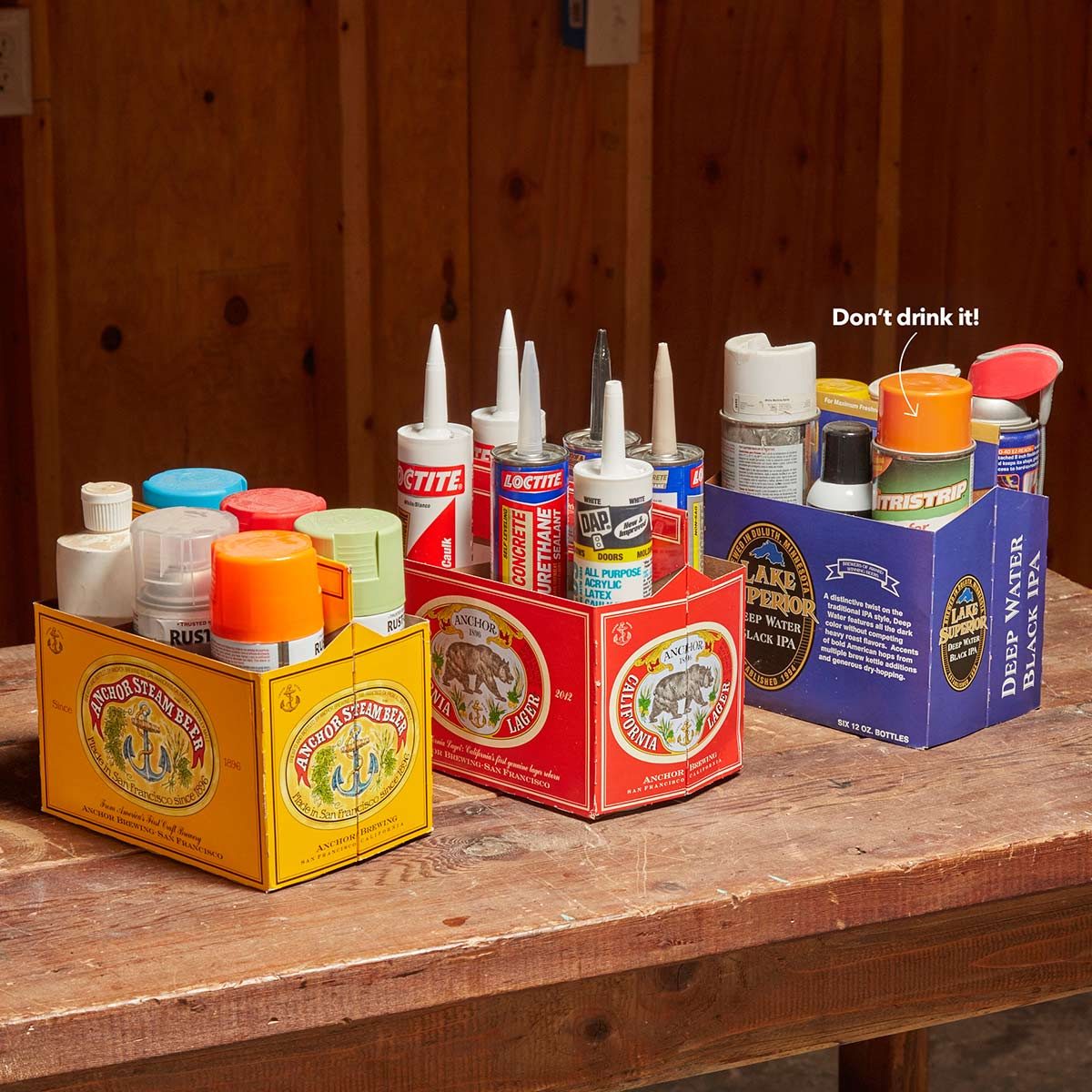 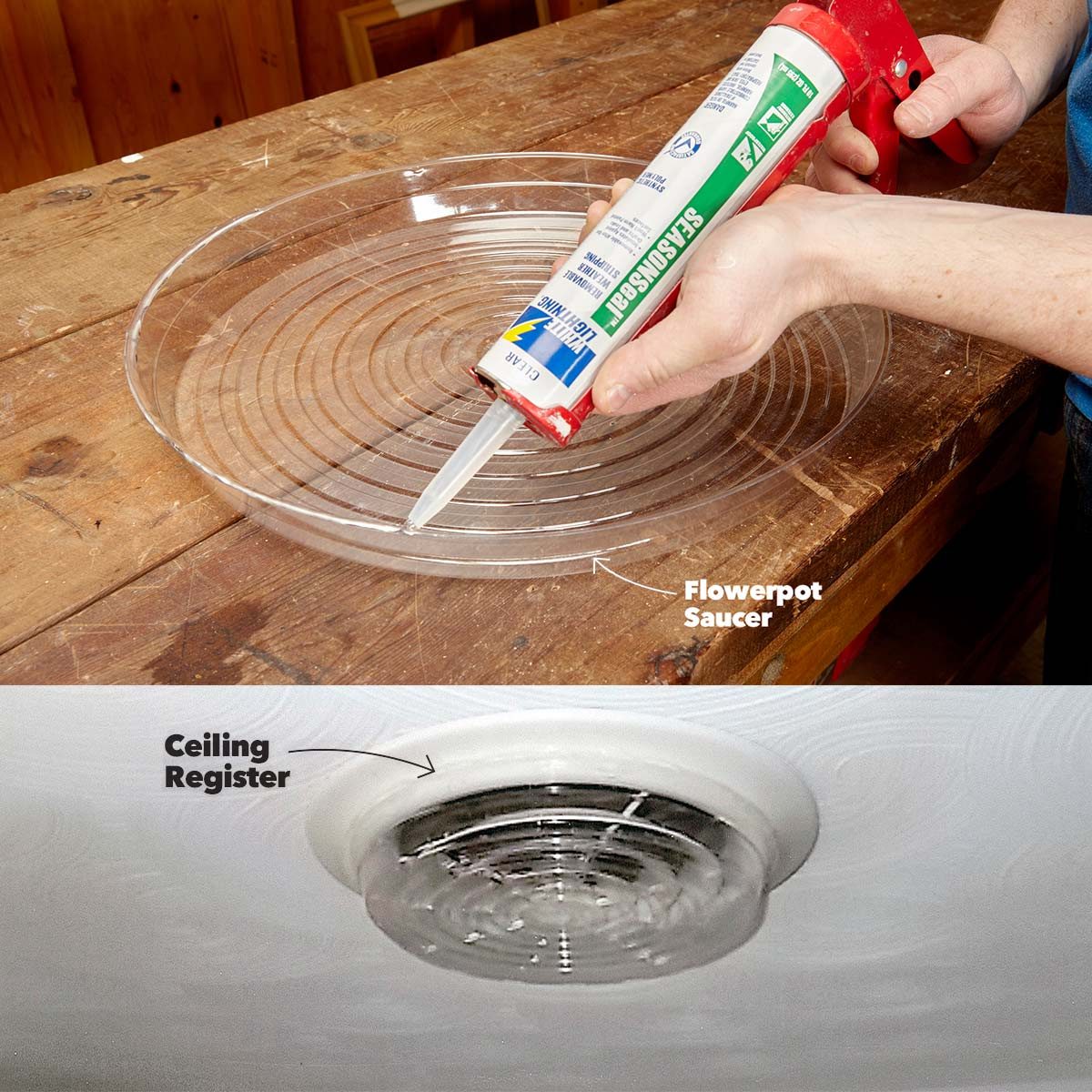 My house has round ceiling registers for the air-conditioning system. In the winter, we’d get cold air falling from the registers. Rather than put up with the drafts, I sealed the registers with those clear plastic saucers that you put under flowerpots. I temporarily glued them in place with White Lightning SEASONSeal Clear Removable Weather Stripping ($5). It’s a rubbery sealant that you apply with a caulk gun and peel off in the spring. —James Herrrenknecht 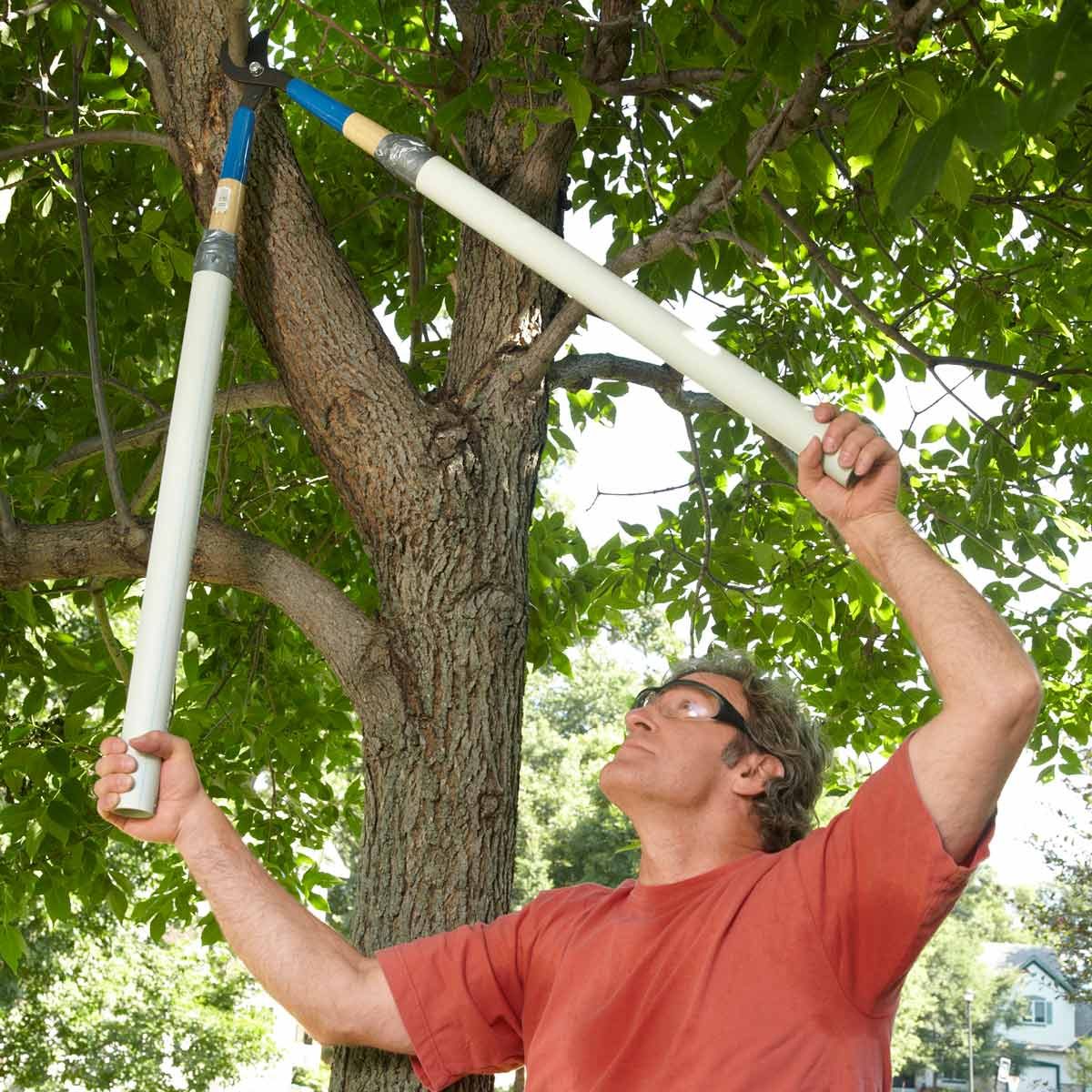 Slip PVC pipes over the handles of your pruning shears and tape them in place to extend your reach and clip high branches without a ladder. 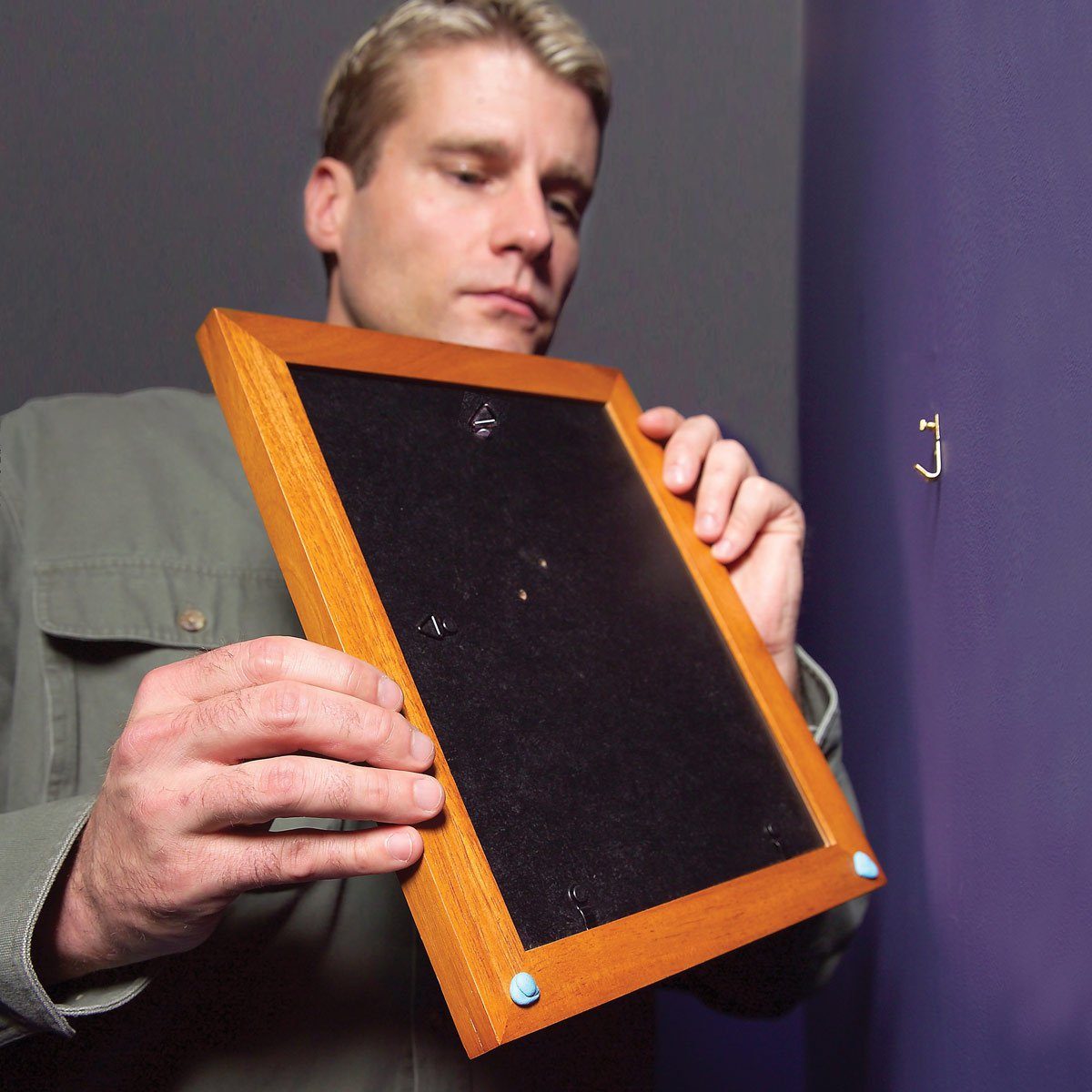 A pinch of mounting putty (that sticky stuff used to hang posters) prevents picture tilt without harming walls. Here are some more DIY home improvement projects you can do without calling the pros. 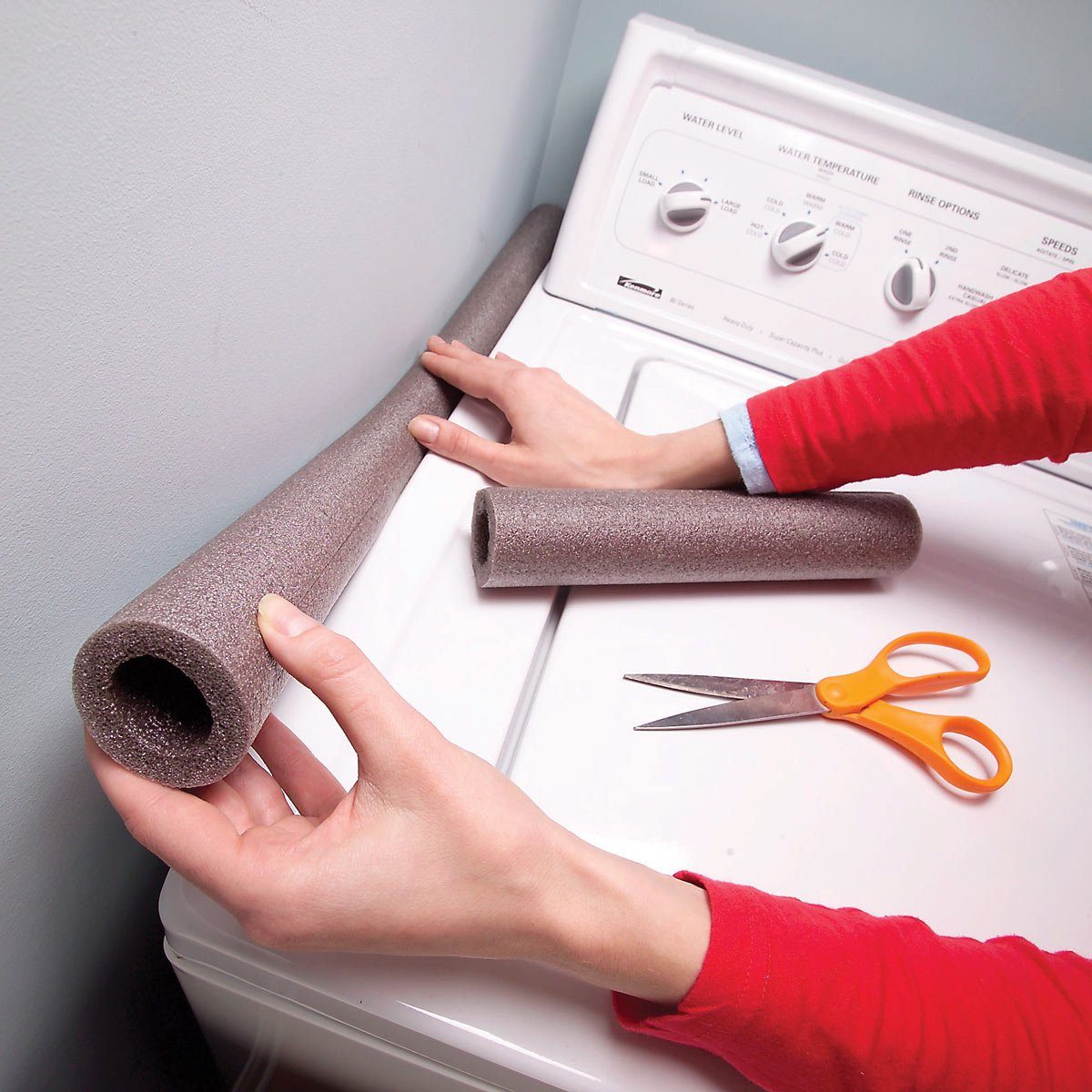 Stuff a strip of foam pipe insulation into the space between your washer and dryer or along the wall. That way, socks can’t slip into the abyss. 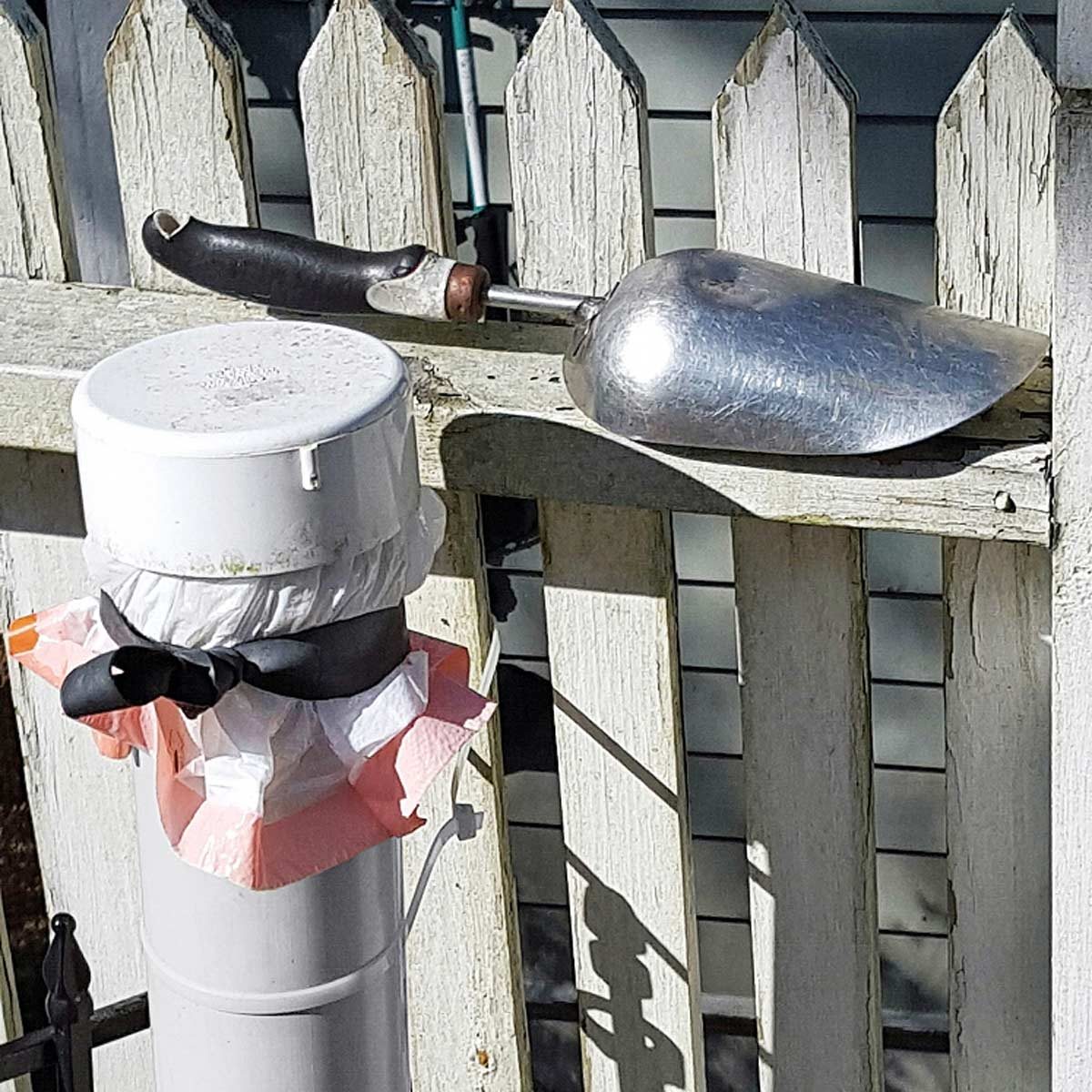 My dogs and I have an arrangement. They poop; I pick it up. But rather than make daily trips to the trash can, I built this poop pipe. It’s just a large piece of 4-in. PVC drainpipe sunk into the ground a foot or so, with a trash bag lining it and a cap sitting loosely on top. A rubber band holds the bag in place, and the cap helps keep odors at bay. When the bag gets full, I just take it to the trash bin and put a new one in the drainpipe. —Kelley Griswold. Here are some more simple cleaning tips every dog or cat owner should know. 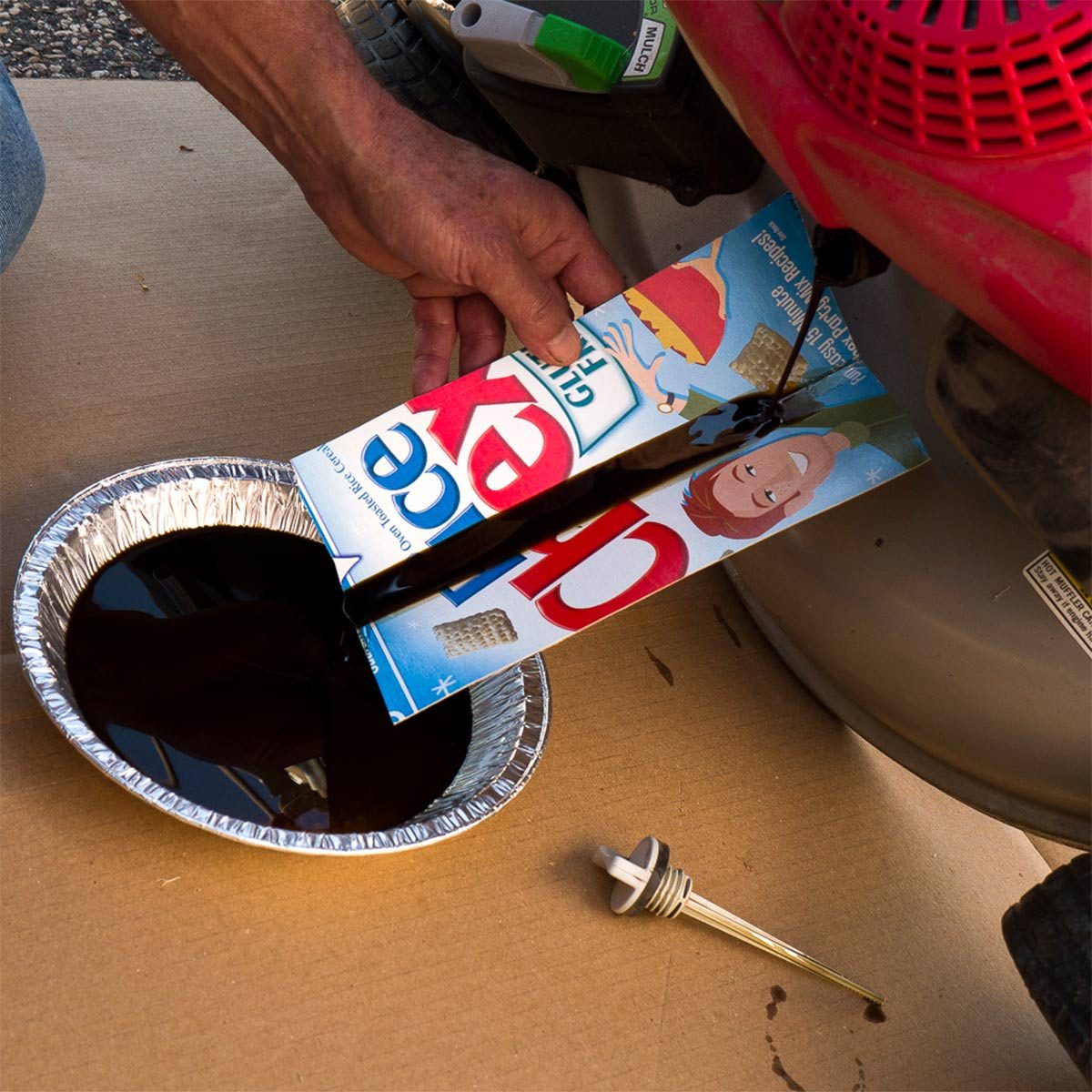 Make changing the oil in your lawn mower, snowthrower, and outdoor machines less messy with this handy hint: Cut off a piece of an empty cereal box and fold it into a trough. Then tip the machine and use the trough to guide the oil into the waste pan. The glossy coating on the cereal box keeps the oil from soaking through. Check out the more detailed tutorial. Next, read on for 17 clever home improvement ideas for under $200.