23 Hotels with the Best Views of Fourth of July Fireworks

Independence Day is a time of celebration and patriotic camaraderie. After your barbecue, picnic, or cookout, gather with friends in these amazing hotel rooms, suites, and terraces to catch the fireworks as they light up the night sky. (Don't worry, if you miss it this year, you know which rooms to book for 2020.) 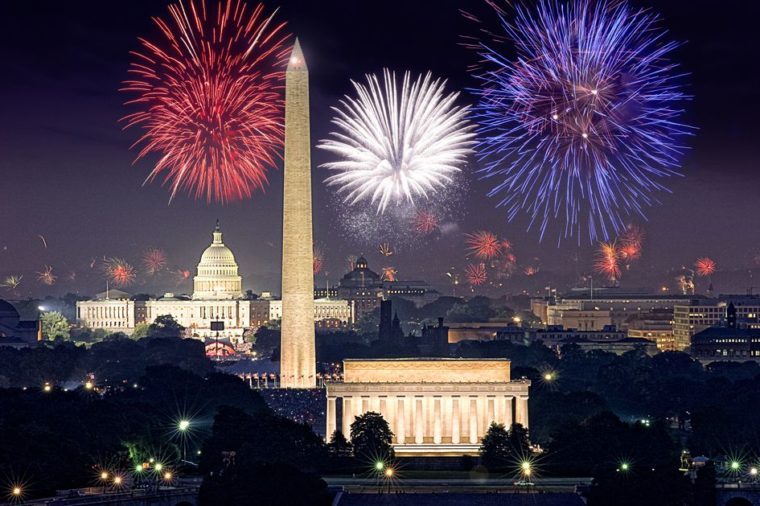 Let’s start in the nation’s capital at the JW Marriott Washington D.C., where booking a high-floor, JW Premium room (especially those that end in -31) gives you incredible views. Capture the majesty of the nation’s premier fireworks show with the Washington Monument and Lincoln Memorial in the backdrop. Talk about Instagram worthy! In case you didn’t know, this is the real reason we set off fireworks for the Fourth of July. 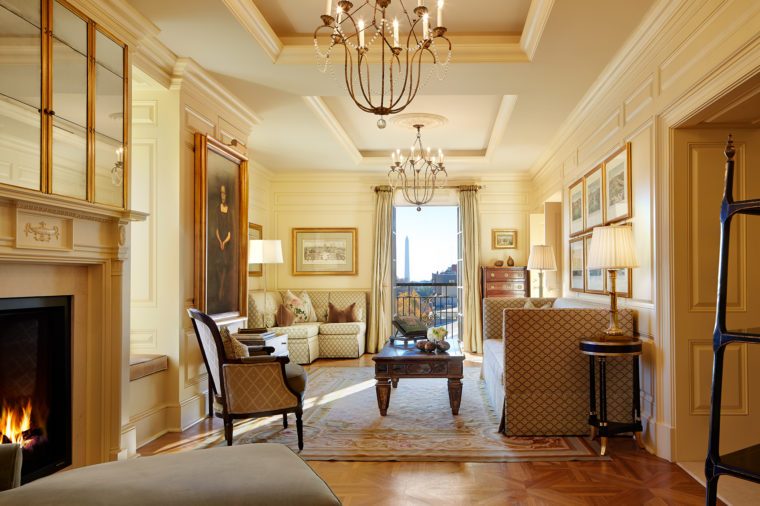 A night in the Thomas Jefferson Suite at The Jefferson affords five private Juliet balconies overlooking the Washington Monument. From this vantage point, you can’t miss one of the most important fireworks celebrations in the country. When you tuck yourself into bed, give a little nod to one of the nation’s founding fathers and author of the Declaration of Independence for whom the suite is named. 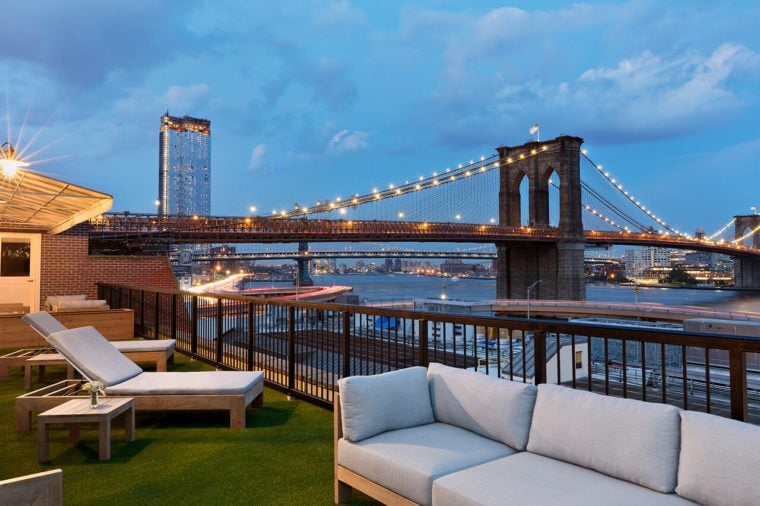 Book the Mr. C Suite (room 705) at Mr. C in New York for amazing views of the Macy’s Fourth of July Fireworks show. The Signature Suite (room 606) and Front Street Premier Rooms (rooms 604, 605, and 703) a​lso have terraces overlooking the Brooklyn Bridge and East River for maximum exposure to this festive display. 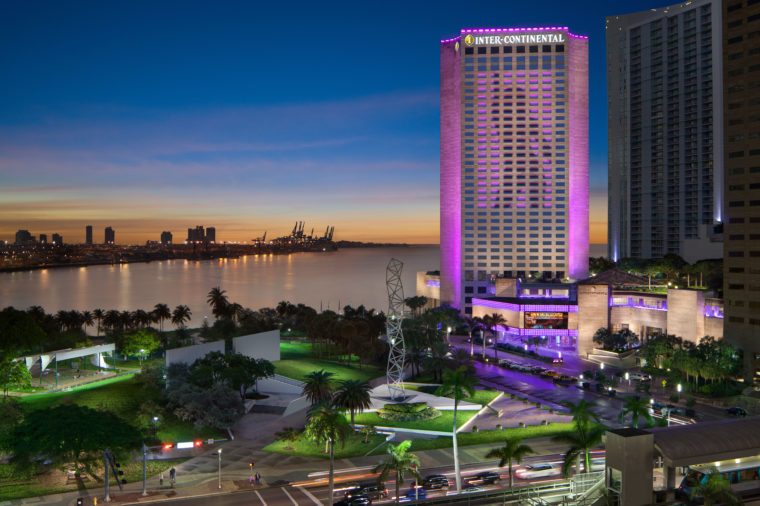 Room 2901 at the InterContinental Miami

This bay-facing room offers full-frontal views of the InterContinental Miami’s own fireworks display taking place over Biscayne Bay. Guests can also splurge on the two-floor Royal Palm Presidential Suite designed by tennis icon Venus Williams if they are looking to impress on this national holiday. The building is an icon in the Miami skyline known for the projected light show on its facade each night. 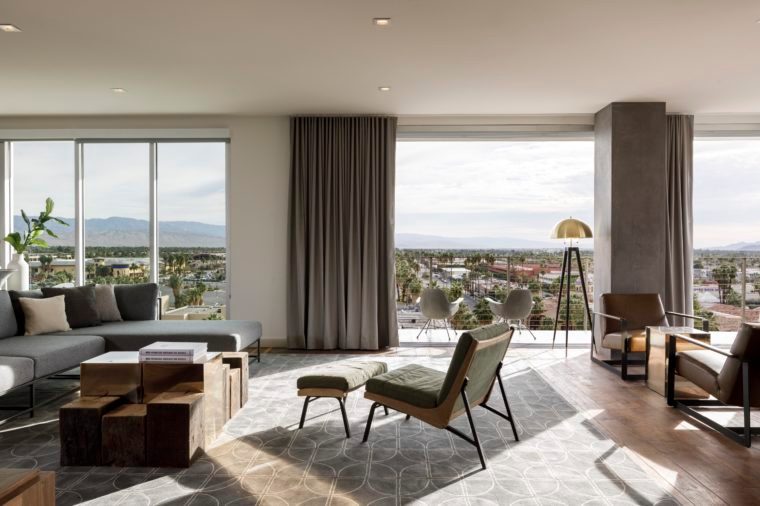 On the outdoor terrace of the Jacinto Room’s event space at Kimpton The Rowan, guests can enjoy fireworks against the backdrop of Coachella Valley and the San Jacinto Mountains. Since light pollution is minimal and this is the tallest building around, you can guarantee a solid view. The hotel even hosts a viewing party open to the public on July 4th. 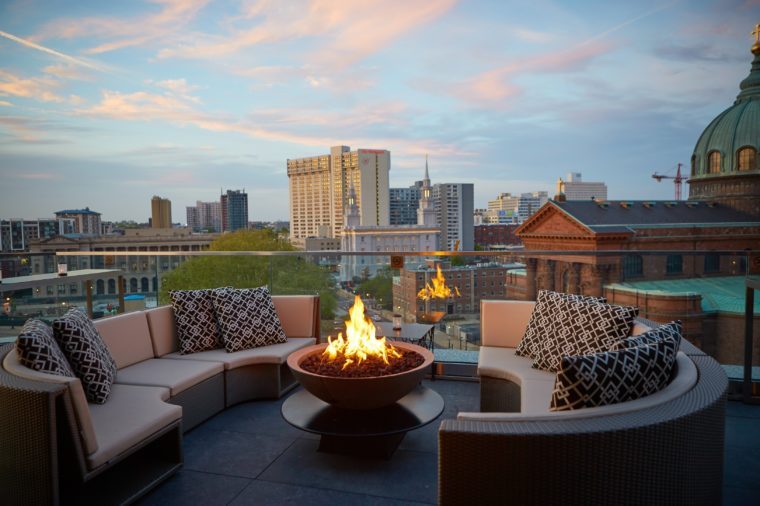 Presidential Suite at The Logan, Philadelphia

The private balcony of the Presidential Suite at The Logan comes with a Parkway view overlooking the Philadelphia Museum of Art. America’s birthplace proves to be a fitting locale from which to watch a vibrant fireworks display, and this suite’s terrace is in the center of it all. The Logan is a Curio Collection by Hilton property and in the heart of Logan Square. Guests are steps away from the Parkway’s free July 4th concert and the block party plus can watch Philadelphia’s Historic District’s parade before returning to their birdseye view of the Wawa Welcome to America celebration. 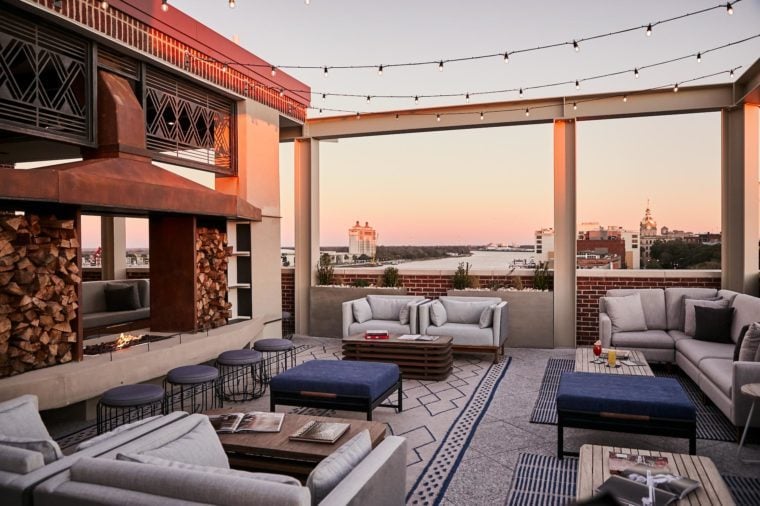 Feel like you are a part of the July 4th fireworks celebration when you stay in a River Studio Suite at The Alida Hotel, A Tribute Portfolio Hotel, in downtown Savannah. Even better, head for the rooftop terrace to get a panoramic view of the fireworks while sipping a craft cocktail after sunset and enjoying up-close river views. 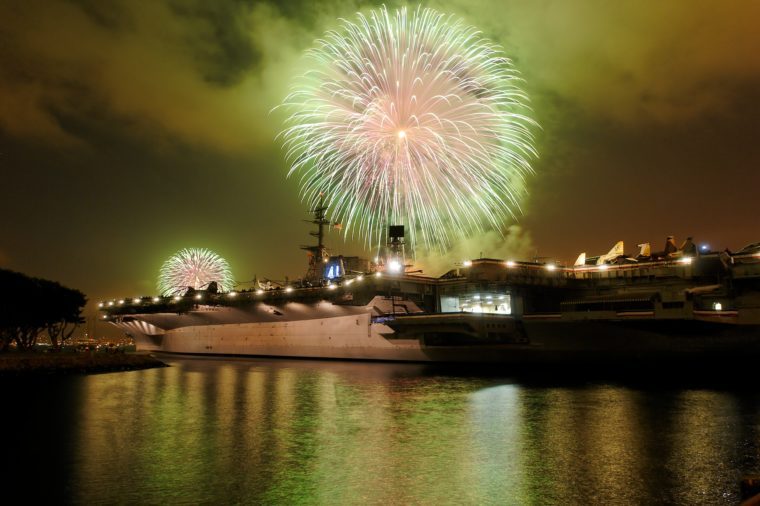 Enjoy the view of San Diego’s Big Bay Boom fireworks show, which is launched from four barges all around the bay at the InterContinental San Diego. Keep the experience for yourself or host up to 15 people with a catered package including drinks and snacks organized by the hotel. No matter what floor you’re on, this newly opened hotel will have up-front-and-center views. 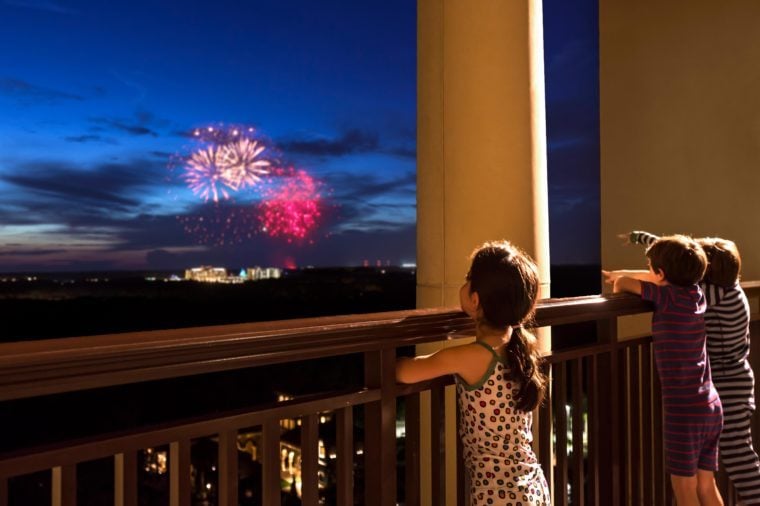 Reserve a Park View room like 924 at Four Seasons Resort Orlando at Walt Disney World Resort to enjoy the nightly fireworks display from the nearby Magic Kingdom Park and Epcot. In fact, there are 11 floors of Park View rooms meaning that there are plenty available. The July 4th display is sure to be even more dramatic and patriotic. When traveling with kids, this high-floor balcony is sure to please (especially if you order up ice cream sundaes to go with it). Disney World is our favorite place in all of Florida for Independence Day fireworks. 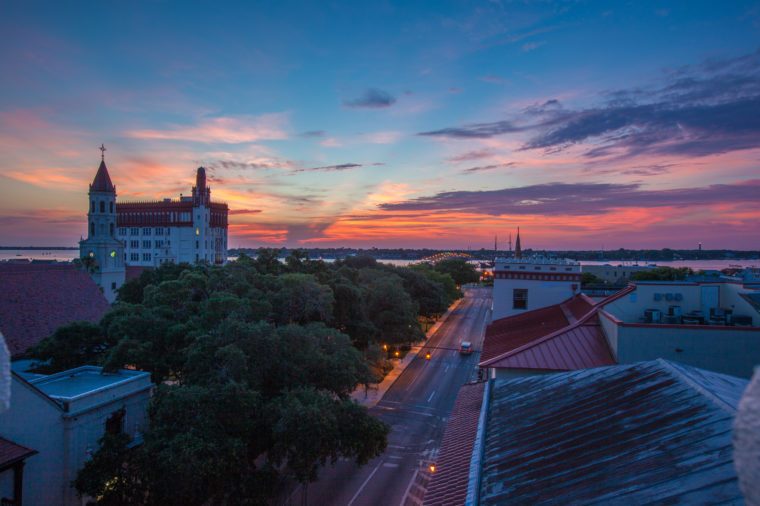 Travel to the oldest city in America, St. Augustine, Florida, for one of the biggest fireworks displays on the east coast. The Ponce Suite at Casa Monica Resort & Spa, a member of Marriott’s Autograph Collection and part of The Kessler Collection of hotels, will wow visitors with its wide-open views of Matanzas Bay. 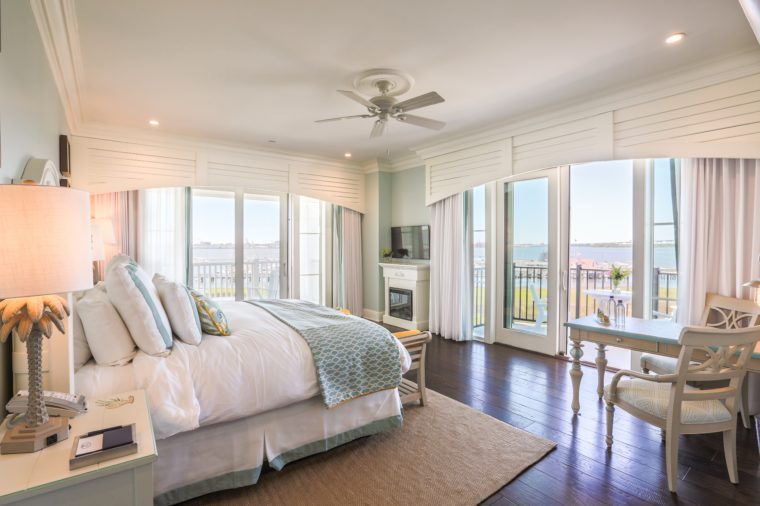 With the Arthur Ravenel Bridge and WWII Aircraft Carrier USS Yorktown as the backdrop, anyone staying in room 1326 will have a fireworks display to remember. Seersucker robes are the perfect way to cozy up after spending a warm evening on one of two balconies of this charming room at The Beach Club at Charleston Harbor Resort and Marina, a member of The Leading Hotels of the World. Situated across the harbor with Charleston’s steeple-lined skyline, the fireworks are sure to illuminate the entire waterfront view. 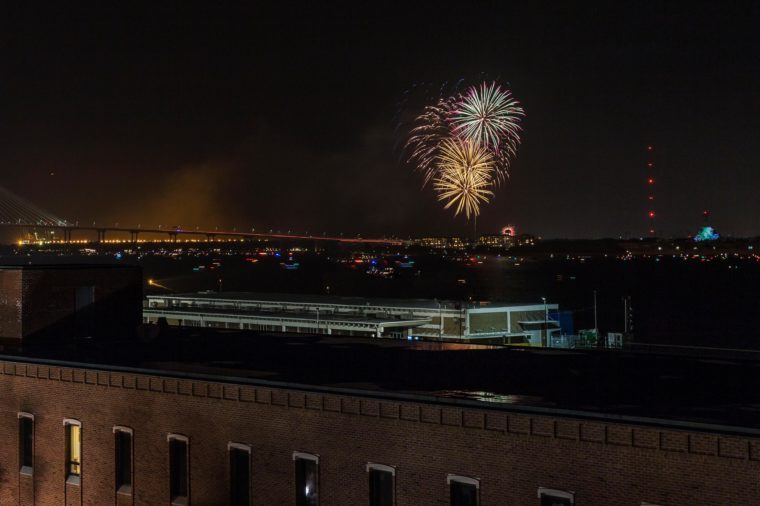 The Grand HarbourView rooms 401-404 offer the perfect view of fireworks from the other side of the harbor in the heart of the Historic District. HarbourView Inn also offers a private rooftop terrace for more unobstructed viewing of the show directly across the water at Patriot’s Point. Don’t forget to kick off the evening at the hotel’s complimentary happy hour where wine, fruit, and cheese are available to guests.
Book now 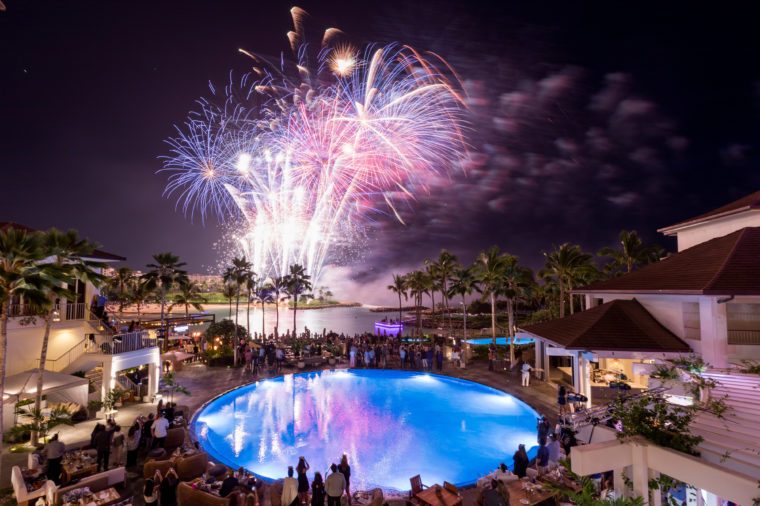 The unbeatable view of July 4th fireworks from a Penthouse Suite at Four Seasons Resort Oahu will get you in the right mood. A large terrace from this 17th-floor vantage point provides excellent views of the resort’s fireworks display over Lagoon 1. There’s even enough space to invite a few friends over so you can say “cheers” to the occasion. It’s not all about fireworks on the Fourth; find out how else the Aloha State celebrates Independence Day. 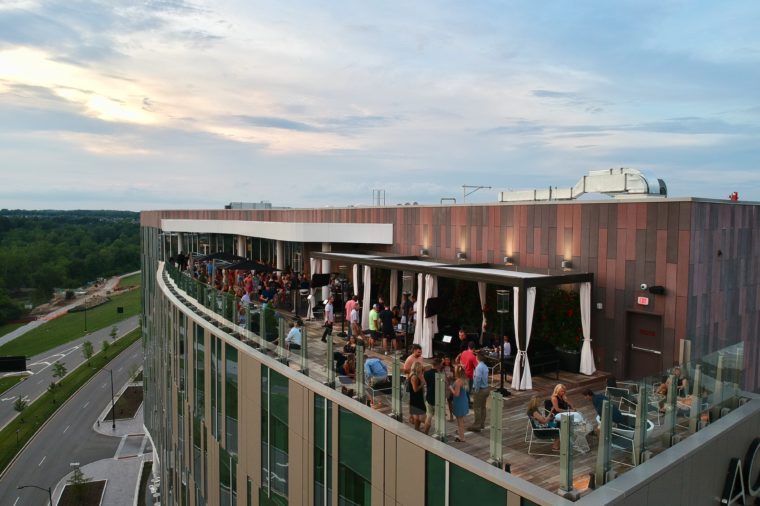 Book corner suite 719 at the AC Hotel Columbus Dublin, or better yet, the rooftop bar and patio to get the ideal view over the Scioto River and the July 4th fireworks set off near downtown Dublin. This charming town near the Ohio capital of Columbus has a huge celebration each year. This year, headline performers include Grammy award winners Chaka Khan and Michael McDonald. 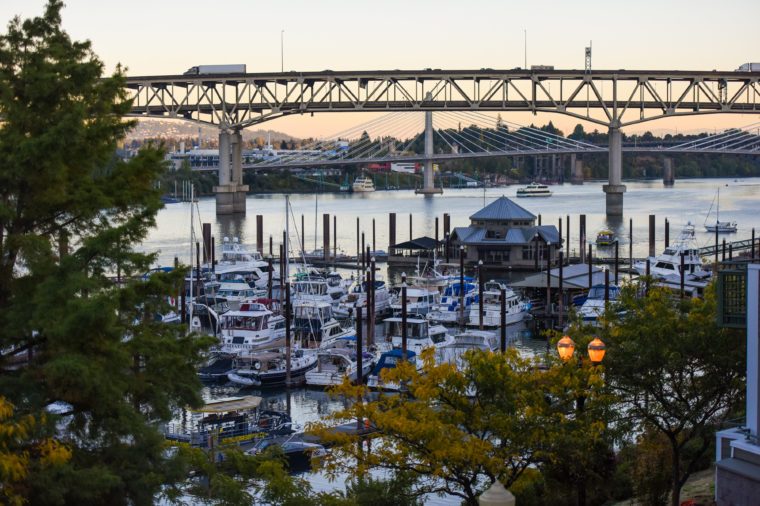 Get a room with a front-row seat to the annual Blues Festival that takes place in the city’s downtown Willamette River waterfront. Corner room 401 and the ten condos with private balconies at Kimpton RiverPlace Hotel in Portland, Oregon, are the perfect spot from which to see the fireworks show. 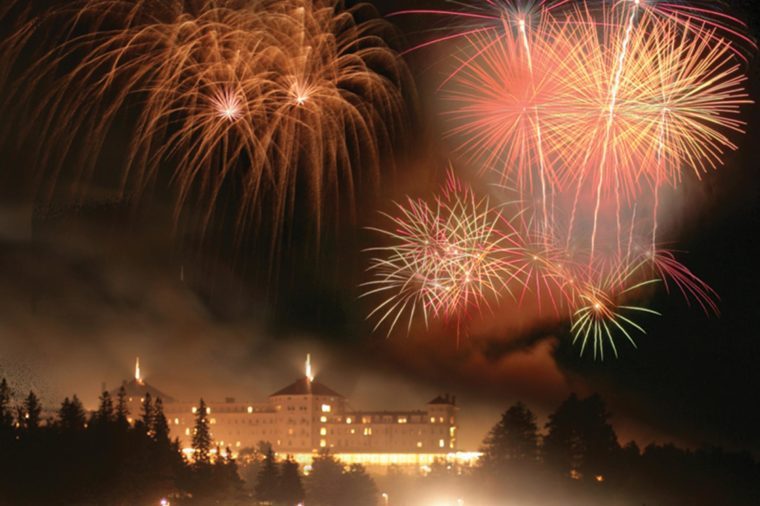 If you want to capture panoramic views of the celebratory fireworks from an outdoor patio, Tower Suite 402 at Omni Mount Washington Resort is the perfect New England choice. The suite is comprised of two towers (one for the living area and one for the bedroom) and looks out over the golf course and Presidential Range. 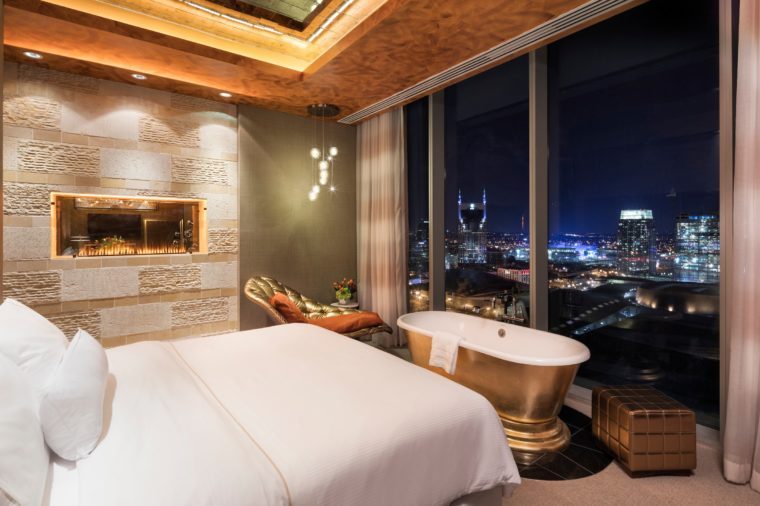 Soak in your golden tub as one of the country’s biggest fireworks displays unfolds before your eyes from the Broadway Suite at the Westin Nashville. If you want to be in the fresh air when the colors light up the sky, head to L27, the hotel’s open-air rooftop bar for more excitement. 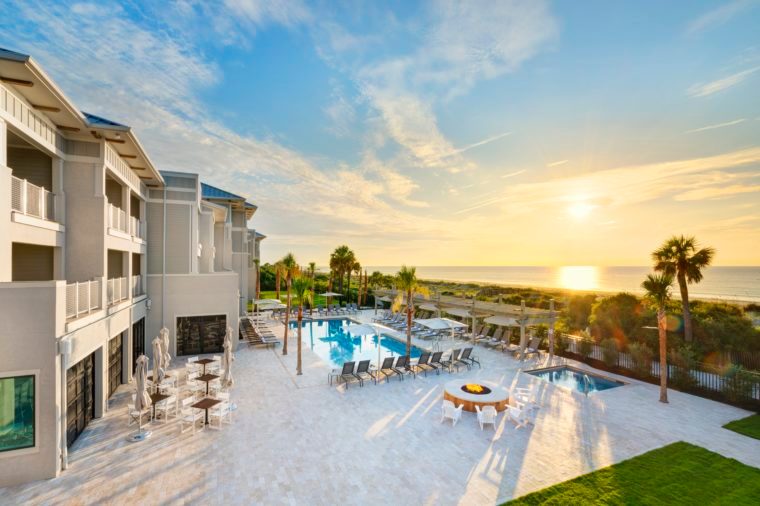 Watch the island’s own fireworks celebration from your private suite balcony at Jekyll Ocean Club, which is part of Jekyll Island Club Resort. A century ago, these grounds were a members-only retreat hosting the likes of the Rockefellers, Vanderbilts, and Pulitzers. Why not celebrate another national achievement when here? The country’s first transcontinental phone call took place between President Woodrow Wilson in Washington, DC, Alexander Graham Bell in New York, Thomas Watson in San Francisco, Henry Higginson in Boston, and AT&T President Theodore Newton Vail at Jekyll Island Club. 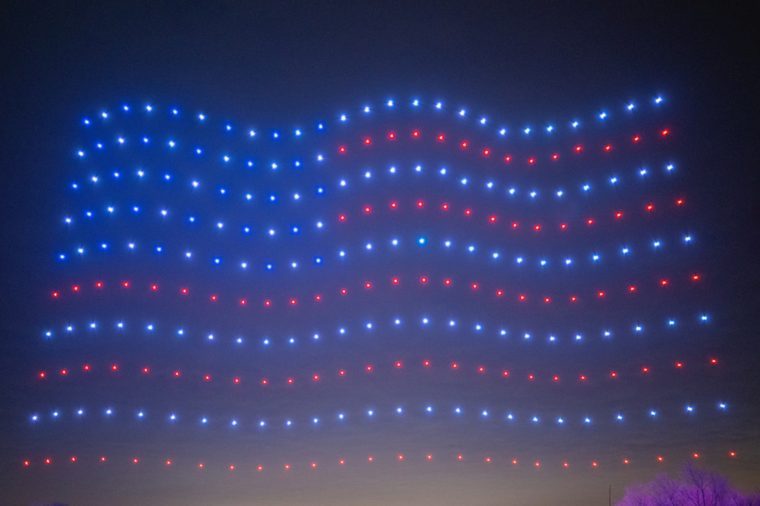 These aren’t fireworks, but perhaps they are even better. At South Coast Winery Resort & Spa in Temecula, California, the celebration steers clear of fireworks because they are harmful to the grapes in this wine-producing region. Instead, the property is hosting its first-time-ever patriotic-themed Independence Day Drone Light Show. Dozens of drones will fly in formation with colorful light displays creating crowd-pleasing formations to celebrate Independence Day. Some of the best views are from the Wine Makers Suites. 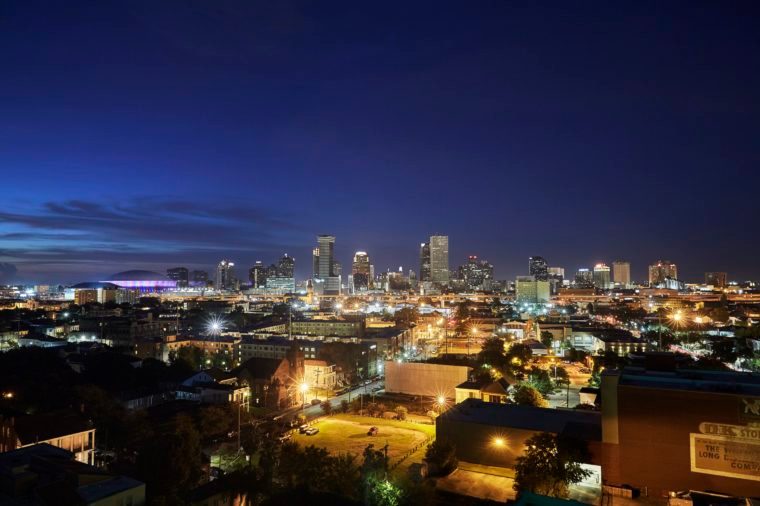 Among the many rooms to face downtown and the Superdome is room 1101 at The Pontchartrain Hotel in New Orleans. From this high vantage point, you can snap photos of the city’s vibrant fireworks display, which light up this exact view of the skyline as your backdrop. The best part is that you can stay in the air conditioning throughout it all! 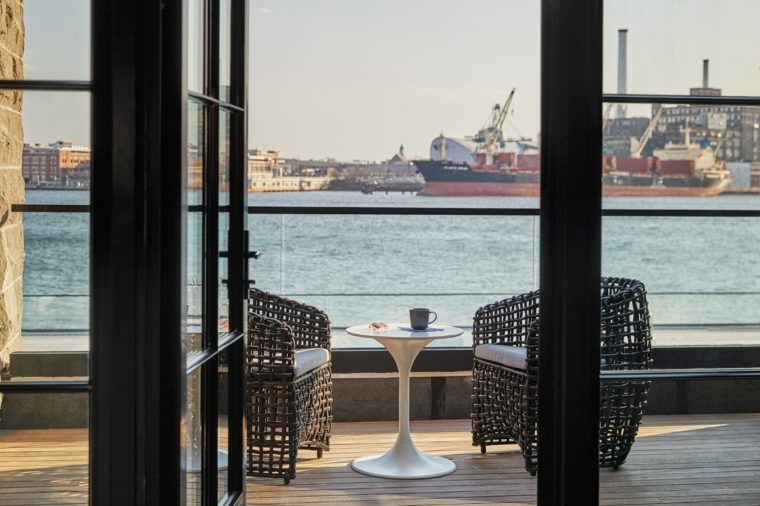 From this private balcony facing Baltimore’s Inner Harbor, you can watch fireworks being launched from a boat in the middle of the water. The Sagamore Pendry Hotel has an ideal location for sightseeing, but especially for fireworks viewing since you can hear and see all the action in the air (and again in the reflection of the shimmering water). 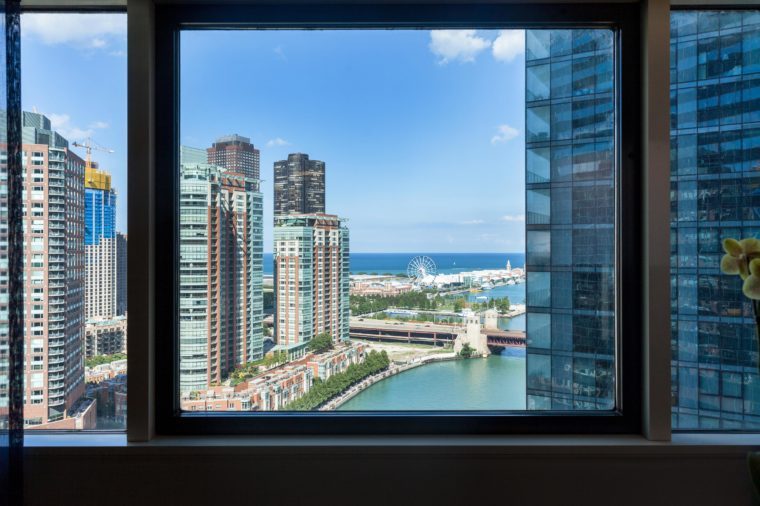 Navy Pier’s popular fireworks show will be front and center when you book room 4004 or any of the Lifestyle Lake View Suites and Executive Lake View Suites at the Swissotel Chicago. Not only is the hotel centrally located, but its height provides some of the best city views. 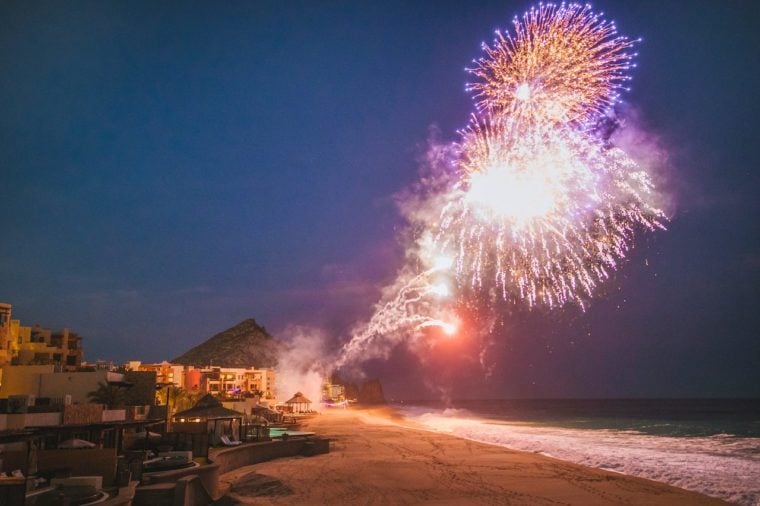 Courtesy The Resort at Pedregal

It’s not just in the United States where July 4th fireworks light up the night sky. Many other countries celebrate with us, especially those where a large number of Americans live and work. The Resort at Pedregal in Cabo San Lucas is one such place. Estrella Suites 241, 244, and 344 are just some of the accommodations overlooking the beach where celebratory fireworks are set off. Staying put for Independence Day? Here are some of our favorite ideas for hosting your own patriotic party.

Book now
Every product is independently selected by our editors. If you buy something through our links, we may earn an affiliate commission.